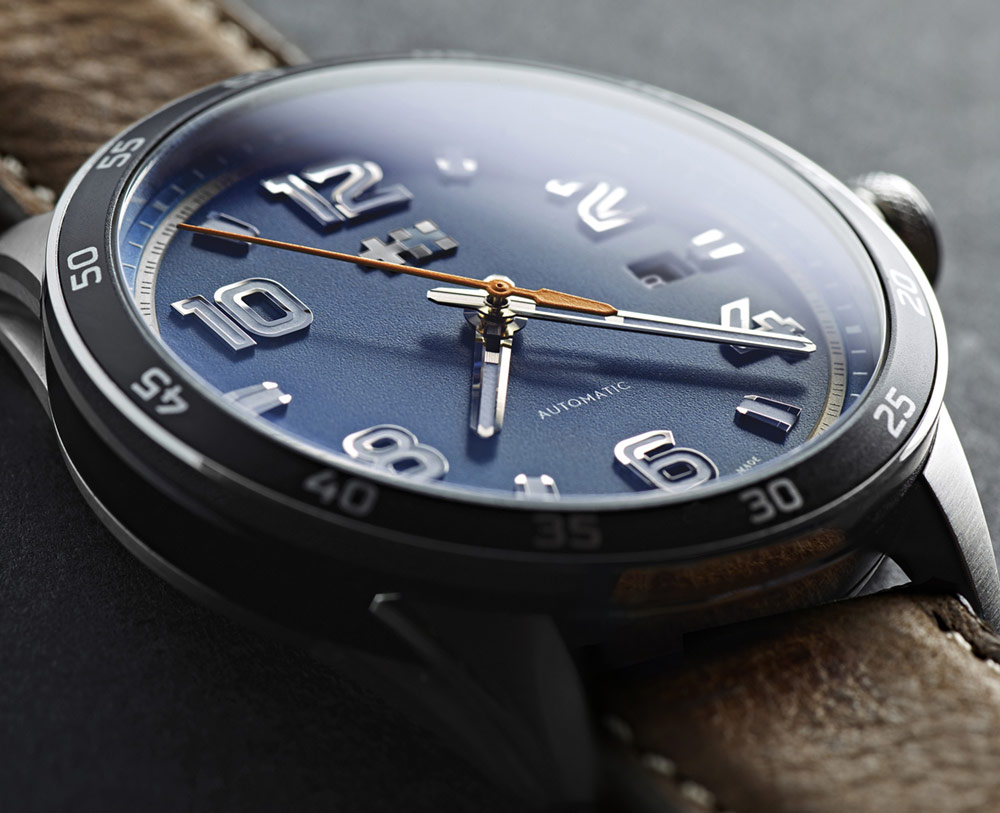 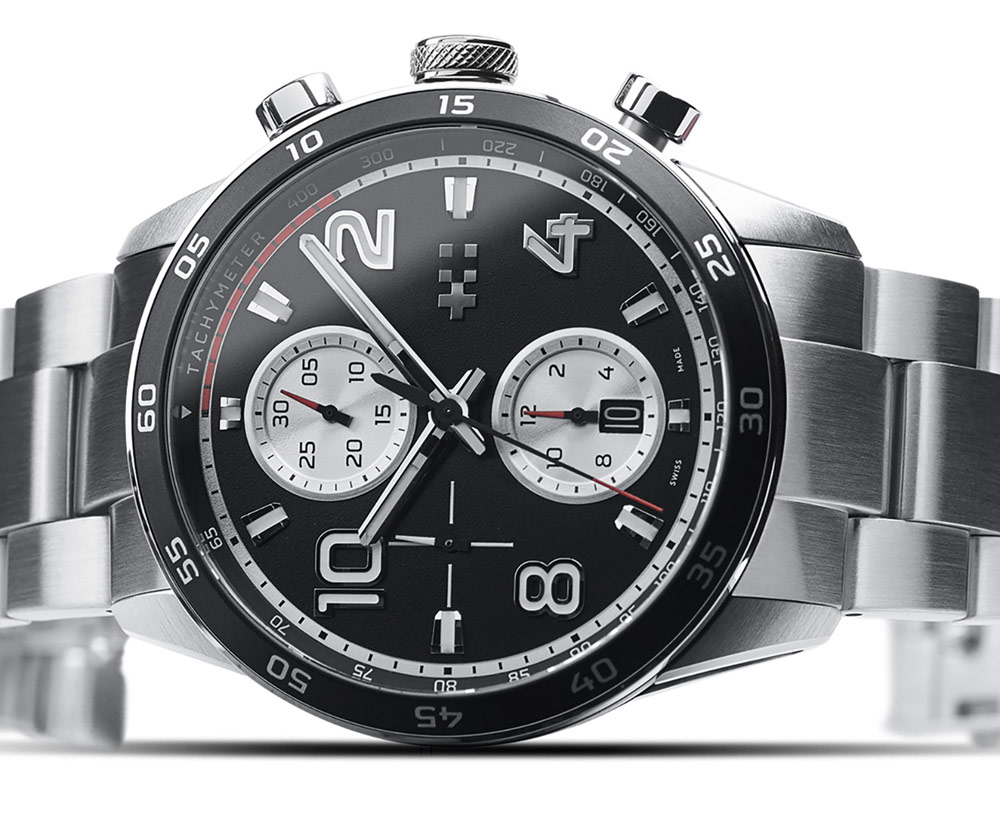 Direct-to-consumer London-based watch brand Christopher Ward is perhaps best known for their Trident collection of 300m automatic dive watches with seconds hands featuring a trident at their base. However, Christopher Ward are also the producers of a diverse range of sports watches that include pieces oriented around aviation, dress, and motorsports. Recently, Christopher Ward announced a revamp of their Motorsports collection to include new models in a variety of sizes powered by quartz or automatic movements, all under the Christopher Ward C7 Rapide moniker. These watches feature Christopher Ward’s new “twin flag” logo meant to represent both the British and Swiss flags together, and no “Christopher Ward” wordmark on the dials. 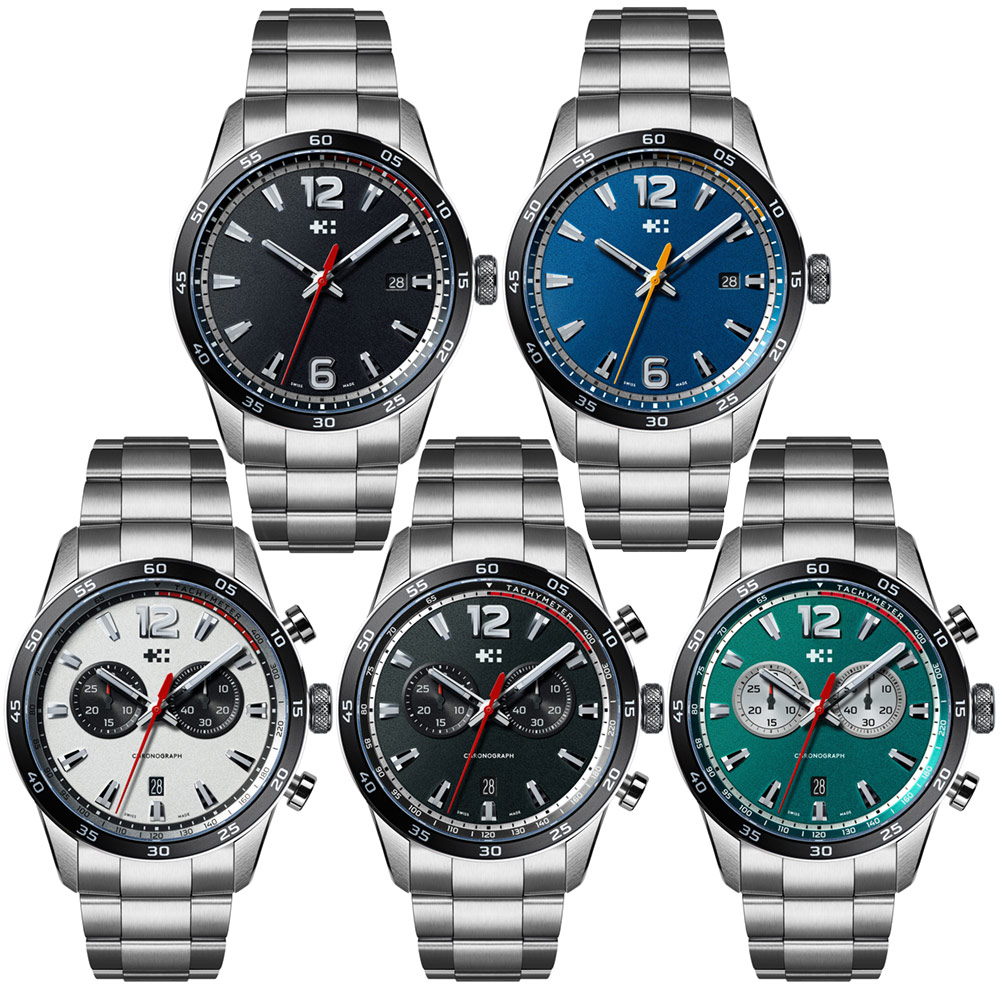 We start with the new Christopher Ward C7 Rapide Quartz, a time and date only, Swiss Ronda 715-quartz powered watch featuring near identical aesthetics to its more expensive automatic siblings in a more affordable package. Like other time and date members of the new C7 Rapide Collection, the Rapide Quartz is tastefully sized at 42mm in diameter. Available with a blue or black textured dial with applied three dimensional hour markers to catch the light as well as a twin flag motif at twelve o’clock, the new C7 Rapide Quartz also features a bevelled minute track and aluminum bezel insert with minute markings at five minute intervals, which tops off the newly designed case.

One of the more striking features of the new collection is the case, which is now a four piece sandwich style construction very reminiscent of fellow British watchmakers at Bremont. The crown is large and knurled to give it a tool watch feel. The C7 Rapide quartz will be available in no fewer than 8 configurations and will retail for a pretty reasonable $455–$525 depending on strap or bracelet choice. 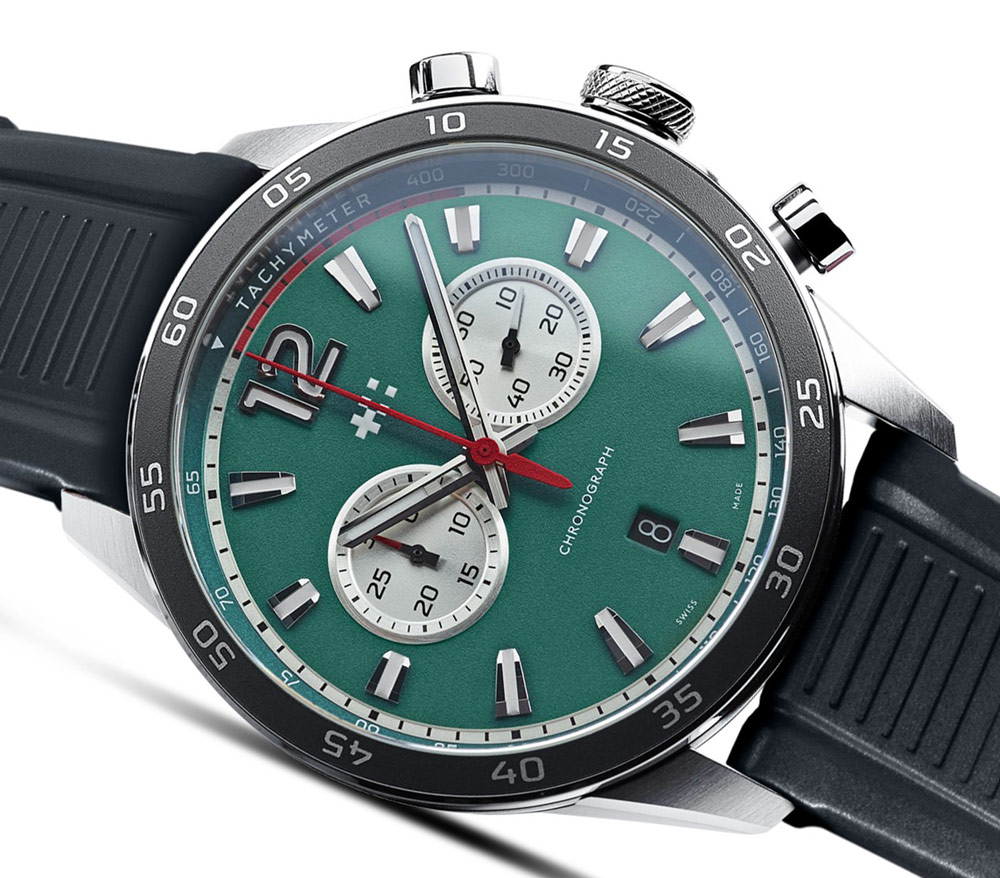 Next in the new quartz collection is the C7 Rapide Chronograph, a Swiss Ronda 5021.1D powered, stainless steel driver’s chronograph also in a 42mm stainless steel case and featuring near identical styling to the time and date version with the addition of sub-dials – one for running seconds at three o’clock and a thirty minute counter at six. The C7 Rapide Chronograph will be available with either a black, white, or British green dial and buyers will have to choose between seven strap or bracelet combinations. Also different from the time and date version is the six o’clock location for the date window. Christopher Ward’s C7 Rapide Chronograph will retail for between $565–$635 depending on strap/bracelet choice. 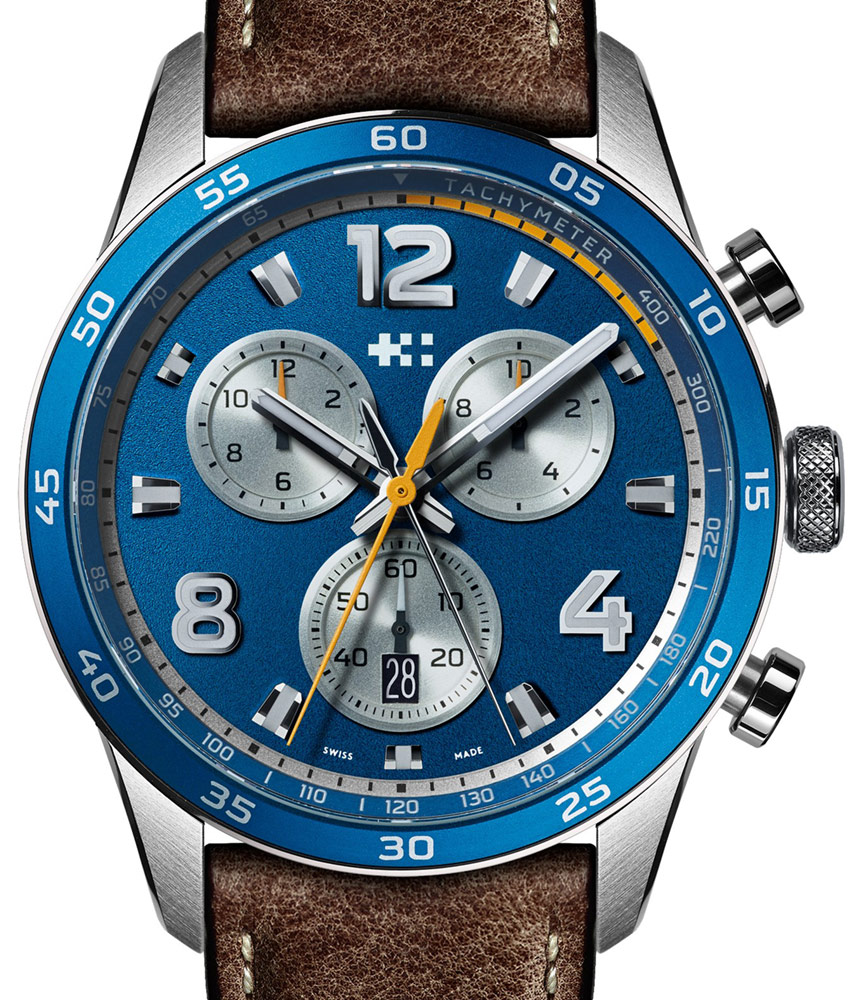 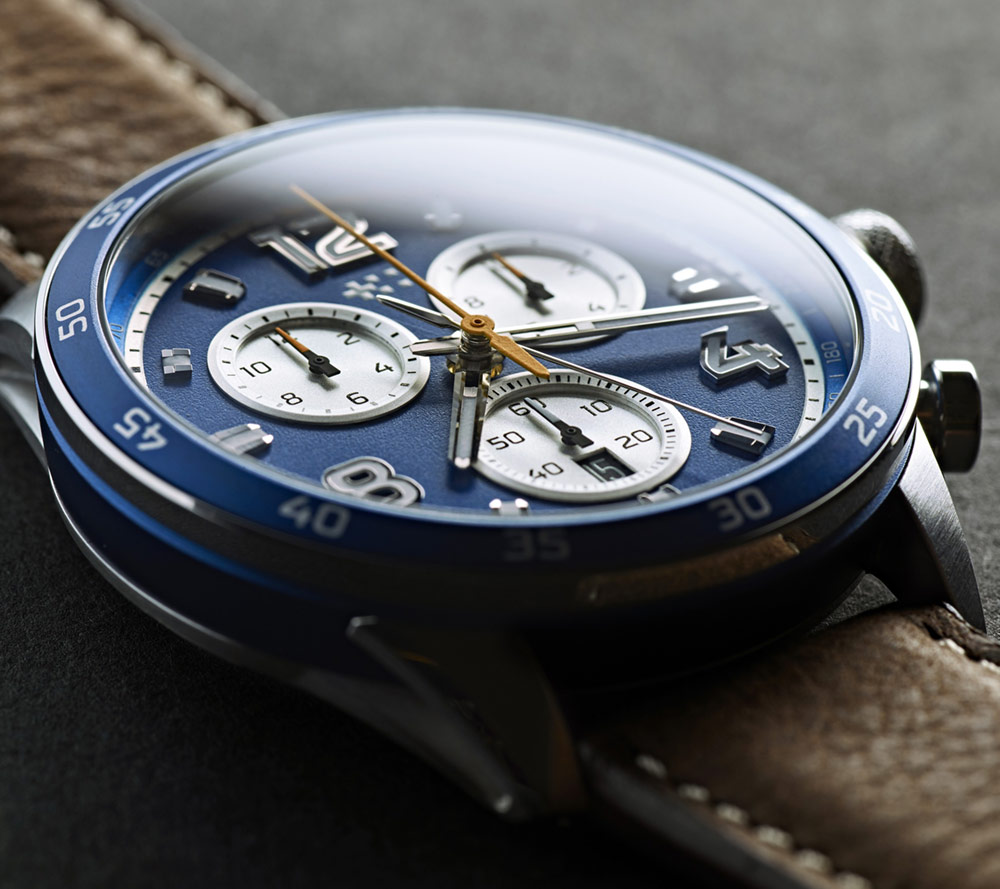 At the top of Christopher Ward’s range of quartz C7 Rapide watches is the Chronograph Limited Edition that is different from the standard model in its blue dial and bezel with yellow accents, traditional quartz chronograph layout with white sub registers at two, six, and ten o’clock, as well as the inclusion of the thermo-compensated ETA COSC certified movement which is said to ensure accuracy of within ten seconds per year. The C7 Rapide Chronograph Limited Edition will retail for $910–$980 depending on which of the three strap options is selected. 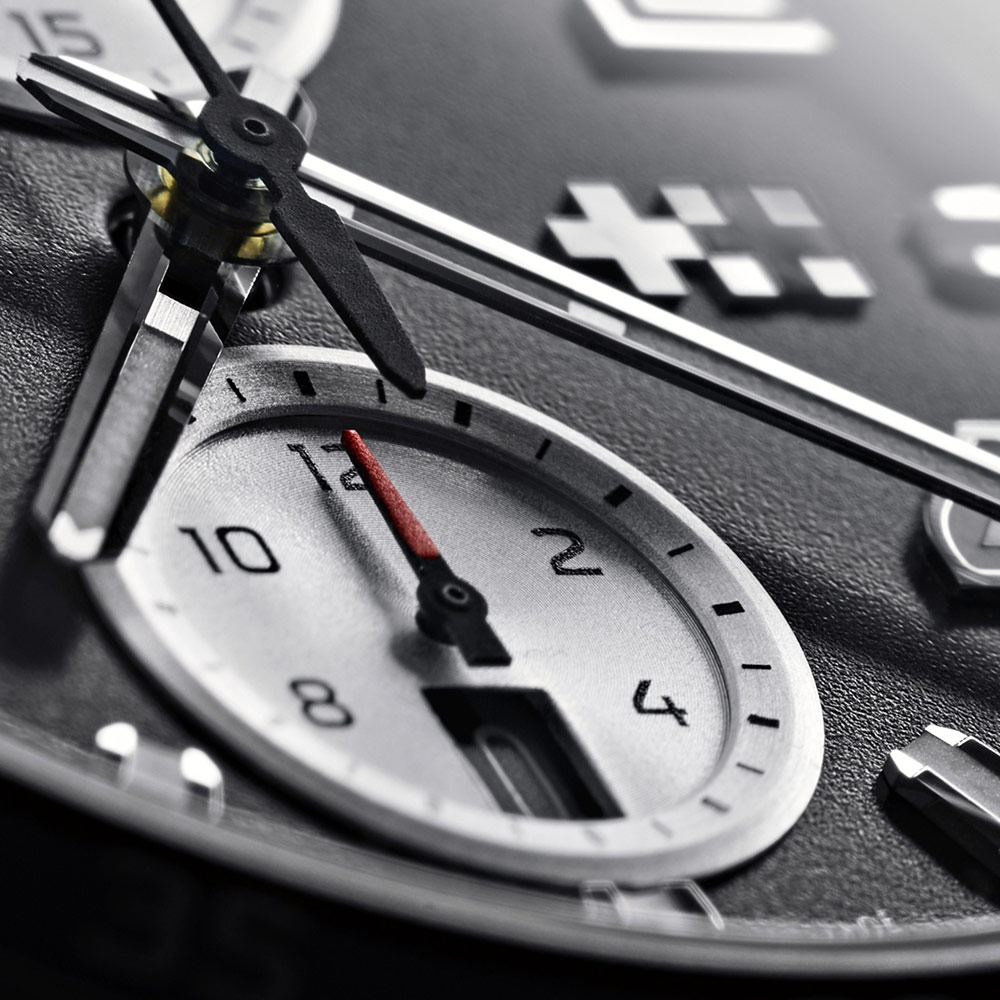 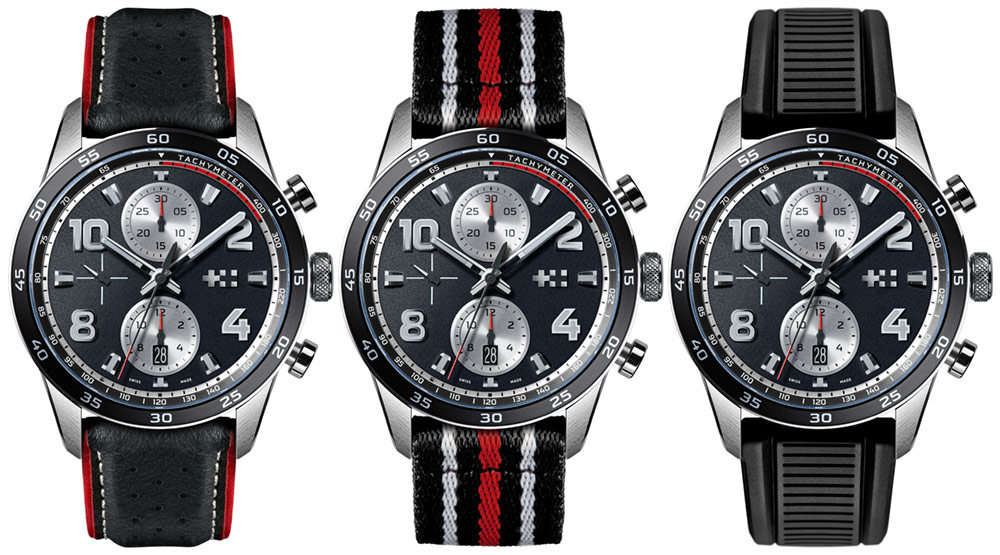 Perhaps the real star of the new C7 Rapide Collection is the inclusion of two new automatic powered versions, one in time and date only powered by the Swiss-made Sellita SW200 and a chronograph powered by the venerable ETA 7750. Both are similar to their quartz powered brethren in terms of their physical size at 42mm in width but feature slightly different styling with regard to dial layout and hour markers. 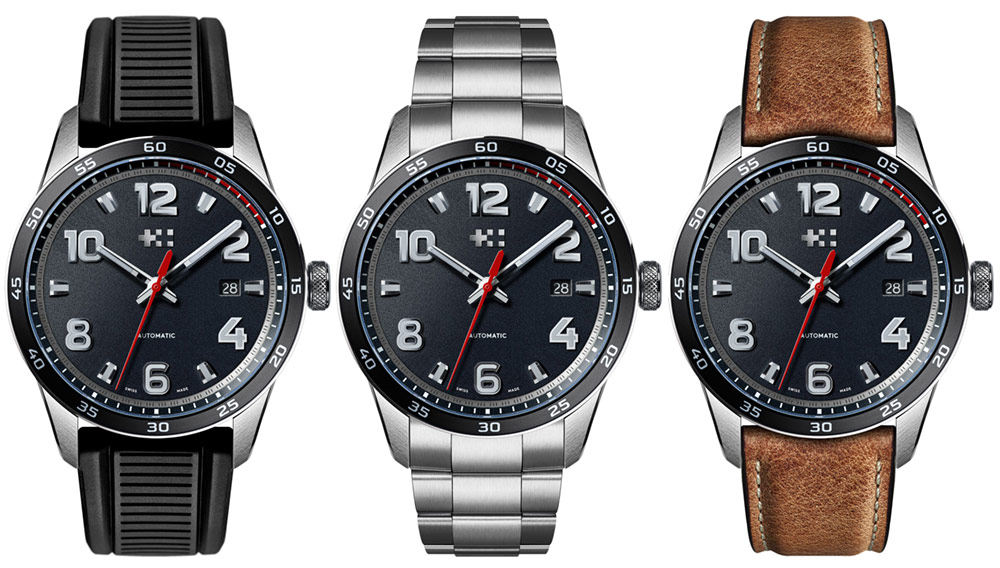 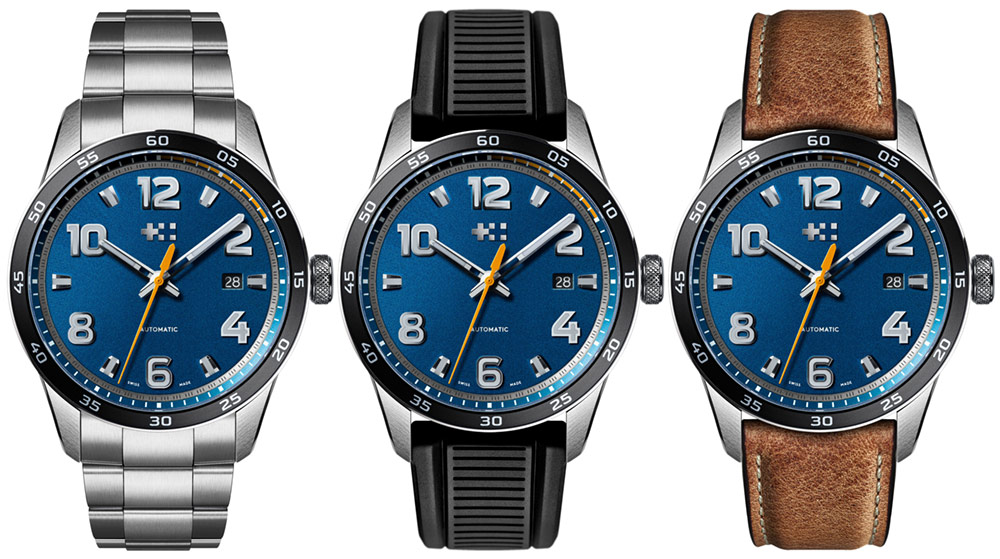 The three handed time and date only C7 Rapide Automatic, available with either a black or blue dial, has a very similar look to the quartz versions with the addition of oversized applied numerals at twelve, two, four, six, eight, and ten o’clock as opposed to just twelve and six as on the quartz models. The four piece case design, aluminum bezel insert with five minute intervals, and bevelled minute track are the same as on the quartz version. As you’d imagine, the word “automatic” also appears at six o’clock in addition to the twin flag motif at twelve o’clock. Sellita’s capable SW200 movement makes the watch a good value at $795–$865 depending on the eight leather, steel, or “high-density webbing” choices on offer.

Complementing the new automatic collection is the C7 Rapide Chronograph Automatic, which may be the most distinctive piece in the line. Owing to the sub-dial configuration inherent in the ETA 7750 it utilizes, the Rapide Chronograph Automatic, available with only a black dial, has a running seconds sub-dial at nine o’clock, a twelve hour indication at six o’clock with the date nearly tucked inside, and a thirty minute sub-dial at twelve o’clock. This rearrangement causes the twin flag logo to be scooted over to the three o’clock position. 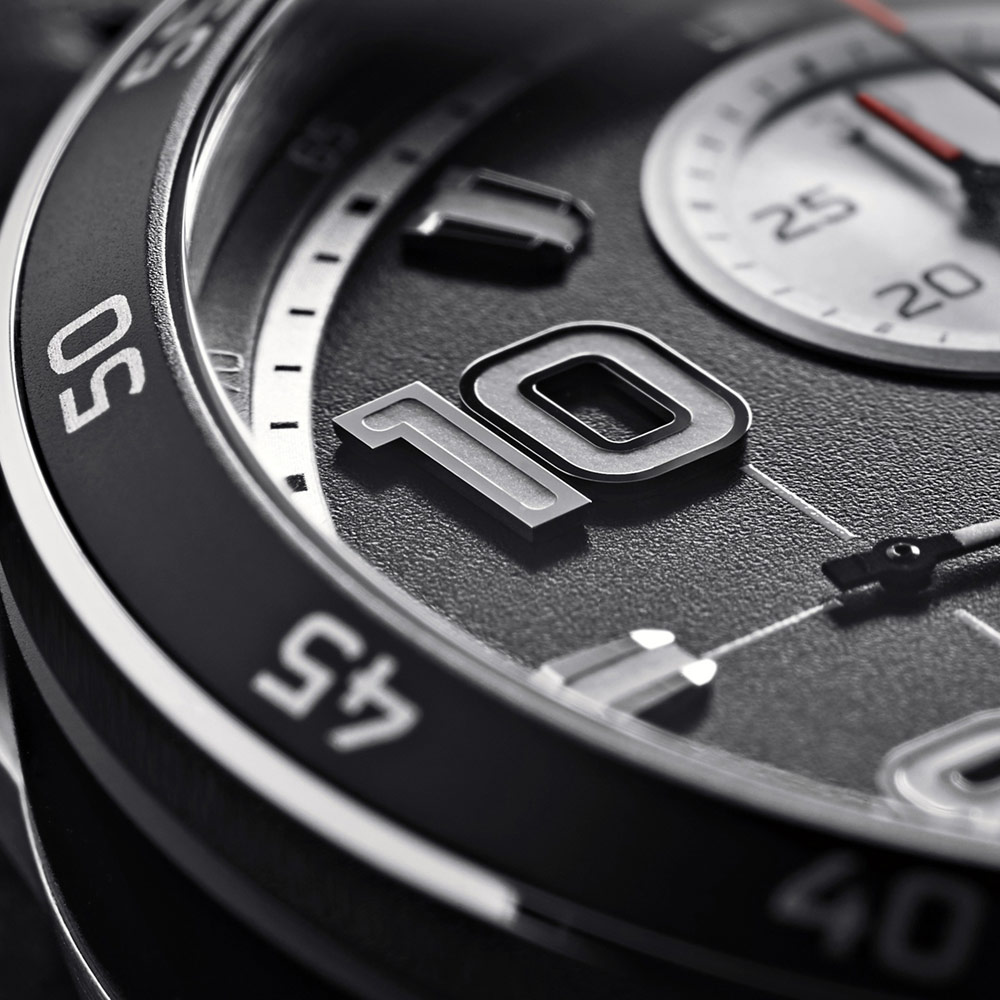 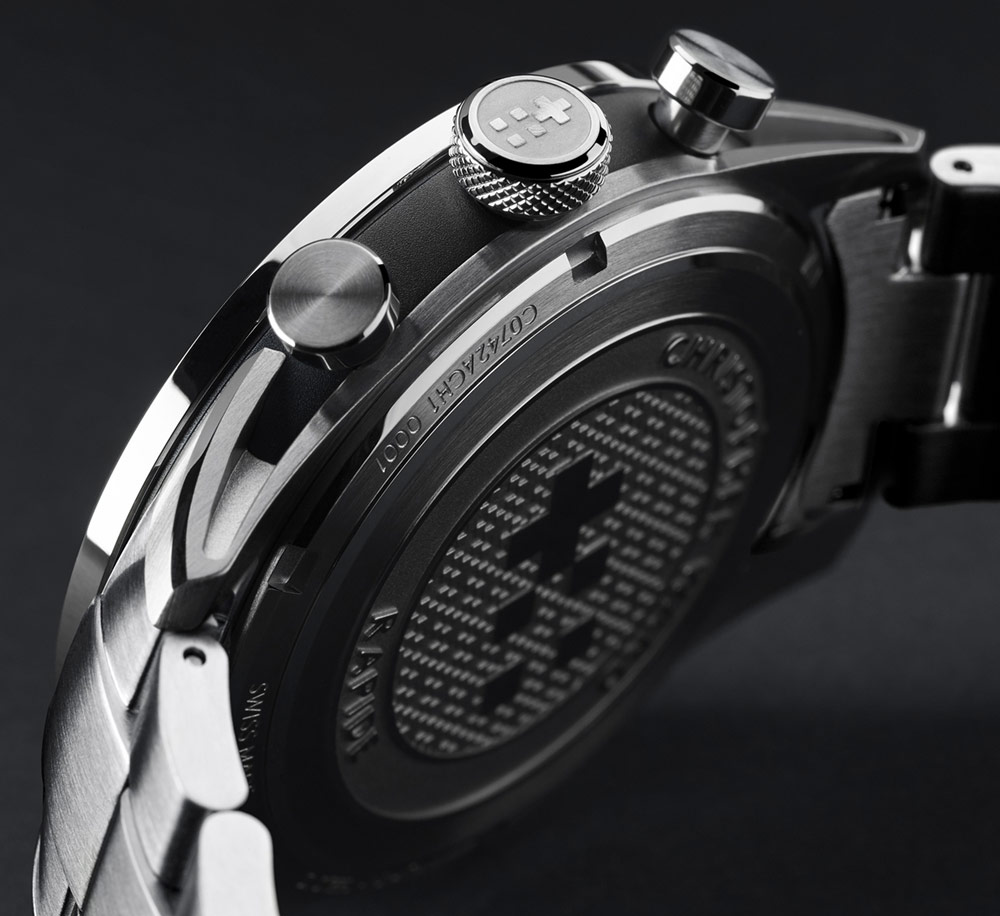 Remaining dial elements, case construction, and the bezel are identical to the other time and date only automatics in the collection. The C7 Rapide Chronograph Automatic is also available in five configurations and will retail for between $1,710–$1,780 depending on strap choice. As if the fine chaps at Christopher Ward hand’t done enough in introducing so many choices in their C7 Rapide collection, they elected to also offer COSC-certified versions, including the quartz chronograph mentioned above and an automatic with a serious-looking red and black color scheme. 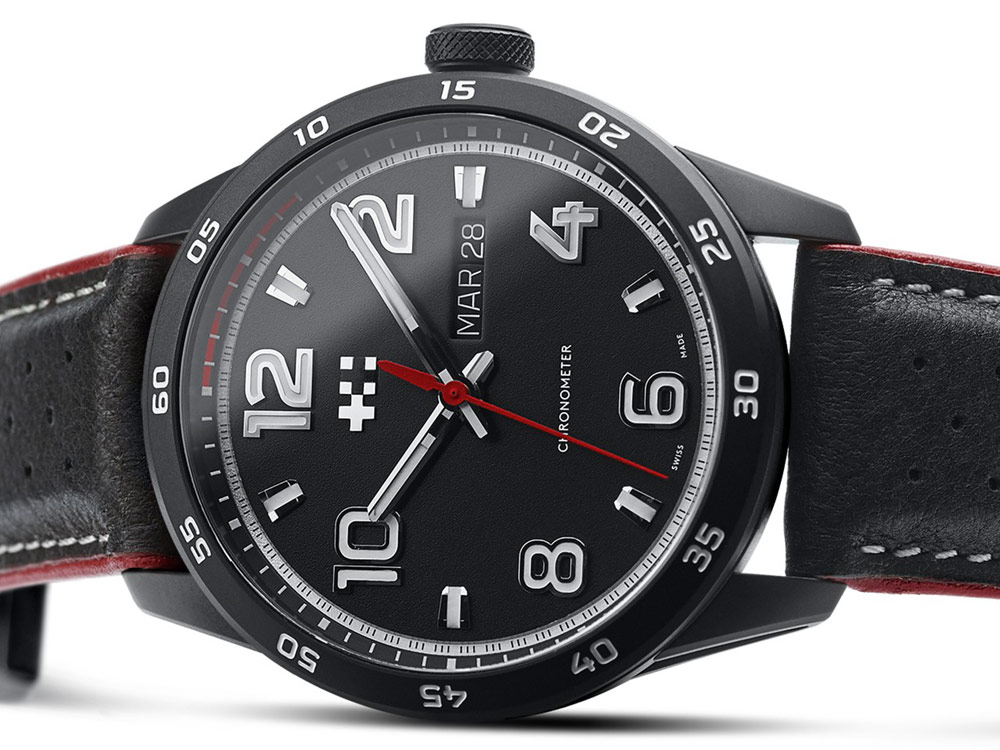 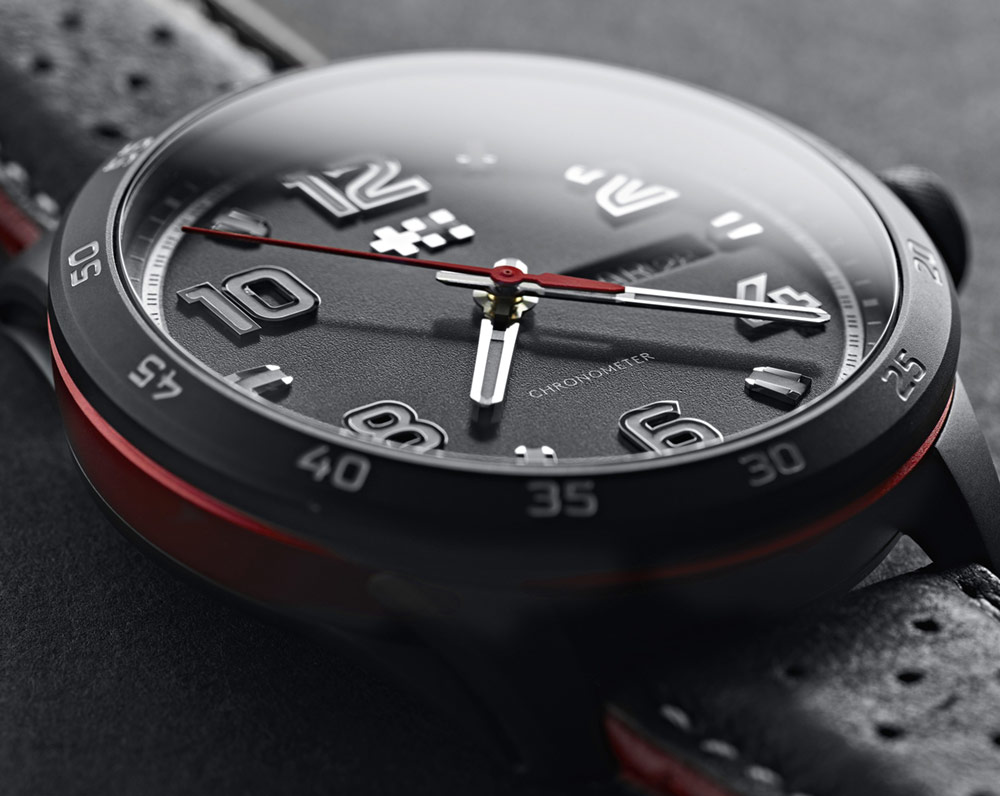 The C7 Rapide Day Date COSC Limited Edition, available in only 100 pieces, is identical to the standard model other than the addition of the day function to complement the date, the PVD case coating (black on top and bottom and red for the inner portion of the case), and the chronometer certified ETA 2836 movement within. It will be available on either a webbing strap or on Piccari leather for $1,035. 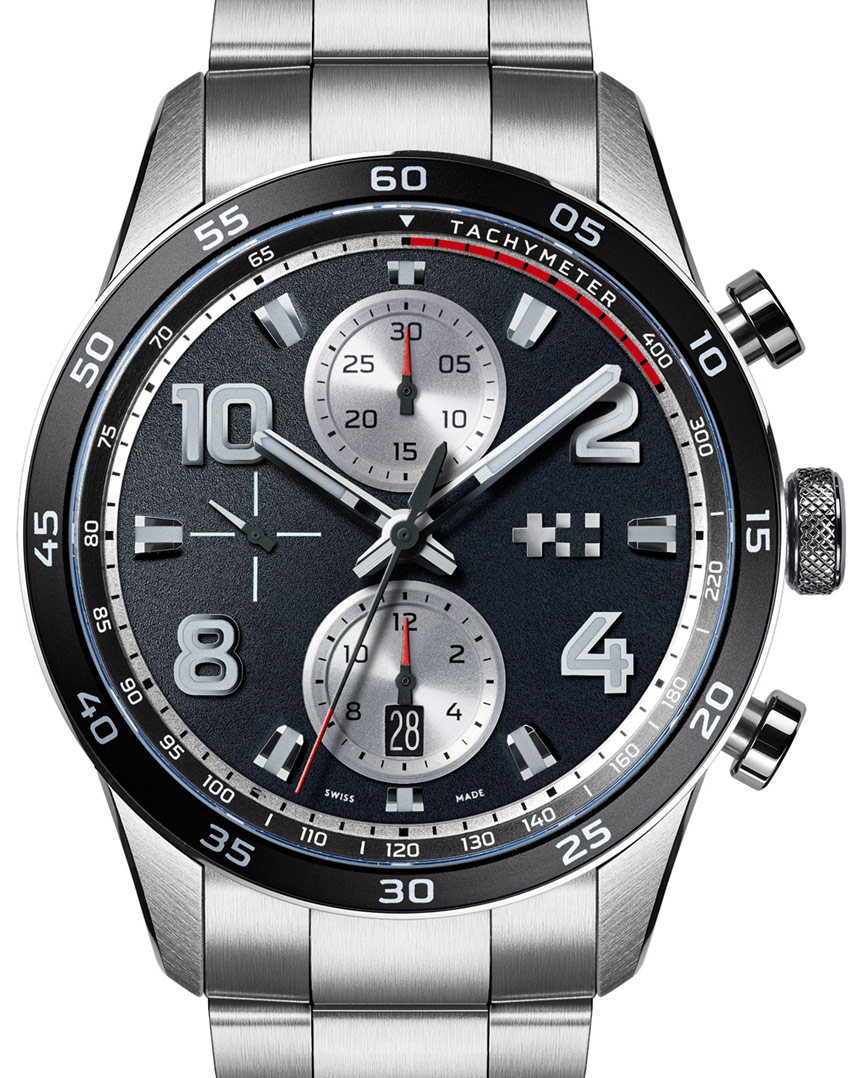 A totally redesigned collection like what Christopher Ward has created with the C7 Rapide watches demonstrates their growth as a brand and determination to offer a diverse and interesting collection to their fans – or an alternative to, say, Montblanc’s Timewalker. Like the rest of the collection, these Christopher Ward watches are priced a lot lower than many with similar appointments, owed largely to their direct-to-consumer model and limited marketing efforts. With tastefully designed options and combinations, the new C7 Rapide collection offers a lot of options for anyone who’s interested in a Swiss-made, motorsports-inspired watch. christopherward.co.uk