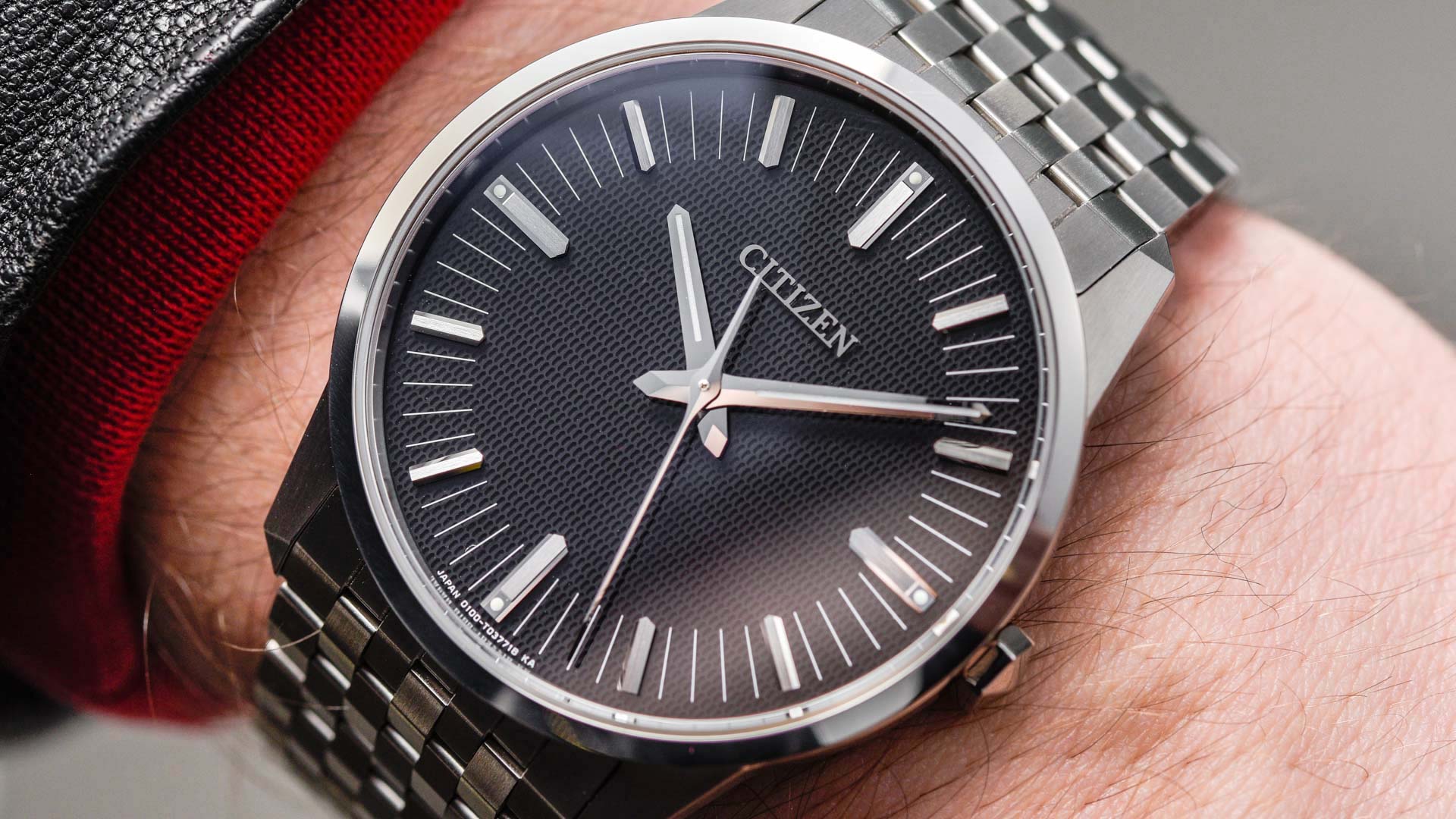 In many ways, Baselworld 2019 was an excellent year for the Japanese watch brands. Holes in the European watch industry strategy and innovation engine have emboldened watchmakers in the east to up their game, product-wise, as well as capture market share. A motivated Japanese watch industry has most brands choosing distinct but powerful ways to capture consumer attention and emotion. A product like the limited-production Citizen Caliber 0100 watch is a perfect example.

Examine the rear of the case, and you’ll see what amounts to haute electronic horology. A few years ago, it would have been almost unthinkable, or even humorous, to “expose” a quartz movement through the rear of a watch case in a fashion akin to how mechanical watches often display their movements. The point of having a transparent caseback in order to show off the movement is a means to highlight the value and craft inherent in the movement’s design and construction. Inexpensive quartz movements tend to lack those traits and are thus not worth showing off, most of the time — but not all the time. More recently, however, certain special, high-end quartz movements are becoming less camera shy. Companies such as Citizen are ripe with deserved confidence, manifested here in this subtle display of the caliber 0100 movement as seen in the back of the Caliber 0100 watch. The sophisticated electronic timekeeping engine isn’t anything like rank and file quartz watches out there but represents a new era of performance and achievement. 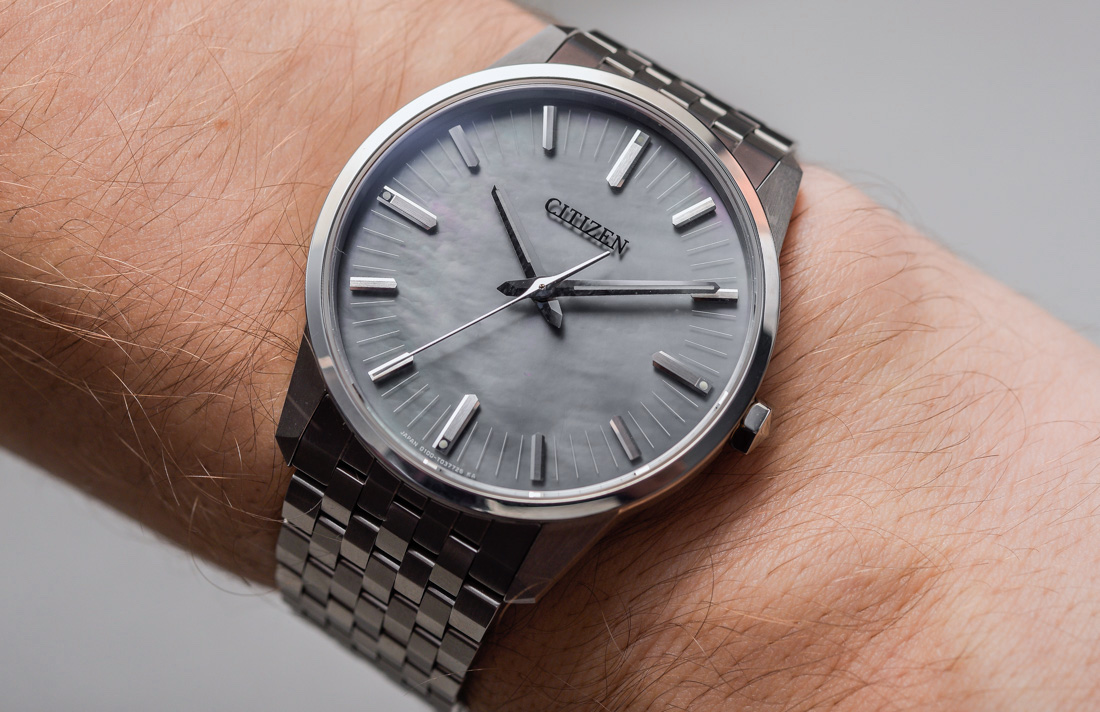 To those not intimately familiar with how watches work or what to be impressed with, the easiest way to sell the value of the Citizen Caliber 0100 is to tell people it is accurate to one second per year and that it is powered by light. That means that, during normal wear on the wrist (with all that implies, including the effect of gravity and temperature change), this unassuming wrist watch package is able to be so stable in its timing performance that all the rate errors added up over the course of a year are minuscule. More so, it is able to achieve such accuracy without needing the time to be updated by an external source (such as having the time updated by an atomic clock signal) and does so by sipping electricity ever so efficiently. 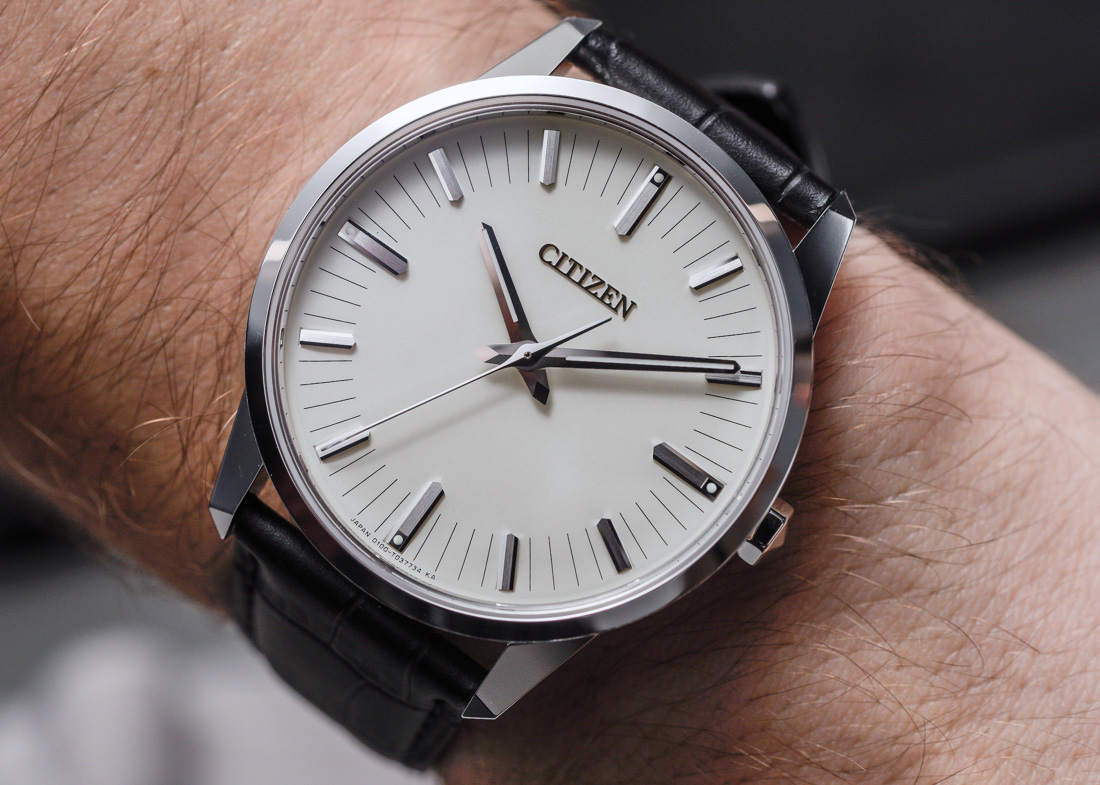 It is my opinion that most consumers don’t really understand the value of ultra-accurate timekeeping devices because they rely on devices that are covertly being updated by other ultra-accurate timekeeping devices they never see. Your mobile phone or computer are not particularly impressive timekeepers on their own. They often include the same quartz timekeeping technology as most mainstream quartz timepieces but have their clocks updated on a regular basis via “Internet time.” That’s just time set by an atomic clock device that delivers signals to help other devices update their time. The Citizen Caliber 0100 doesn’t need any of that to achieve ultra-accuracy. “Autonomously” (meaning without the need for third-party input), the 0100 is so accurate that it offers timekeeping performance most watch-lovers, or consumers in general, aren’t even accustomed to. 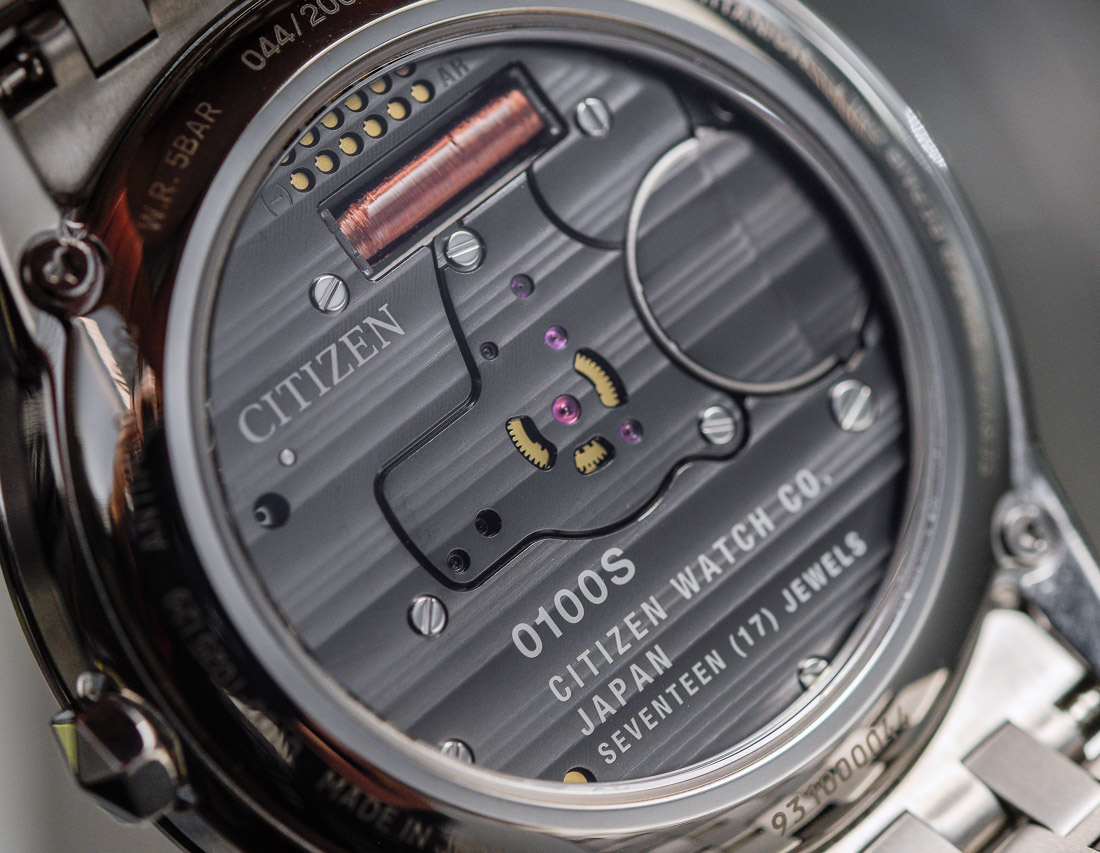 One of the Caliber 0100’s secrets is how it performs the above task using so little electricity. Citizen Eco-Drive movements (of which the caliber 0100 is one) derive power from a photovoltaic cell right underneath the dial that charges the internal battery. Light power generation is effective but extremely limited when it comes to overall power generation. Standard quartz movements are able to sip electricity and thus the meager power generated by light is enough to power these movements. This is the basic premise of Eco-Drive watches and Citizen has been doing this for well over 30 years. What is different about the Caliber 0100 is that, in principle, it should use dramatically more power than standard quartz movements because of its operating frequency. How Citizen was able to make an 8,400,000 Hertz movement (Caliber 0100) operate with roughly the same electricity generation as a 32,768 Hertz movement (standard quartz) is a total mystery to me and part of the innovation magic inherent in this new product. From a sheer technical perspective, this fact is, in my opinion, the most impressive feature of the Caliber 0100. 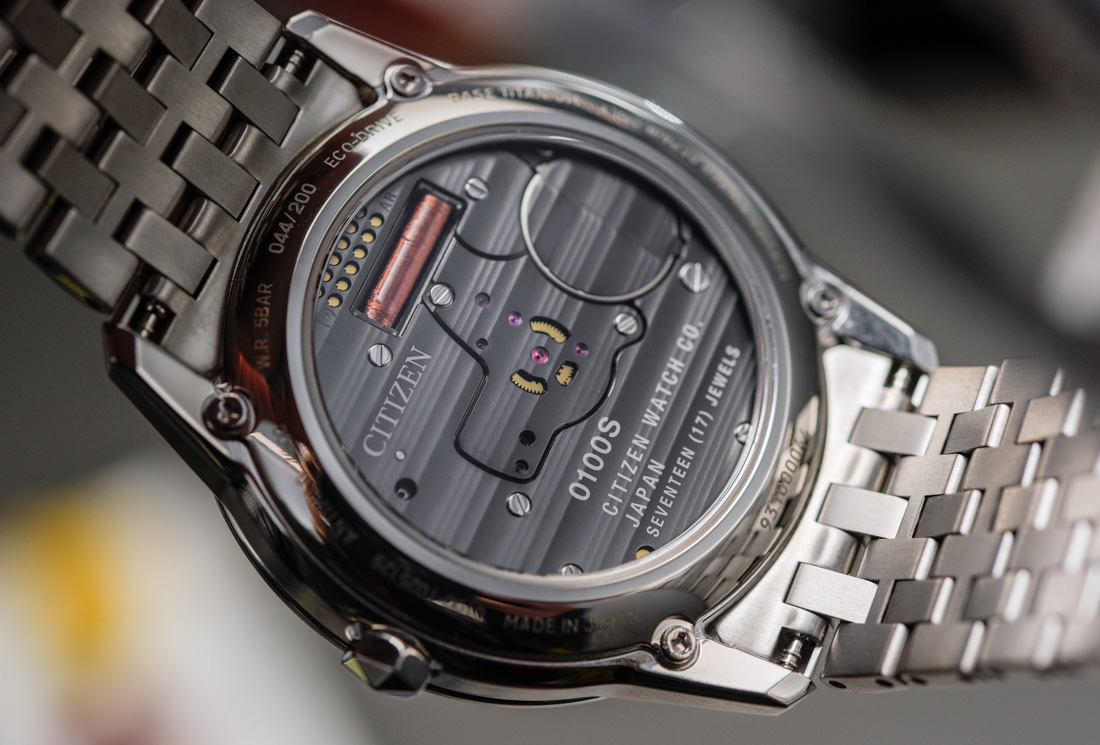 Citizen debuted the Caliber 0100 movement in 2018, and now, it’s releasing the Caliber 0100 watch. The confusing bit, for now, is that the name of the movement and the name of the watch are the same. The debut set of watches to include this fantastic new technology is also comprised of limited-edition pieces, as well as luxury-priced and luxury-appointed, with beautifully crafted cases and immaculate dials that feel excellent on the wrist. Similar to the way Grand Seiko watches are often (but not always) much more high-end in construction and feel, as compared to standard Seiko watches, the Citizen Caliber 0100 represents a particularly high level of design, as well as fit and finish, compared to the company’s more high-volume timepiece products. 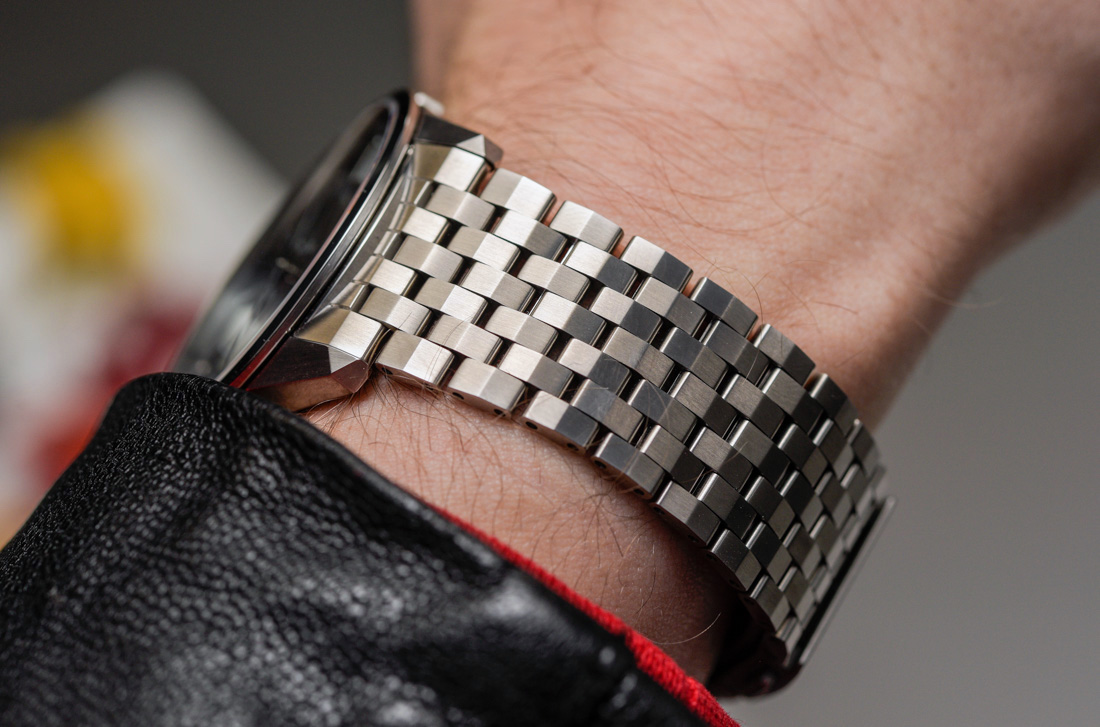 A hair under 39mm-wide, the Caliber 0100 watches are also rather thin and supremely elegant on the wrist. There is almost no hint that these are “enthusiast” watches containing complicated, record-breaking movements. What you see are handsome dress-style watches whose wearer knows will be the most accurate timepieces in their collection. Citizen debuts the Caliber 0100 in a single 18k white gold model (paired with a strap) or two Super Titanium (especially scratch-resistant titanium) variants with matching Super Titanium bracelets. These latter watches are incredibly light on the wrist and impressive to behold. 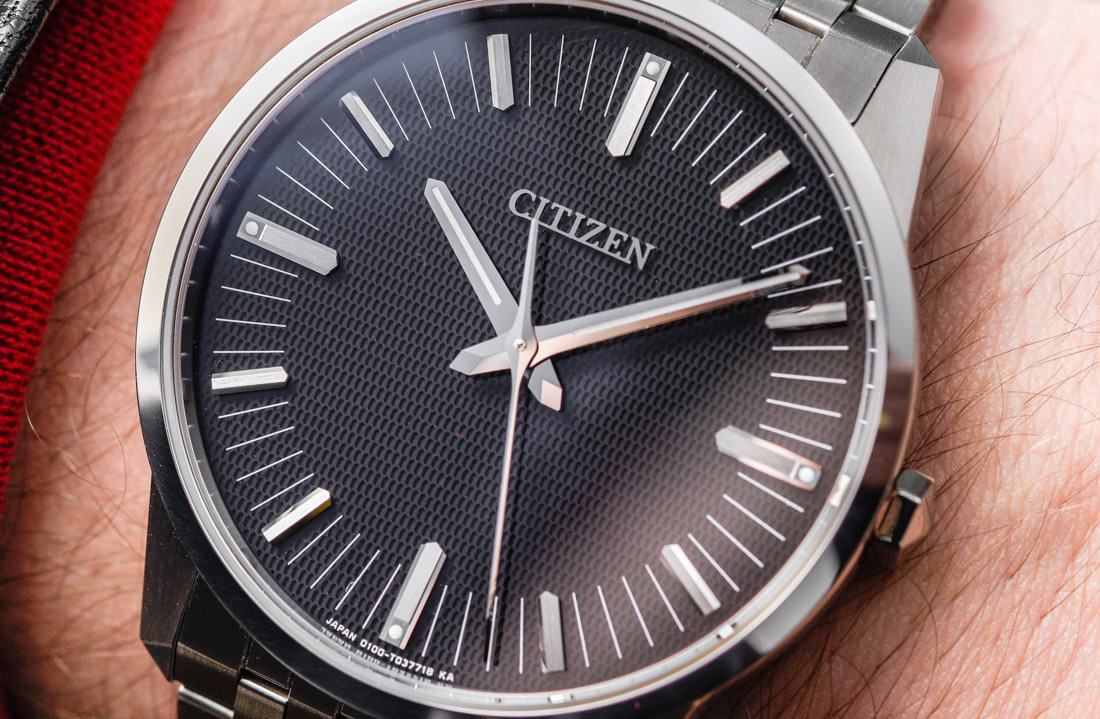 For Citizen’s design and engineering team, the Caliber 0100 movement and timepiece concept is about beauty and elegance, more so than trying to impress collectors with a high-tech performance watch. The brand specifically chose to pair its most accurate movement with a relatively simple, albeit well-executed, design. The dial features only the time, with perfectly polished applied hour markers, along with matching hands. 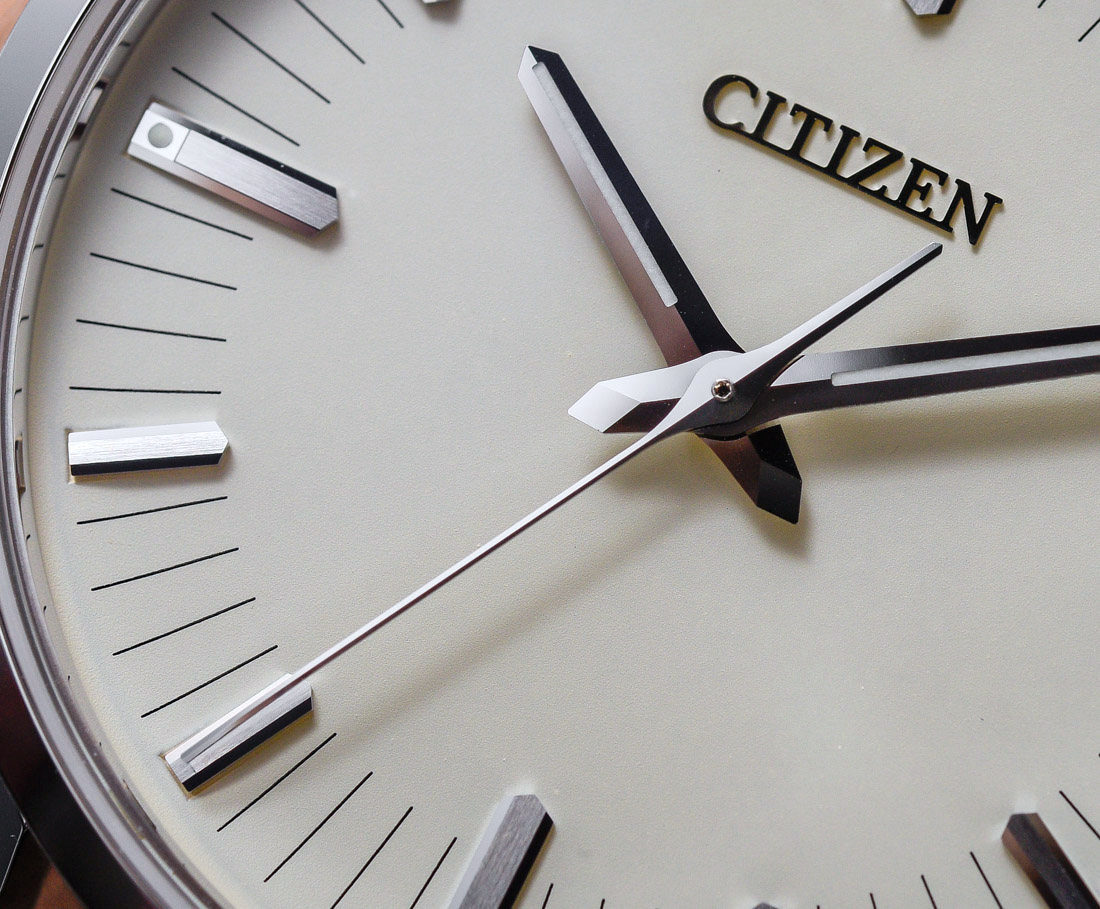 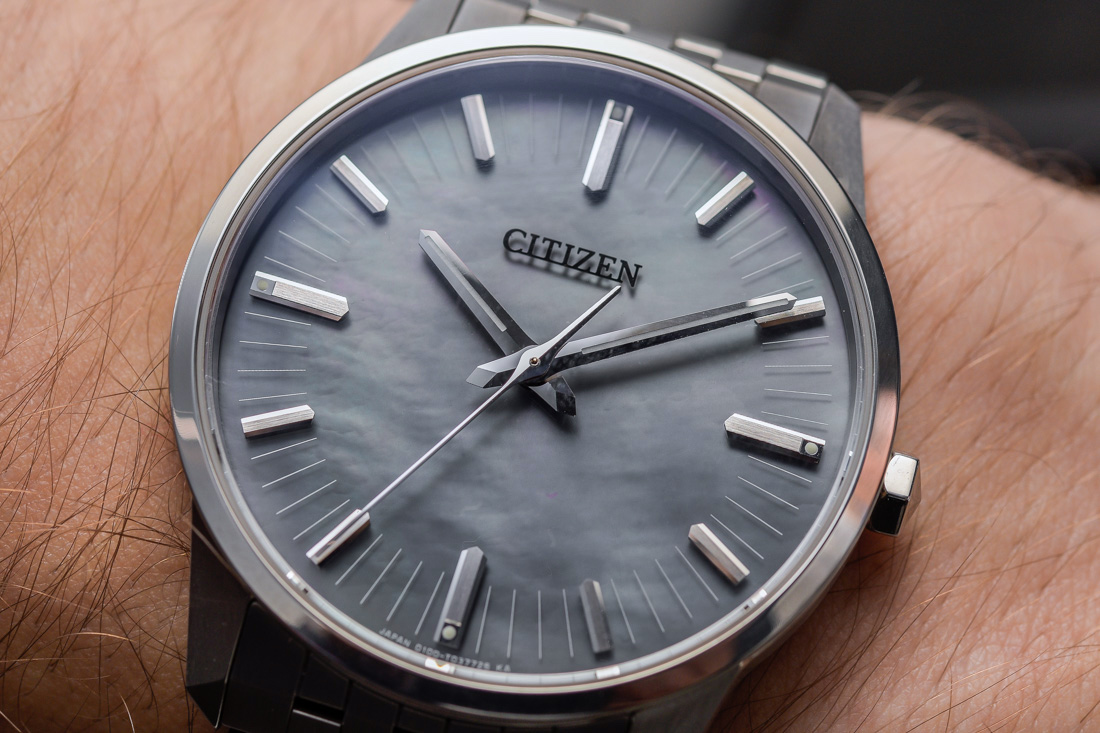 Citizen chose not to include “Eco-Drive” as part of the official name of the Caliber 0100 watch but, of course, it is a light-powered movement. This implies that all versions of the Caliber 0100 watch will need to have light-permeating dials, something that Citizen happens to be an expert at producing. At launch, the Caliber 0100 dial options include ivory white, mother-of-pearl, and black with a quasi-honeycomb texture; each covertly allows light to enter beneath it.

Achieving one-second-per-year accuracy in the movement was an exercise in stacking a series of performance-enhancing features together. No one technical feature, alone, results in this type of accuracy. As I said above, the primary system that even allows for this type of accuracy is the 8.4 megahertz frequency quartz regulation system. Citizen didn’t use a standard quartz crystal cut (that looks like a small tuning fork), but rather something called an AT-cut that has a different shape. 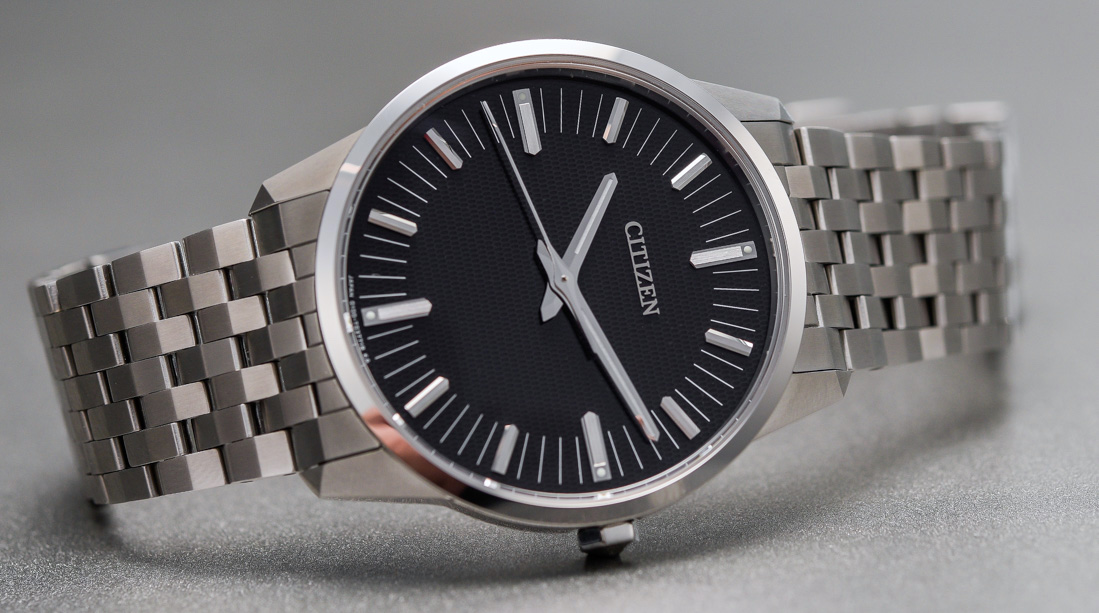 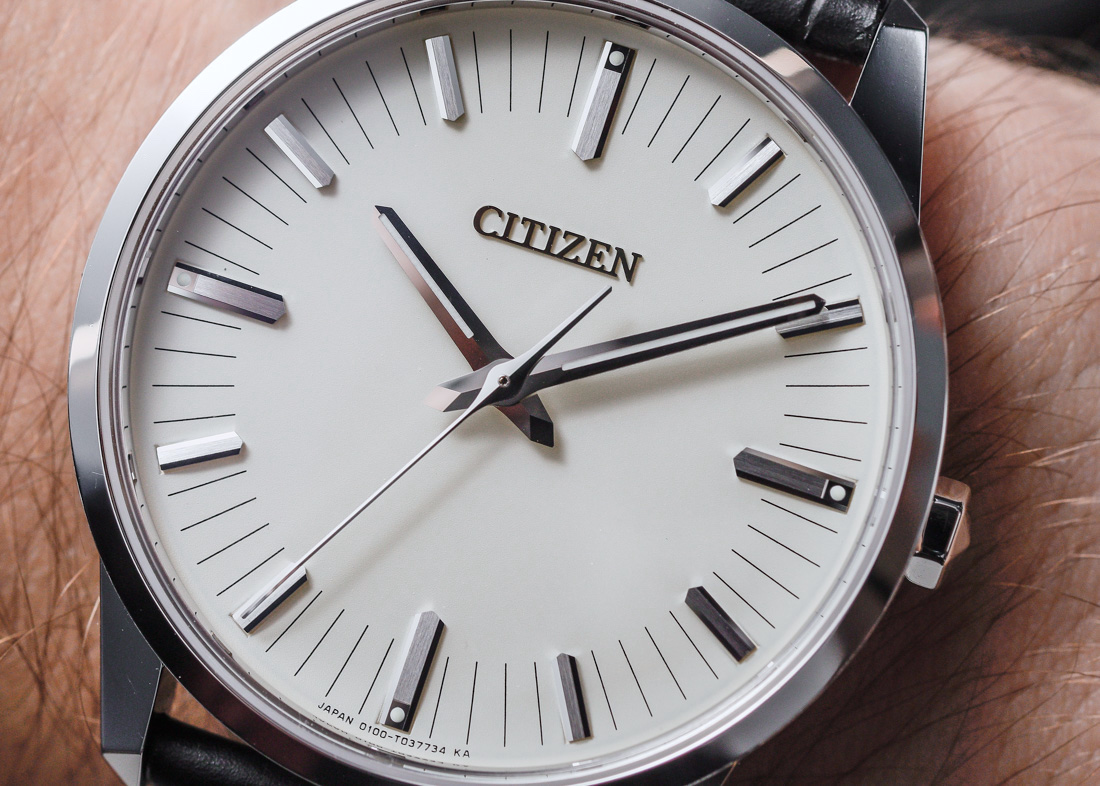 The Caliber 0100 also includes a thermo-compensation system. Again, this technology isn’t new, but as applied to the Caliber 0100, it is one of several features that, taken together, help reach the one-second-per-year accuracy. Thermo-compensation systems in quartz movements include a small internal thermometer which measures the temperature of the quartz crystal chamber each minute. This information is used to make adjustments to the rate results from the movement and thus compensates for known errors caused by temperature changes. How does the movement know how much to compensate the rate results when the temperature changes? Easy: Prior to assembling the movement, Citizen measures exactly how the specific quartz crystal performs at a series of temperatures, and then includes that specific information inside the movement. None of this equates to the much more simple and less technically challenging operation of standard quartz movements out there. You can see that, while the Caliber 0100 is indeed a quartz movement, it isn’t built like, nor does it perform, like the standard quartz movements anyone can find in large quantities elsewhere. 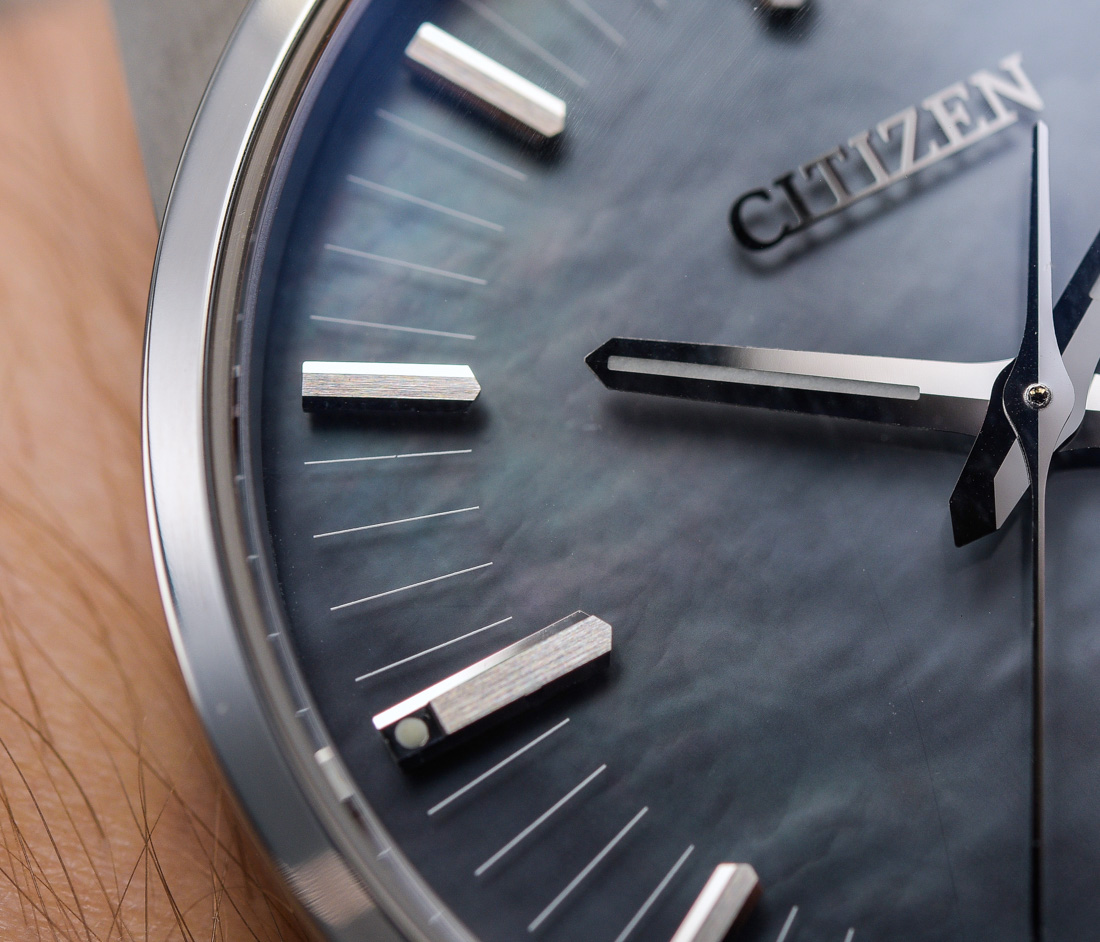 Emotionally and practically, I relish in the idea of an ultra-accurate timepiece, if only because the idea of having a watch that I can adjust my other watches to (when they need to be set) has a lot of appeal. I always find myself interested in mechanical watches that are as accurate as possible, but none of them holds a candle to the Citizen Caliber 0100. Even if a super-accurate Rolex claims two-seconds-per-day accuracy, that figure doesn’t even compare to one-second-per-year accuracy from the Citizen Caliber 0100. I am very much looking forward to reviewing this product soon, and further hope that Citizen will manage to reduce the price of this beautiful-to-wear technology in the years to come. The Citizen Caliber 0100 tops out with the reference AQ6010-06A in 18k white gold that will be limited to 100 pieces with a price of $16,800 USD. More accessible are the two Citizen Caliber 0100 watches in titanium, which are the references AQ6021-51E (5oo pieces) and AQ6020-53X (200 pieces), each priced at $7,400 USD each. Learn more at the Citizen website here.