Since 1989, Citizen has used its Promaster line to debut new sports watch technologies from depth gauges to altimeters, and as part of its 2020 novelties the brand has used the Promaster nameplate to combine several of its most successful quartz innovations into a new and functional blend. The Citizen Promaster/Eco-Drive Satellite Wave GPS Diver 200m is an aggressive, modernist take on the tool diver concept, bringing together a suite of utilitarian complications for the serious traveling diver. The massive 47mm case is made of Citizen’s proprietary Super Titanium alloy, optionally available with a stealthy black DLC coating. The form itself is a hefty take on traditional dive watch forms, including a deeply engraved dive bezel and wide set lugs. As the name suggests, the case provides a solid 200 meters of water resistance. The dial is vibrantly colorful, with Super Titanium models receiving a bright emerald green sunburst dial while the DLC coated variant sports a dial of sunburst sapphire blue. Both versions follow the same dial layout, with a wide set of skeletonized sword hands and beefy variants on classic applied diver indices. The inner rehaut is a clear hint towards one of the watch’s party pieces, with a world time scale highlighting eight of the world’s most famous diving destinations. The satellite GPS timekeeping feature automatically adjusts the watch’s time setting upon arriving in a new time zone, and periodically sends out additional signals to maintain accuracy. The 8 o’clock subdial combines several complications. First and most obvious of these is the retrograde day indicator, but the “on” and “off” markers indicate activation and deactivation of the satellite GPS link. When turned off, the displayed time zone can be adjusted by rotating the bezel. Lastly, there is the dive mode indicator. When dive mode is activated, all functions other than basic timekeeping are deactivated, preventing accidental adjustments while underwater. All these functions are made possible by the in house Cal. 158 quartz movement inside the Citizen Promaster/Eco-Drive Satellite Wave GPS Diver 200m. This is the first dive watch movement to combine Citizen’s Eco-Drive solar charging system with its satellite GPS timekeeping complication, while also providing robust and dependable performance. Accuracy without the satellite GPS correction is within 5 seconds per month, with a power reserve after a full solar charge of 7 years. Citizen completes the watch with a textured urethane rubber strap in either blue or black with a diver’s extension. While perhaps not the most stylish tool diver on the current market, the Citizen Promaster/Eco-Drive Satellite Wave GPS Diver 200m is an advanced and solidly practical entry from the brand. The Citizen Promaster/Eco-Drive Satellite Wave GPS Diver 200m is available now through authorized dealers with a starting MSRP of $1,350. For more details, please visit the brand’s website. 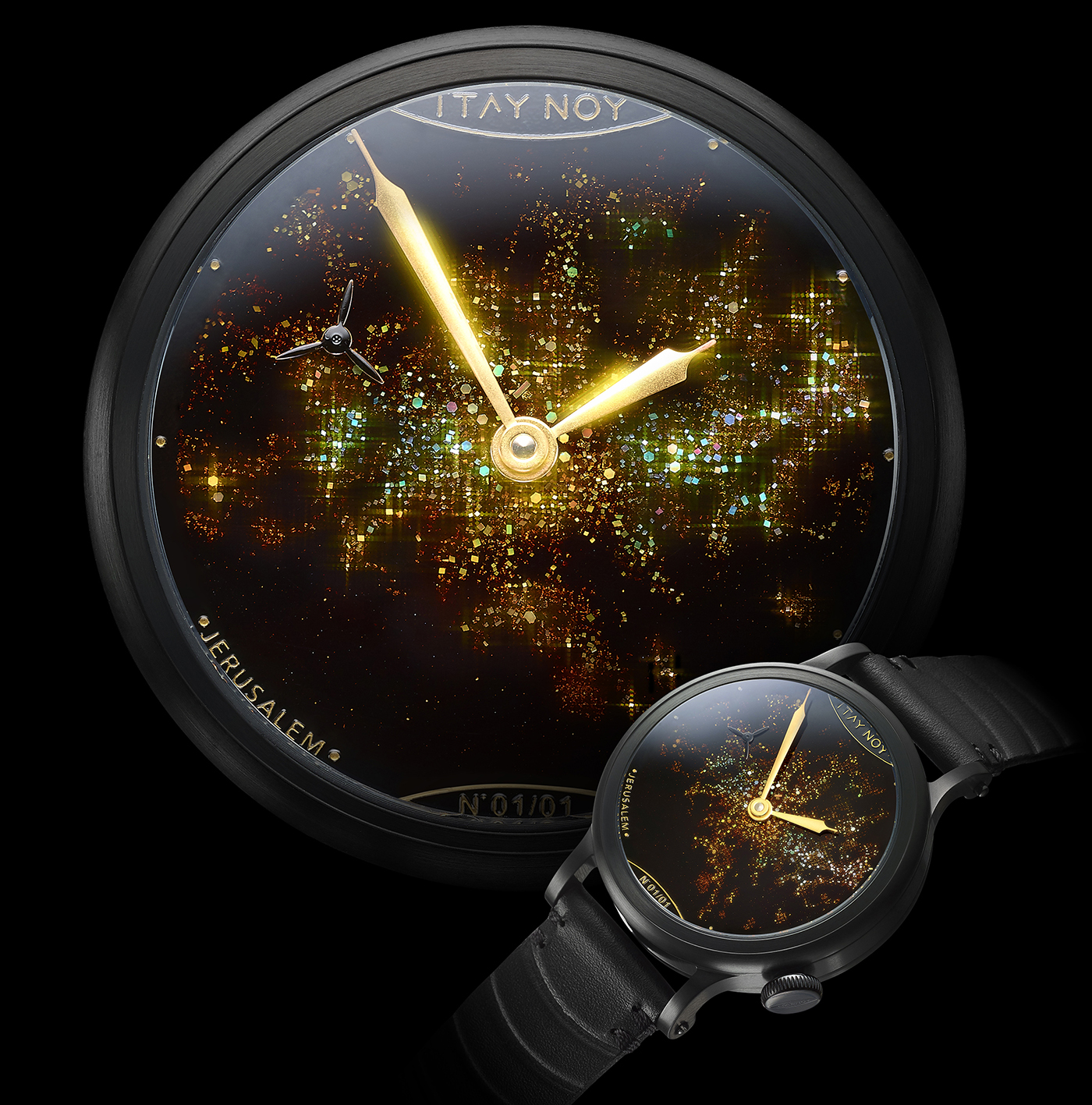 Boutique Israeli watchmaker Itay Noy has carved out a unique niche for itself in the horological market over the past several years, creating unique twists on the traditional three hand dial format unified by its distinctive signature case design. For its latest effort, the brand has created the Night Flight series, a series of unique one-off models with an intensive hand finished dial lacquering process meant to evoke the look of cityscapes at night from the air. The limited edition Itay Noy Night Flight series may not be as experimental as some of its stablemates, but instead showcases stellar craftsmanship in both dial and movement finishing. The 44mm black PVD stainless steel case of the Itay Noy Night Flight should feel familiar to fans of the brand, with the brand’s distinctive curling lugs, rounded case sides, and 4 o’clock pillbox crown shared with the rest of the line. An oval shaped sapphire display window dominates the caseback, allowing for a curated view of the skeletonized movement within. The dial of the Itay Noy Night Flight series is the real centerpiece of the design, with each iteration featuring unique artwork evoking an aerial view of a different city. Cities rendered so far include Jerusalem, Seoul, Melbourne, Taipei, Las Vegas, Denver, Cairo, Berlin, Beijing, and Athens, but the process for each dial remains the same. Each dial is hand painted with multiple layers of lacquer in black, orange, and yellow, mixed with glittering flakes of 24K gold. To maximize the effect of this sparkling dial treatment, the rest of the dial is kept minimal, with only tiny hour indices around the dial perimeter, simple gold tapered syringe hands, and a fanciful propeller style running seconds indicator at 10 o’clock. Itay Noy powers the Night Flight with the ETA 6497-1 handwound small seconds movement. This example of the 6497-1 is heavily modified from standard, with filigreed skeleton bridges in black PVD along with blued screws. Performance remains standard with a 46 hour power reserve at a steady 18,000 bph beat rate. Itay Noy finishes the watch with a handmade black leather strap on a butterfly deployant clasp. With the Night Flight, Itay Noy has demonstrated one of the most dramatic and eye catching dial treatments in its segment. While only ten examples of the Itay Noy Night Flight have been made, the brand considers each iteration as a one of a kind piece thanks to its unique dial. MSRP for the Itay Noy Night Flight stands at $16,800. For more information, please visit the brand’s website. 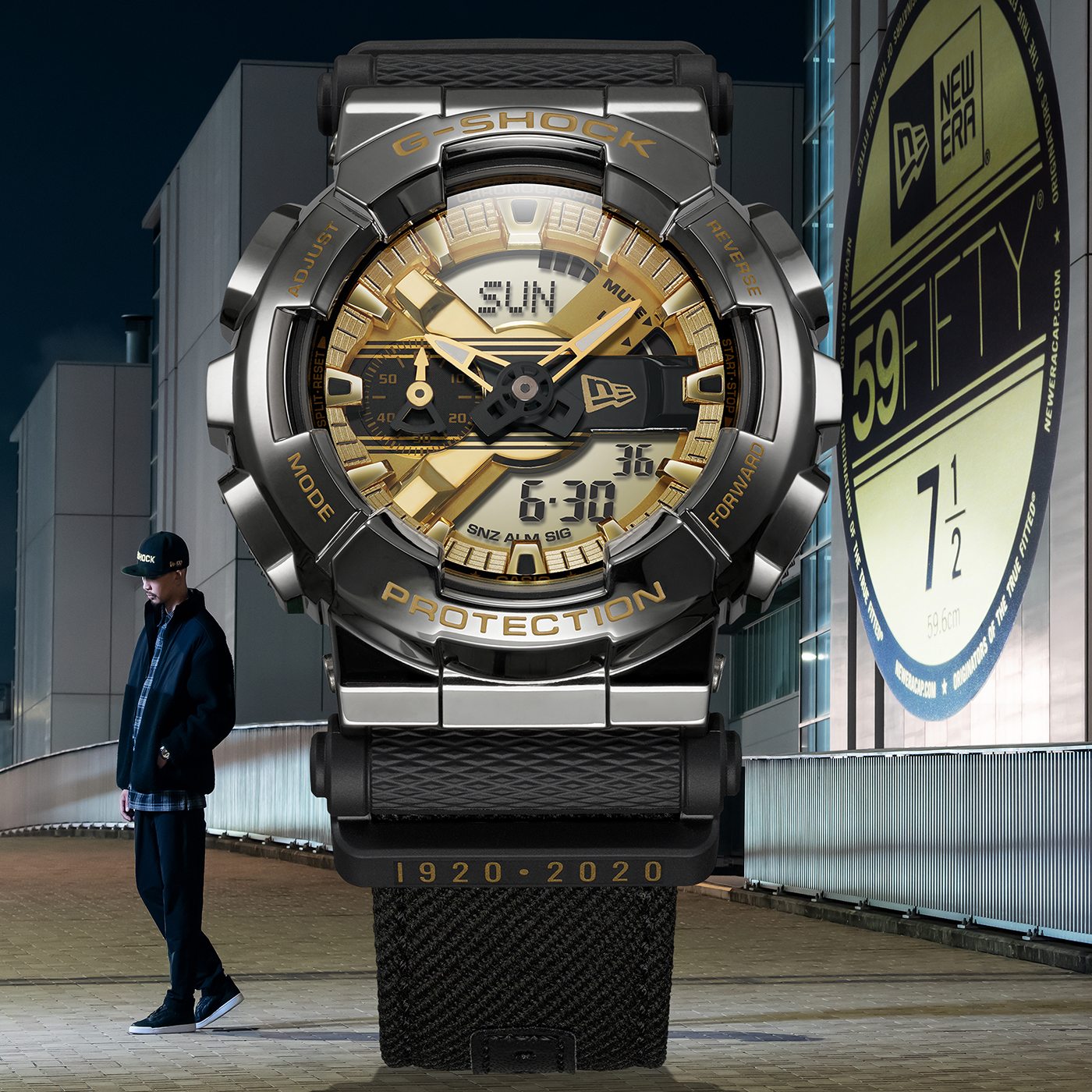 Casio is no stranger to collaborative limited edition designs through the iconic G-Shock series. In 2020 alone, the G-Shock line has been paired with everything from NASA to “Dragon Ball Z,” and for its latest release the brand has paired with famed headwear brand New Era to celebrate its 100th anniversary. The resulting limited edition Casio G-Shock GM110NE-1A adds a handful of custom touches referencing New Era’s iconic baseball caps, while bringing a masculine new colorway to the cornerstone GA110 profile. The 51.9mm case of the G-Shock GM110NE-1A follows the distinctive GA110 profile, but is topped with a forged metal bezel featuring a black IP treatment and bold golden lettering including a “1920-2020” inscription above the hooded lugs. The dial is likewise similar to the standard GA110, but continues the black and gold color scheme with a graphic black horizontal stripe featuring the New Era flag emblem. The GM110NE-1A uses the same quartz module as its regular production counterpart, and so features a host of complications including five multi-function alarms, one snooze alarm, a world time complication, a 1/100 second chronograph, a 24 hour countdown function, automatic LED dial illumination, and a perpetual calendar. Battery life is rated for three years. Casio packages the G-Shock GM110NE-1A with a pair of strap options. The first is a durable black cloth strap with a Kelly green lining, in reference to the iconic New Era 59FIFTY baseball cap line, along with gold tone hardware and an embroidered New Era logo in gold. The second option is more of a standard G-Shock iteration, with a black urethane strap imbued with flecks of gold tone. Among a packed field of limited edition G-Shock collaborations, the limited edition Casio G-Shock GM110NE-1A stands out as one of the cleanest and most refined designs in the current catalog. While classified as a limited edition, Casio has not released information on how many examples will be produced. The Casio G-Shock GM110NE-1A will be available through select retailers in November 2020 at an MSRP of $340. For more details, please visit the brand’s website.