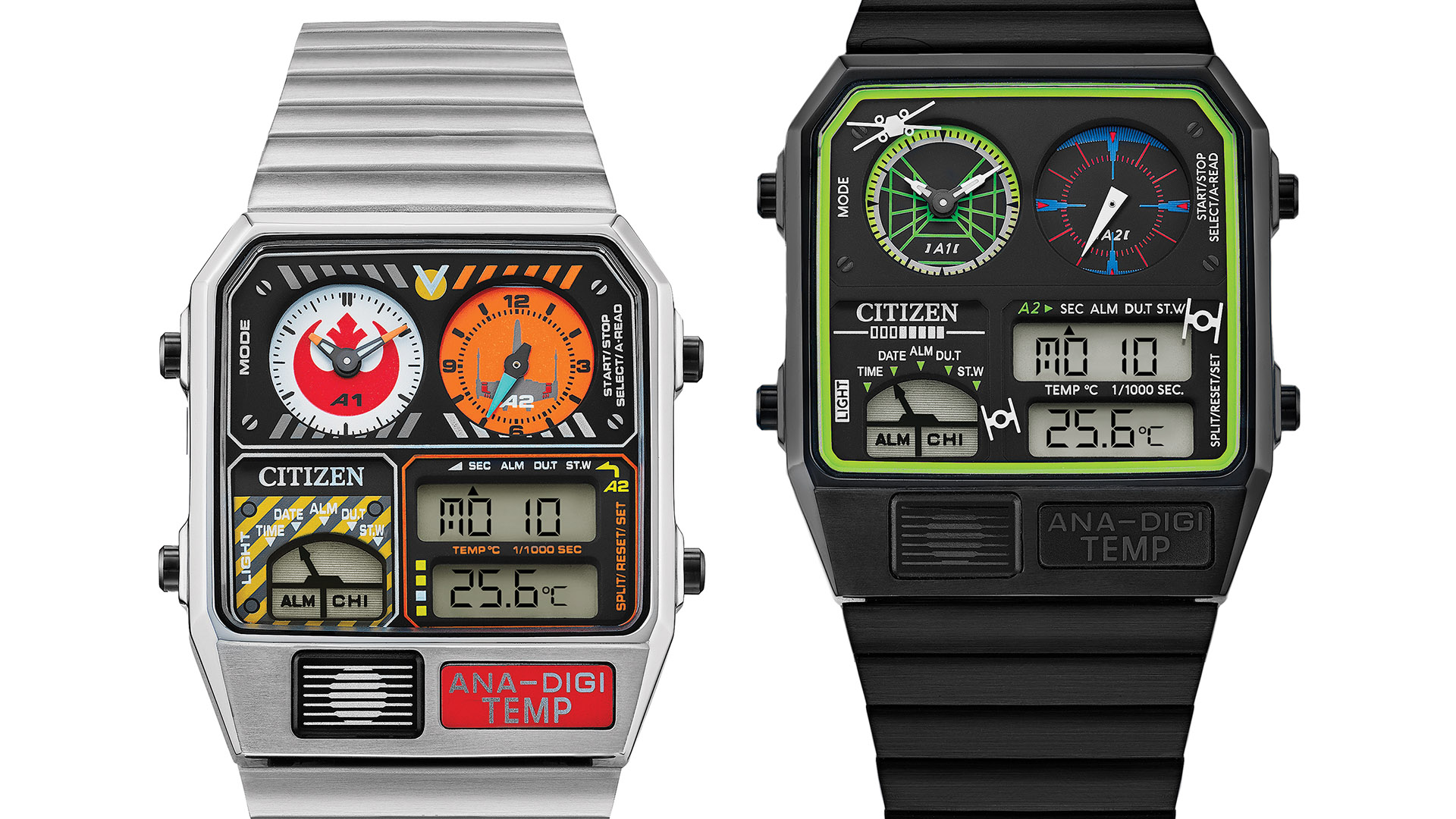 44 years on from the release of the original film, “Star Wars” remains a global cultural juggernaut, prompting homages and tie-ins in nearly every consumer industry. The world of watchmaking is no stranger to “Star Wars” theming, with releases ranging from disposable toy children’s watches to elaborate six-figure tourbillon designs over the years. With its close licensing agreement and official partnership with “Star Wars” franchise owner Disney, Japanese giant Citizen is one of the most prolific brands to reference the galaxy far, far away. Its latest set of releases in this vein, however, does what very few “Star Wars”-themed watches have ever done before by making timepieces that wouldn’t look out of place in the world of the films themselves. By reimagining the classic angular ‘80s design of the Ana-Digi Temp series in a sextet of “Star Wars”-inspired colorways, the new Citizen Ana-Digi Star Wars collection captures the spirit of the original movie trilogy in a playful and unique way. 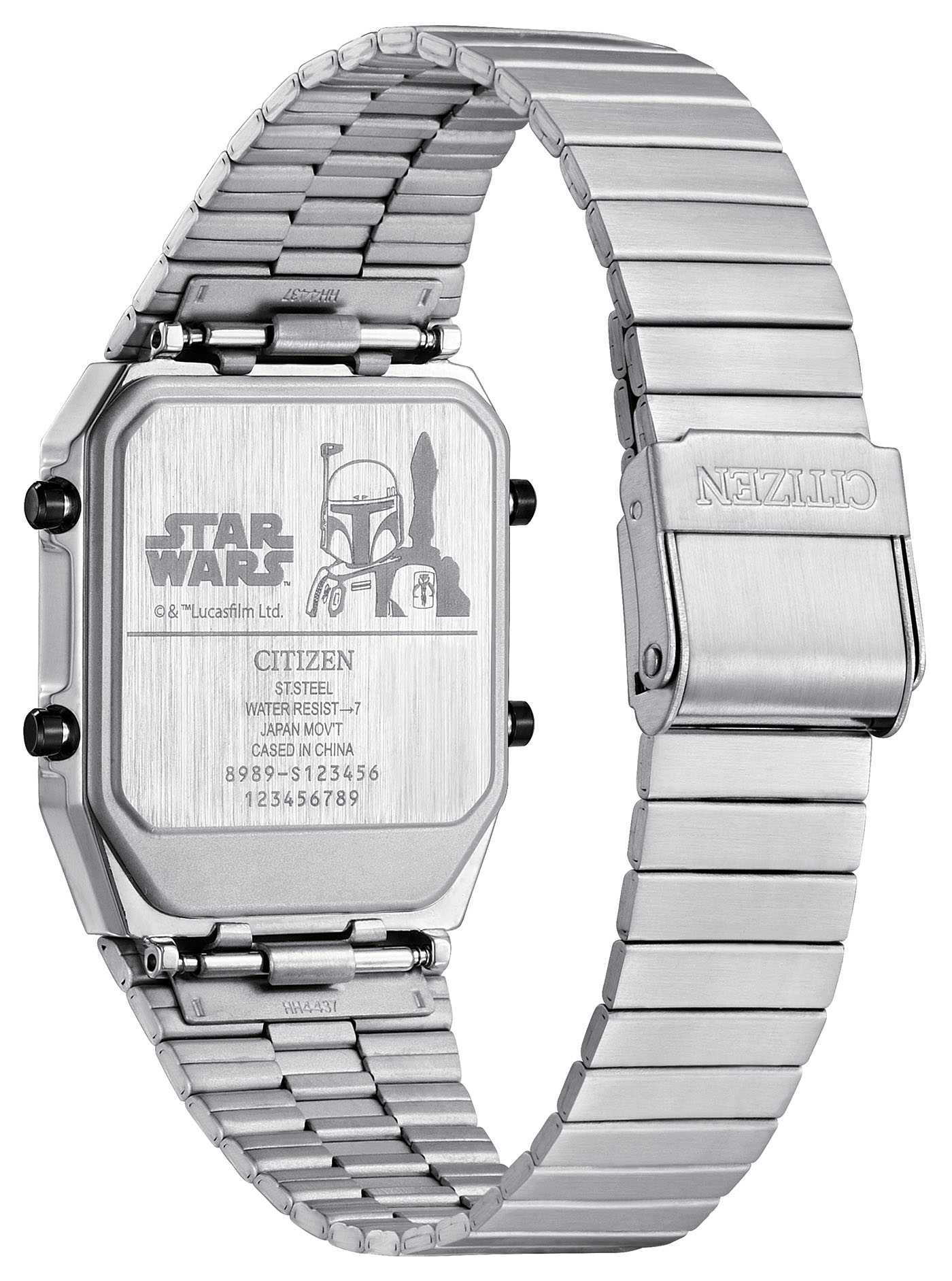 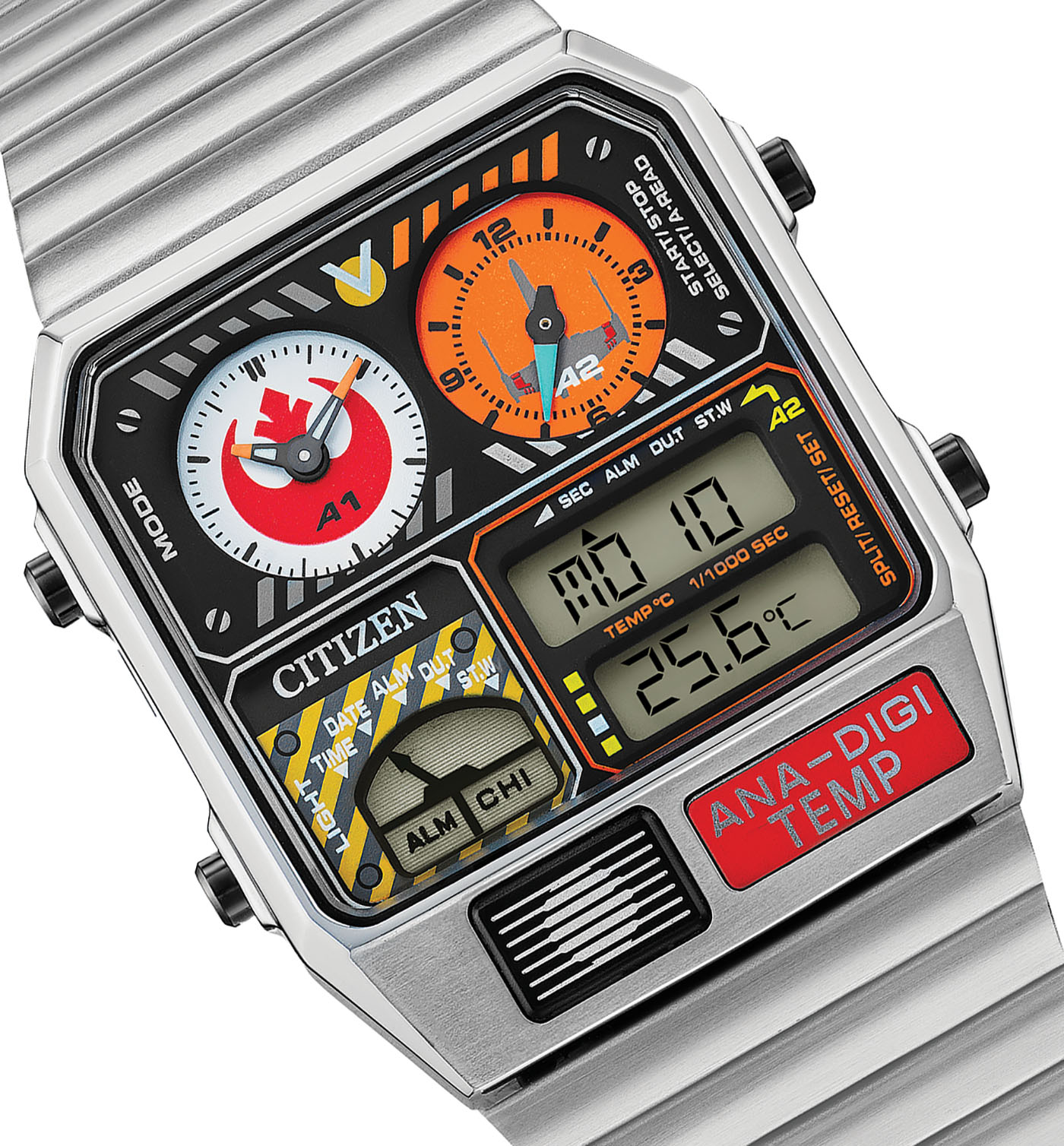 With a vibrant color scheme and a complex yet legible execution, the Citizen Ana-Digi Rebel Pilot is one of the most striking entries in the series. Directly inspired by the iconic orange and white flight suits and helmets worn by rebel pilots in the original films, the Ana-Digi Rebel Pilot’s blend of ‘80s futurism and high-visibility patterns wouldn’t look out of place in the movies themselves. The Rebel Pilot renders the geometric case in a mix of brushed and polished surfaces for a more refined look in initial images, accented with punches of black for the pushers and a blazing red Ana-Digi Temp plaque at 6 o’clock. The dial of the Ana-Digi Rebel Pilot adds bold punches of orange, yellow and white to the classic Ana-Digi Temp dial layout, with highly visible hazard stripe patterns surrounding the 4 o’clock subdial and flanking the analog subdials at 10 o’clock and 2 o’clock. These analog subdials both add some suitably themed graphic touches to the design, with the white main time subdial overlaid with the starbird emblem of the Rebel Alliance in red, while the orange second time zone subdial features a top-down view of the iconic X-wing starfighter as well as a 12 hour hand in contrasting “lightsaber blue.” 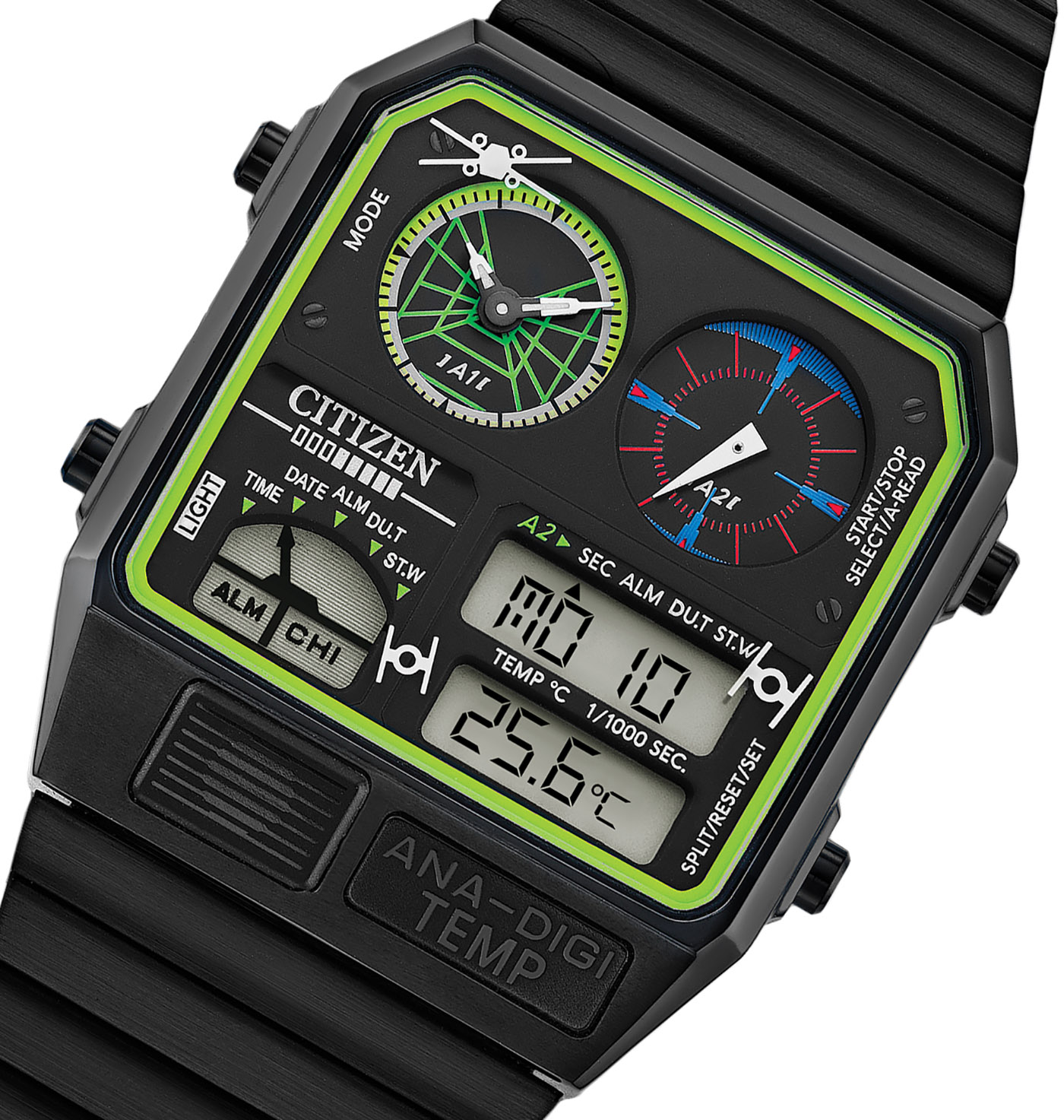 For the Citizen Ana-Digi Trench Run, the brand aims for a more subdued, cockpit instrument-inspired look. The black coated case offers a more serious, purposeful look than its bare stainless steel stablemates, while the lime green outer border of the dial gives the impression of a heads-up display. Both of the analog subdials here take visual cues directly from the classic starfighter designs of the original “Star Wars,” with the main time subdial using the green vector pattern of the X-Wing’s famous targeting computer. The second time zone subdial, on the other hand, is overlaid with the menacing blue and red targeting reticle used in the cockpits of the evil Imperial TIE fighters. This more serious, in-universe take on the design is diminished somewhat by the X-Wing and TIE fighter silhouettes printed across various points of the main dial. 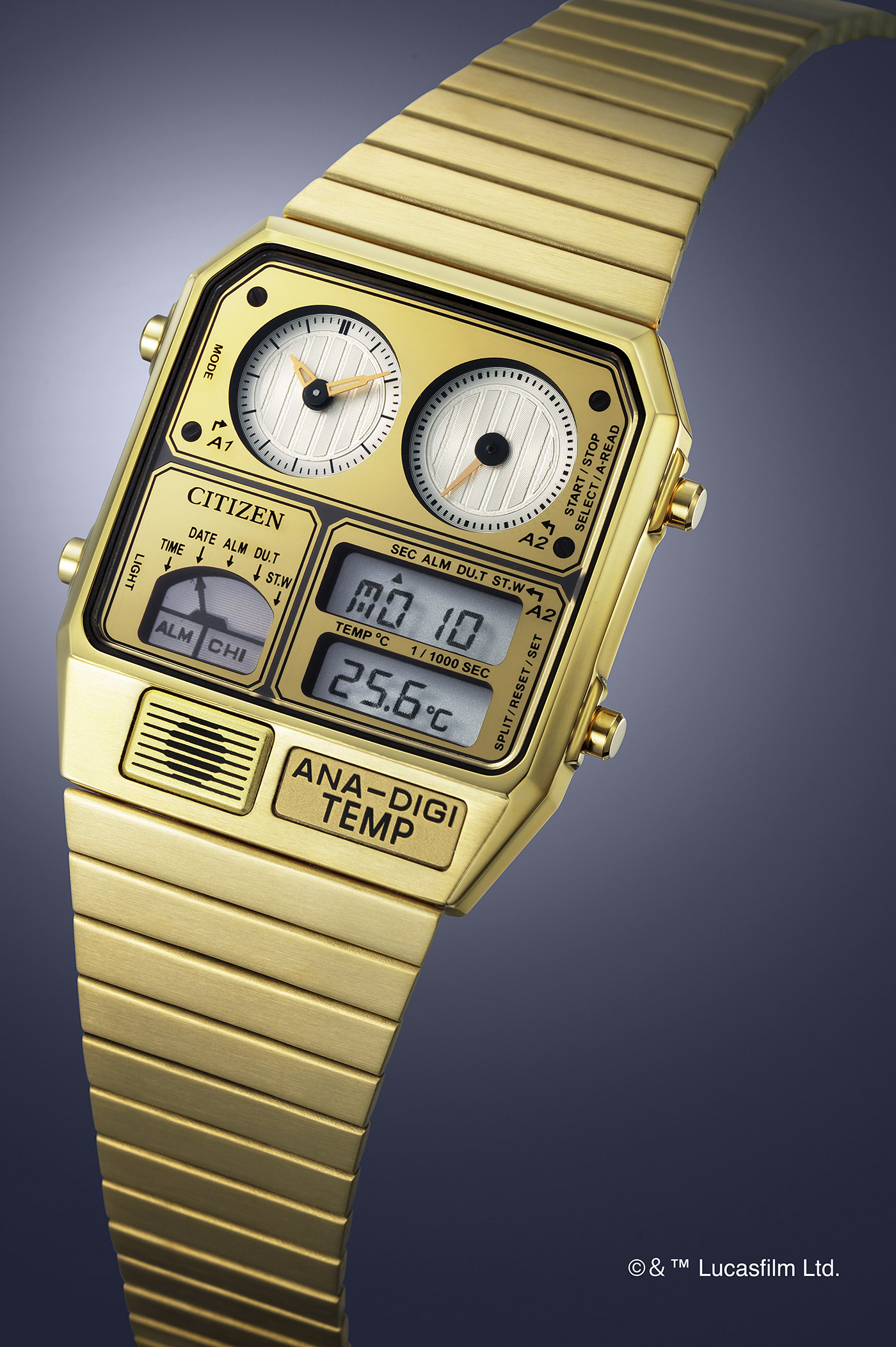 Although it is one of the more directly character-focused and flashy designs of the series, the Citizen Ana-Digi C-3PO may well be one of the most wearable as well. Like the fussy protocol droid that inspired it, the Ana-Digi C-3PO coats its stainless steel case and bracelet in bright gold tone. The monochrome gold look continues through the dial, with clean gold bezels surrounding the subdials flanked by a black base layer. Here, the silver analog subdials are symmetrical, with a striped and snailed texture that doesn’t immediately visually register as “Star Wars” in initial images. With a wider perspective including the black central disks for reach of the hands, these abstract textures resolve into C-3PO’s luminous eyes. It’s a subtle, slickly integrated visual nod that reveals itself gradually to first-time viewers. 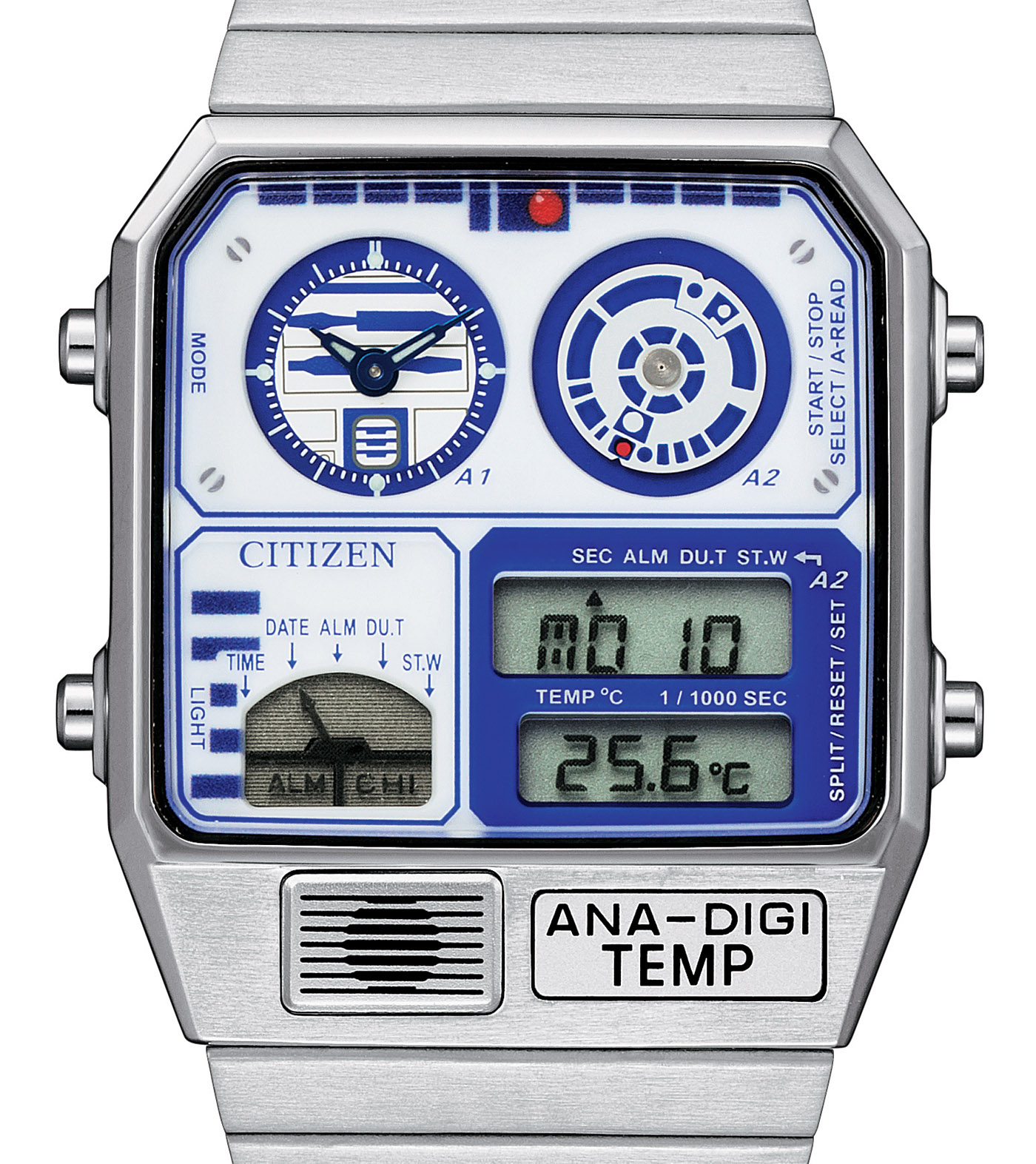 Of course, there can’t be C-3PO without his plucky partner, and the famous astromech droid gets his due with the Citizen Ana-Digi R2-D2. While the case with its full stainless steel finish is arguably the cleanest of the line, the dial design is graphically complex and detailed. Every visual touch here, from the white and blue colorway to the shape of the stripes flanking the 8 o’clock subdial, is taken directly from the design of the namesake droid. This complex take leads to some arcane visual decision making, including the chassis pattern that forms the 10 o’clock subdial, but the real visual centerpiece here is the 2 o’clock second time zone subdial. Citizen eschews a traditional hand here in favor of a disk patterned after R2-D2’s head, with a red dot pointing to the current time. Without a set of indices, however, this feels more like a novelty than a useful tool in initial images. 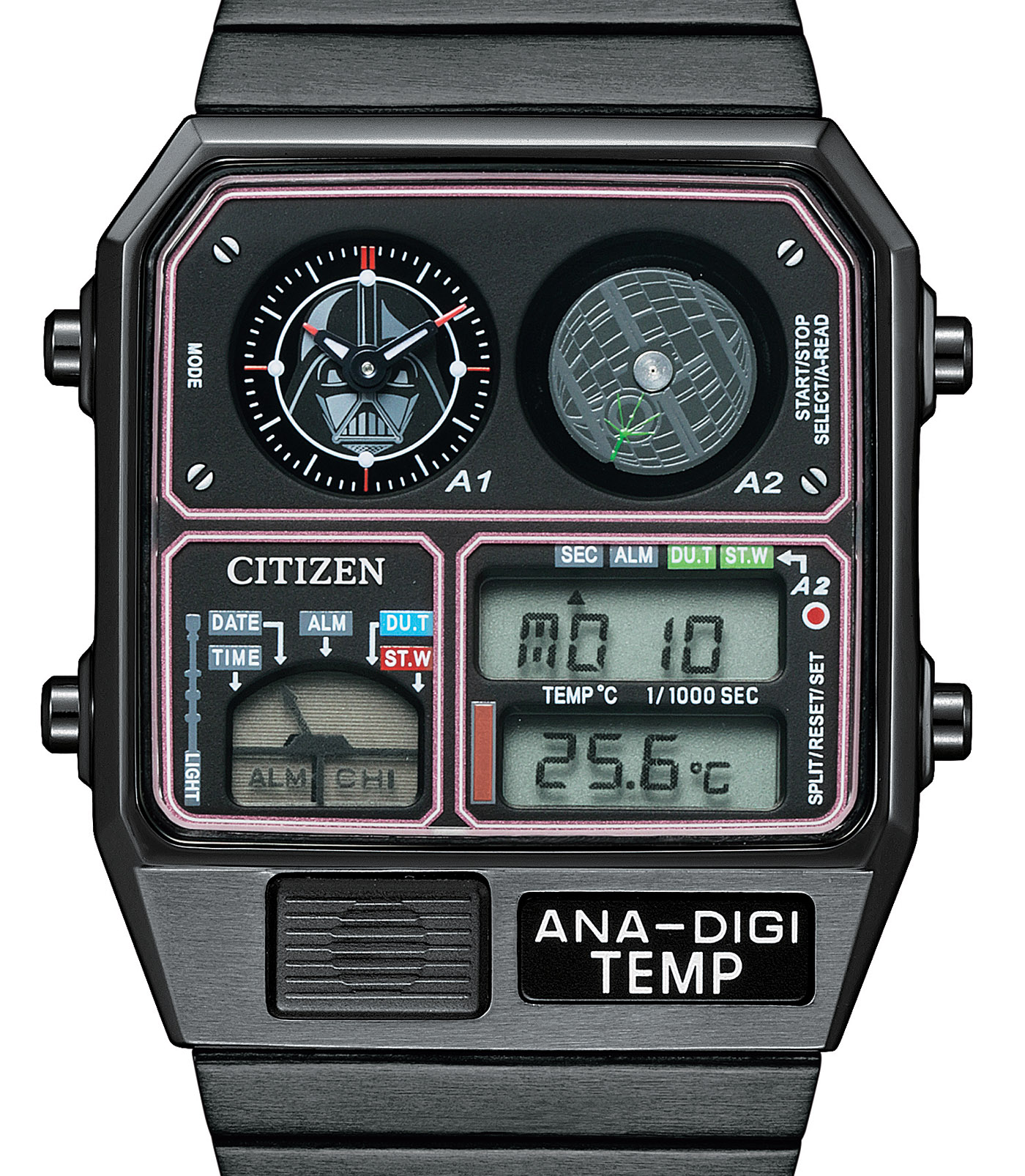 Inspired by one of the most famous villains in all of film, the Citizen Ana-Digi Darth Vader aims to capture the imposing black look of the character. Naturally, both the case and bracelet feature a full black coating, and the dial is nearly entirely black as well with small highlights in red, green, and blue. Here, the subdials are taken up with more overt character iconography than some of its stablemates. The center of the 10 o’clock subdial is taken up with Darth Vader’s sinister helmet, and like the Ana-Digi R2-D2 the Ana-Digi Darth Vader foregoes a 12 hour hand in the 2 o’clock subdial in favor of a stylized disk. Here, the motif of choice is the Death Star space station, with its green superlaser beam marking out the current time. 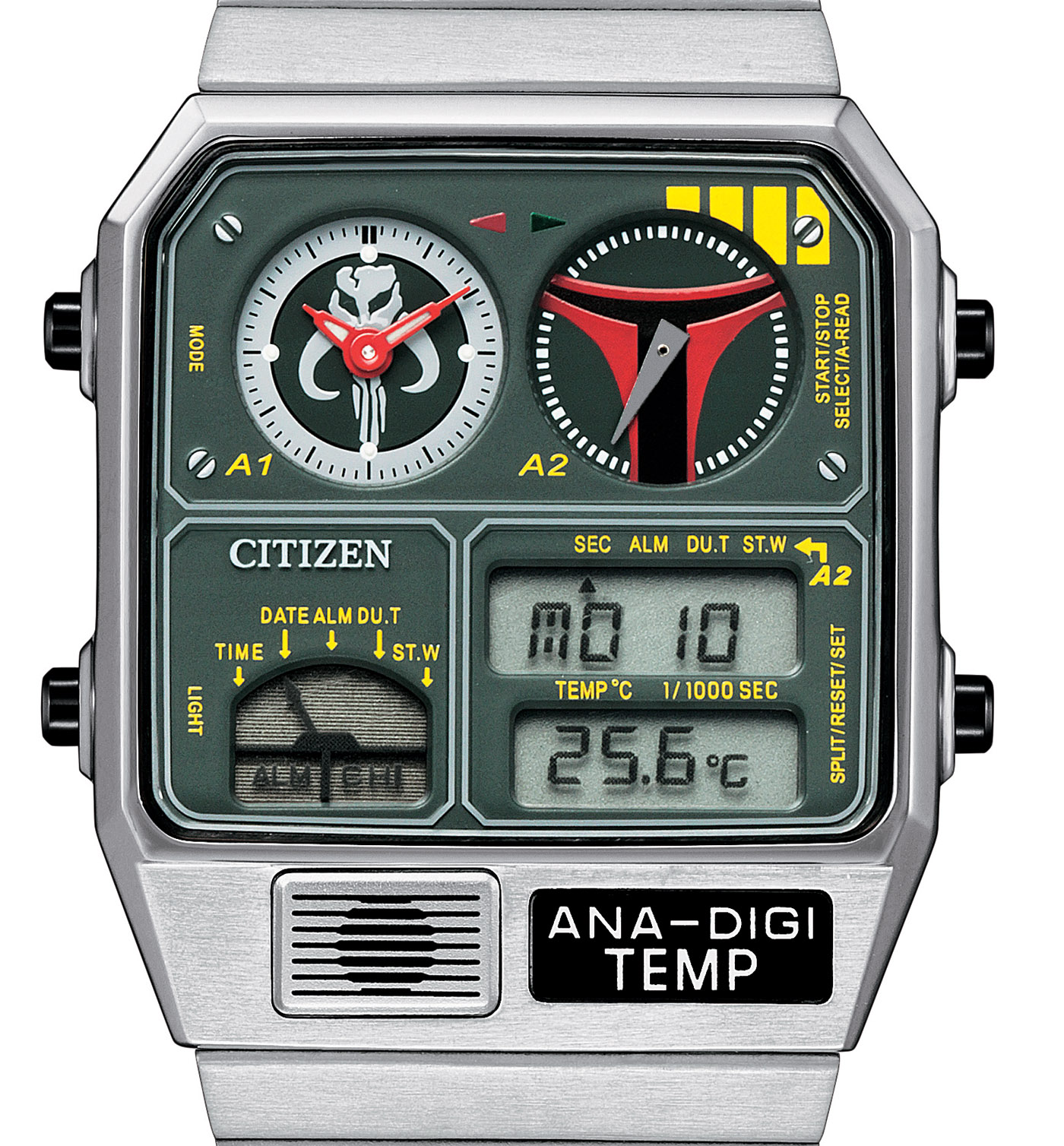 Last in the series is the Citizen Ana-Digi Boba Fett, with a matte green and red colorway inspired by the galaxy’s most dangerous bounty hunter. The case treatment here is brushed stainless steel with black touches on the pushers and 6 o’clock plaque for a more rugged look in initial images. Likewise, the dial aims to echo the tough, purposeful look of Boba Fett’s olive and red armor, with yellow highlights pulled directly from the character’s helmet. The subdials here both reference this fan favorite armor as well, with the 10 o’clock subdial sporting the Mandalorian mythosaur crest seen on the character’s shoulder pauldron. For the 2 o’clock second time zone, Citizen overlays the T-shaped visor of Boba Fett’s helmet over the 12 hour scale.