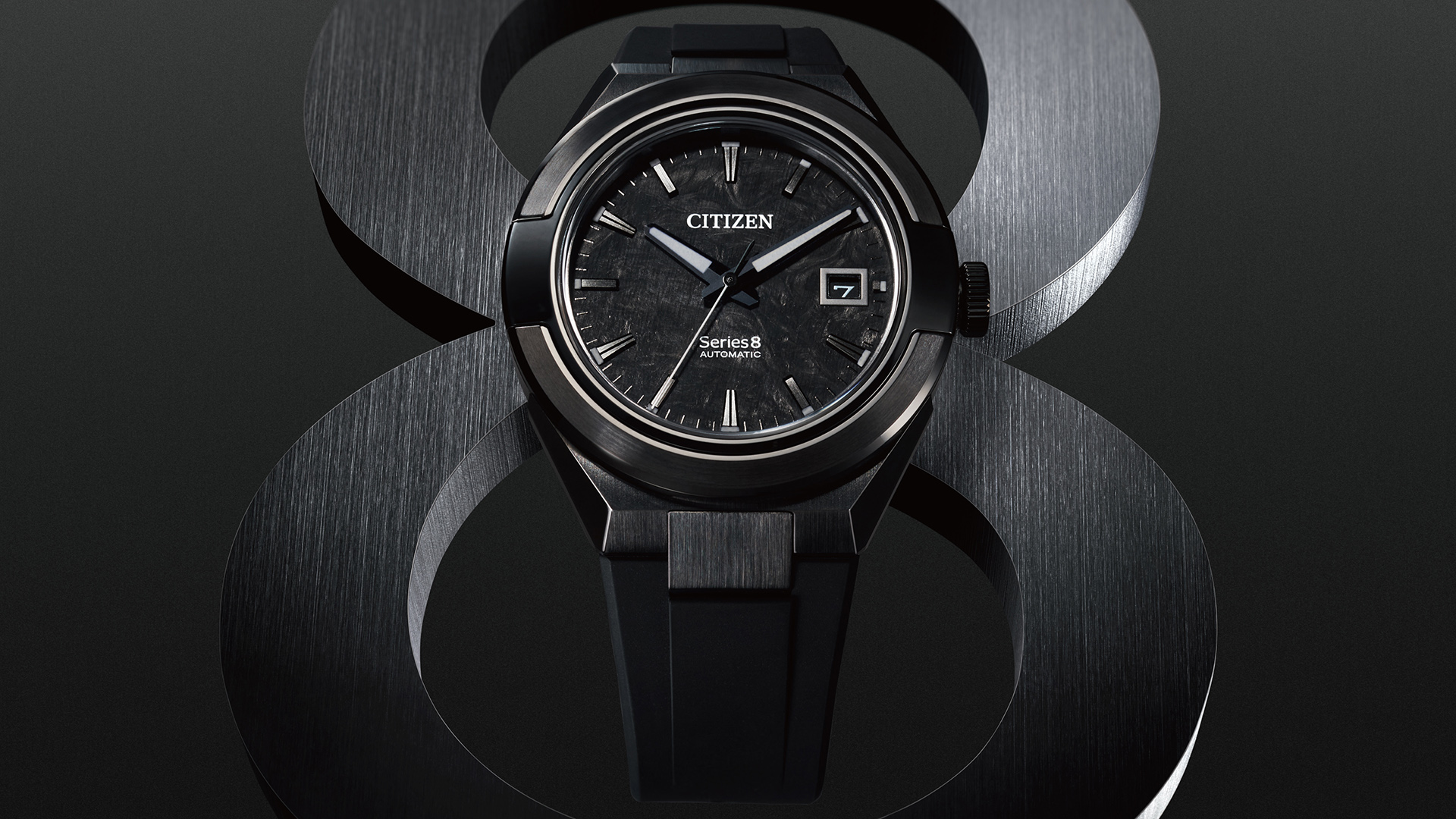 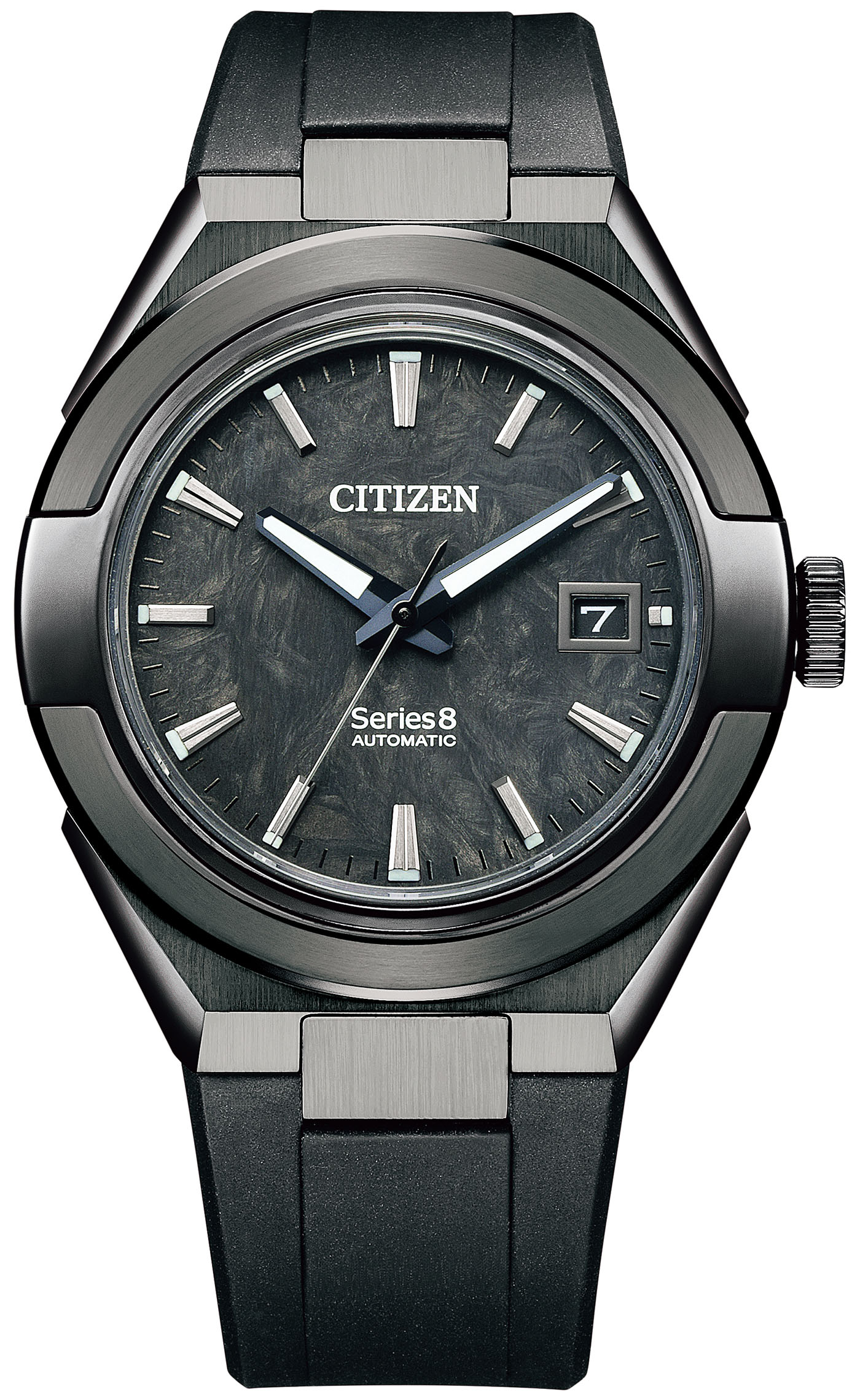 Upon its revival in spring 2021, the Citizen Series 8 line immediately drew enthusiast attention for its stylish integrated case designs and focus on high-performance in-house mechanical movements. As the collection enters its second year, Citizen has already expanded the Series 8 family to include multiple case styles, uniquely vibrant dial finishes, and a broad variety of executions. To celebrate its first anniversary, Citizen aims to create the most aggressive and striking Series 8 to date. The new Citizen Series 8 870 Mechanical First Anniversary Limited Model brings a stealthy black DLC look to the brand’s uniquely Japanese take on the integrated sports watch, replete with unique materials, quality finishing, and an impressively competitive in-house movement.

Although there is no shortage of angular, integrated-bracelet sports watch cases in the current luxury watch landscape, the 40.8mm-wide black DLC-coated stainless steel case of the Citizen Series 8 870 Mechanical First Anniversary Limited Model takes a decidedly different tack in images than many of its rivals. Rather than aiming to emulate the Genta-style looks of the ‘70s, this case instead goes in a more contemporary and independent direction in images. With a unique layered bezel design and “box flare” faceted case sides, there is an overall focus on creating dynamic planes to showcase its finishing. Citizen’s finishing for the Series 8 870 Mechanical First Anniversary Limited Model is impressively varied, ranging from the familiar horizontal brushed and polished surfaces of the main case to a sharply differentiated split between radial brushing and deep matte blasted surfacing on the bezel. The switch to an all black DLC look for this new model gives the integrated design a sportier, more aggressive character, and should help to slim down the already manageable 11.4mm overall thickness on the wrist. Citizen completes the case with a sapphire display caseback, shining a spotlight on its in-house movement, but still rates the case for a sporting 100 meters of water resistance. 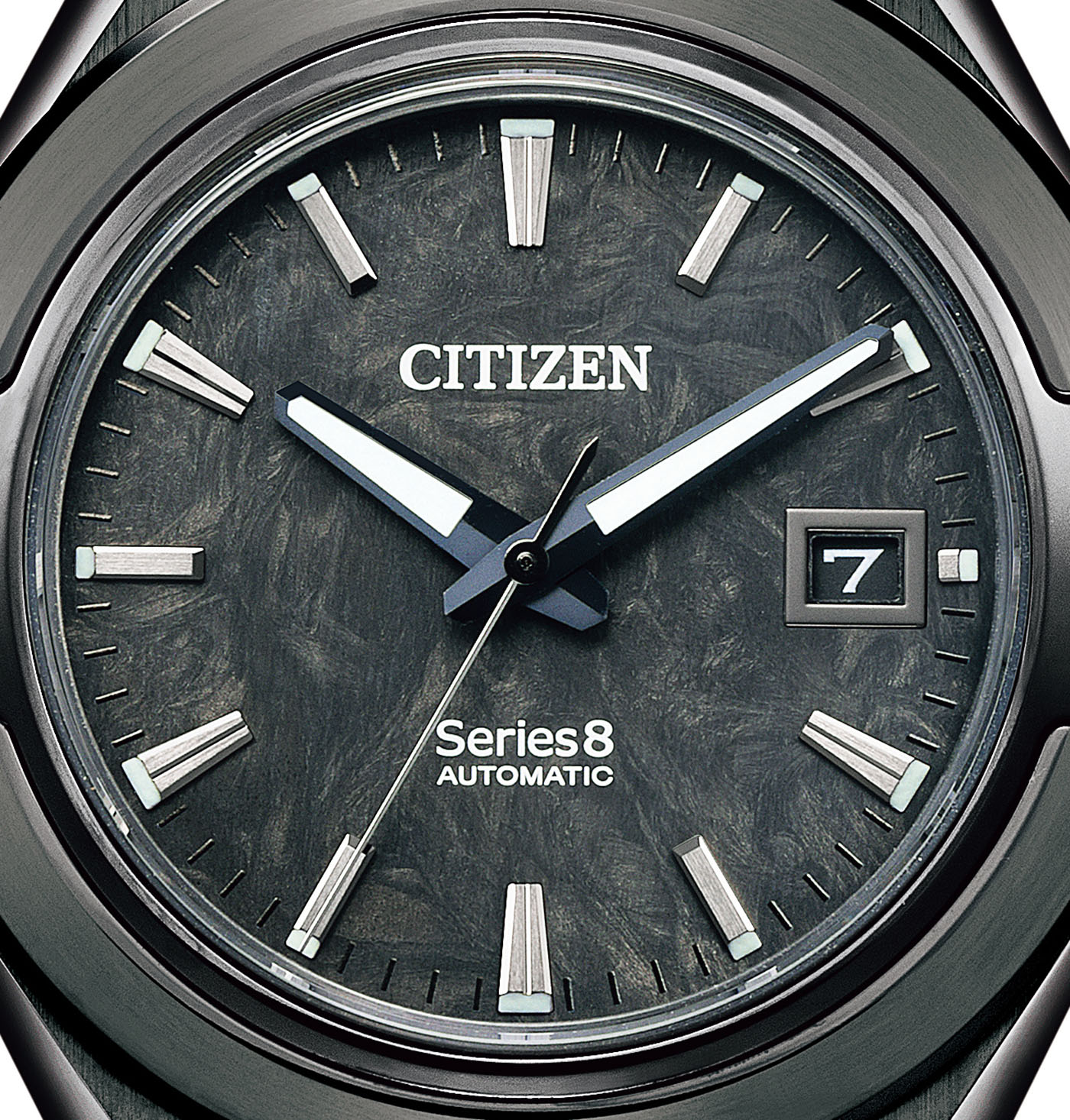 For the dial of the Series 8 870 Mechanical First Anniversary Limited Model, Citizen blends the pared-back minimalist layout of its stablemates with a moody new black-on-black execution. The dial surface of itself is the clear focal point in images, with a dynamic swirling blend of gray tones courtesy of its forged carbon material. Forged carbon has become an increasingly common material for high-end cases in recent years, but remains a relative rarity in dial designs, especially at this price point. Citizen complements this striking material with a set of broad faceted hands in black, along with simple black printed markings for the minutes scale. This dark monochrome layout allows the brushed and polished applied indices to stand out dramatically in images, which should aid significantly in legibility. The Series 8 870 Mechanical First Anniversary Limited Model’s 3 o’clock date window may raise some enthusiast eyebrows, however, with a curiously broad frame that does not match the finishing of the indices or hands in images. 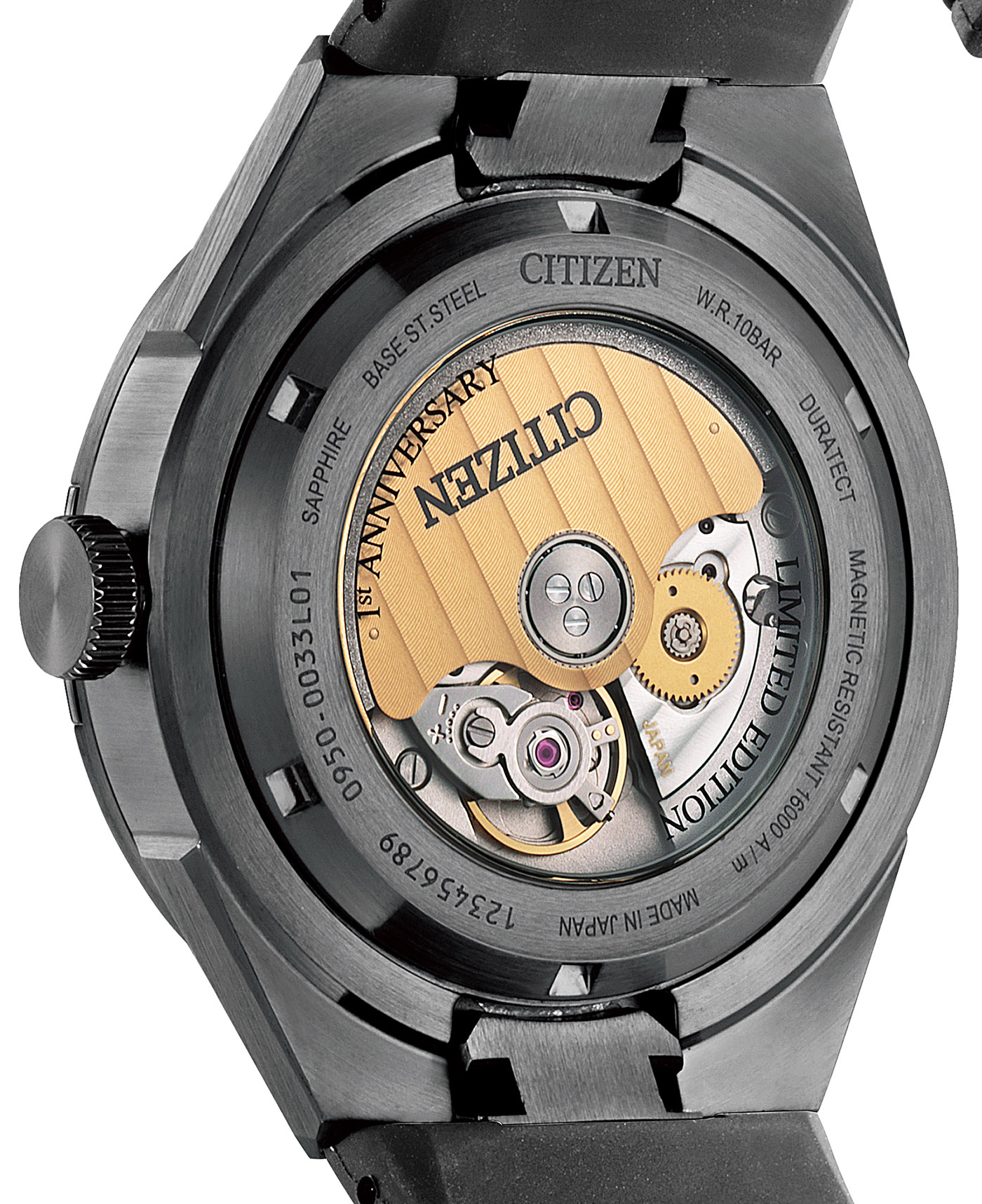 Inside the Citizen Series 8 870 Mechanical First Anniversary Limited Model beats the brand’s in-house Calibre 0950 automatic movement. Despite some similarities in architecture with the ubiquitous Miyota 9000 series, the Calibre 0950 is a completely different design with impressively robust performance. Citizen rates the Calibre 0950’s accuracy at a sharp -5/+10 seconds per day, and claims a respectable 50 hour power reserve at a 28,800 bph beat rate. Citizen also mentions the movement has enhanced magnetic resistance, but does not provide precise resistance figures. The Calibre 0950’s finishing is solid if unspectacular in images, with broad striping across both the bridges and the gold tone rotor. Citizen finishes the watch with a sporty integrated rubber strap in black to complete the monochrome look.