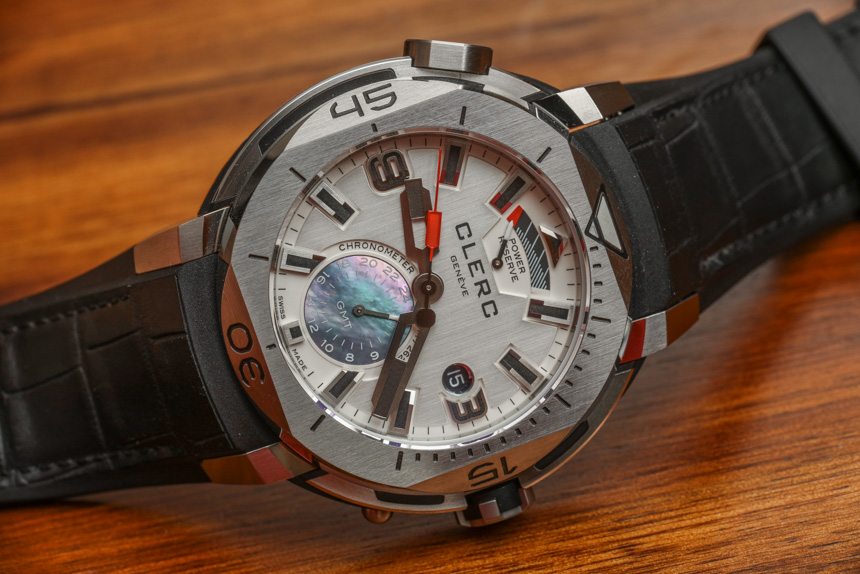 Speaking of clever, we should also talk about the lugs of the Clerc Hydroscaph GMT Power Reserve Chronometer. These look to be your standard solid lugs, albeit with a fairly steep angle to help accommodate smaller wrists. As it turns out, they are actually articulated, allowing them to pivot inwards a bit, the better to fit your wrist, along with the adjustable deployant clasp setting on the strap (our review loaner had a natural rubber strap with a croc pattern embossed on it). Along with making for a comfortable fit, this also gave the watch some “wiggle” to allow it to move a bit with your wrist through the day. While no one would consider the 168g of the 43.8mm Clerc Hydroscaph GMT Power Reserve Chronometer to be light, I found it to be very comfortable, and well within the realm of other divers I have strapped to my wrist. While I did not dive into any bodies of water while I had it on, it was a great partner as I headed into the office, as well as with a suit over the weekend. Alongside my own admiration, the watch definitely drew appreciative stares from those who caught it peeking out from under my cuff. For me, the Clerc Hydroscaph GMT Power Reserve Chronometer is a great crossing of a lot of things I really like with watches (in terms of looks and complications), as well as the attention to detail that really makes the case for something like this calling my wrist a home. I should point out that this is really more than the usual mental exercise we reviewers go through of whether or not we could see ourselves buying and wearing the watch. That is something we do with all watches, of course, and I tend to be in the “Mikey likes it” camp with watches. This means that I can generally find something redeeming in a watch that I choose to review (those I choose not to, that’s a different story). Which makes that question of buying/wearing just another routine checklist sort of a question that I run through. Given the number of watches we’re fortunate to see in the course of a year, we can become almost inured to what we’re doing, and the question doesn’t register as something we’d actually follow through on – most of the time. This watch, the Clerc Hydroscaph GMT Power Reserve Chronometer, managed to scratch through that crunchy candy shell, and turned the question from a quick mental exercise into something that was meriting some thought that could lead to action. Interestingly, this coincides with my toying with the idea of becoming a “one watch” guy. I am not quite ready to make that leap, but if I did at least get down to being a “one diver” guy, I think the Clerc Hydroscaph GMT Power Reserve Chronometer would be at the top of that list, marrying the sport watch credentials with a clean, refined, and very unique look. For now, it definitely goes onto my personal attainable grail watch list with a price of $7,150. clercwatches.com

>Brand: Clerc
>Model: Hydroscaph GMT Power Reserve Chronometer
>Price:  $7,150
>Would reviewer personally wear it: Yes, yes and, um, yes.
>Friend we’d recommend it to first: You’re on the hunt for a watch with serious adventuring specs that looks rather unlike just about any other diver out there.
>Worst characteristic of watch: If I had to nitpick at anything, it would be the crown. Oh, and I suppose I would not mind it being a few millimeters thinner.
>Best characteristic of watch: In general, the dial; in specific, that mother-of-pearl GMT subdial.