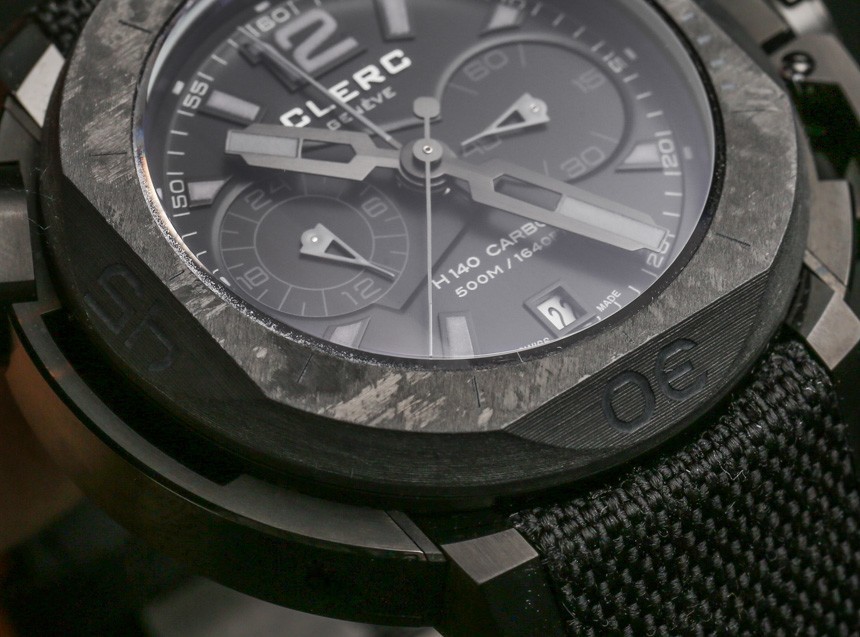 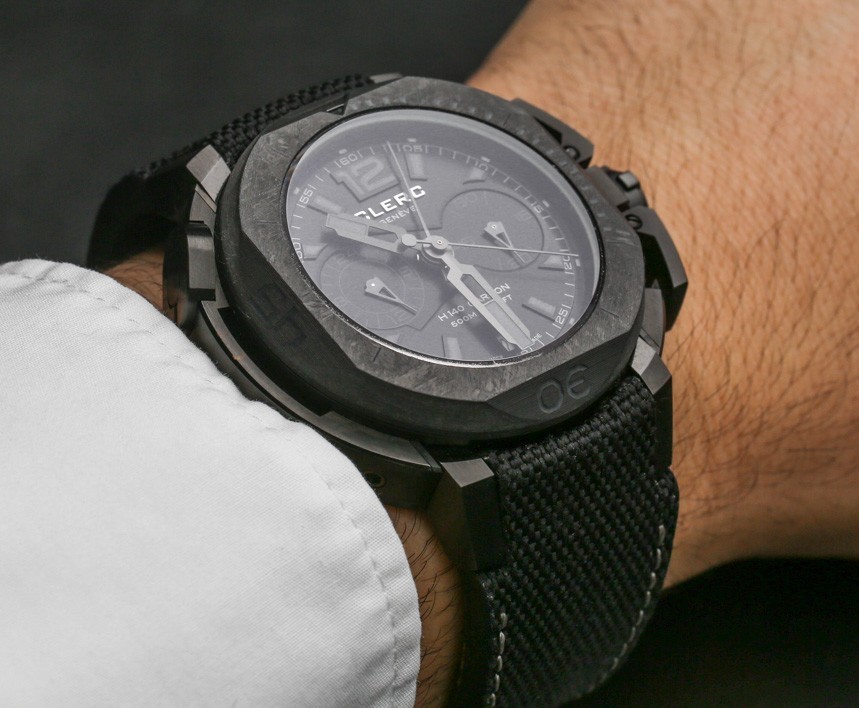 Slowly but surely, carbon has found its way into most luxury industries and took its place as one of the cooler 21st century materials. Along with a myriad other, less reasonable uses, it can be found in car dashboards, furniture, portable device cases, pens, and of course, watches. A lesser known fact is that there are many different types of this (nearly) eternal material, and with the Clerc Hydroscaph H140 Carbon Limited Edition Chronograph, we are looking at one of its latest generations, called NTPT Carbon. Let’s (re-)discover the material, and see what the Clerc Hydroscaph H140 Carbon Limited Edition Chronograph watch has to offer.

First of all, the Clerc Hydroscaph H140 Carbon Limited Edition Chronograph watch is not fully dressed in carbon: it has a 49.86 millimeter wide stainless steel case (including side protectors), which has been black DLC coated, and a 44mm wide bezel bezel that is done in a carbon material that is very reminiscent of NTPT carbon. It is not without reason if this four letter acronym sounds familiar: about a year ago, Richard Mille debuted the first watch – with a full case – made from NTPT, this highly complex version of carbon that is composed of 30 micron thick carbon fibre layers woven together and stacked on top of another. 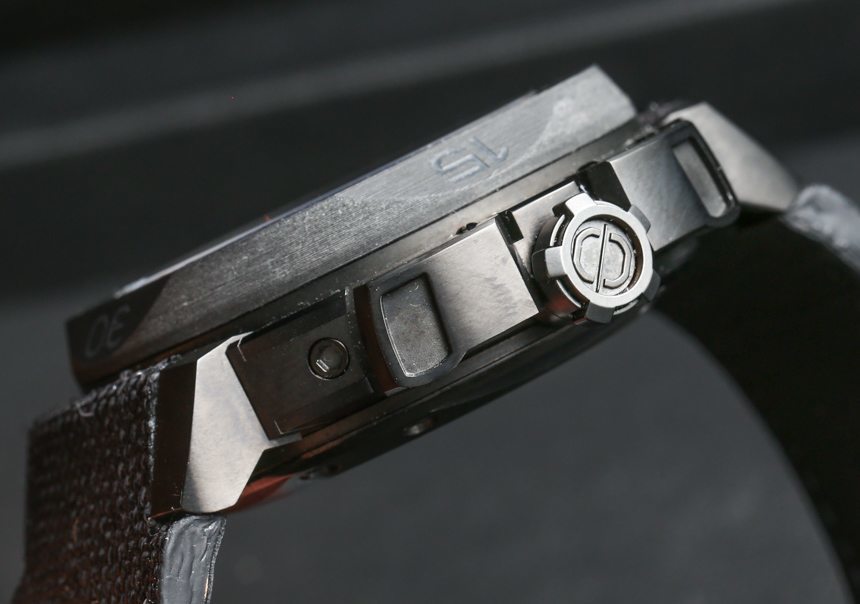 The material is said to offer enhanced resistance to shocks and “microfissures,” and while there is no word on scratch resistance, it should perform well in that department as well, if for no other reason then thanks to the extreme heat and pressure that was used to finalize and strengthen the material. In fact, this type of carbon – thanks to the unfathomably large amount of carbon fiber layers in its construction – is extremely difficult to machine and is said to subject cutting tools to excessive wear.

NTPT is named after the Swiss company that manufactures it – North Thin Ply Technology – the same company that originally used this material to create the masts for some high-performance sailing boats. Consequently, it appears that either the exact same company is sourcing this material to Clerc now or they have found one that is able to deliver a material that in many ways is similar to what has been supplied to Richard Mille about a year ago. This may sound odd but it is nonetheless an extremely common practice within the very closed circles of the Swiss watch industry and its incredibly limited number of specialized suppliers. Nevertheless, Clerc clearly is among the first brands to use this kind of material in a watch, and with the Clerc Hydroscaph H140 Carbon Limited Edition Chronograph, they are also aiming for a considerably more accessible price point. 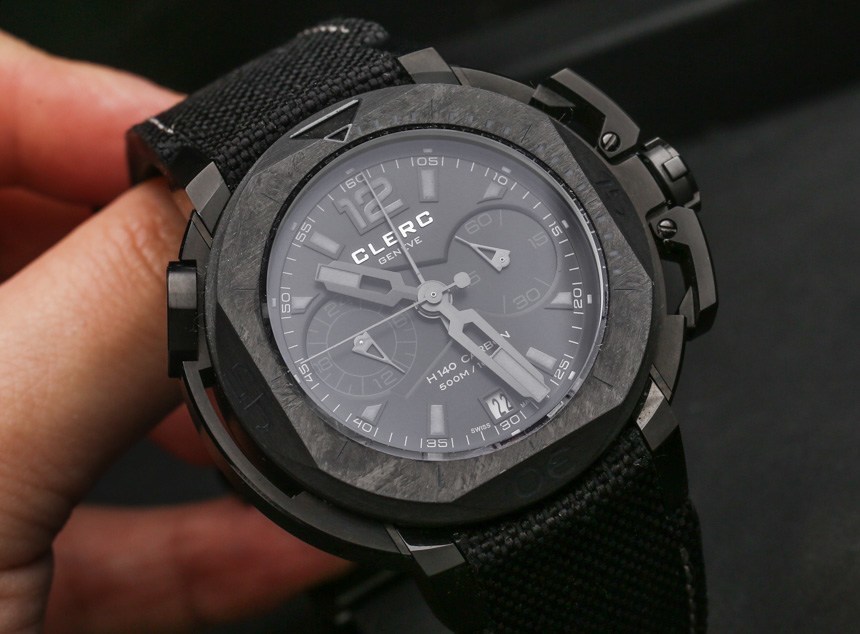 As far as looks are concerned, the case – largely owing to its highly complex design that comprises 103 components – offers a blend of clean lines and surfaces as well as well-defined, angular elements which lend the Clerc Hydroscaph H140 Carbon Limited Edition Chronograph a more masculine appearance. The sleek, matte black of the DLC case, as well as the monochromatic dial contrast well with the random texture of the interestingly shaped – and unmistakably Clerc – rotating bezel. As is usual for Clerc dive watches, the bezel can be rotated by using the little crown located at the 10 o’clock position: it has a little flap which has to be turned out, and with that, the bezel can be rotated in the counter-clockwise direction. 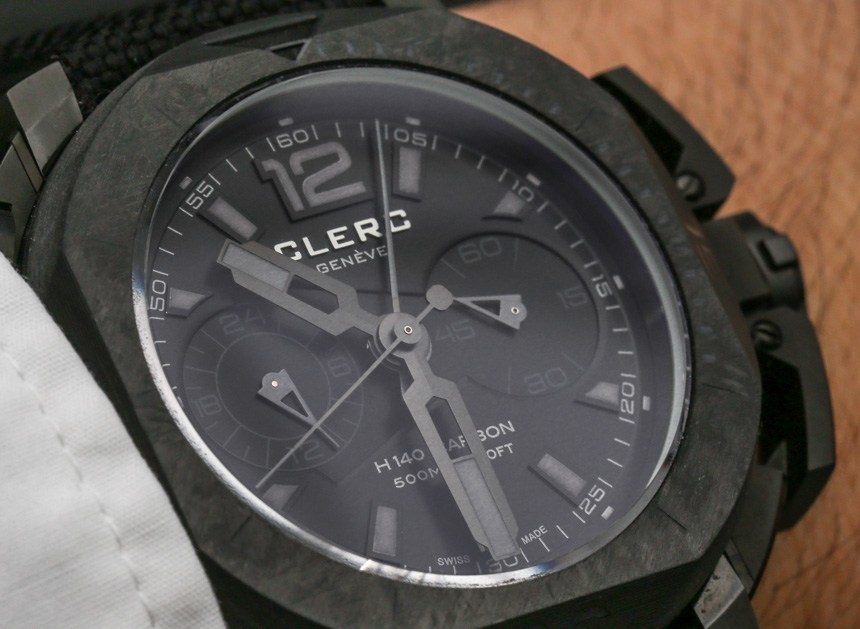 Another highly unusual feat is that the Clerc Hydroscaph H140 Carbon Limited Edition Chronograph is water resistance to a depth of 500 meters, a seldom seen figure among chronographs. The issue is that while gaskets around the bezel, case back, and the crown can be relatively easily enforced in a way that they ensure resistance to such excessive pressure, chronograph pushers are notoriously problematic and more difficult to get sealed properly.

Legibility is of course compromised, as despite the bold and wide hands and the relatively large indices, in low-light situations, the dial can be quite difficult to read at a glance – the subdials with their “stealth” paint being all the more affected. Clearly, the emphasis was on a more stealthy kind of appearance, with absolute legibility taking a second place to a high-tech, perhaps “black ops” inspired looks. 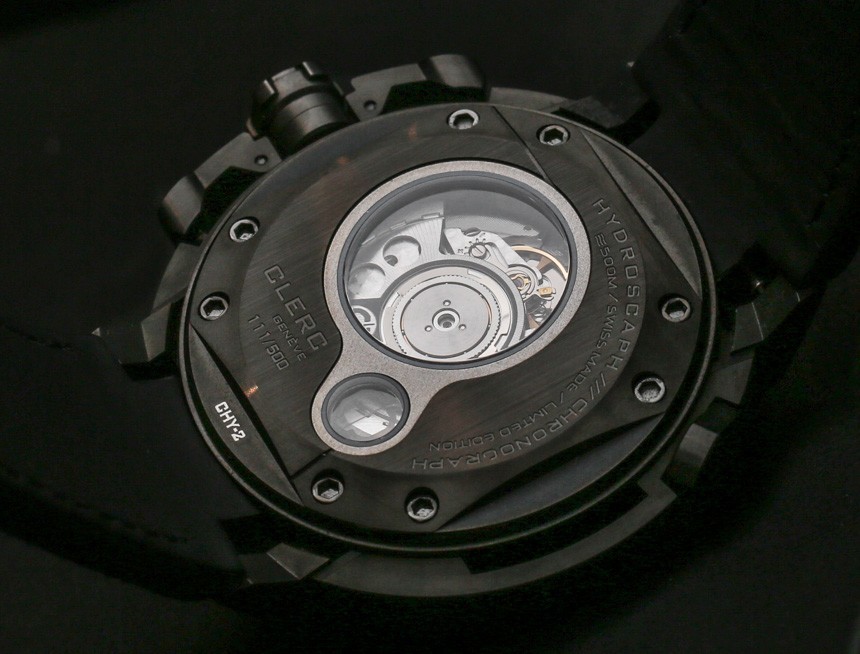 The caseback has the trademark double sapphire opening that provides an interesting look at the “exclusive C608 calibre.” Clerc claims that the C608 automatic movement is not in-house but is exclusive to them. Indeed, the movement offers the more scarcely encountered “central chronograph” as its main complication: as opposed to traditional chronographs where the minutes are displayed on a subdial, with the Clerc Hydroscaph H140 Carbon Limited Edition Chronograph has two centrally mounted hands for the chronograph, one for the seconds and the other for the minutes of the stopwatch.

The two subdials which have been freed up thanks to this modification show the running seconds at 3 o’clock and and the day-night display for a second time zone at 9 – although there arguably are other more useful features which could have been included here, such as a GMT or second time zone complication, or an hour counter for the chronograph – unlike perhaps many watch enthusiast out there, I like to be able to keep track of over 2 hour long journeys. 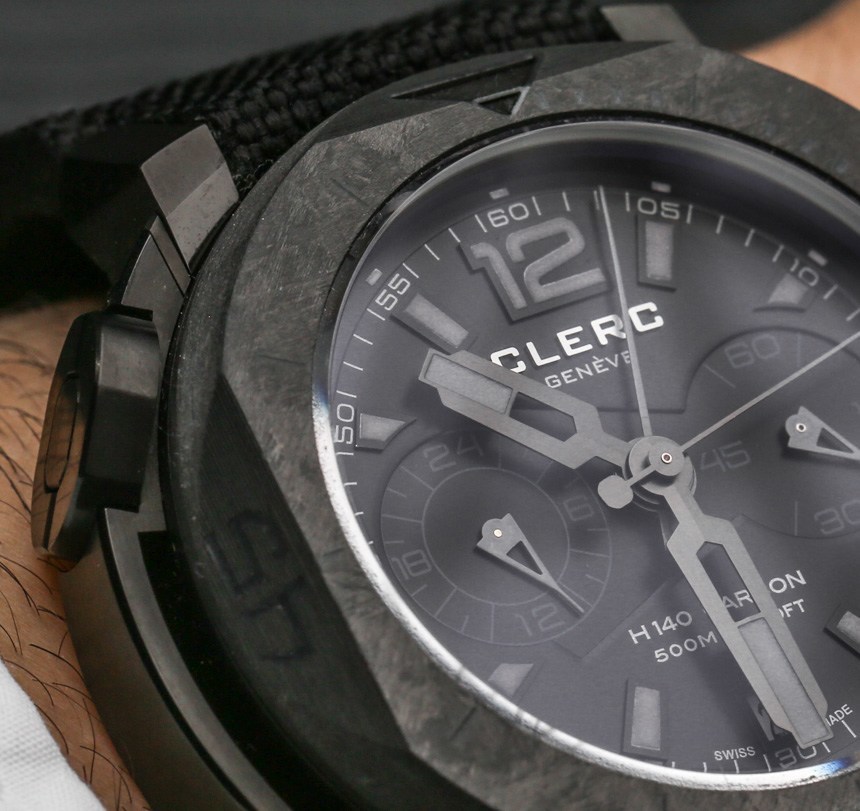 In conclusion, the Clerc Hydroscaph H140 Carbon Limited Edition Chronograph – this limited run of 140 pieces, made to mark the 140th anniversary of the founding of the Clerc company – is an interesting offering that brings a well-balanced mix of modern materials, textures, and design elements to the table. The cool technology involved in the manufacturing of some of its components, the relatively reasonable price point, and the unique design may render it a suitable competitor for some of the bigger makers of luxury sports watches. Price for the Clerc Hydroscaph H140 Carbon Limited Edition Chronograph is $12,900. clercwatches.com