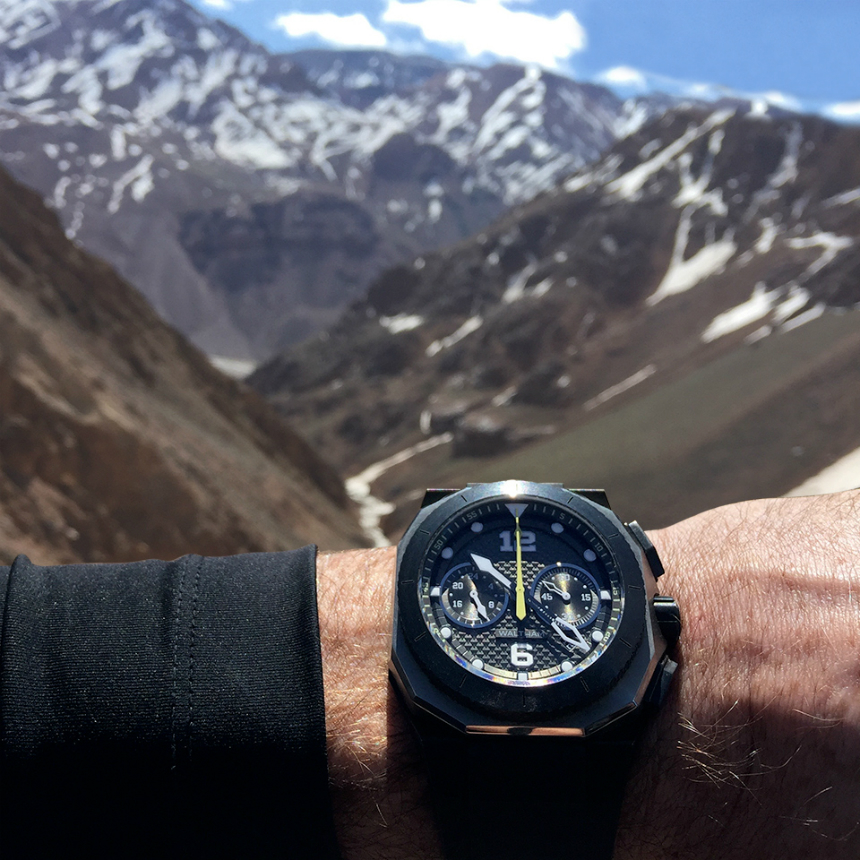 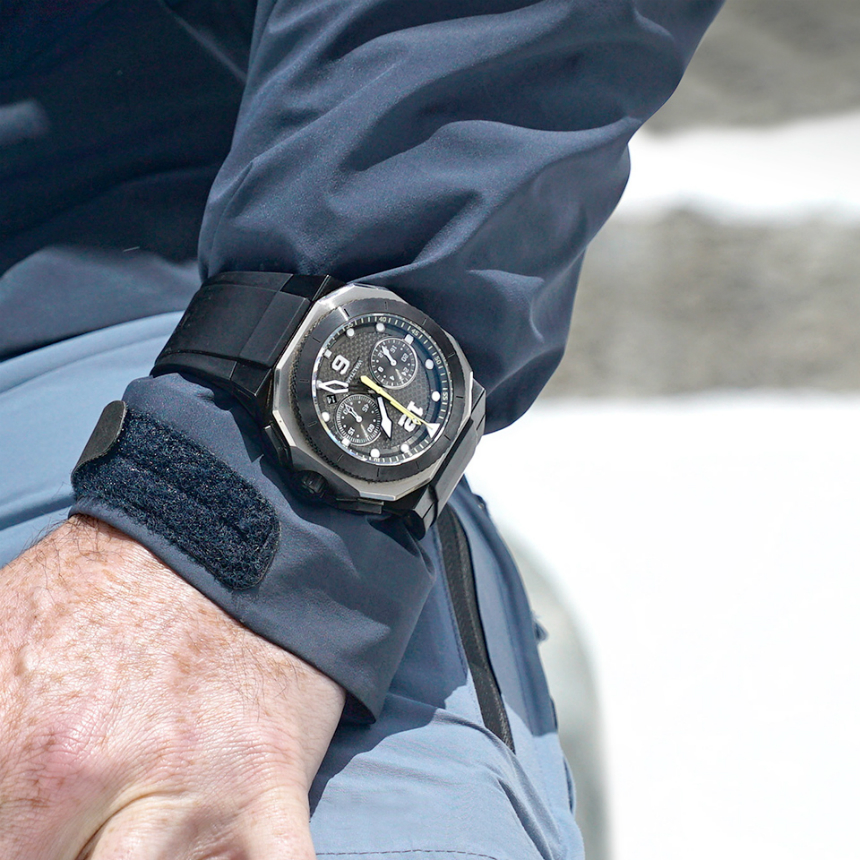 In December 2015, Hugh Taylor and Luke Blezard attempted to climb Mount Aconcagua in the Argentine Andes, the tallest mountain outside the Himalayas, at 6,962m. As well as raising money for two South American charities, Haciendo Camino and Help them HOPE, they wanted to find out how mechanical watches stood up in high-altitude climbing and extreme cold. They took three Waltham watches.

In part one, I explained how my attempt to summit Aconcagua, aside from achieving a personal goal, was a chance to test out my theory that mountain climbing is the only sport in which a mechanical watch is still better suited than a digital alternative. We brought three watches from the Waltham Aeronaval Vanguard collection – the XA Pure (small seconds), ETC Black Matter (chronograph), and CDI Eclipse (GMT). The pieces are all in Titanium G5 cases, so despite the PVD-coated tough looks they are all pretty lightweight. Now, after a gruelling 15-day trip, I will tell you whether or not I still think my theory of mechanical superiority is accurate, and how my Waltham watches suited high-altitude mountain climbing. 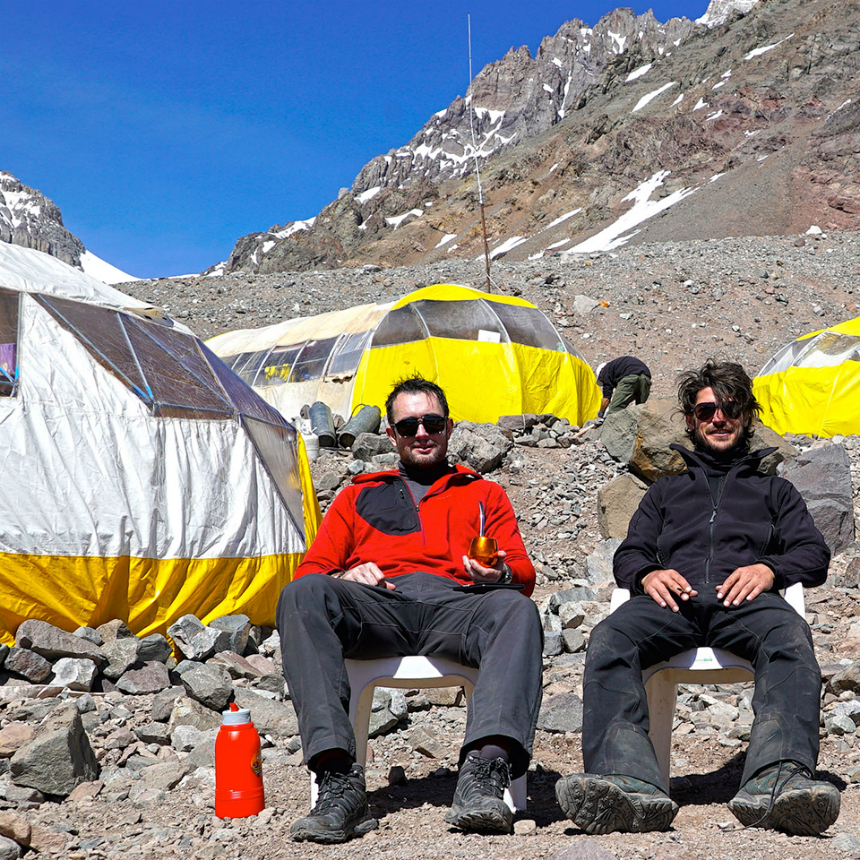 Luke and I chilling out during a rest day at Base Camp. When the sun was up and the wind took a rare break, it felt fantastic to get some warmth in the bones. 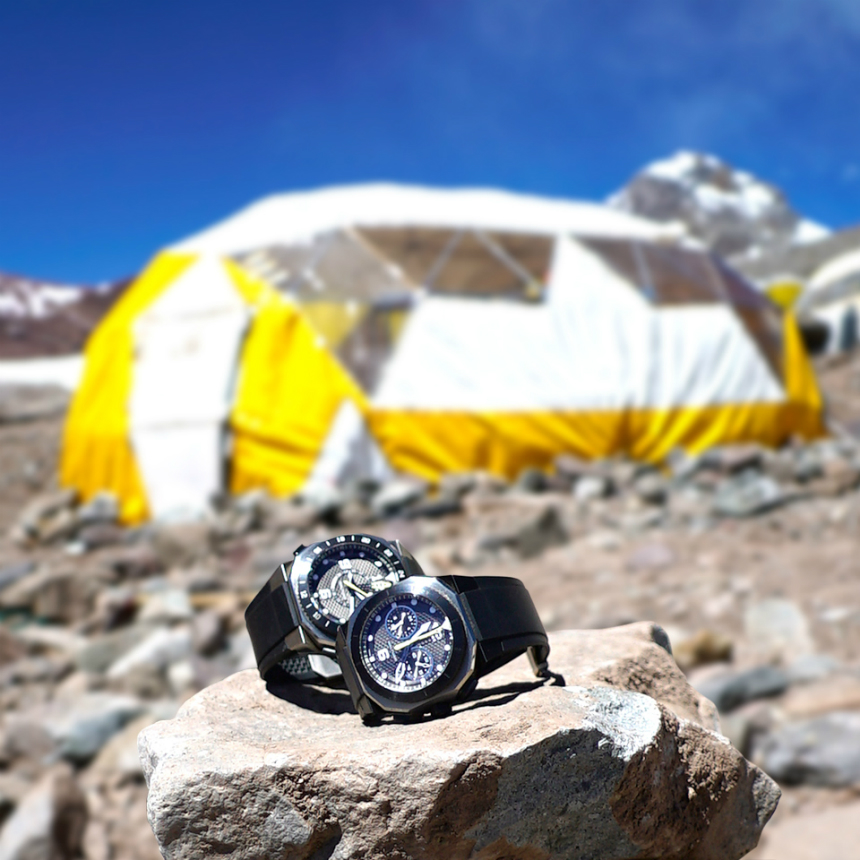 Before the trip, I had already climbed a couple of smaller mountains and had read a fair number of books on mountain climbing. My argument was that, seeing as timing is so important in the final days, it would be useful to wear my watch on the outside of my jacket. This meant it would be exposed to temperatures between -10°C and -35°C, with a wind-chill factor putting the experienced temperature nearer to -60°C. 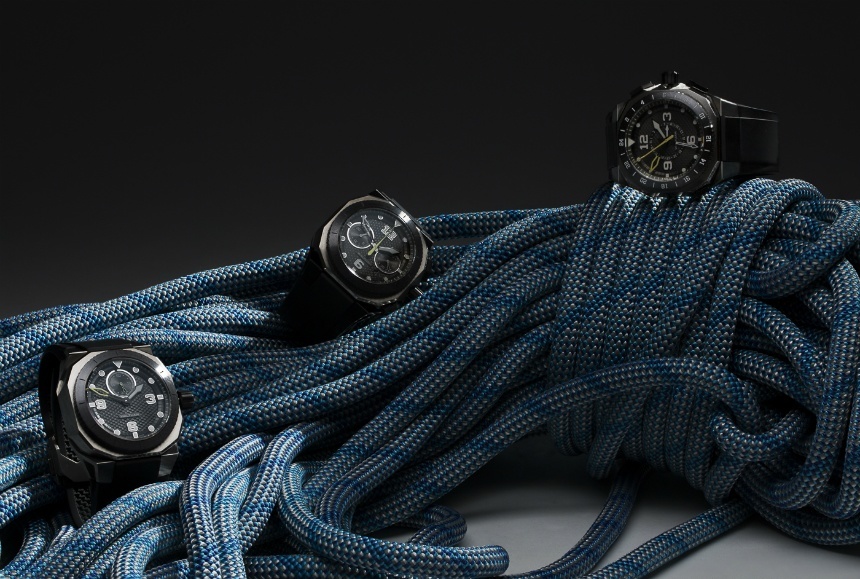 Of course, as many people pointed out, going mechanical meant it wouldn’t have an altimeter or barometric pressure gauge, two very useful tools for a mountain climber. But I knew we’d have these instruments with us anyway, and that on my wrist I just wanted a quick and easy way to tell the time. For me, the right questions were whether or not it would get in the way, if it would stand up to the daily activities, and if it would keep time in extreme cold.

When we arrived in Mendoza, our Argentinian expedition company confided to us that only three climbers had summited so far in the season. You see, what we hadn’t planned for was El Niño, or rather, as the New York Times put it recently, the “strongest El Niño in a generation.” On Aconcagua, this meant more snow than had been seen in 20 years. It also meant our group, which was supposed to consist of up to 19 people, had sixteen missing — presumably people who hadn’t ignored the warnings of El Niño.

Although the sun was blistering and conditions looked ideal from the bottom, the summit was wrapped in an icy haze, which our guide informed us was whipped from the ground by gale-force winds. We didn’t even see the peak for the first eight days, after which it finally poked out from its icy hat. As we went on, ticking off the days and moving progressively towards Camp 1, temperatures at night dropped sharply. By 8pm each evening, as soon as the harsh South American sun dropped behind the mountains, Luke and I would be sitting around in full summit gear, waiting for an acceptable hour to get into our four-season sleeping bags. 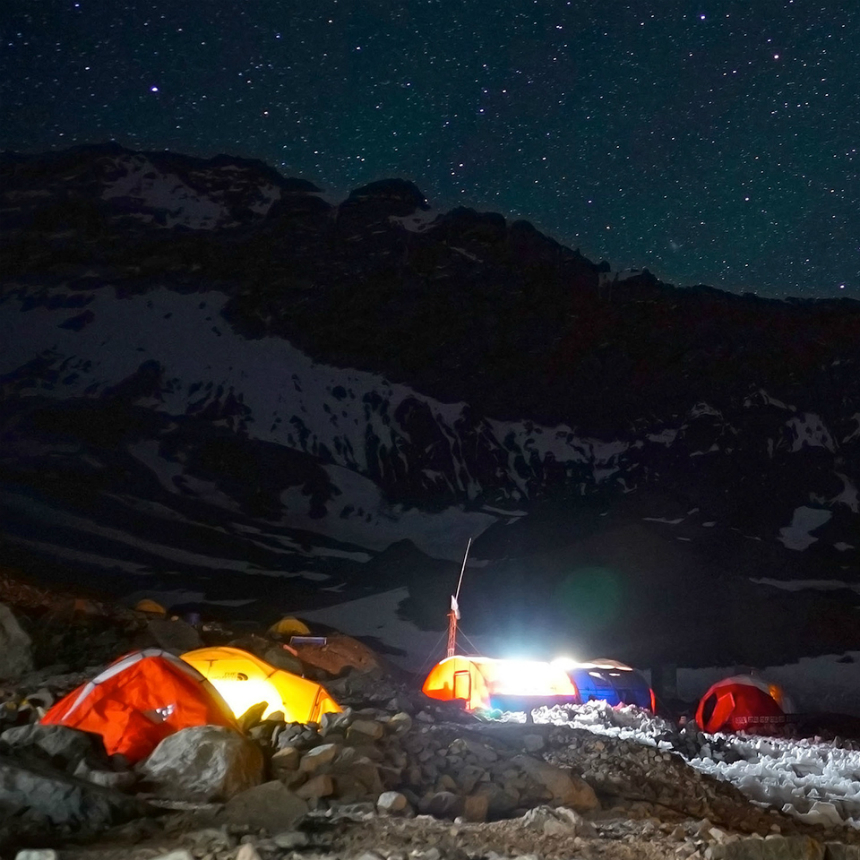 Night time in Base Camp, Plaza Argentina, the stars were breathtaking.

Each day on the mountain involved a number of tasks in which I’d end up bumping the watch, such as pulling on boots and crampons, putting up the tent, etc. So I was glad I had opted for something very sturdy. The Walthams are thick, titanium-cased watches with well-insulated movements. Fortunately, it didn’t scratch at all. 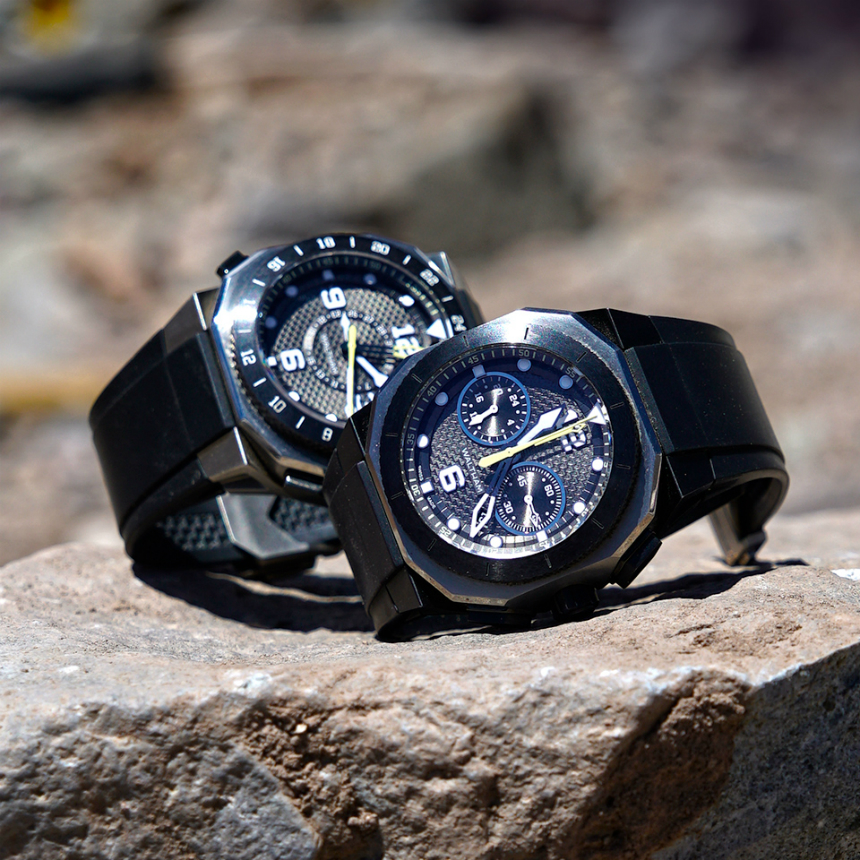 One of my favourite parts of watches was the strap. The Waltham watches have chunky rubber straps with easy-to-use clasps, which could be extended quickly and without fuss. The straps are wide, too, giving the feeling of really gripping the wrist. Each night, I took it off from outside my jackets, and put it on my wrist so I could use it in the tent. I admit this was a slight annoyance, having to readjust the size each morning and night. I’ll also admit the lume wasn’t as bright or long-lasting as it could have been, either. But I think this process was probably less fuss than untucking it from under a jacket sleeve every time I would want to check the time, especially with expedition mitts on. In fact, while climbing in the later stages, my colleagues would only be able to check the time when stopping, and would ask me for the time instead. This was often, as we had to stop every half-an-hour to remember to drink water – up there you have to drink over five litres daily, and take on food every couple of hours. 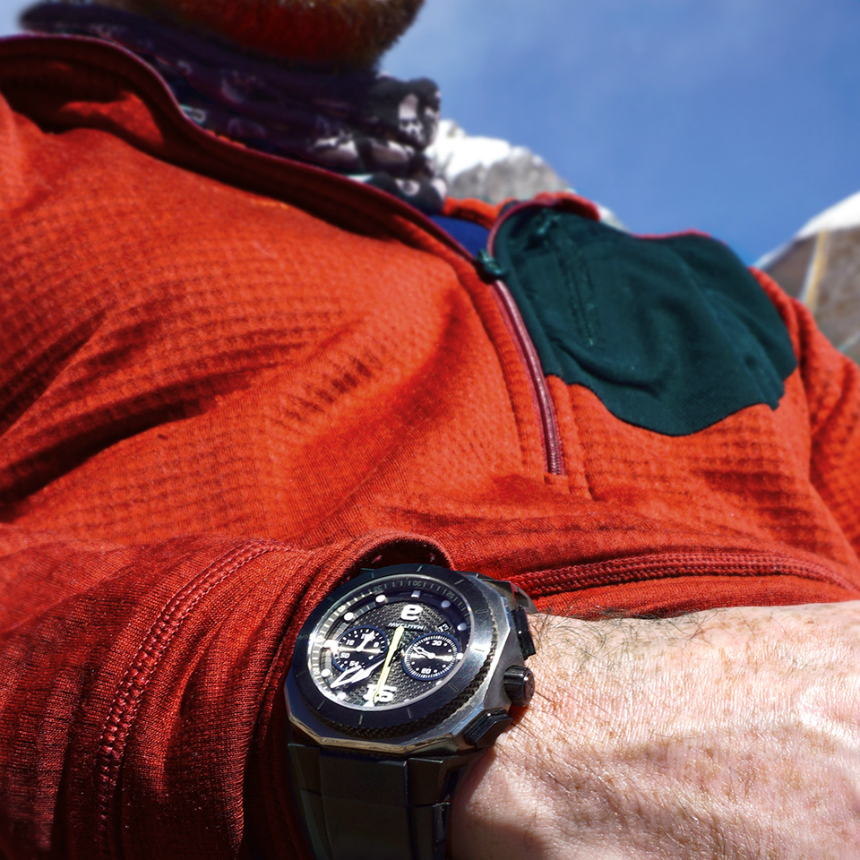 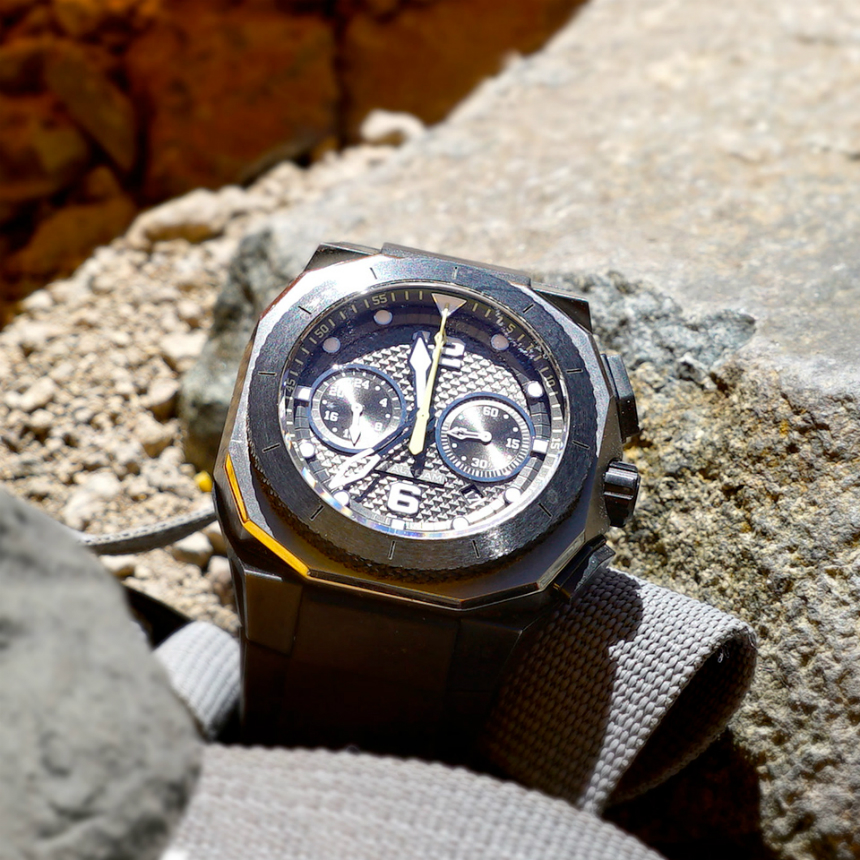 Our plan had been to summit on Christmas Day, we’d even taken along Christmas hats for the occasion – reindeer antlers, to be precise. But when climbing a mountain like Aconcagua, predicting the day you’re actually going to summit is stabbing in the dark. 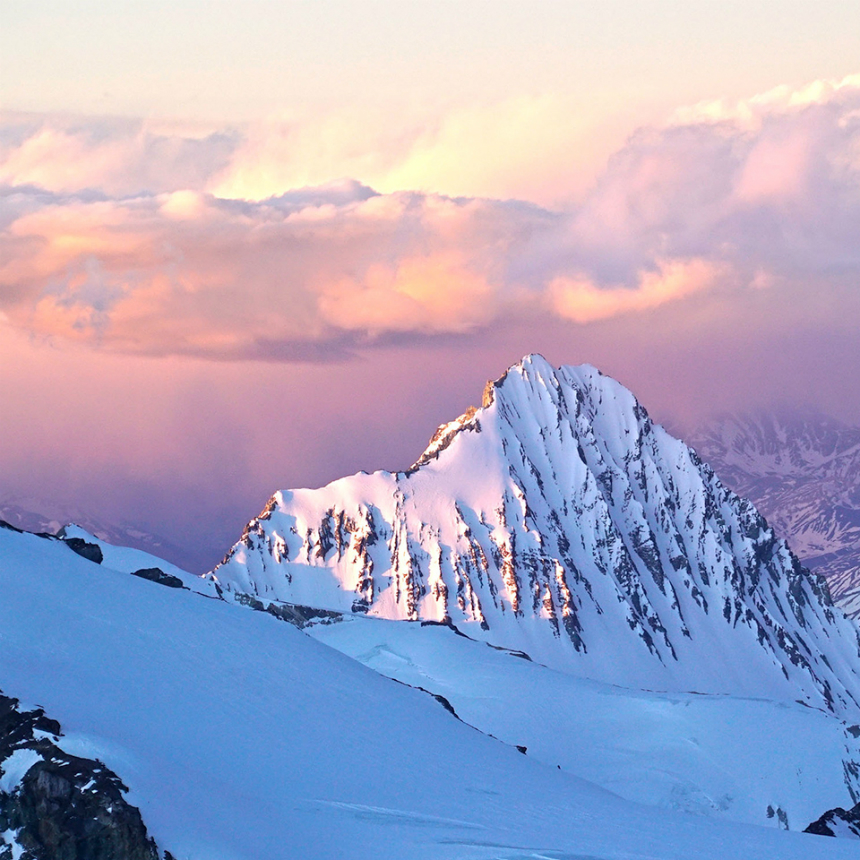 Incredible views as the sun set at Camp 2.

After sitting around at Base Camp listening to horrific weather reports, our guide told us it looked like a weather window approaching. The window, a day or two in which winds might let up enough for us to attempt a summit, was estimated for around five days from then. This meant we shortened our acclimatisation schedule, and the next day started for Camp 3. A journey we were originally going to do in six days was being shortened to just three.

The trek up to Camp 3, 6070m, or Camp Cholera, as it’s suitably known after the vomit-inducing stomach infection, was fairly pleasant. We arrived around 16:00 in the afternoon and everything seemed well, with a chance to summit early the following morning. There were a few concerns voiced over some clouds in the distance, but generally the word was positive and we went to our tents to shelter from the cold.