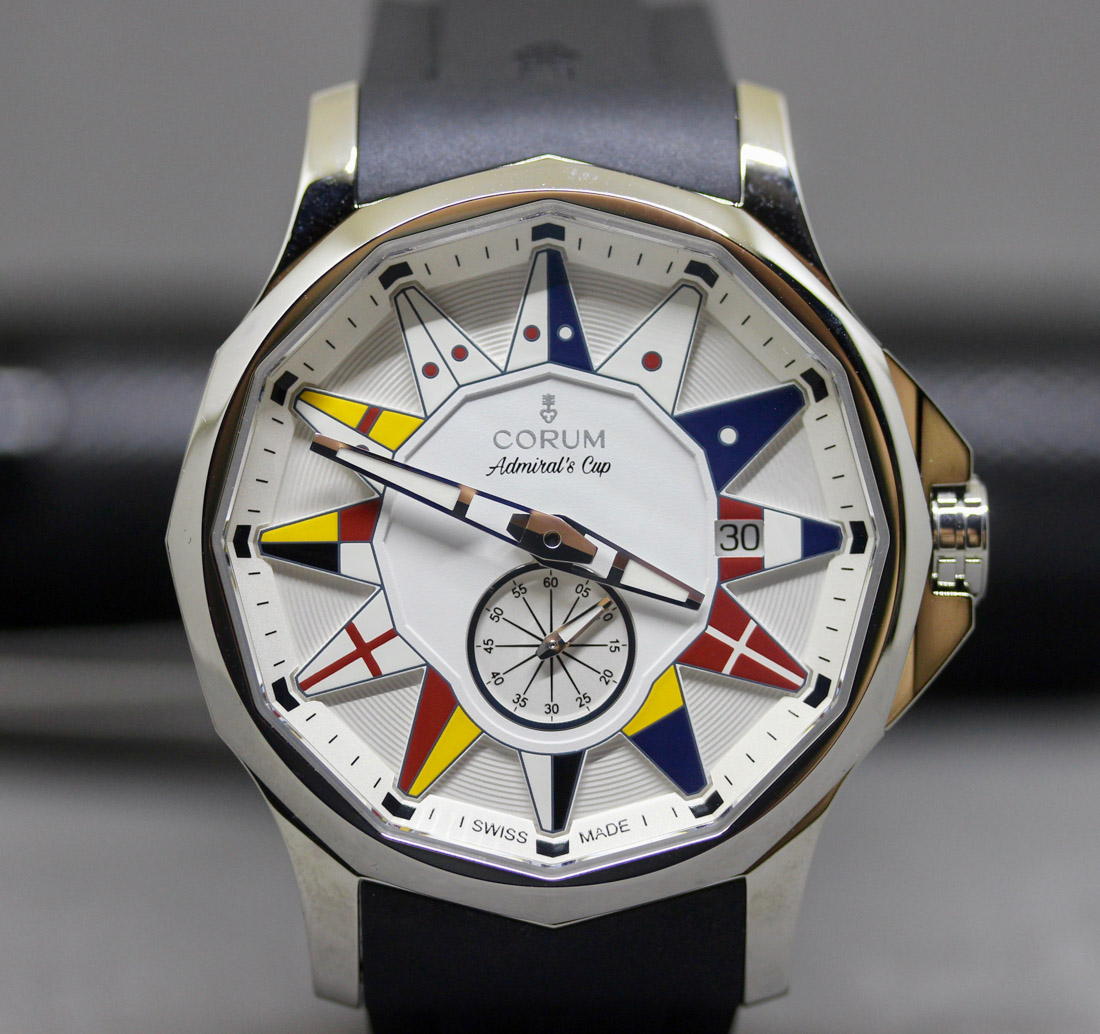 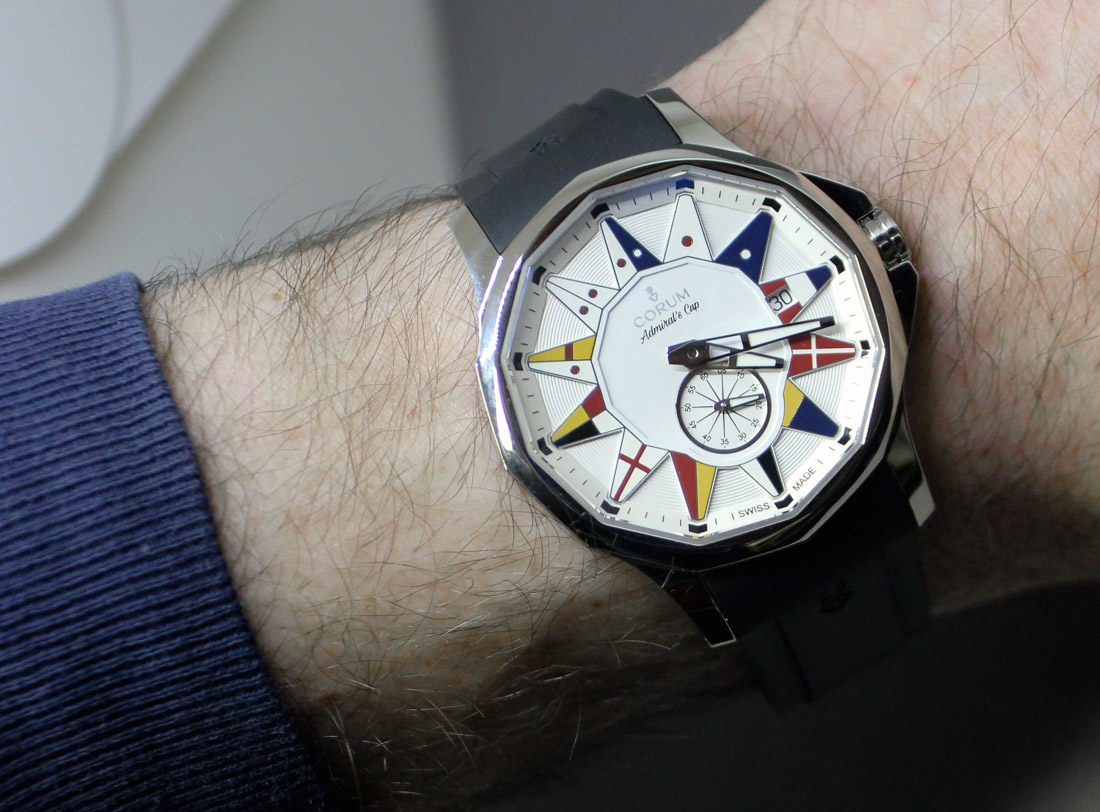 When it comes to Corum, most watch folks would probably call to mind the iconic Bubble line, or perhaps the Golden Bridge line. Those are certainly iconic in their own right, but they’re fairly “recent” additions to the catalog. If you want to go a bit further back, say, to the 1960s, then you’re talking about the Admiral collection. As you might expect, this line is particularly influenced by the water, ships, and sailing. While they come in a variety of sizes, and you have some options with complications, today, we’re keeping it simple with a look at the Corum Admiral Legend 42.

First, a quick note of clarification around the name. Throughout this article, we’ll be calling the watch the Corum Admiral Legend 42. Yet, a cursory glance at the dial shows that it’s called the Admiral’s Cup. So, what gives? In asking about it, it seems that the brand uses both names interchangeably, and they are the same watch. So, if you find the Admiral’s Cup, it’s not appreciably some different watch than the Corum Admiral Legend 42. Therefore, we’ve gone with the name that matches what you’ll find on Corum’s site. 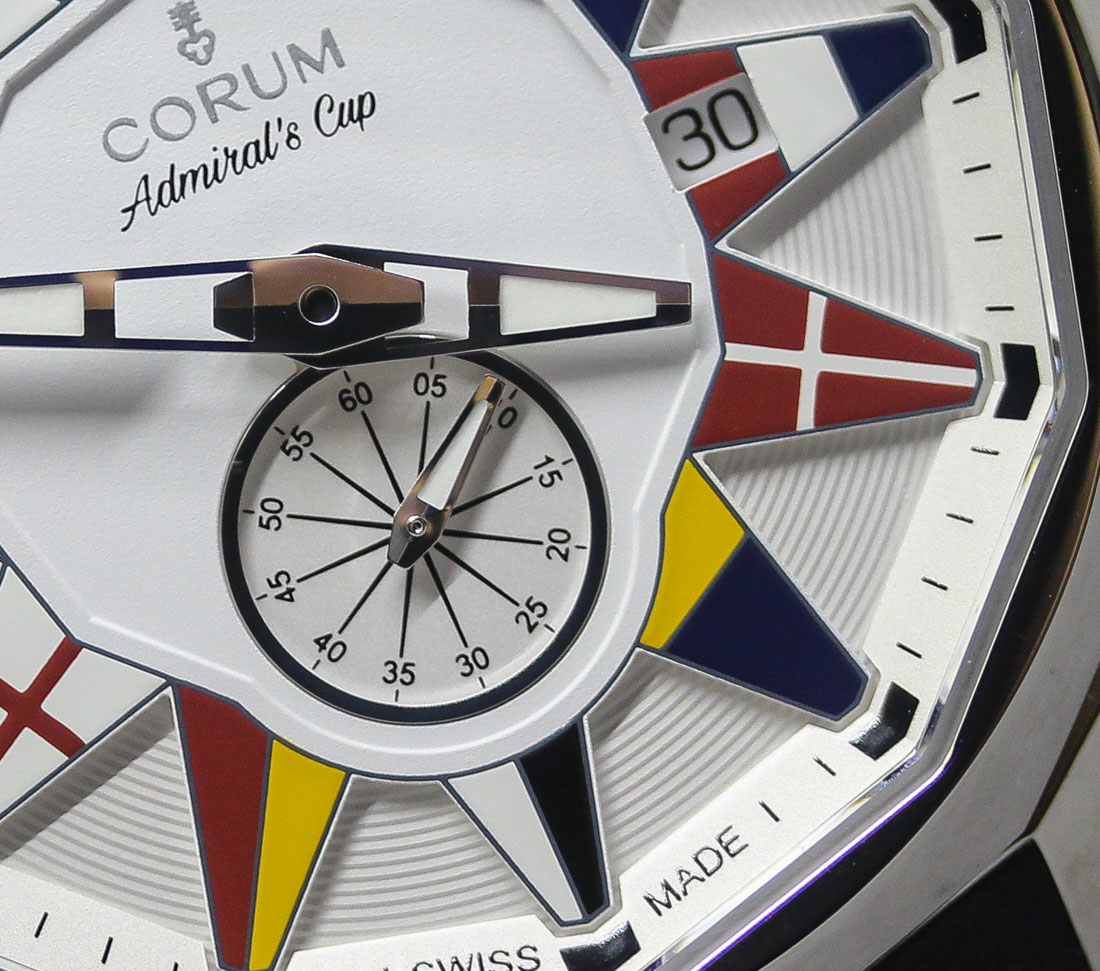 As you might suspect by the name of the watch, the Corum Admiral Legend 42 comes in (wait for it) a tidy 42mm diameter. Though, to see that you’d have to have one greatly calibrated eye – the case itself takes the form of a dodecagon (twelve sided). Apart from being a way to distinguish this watch, visually and immediately, from others, it lays the groundwork for the dial itself. You see, that dial, that is really where the Corum Admiral Legend 42 really shines (well, sure the case shines, but that’s because it’s polished). 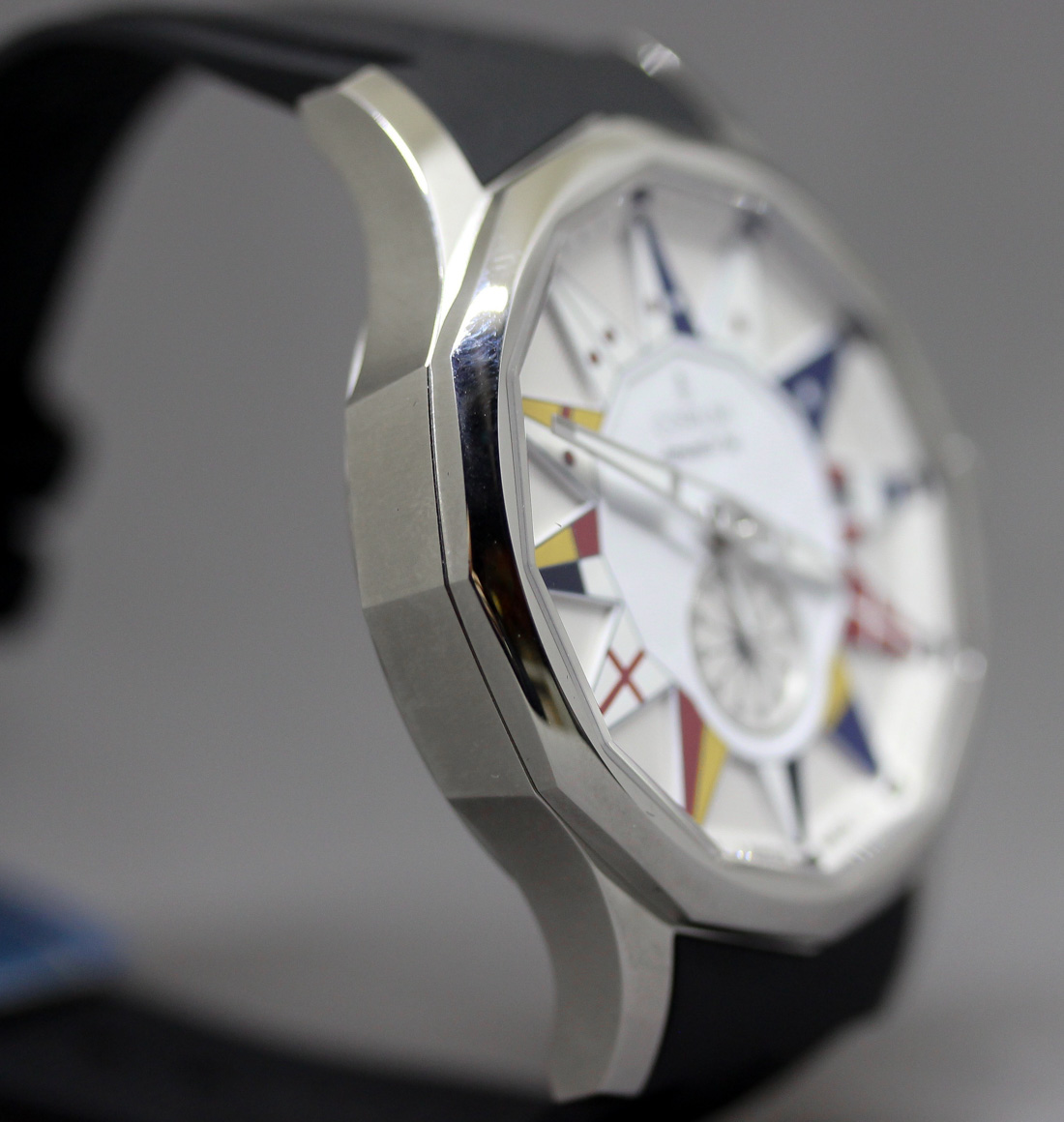 You see, with the dial the Corum Admiral Legend 42 brings the mizzenmast (that’s a yachting term, right?) to your wrist, in the form of signal flags that make up the indices. This is more than just a silly way to add some color and nautical flair to the watch. No, you see, those flags? They are actually conforming to the International Code of Signals (ICS) for indicating numbers using flags. This is pretty straightforward with the single digits, and then the double-digits just split the pennant in two to have the two digits indicated. While I may not be a boater myself, I like this, as it’s a clever way to integrate the theme, while giving people who really know their stuff something a bit more “hidden in plain sight” to grab on to. 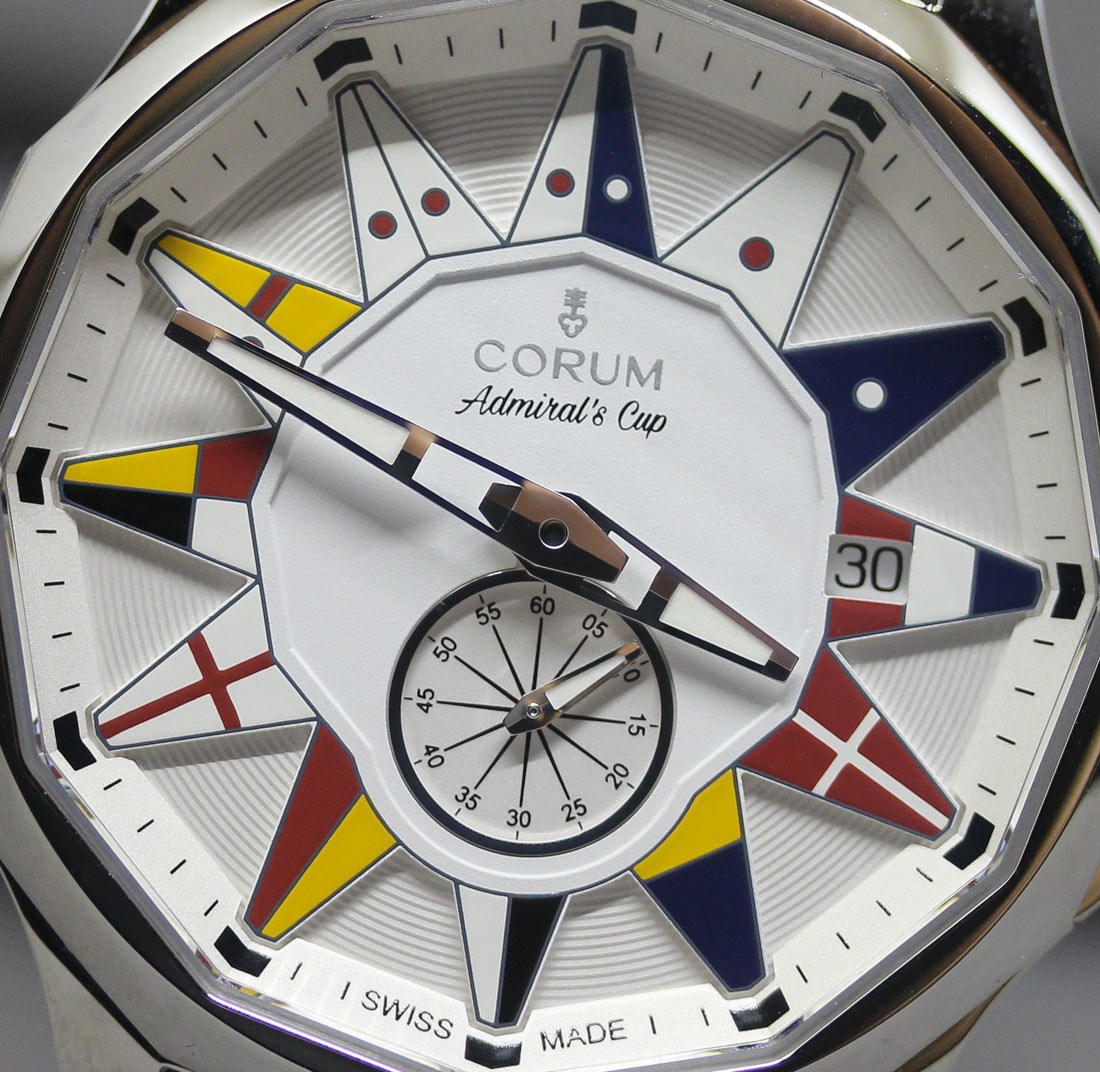 Looking at the dial, something was putting my eye at unease, and I couldn’t place why, at least at first. Then I realized (quickly, thankfully) that not only was the center section (think of it as the wire the flags hang off of) not circular, it’s not even symmetrical (thanks to the date window). One presumes that this was done solely for the sub-seconds (which is more prominent here than on most watches). It also makes one pause to think about an enterprising customizer going with a Fiona Krüger-esque sugar skull there in the center. But I guess that’s more biker and car culture than it is for the marina set. 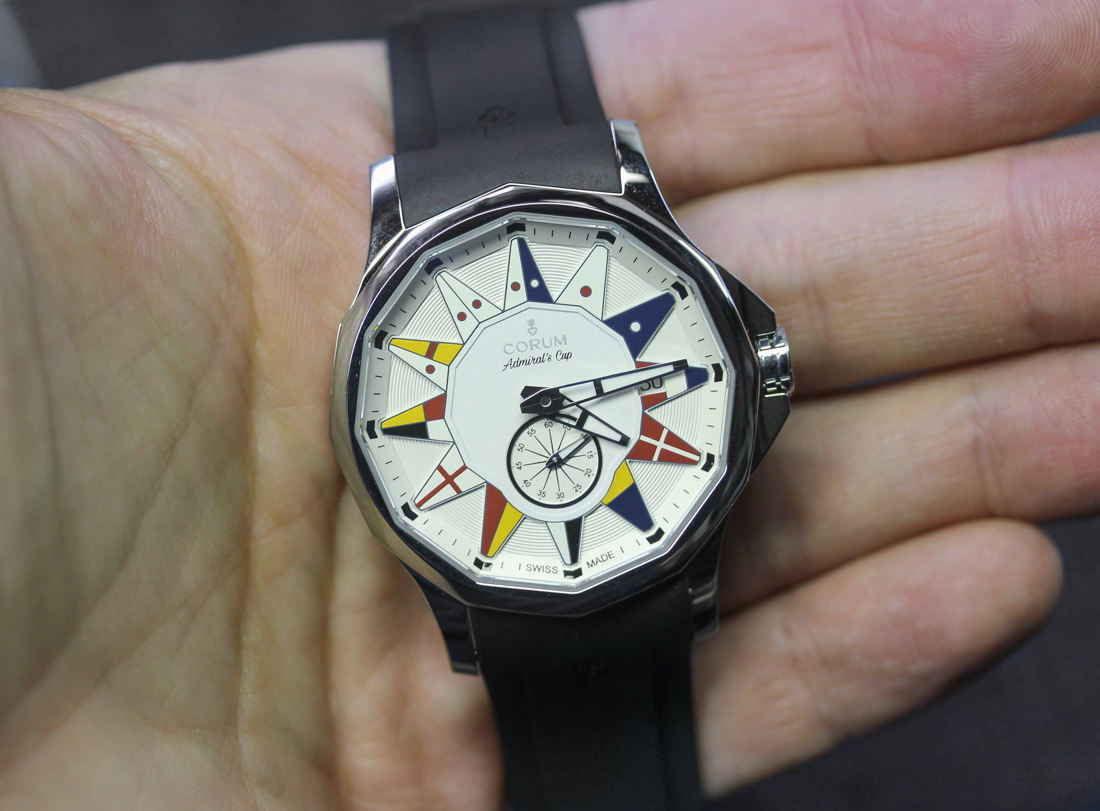 But I digress. While the number of patterns and colors on the dial of the Corum Admiral Legend 42 could make for a particularly busy watch, it works. Realistically, aside from the white (which is what the dial is, primarily), you’ve only got four other colors – red, blue, yellow, and black. These are all in small doses, and allow the other aspects – the angles, the circular grooves, and the like, to shine through. There is a lot going on with the dial, but it never felt too busy, or presented a problem with telling the time (hey, even the hands are flags – sort of). 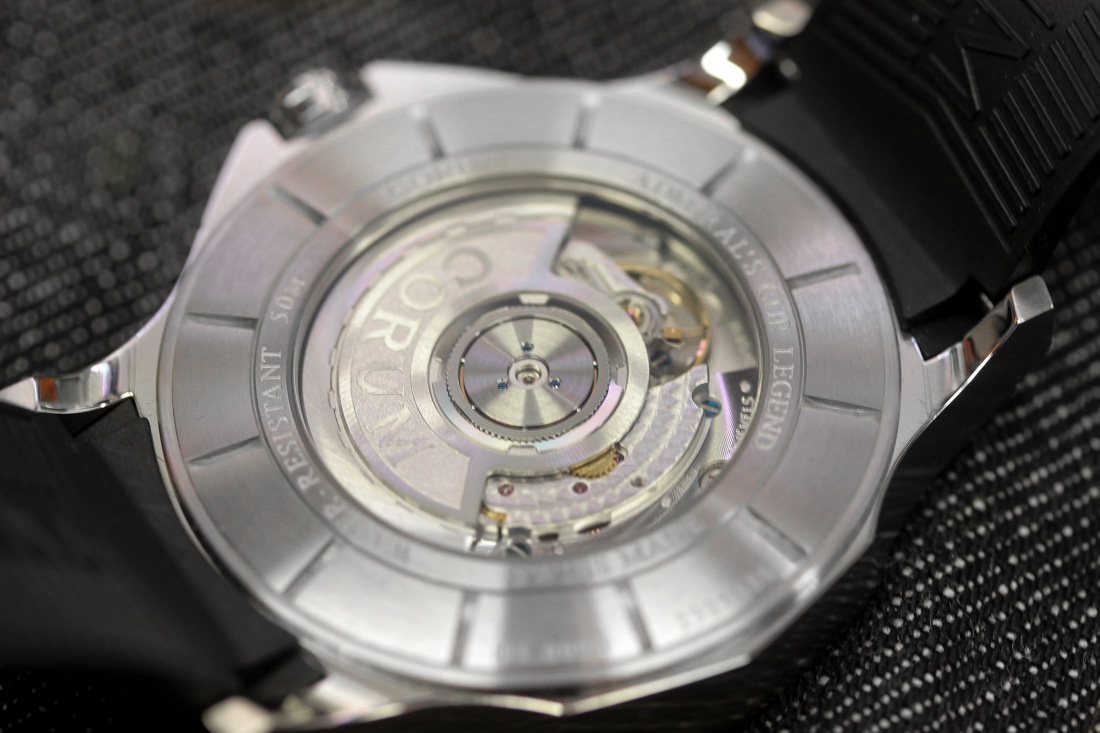 For a dial as legible and interesting as the one on the Corum Admiral Legend 42, it’s not going to be worth a barnacle if it isn’t accurate. I wasn’t about to put the the watch on a Timegrapher (left it in my other pants), but I had no issues with being on time throughout my day. The watch is driven by what Corum calls the CO395 movement, which starts off with a base ETA 2895, and puts some additional decoration and a custom rotor into the mix. Given the solid ETA base, one would presume that reliability, accuracy, and maintainability shouldn’t be a problem. 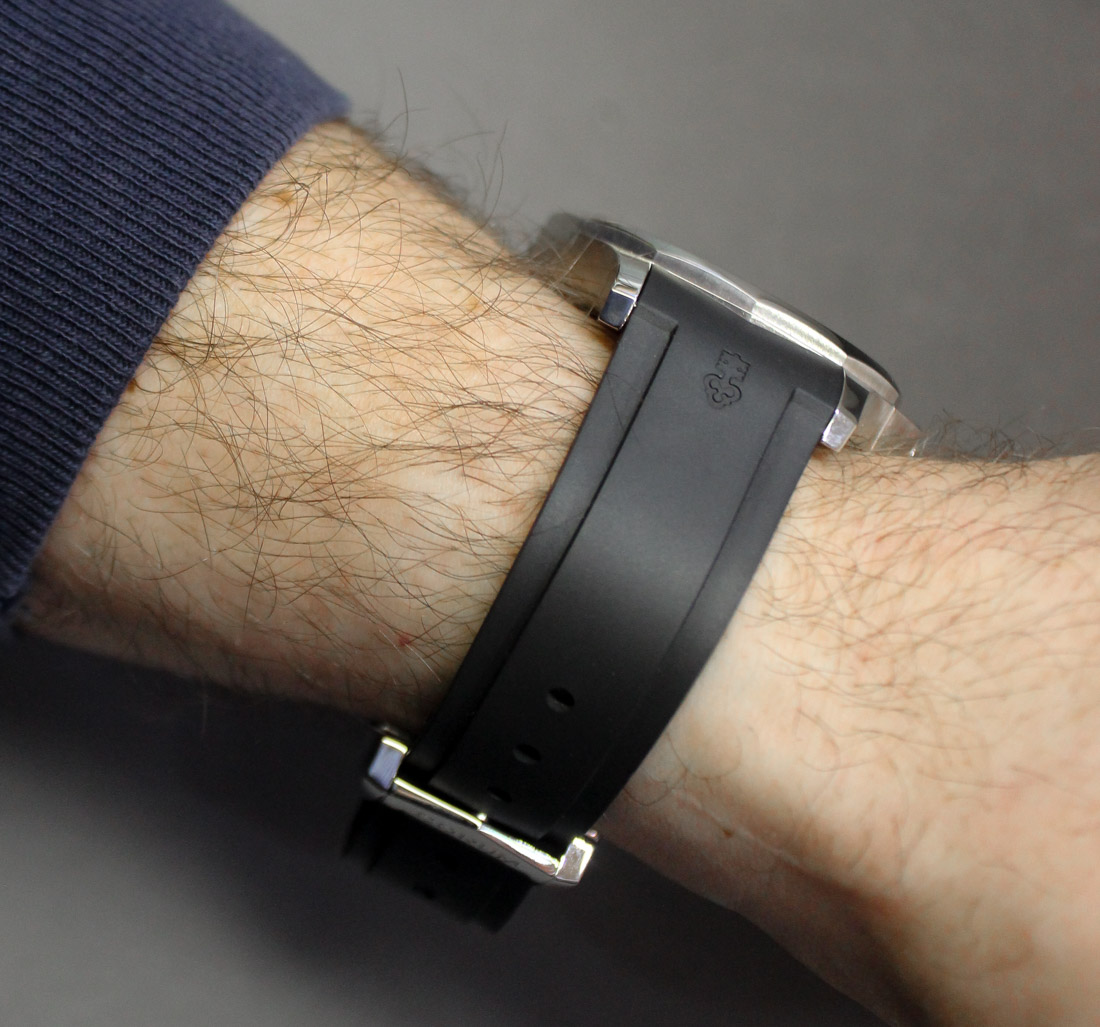 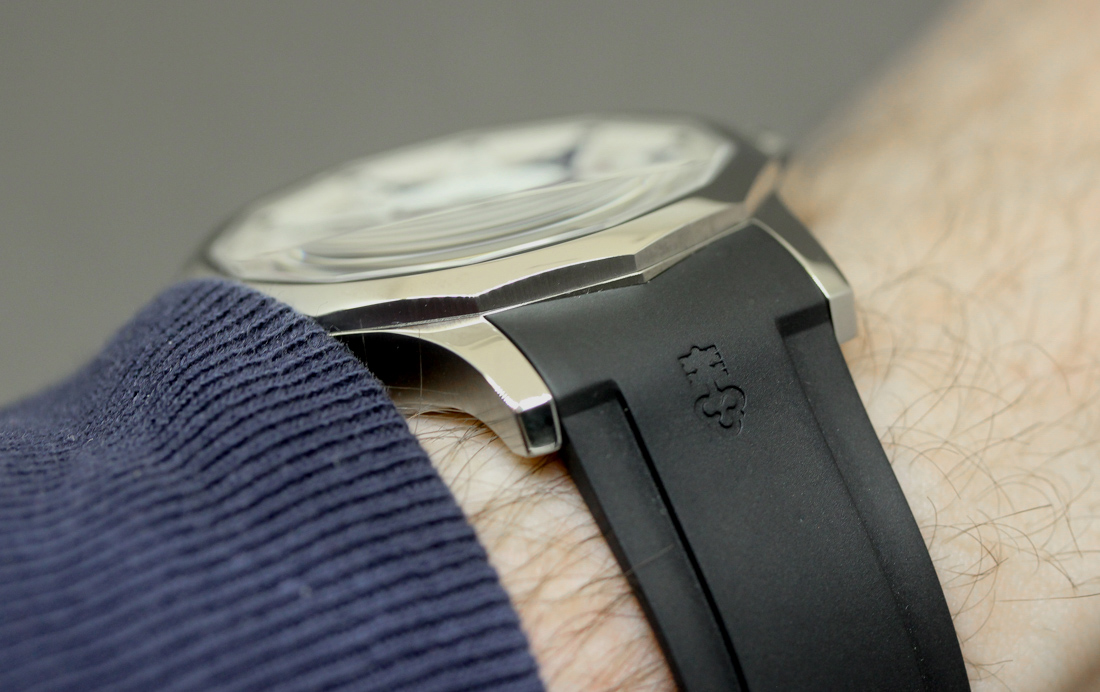 Fittingly, for a watch as water-themed as the Corum Admiral Legend 42 (and yet still managing to not be a dive watch), it comes on a rubber strap with folding clasp. With the rubber, you get a strap that’s snugging right into those angles on the case, which makes for a tight look. It also means, if you like swapping out watch straps, you’re going to be stuck with just the stock option, or possibly getting a NATO to work. Anything else, and that case gap will ruin you. 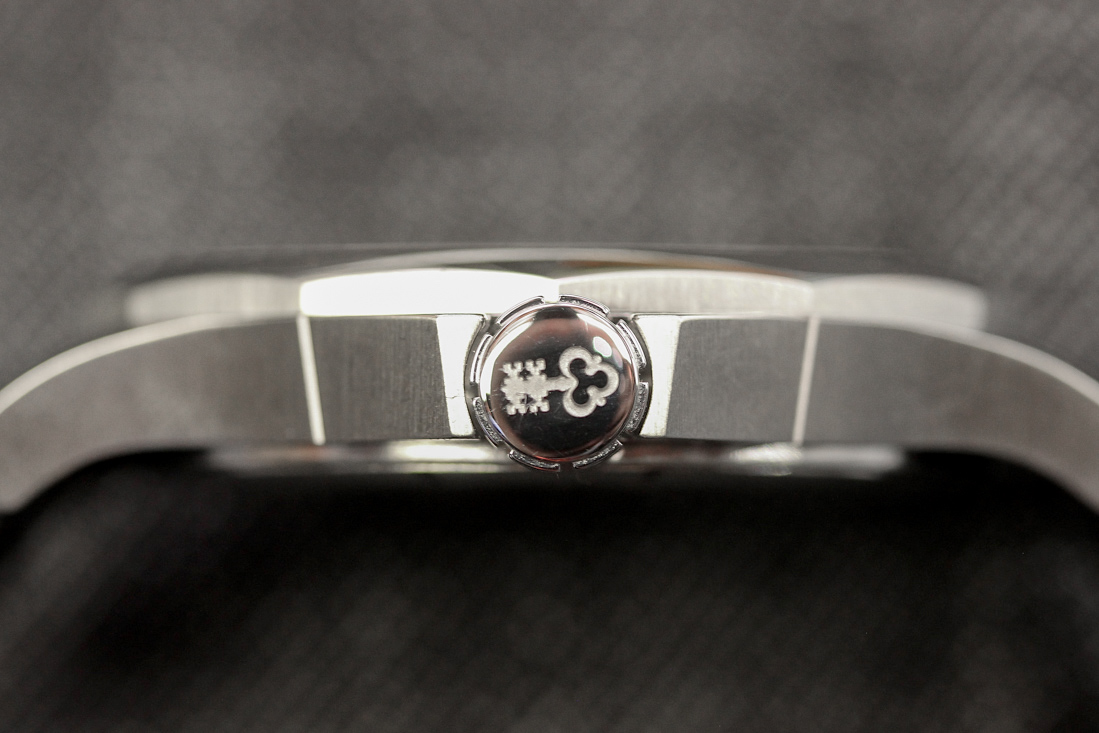 On the flip side of that water-based coin, it’s surprising that the Corum Admiral Legend 42 only carries a 50m water resistance rating. Now, I’m not expecting some depth-crushing 500m rating, or something like that. I would just hope that a watch, that would seem to be most at home on the deck of a boat, would carry at least a 100m rating, so as to better keep things safe should you take a dive into the blue. 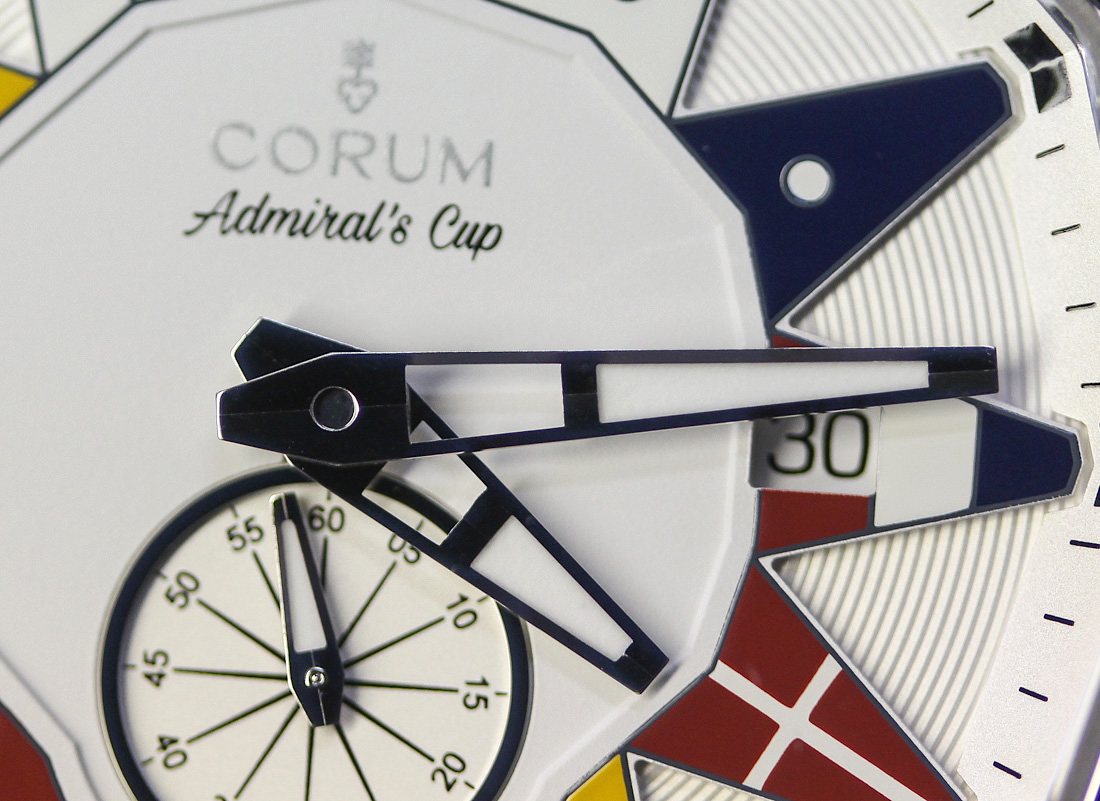 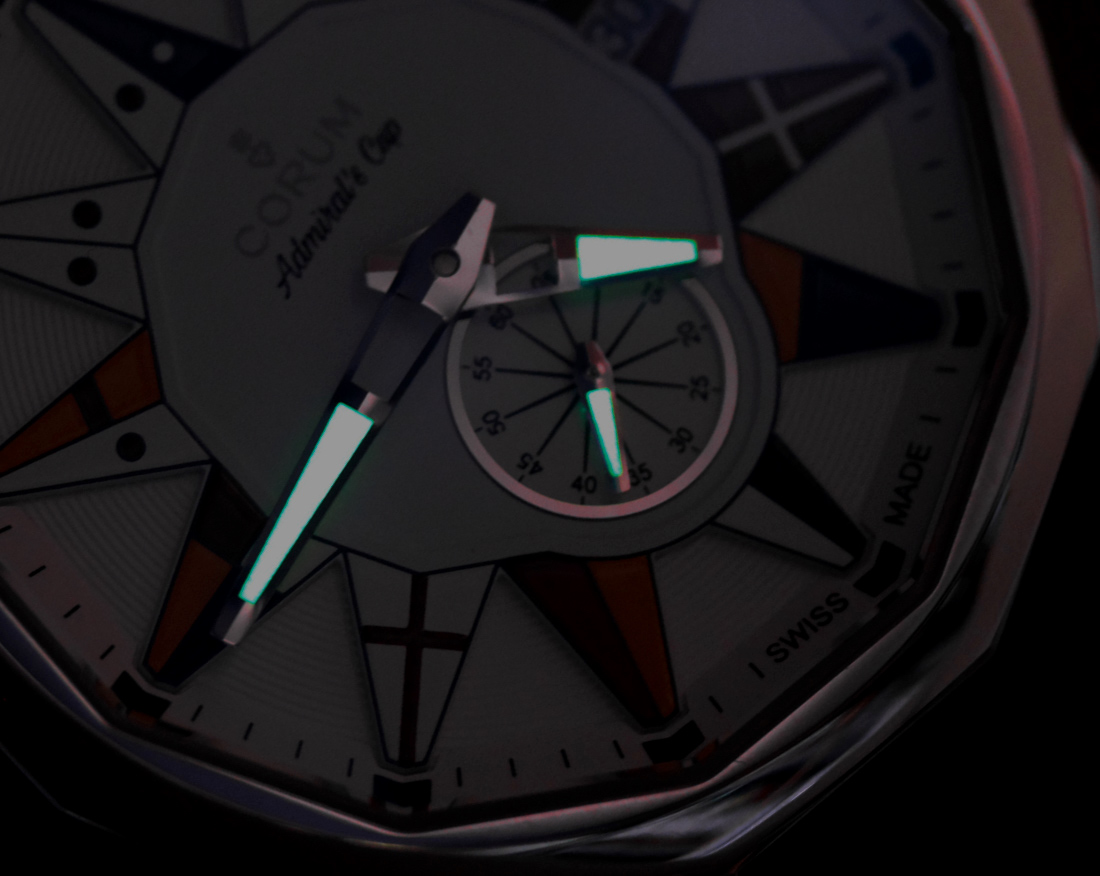 Then again, perhaps the Corum Admiral Legend 42 is aimed more at those who captain a desk, like myself, and want to be reminded more of the water’s call. In that case, yeah, the watch works great. In an office environment (or, say, out to a nice dinner) the mostly-white dial paired with the high polish of the case makes for a nice, dressy piece. Find yourself in a funkier setting? Well, the random (to the untrained eye) patterns at the indices liven things up. And yeah, even though I griped about the water resistance rating, it certainly is enough to cover you in your day to day (just don’t get crazy in the water with it). 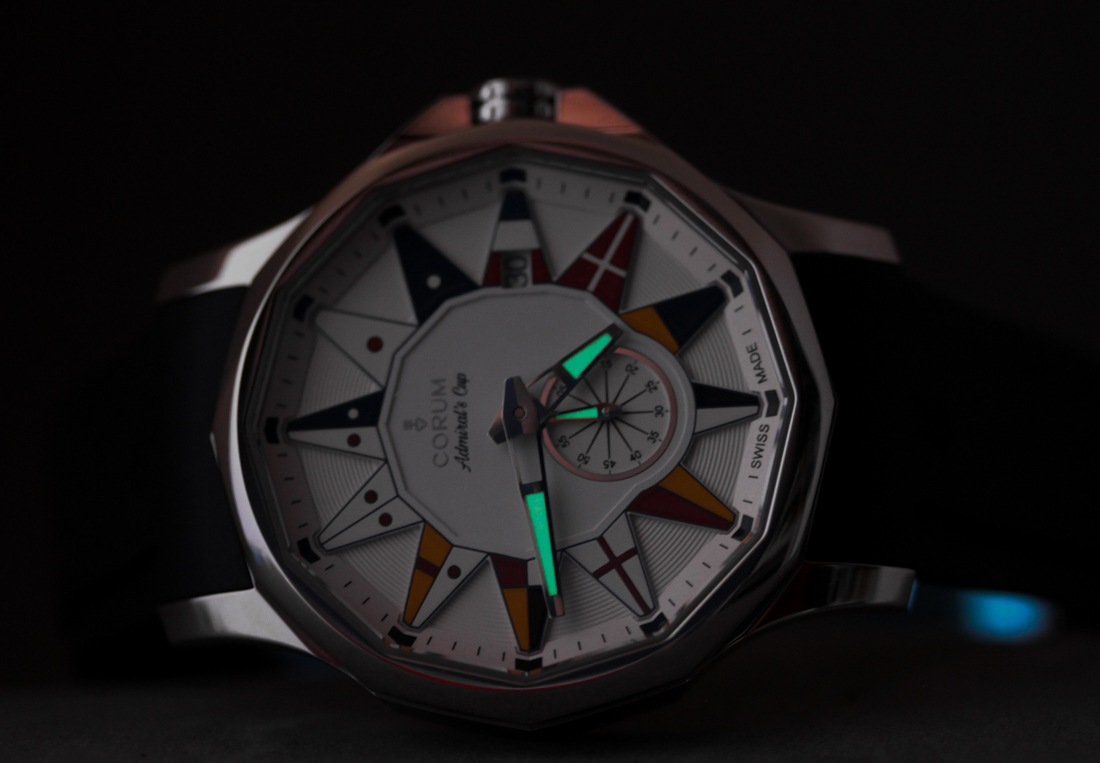 As I mentioned in the outset, the Corum Admiral Legend 42 was my first experience with the brand, and I’m glad I went in a different direction than what might be more commonly expected. Sure, the boating theme is not something I would particularly seek out myself, but I appreciated the ICS flags being used, and found them to be visually intriguing as well. Should you want to bring your own Corum Admiral Legend 42 along on your next trip to the marina, head on over to your AD with $3,600, and this shall be yours. Just beware – you’re going to have a hard time choosing between the navy blue and white dials! corum-watches.com

Necessary Data
>Brand: Corum
>Model: Admiral Legend 42
>Price: $3,600
>Would reviewer personally wear it: Sure. I’m not a boater, but there’s plenty for us landlubbers to appreciate.
>Friend we’d recommend it to first: It’s for that dude who spends every waking moment of his weekends at the water’s edge.
>Worst characteristic of watch: Probably the measly 50m water resistance rating.
>Best characteristic of watch: Just how clever using the ICS flags is in the design.