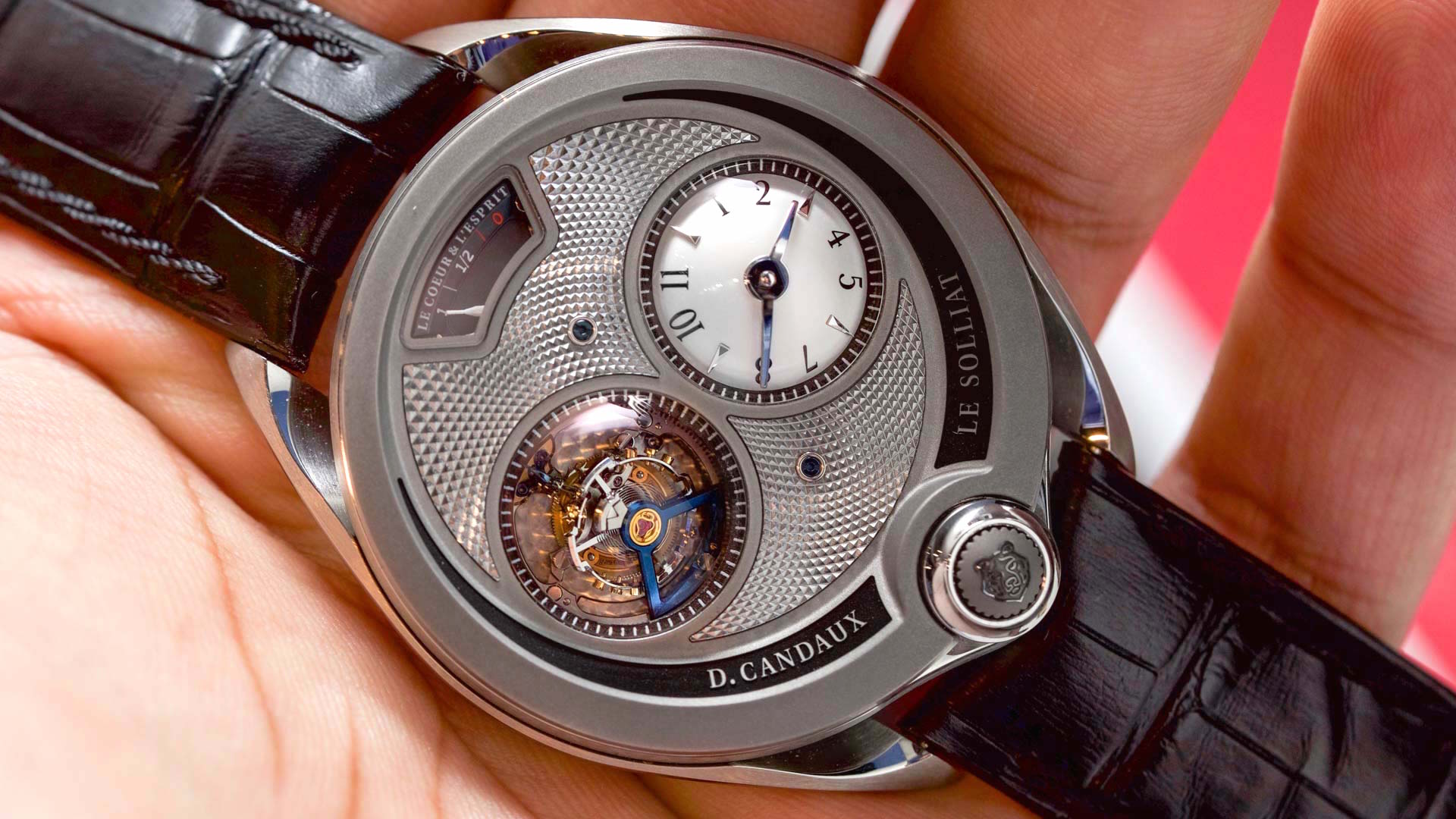 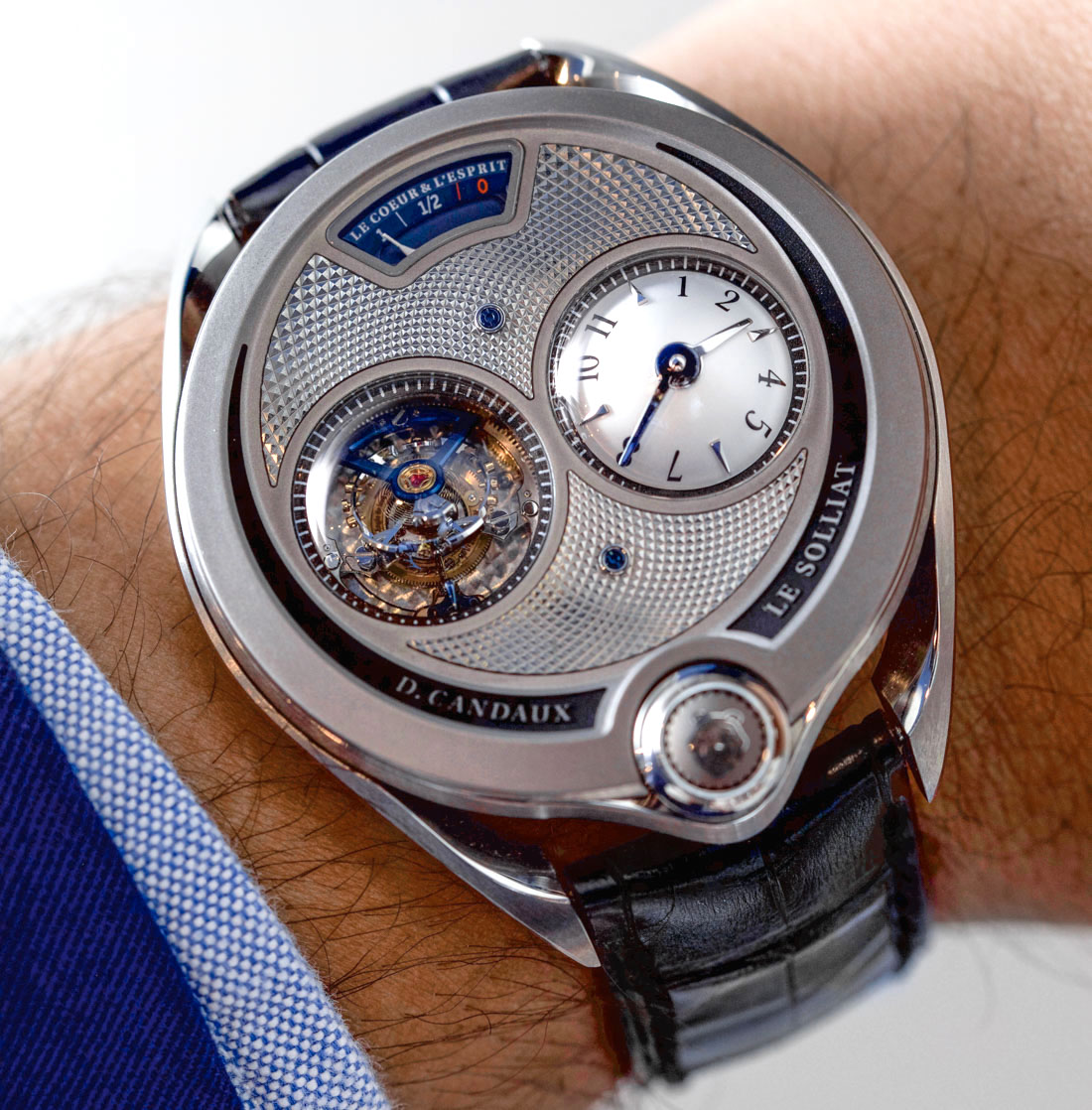 Those who have been paying close attention to the independent haute horology scene may recognize the name of designer David Candaux from the credits to some spectacular and truly out-there watches. Looking at the D. Candaux 1740 Half Hunter Tourbillon watch, those same watch nerds will not be surprised at the avant-garde, over-engineered watches Mr. Candaux has finally put his own name on. This Half Hunter model introduces a variation of the 1740 collection that is the young D. Candaux brand’s first and still only model. For many readers, however, Mr. Candaux and his brand could probably use an introduction. 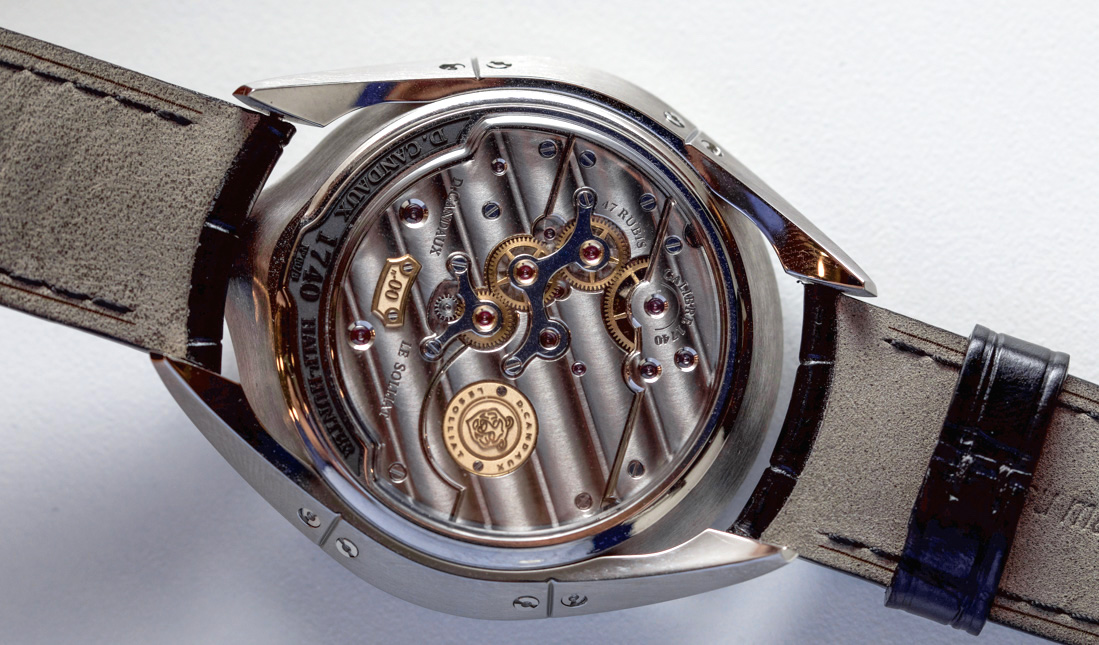 You can get an idea of where David Candaux is coming from by looking at his past utterly weird and impressive projects such as designing the movement (hands-on here) of the MB&F HM6 Space Pirate watch. He also produced the Fonderie 47 Inversion Principle Tourbillon and more recently was involved with the Montandon Windward TMA01 V1 watch. All incorporate tourbillons, you will notice, and are generally extremely technical. Mr. Candaux apprenticed at Jaeger-LeCoultre and is a third-generation watchmaker from the Swiss Vallée de Joux, apparently tracing his watchmaking roots in the region to around 1740. The brand launched, I believe, only in 2017. 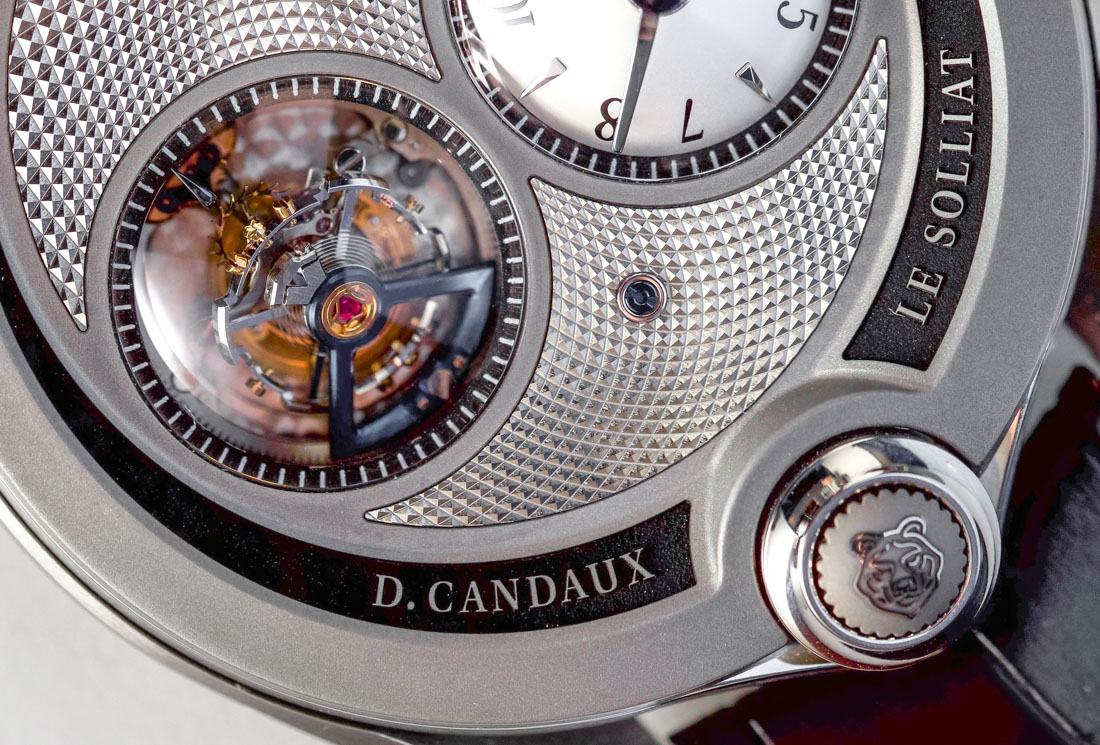 Partially framing the D. Candaux 1740 Half Hunter watch’s “face,” let’s call it, is a black-coated crescent-like shape with lettering in relief. Opposite the brand name, “Le Solliat” is the small Swiss town where the Candaux atelier is, and the brand’s materials make much of its Vallée de Joux location and the area’s watchmaking heritage. The apparently proprietary pattern of the guilloche you see on the front of the D. Candaux 1740 Half Hunter has been named “Pointe du Risoux” because it is meant to reflect the shapes of Risoux fir trees of the area as seen from above. The movement also features the brand’s own “Côtes du Solliat” striping, visible through the caseback, and many features and finishing techniques have borrowed from particular local watchmaking traditions. 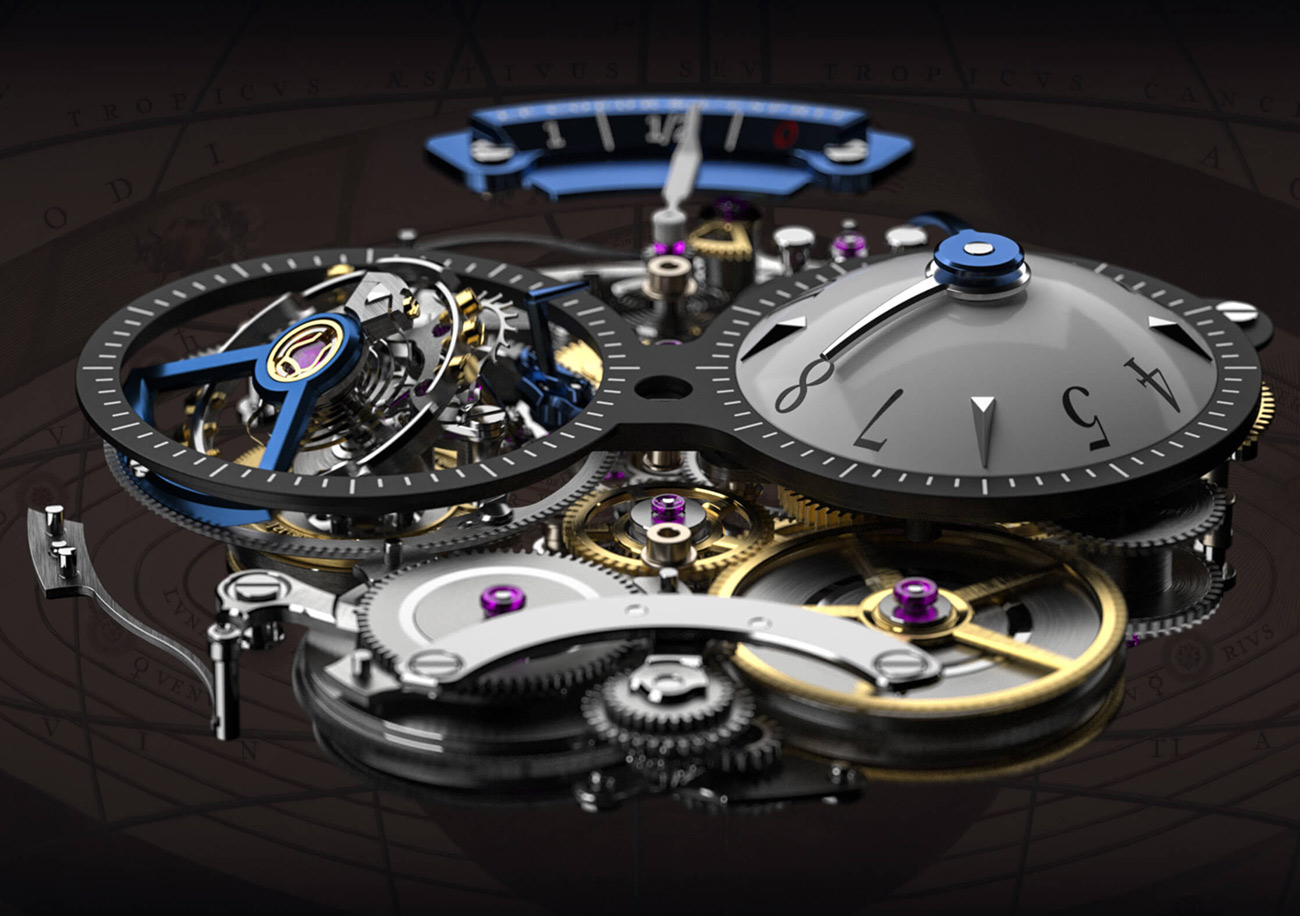 Like the watches mentioned above that David Candaux worked on, a lot of unexpected details make the D. Candaux 1740 Half Hunter Tourbillon interesting beyond its more obviously unconventional appearance. What probably visually stands out first, however, are the evenly sized and symmetrically situated dial and tourbillon staring back at you like an alien gas mask. Previous versions have placed the entire face of the watch under a sapphire crystal, but for the D. Candaux 1740 Half Hunter, each is under its own sapphire dome. The rest of the watch’s face is then in white gold with a guilloche pattern, as if part of the case. And this is where the Half Hunter part of the name comes in. 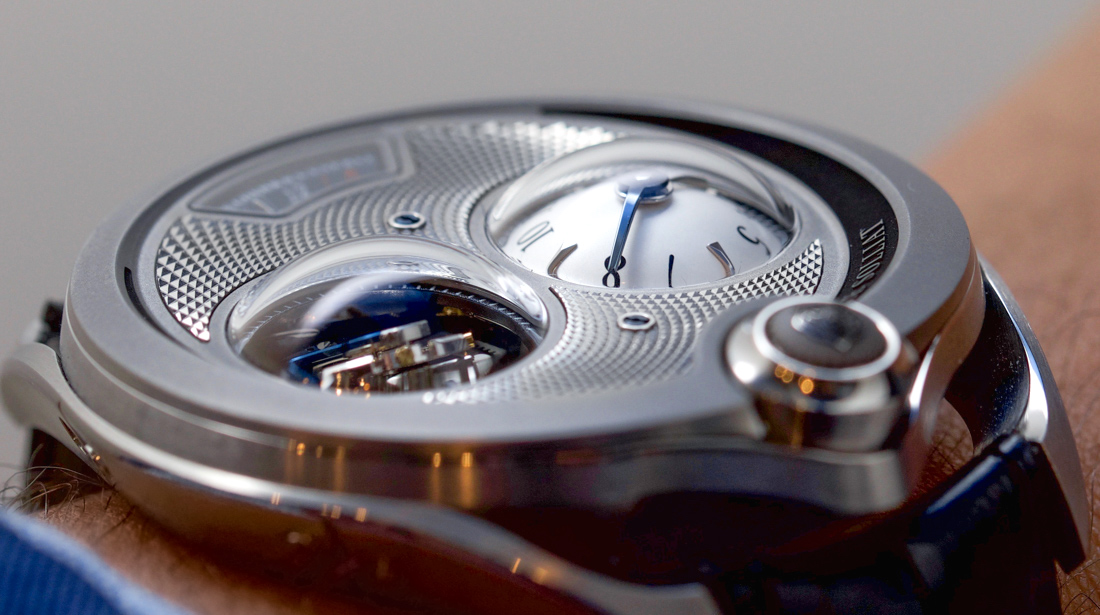 As many readers know, a hunter style watch has a hinged lid that covers the watch’s face to protect it, but that needs to be lifted in order to read the time (an example is the Panerai Luminor 1950 Sealand 3 Days Automatic Acciaio “Year Of The Monkey” watch here). You’ll sometimes also see this term applied to hinged caseback covers. A half hunter watch means that there is still a steel cover over the dial, but an opening allows one to see the hands and read the time. The cover itself will often feature indices. For the D. Candaux 1740 Half Hunter, the watch’s guilloche-decorated front with its “portholes” for the dial and tourbillon represents the idea of a half hunter case – it does not, in fact, open. 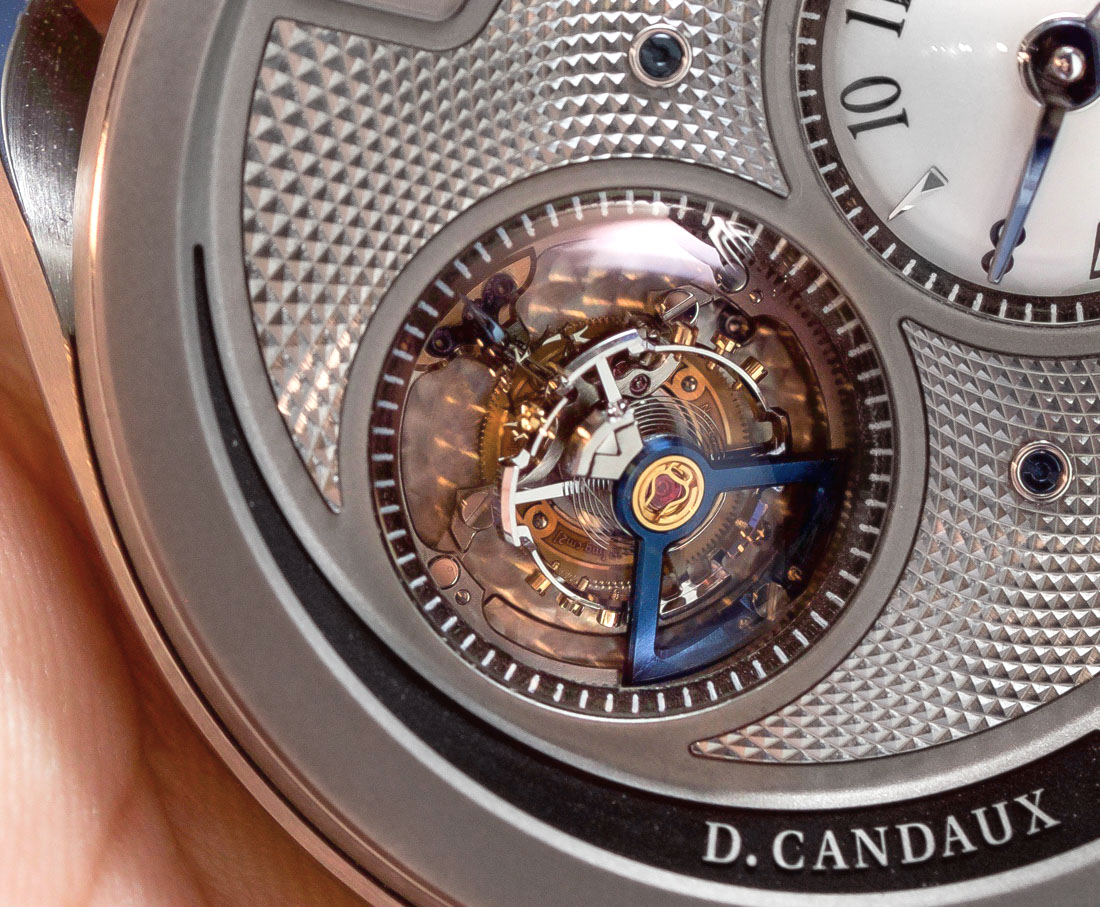 The dial for the D. Candaux 1740 Half Hunter’s hours and minutes is also highly domed, echoing the bubble-like crystals, and with the shape of the hands following its curvature. Personally, I tend to like the three-dimensional effect of domes and orbs on watches. Previous D. Candaux 1740 watches have all had flatter dials, and there are other small differences such as changes to the hands, tourbillon, materials, and the addition of a logo to the crown. But the guilloche face along with the raised crystals and dial are the major elements distinguishing the D. Candaux 1740 Half Hunter from previous versions. 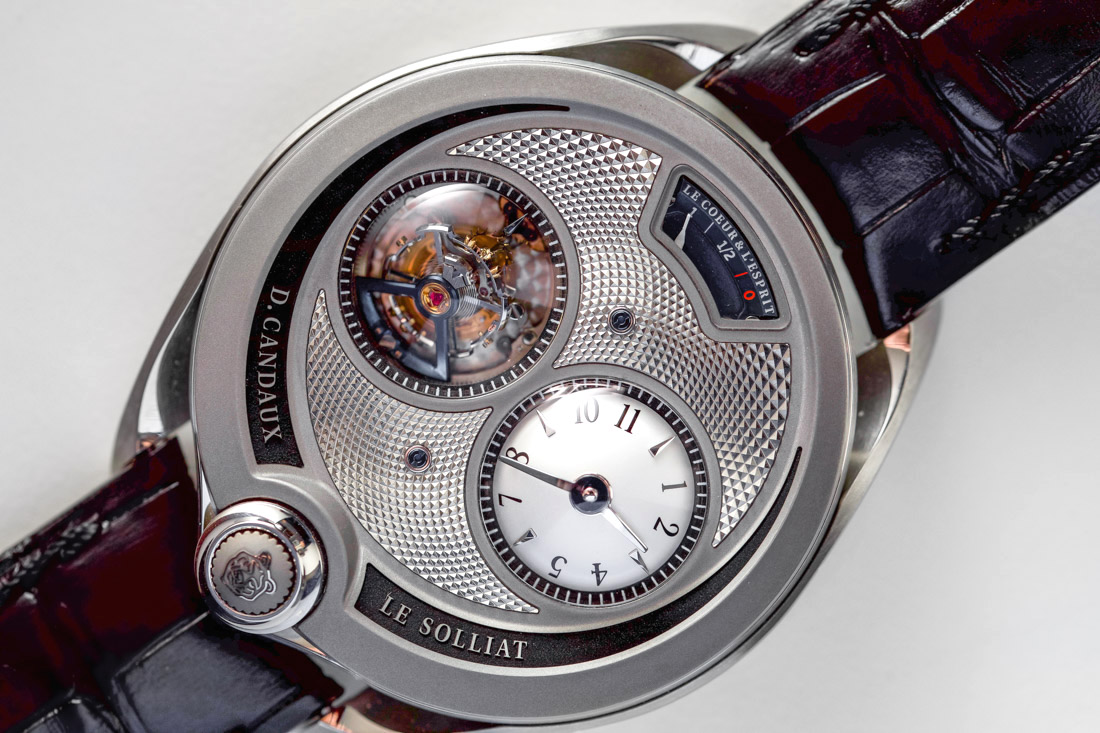 Aside from the dial for the hours and minutes, there is a power reserve indicator at the 12 o’clock position of the face, also in its own little sapphire window. The 60-second tourbillon indicates the seconds with a blued titanium hand (the tourbillon cage is blued and untreated titanium). Less immediately noticeable is the slight incline of the face that sits higher towards its 12 o’clock edge and dips further below the bezel at 6 o’clock. This subtle angle makes viewing the time (subtly) easier, we are told, but it also just helps the watch feel more unique, three-dimensional, and architected. 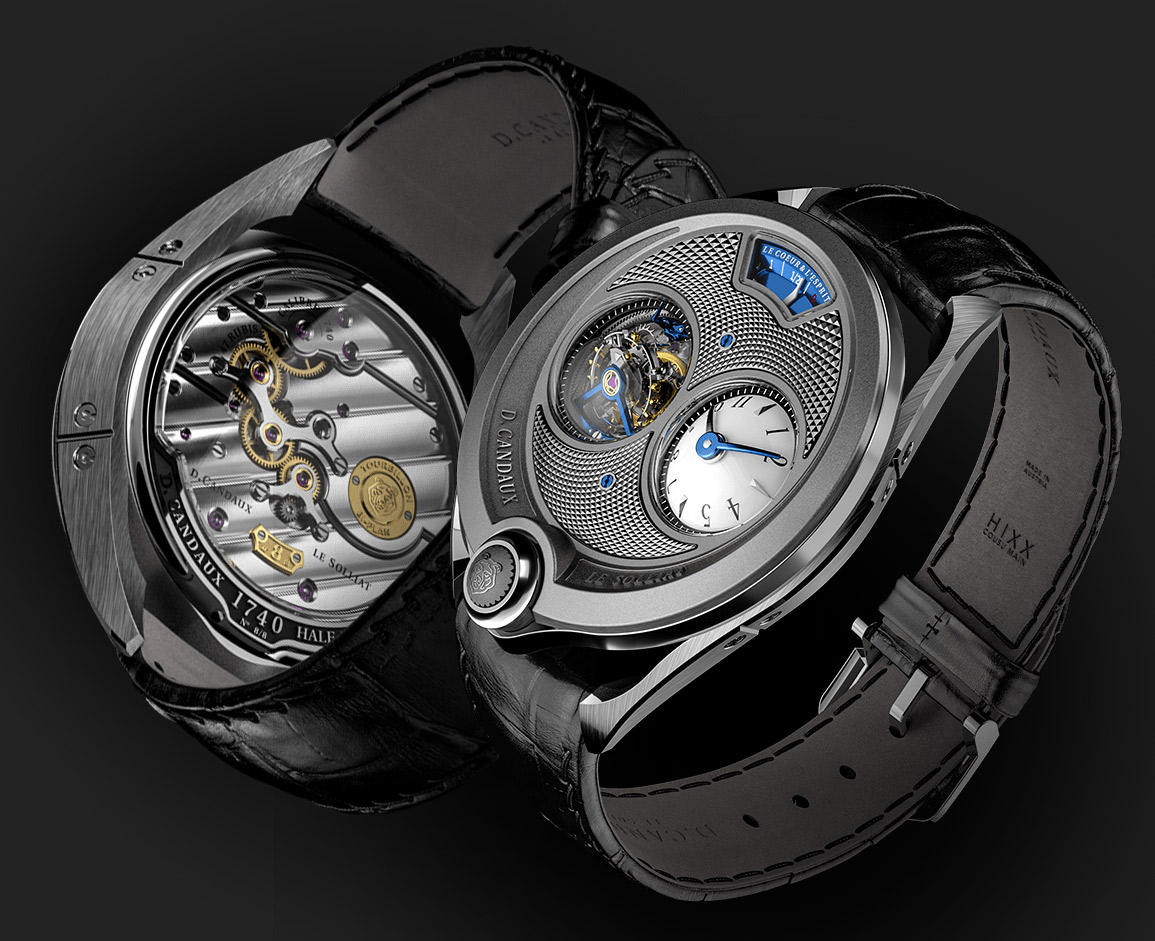 By now, you have surely noticed the vertically oriented crown at 6 o’clock that lends the otherwise round case a slight teardrop shape. It looks like a button at first and, in fact, one presses it like a button to unlock it, whereupon it extends so you can wind the movement and set the time. In its depressed position, D. Candaux calls it “secret,” but I find that it is a pretty conspicuous part of the design. The crown alone requires 31 separate parts. 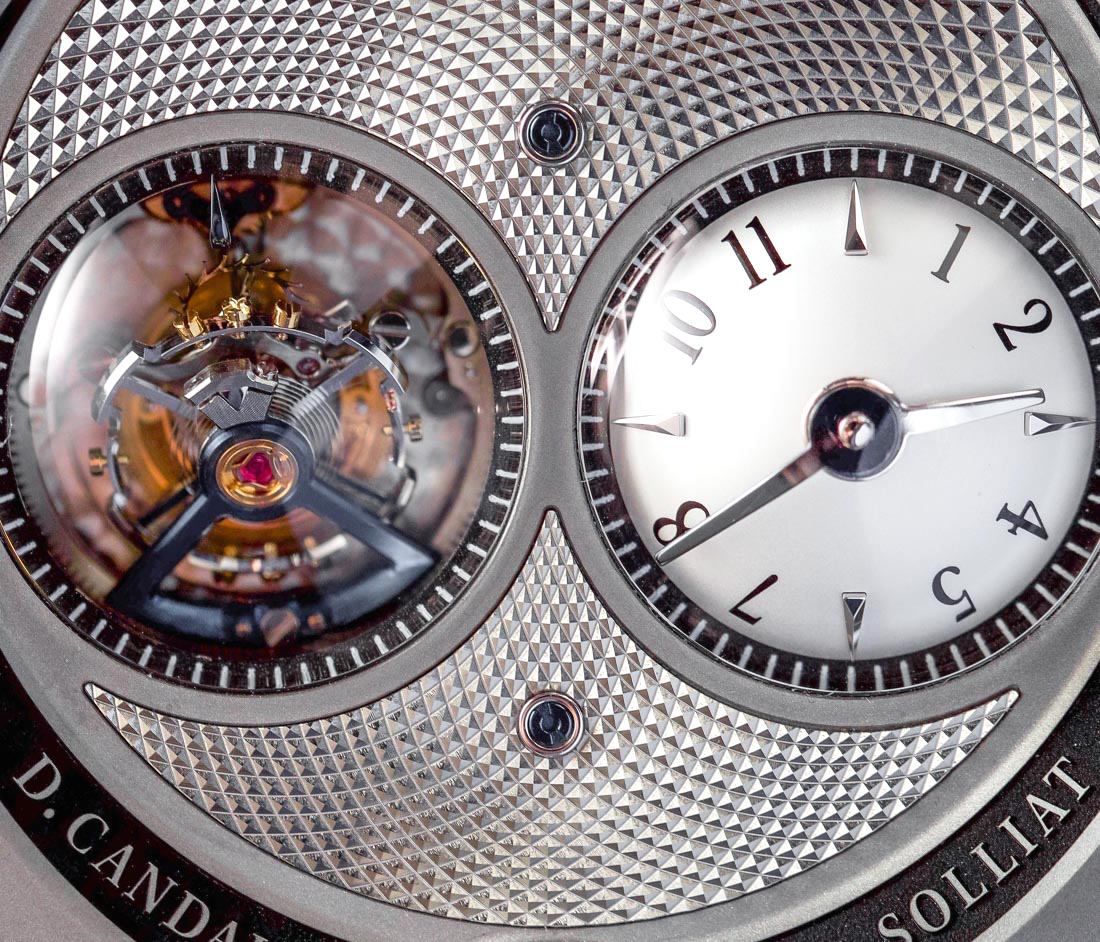 Interestingly, the brand says that this crown design (with two patents) necessitated a lot of unusual technical features and solutions. The reasoning is not explained fully, but the entire gear train and bridges apparently needed to be positioned at a 3° angle in relation to the horizontal mainplate. It might be hard to see in the pictures, but these angled parts are supposed to create a “cascading” visual effect that will be more pronounced as it plays with light, accentuating the finishing. 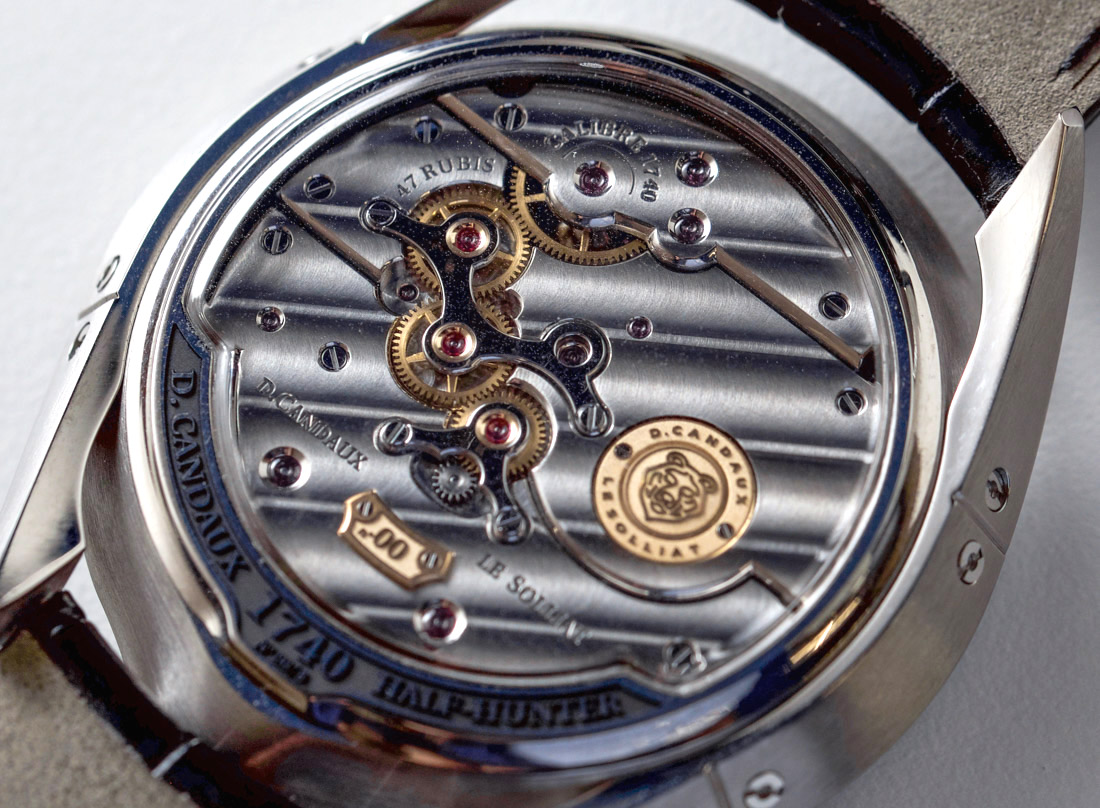 The 1740 Calibre is totally in-house designed and handmade, we are told, and each part individually hand-finished. No wonder he only makes eight watches at a time. The movement is primarily made of titanium and operates at 3Hz with a power reserve of 55 hours via two barrels. The tourbillon is of the flying variety, meaning it is supported from beneath. Its cage is inclined at 3° like other movement parts and the balance is inclined a further at 30° in relation to the cage, thus David Candaux calls this a “bi-plan” tourbillon. 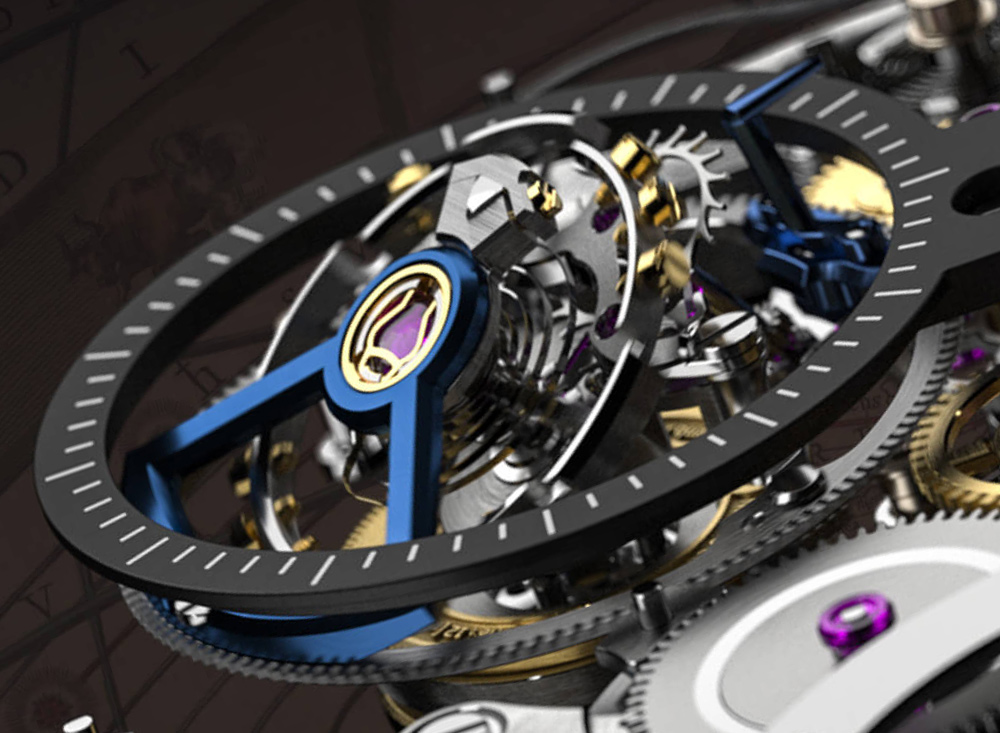 The escapement is also designed by Candaux using techniques traditional to the Vallée de Joux, and uses a variable inertia balance, Breguet overcoil spring, and Philips terminal curve. It’s getting geeky now. One cool feature is that movement specifications that will be necessary for any future repairs by other watchmakers are “micro-engraved” by hand on the titanium baseplate’s flank – in relief, no less – a process which itself requires 150 hours of work alone. 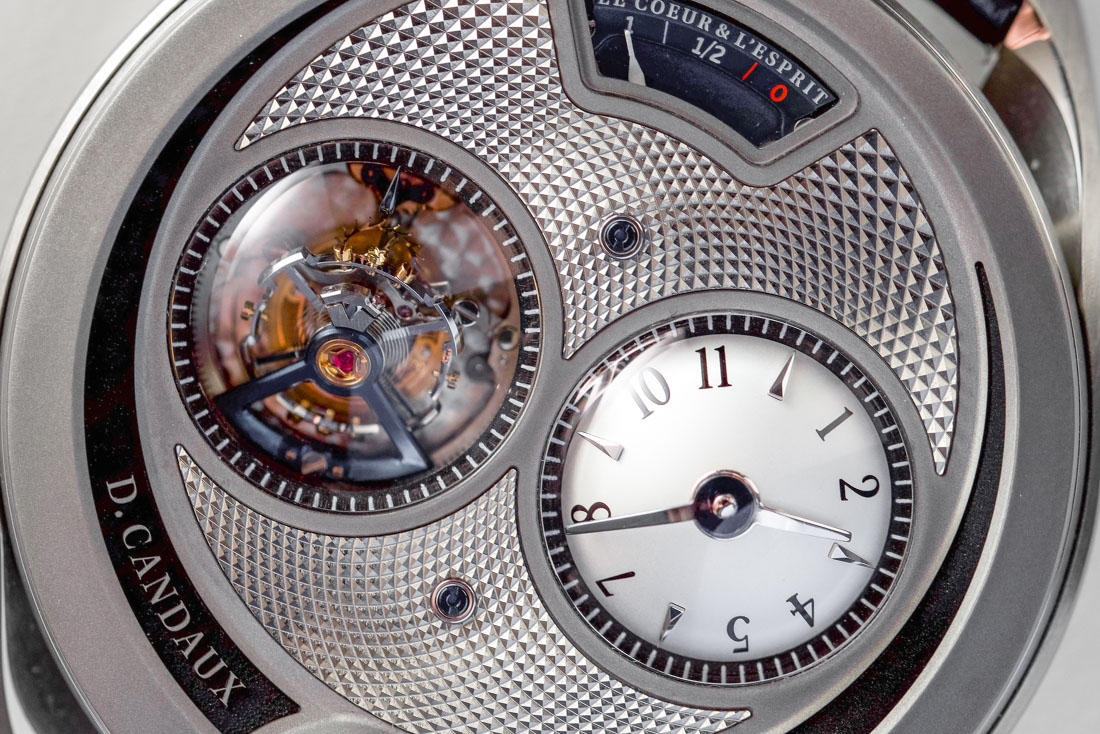 The D. Candaux 1740 Half Hunter Tourbillon case is 43mm wide and 12.6mm thick, water-resistant to 30m – and it is pretty light on the wrist, both the case and movement being mostly in Grade-5 titanium with various finishes. A range of other materials is used, but in small amounts, such as gold screws and chatons, steel for the hands, etc. The guilloche is in “high palladium content” 18K white gold and done by hand on a rose engine lathe. 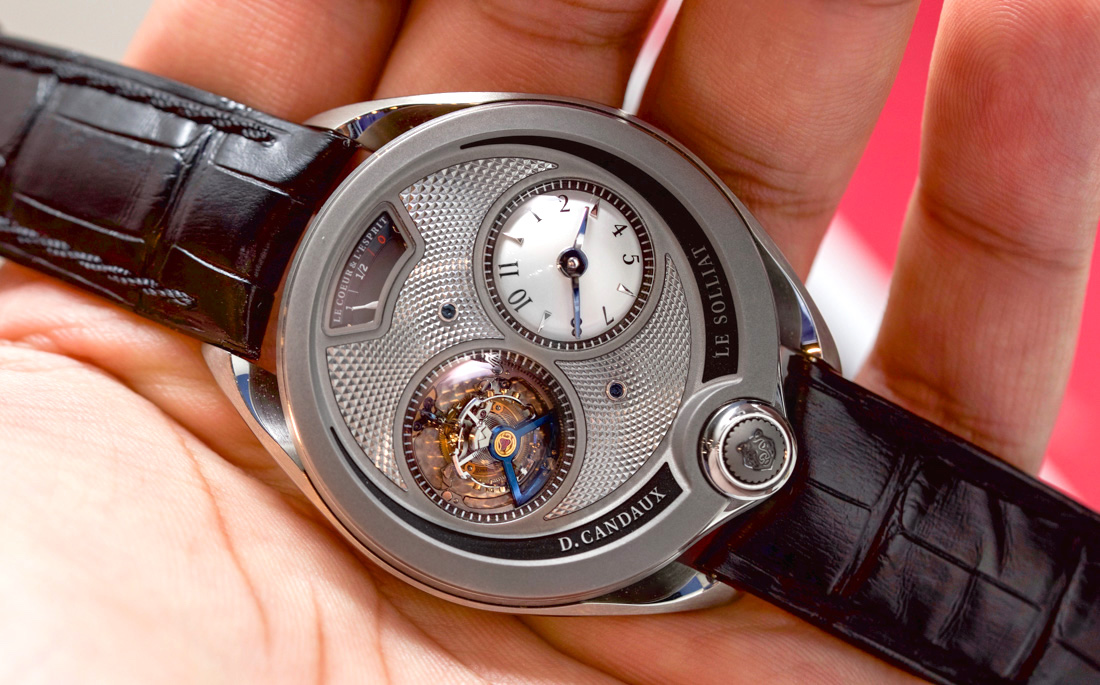 As brands have halo products, the extremely niche world of independent avant-garde haute horology is like the watch industry’s halo, and that is where watches such as those from D. Candaux belong. It’s hard to stand out in such a niche, expensive, and technical space, but these extremely skilled watchmakers sparing no expense or detail pursuing their own visions are at least inspirational to learn about. Explore the D. Candaux website for more tantalizing technical details, but some of the brand’s materials are unclear or inconsistent in places – independent brands’ communication is often not as polished as their products, but perhaps that is part of the charm. The D. Candaux 1740 Half Hunter Tourbillon watch will be produced in a limited edition of only eight pieces with a price of $265,000 USD each. dcandaux.ch