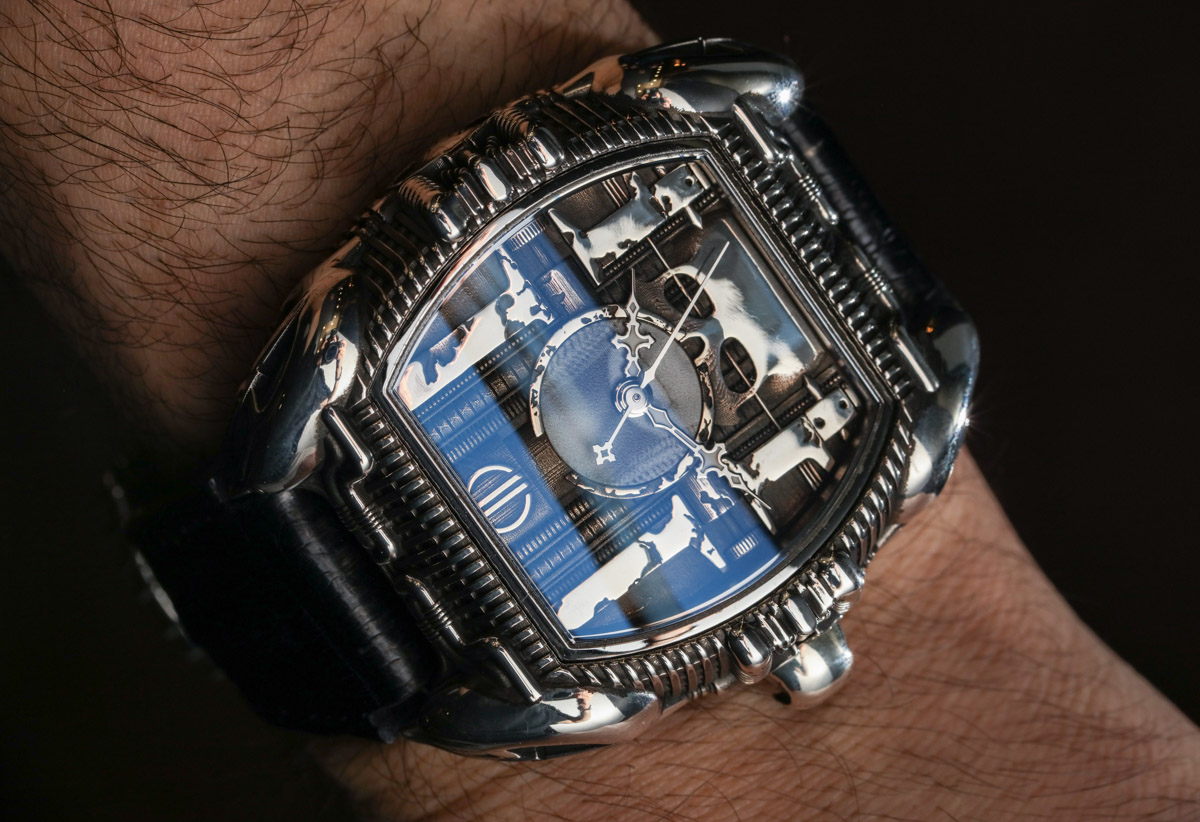 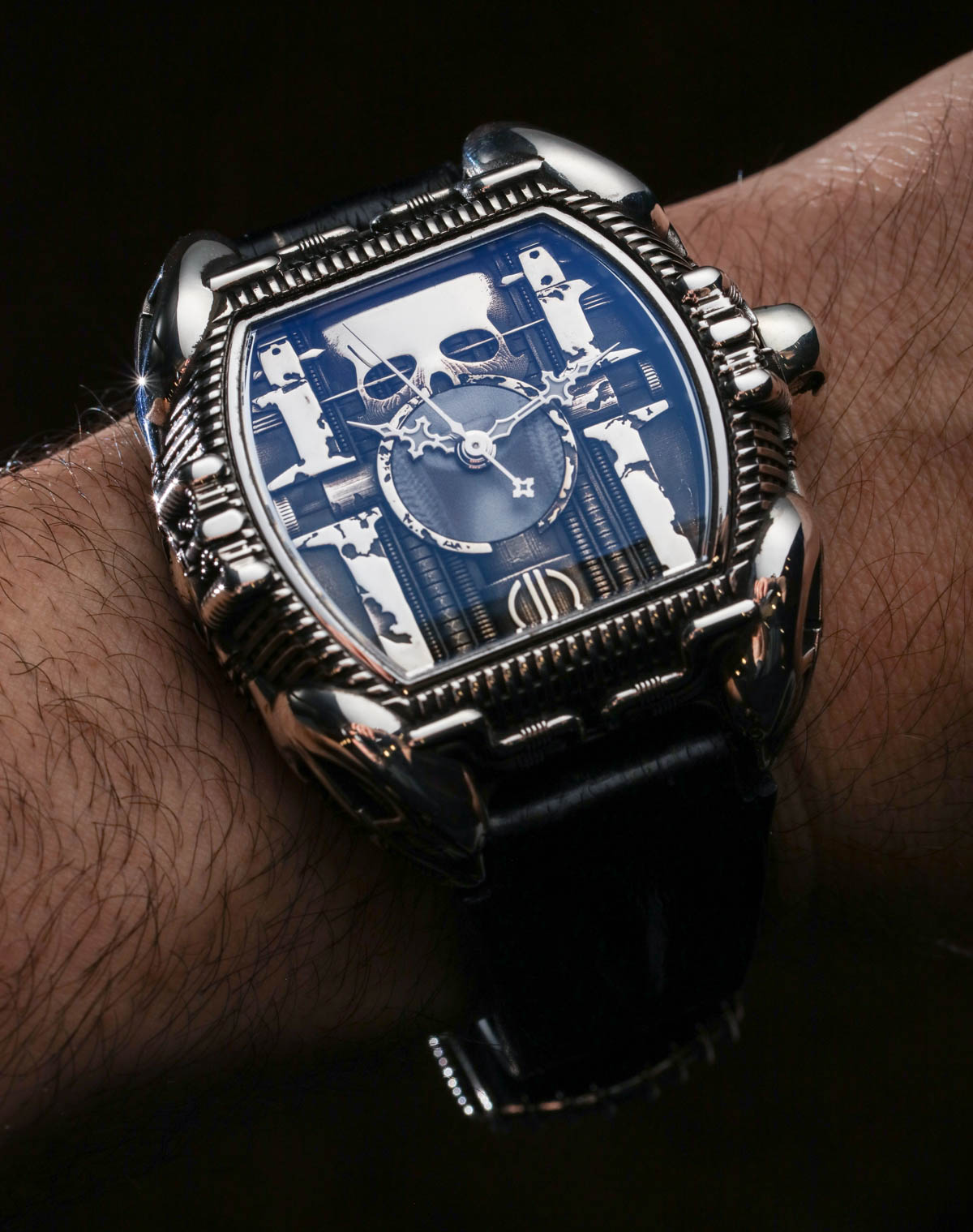 I was happy to get a chance to check out some interesting watches I’ve wanted to see for a while at Baselworld 2018 recently. The smaller show size allowed several brands that previously didn’t officially present at the trade show to be there, including the boutique Daniel Strom – which I believe is now renamed to “Strom.” A new addition to the Swiss brand’s Agonium collection is the “In Memoriam HR Giger” watch that is currently available in two limited edition models.

Mr. Daniel Strom himself meets me wearing “on-brand” black plastic glasses with small engraved metal skulls on the nose rest… I knew I was speaking to the right guy. My interest in the brand focuses on the “heavy metal” style artistry found in the cases and dials. I’m a big fan of hand-engraved or otherwise complicated cases, so the general Agonium collection is interesting to me. 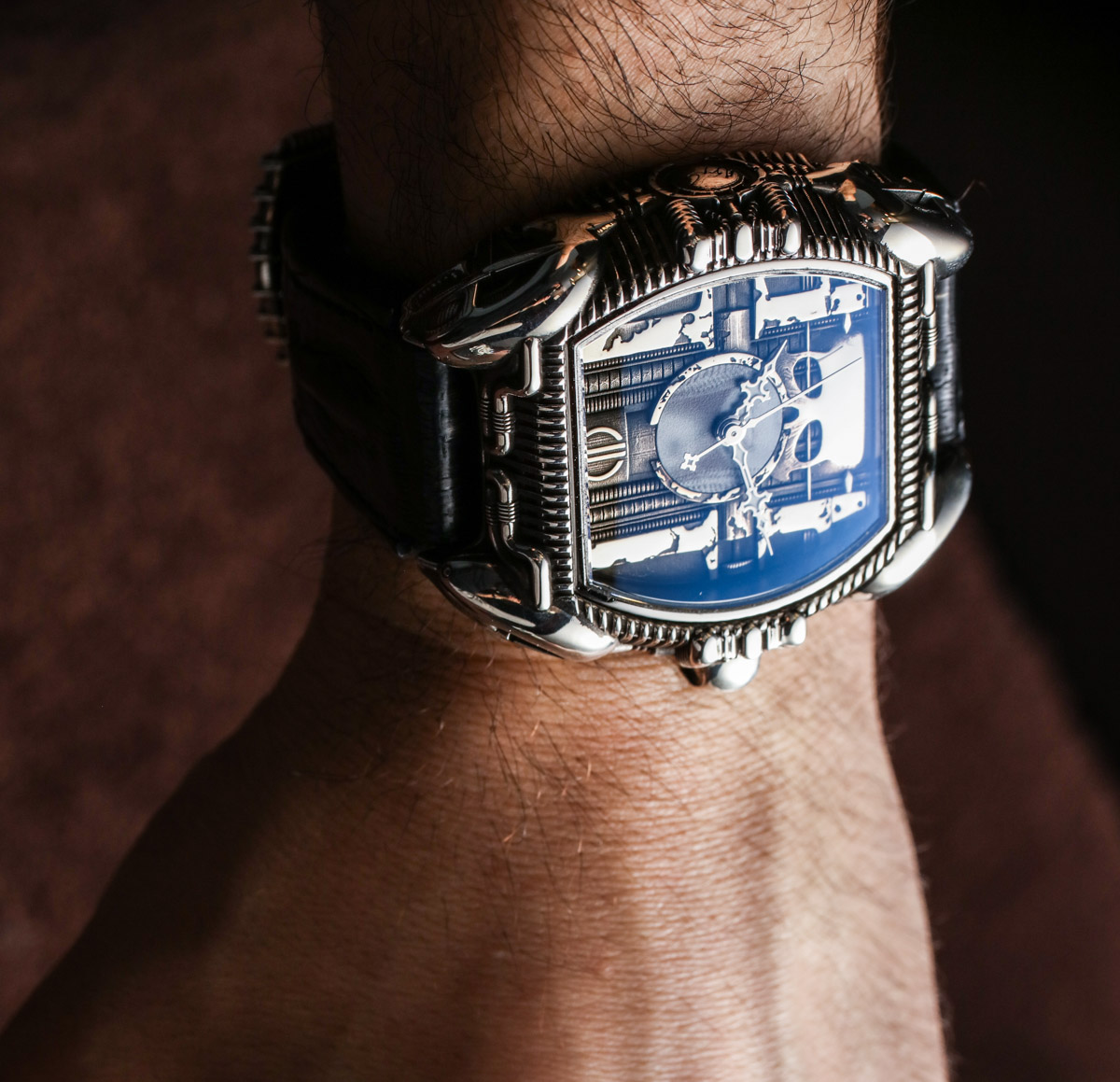 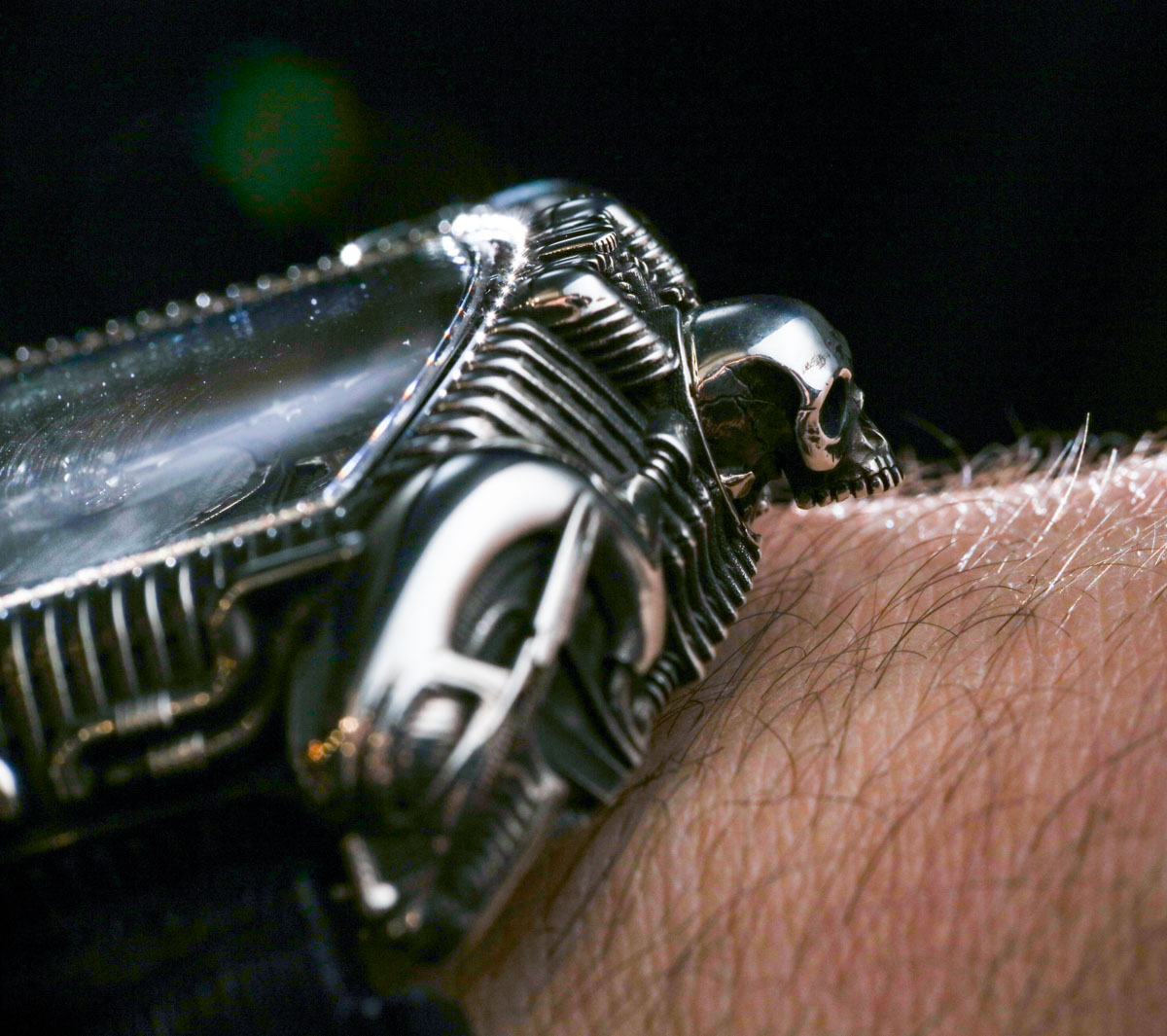 When I first learned about the Agonium In Memoriam HR Giger watch it was presented about four years after Mr. H.R. Giger himself died. The famous Swiss artist is best known for creating the “Xenomorphs” in the Alien movie franchises. More generally he was fascinated with the gritty intersection of machinery and organisms in the context of sex, death, and architecture. Perhaps the most impressive thing I learned about this limited edition watch is that it was not merely designed to be inspired by the work of H.R. Giger, but was designed by H.R. Giger himself. Mr. Strom confirmed this fact to me when we spoke about his relationship with the now late artist. Apparently the design of these Daniel Strom Agonium watches was completed prior to when Mr. Giger passed away, but given the artist’s death the brand didn’t want to release the watch too close to his passing. That makes sense but is somewhat ironic for a brand that seems to celebrate skulls and death so much in a lot of their products.

The idea that H.R. Giger himself actually designed the In Memoriam HR Giger means a lot to me – though I am sure he had nothing to do with the name. According to Strom, the composition of the watch’s dial is inspired by a 1973 H.R. Giger piece known as Brain Salad Surgery. This is before the late 1970s release of the original Alien movie, but you can see Alien-like creatures that make up the lugs of the watch case. Detailing all over the watch and dial is fantastic, and you really get the sense that you are wearing a piece of art more than a traditional timepiece. Of course, appreciating the watch is a matter of taste, as not everyone has an appreciation for this particular aesthetic. If you (like me) grew up fascinated by the work of H.R. Giger, I think you’ll find the Strom Agonium In Memoriam HR Giger watch very satisfying. 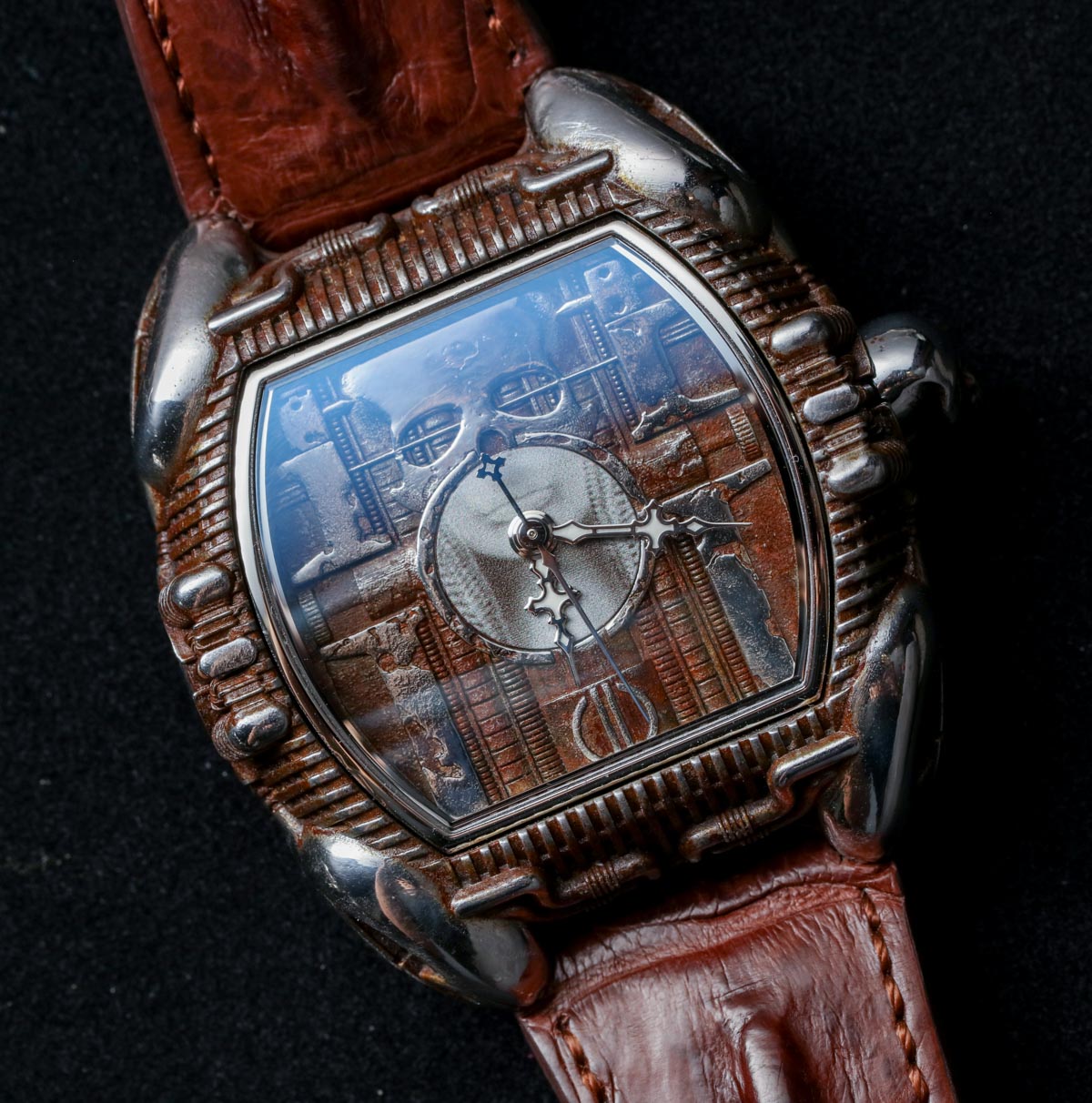 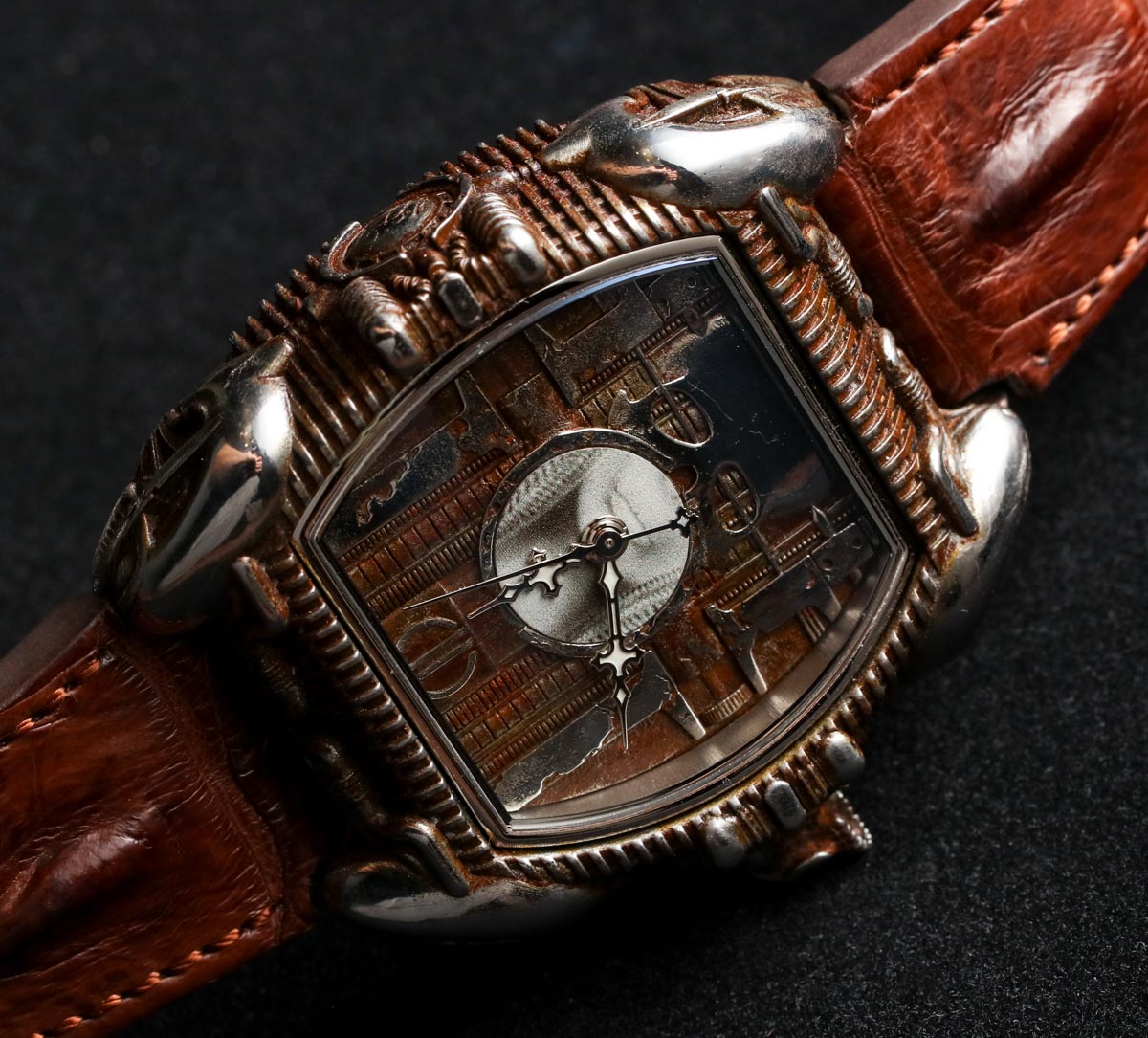 Strom will produce two limited edition versions of the Agonium HR Giger (as I will refer to it) and each is cool in its own way. First is a model in an engraved 925 silver case and the other is in rusted iron (they call it the “In Memoriam HR Giger” Rusty Iron). Silver is a rare material to be used for watch cases thanks to the metal’s tendency to tarnish and because it is on the softer side. With that said, silver engraves very nicely and is ideal for making detailed cases such as this. With the theme of the watch and the popularity of tarnishing bronze cases, silver might find its way back into more mainstream watches soon.

The most avant-garde of these is a version of the Agonium HR Giger in the intentionally rusted iron. Rather than silver, the case is produced from engraved iron, and then intentionally rusted. Why do this? Well, the most direct reason is because that is what H.R. Giger himself did with a lot of his sculptures. So rusted metal seems to make sense in a wristwatch design. The process is interesting because Strom needed to rust the watch enough for the desired look, but not allow for it to rust further (as it would naturally). Thus, the iron version of the HR Giger watch is rusted [to perfection] and then given a clear lacquer coating to seal everything in. The result is actually pretty cool and helps add character to the limited edition Strom Agonium In Memoriam HR Giger watch collection. 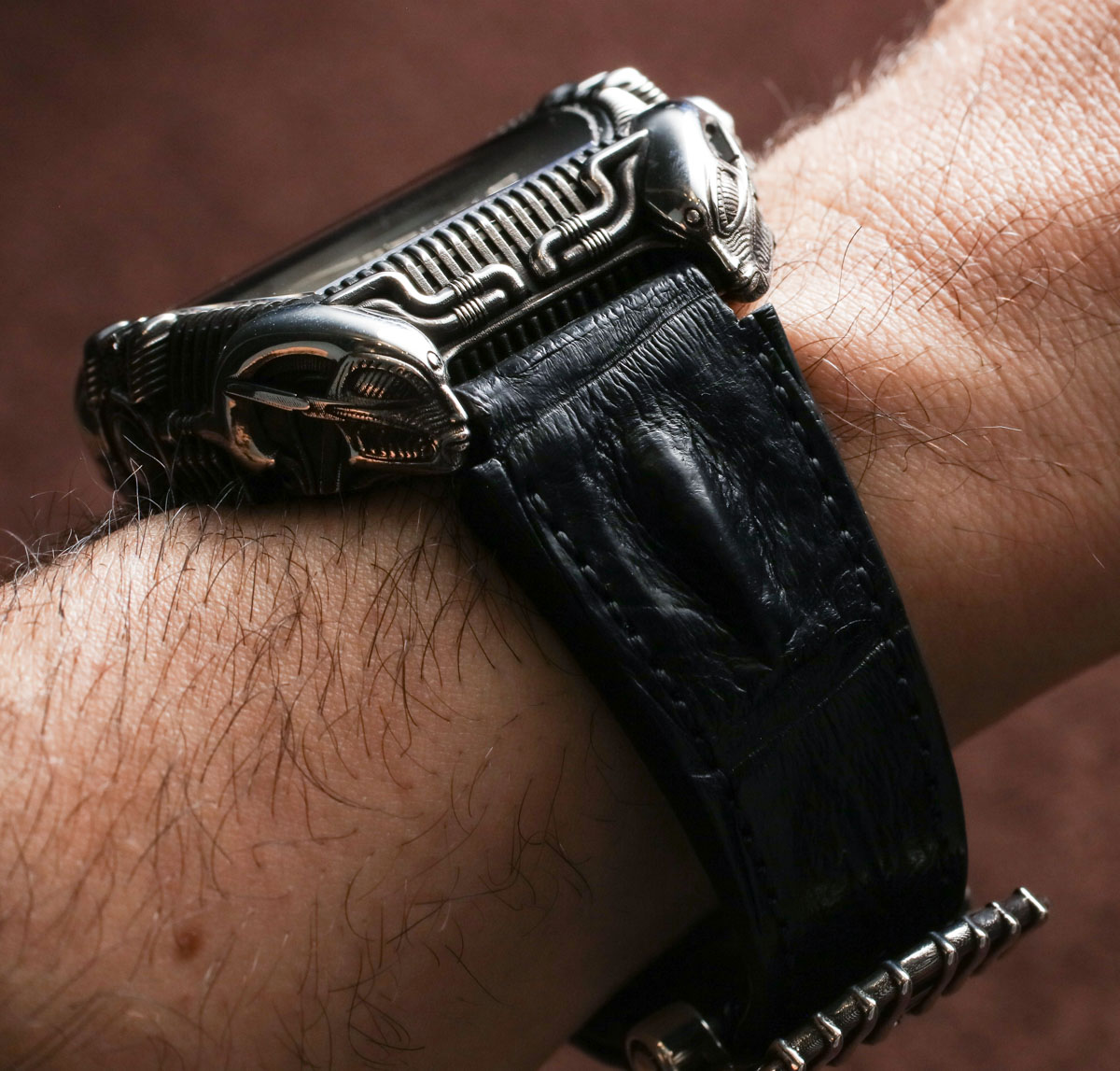 On the wrist the Agonium HR Giger is not small with its already intimidating look and tonneau-style case. The dial hands are not too hard to see, but clearly this isn’t a tool watch. I expect for it to do massively well in Japan. Though, if you have smaller wrists like mine, you’ll need to ask for a shorter hornback alligator strap. Check out that detailing on the matching engraved strap buckle. The watch is 53.2mm wide, 56.5mm long, and 13.8mm thick. The case is also water-resistant to 50m.

Inside the watch is a Swiss automatic movement which is an ETA 2824-2 automatic. Just a decent, common, and reliable mechanism which is fine in a product like this that is much more about art than it is horology. While these Daniel Strom timepieces aren’t for everyone, I really like them quite a bit as an HR Giger fan as well as someone who really admires the idea of a wristwatch being a palette for clearly artistic creations. Each of the watches will come as a limited edition of 99 pieces. Price for the Daniel Strom Agonium In Memoriam HR Giger reference AC17-01.AG.HRG in 925 silver is 16,999 CHF and the Agonium In Memoriam HR Giger reference AC18-01.IR.HRG in “stabilized” rusty iron is 17,999 CHF. stromwatch.swiss