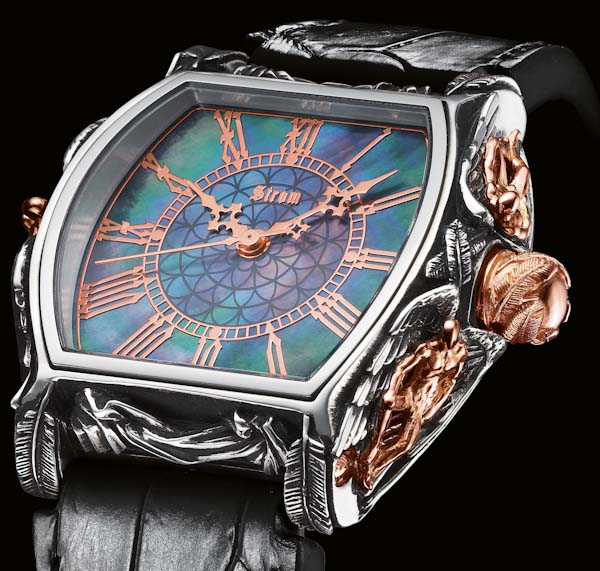 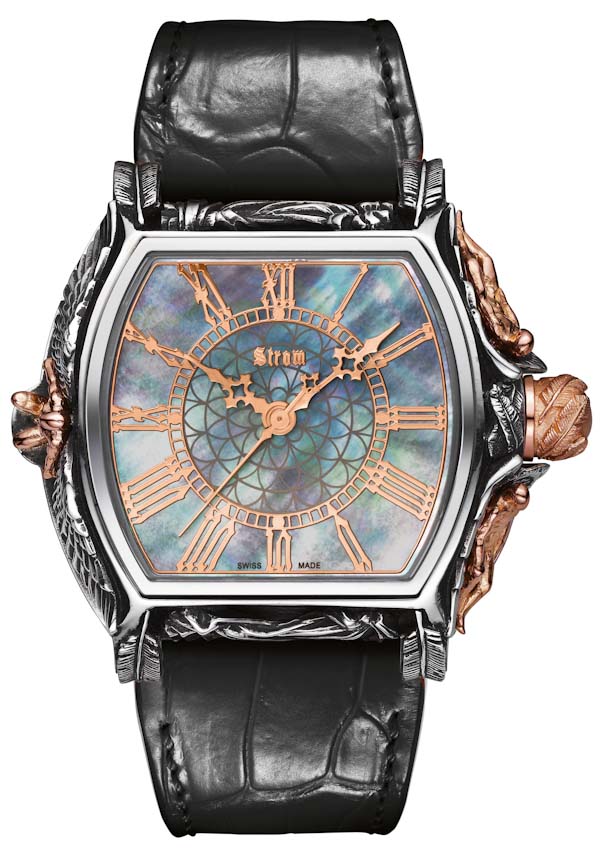 If you fancy a watch with engraved feathers and what look like naked male mannequins, the new Angelus by Daniel Strom could be perfect for you.  This timepiece is the thematic antecedent to the previous Daniel Strom Agonium that came out about two years ago. The Agonium focused on imagery of skulls and death (I called it the ultimate goth watch), while the Angelus is about angels – yet it still feels rather Gothic.

Daniel Strom hand-sculpts the design on the tonneau style case, and it is available in pretty much any luxury metal you want. Sorry, no steel or titanium models. Why? Too hard to engrave – especially titanium. Wow, what a pain that would be. However, the Angelus case is actually two sections. An inner steel barrel and an outer section which is engraved. The Angelus design aesthetic is like “serious angels.” Thematically serious to the point of being a bit creepy. I mean at least the skulls on the Agonium had faces. These guys all look like posing artist’s dolls, and put into oddly provocative positions. There are also enough feathers engraved on this watch to almost make it Native American themed. That is especially the case with all the turquoise tones in the optional black (Tahitian) mother-of-pearl dial. 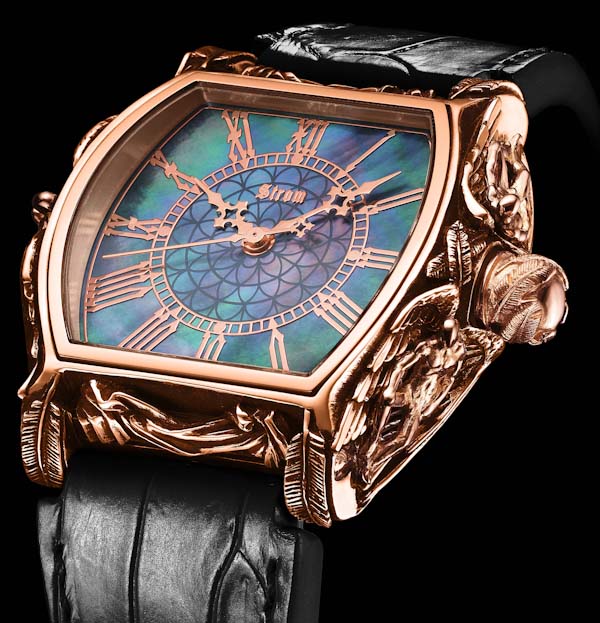 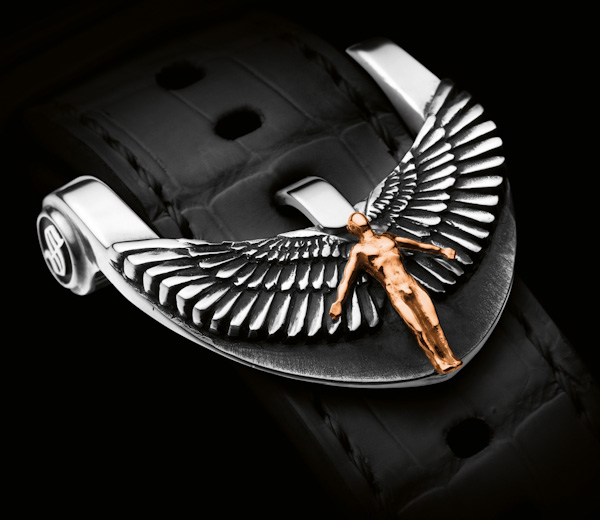 The Angelus, like other Daniel Strom watches are intended to be highly customizable. The brand doesn’t even list the size of the case (which just pisses me off). That is like issuing a release on a new car and not including the horsepower rating. That is a necessary product stat, and I feel that not mentioning the size of the case is simply irresponsible to not include in official information about the watch. Anyhow, the men and women of the world interested in these timepieces will have almost full carte blanche to do wild things like have their cats and dogs engraved with angel wings on the case. Well, that might be exaggerating, but it is probably not too far from the truth. Especially if we are talking about one of these watches in platinum. Oh yes, the platinum Angelus is a must have lifestyle accessory for the stylish high-end pious watch nut.

I do like the dial. The vintage Gothic style makes the dial look like a clock face mixed with a stained-glass window. The elaborate hands and stylized Roman numeral hour markers are fun because they are so out of place in the everyday world – well at least my world. Daniel Strom offers the Angelus with a traditional white or black mother-of-pearl dial. It isn’t easy to pull off a mother-of-pearl dial in a men’s watch, but I think this piece can more or less do it if you are keen on the rest of the Angelus. Having said that, Daniel Strom offers the Angelus on a white strap – meaning (rock star) ladies are also likely encouraged to wear one. 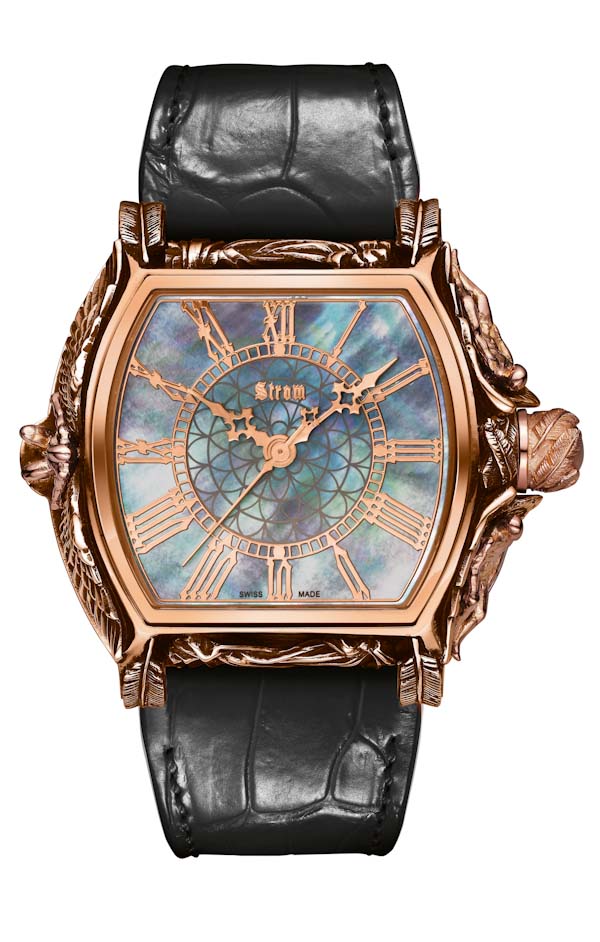 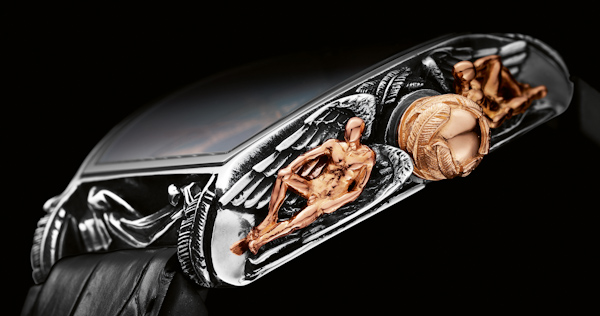 Inside the Daniel Strom Angelus is the same Swiss ETA 2824-2 automatic movement as in the Agonium. Nothing very complicated, but aside from being a mechanical timepiece, this watch isn’t about having a fancy movement. All of the models are limited editions. Daniel Strom’s basic Angelus model is in solid sterling silver (88 pieces at 9,999 Swiss Francs). Again, because it is sort of precious, and silver is much easier to engrave than steel. Some models have the angels and crown in 18k red gold (88 pieces at 10,999 Swiss Francs). There is also a solid 18k red gold version of the Angelus available (44 pieces at 27,555 Swiss Francs), as well as models in palladium (44 pieces at 19,999 Swiss Francs), and of course platinum (12 pieces at 59,999 Swiss Francs). The 925 silver model with the gold piece is probably the best value – but that is of course purely relatively speaking. My dark side still sides with the Agonium.