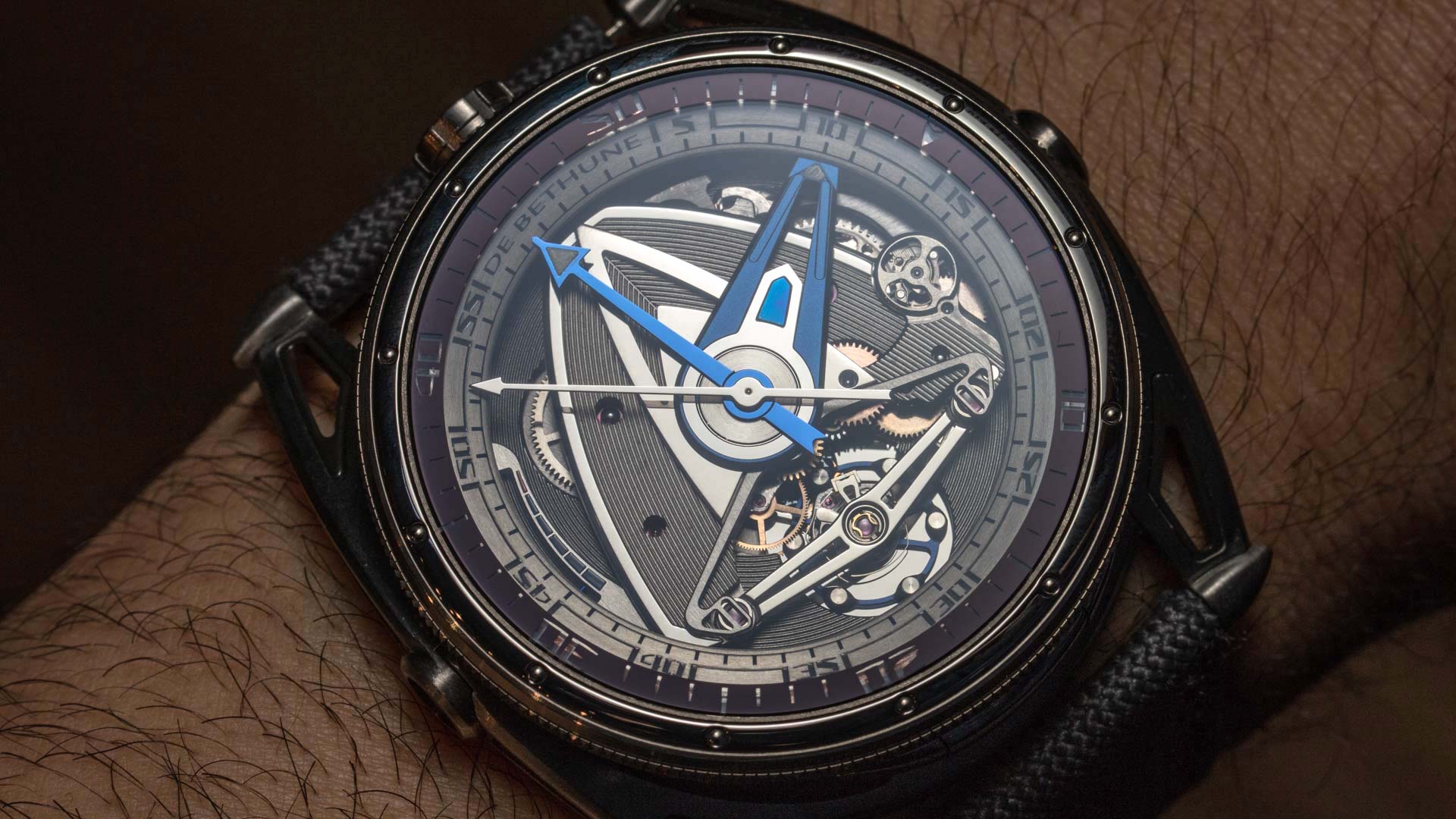 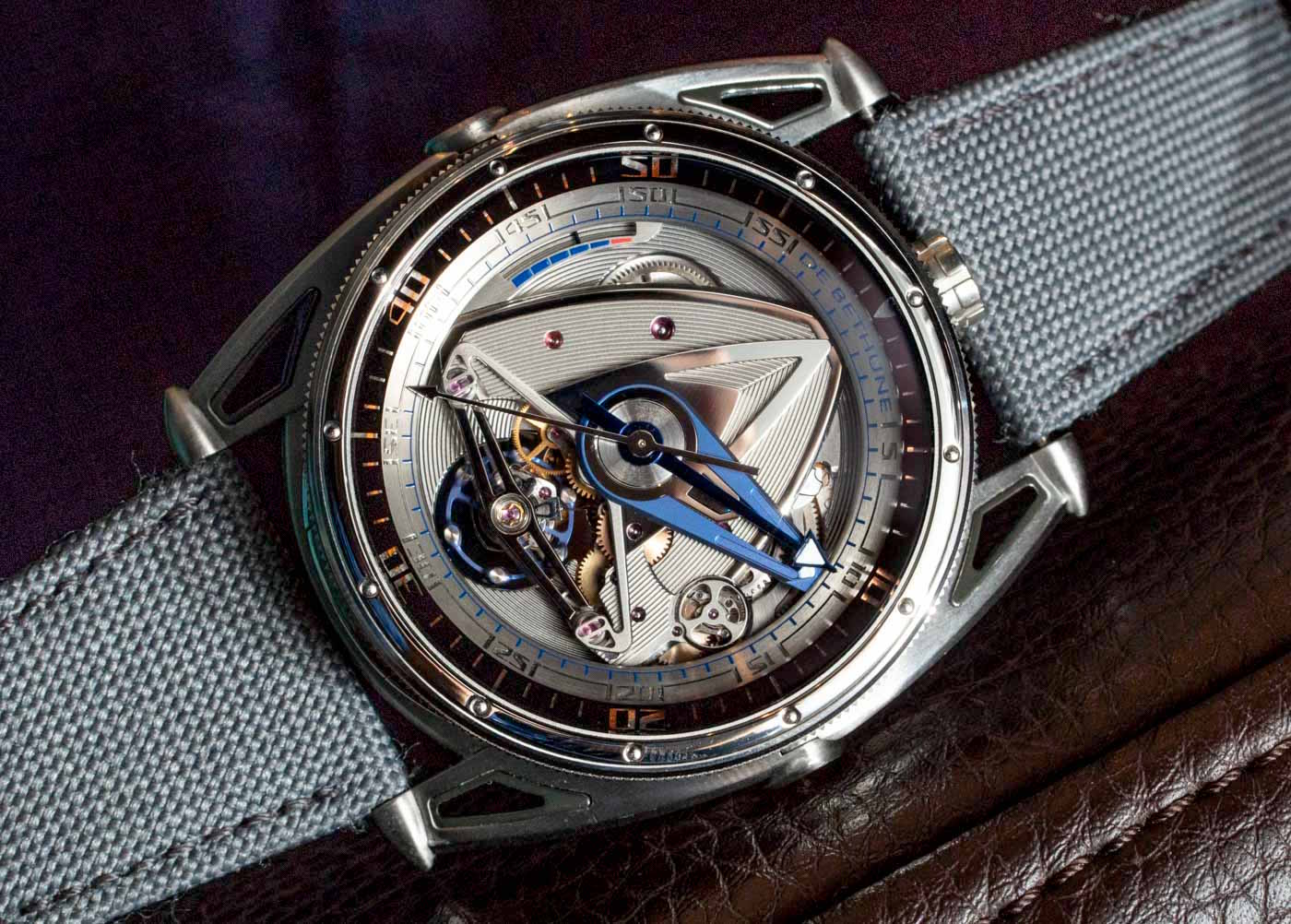 With the De Bethune DB28 GS Grand Bleu, the brand presented what it called “its first 100% sports watch.” First things first, that’s cute. De Bethune has earned its reputation as an horological sculptor of sorts — often quite literally sculpting watches out of meteorite, for example. With swiveling case sections, arched and skeletonized lug structures, spaceship-like movements and so on, this small, yet notable independent has been among those few who ventured beyond the cliché of “watchmaking art” and turned it into a work that actually resembles art. With all that said, let us see how well art and sports go together. 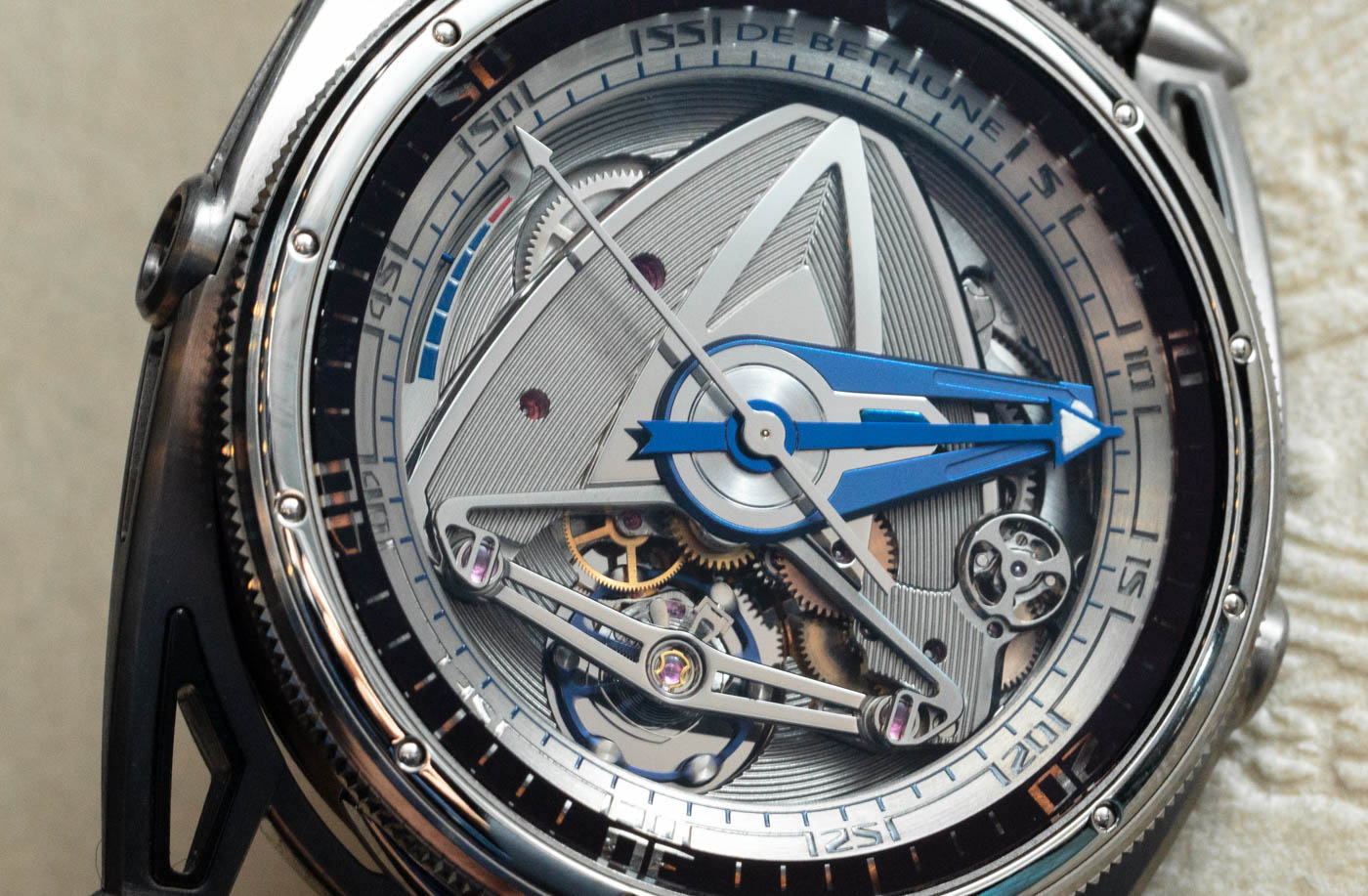 I will not dwell on the artistic aspect much longer — mostly because the “watches are like art” cliché is so terribly bad and so awfully over-used in horological discussions that in those few instances like this one where it could possibly be applicable, it’s a moot point already. Anyhow… A new caliber, water resistance “to more than 100 meters,” excellent legibility in the darkest depths thanks to ingenious lighting inside the movement, a rotating bezel, a titanium case, a rubber strap and a five-day power reserve. 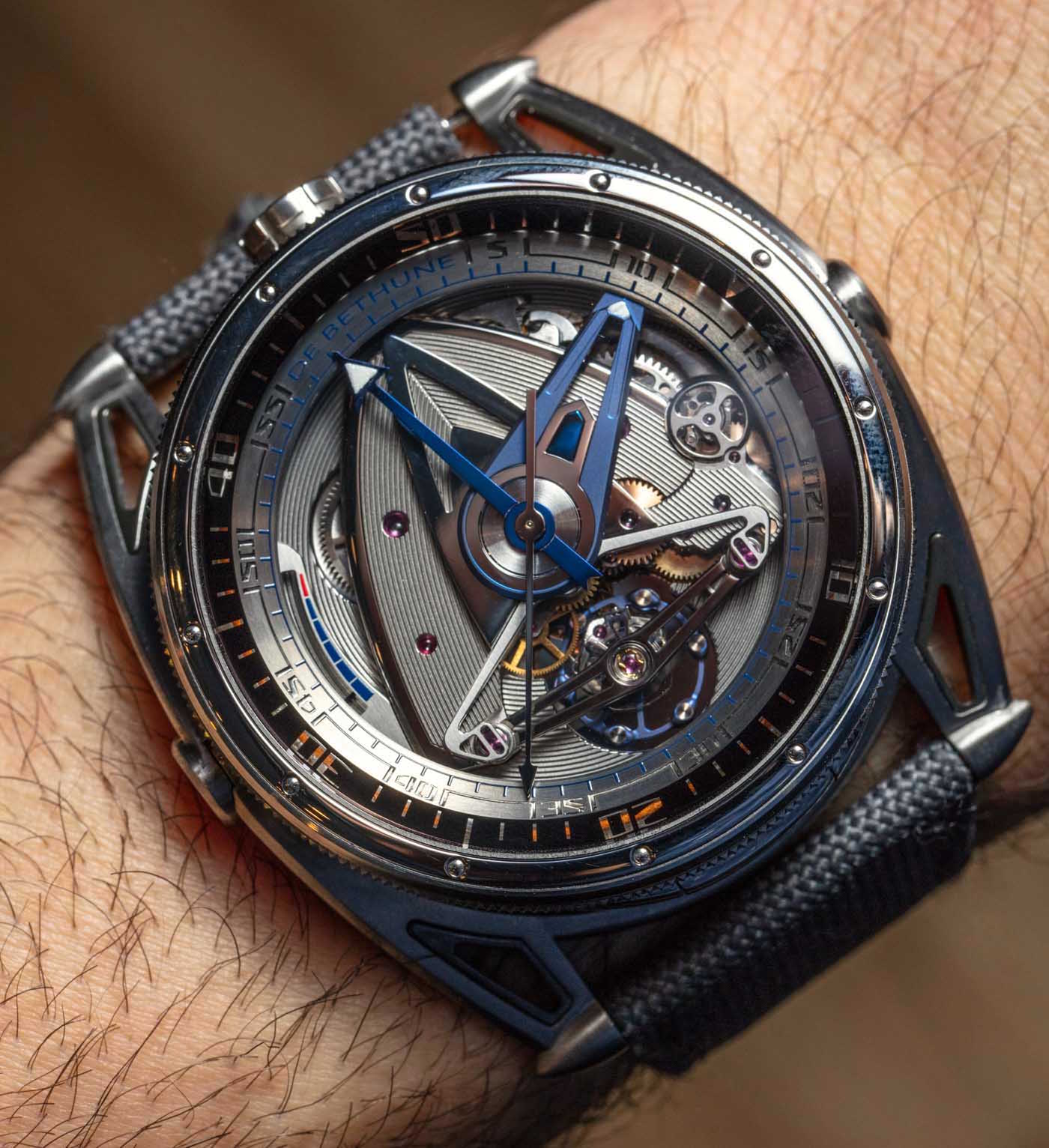 That is the shopping list that De Bethune had thrown at their DB28 range when creating the DB28 GS Grand Bleu. Back in 2015 there had already been a DB28 Grand Sport — though, apparently, that was “Grand” and not “100%” sport. A quick glance at the new piece reveals a big push from the submarine-like Grand Sport’s brutalist exterior to a rather more sports instrument inspired presentation. 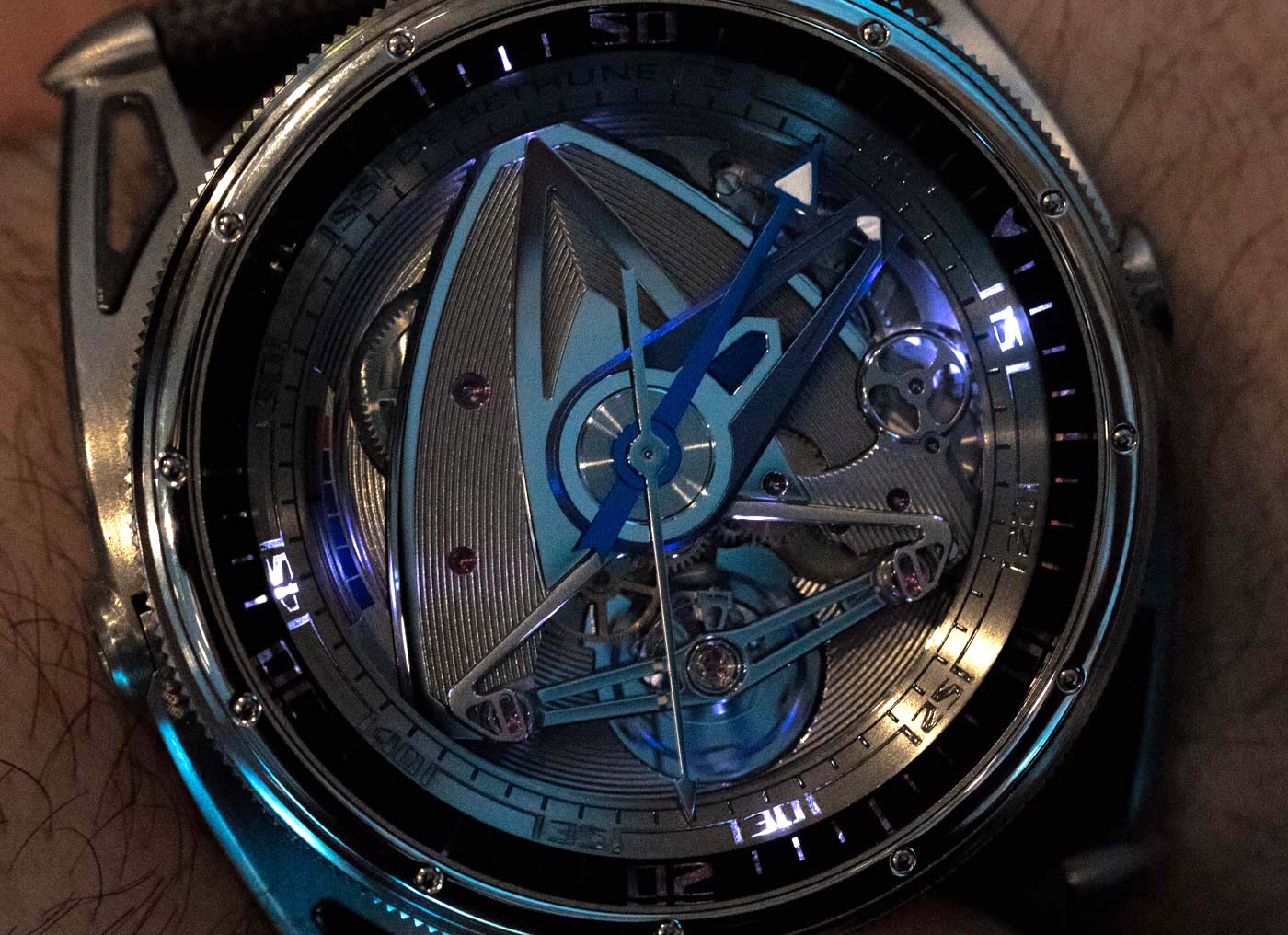 Like a proper instrument, the DB28 GS Grand Bleu can light up in the dark. A fully mechanical light, based on the dynamo principle, is activated by the pusher at the 6 o’clock position: a small gear train, driven by the twin barrel, provides the necessary energy to light the watch. De Bethune says a few seconds of light is more than enough to read the time which is hard to argue with. Though I’m sure they know that the lucky owners of the Grand Bleu will be using this feature not just for the tedious activity of checking the time, but to amuse themselves and impress their peers… Something a mechanical torch feature nestled inside a De Bethune will more than suffice for. 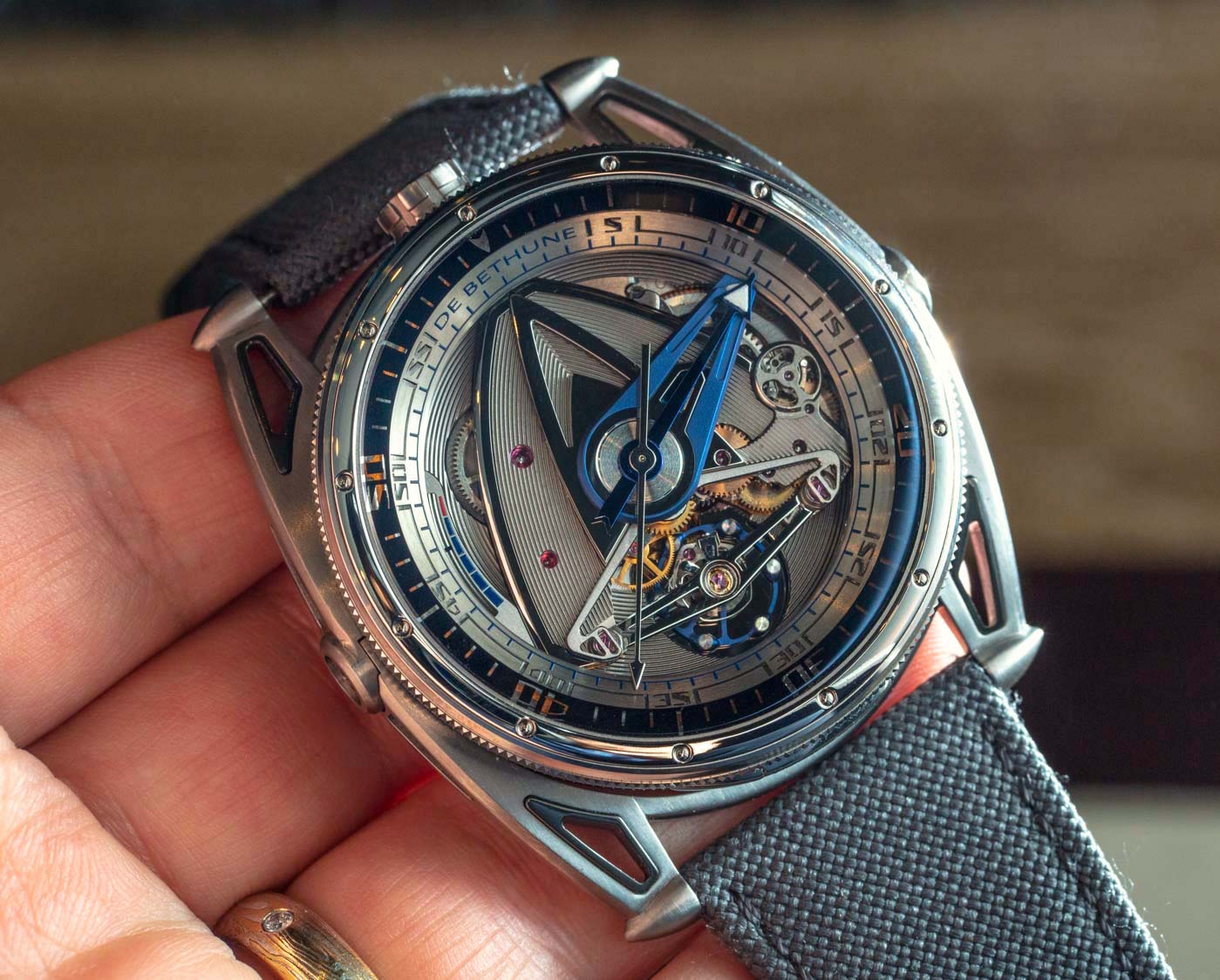 De Bethune neatly disguised the fact that this new model has a rotating timing bezel. The knurled edge of the titanium bezel could give this feature away, but nothing more. Once you do try to rotate the bezel, you will see that the crystal and its 60-minute graduations move right along with it, allowing you to set up the zero marker against the current time and begin your timing procedure. This solution, developed in the workshops of the manufacture in L’Auberson, allows the DB28 GS Grand Bleu to have a slim bezel with a timing chart that appears to be a regular 60-minute graduation set on the periphery of the dial. Kudos for such an elegant way of avoiding the recurring dive watch look. 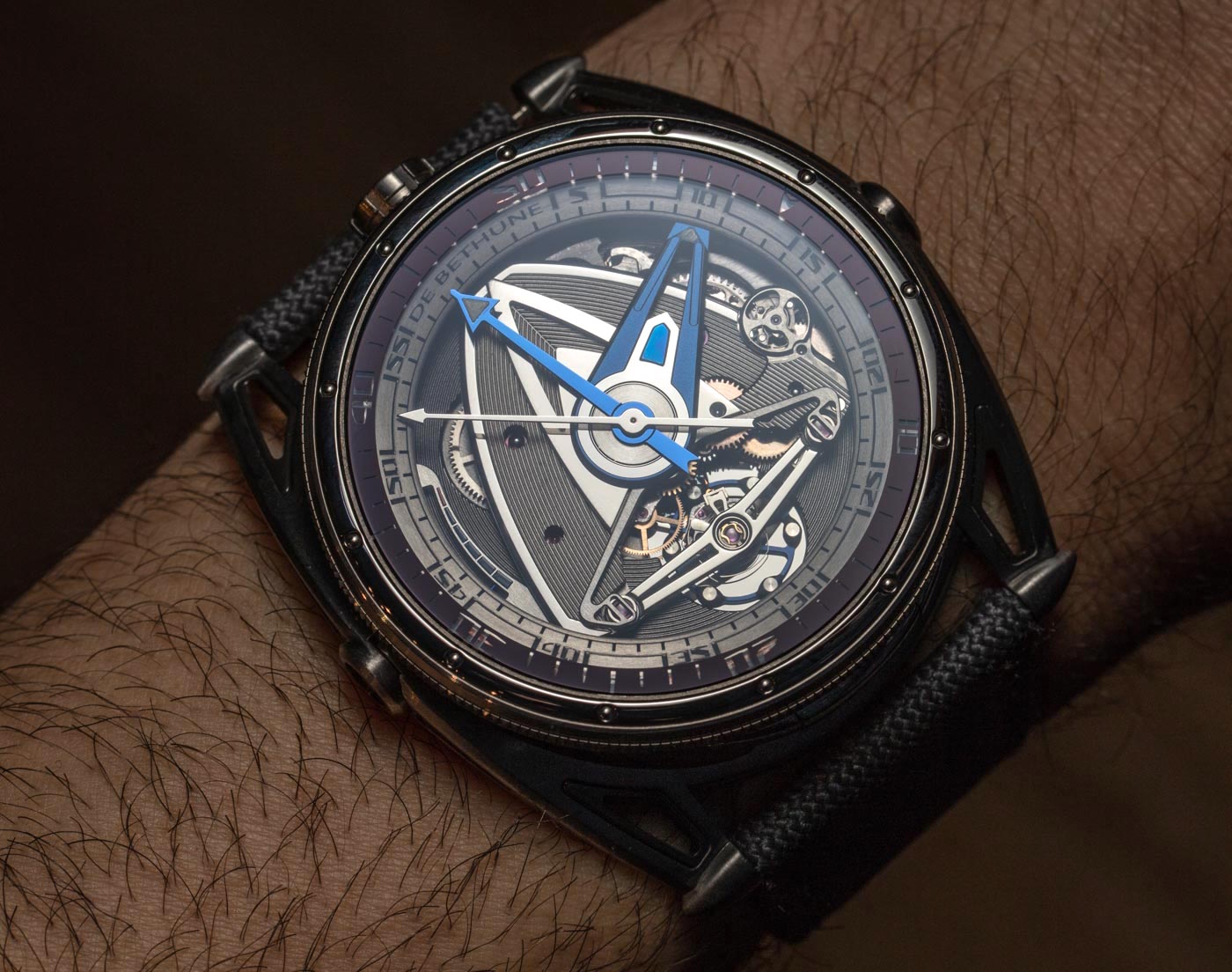 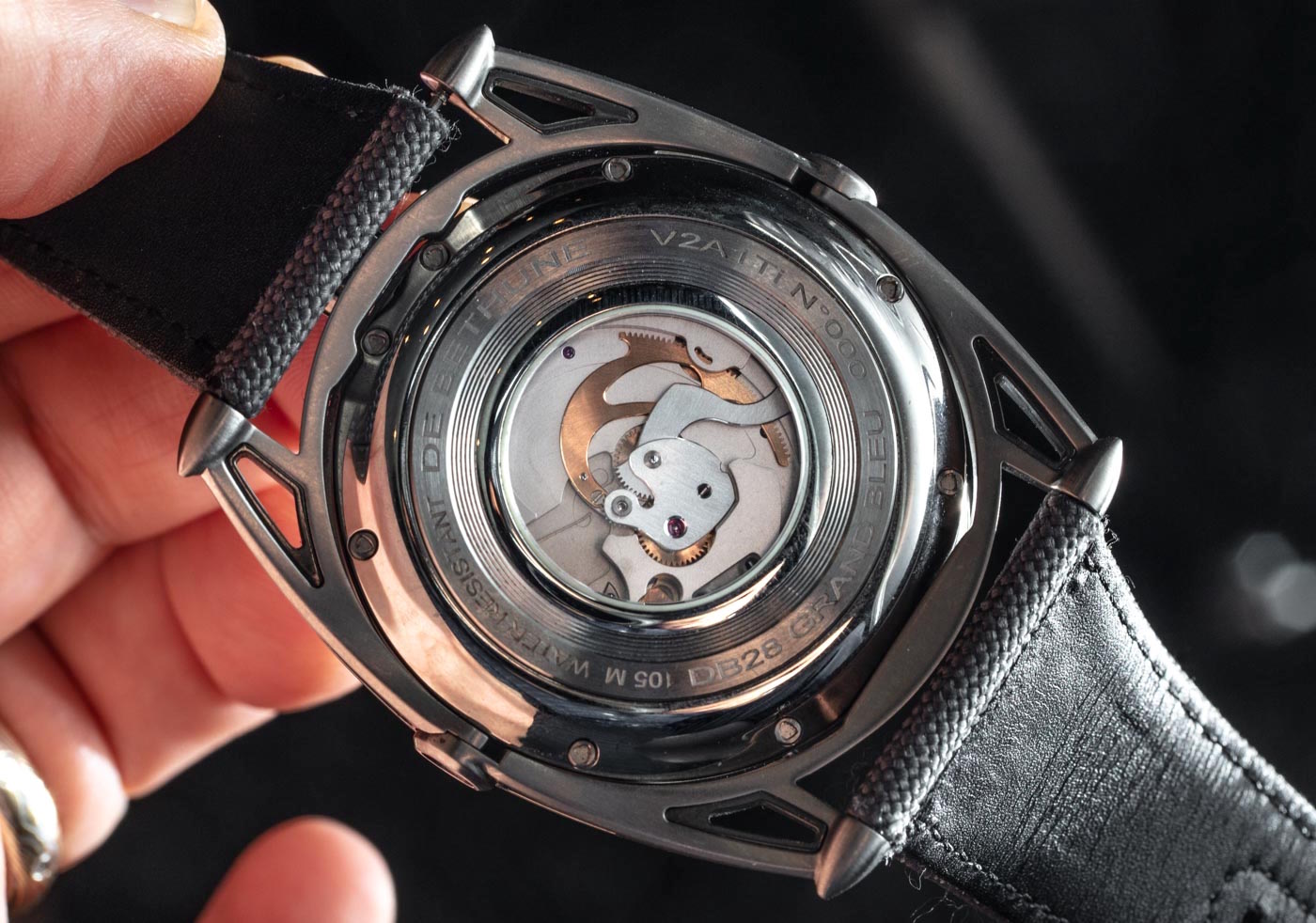 The DB28 GS Grand Bleu sports a new caliber — a whopping 27th in the line of De Bethune calibers. With its hand-wound twin barrels, it allows for 5 days of power reserve, even at the modern and more stable operating frequency of 28,800 vph. De Bethune had thrown a number of high-end watchmaking solutions at this in-house caliber: “optimized efficiency, reliability, regulating quality, thermo-compensation and anti-magnetism” are all on the list, including a 20% increase of power reserve attained just from the improved efficiency of its “sprung-balance-escapement ensemble.” In other words, the point is that any De Bethune customer can sit with the team, go through a 6-pack of Deutz Brut Classic and spend the night talking the ooh’s and aah’s of horological fiddling. This, as is easy to see, every small brand has to do — because for them it takes more than a few diamonds or a 50¢ Tiffany & Co. logo stamped on a dial to move a high-five-figure watch. 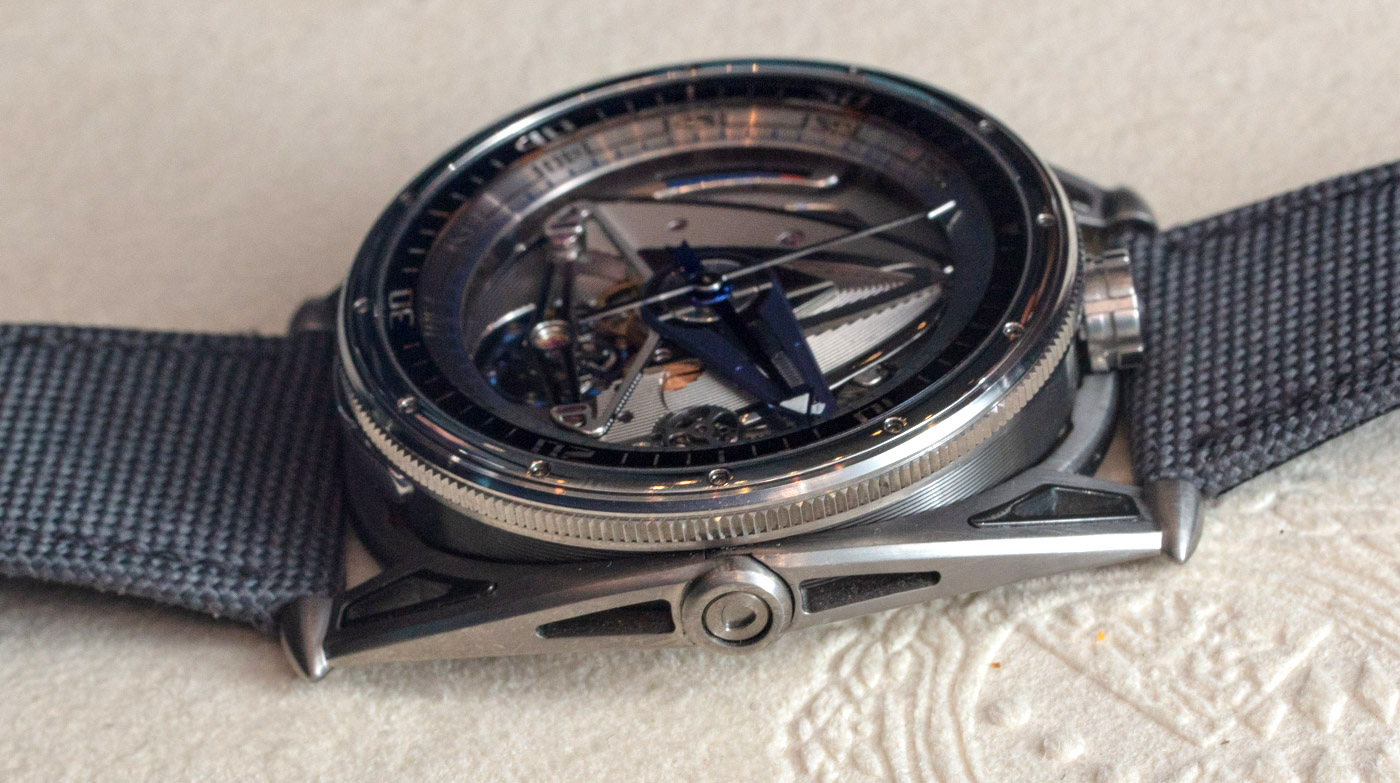 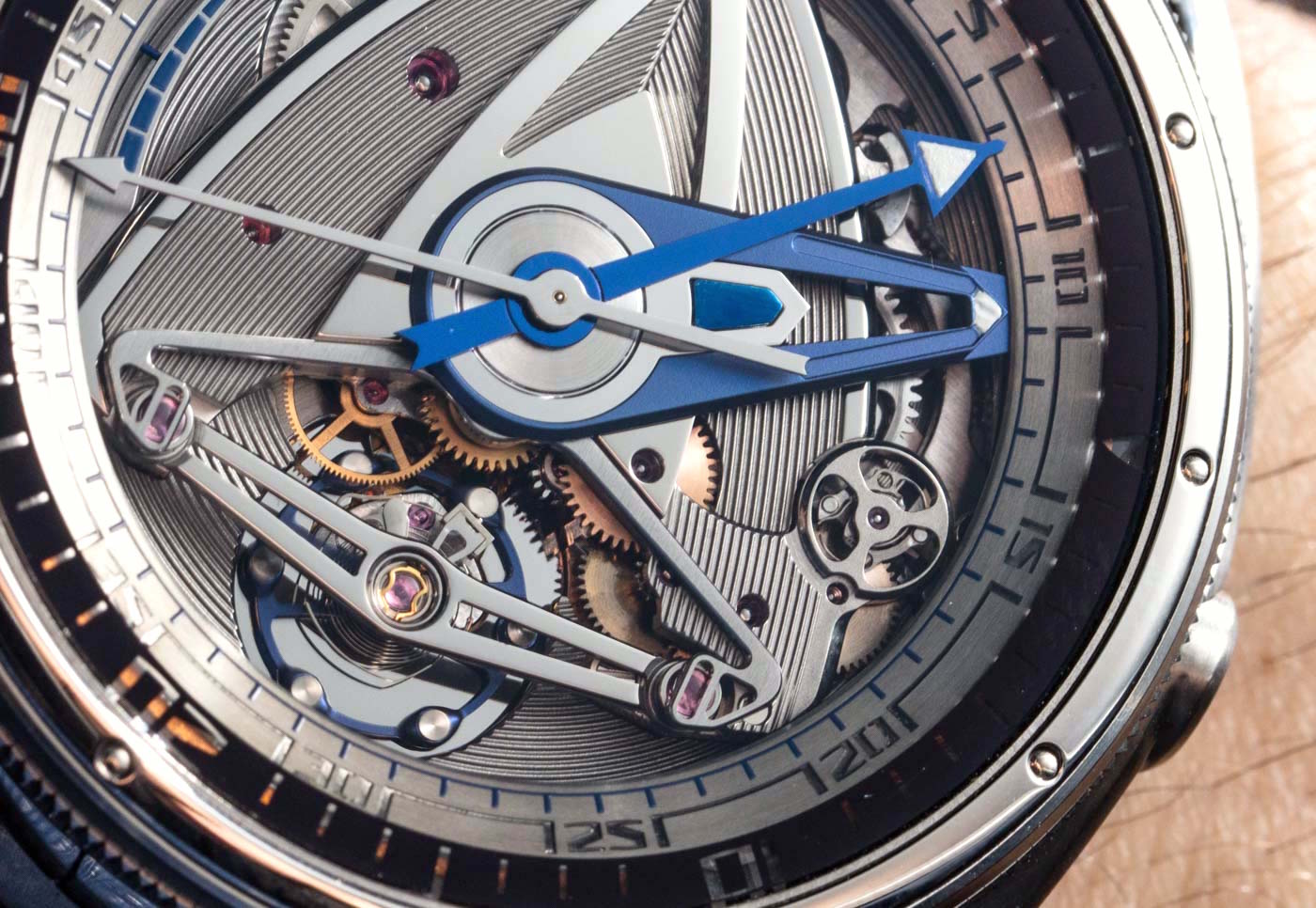 De Bethune praises its new DB28GS Grand Bleu for its watertightness, shock-resistance and wearer comfort — the latter we could get a feel for at SIHH 2019 when we caught one of these beauties in the wild. To attain long-term comfort and an ideal fit for a wide variety of wrist sizes, De Bethune relies on its patented floating lugs, whereas the upper and lower lug arms can swivel up or down, independently from the other, while the middle case itself raises or lowers like a pod. It’s a neat engineering solution that, once its titanium components have been drizzled with De Bethune’s trademark hand-finished decorations, is as impressive to appreciate as it is fun to interact with. Even the crown has been moved to the 12 o’clock position for enhanced comfort — an appreciable move given the hefty, 44mm diameter of the case and its rectangular footprint. 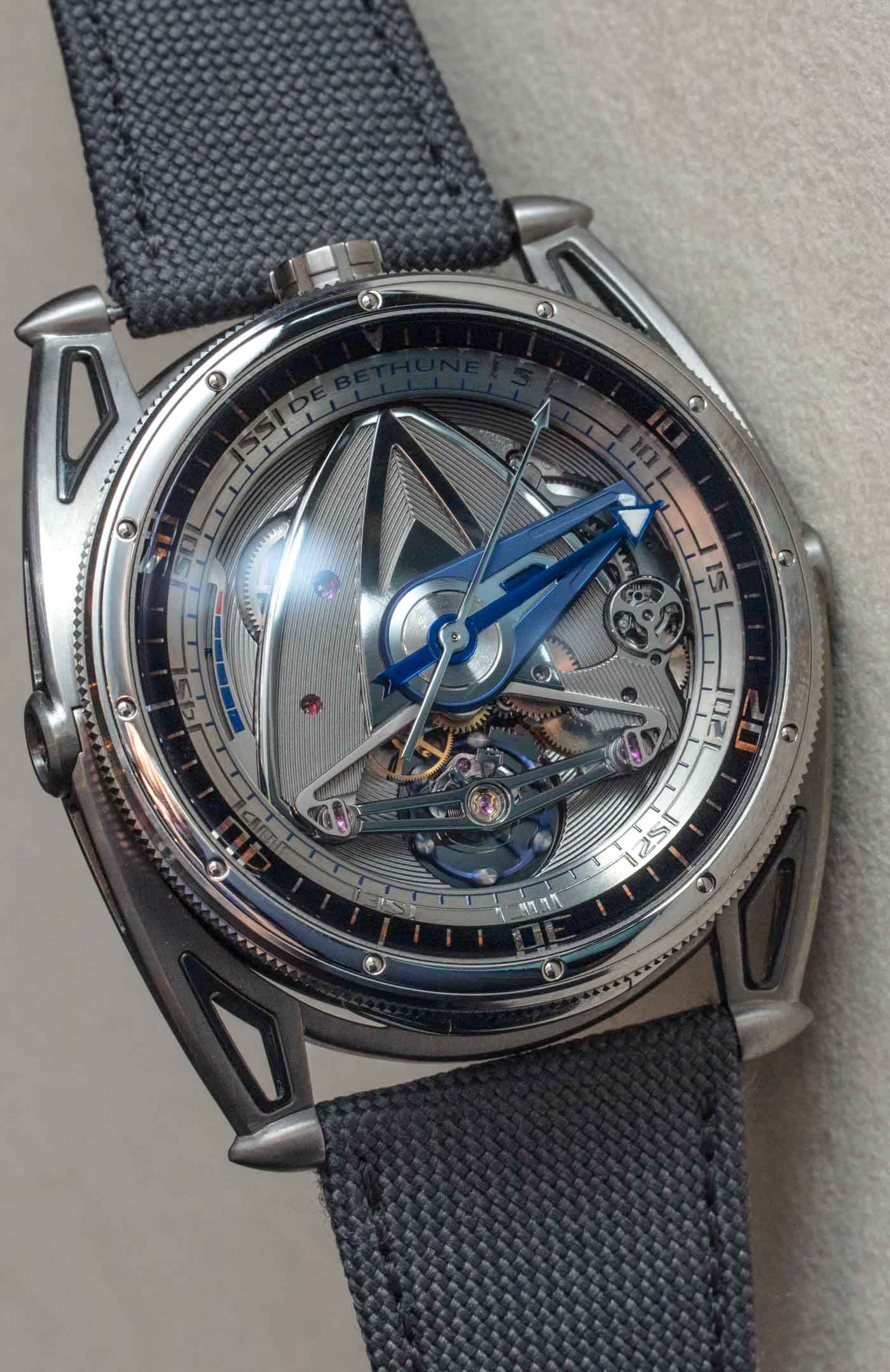 Priced at $93,500, is the De Bethune DB28 GS Grand Bleu a “100% Sports Watch?” Of course not. It’s art, like all De Bethune watches are. But it’s art that you can bump around, if you are a spoiled noveau riche brat — and isn’t that liberating? For every other customer of the 30 pieces made annually, it’s a capable package that is to the brim with De Bethune’s novel and unique engineering solutions and design quirks. You can learn more about these creations at debethune.ch.