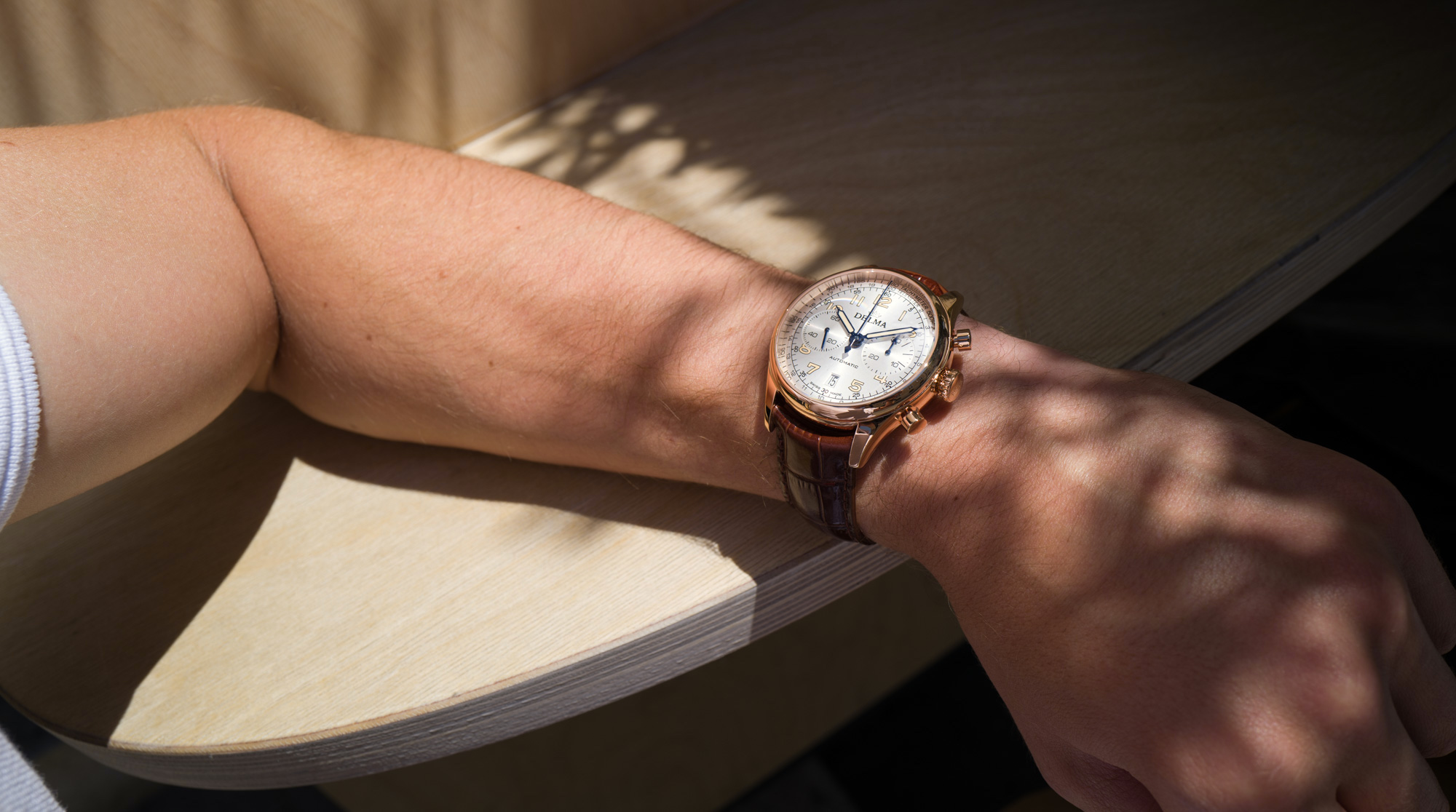 The Delma Heritage Chronograph would be an easily likable watch ideally suited for everyday wear on its own merits — but since we are living in times when celebrating anniversaries and milestones and historic achievements has become an utmost priority, it almost seems a prerequisite for every new watch to have some sort of a historical connection. Worry not, as the Delma Heritage Chronograph traces its roots all the way back to 1946. 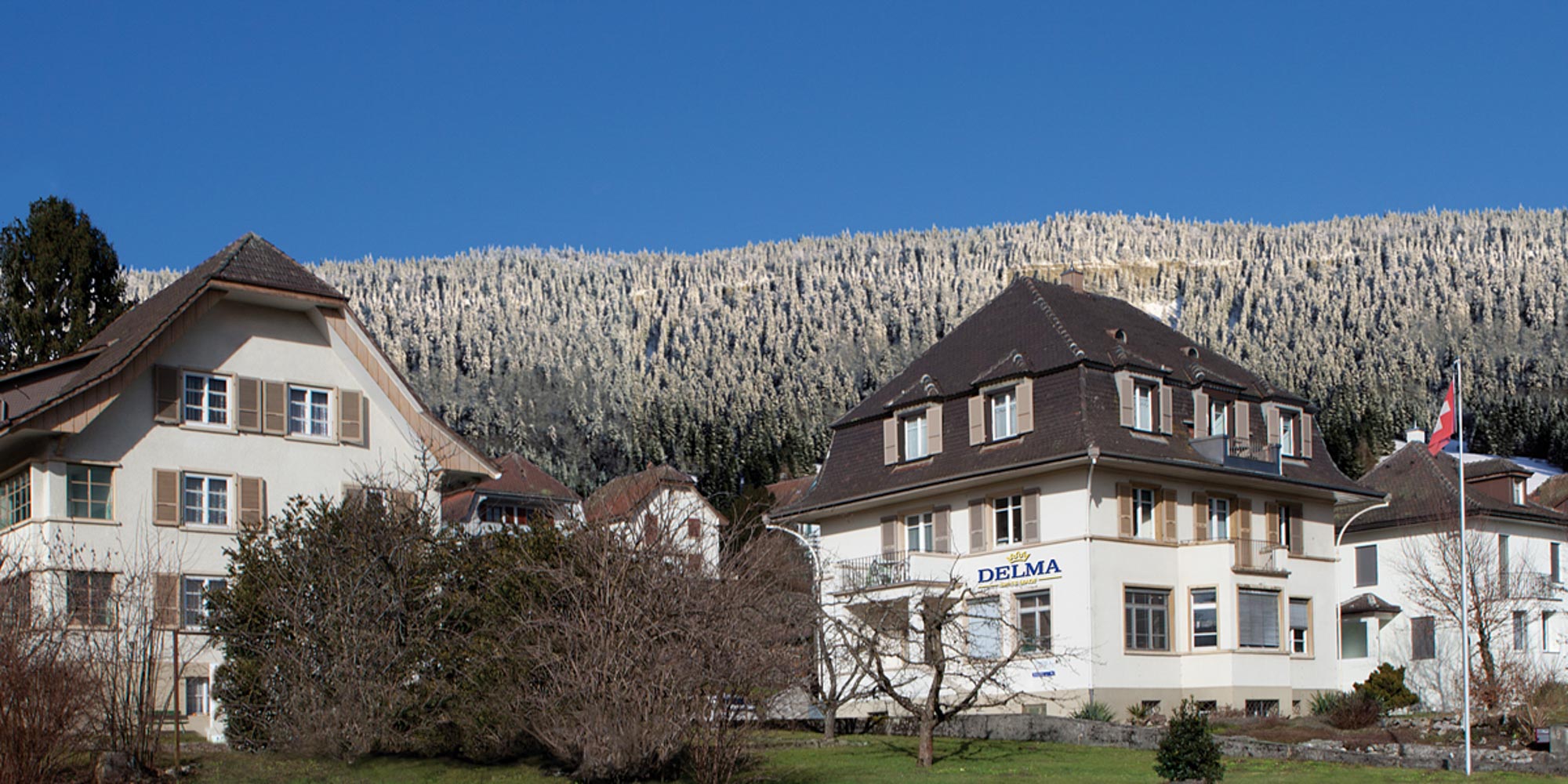 Seventy-five years ago, Delma launched the Delma Midland, a typical-for-the-time dual-subdial chronograph with some atypical features, like a double flange scale with both a tachymeter and telemeter readout combined with a beautifully clean dial center and some proper long and legible hands. Delma’s history as a watchmaker we have discussed before, so we won’t be repeating ourselves here, other than making the point that Delma is, in fact, a small but proper Swiss brand situated a stone’s throw away from industry giants like Breitling, ETA, and other notable companies like Eterna, Fortis, Epos, and a few other ETA facilities, to be sure. Its hometown, Lengnau, and its next-door neighbor, Grenchen, are home to some proper Swiss watchmaking powerhouses. 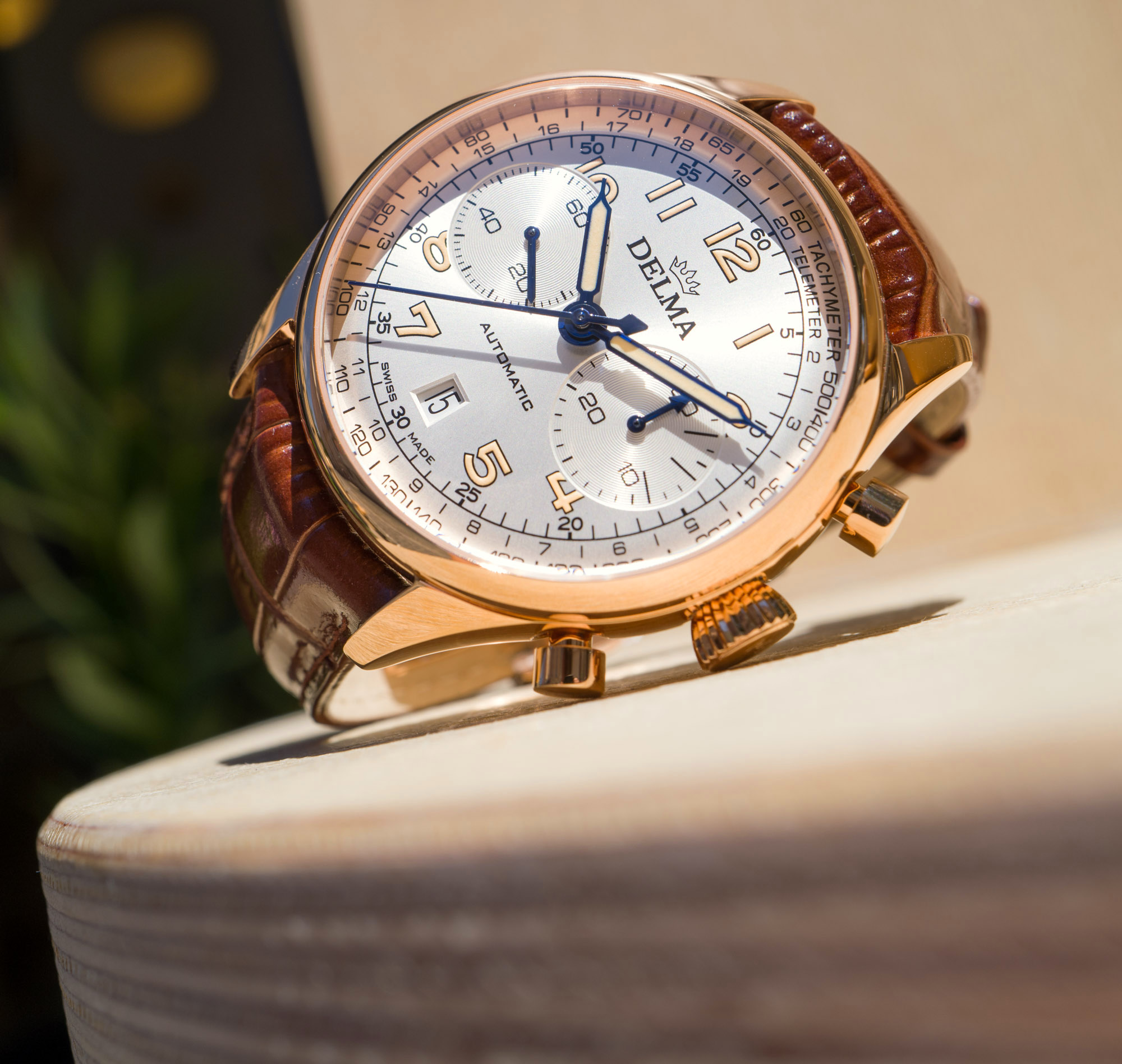 We’ll talk design, wearability and execution soon enough, but we’ll begin by pointing out a surprising aspect of the Delma Heritage Chronograph LE: It is limited to just 75 pieces in its rose gold and yellow gold-coated versions, as well as in its polished stainless steel version. That’s a low volume for something that looks like it could easily function as a permanent offering in the collection. I cringe every time I hear the word “exclusivity” thrown around because exclusivity only matters if there are a great many more people wanting in on the ownership experience. In other words, a low-production watch may be exclusive, but said exclusivity only really matters in its most celebrated meaning if others also care about it. I don’t think the Delma Heritage Chronograph (and literally metric tons of other limited-edition watches the industry is churning out year after year, including many of its biggest brands) will be a highly sought-after piece where such heavy-handed restrictions in production volumes will matter. 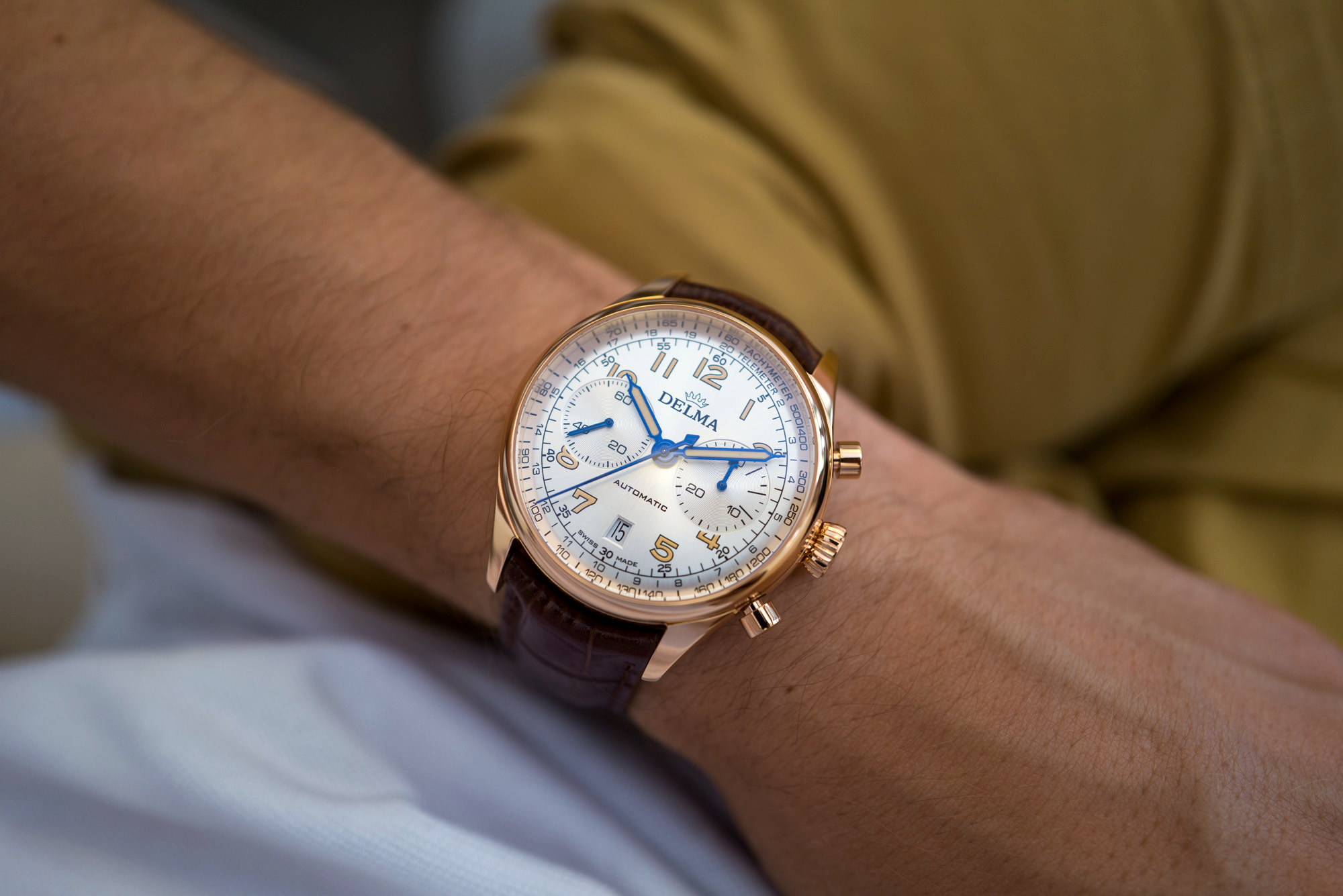 Where it does matter, though, is this feel-good vibe that comes from knowing there only are 74 other watches out there like yours. And that’s cool. Forget about the BS about resale and whether other people care or not, and just celebrate the fact that you own a piece of watchmaking that was created for a limited time. Exercising this level of agility should perhaps be a more common feature among small manufacturers – it’s a game big brands that rule this sub-€3k segment simply cannot play. 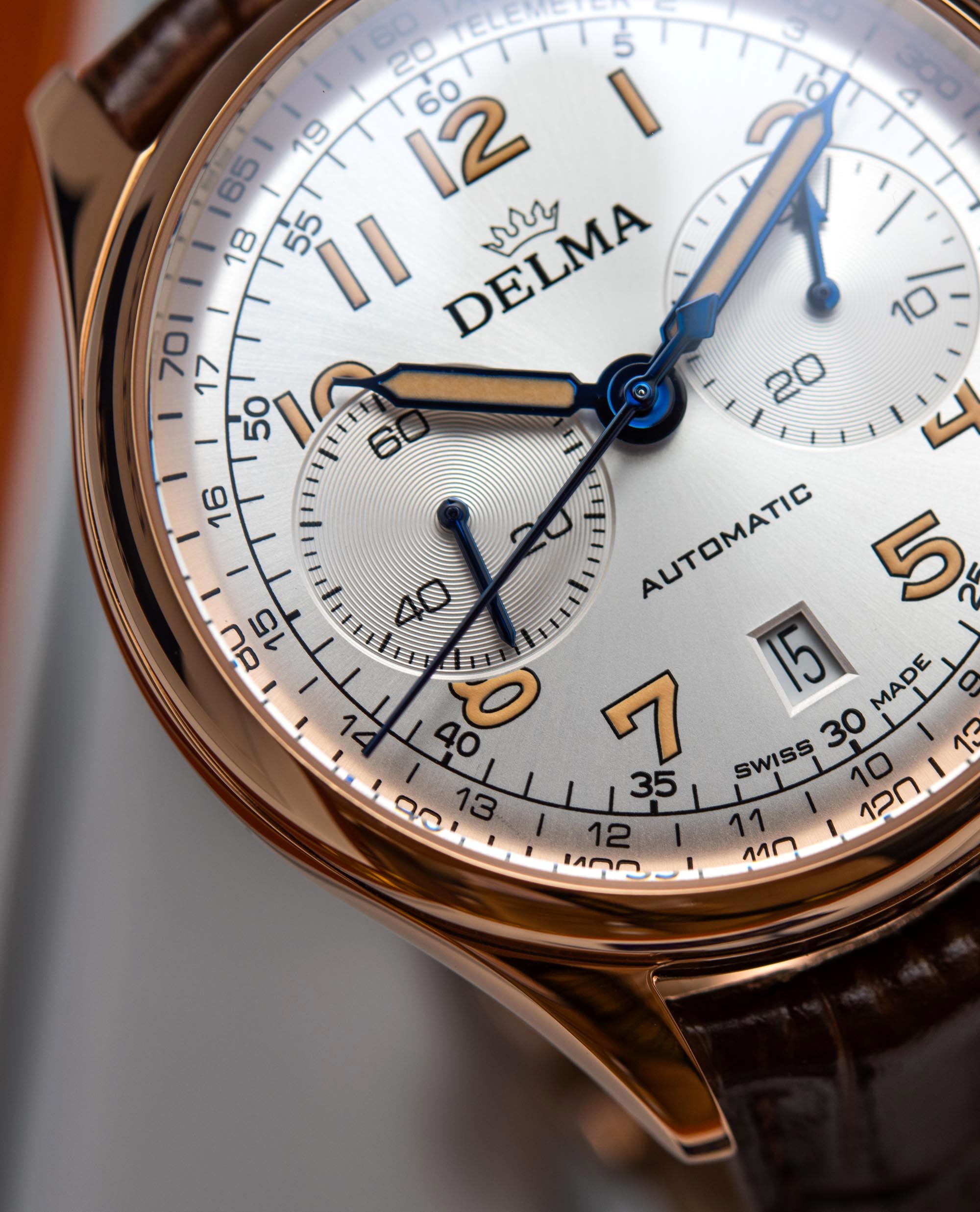 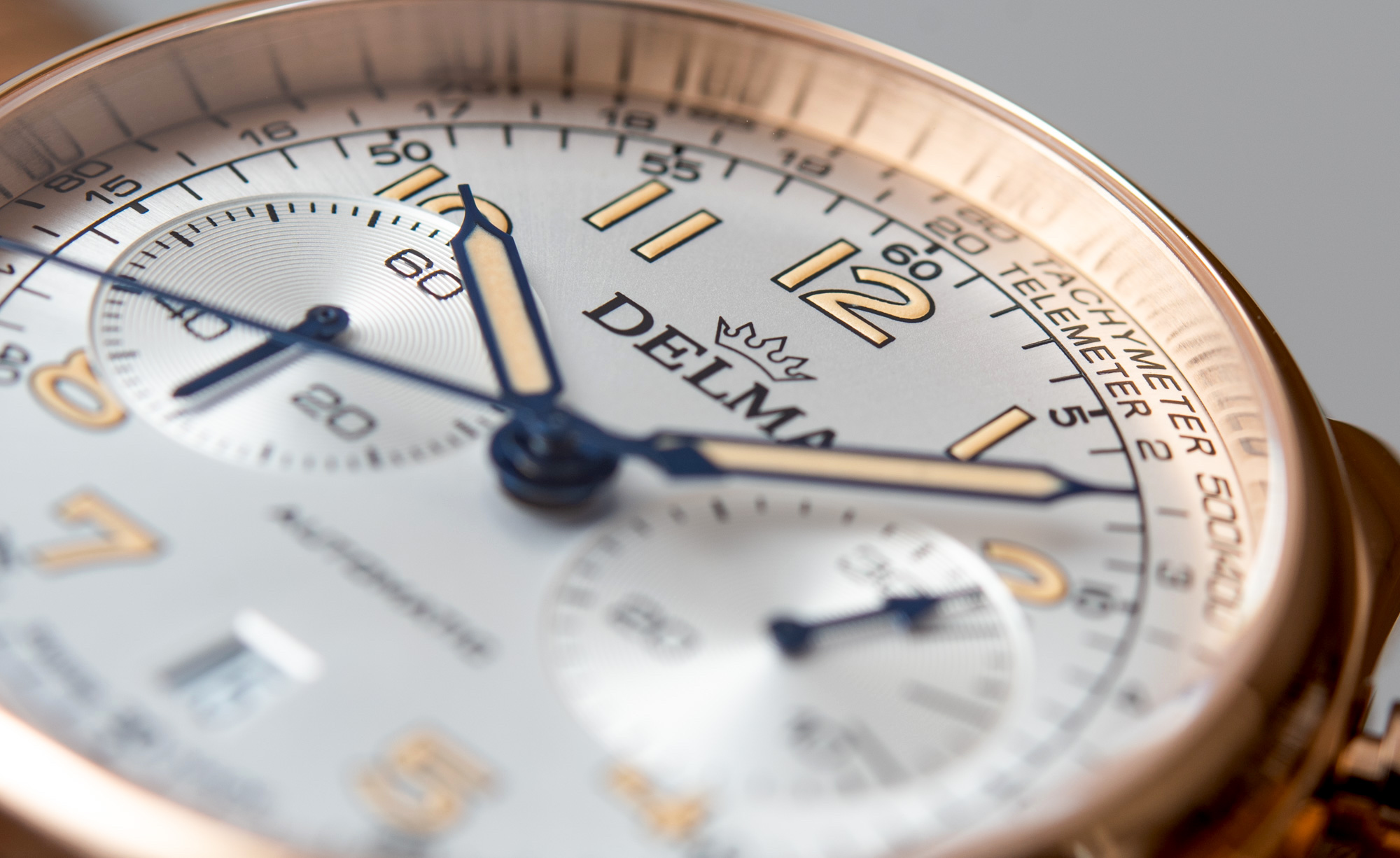 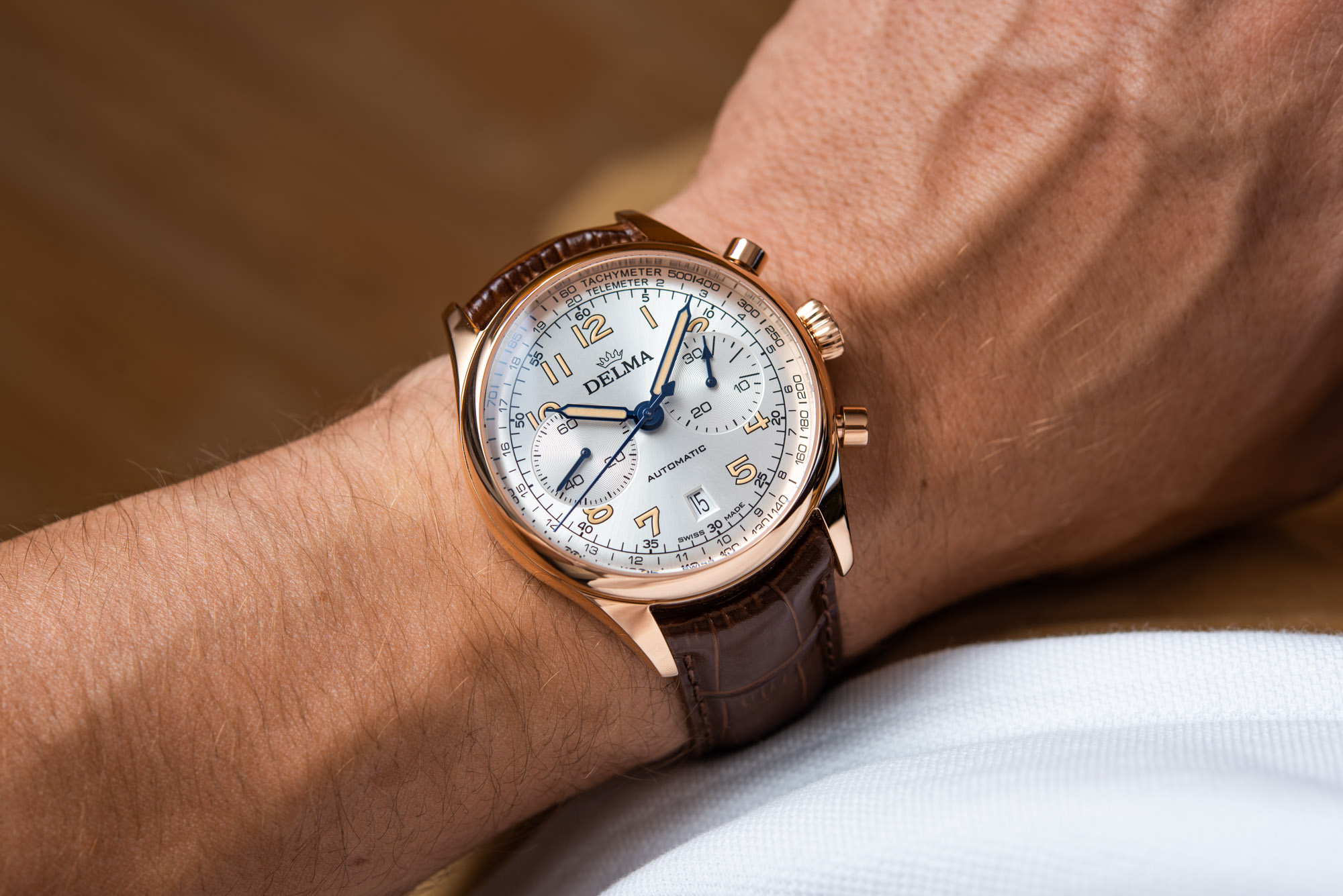 Like many of these quasi-vintage chronographs, the Delma Heritage Chronograph LE looks joyfully elegant on the wrist. There is an air of timeless sensibility matched with a bit of old-school cool that modern watches really tend to struggle with getting right (and that’s coming from someone who’s partial to modern designs). The stacked flange ring from 75 years ago with its stacked tachymeter and telemeter scales scale up (see what I did there?) neatly to this large 43mm diameter. The whole thing looks beautifully proportionate right out of the box, rendering it one of those few “modern vintage” watches that don’t make me want to cry out for an immediate size reduction to 38 or 39 millimeters. The subdials don’t look stupidly tiny or too close to center (again, something even big brands with big egos often get terribly wrong – I’m looking at you, AP). Although many of the hour marker numerals are cut off (a pet peeve of some), that’s a legit vintage design element, as well, also characteristic of the mid-1900s. 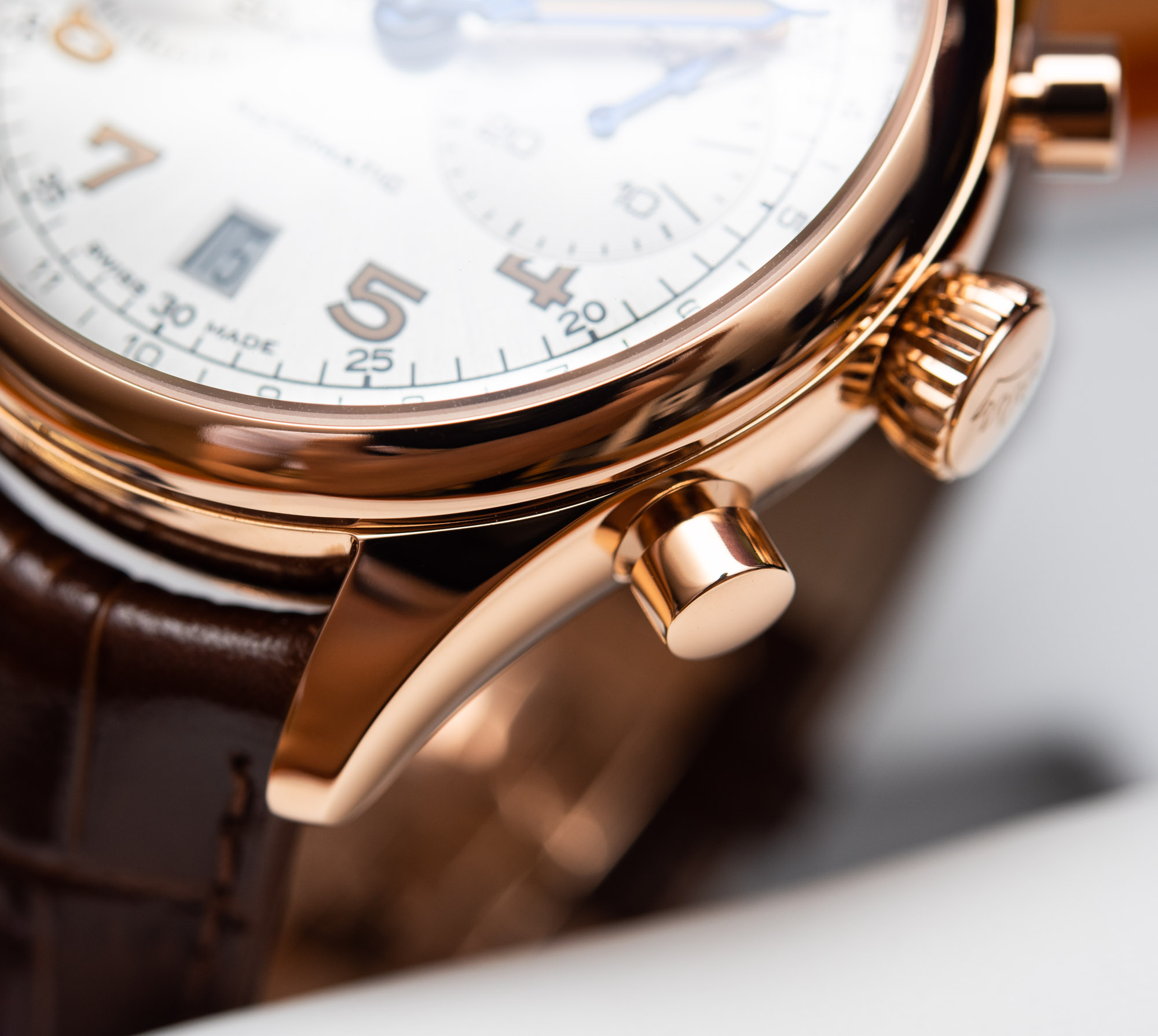 Get closer to this rose gold PVD-coated exterior and you’ll find that a host of rather uninteresting individual parts make up for a likable overall package. There is no fancy bevelling on the lugs, and the pushers are regular piston pushers. (I wonder whether a textured/marked top surface to these pushers and a “Grand Prix”-style strap with large holes in it could have made for a motorsports kind of vibe, but we’ll never know.) Likewise, the bezel is your regular domed affair and everything is all polished; perhaps the onion-ish crown adds a bit of flare. And yet, when you glance down at it, the whole package doesn’t look tame or boring. 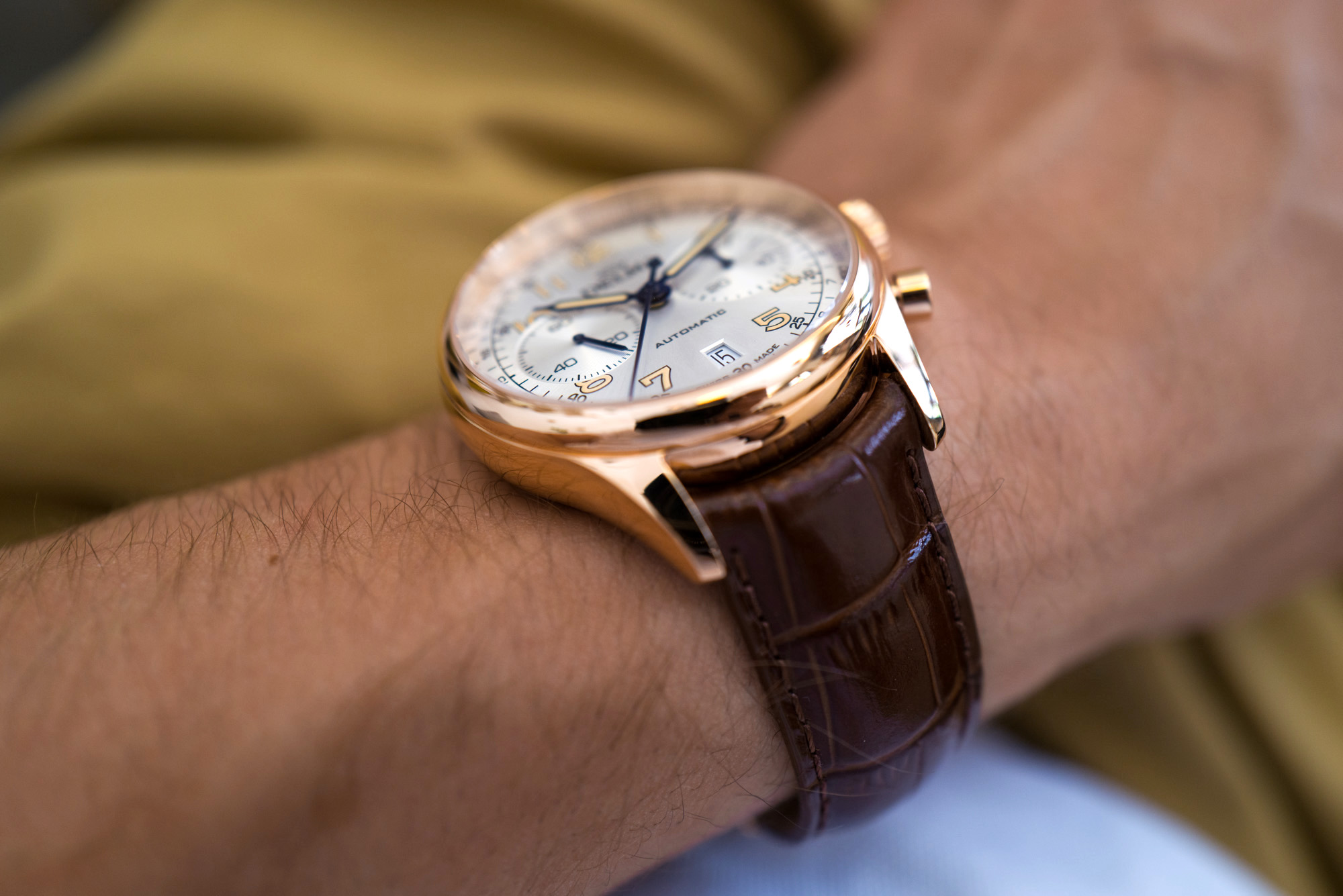 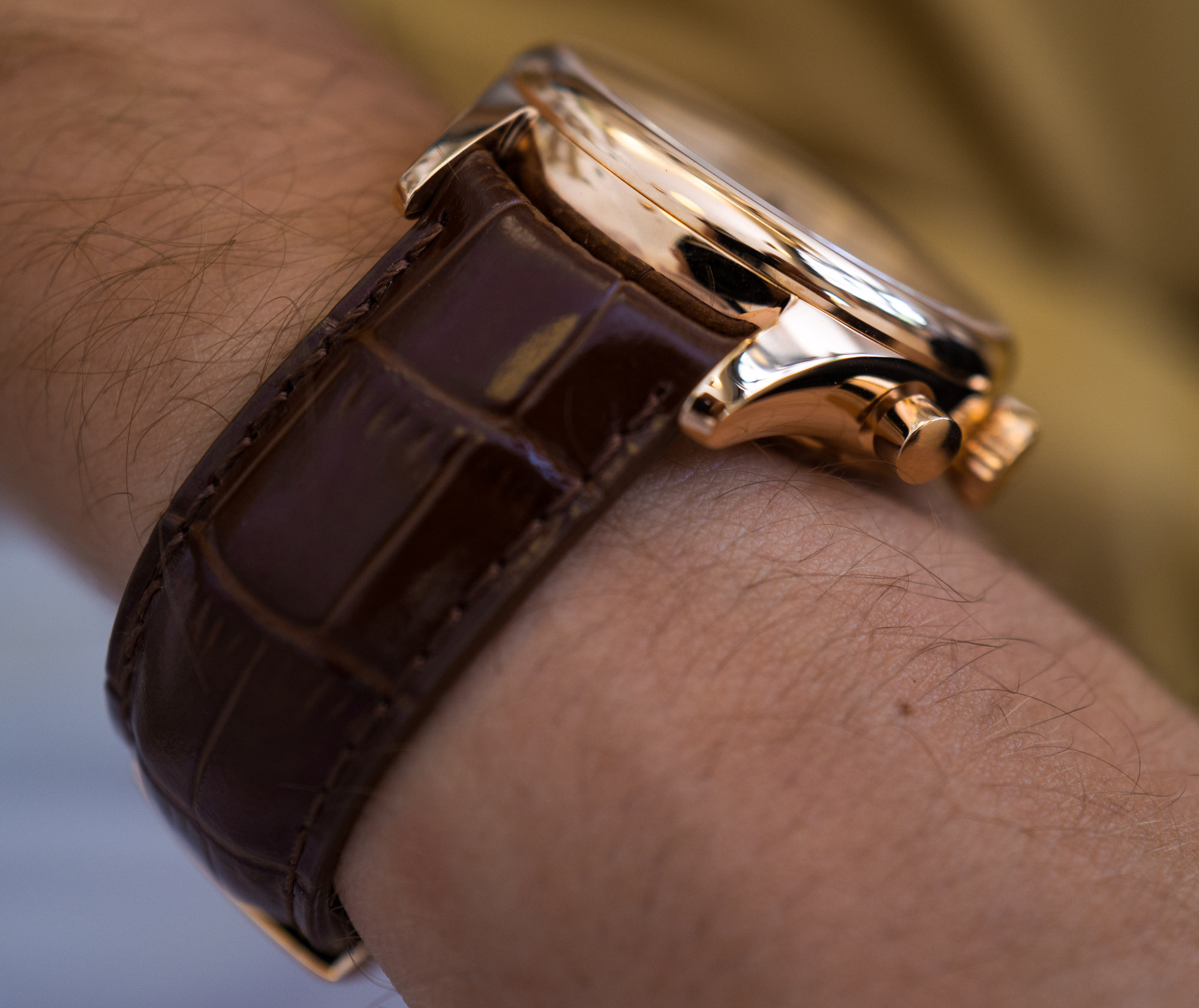 Water-resistant to 10 bars (100-meter equivalent), Delma has engineered a bit of peace of mind into the Heritage Chronograph – they could’ve tried to get away with a measly 30m or 50m rating, but it’s only right that they didn’t. Case thickness is 15.7mm, as is normal for a 7750/SW510-equipped chronograph. This time, there is no witchcraft going on with a thin bezel and a heavily domed crystal; in fact, it’s the other way around. The domed bezel reaches all the way to the top of the crystal which, in turn, is flat. This could make for a hockey puck aesthetic, but somehow (perhaps also due to the enlarged 43mm diameter) things look tolerable even when viewed from the side, traditionally the least preferable angle of these stout 7750/SW510-equipped watches. 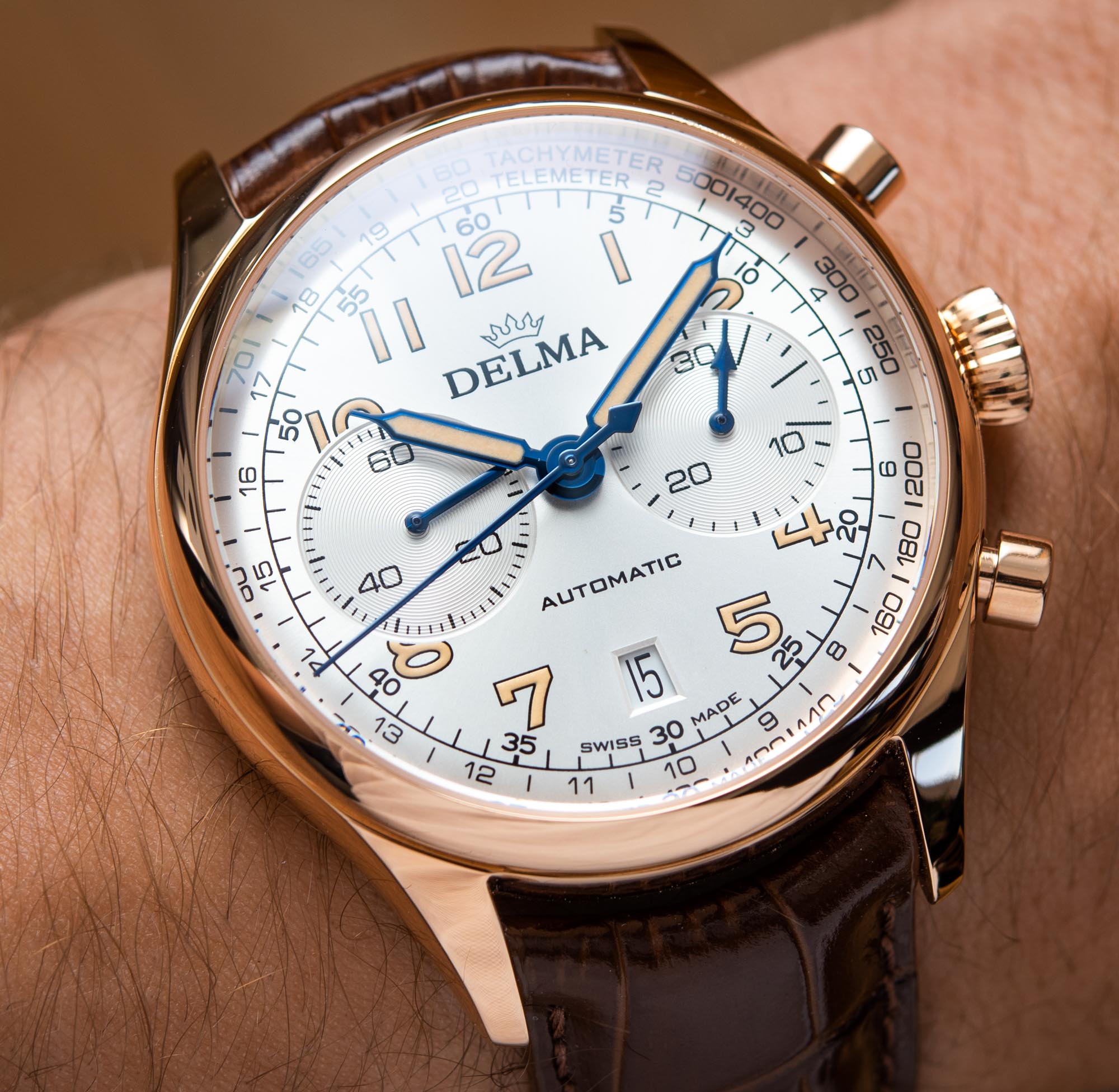 On the wrist, the Delma Heritage Chronograph LE feels and looks expensive – apart from the strap, but more on that later. It’s a fun exercise for us watch lovers to reflect back on the rather baffling discrepancy between expensive-looking watches and watches that are just… expensive. You and I sure know which of the competitively tame stainless steel watches fetch prices deep into the five-figure segment – but rock said watches out in the real world, and your non-watch-savvy colleagues and friends will rightfully think you may not be as well off as you once were for they wouldn’t dare to imagine a regular production steel watch could fetch so much money. Sure, if stealth wealth is your game, then this is all for the better, but I’m sure many of us know more than a handful of amateur-ish watch buyers who have spent a pretty penny on mighty expensive watches only to learn that the folks they were respectively trying to impress haven’t had the first idea about what they were wearing and how eye-wateringly costly said watches were. 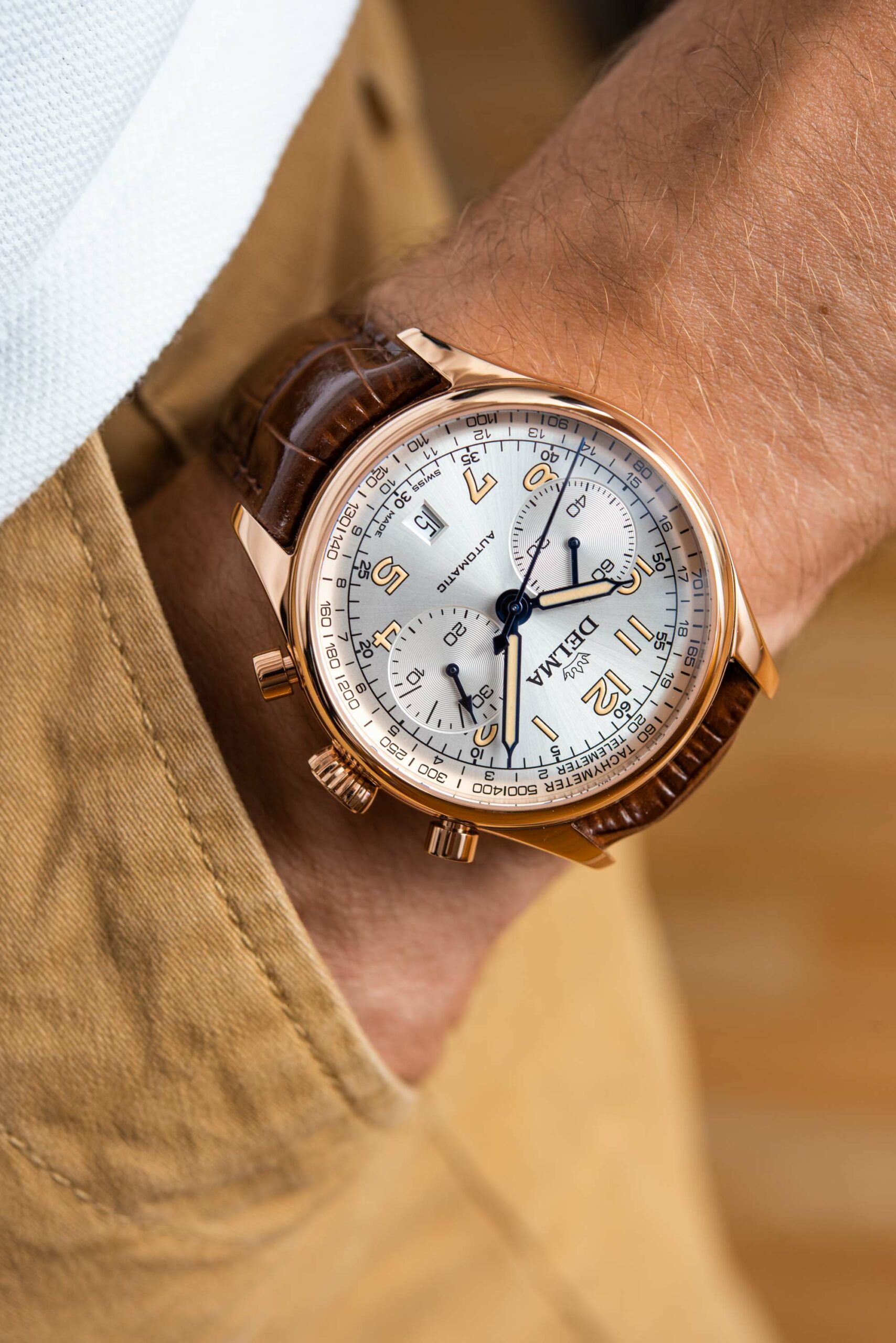 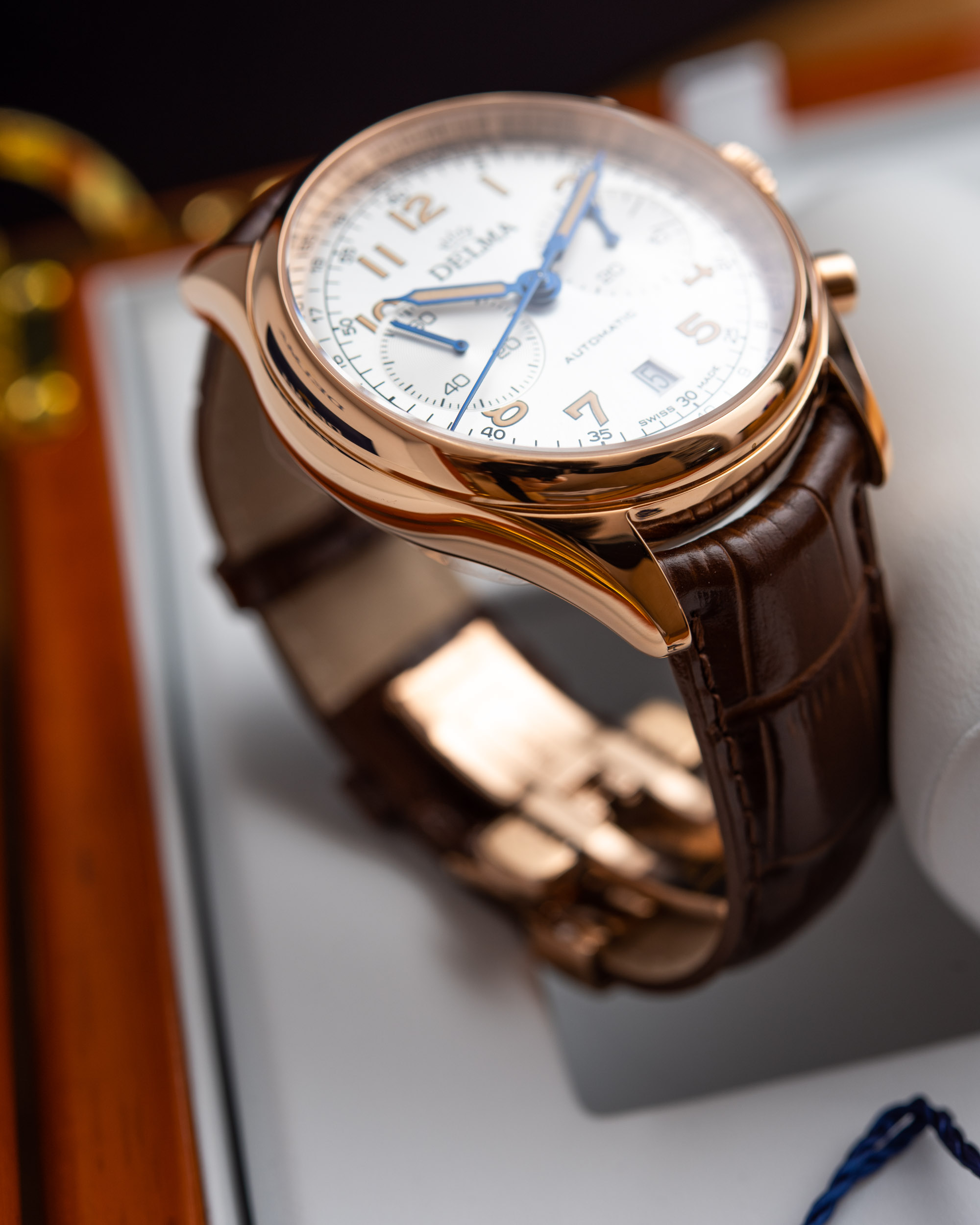 By contrast, some watches, including this 2,700-Euro gold-coated chronograph, look easily a few times more expensive than their price tag for the untrained. I love to test this occasionally with friends and family: Stretch out my arm and show the watch from a step or two away and ask what they reckon it cost. Spoiler alert: People have no clue about the difference between a solid 18k-gold and gold-coated watch. Sure, if you wear a gold-coated watch with knackered clothes and treat it poorly, then people will probably sense it wasn’t that expensive. Wear it with pride and with a proper outfit, and you’ll soon experience the opposite effect. 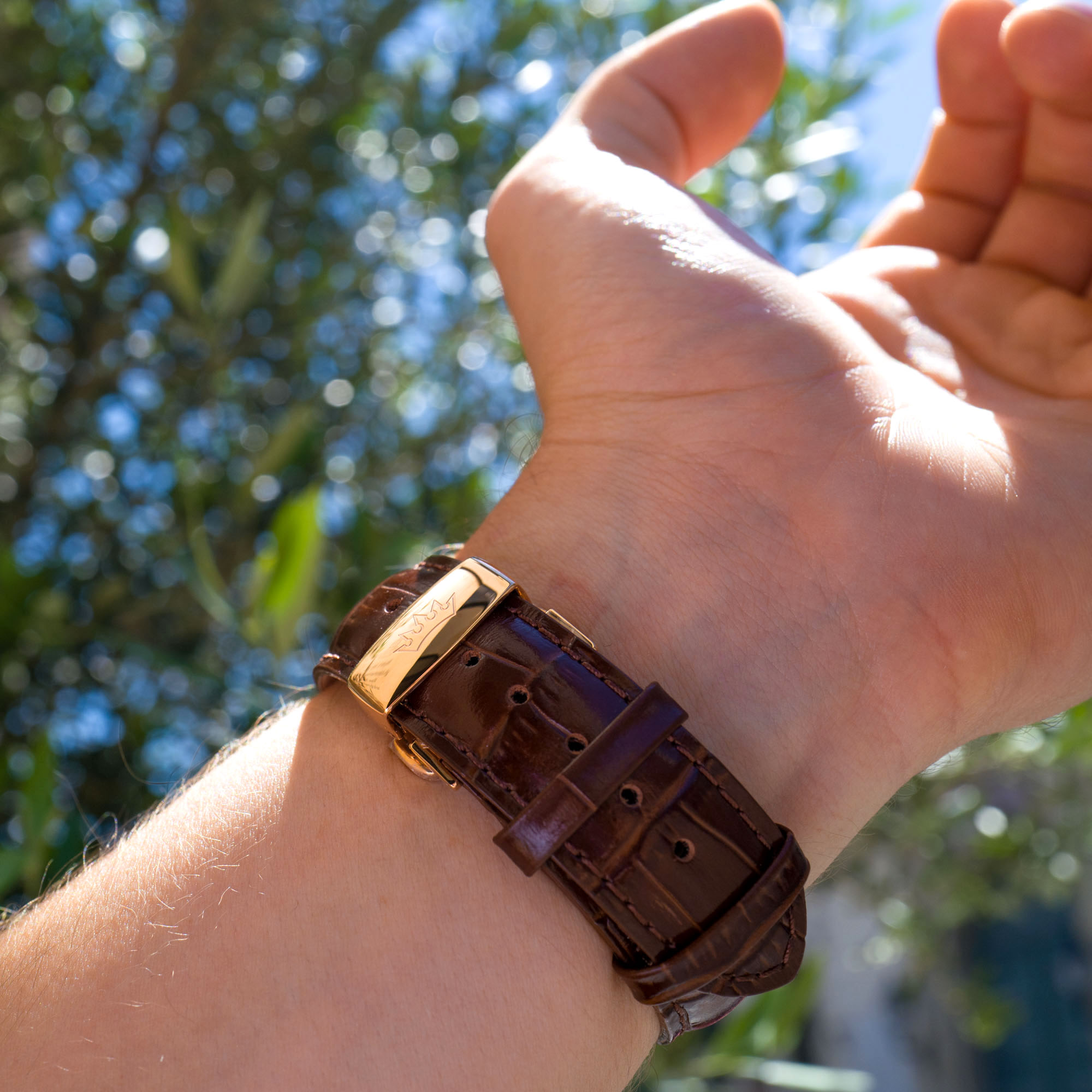 Anything I didn’t like? I understand that strict regulations in California and other places have, for years, either entirely banned or painfully complicated the sale of watches (and other products) with alligator leather components, and so I am sympathetic to brands trying to find alternative solutions. That said, while this alligator-pattern genuine leather strap that Delma used looked expensive to many of my test subjects, to the touch, its lacquer-like surface just doesn’t feel good enough. I still haven’t quite reached the climax of my crusade against deployant clasps, either; while this double-folding affair closes with a reassuring click and opens with double pushers, I simply have not ever once worn a watch with this specific OEM clasp that didn’t press against the inside of my wrist painfully. I’d much rather take a higher-end strap on a tang buckle. That said, regular customers are not only known to prefer a deployant clasp (just look at the supply of watches equipped with these to get an idea of the demand), but I also find it not much of a stretch to say that the average customer will not be able to tell apart a lacquer-like embossed leather strap from a genuine alligator strap unless the latter is from the extremely high end of the spectrum. Still, priced at €2,700, there still is plenty left of a €3,000 budget to spend on a high-end strap that will transform the Delma Heritage Chronograph LE. — as it will any other watch in this segment, make no mistake. 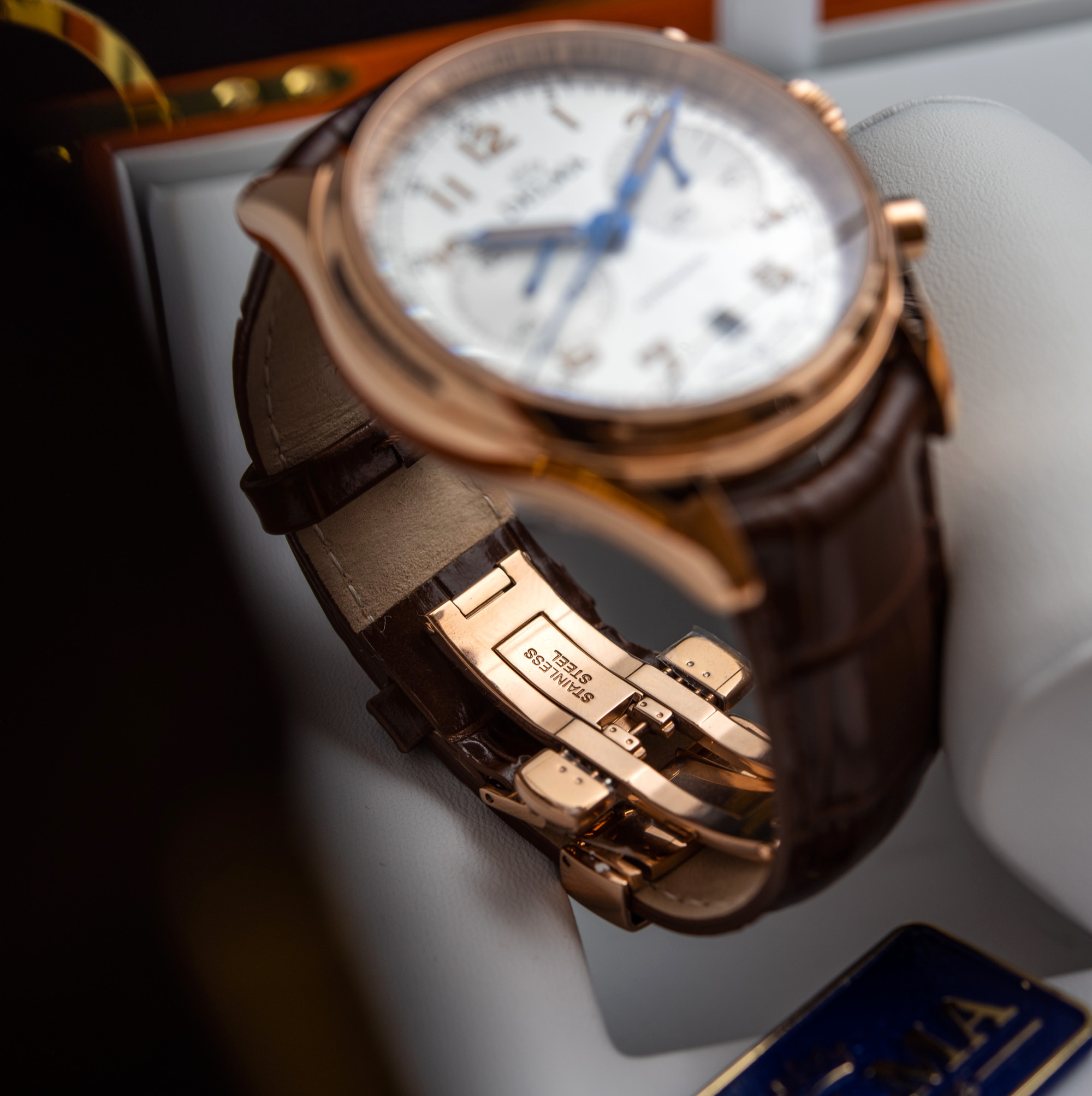 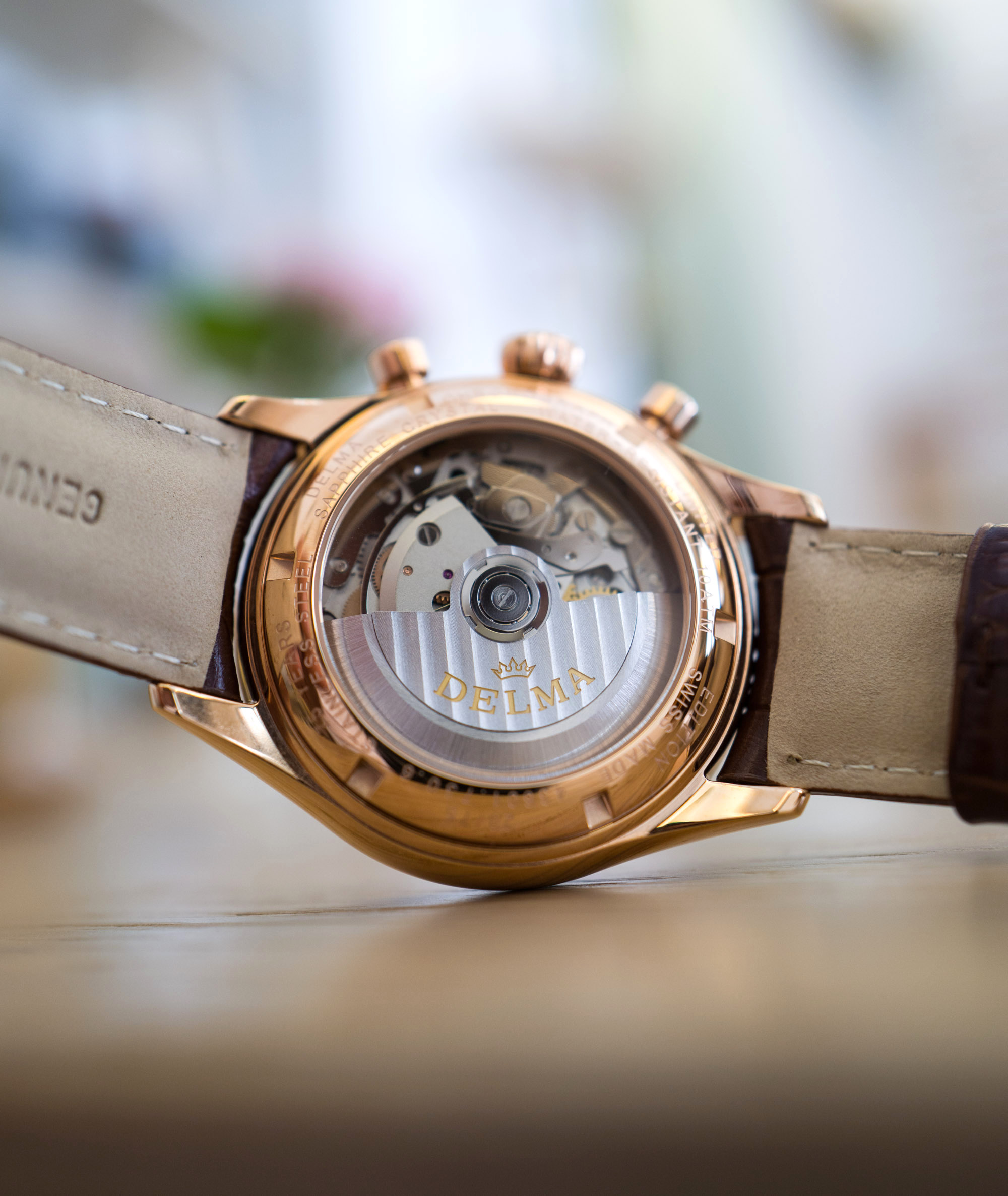 Enjoying that aforementioned 100m WR protection is the Sellita SW510, a popular alternative to the ETA/Valjoux 7750 that it was designed to replace when ETA walked away from non-Swatch Group (& friends) brands and stopped supplying them with 7750s. As such, the SW510 offers 48 hours of power reserve combined with a preferable 4 Hertz operating frequency and combines these with a decent enough caseback view. 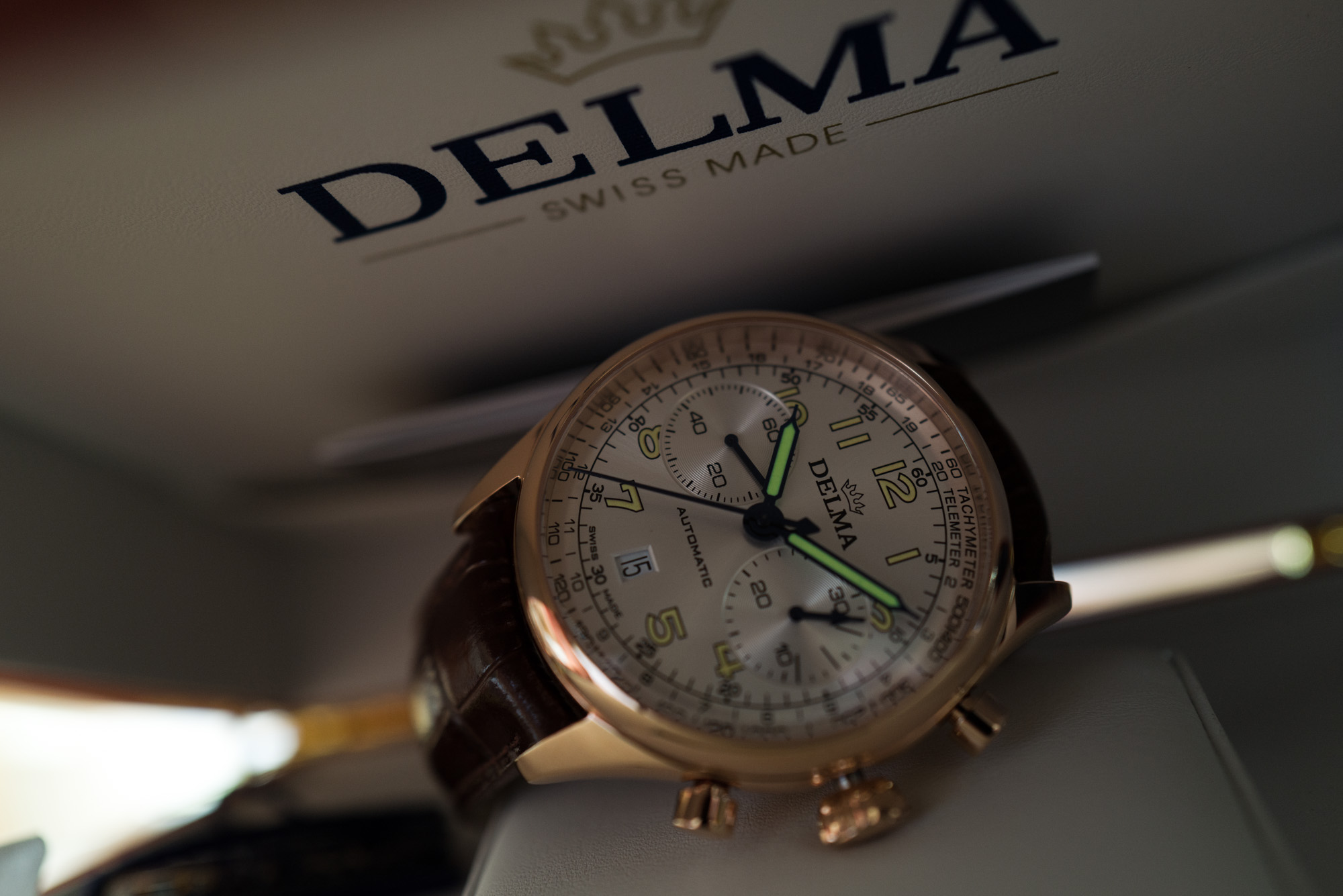 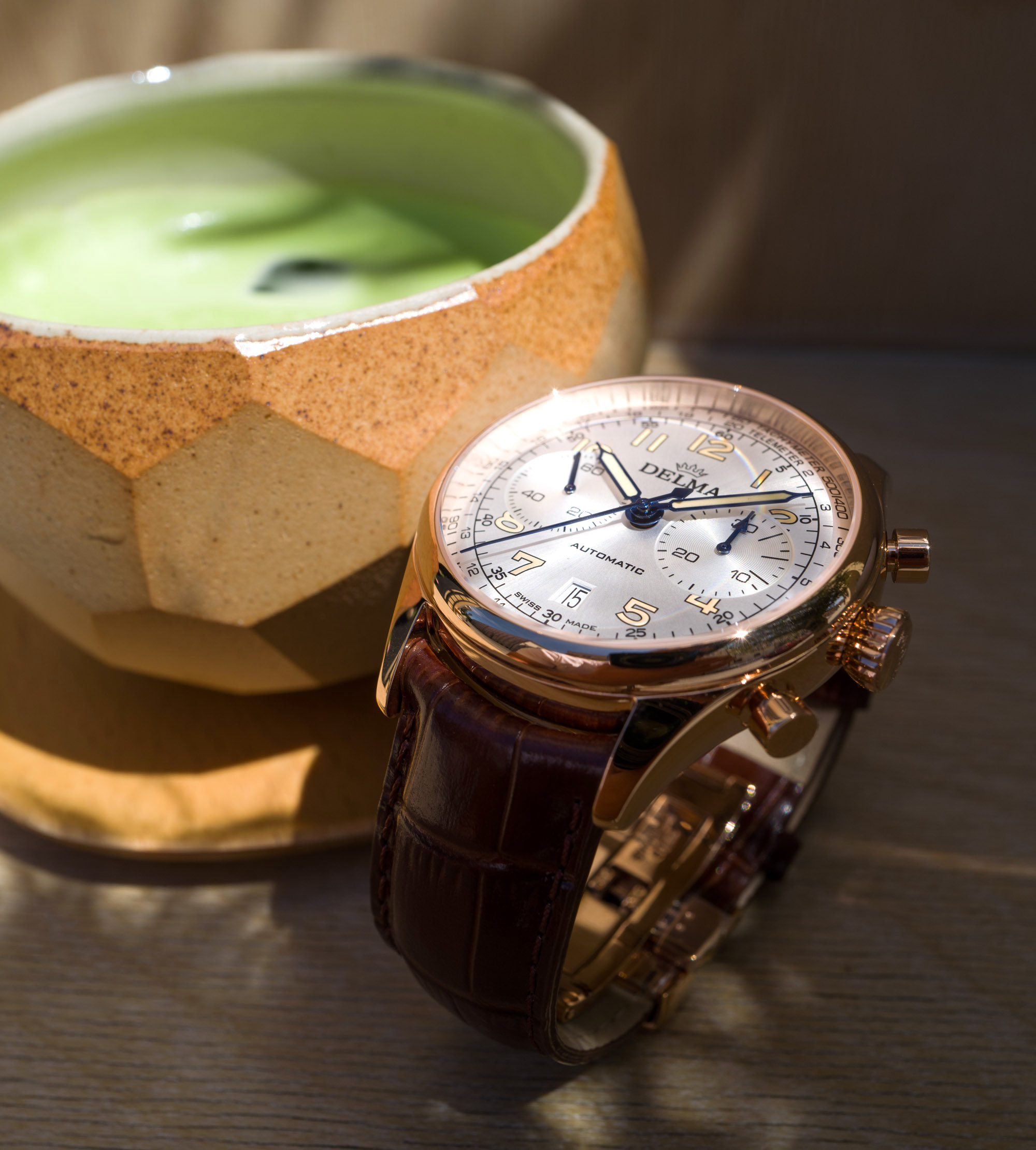 In summary, the Delma Heritage Chronograph is a well-made, good-looking wristwatch with a deeply likable overall vibe. It’s precisely the sort of design that I reckon will do very well because it dresses up and down with great agility, is characterful without trying way too hard at this vintage game, and ages well over time – should you exercise enough care to protect the gold coating.

The OEM strap is good enough until it wears off, I’ll give it that, but then it’s time to get a proper ‘gator and bump this piece yet further up the “expensive looks” chart. Homework done well, the Delma Heritage Chronograph LE is priced at €2,700 / $2,850 in rose gold or yellow gold-coated versions and at €2,600 in the pure stainless steel variant. All three versions are limited to 75 pieces each. You can learn more at the brand’s website.