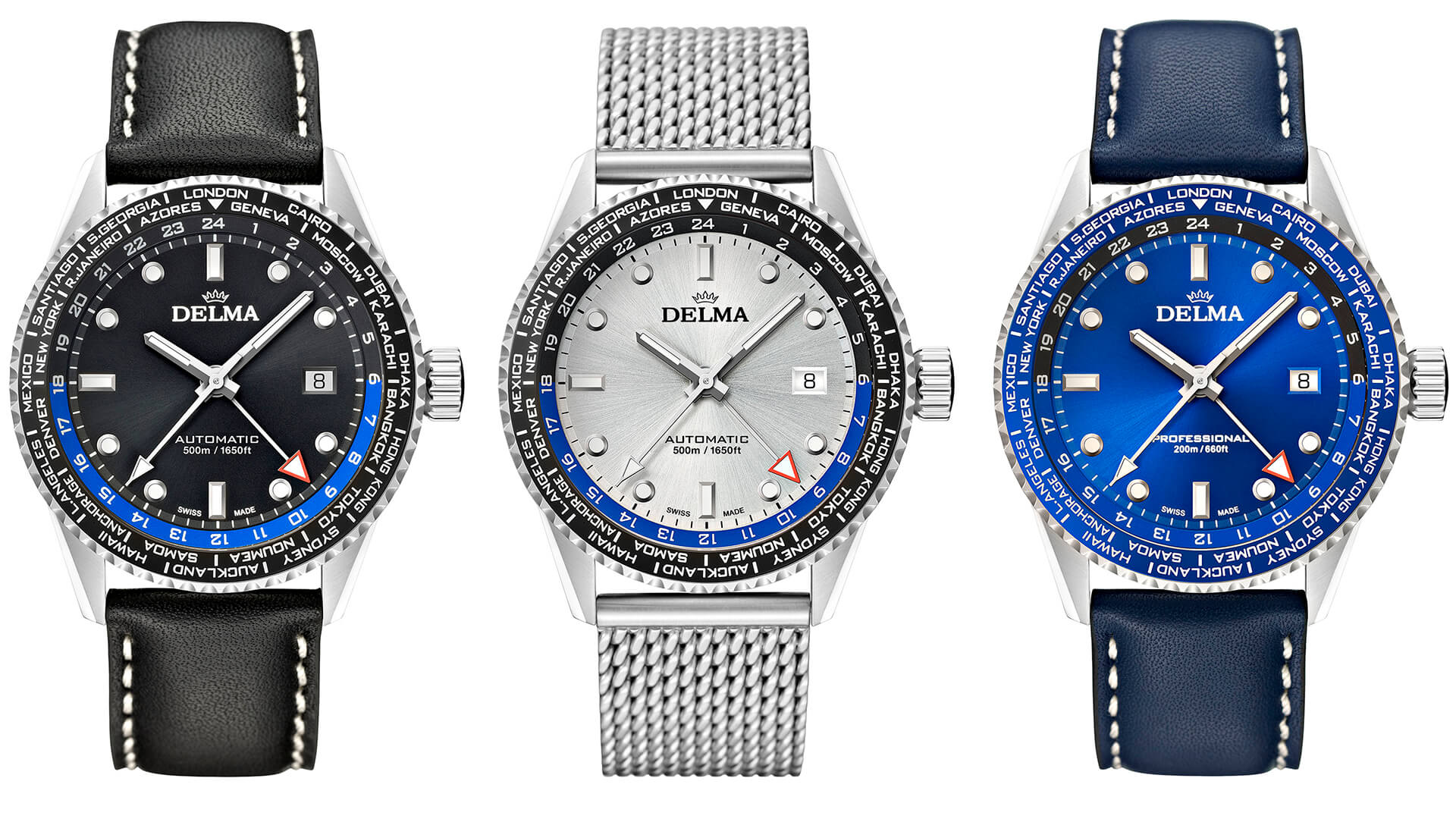 Despite its under the radar reputation with most enthusiasts, Delma has produced an impressive string of sports watches in the past few years, catering especially to the serious dive watch fan. For its latest release, however, the brand has reimagined its vintage styled Cayman diver line into a series of capable world time models. This new Delma Cayman Worldtimer offers buyers a charmingly ‘70s-inflected take on the complication with the option of either an automatic or quartz movement at dramatically different price points. 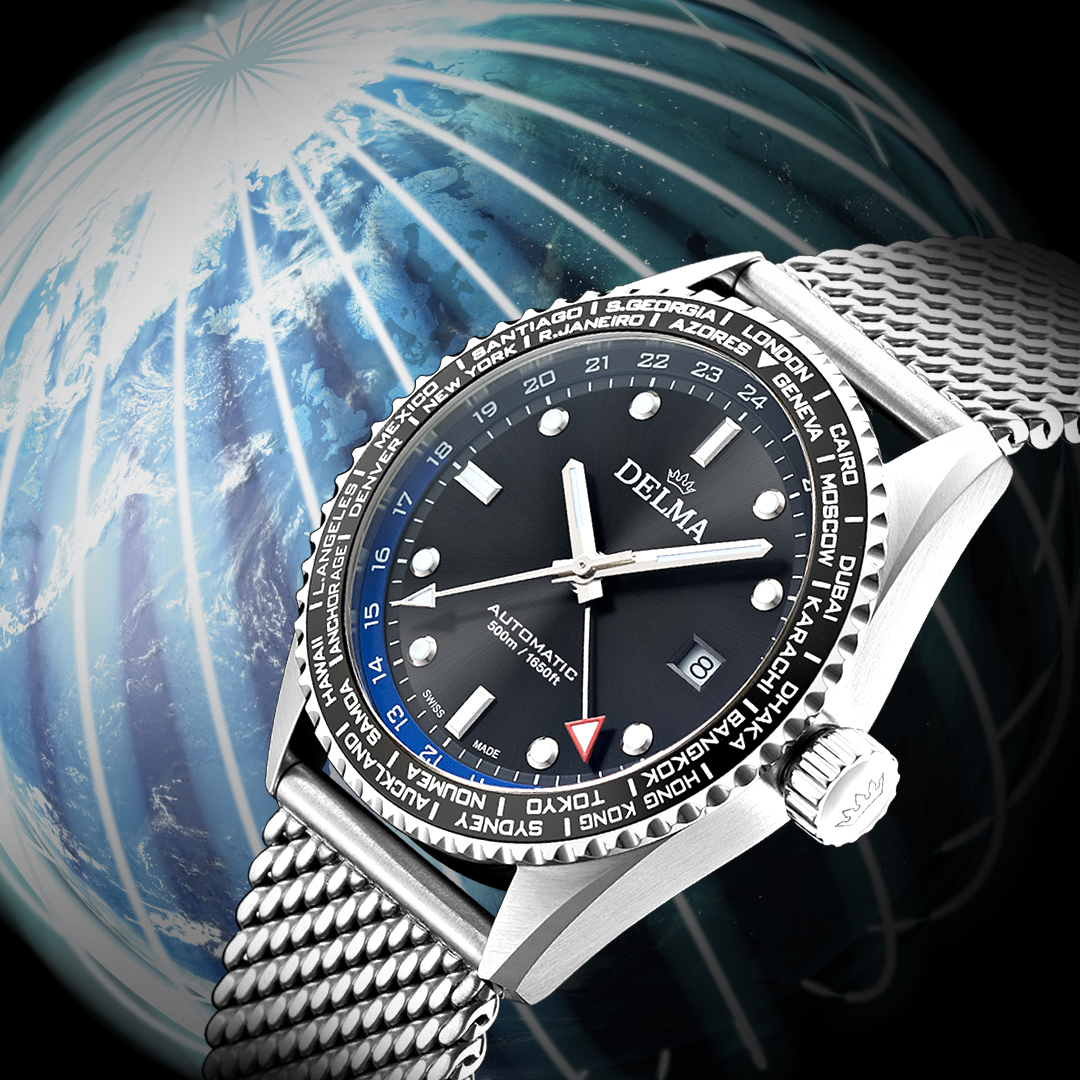 The 42 mm stainless steel case of the Delma Cayman Worldtimer is classically sporty in form, with wide set athletic lugs accented with a polished chamfer that tapers away from the main case. The bidirectional aluminum bezel opts for a suitably old school font for each of its 24 listed cities across all time zones, while the large unguarded pillbox crown helps to sell the vintage illusion. There’s a surprising amount of variance between the automatic and quartz versions of this case, however. There’s a noticeable difference in wrist presence between the 11 mm thick quartz case and the substantially beefier 13.6 mm version for automatic models, and automatics are further differentiated by the addition of a sapphire display caseback. Even more unusual is the serious difference in water resistance between the two. The quartz model boasts a respectable 200 meters of resistance, but the 500 meter rating of the automatic is made all the more impressive when that display caseback is factored in. 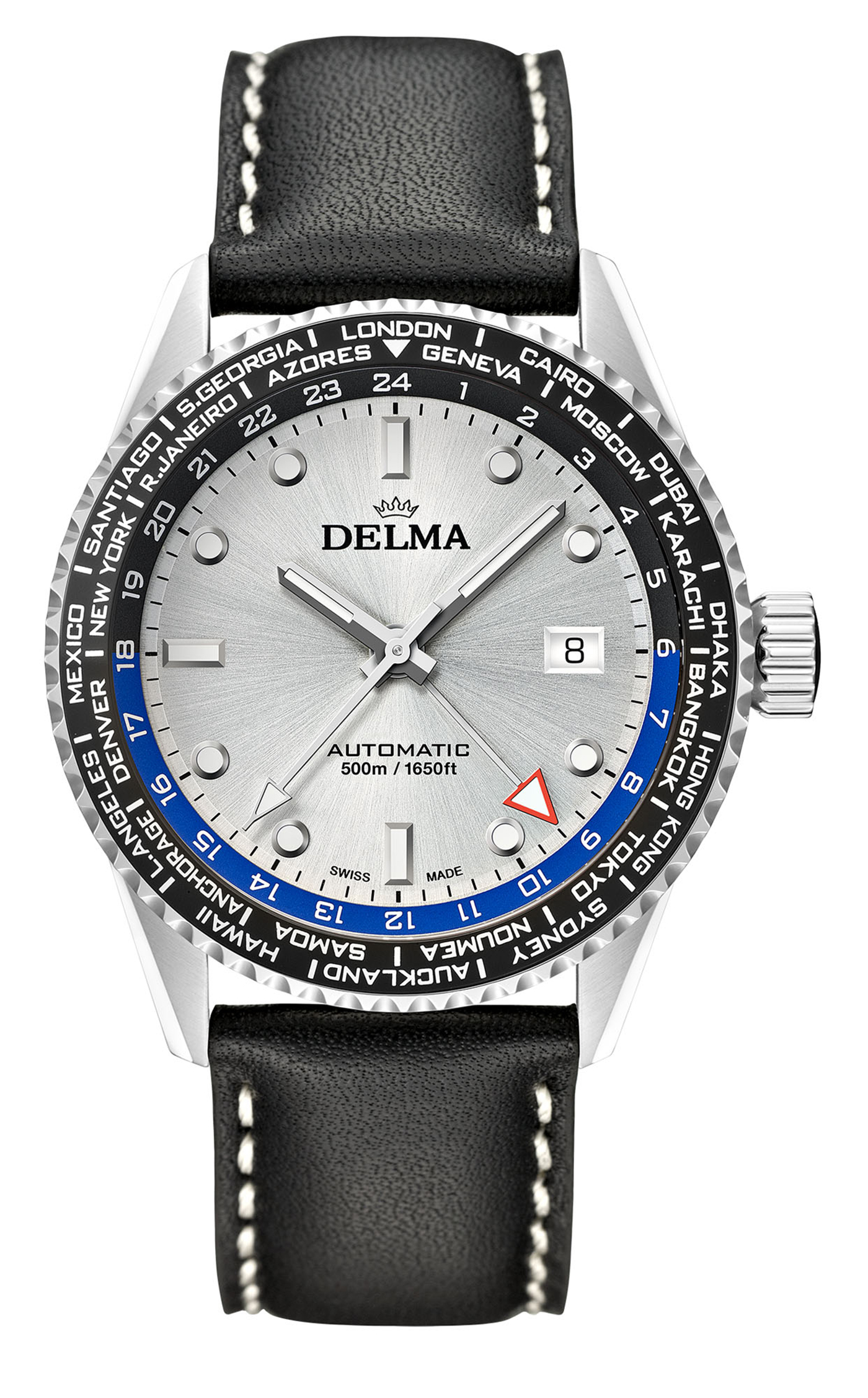 Like the case, the dial of the Delma Cayman Worldtimer feels less like a modern reissue and more like a vintage watch that’s been kept in new old stock condition. There’s a charmingly simple quality to its approach to a vintage styled design here, particularly in more colorful dial variants. All three dial versions start with a set of lumed pointed baton hands coupled to a classic diver mix of applied circular and rectangular indices, accented with the bright red lumed arrow tip of the GMT hand. The 24 hour chapter ring is divided into black and blue day and night zones, adding a flash of color to the dial and allowing for easy legibility. What may be a bit too legible, however, is the 12 o’clock printed logo, which sits just large enough on the dial to disrupt the overall visual weight. The three dial colors available each lend a different personality to the dial. The sunburst black model feels the most modern and subdued, and no doubt would be the most versatile member of the bunch. The sunburst royal blue, on the other hand, feels summery and far more playful. It’s the silver sunburst dial, however, that looks to be the real eye catcher, with an unorthodox color palette that works well with the simple overall form. 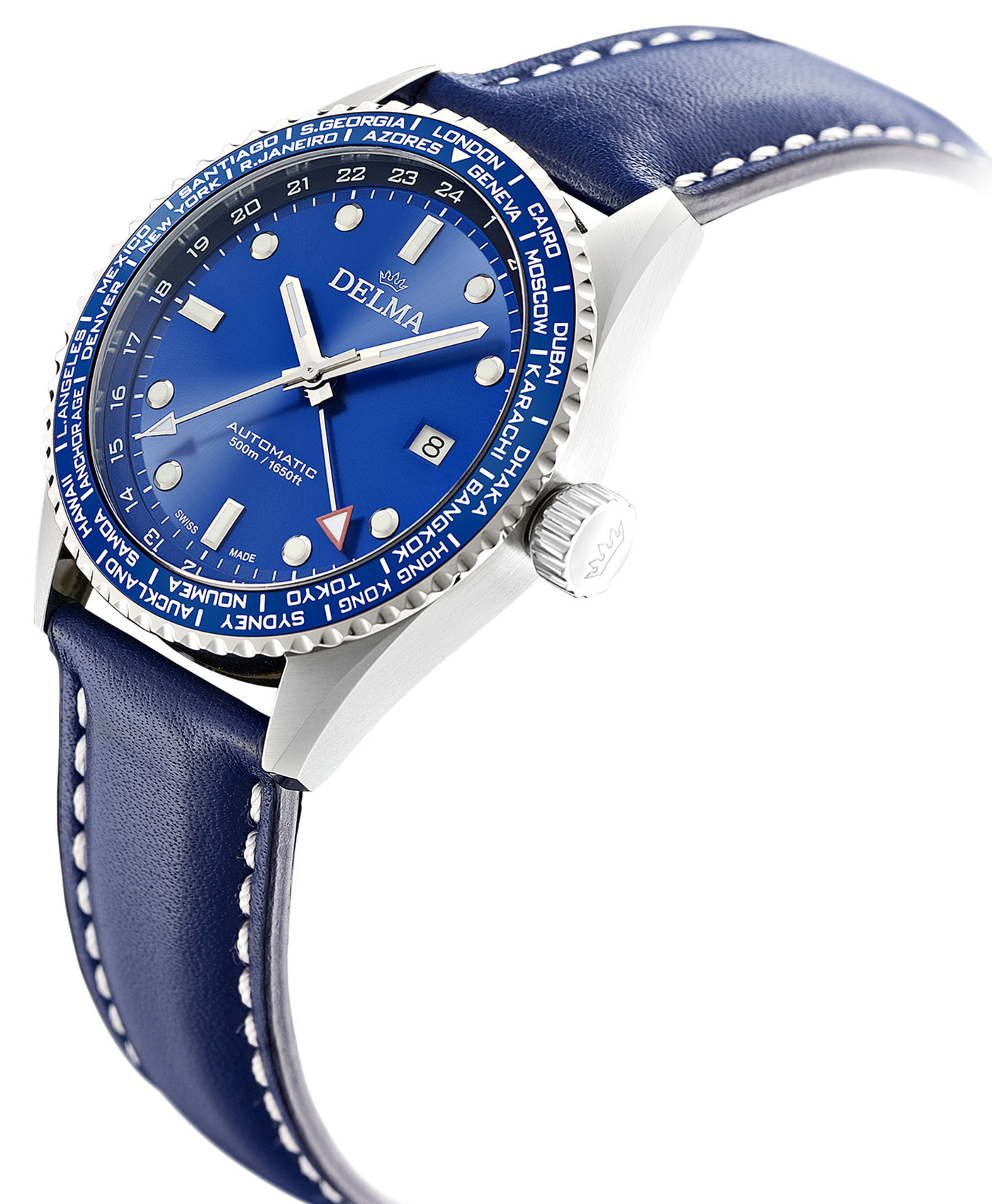 Delma offers two distinct movement options for the Cayman Worldtimer. The first is a Ronda 515.24H Swiss quartz movement, providing reliable and affordable performance. For those looking for a mechanical movement, the Cayman Worldtimer can also be equipped with the ETA 2893 automatic GMT movement. This is a 24 hour GMT, offering time zone adjustment separate from movement hacking along with a 50 hour power reserve. Delma finishes this movement off with a custom signed rotor. 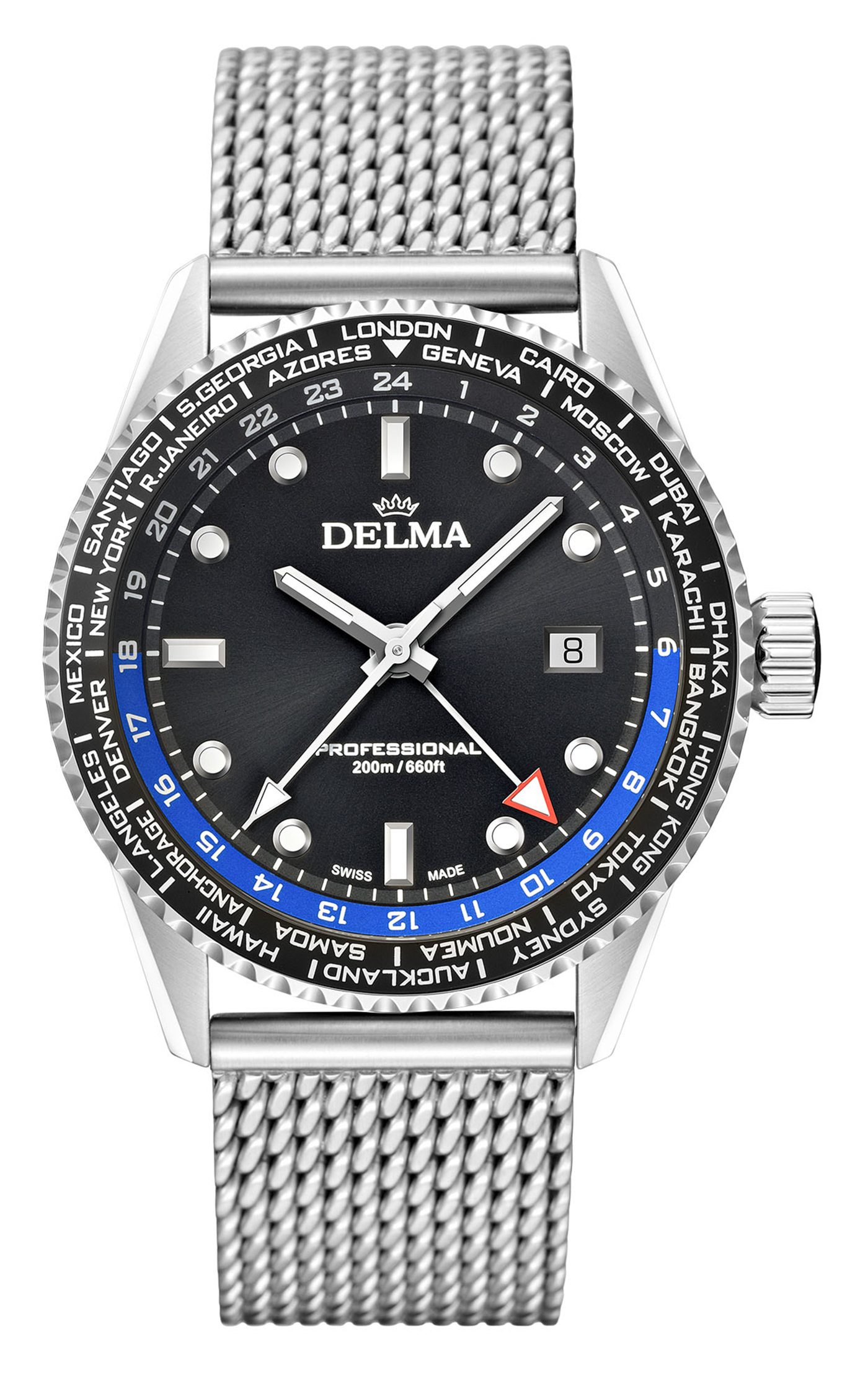 The Delma Cayman Worldtimer is available with either a Milanese mesh bracelet with folding clasp, or a leather strap complementing the dial color and finished with white contrast stitching. Both options offer solid daily versatility, but the Milanese mesh adds an extra dose of vintage flair to an already charismatic package. 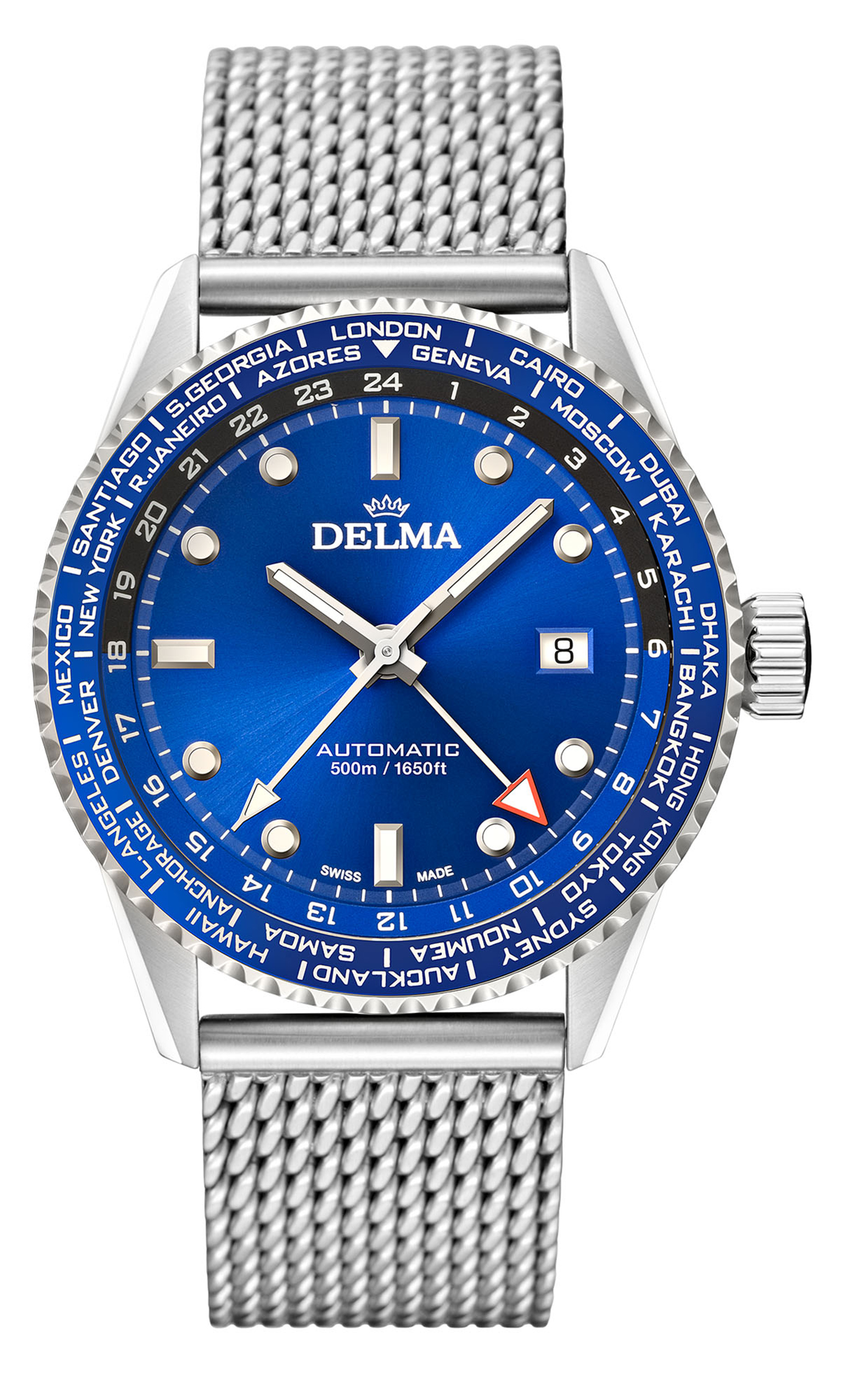 With the Cayman Worldtimer, Delma has expanded the relatively young Cayman line into fresh territory with a charismatic series of offerings. The Delma Cayman Worldtimer is available now from authorized dealers at a starting MSRP of $650 for quartz models and $2,190 for automatic versions. For more information, please visit the brand’s website.