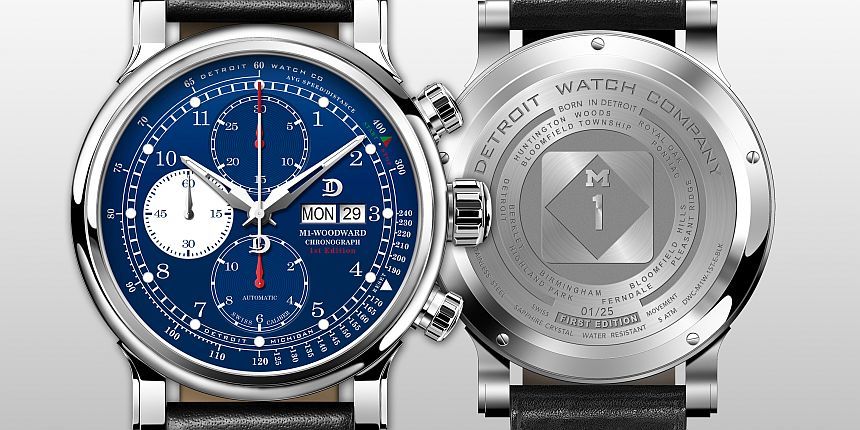 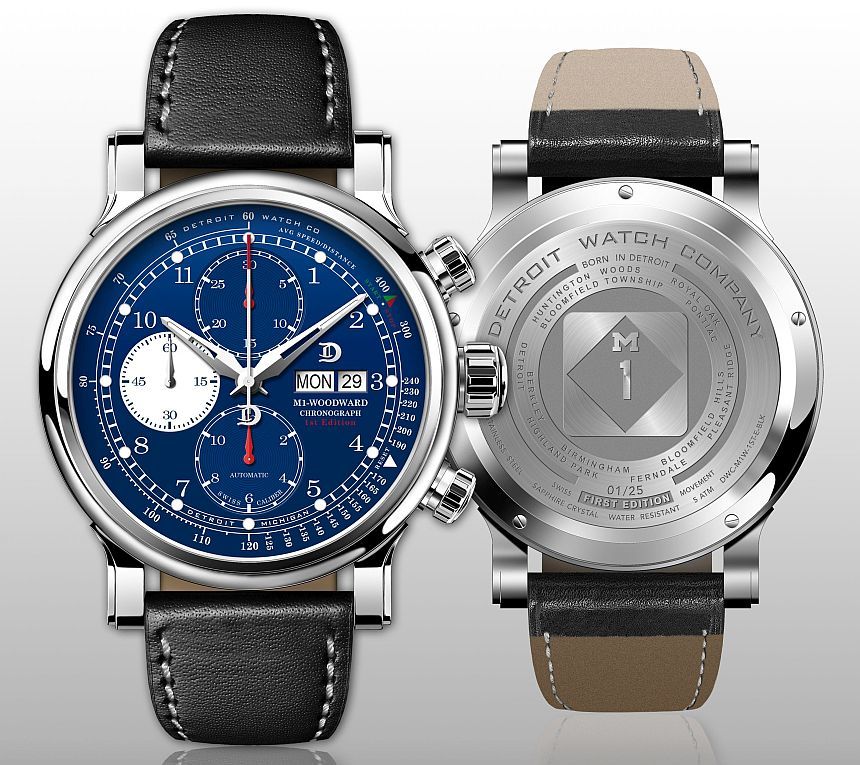 As I mentioned in my prior Detroit Watch Company review, I have a soft spot for items coming out of my former hometown. While that first watch dove pretty deeply into the history of Detroit for a connection, their latest has something most current (and former) residents of the area should be familiar with. No, it’s not the giant tire along I-94 – it’s good ol’ Woodward Avenue. From that street, we have the Detroit Watch Company M1 Chronograph.

Of course, tying a watch to a road is a tricky proposition. Realistically, it’s a clever way to name a new model: just focus in on a prominent landmark, and then go from there. Of course, we have the M1 “road sign” showing up on the case back, as well as the list of cities that the road passes through. As to the watch itself, there is a connection I see in the selection of a chronograph. 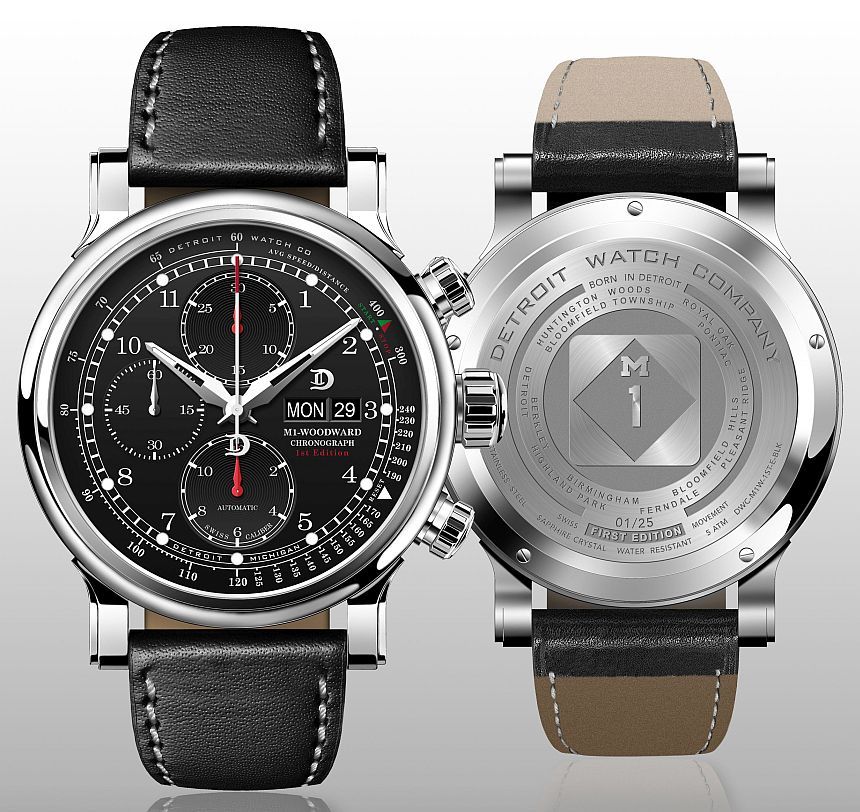 For those unfamiliar with Woodward Avenue, it is one of the major roads to go cruising on (you can check out more history here). If you read into the history of the thoroughfare, this is something it’s been for quite a long time – a place for people to show off their cars (as we have these days, with the massive Woodward Dream Cruise) or even to race (not so much these days, but definitely in it’s past). This is where a chronograph can claim a connection – have to time those speed runs somehow while you’re flying low on the M1, don’t you?

The watch itself continues the design language that we have seen on prior models (which makes sense since the company is led by two designers), with similar fonts and case shapes, and even the identical handsets from the Pride of Detroit Aviator. This is one thing I wish they had played with a bit on the Detroit Watch Company M1 Chronograph. Yes, it’s a clever play on a fountain pen nib, but if they extended the lumed insert for the full length of the cutout, visibility would be much improved. Fortunately, at least on the darker dial options, the handset stands out pretty crisply. 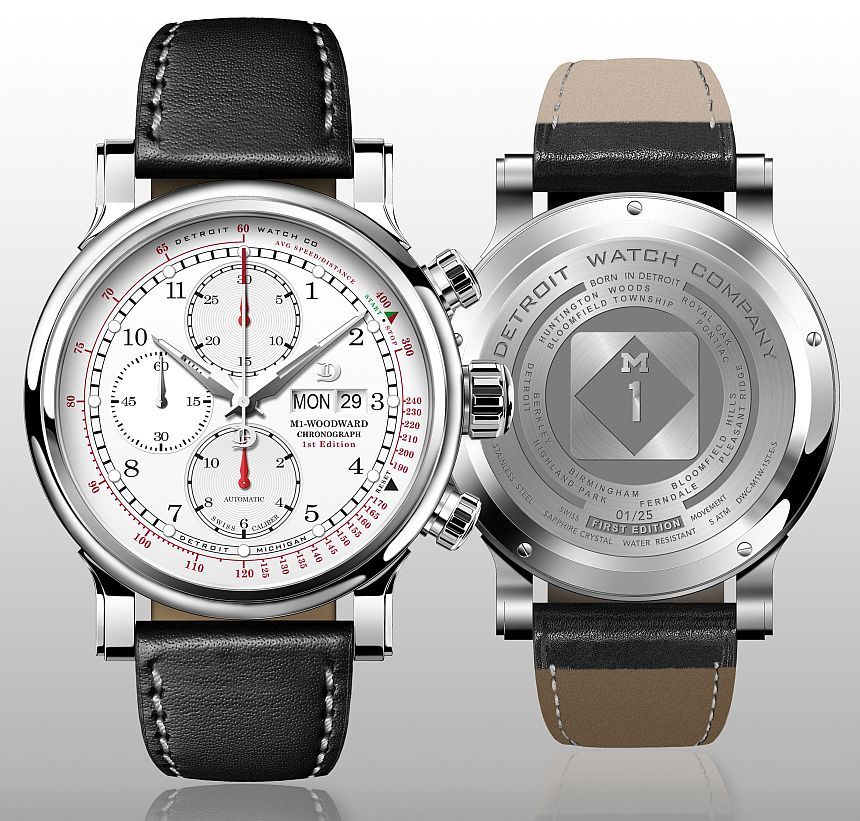 In terms of what is on the dial for this new model, everything makes sense for a chronograph. All of the relevant scales are there for timing things using the SW500 movement. We even have color-matched date wheels for two of the dials! On the blue dial, they opted for the white date wheels, which plays off of the white sub-seconds dial, so it’s works a bit better.

Pre-orders for the Detroit Watch Company M1 Chronograph start up on July 1, 2015, for the first 25 pieces of each color (so, 75 total). For your pre-order, you’ll put down the full price of $1,850, and you will get your choice of serial number from what has not been claimed. Production on these limited edition versions will kick off in August. Then, when the watch returns in the fall, the “First Edition” text will be gone, and the serial numbers will start at 26. So, if you’re the sort to go cruising the summer streets (and like some exclusivity), then the Detroit Watch Company M1 Chronograph just might be up your alley. detroitwatchco.com