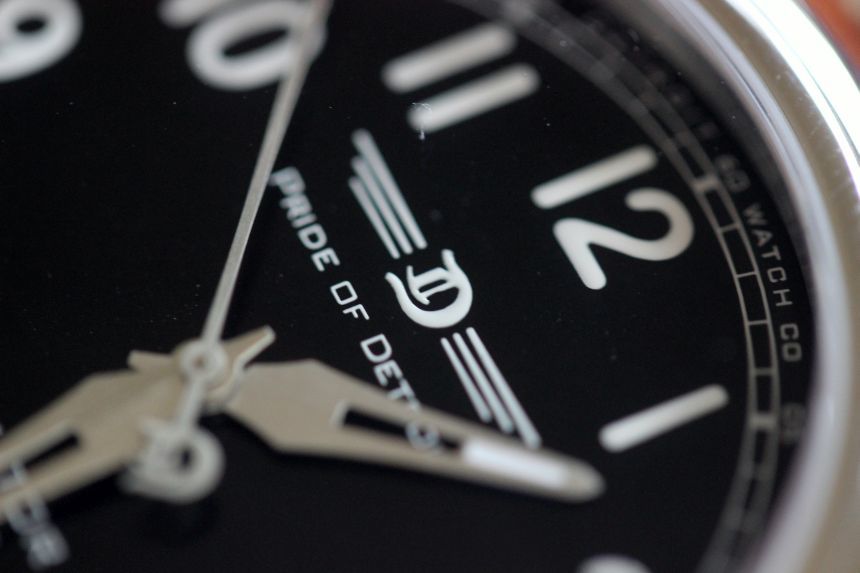 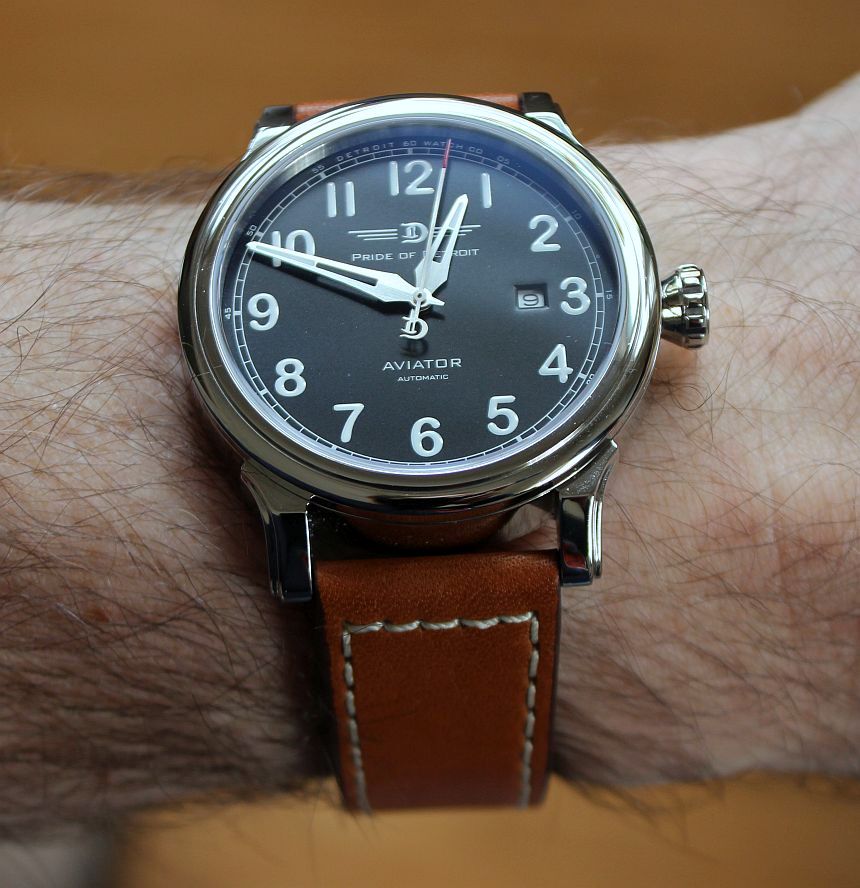 My old hometown of Detroit has definitely been in the watchmaking news as of late. Of course, when you think Detroit and watches, you are probably thinking of the one that borrowed their name from a shoe polish company. While they are certainly the king of the Detroit watch hill, they are not the only ones in town. Today, we will run through a rather sharp new addition, the Detroit Watch Company Pride of Detroit Aviator.

Many people are taking pride in the city of Detroit. As I write this, the Detroit Lions (unfortunately) suffered a loss in the Wild Card playoffs, but I am sure, the “One Pride” message still stands. Detroit is a city that has been beaten down, and keeps getting back up – just like the Lions and their beleaguered fans, among whose ranks I count myself. This is evidenced by the smaller manufacturing startups that have hit the scene. For watch lovers, Shinola is the big player from the D, but they are far from the only watch brand there. 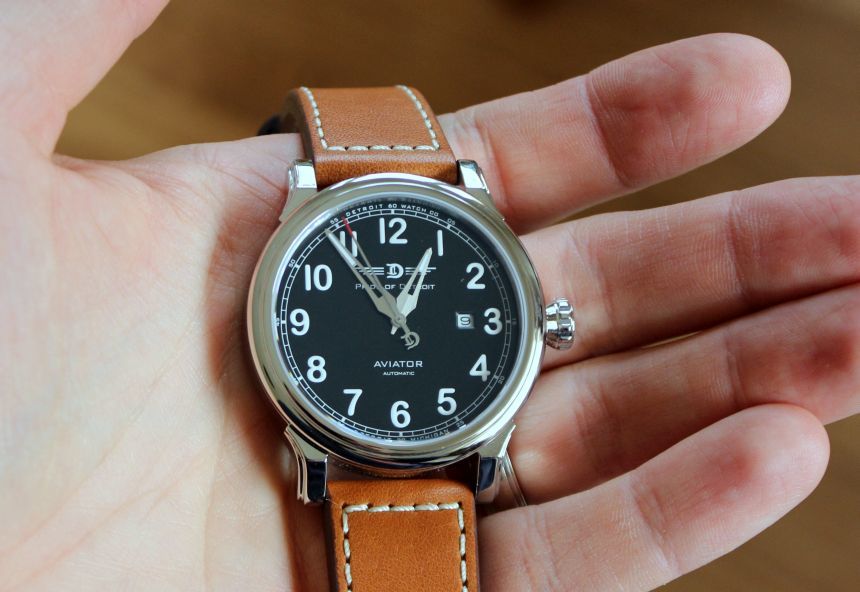 The aptly-named Detroit Watch Company aims to be another great Detroit-based brand as well. With the Pride of Detroit Aviator, they went to the history of the city. In 1927, two months after Charles Lindbergh’s historic flight, Edward Schlee and Billy Brock attempted to circle the globe in 15 days, in a Stinson-Detroiter plane named “The Pride of Detroit.” While they did not succeed in their goal (the flight was ended prematurely in Japan), the pair ended up setting other records.

As you can see, the “Pride of Detroit” plane has plenty of ties to Detroit itself. So, then, it is also fitting that the Detroit Watch Company Pride of Detroit Aviator features that plane engraved on the caseback. Ostensibly, the watch is in their Aviator series, but I would have a hard time placing it into that category myself. Sure, we have the large onion crown that is easy to grip, and the matte black dial with its raised indices, but that is about as close as it gets to be an aviation watch. 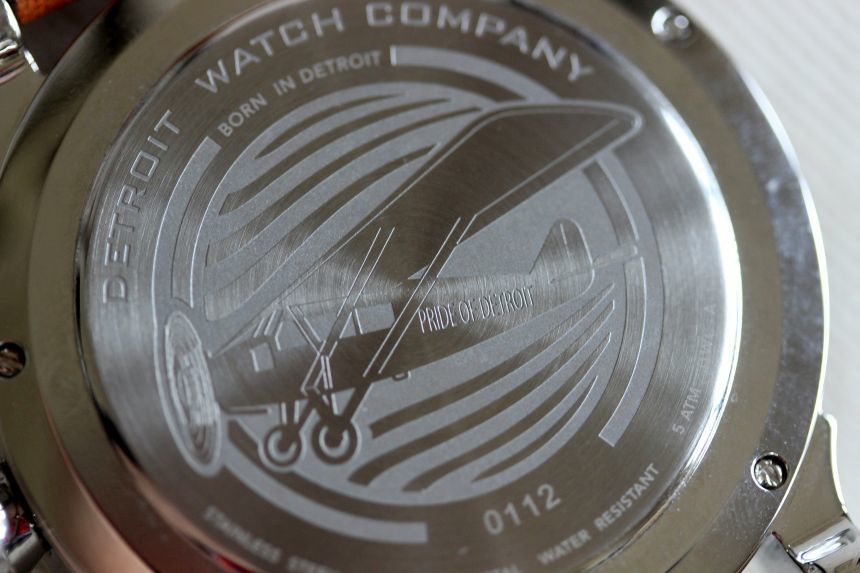 That is not to knock the watch, or the design – far from it. The 44mm steel case is in high polish, and has several stepped surfaces that both give some visual appeal, and manage to give the case a sort of art deco feel. The aforementioned crown does not escape tasteful embellishment, and features a polished Fleur-de-Lis. That may seem a disconnect to those not familiar with Detroit’s background. If you go back far enough, you do find that French connection, in the form of the man who established Detroit in 1701 – Antoine Laumet de la Mothe, Sieur de Cadillac.

Bringing things to modern day, that French connection is also present in the husband-and-wife team that make up Detroit Watch Co. Of course, Patrick and Amy Ayoub call Detroit home now, but Patrick has a bit more of an well-travelled background. Patrick Ayoub is originally a native of Montreal, with time spent in France, Califonia, and other European countries. So, just as the city of Detroit itself, there are some very French roots to this new watch brand. 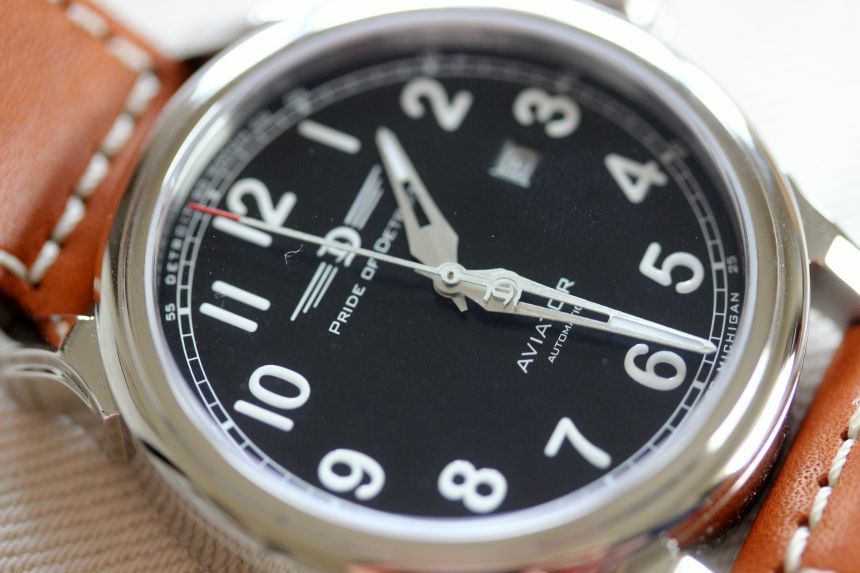 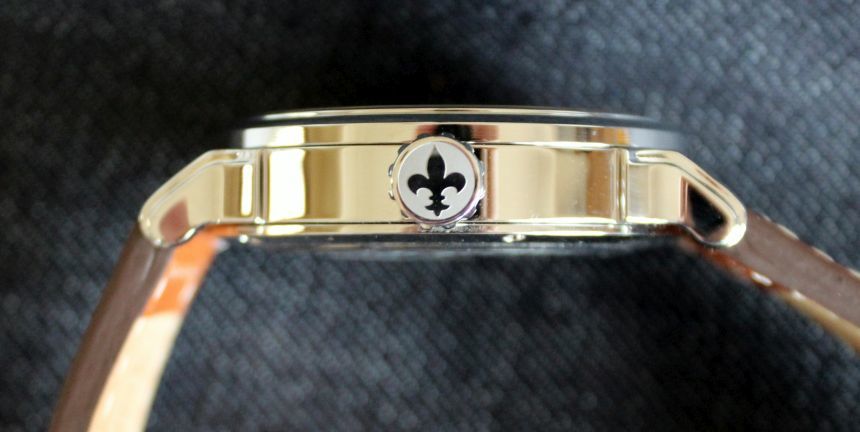 Now, back to the watch. On the wrist, the 108g Detroit Watch Company Pride of Detroit Aviator wears a bit larger, due to the 44mm diameter as well as 12mm height. In some ways, you could think of how it wears in terms of a dive watch, more than in regards to how an aviator watch would normally wear. In other words, this is a bold yet subtly styled watch that does not disappear on the wrist. Speaking of styling, take a look at the handset used. To my eyes, it is a cross between a sword-style and fountain pen nib, and gives something I have not seen before (it’s a shame the lume strip does not fill the whole gap, though). On the seconds hand, you have the Olde English ‘D’ showing up, mirroring the one found at the top of the dial, kicking off the minimal text.

That ‘D’ also shows up on the deployant clasp on the calfskin leather strap. Here is where we came to the one stumbling block I had with the watch. The clasp itself was a trickier one to get positively latched – you would get one side latched, and in the process of closing the other side, you would have the first side pop open. So, it took some finagling to get it to close properly. Thankfully, once latched, it stayed closed and did not accidentally open. 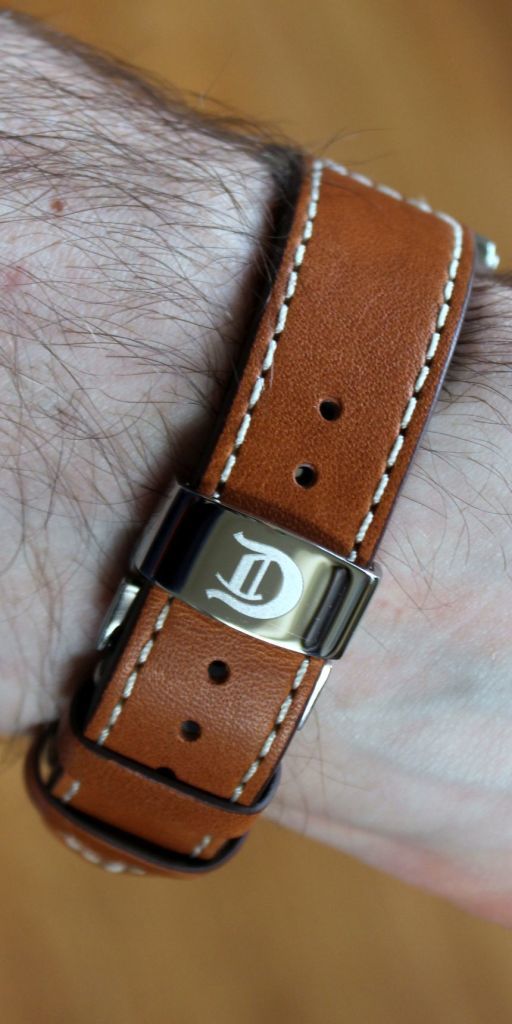 The deployant also ended up causing me some issues in the wear of the watch. Over the course of a day, I would feel like the clasp was digging into my wrist. Taking the watch off would confirm that as well. I tried adjusting the size it was set at, but then ended up with a watch that was too loose on the wrist. So, this is something that I would be aware of. Then again, this seems to be a common issue I run into with deployants on leather (oddly enough, on a bracelet, I have no issues). They just add too much bulk, and when they pair with a thicker strap as we have here, you can get discomfort.

And there you have it – the only “major” complaint I have with the watch. Sure, I would not have minded seeing a more original font being used for the numerals (especially with Team Ayoub being designers), but that is a minor thing, and I can only guess we will see them spread their wings with future designs. Getting past the nit-picking, and viewing the watch as an overall whole, there really is a lot to like. The design manages to be unique without venturing into the realm of outlandish, and truly does well as an homage to the D. 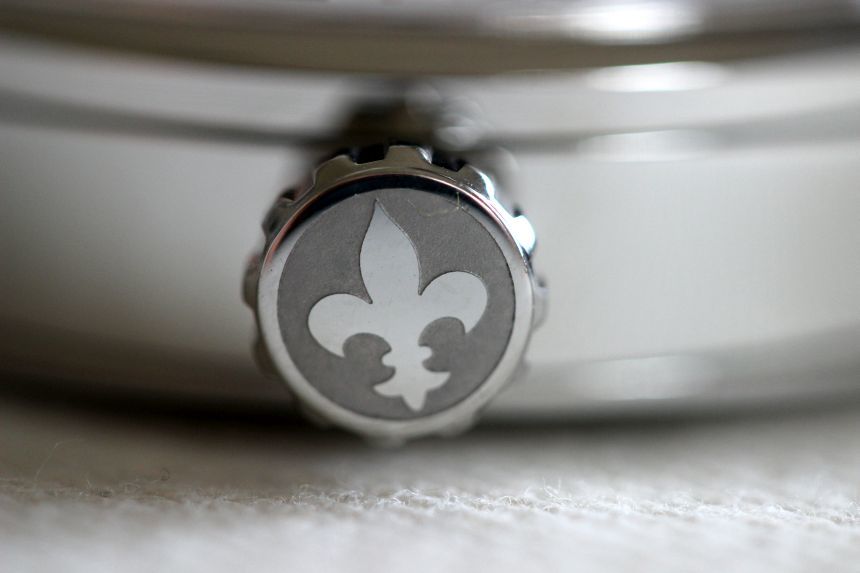 It is also of note that the watches are all assembled in Detroit, by Ayoub himself. As I have seen in experience (and discussions with other brands), having the assembly in-house, as it were, really gives things an additional level of quality control that you sometimes do not get to see coming from the smaller brands, who may rely on all QC and assembly being done in an overseas factory, with the watches being shipped to the brand for sale. This is not to say that it is necessarily a bad thing, as brands should go with their strengths. In the case of Detroit Watch Company, however, I like this commitment, both to the watches being made in, as well as bringing industry back to Detroit. 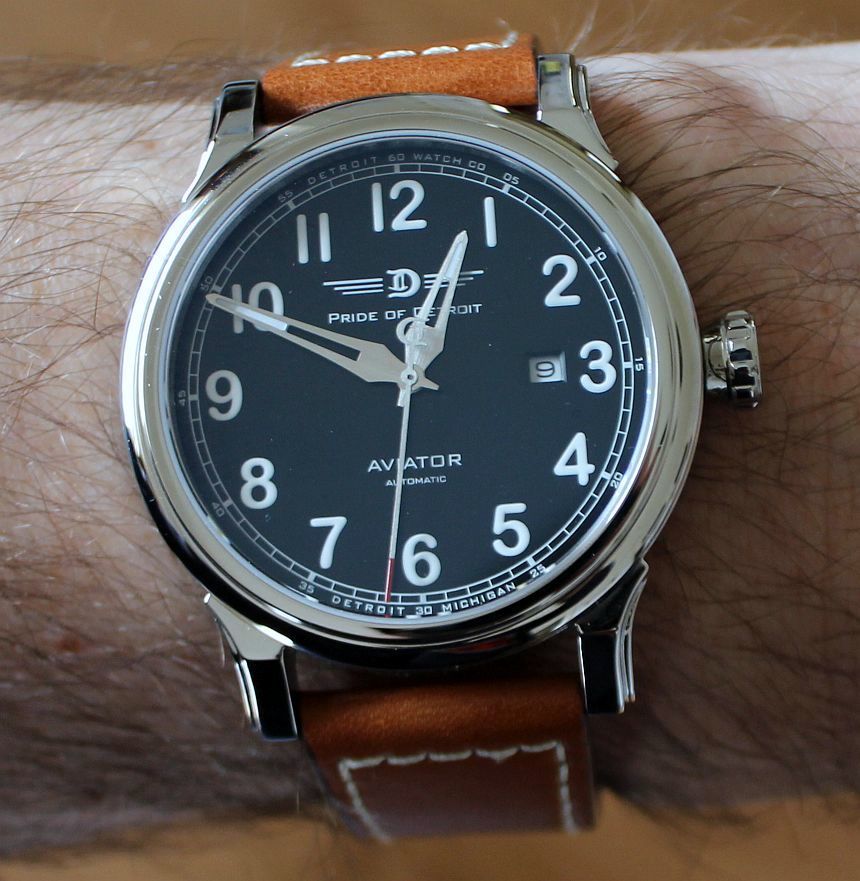 Now, as a reviewer, I know I am supposed to stay impartial. With that in mind – as watches are, by and large, something that is very much informed by our own personal passions and inclinations – when it comes to brands that hail from my old hometown, I am going to have a soft spot for them. Yes, some might balk at the $795 asking price for a Miyota 821A automatic, but I think going with the Miyota was wise, allowing the price to be kept down. There really is a nice bit of design work going on here with the Detroit Watch Company Pride of Detroit Aviator, and I am intensely curious for what will be coming next from the brand.  detroitwatchco.com

Necessary Data
>Brand: Detroit Watch Company
>Model: Pride of Detroit Aviator
>Price: $795
>Would reviewer personally wear it: It might need a different strap for the long run, but yes, yes I would.
>Friend we’d recommend it to first: This is for the guy (or gal) who just has a thing for Detroit and wants to support the resurgence.
>Worst characteristic of watch: For me, it was the deployant clasp on the strap – I think a simple thumbnail would have been much more comfortable.
>Best characteristic of watch: Here, I think all of the Detroit-inspired cues plus the art deco case work together to make the watch stand out.