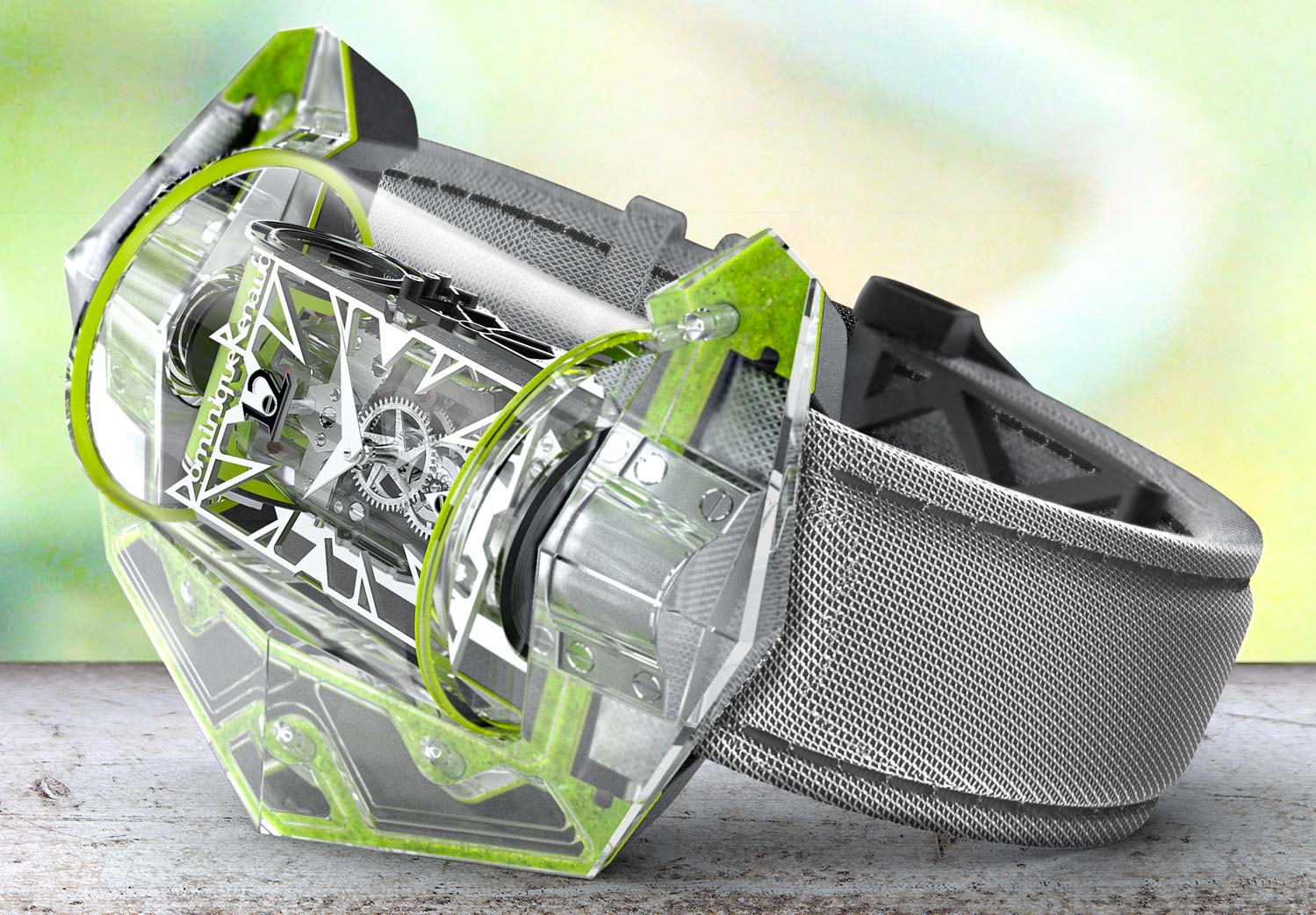 Nearly three years ago I initially debuted the ambitious and innovative DR01 watch project by renowned watchmaker and designer Dominique Renaud on aBlogtoWatch. While I am not entirely sure if the DR01 watches are shipping yet, Mr. Renaud and his team are much closer to the final product shipping, and all the important technical details about this very interesting watch along with its novel movement are now clear. The outcome is a 1,000,000 Swiss Franc watch with a movement unlike anything else that exists out there. The movement is both an artistic spectacle and a real achievement in timekeeping performance. Dominique Renaud clearly understands that the physical design and price prevents the DR01 from being considered practical – but he is very open about the fact that he hopes future watchmakers will continue to evolve and refine this new invention, which is based on something called a “blade resonator.”

The DR01 movement will operate at 5Hz, which a bit faster than the typical 3-4Hz operational speeds of most of today’s mechanical watches and the same as the Zenith El Primero. Having said that, the DR01 movement is unlike anything else out there that exists, as it reinvents a lot of what we take for granted in mechanical watches. Dominique Renaud is particularly proud of this because he both wanted to offer something totally new, but also something that he felt enthusiasts agreed could exist within the same universe as other prized traditional mechanical watch creations. 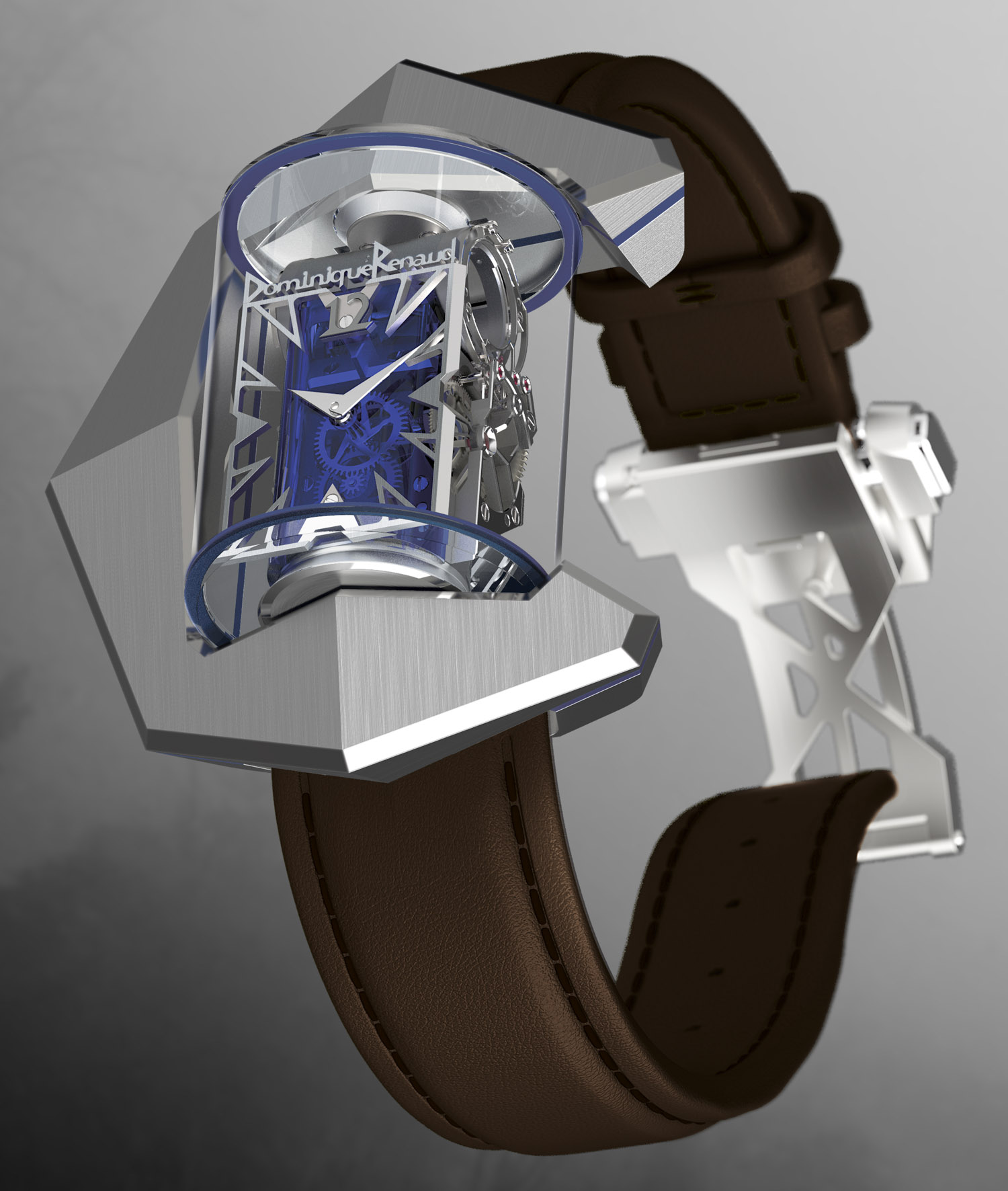 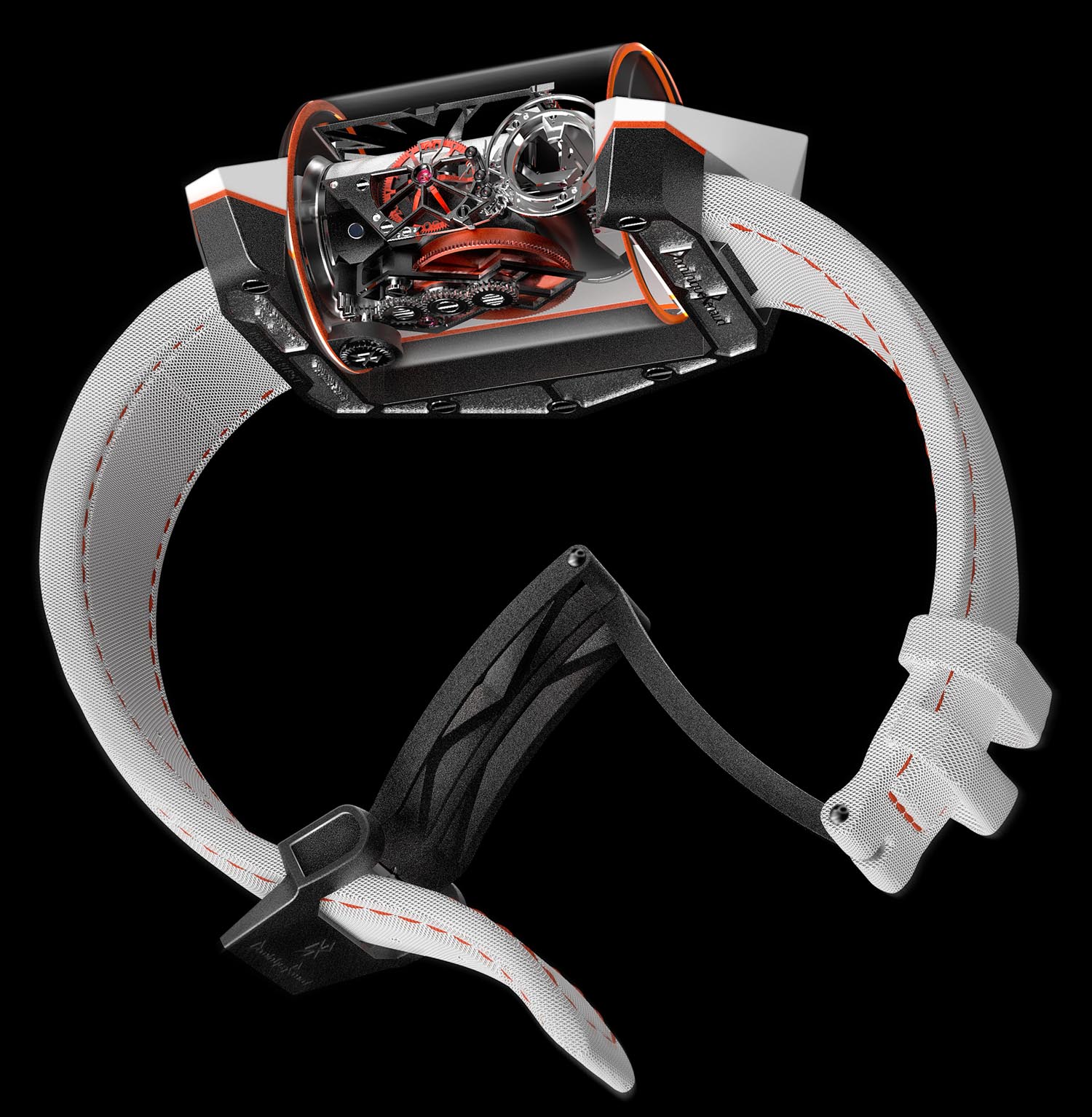 What I think is most impressive is that the movement offers a lot of novelty and also offers a three-week long power reserve without using materials such as silicon or other exotic “cheats” that change the basic formula of a watch. While in some applications silicon makes for a beautifully efficient and high-performance material in a mechanical watch, it has some downsides. One of those downsides is that fast-moving silicon parts are extremely susceptible to shock. Dominique Renaud doesn’t address this issue in the materials about the DR01, but I am adding some thoughts in regard to why silicon was not used in the DR01, and how some watchmakers who have even commercially released exotic silicon part-based mechanical watch systems haven’t actually gotten them to work properly.

The film above from Dominique Renaud does a nice job of explaining the basic elements of the watch but more importantly a bit about Mr. Renaud himself and some of the context around the development of this project. Seasoned watch lovers will recognize Mr. Renaud’s name from his day at APRP (Audemars Piguet, Renaud & Papi). Only a few well-connected watch collectors have been tracking the process of the DR01 and Mr. Renaud’s Blade Resonator system which he has been developing over the last few years. I’m actually rather impressed that this is done. Just over a million dollars seems like a lot, but for enthusiasts looking for serious art and serious technical development that took years to accomplish – there isn’t too much else out there. I seriously can’t see any of the big brands out there putting time and effort into something like this, especially in today’s luxury watch market. 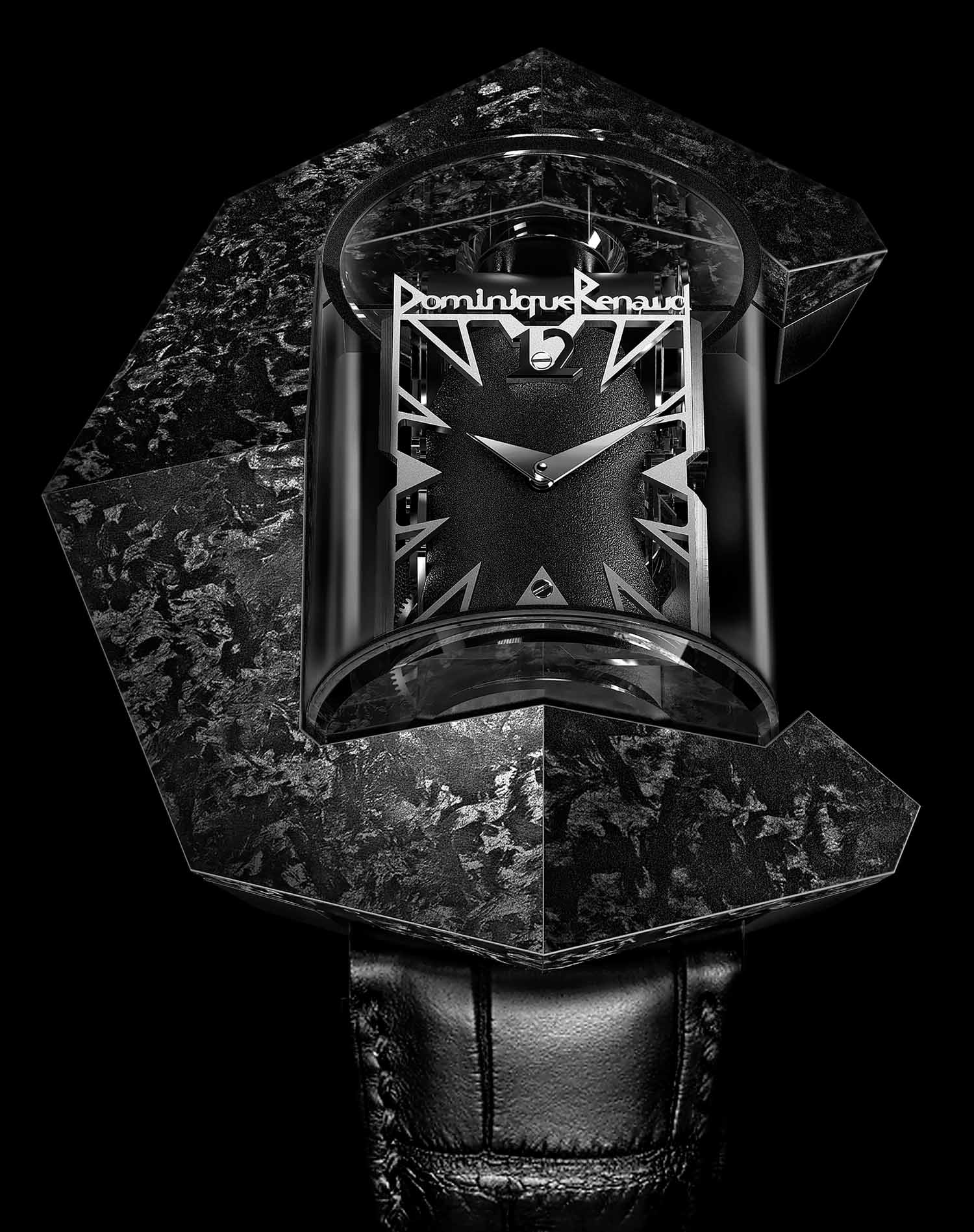 Dominique Renaud’s days at APRP taught him the invaluable lesson of not only how to make a good watch movement, but also how to make a sellable luxury watch. The key he acknowledges is emotion. More specifically, relevance. Invisible innovation is hardly worth paying big bucks for. For that reason, Mr. Renaud’s DR01 has a case unlike anything else out there – designed to show off the DR01 movement in as expressive a fashion as possible. The crescent moon C-style case pinches a sapphire crystal cylinder which contains the movement and watch face all in one charming container. This sapphire cylinder is also designed to pivot so that you can have various angles of the movement and dial pointing up at you. The case comes in whatever material the buyer wants, as all twelve of the initial DR01 watches will be entirely customized for the purchaser. The case dimensions are 45.17mm wide, 27.5mm thick, and 56.47mm long. That is actually within the realm of wearable.

Dominique Renaud himself will personally decorate the movement and makes an interesting claim about how it is a “lab” on the wrist. What does this mean? Apparently, he is inviting other watchmakers to tinker with it. Renaud himself fully admits that novel mechanical concepts like this require years of refinement to perfect and improve. The movement can have various elements such as the operating frequency, spring length, and other variables changed by watchmakers that know what they are doing. In the pursuit of isochronism, Renaud makes the admirable and interesting statement that he wants others to take over where he left off. 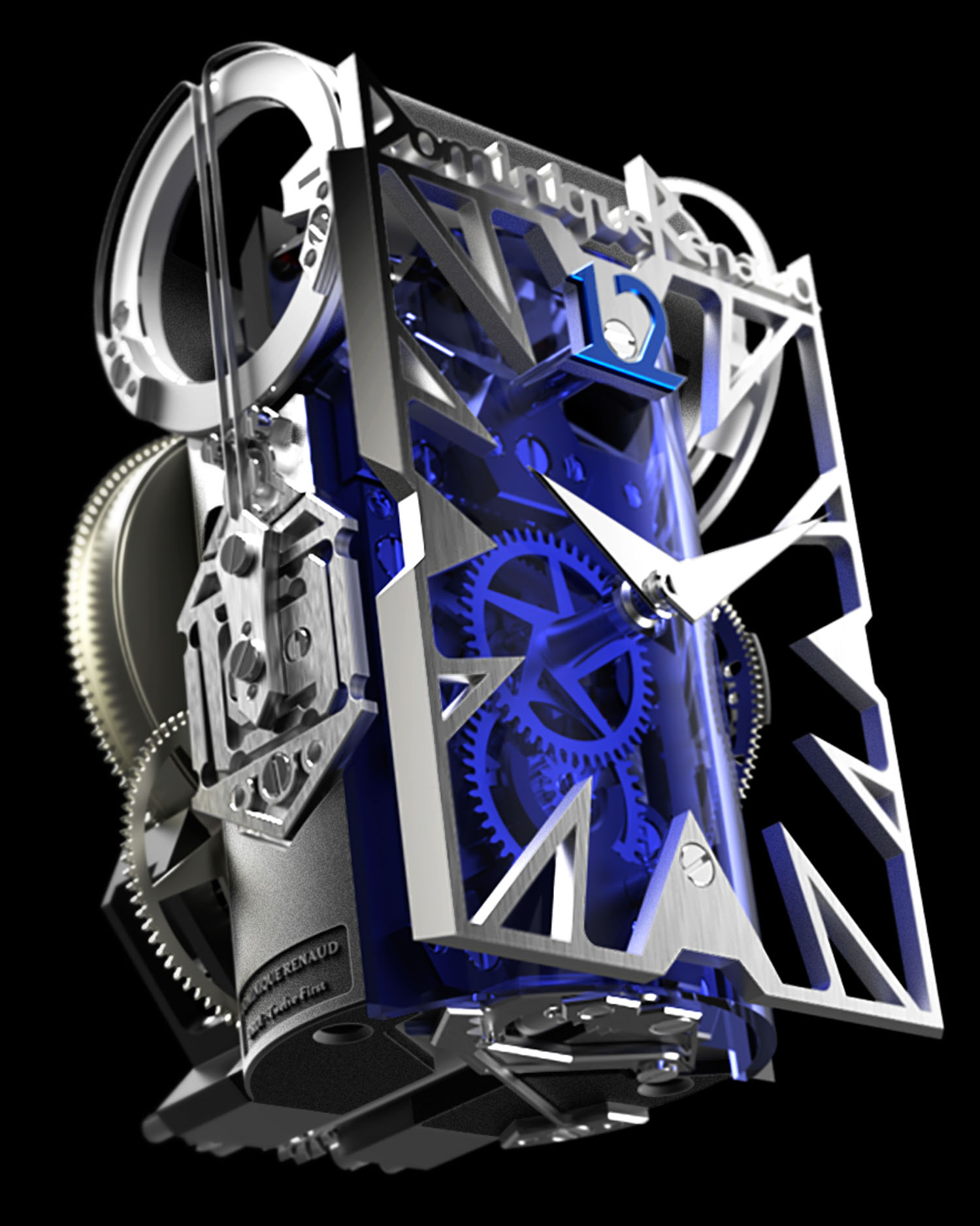 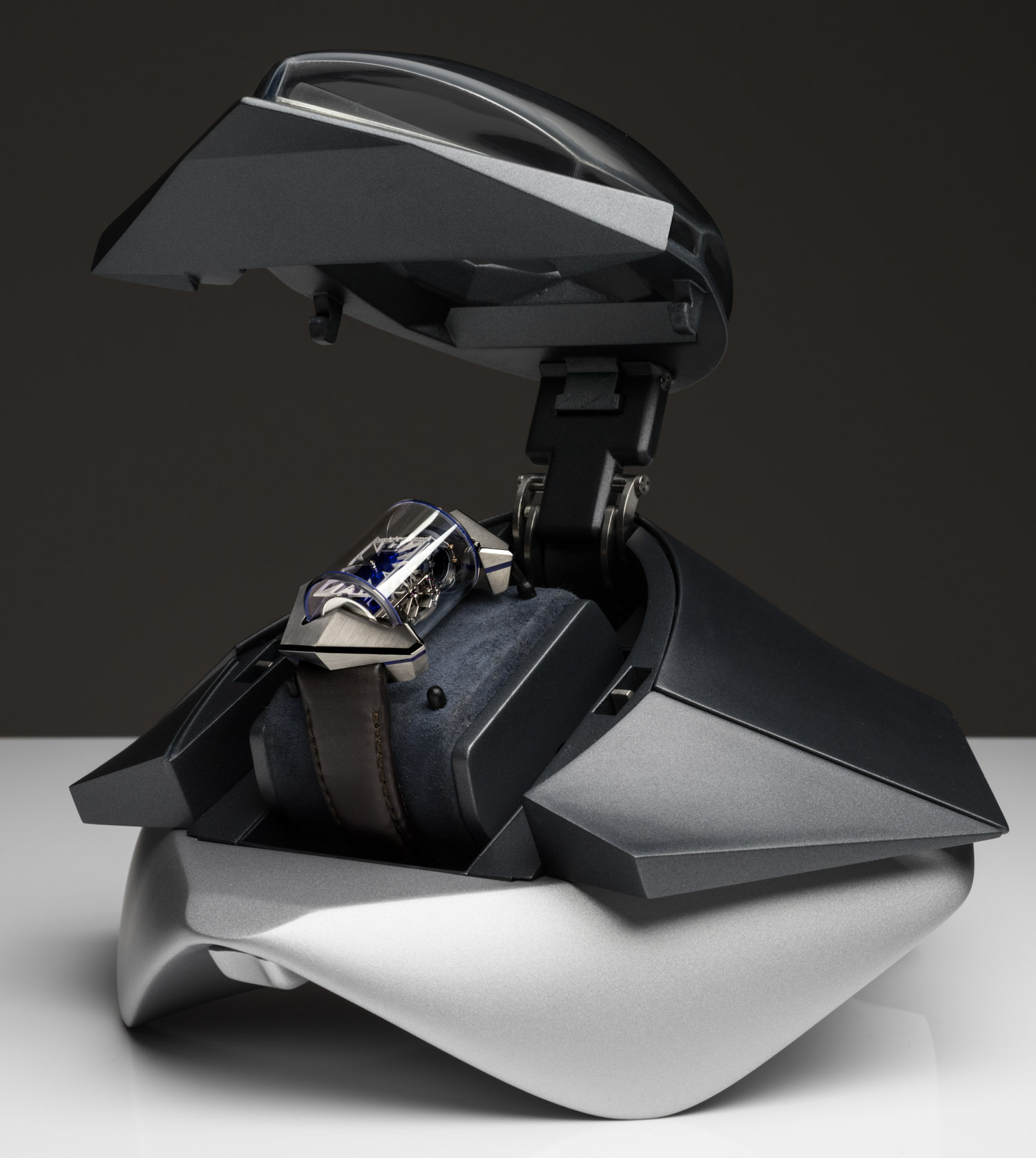 And what of the blade resonator itself? Renaud claims he was inspired by a cylinder-style escapement he saw in a particular antique clock. He adapted the notion while expanding upon it to result in a novel regulation system. Even though it is so much larger than a standard balance wheel and hairspring, the blade resonator is much more efficient because it has a shorter swing. More so, the actual regulating spring for the DR01 is totally novel and uses two blade-style components that interact with a “crossbow” spring that replaces the traditional hairspring. The Swiss lever escapement is replaced by Renaud’s inelegantly named “four-level nine lost beat rotating escapement.”

Perhaps the most traditional part of the DR01 watch is the dial design. While the seconds are indicated on a conical-shaped rotating disc, the dauphine-style hour and minute hands along the rectangular hour track look downright 1920s Art Deco. Then again, Mr. Renaud does need to remind people that this very novel creation is nevertheless aiming to be part of watchmaking history. As I said, the first of the DR01 watches will be the Dominique Renaud DRo1 Twelve First (limited edition of 12 pieces) with a price of 1,000,000 CHF.