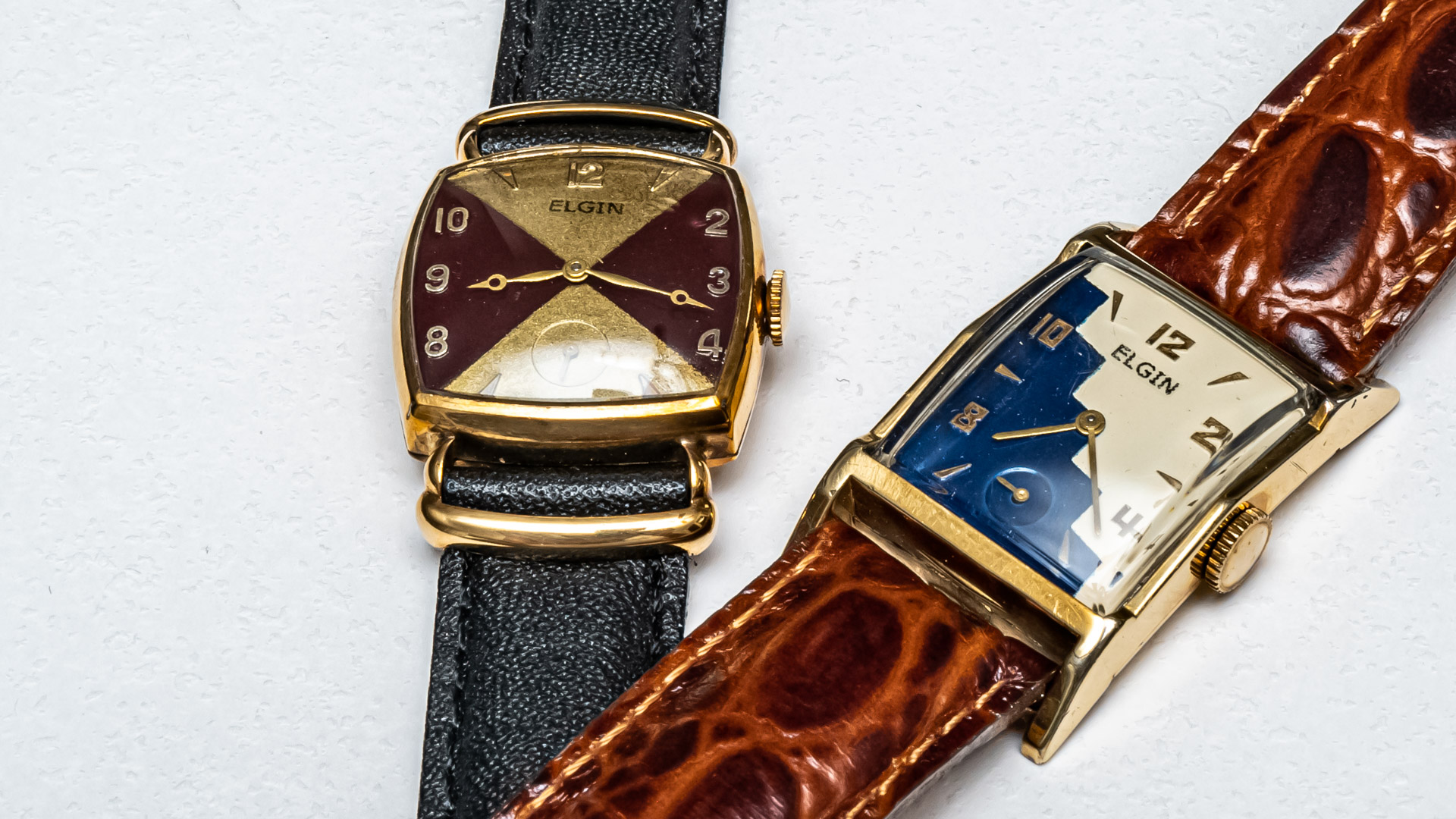 “This profession did not exist before me. I invented it— drawing my inspiration from the work of the foremost designer worldwide, Raymond Loewy, who designed the American railways, the Shell logo, the Lucky Strike cigarette pack, etc.” – Gerald Genta (full interview here).

Raymond Loewy was the most prolific and influential industrial designer in modern history, responsible for the designs Genta mentioned, as well as the Studebaker Starliner, the Greyhound Bus, Air Force One, and so many others. From the late 1920s through the middle of the century, Loewy produced countless designs that would earn him the nickname of “the father of streamlining.” With a truly dizzying, vast career, Loewy brought Mid-Century Modern, as well as earlier Art Deco style, into the lives of Americans in a way that I never really appreciated. I knew about Loewy vaguely, but I never really got to studying his career until very recently.

A local enthusiast and collector here in Los Angeles contacted me some time ago to share that he recently picked up some pieces at a Loewy estate auction, among which are what I believe to be the only watches Loewy designed. The two watches were from Elgin, the now-defunct American watch company that was based in Illinois. While these were production Elgin watches, it seems that Loewy hand-painted and designed the dials on them, but sadly, they were never produced. It’s a shame since it’s possible we could have an Art Deco classic on our hands with the “staircase” design dial we see on the rectangular watch. But it seems like these watches were one-offs for the prolific industrial designer. In fact, it looks like the Elgin logo was actually hand-repainted on the dial, which could be for a variety of reasons that we’re left to guess about. 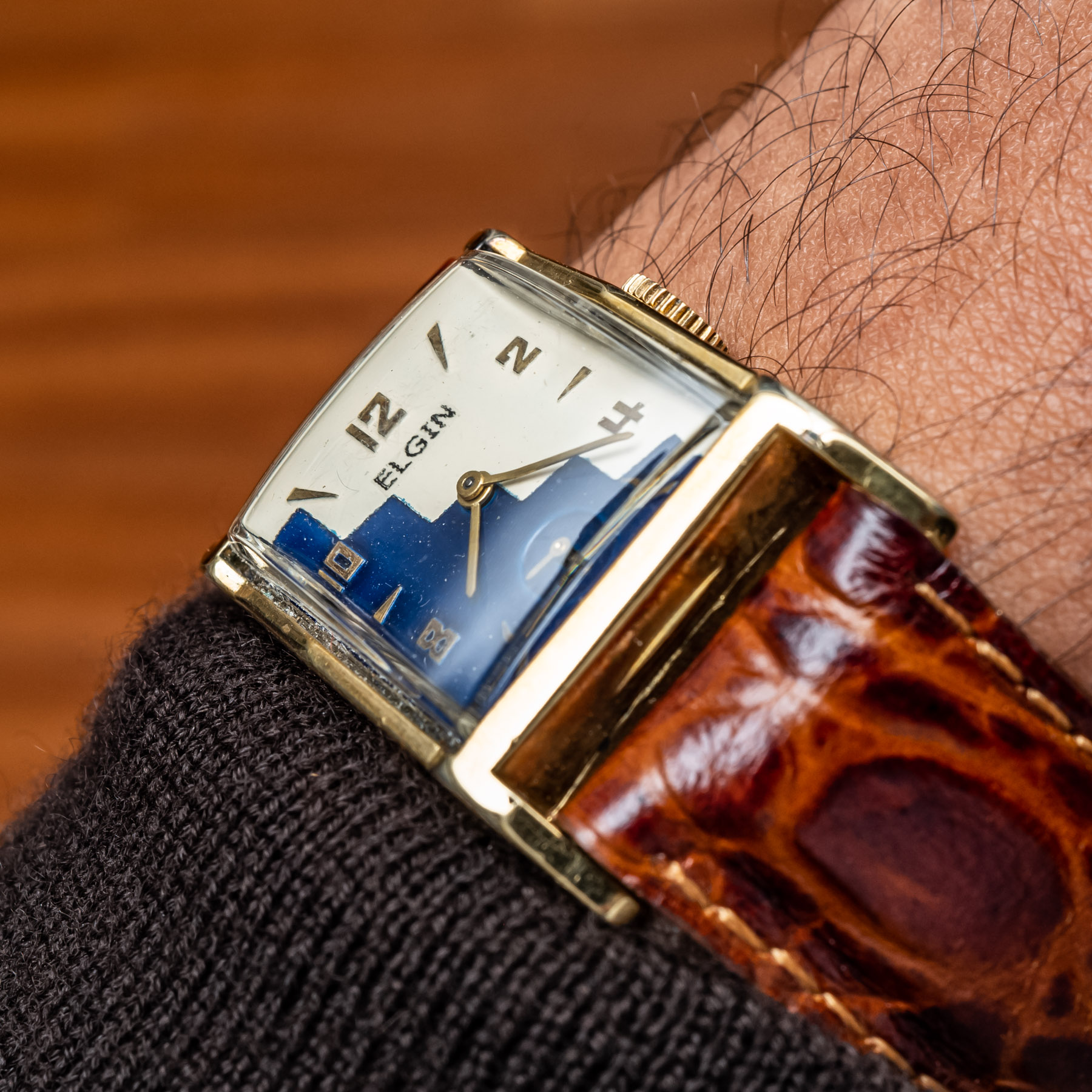 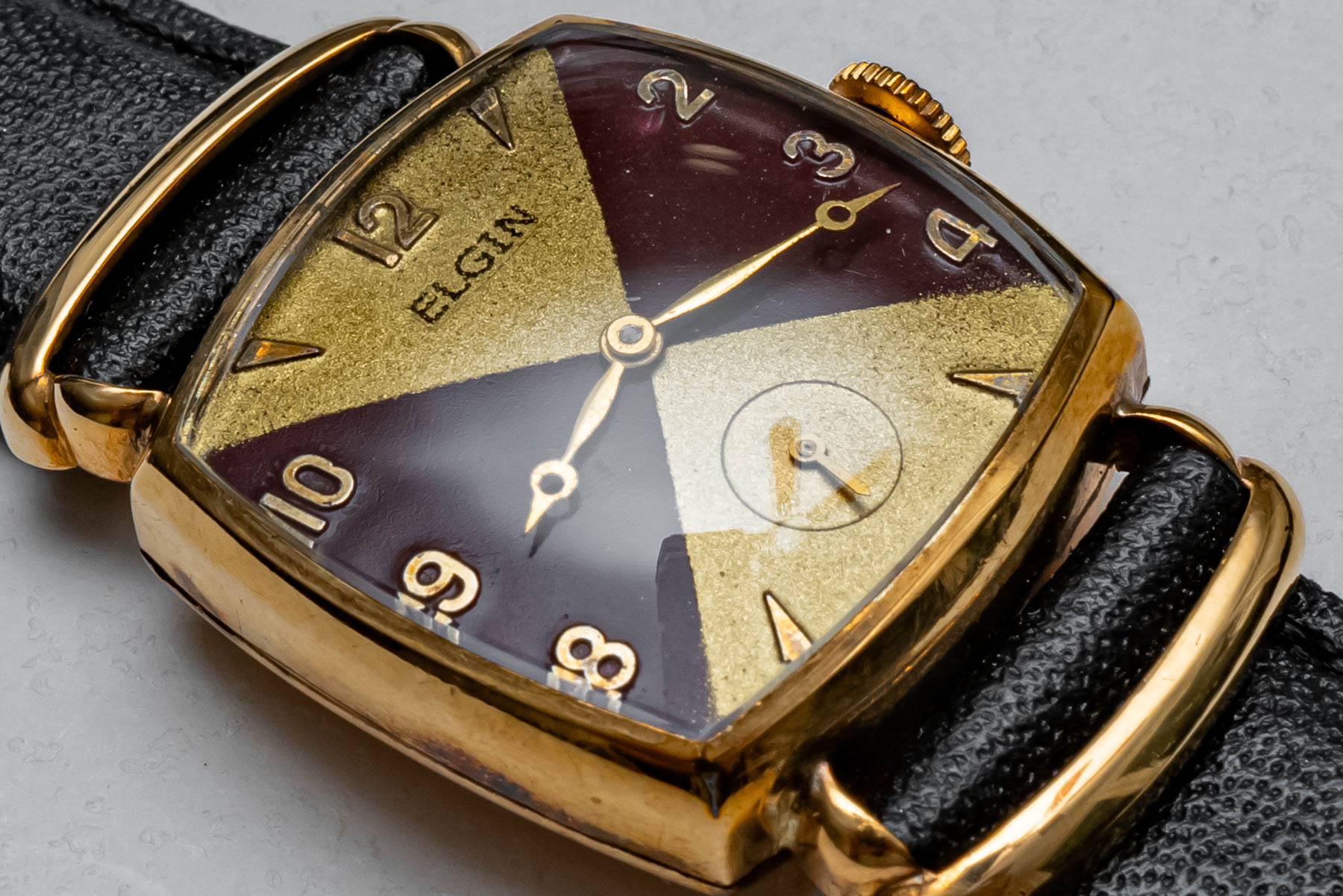 We do know Loewy designed these in the first half of his career, which leaned more toward Art Deco than the mid-century designs he would become known for later. Bonham’s cites “circa 1929,” though that is also the year he officially became an industrial designer and opened Raymond Loewy Associates. It’s possible he could have done these in later years, as well, but I think it’s a fair assumption to make that he produced these when he was in his Art Deco phase. 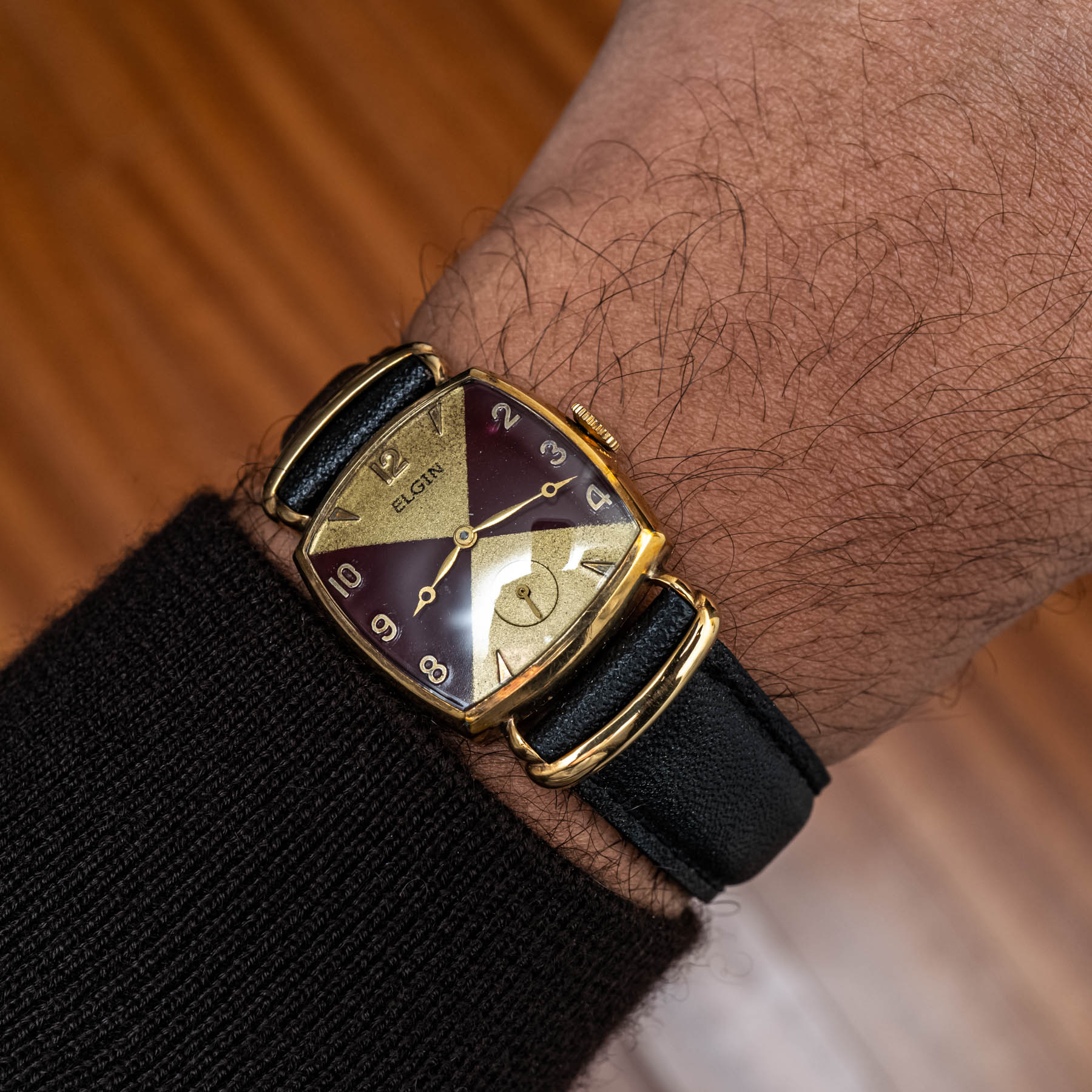 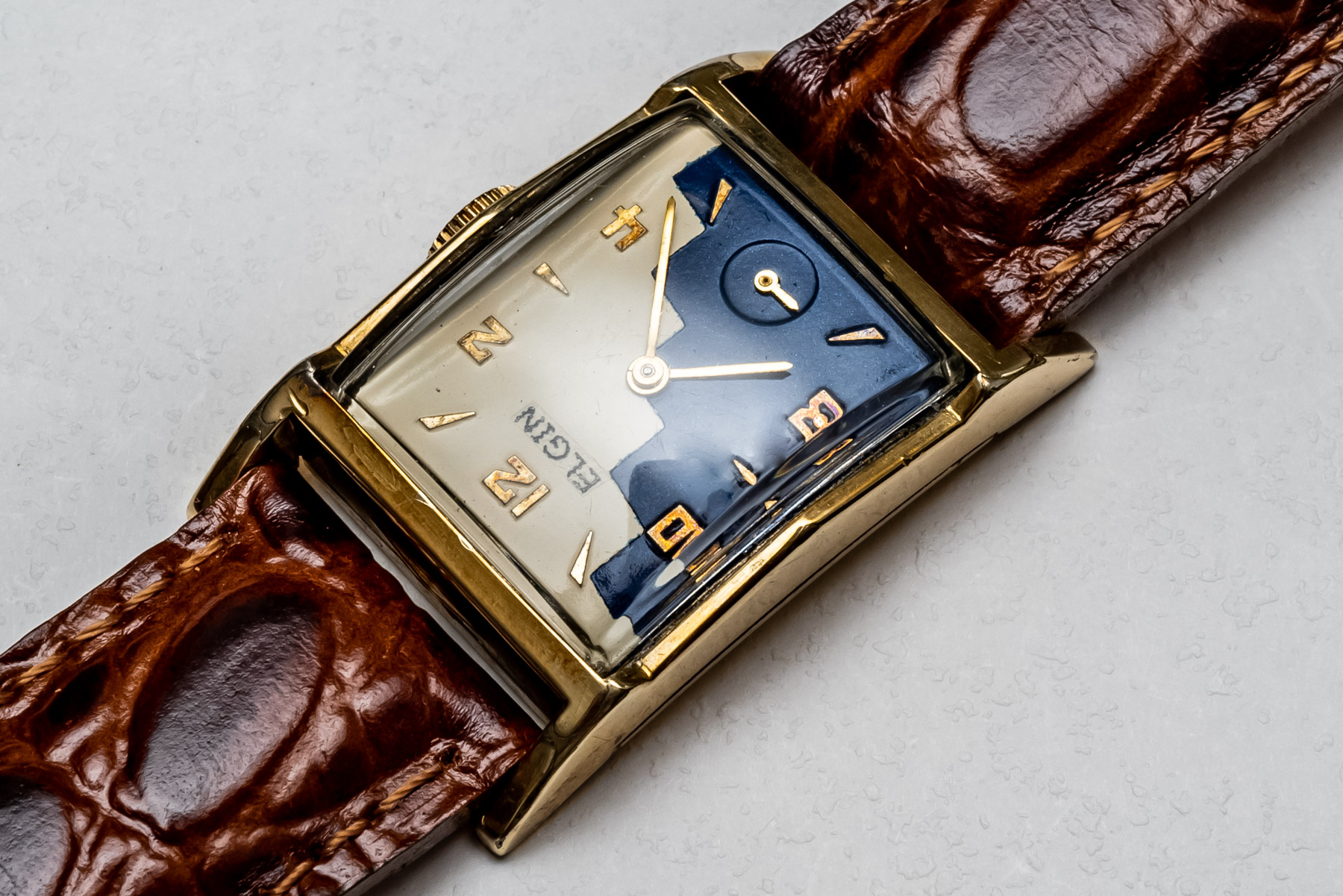 These two Elgins were clearly prototype designs by Loewy, as the dials were done by hand, perhaps using a stencil for the staircase pattern. Looking at the blue steps on the rectangular watch, you can see how they actually slope down a little at an angle instead of being totally straight. It’s not lost on me that Loewy didn’t redesign the cases of these two watches and, from what I gather, he left the hands and indices alone, as well, and focused entirely on the design of the dial.

But again, we are left to reasonably deduce Loewy’s motivation behind these two watches. I suppose it’s entirely possible he just made them for himself and didn’t have any ambitions further than that, but there really is no record available that allows us to get inside the head of the prolific designer. 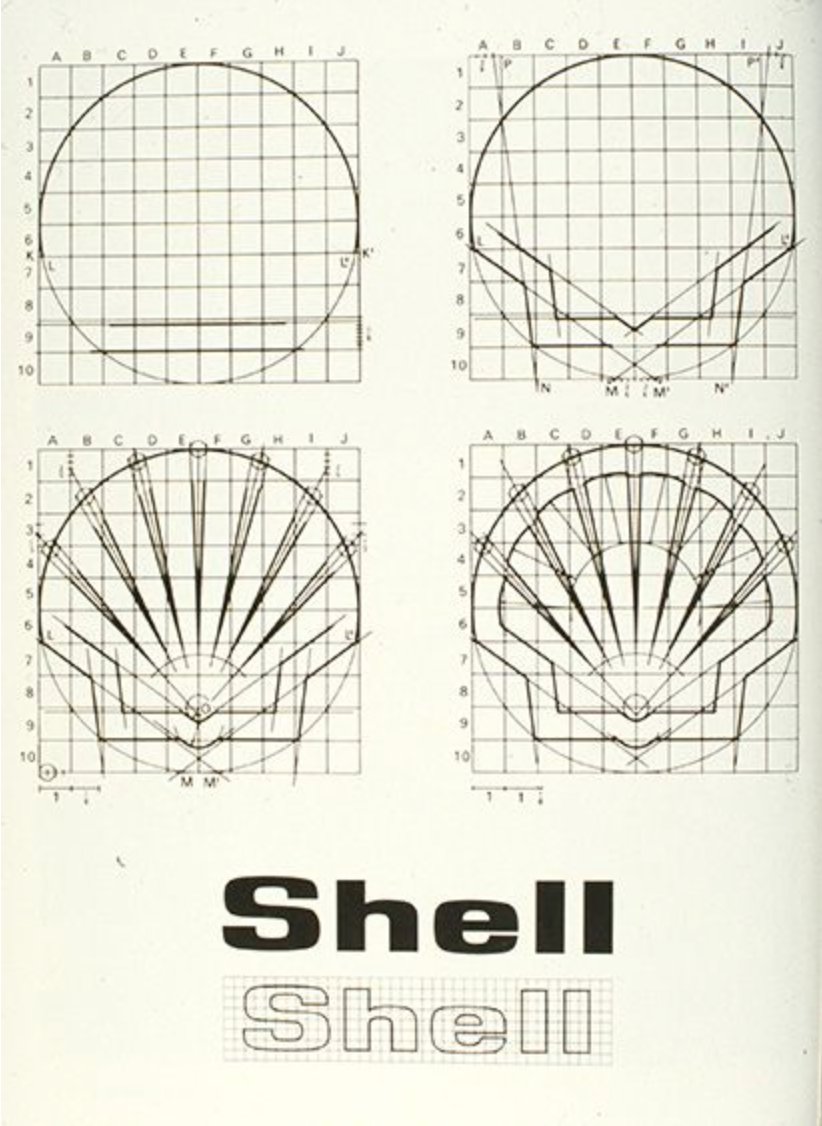 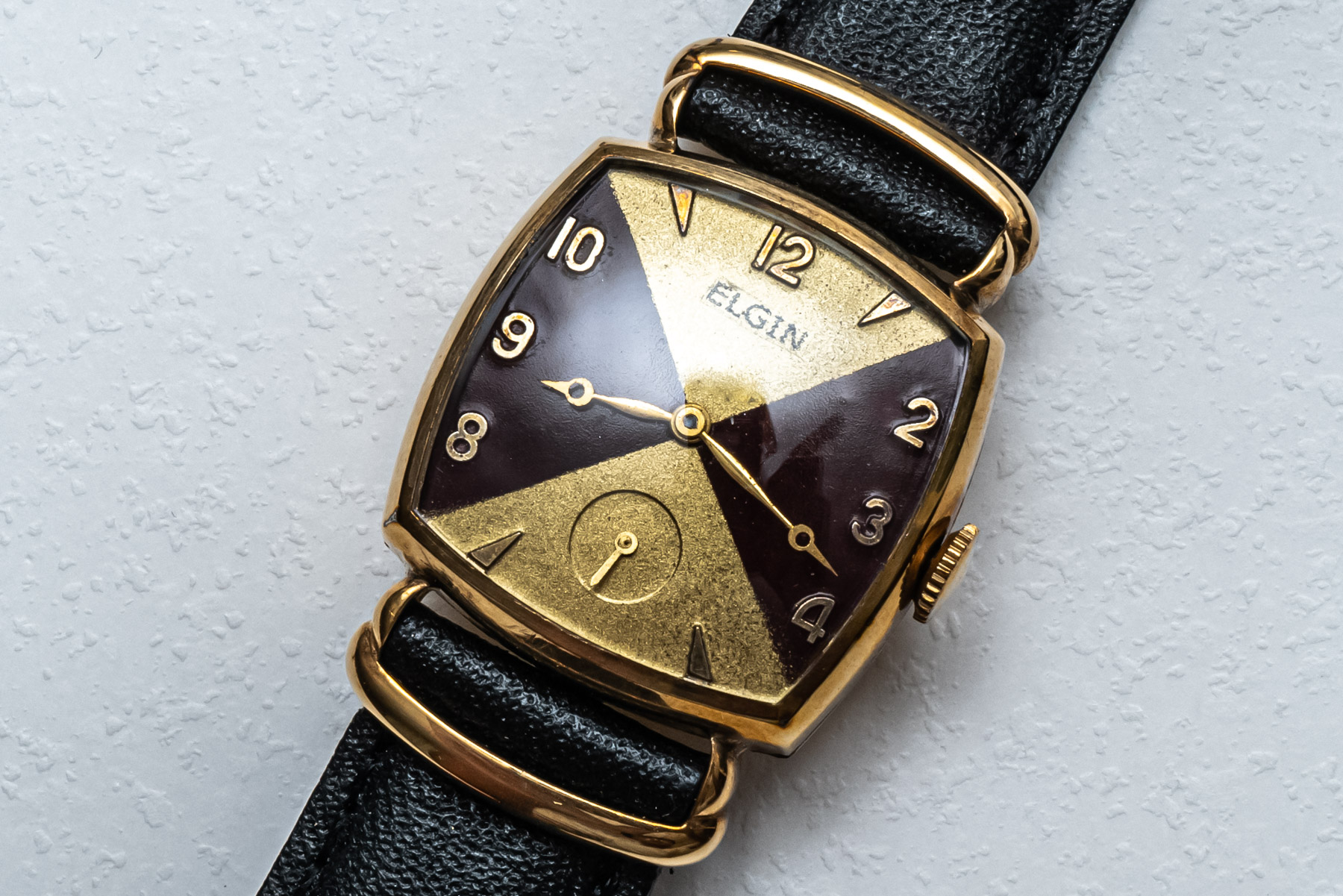 The cushion-shaped Elgin with the fancy hooded lugs has a dial that Loewy cut like an X with two symmetrical triangles in a granular gold finish across from each other and two dark maroon triangles across from each other. My mind keeps going to the concept of two opposing hourglasses representing 12 hours each, but that’s just my take on it. 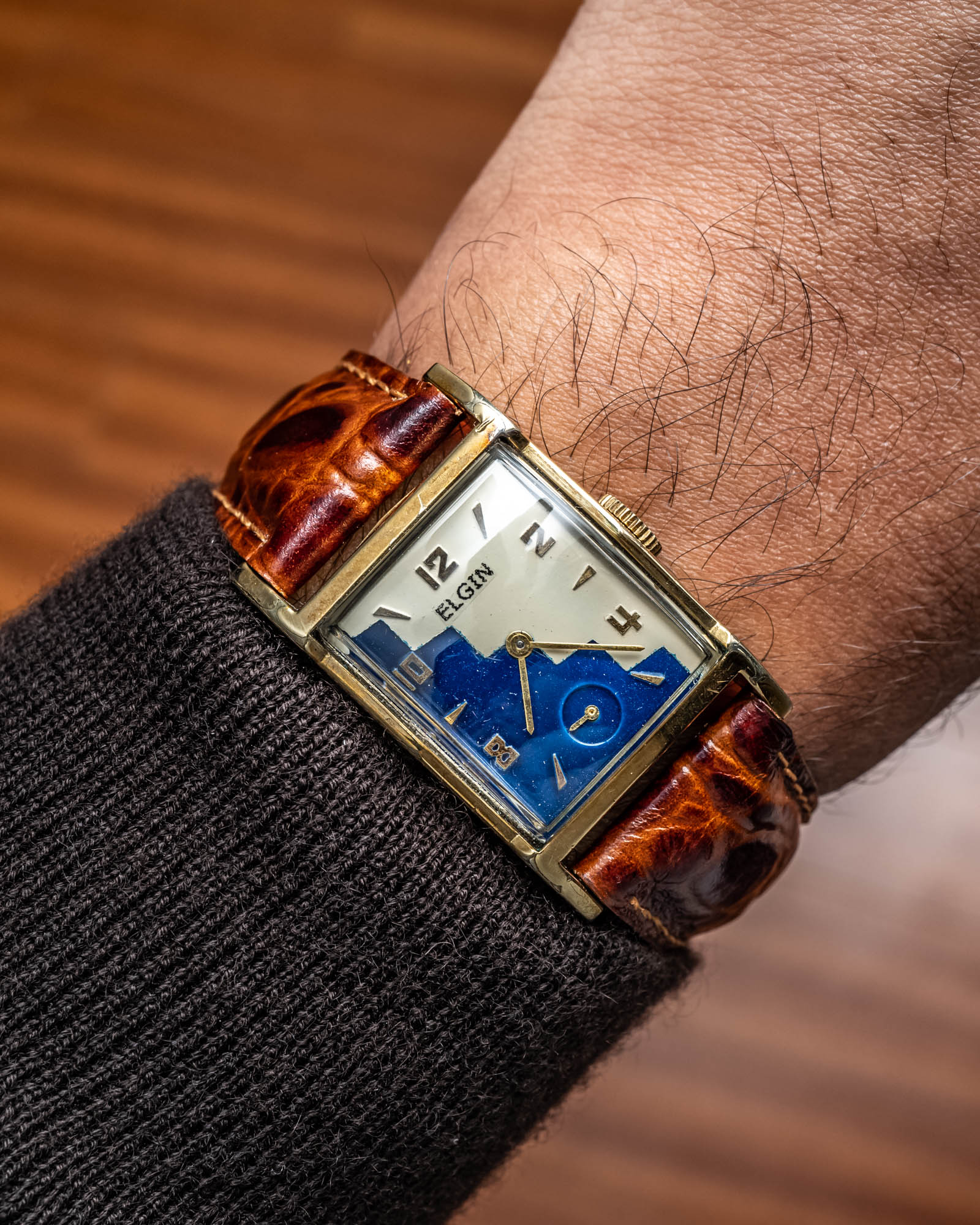 The rectangular Elgin with the blue staircase dial is the more interesting of the two, in my eyes. The steps evoke a strong Art Deco skyscraper vibe that perfectly complements the Tank-style case shape. Though it’s executed differently, I see the day and night imagery here as well with the contrast of the light cream with the blue. Of course, it wouldn’t be Loewy without his design language, and the diagonal symmetry of the steps is right in line with his work. 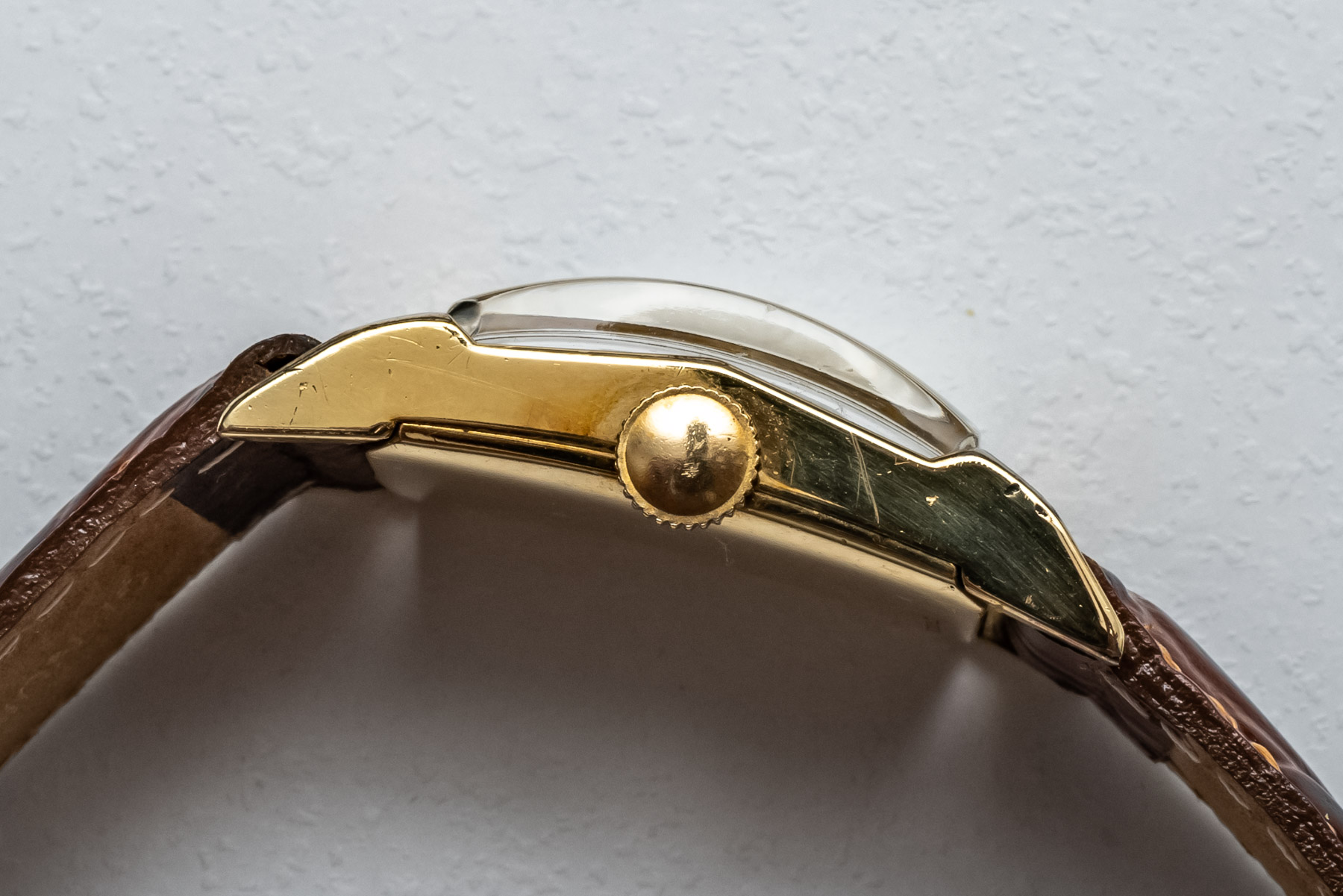 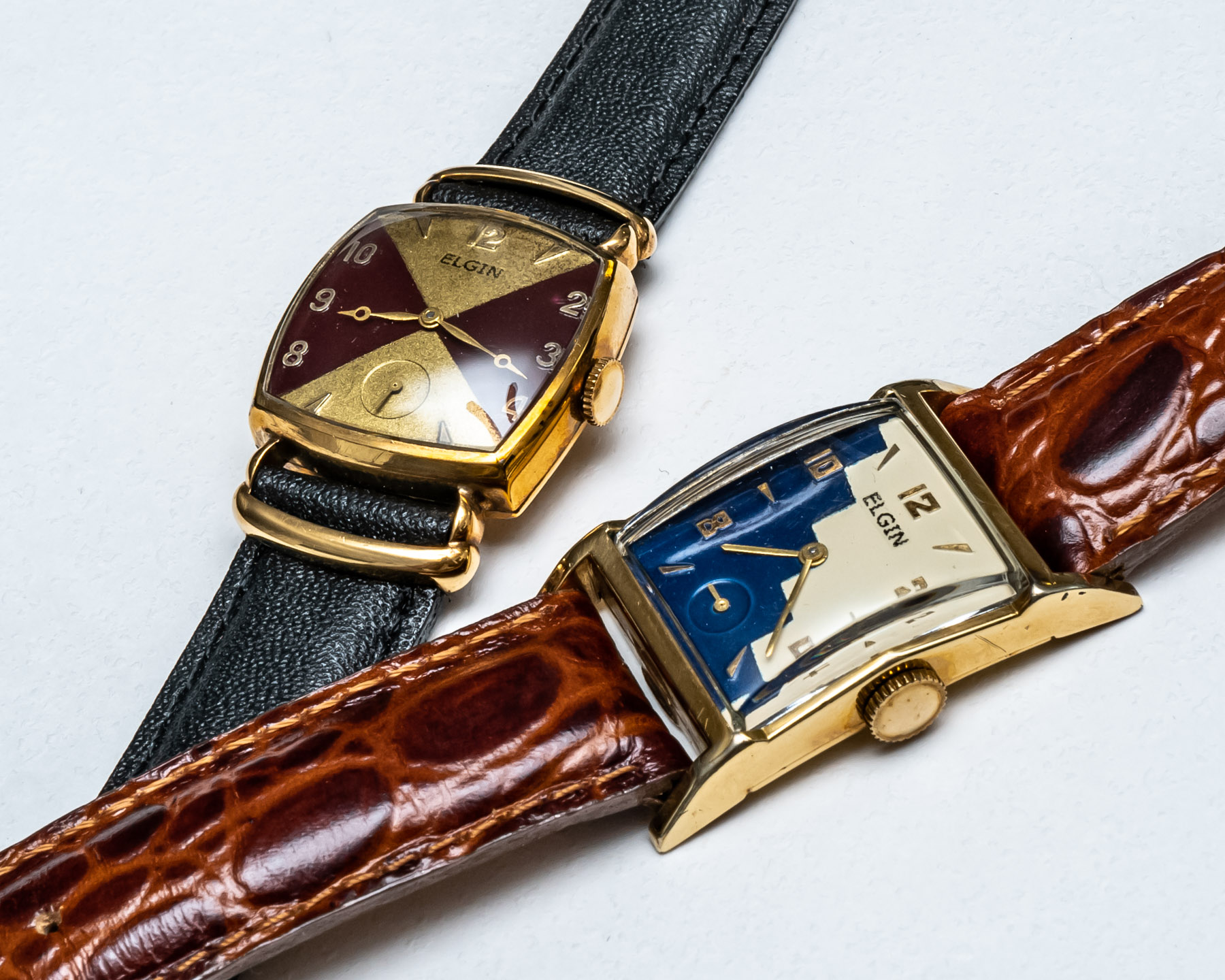 Loewy wrote a book called “Never Leave Well Enough Alone,” and it’s very possible that he may have been fond of how Elgin designed cases but felt they were unfinished with such staid and static traditional dials. These two Elgins ask more questions than they answer and, sadly, there is precious little information to go on. It’s possible that the designs were rejected by Elgin. Even though Art Deco-style watch cases were very popular at the time, you don’t really see creative dial colors and patterns from this era.

Maybe Elgin didn’t think people would buy watches with these dial designs? If that’s the case, these two pieces could be symbols of one of the biggest blunders in watch history. 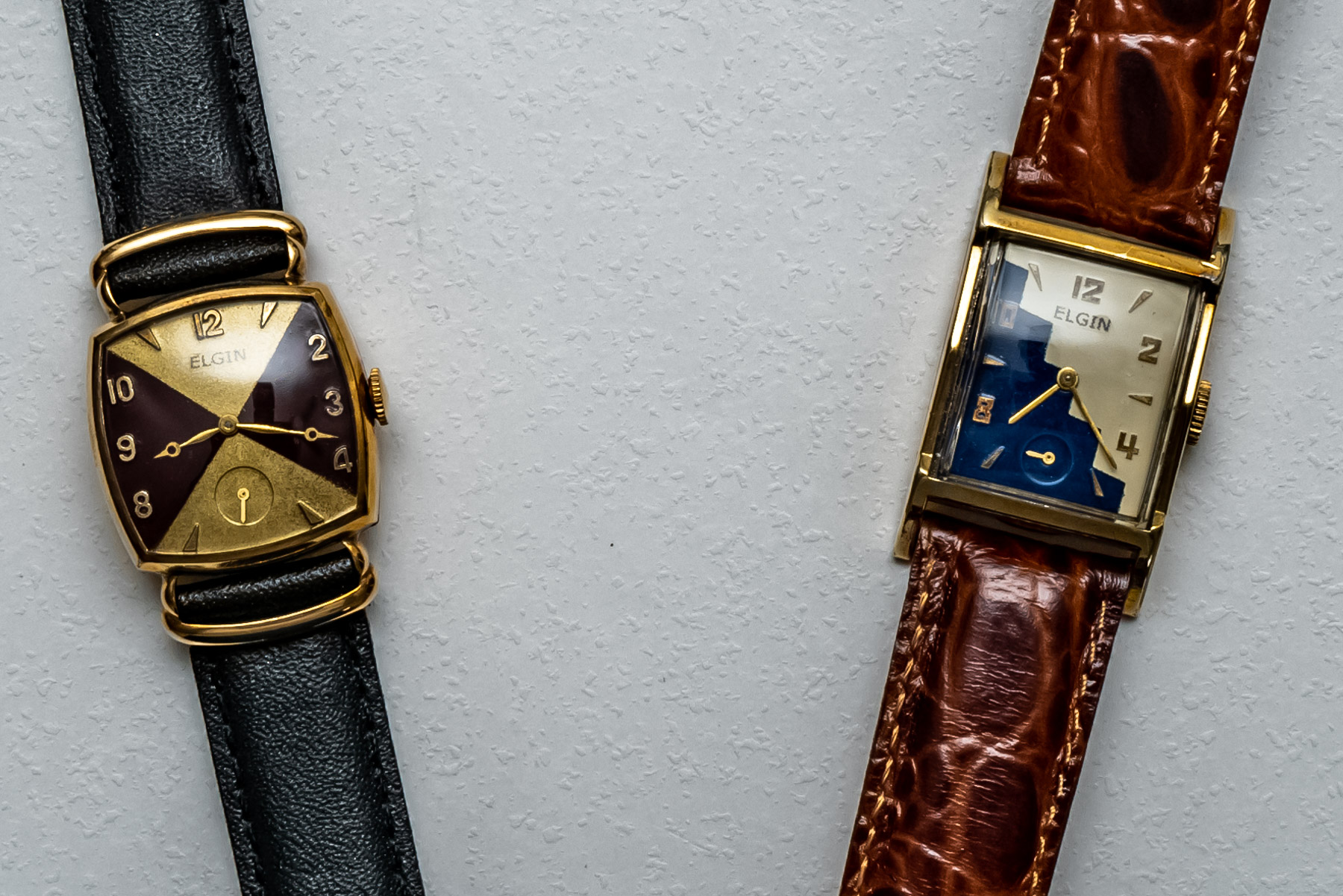 Loewy’s fingerprints are all over the place in classic American design, ranging from Studebakers, the Greyhound bus, Coca-Cola vending machines, Air Force One, and logos for Exxon, Shell, TWA, and the Post Office. He pushed the limits of mainstream design while not alienating consumers. He is quoted as saying, “The most beautiful curve is a rising sales graph;” in fact, he drove sales up for his clients. Who knows how he influenced the designs of Genta and other watch designers, but it was a treat to be able to handle these watches and imagine what was going through Loewy’s mind as he created them.