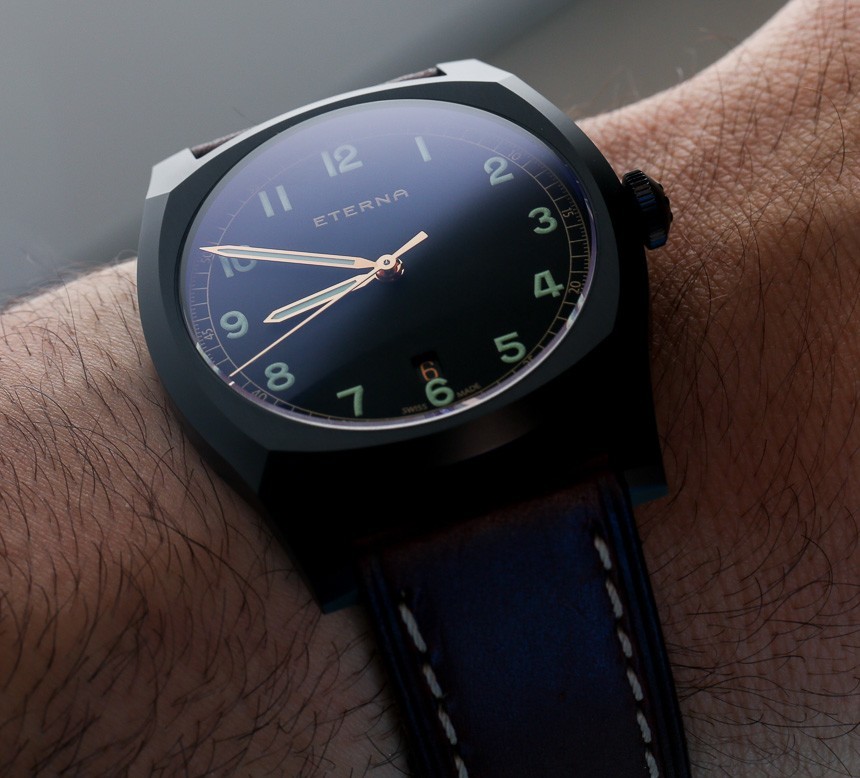 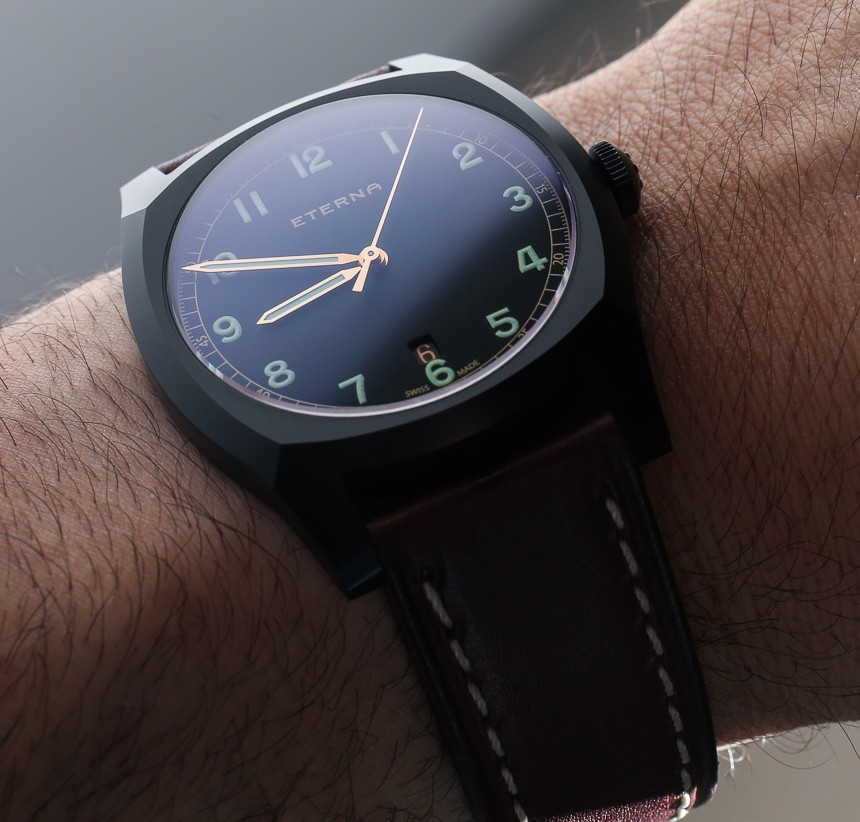 The Eterna Heritage Military limited edition watch was among the more unique timepieces we saw in Basel this year. At the Baselworld 2014 watch show, Eterna had a bold presence, thanks to their new corporate ownership and fresh internal direction by Mr. Bruno Jufer, who was formerly the CEO of Antoine Martin watches. Retro-revival was a big thing for Eterna, and it remains to be seen where the brand ends up in a few years after it has settled in with its new leadership. In fact, all of the new Eterna watches are based on retro models. I do hope that they will offer some more modern designs soon, but what I can say is that for the money the quality of the 2014 Eterna watches is fantastic.

The Eterna Heritage Military watch is a strange item that I really didn’t know what to make of at first glance. To be honest, I wasn’t too excited about it when I first saw it, but the design oddly grew on me. I still don’t know whether I really like the watch because of its design or because of its incredibly legible dial. Part of me thinks the watch is too simple, while another part of me thinks the watch is deceptively complex. I don’t know if the Heritage Military watch is right for yours truly, but in many ways I like it a lot, especially because of the impressive detailing. 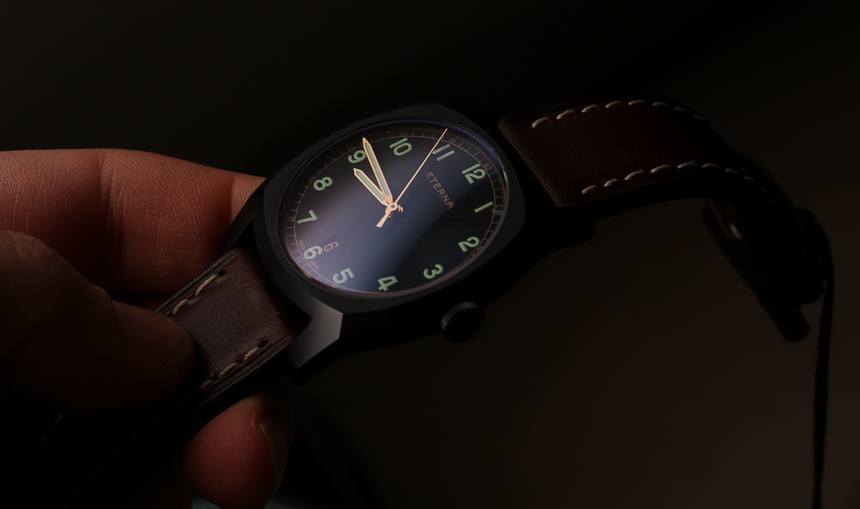 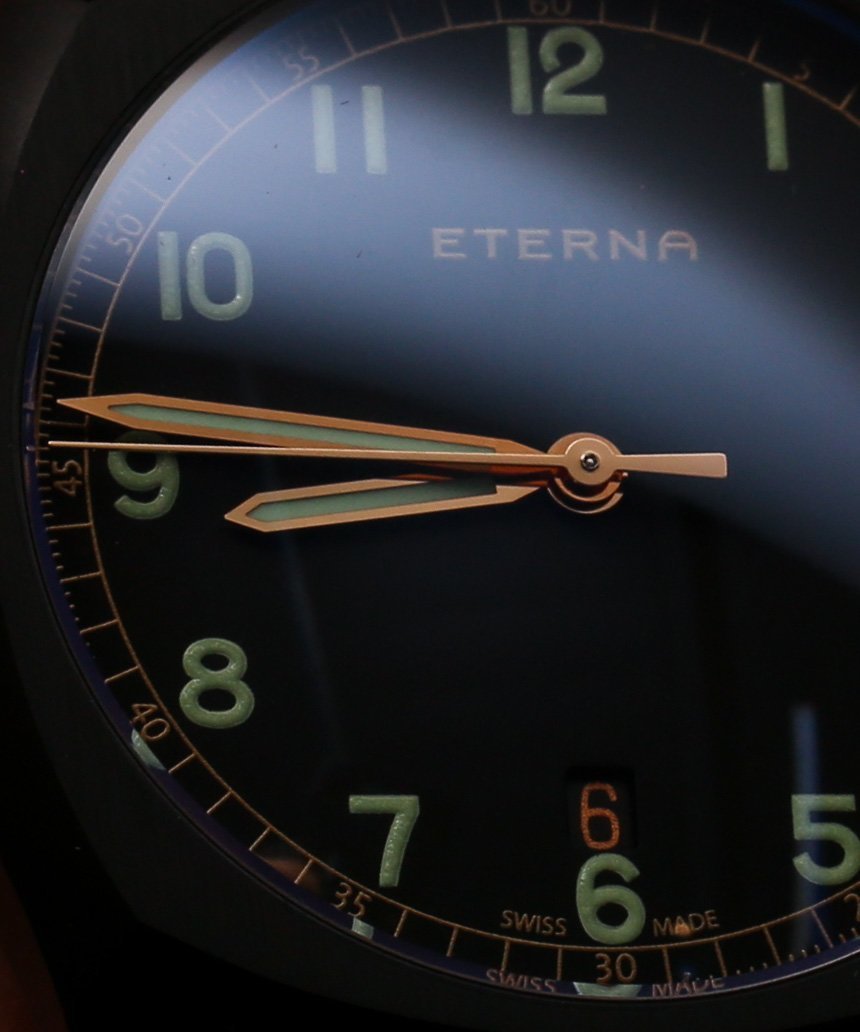 As a vintage inspired timepiece, the Eterna Heritage Military watch is a modern version of a timepiece from 1939 that Eterna produced for the Czechoslovakian army. On the rear of the original 1939 model was an engraved statement of “Majetek Vojenské Správy,” which roughly translates to “property of the military” from Slovak to English. Further, some (but not all) of the original 1939 watches had a small set of crossed daggers engraved into the upper left lug of the case. These military property watches where apparently used by pilots and other important soldiers in the Czechoslovakian army.

Today the Eterna Heritage Military Limited Edition watch isn’t for military use, but rather for collectors and those who enjoy historic military-style timepieces. Also, all things considered, it isn’t all that expensive given today’s luxury watch pricing. In most ways, the new Eterna Heritage Military watch is similar to the original 1939 model, though the modern version is larger, at 40mm wide. Though they share a very similar cushion-style case with round dial for the time. 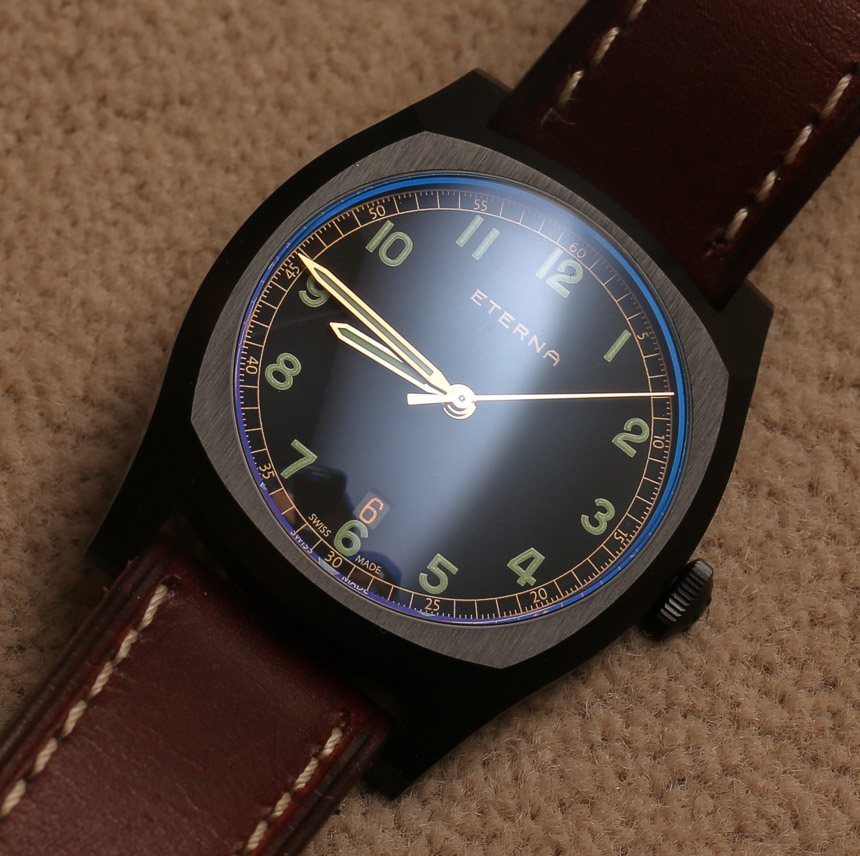 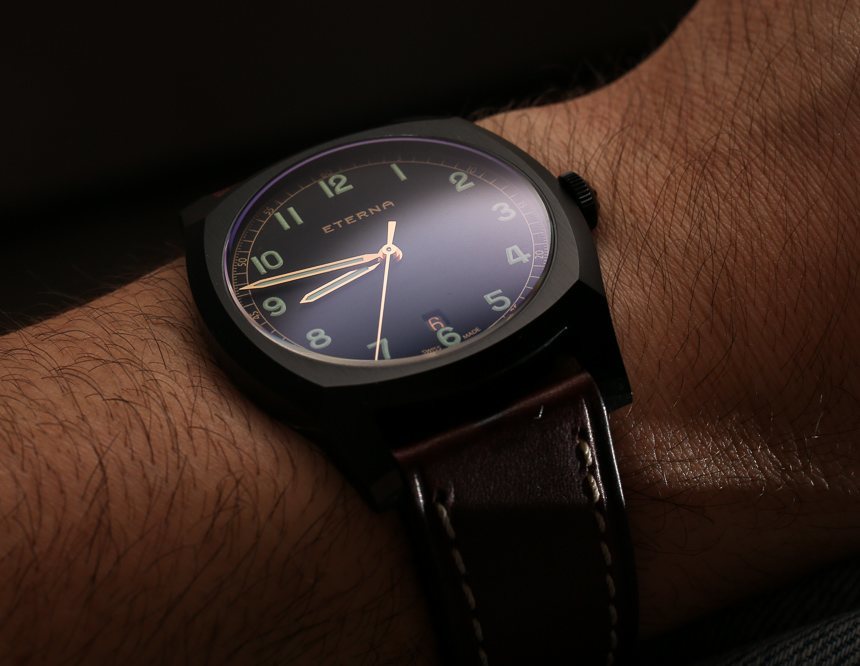 The cushion style steel case is perhaps one of the most desirable as well as distinctive elements of the Eterna Heritage Military watch design – and the new model has a case very similar to that of the original. Eterna wasn’t clear on the size of the 1939 original, but you can imagine it was much smaller than the 40mm wide size of today’s Eterna Heritage Military watch. The case, in steel, is very well finished and the unique angled sections of the bezel look very cool, I must admit.

Eterna will produce two versions of the Heritage Military limited edition watch case. One is in polished and brushed steel which is a more direct analog to the original. The second one is the model I was able to photograph, and it is in a matte PVD black coated steel case. I think either one is probably going to be interesting but admittedly, the PVD clack case is more interesting. The sober finishing of the case mixed with the utilitarian dial feels like something that would have made Eterna proud back in the late 1930s. 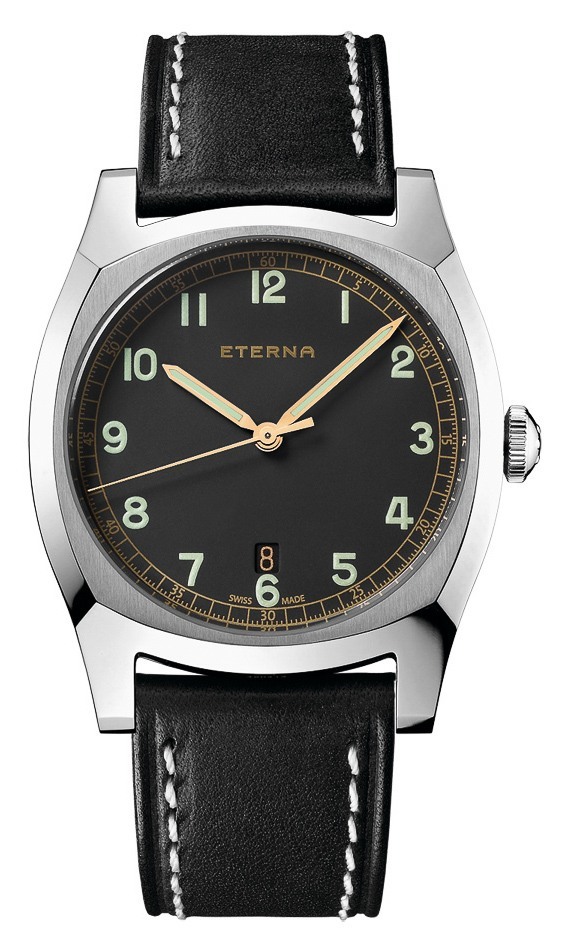 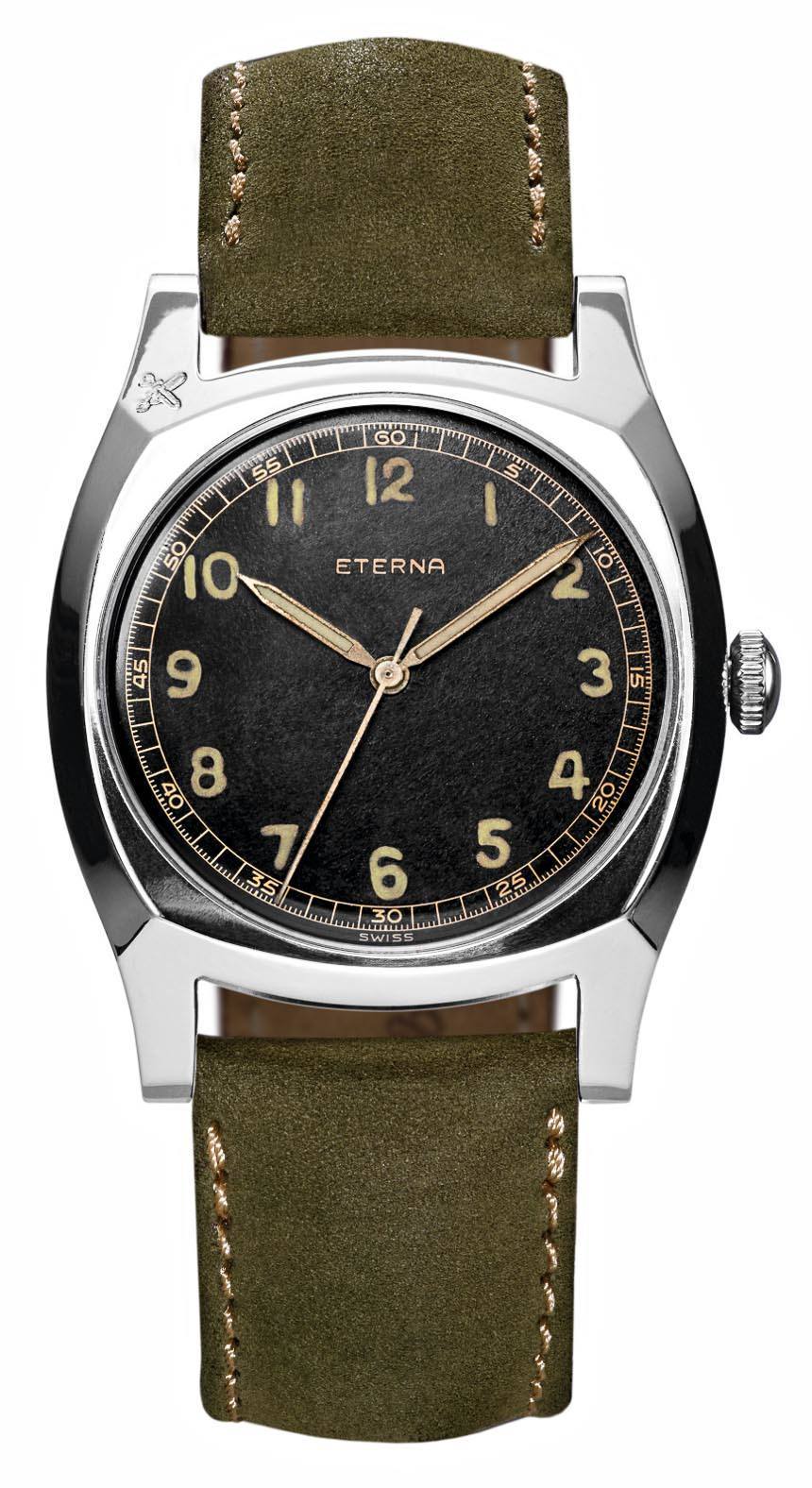 Eterna produced a number of military watches in the 20th century, and many of them are quite different looking. What holds many of them together is a focus on pure legibility and wide open dials – often with similar hand styles. Again, according to Eterna, these specific vintage models were mostly used by the Czechoslovakian air force. To me, they look like little wall clock faces for the wrist.

The dials themselves are very nice overall, albeit perhaps too simple for some tastes. The face itself is matte black and each of the hour markers are Arabic numerals. The luminant – which is used on the hands and hour markers – is purposely very green and should work well in the dark after it has been charged. Even without charge, the dial is very easy to read in poor lighting conditions. 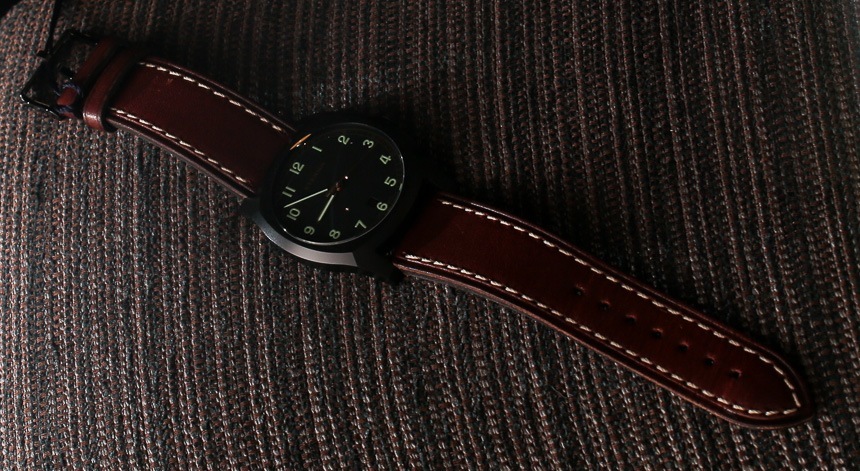