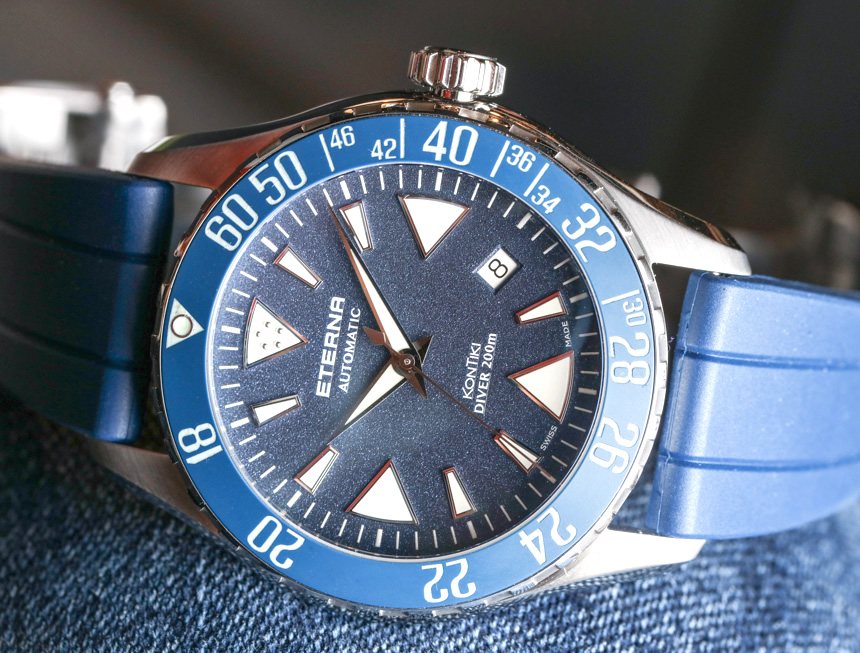 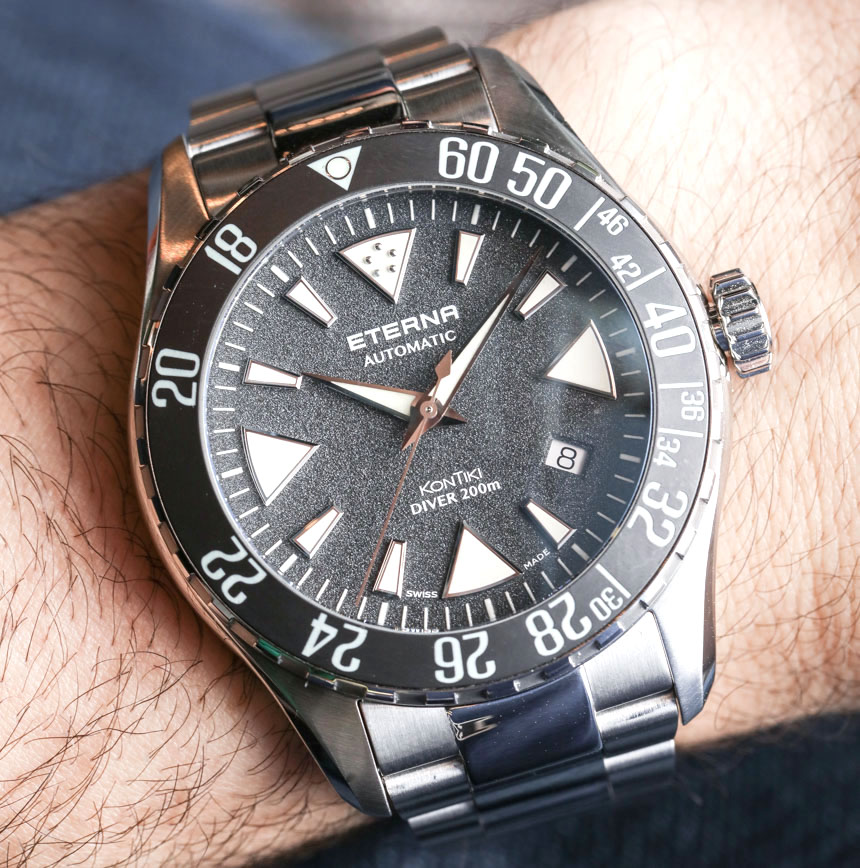 Eterna, Swiss watch manufactures since 1856, have in recent years followed an industry wide trend by complimenting their modern collection with “heritage reissue” pieces, which combine current watchmaking technology with historic design concepts. At Baselworld 2017, Eterna unveiled their new KonTiki Manufacture Bronze in a limited edition as well as a new, non-limited stainless steel KonTiki, which they call the Eterna KonTiki Gent. Eterna indicate that both pieces were designed in order to commemorate the 70th anniversary of Thor Heyerdahl’s 1947 KonTiki expedition in which he and a few pals set sail on a homemade raft from South America to prove the possibility of primitive people engaging in transoceanic migration. Thor’s impressive nautical efforts aside, aBlogtoWatch went hands on with Eterna’s stainless steel KonTiki Gent and found out the new piece has a lot going for it and makes an interesting case for the careful modernization of vintage designs. 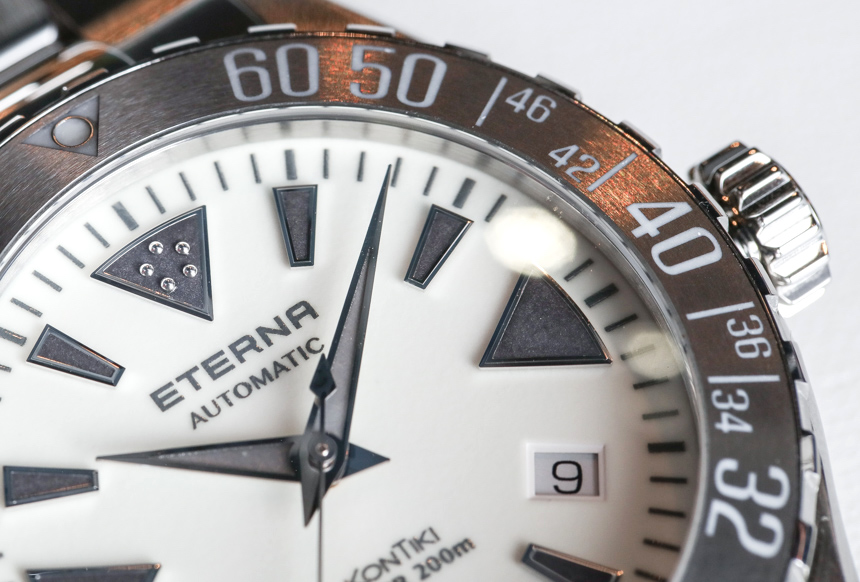 One of the more striking features of the KonTiki Gent is the textured dial. When we first went hands-on with the KonTiki Manufacture Bronze LE, Ariel noted the “granite textured” dark grey dial. With that in mind, I was pleased to find Eterna have carried this design element into their more pedestrian KonTiki lineup in both the blue and black dialed versions with the other model sporting a glossy white dial with contrasting, seldom seen black-lumed hour markers and hands. In all three, the hour markers are Eterna’s signature triangular-ish shape, with especially large triangular indices at noon, three, six, and nine o’clock with the twelve o’clock marker topped with Eterna’s five ball-bearing signature. Dial text is also fairly subdued, with only “Eterna Automatic” and “KonTiki Diver 200m” at twelve and six o’clock respectively. 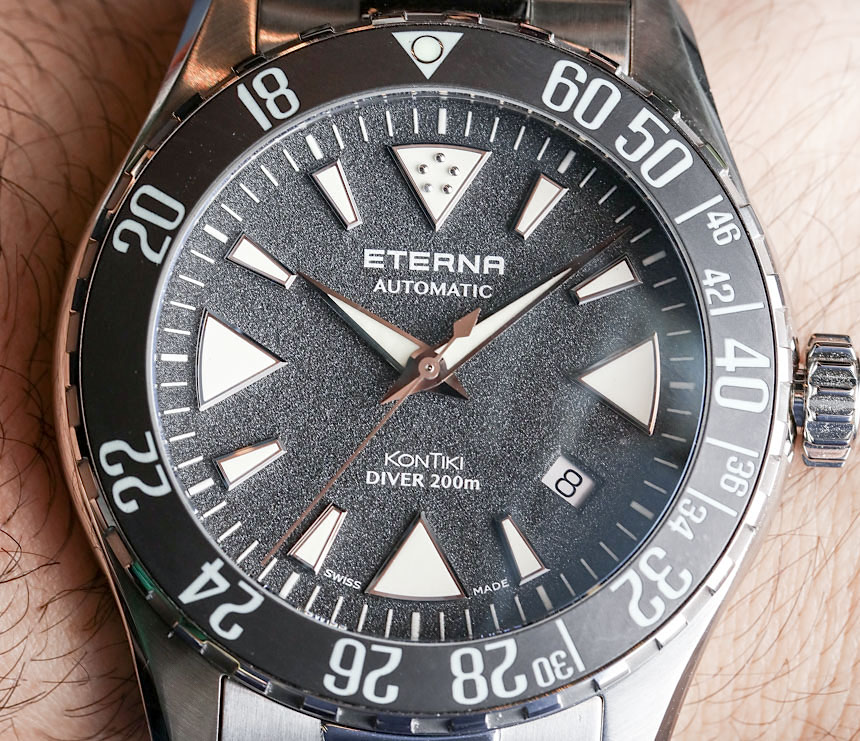 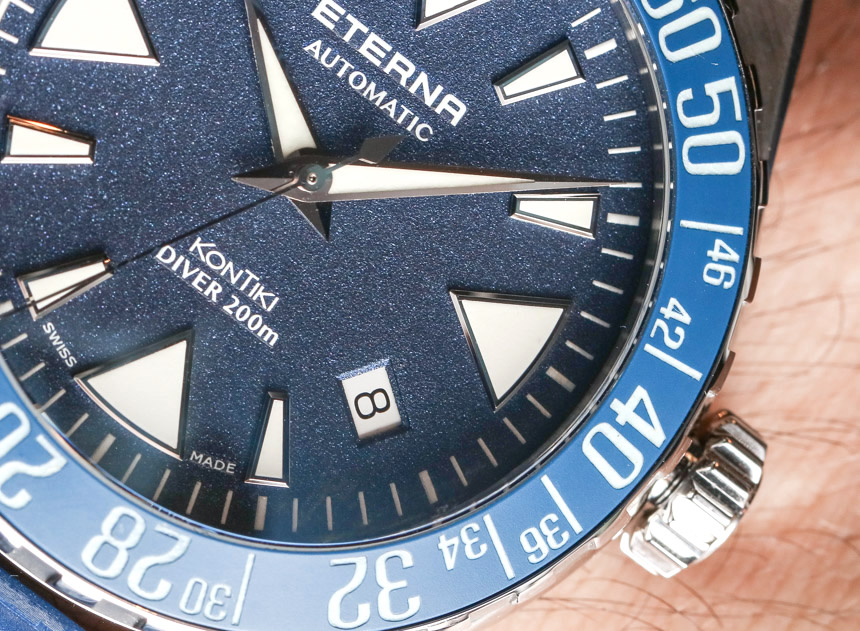 Straightforward sword hands compliment the triangular dial elements and are, along with the hour markers, liberally coated with Super-LumiNova. One thing this design does particularly well is the placement of the date window. It’s easy to miss the mark when placing a date window anywhere other than the traditional three or six o’clock positions but on the Eterna KonTiki Gent, the date window’s four o’clock position perfectly compliments the rest of the dial’s well-planned elements. This dial design does a couple of things at the same time. For one, it faithfully reproduces certain elements from KonTiki watches of yesteryear to cement the piece in the heritage realm. However, by playing around with texture, dimension, and color, the dial on the KonTiki Gent hangs right in there with the modern watch world. 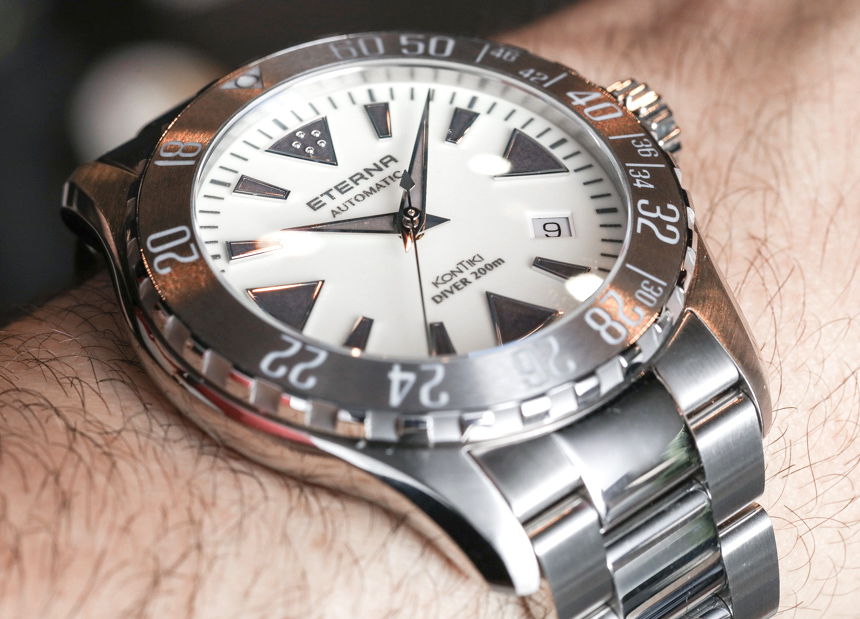 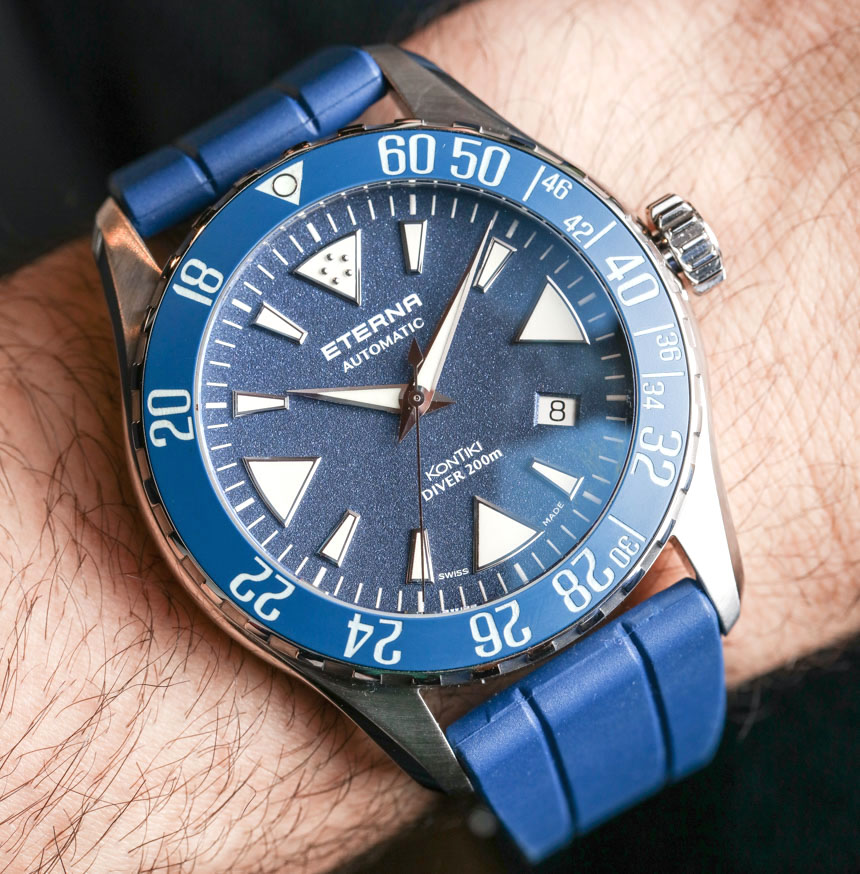 Differentiating itself again from its bronze relative, the Eterna KonTiki Gent’s case is stainless steel and 44mm in width and 12.2mm thick compared to the bronze version’s heftier 14.5mm thickness. Case finishing on the Gent is somewhat standard, with brushed and polished surfaces adding interest to the otherwise fairly predictable case shape. The bezel is, at least in shape, everything a tool diver’s watch should be. Thick and rimmed with deeply machined teeth, the bezel sports a ceramic inlay insert with US Navy no decompression figures represented in meters of depth, an odd move considering their limited utility in a world of almost universal dive computer use. 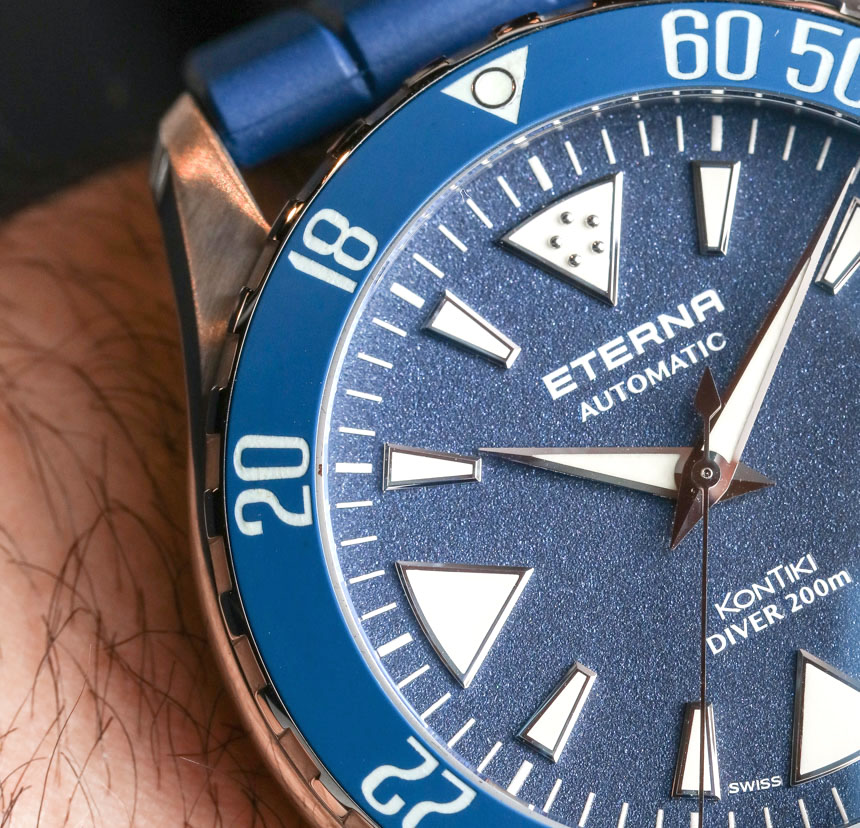 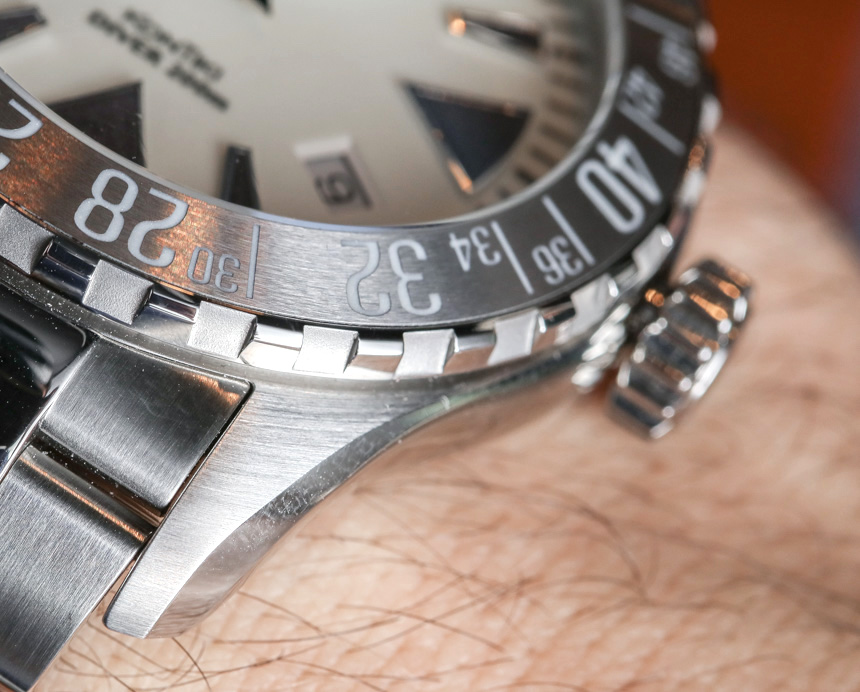 Although this bezel looks interesting, the use of a standard diver’s elapsed time bezel would have at least helped with the random, mostly topside timekeeping tasks the majority of these (and indeed most diver’s watches) end up timing these days. Doxa, for example, who have long used an easily understood no decompression scale on their bezels, also include an elapsed time scale for general or diving use. 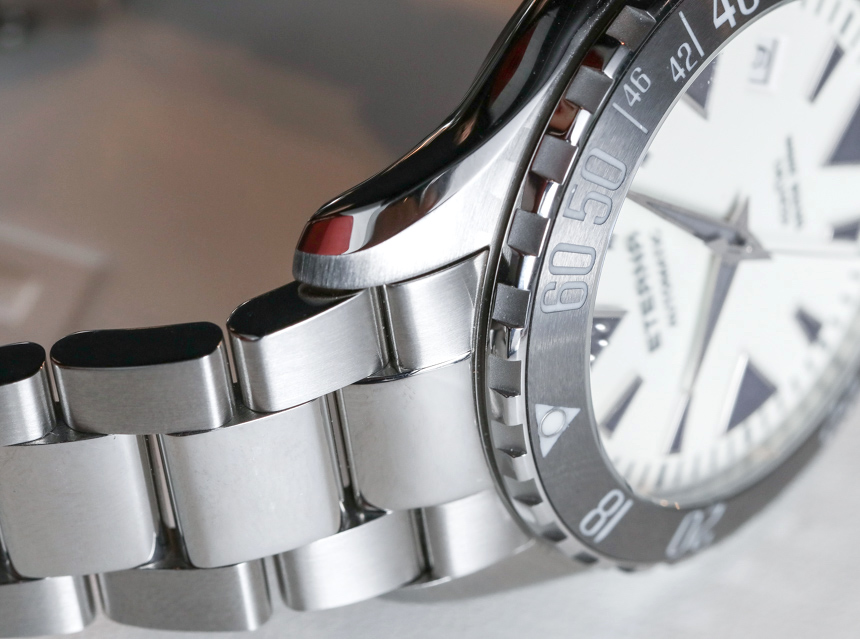 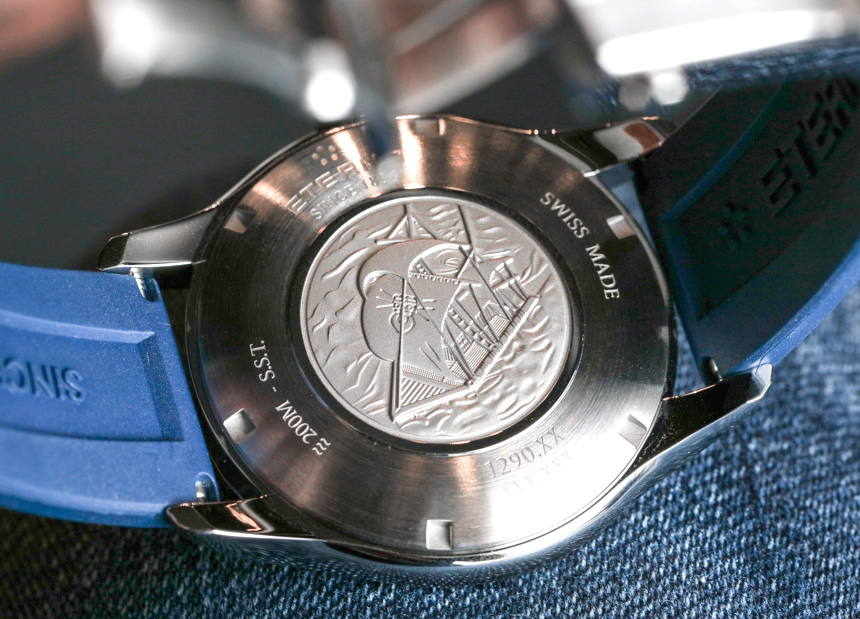 With all that being said, a ceramic insert on a Swiss watch at this price point is still something to be lauded and the bezel as a whole is visually well executed. An oversized crown, also engraved with the five ball bearing motif, sits without crown guards at the traditional three o’clock position. An anti-reflective coated sapphire crystal provides for easy viewing of the dial and the movement is safe underneath an excellent, deeply engraved caseback which is emblazoned with an image of the KonTiki, Thor Heyerdahl’s homemade sailing vessel. This is another big difference from the Bronze version which, had the exhibition caseback. 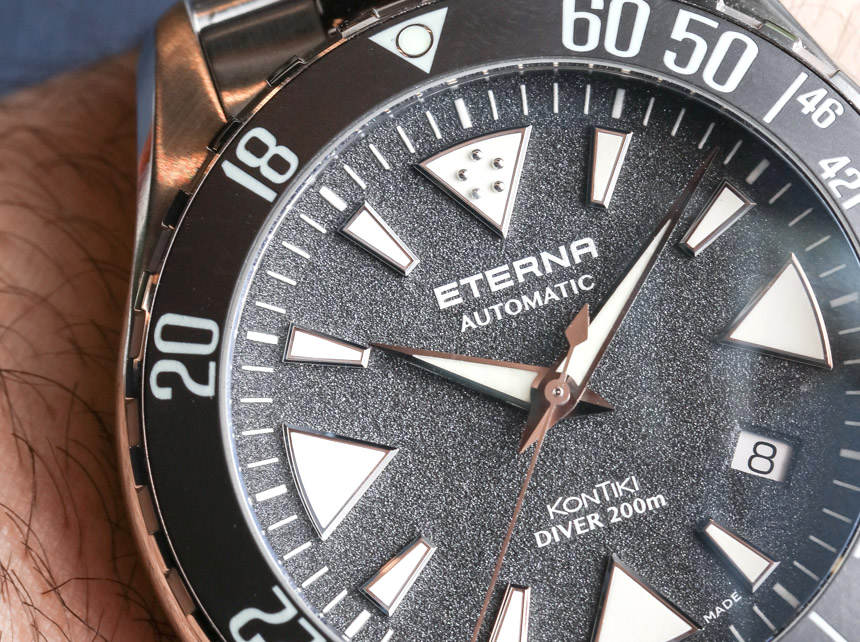 As you might expect for a Swiss watch in this price range, the KonTiki Gent is equipped with the near-ubiquitous SW200 from Sellita. This automatic, 25 jewel, 42 hour power reserve, 28,800bph caliber is essentially the exact same thing as the other most often seen Swiss automatic, the ETA 2824. While this is for all intents and purposes a highly capable, accurate, and dependable movement, it isn’t anything that’ll cause heart murmurs among watch nerds, especially when the limited edition bronze version of this watch comes with a manufacture caliber, albeit for about one thousand more of your hard-earned dollars. 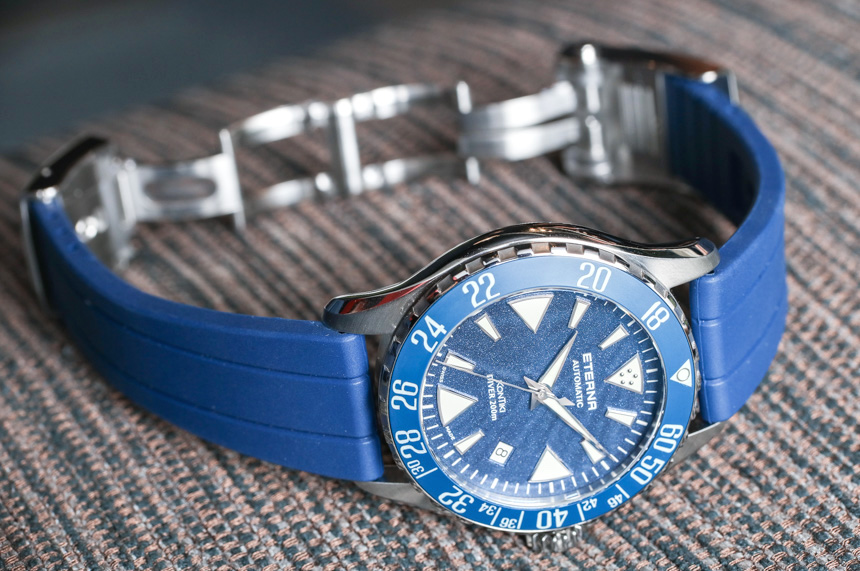 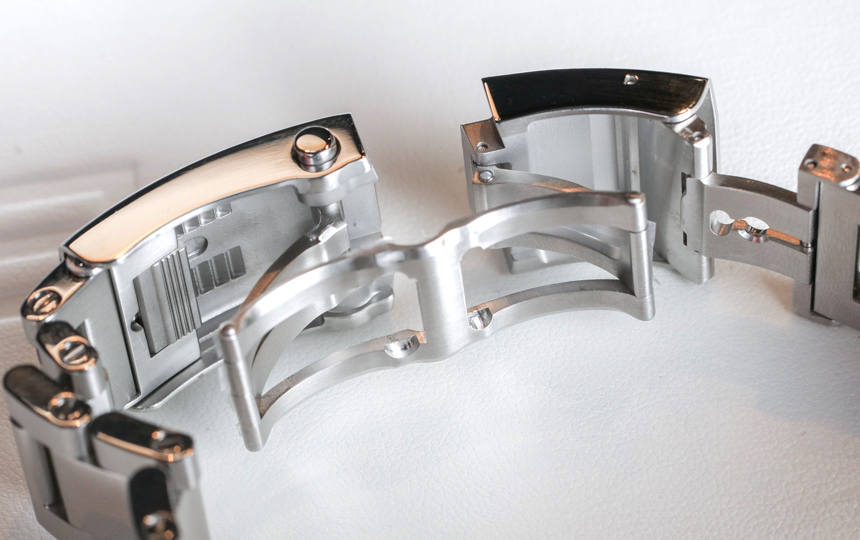 An area where Eterna have done more than you’d imagine with a watch around the $2,000 mark is with the straps and bracelets. The KonTiki Gent will come with either a stainless steel bracelet with a totally over-engineered and very cool deployant clasp or on a color matched natural rubber strap, which makes use of the same clasp. The only holdup I have regarding the bracelet is the use of polished center links which lend the watch a more boardroom appearance but do take away from the tool watch concept. Polished center links also attract scratches faster than a sisal wrapped post at a Petsmart. Given the extreme length of the deployment clasp, I also can’t help but wonder whether this clasp will give the very small-wristed some challenges. 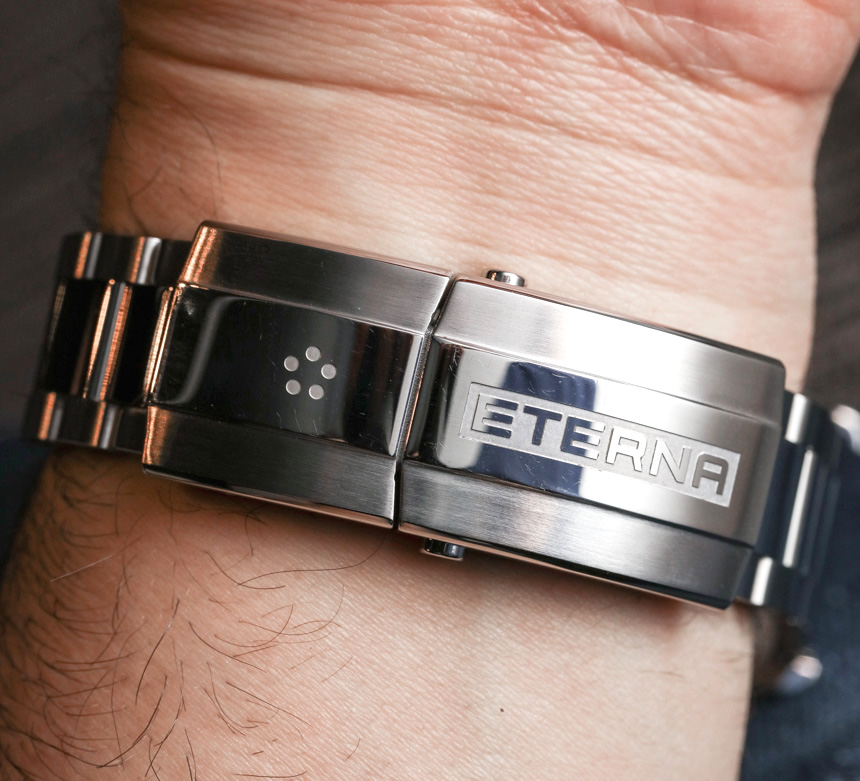 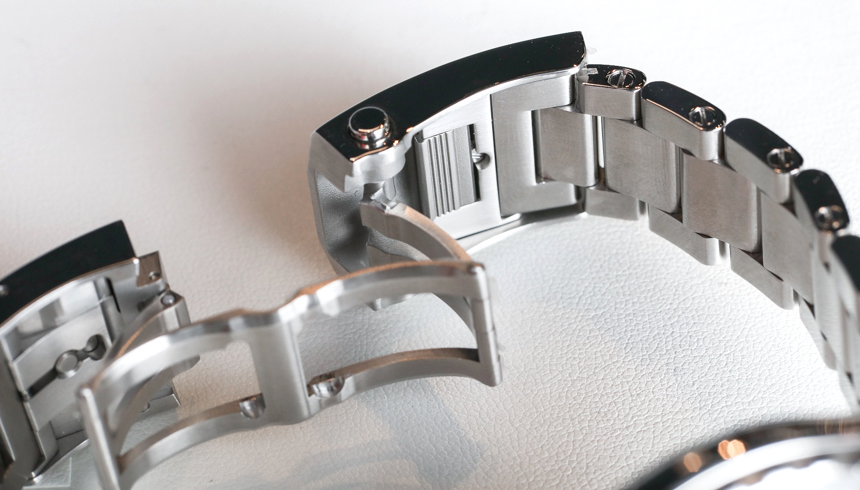 Viewed in concert, Eterna have once again created a solid value proposition with the KonTiki Gent. Though the movement is a decidedly off the shelf Sellita, the rest of the watch makes up for it with an appealing design that neatly integrates a lot of Eterna’s design DNA. My only other holdup is the decision to use the no decompression limits on the bezel as opposed to a traditional elapsed time scale. However, the no decompression bezel is something signature for Eterna divers and if we’re being honest, very few people will take this thing diving anyway. 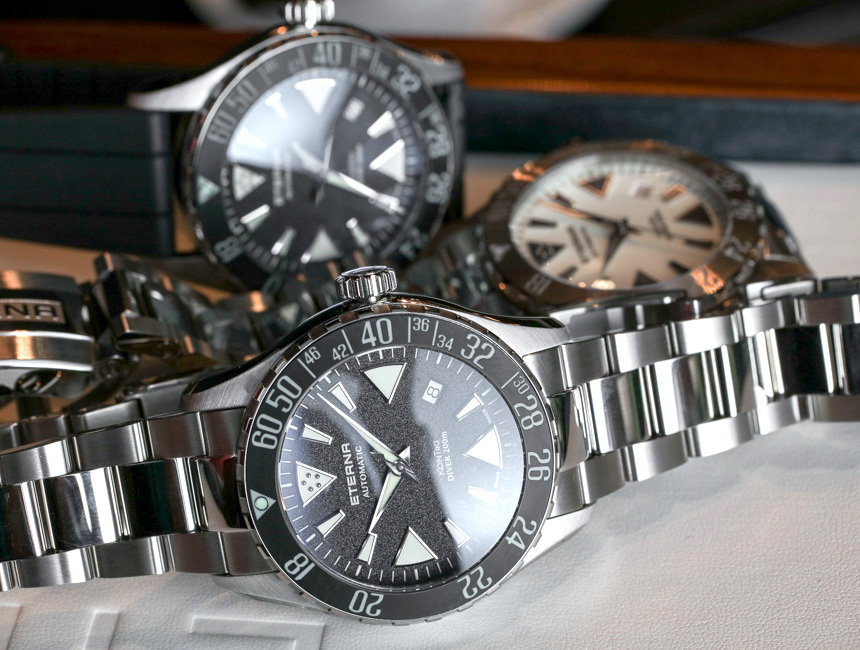 For me, this Eterna is built in the vane of the also excellent Tudor Black Bay, given the design concept of building a totally modern watch with a series of well-loved elements from several of the brand’s historic pieces. The Eterna KonTiki Gent Divers should be available soon priced at just around $2,000. eterna.com