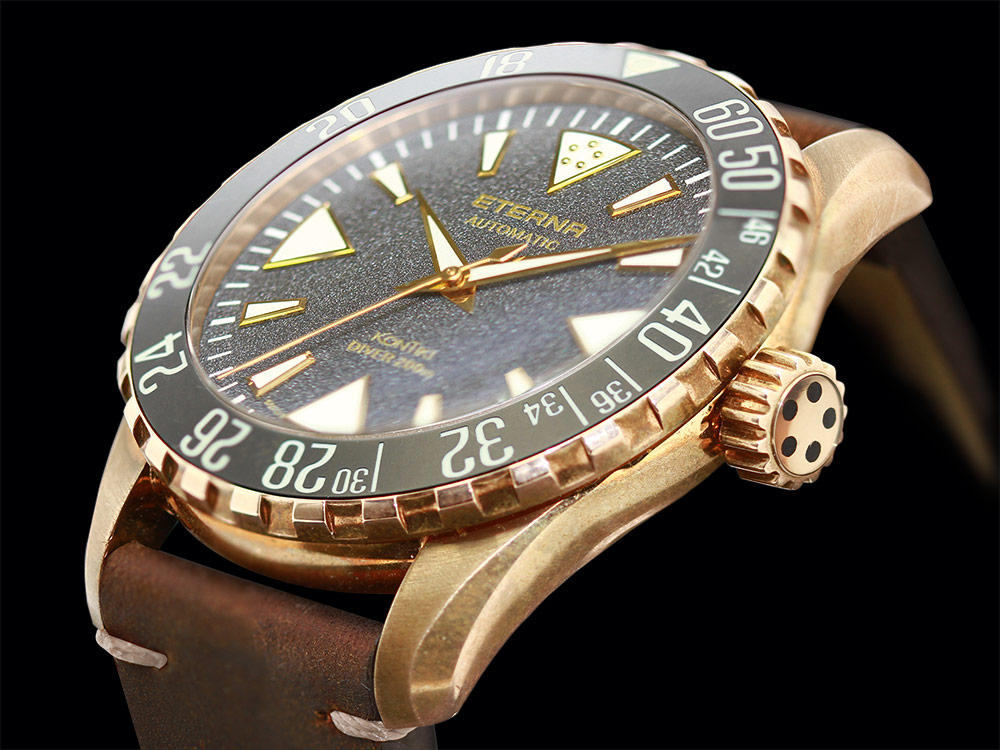 As we creep ever-closer to Baselworld 2017, the numbers of brands without a bronze watch in their catalog continue to dwindle. The latest to lose its bronze virginity is Eterna, whose KonTiki Bronze Manufacture watch celebrates the 70th anniversary of Norwegian adventurer Thor Heyerdahl’s 5,000-mile trek across the Pacific Ocean in 1947 aboard a handbuilt raft named the “KonTiki.” On his wrist? An Eterna watch. 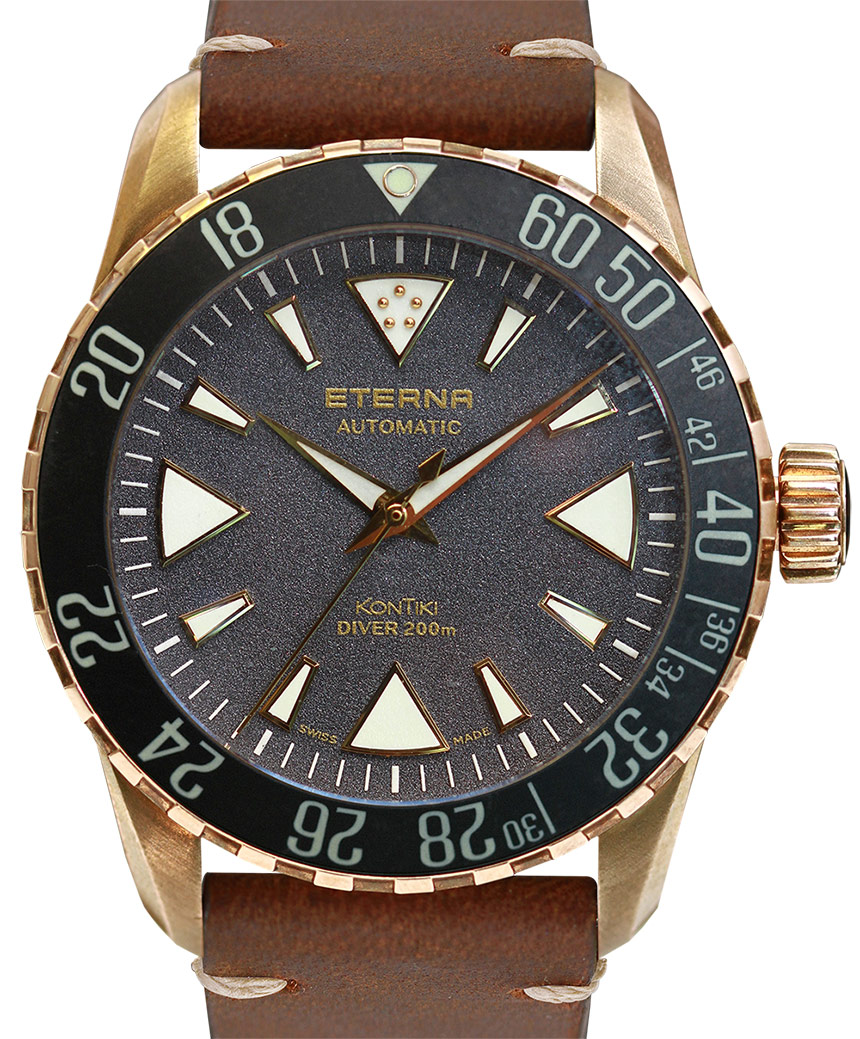 As the story goes, Heyerdahl and his crew were equipped with a radio and six Eterna watches – everything else on the expedition was to be fully handmade by the explorers themselves to prove the theory that Polynesia could have been colonized by early aboriginal travelers who sailed from South America. Though the new Eterna KonTiki Bronze Manufacture shares only the seafaring spirit of those original Eterna watches, it’s still a pretty neat story, commemorated by an equally interesting 3-handed diver – if you can look past the “me-too” adoption of the bronze trend in watchmaking. 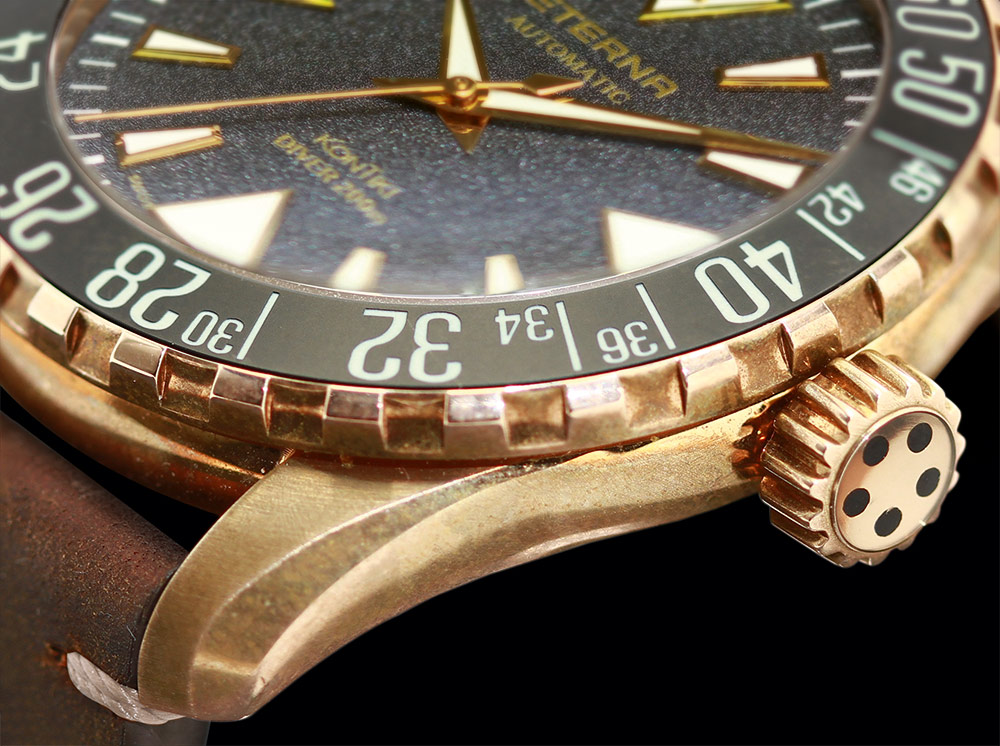 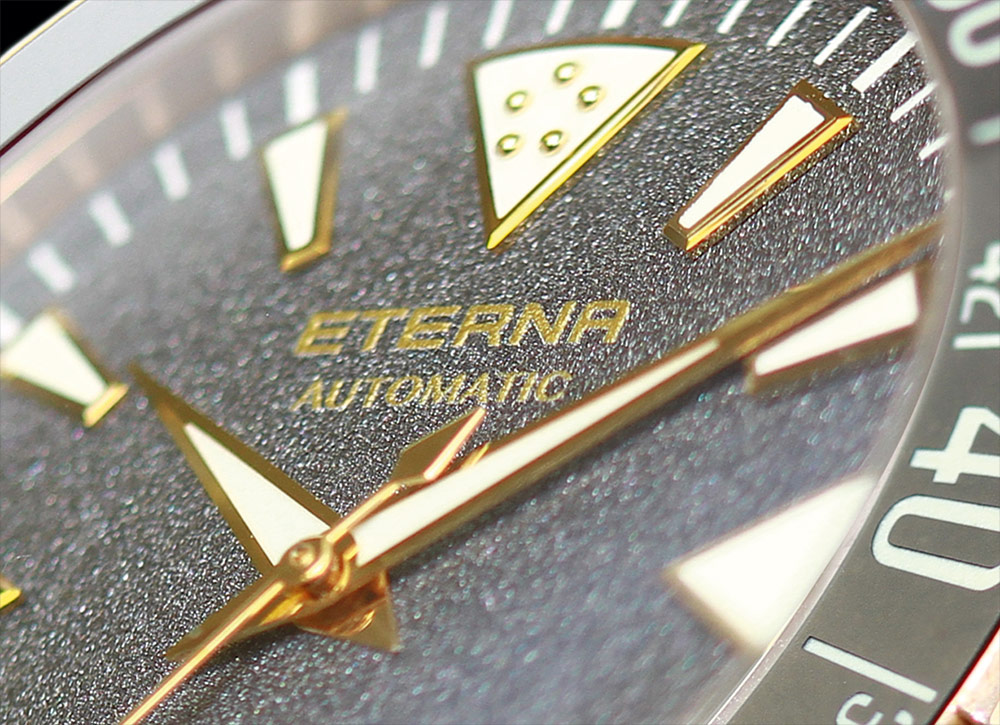 But thankfully, the Eterna KonTiki Bronze Manufacture is more than just a trendy case that’ll develop the now-familiar weathered patina, unique to its wearer over time. The 44mm- by 14mm-thick watch is powered by the in-house produced Calibre 3902A, a 30-jewel, 28,800vph automatic movement with a generous 65-hour power reserve. And if you remember, Eterna cut its teeth as a leading movement supplier to the rest of the Swiss watch industry long before the quartz crisis – a success story that would lead the brand to create its own ébauche division, called ETA, whose original innovations and movements have formed the backbone of the hobby we continue to enjoy to this day. 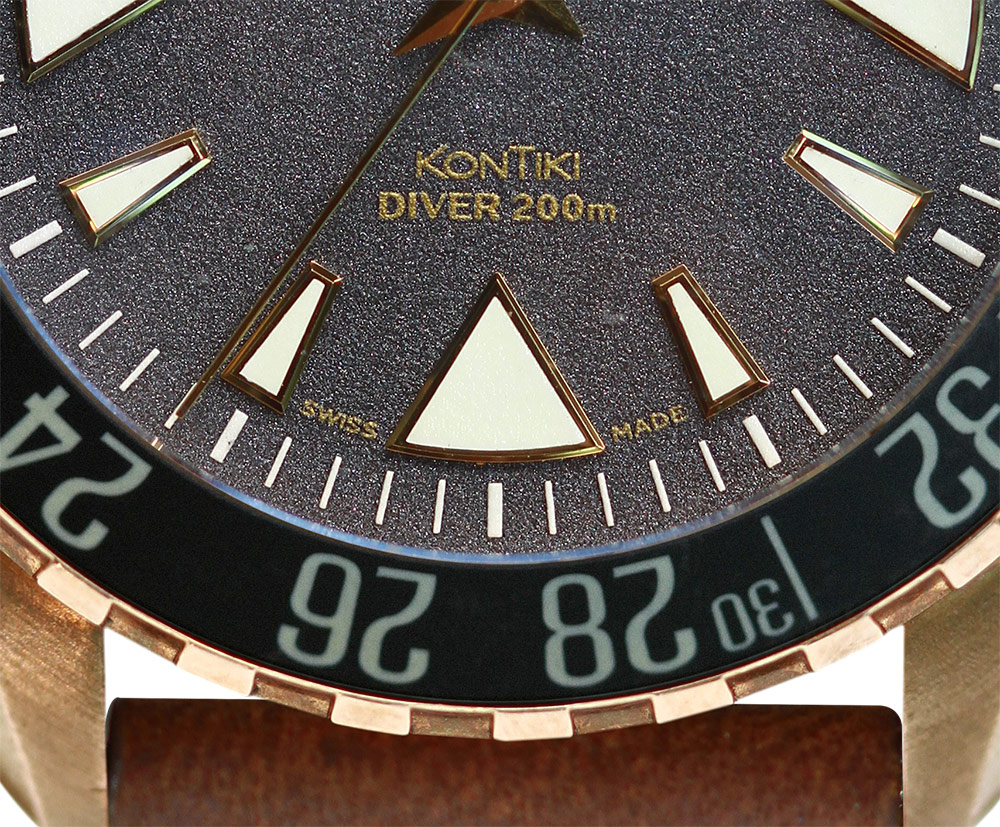 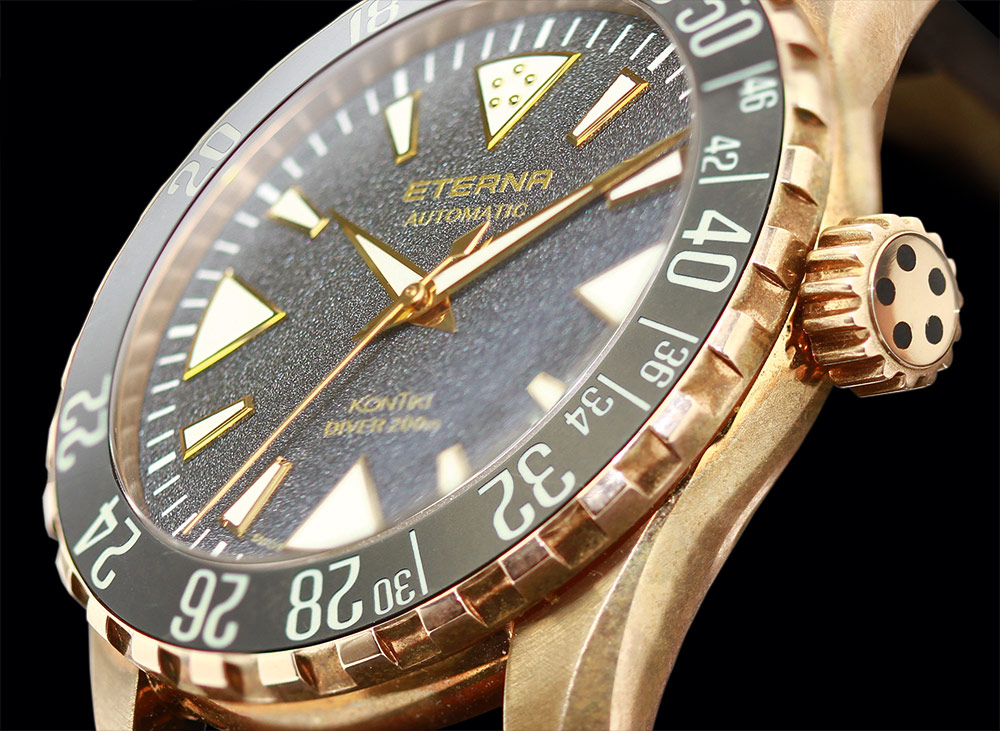 The dial of the Eterna KonTiki Bronze Manufacture follows the signature capability and design cues of the KonTiki, which include 200 meters of water resistance and a clean symmetrical presentation in its no-date layout. Set against a textured granite-patterned dial, the luminous triangular “pizza slice” indices are likely to be divisive for some, but they’re a signature for the KonTiki through the years, and work especially well here when applied in an alloy that matches the bronze case. The dial is capped by its 12:00 indice with Eterna’s ball bearing logo which represents the brand’s 1948 innovation called the Eterna-Matic – an automatic movement powered by a rotor that turned on five ball bearings. Eterna caps this KonTiki off with a ceramic bezel that carries a simple decompression scale for divers – rudimentary by even DOXA’s standards, but neat nonetheless. 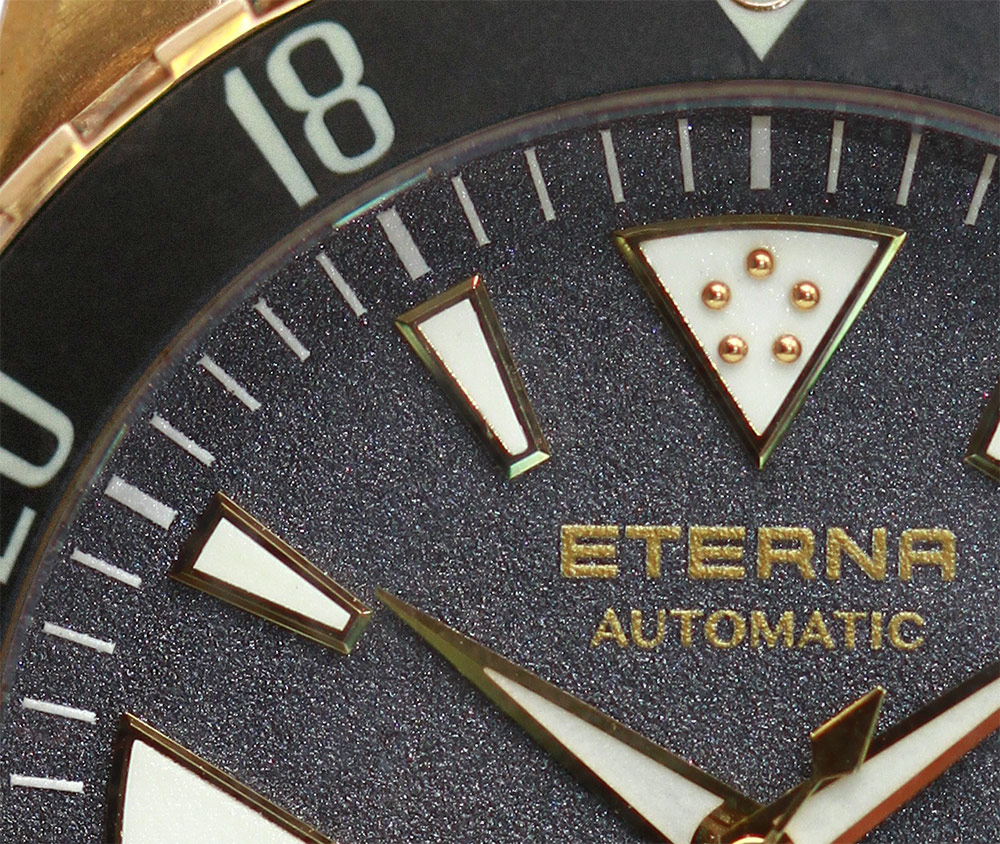 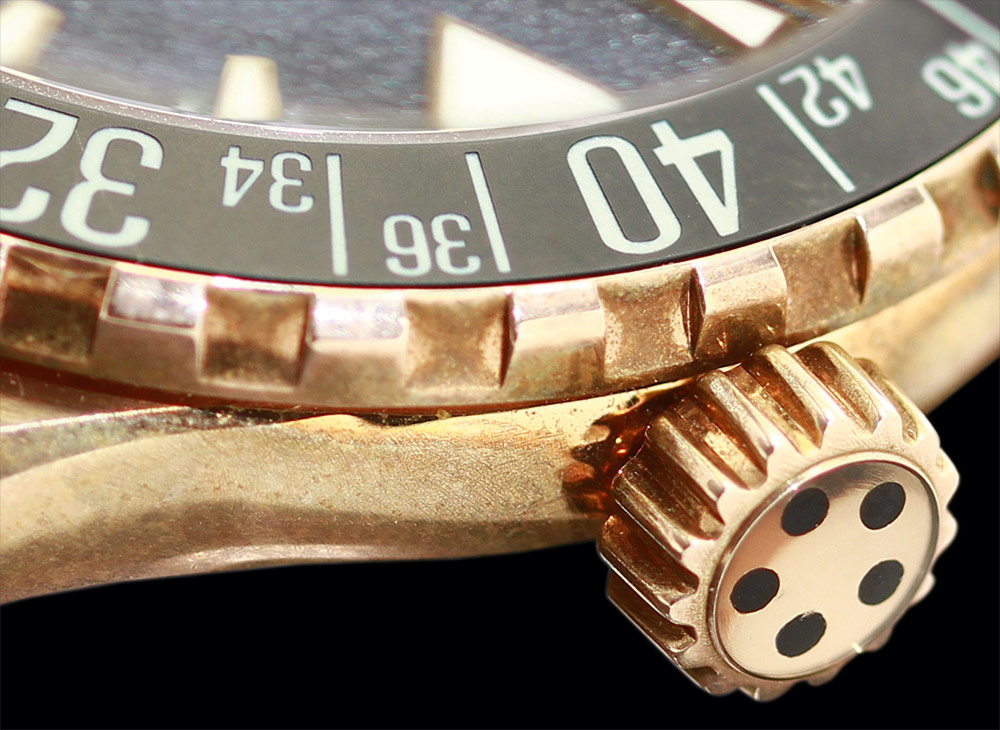 The Eterna KonTiki Bronze Manufacture watch will be fitted with a brown, waterproof leather strap and produced in a limited run of only 300 pieces, each carrying a price of $2,650. eterna.com