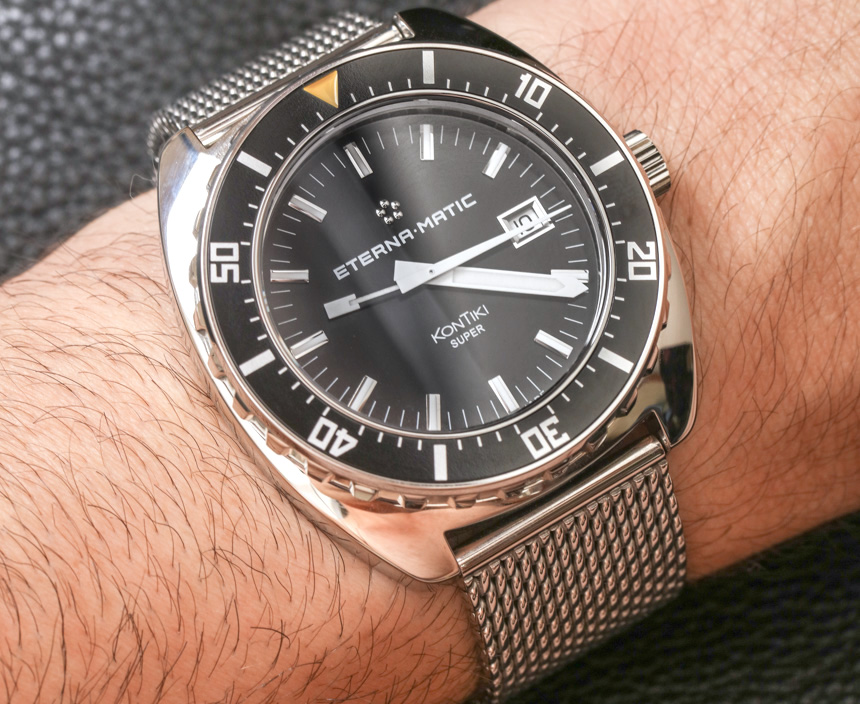 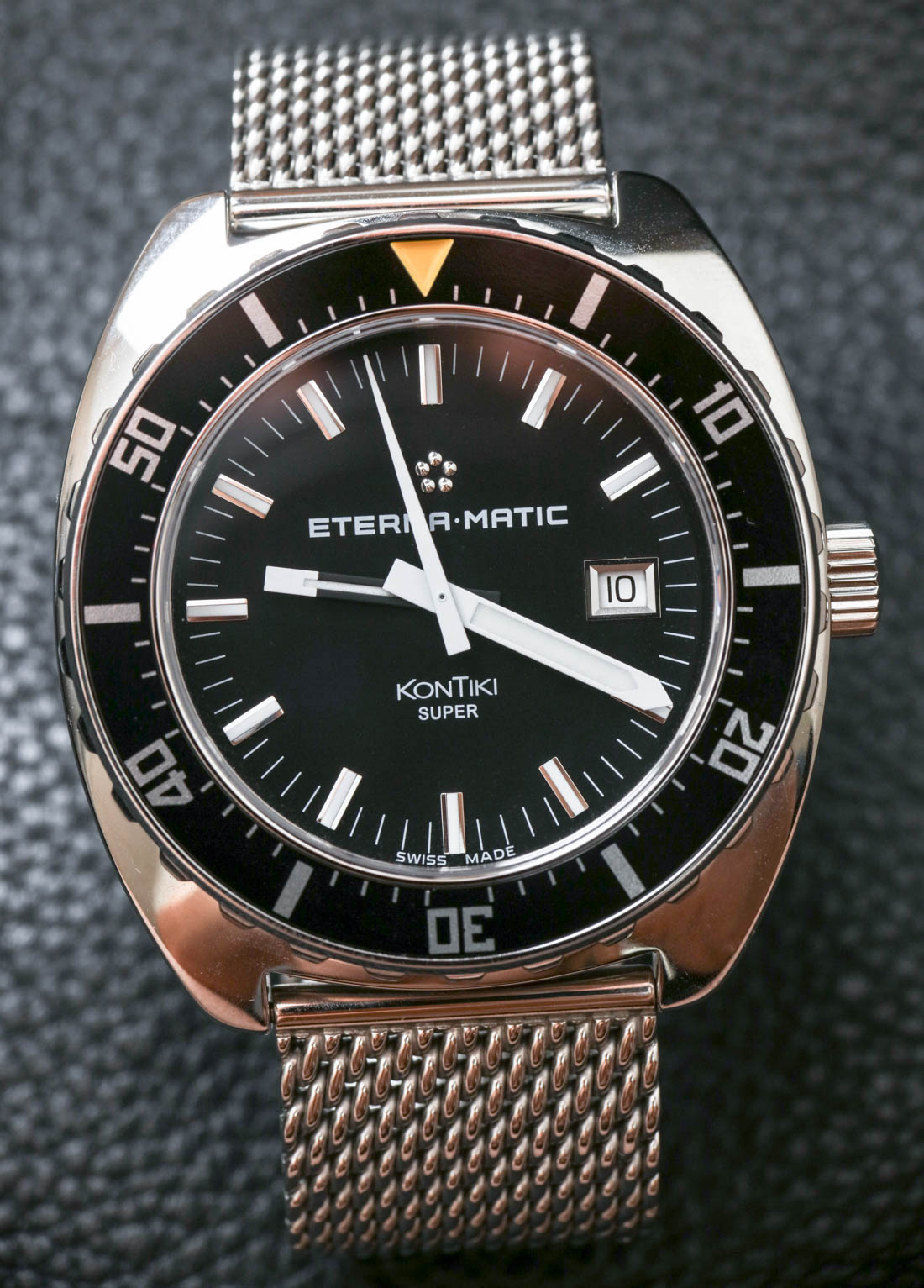 “War is hell, and so is Baselworld” is something the aBlogtoWatch team likes to chuckle at during our annual deployment to the world’s biggest watch and jewelry show in Basel, Switzerland. The Eterna Heritage Super KonTiki 1973 Limited Edition “The War of Baselworld 2016” watches we had made for ABTW team members are a play on that idea. I’ll explain. Most people who are regulars at this more than week-long trade show event agree that it isn’t exactly the most comfortable experience. The historic and quaint city of Basel in the German-speaking region of Switzerland is a fairly pleasant and relaxed place to be until thousands of luxury industry buyers, sellers, reporters, and producers swarm into too few hotel rooms and facilities. 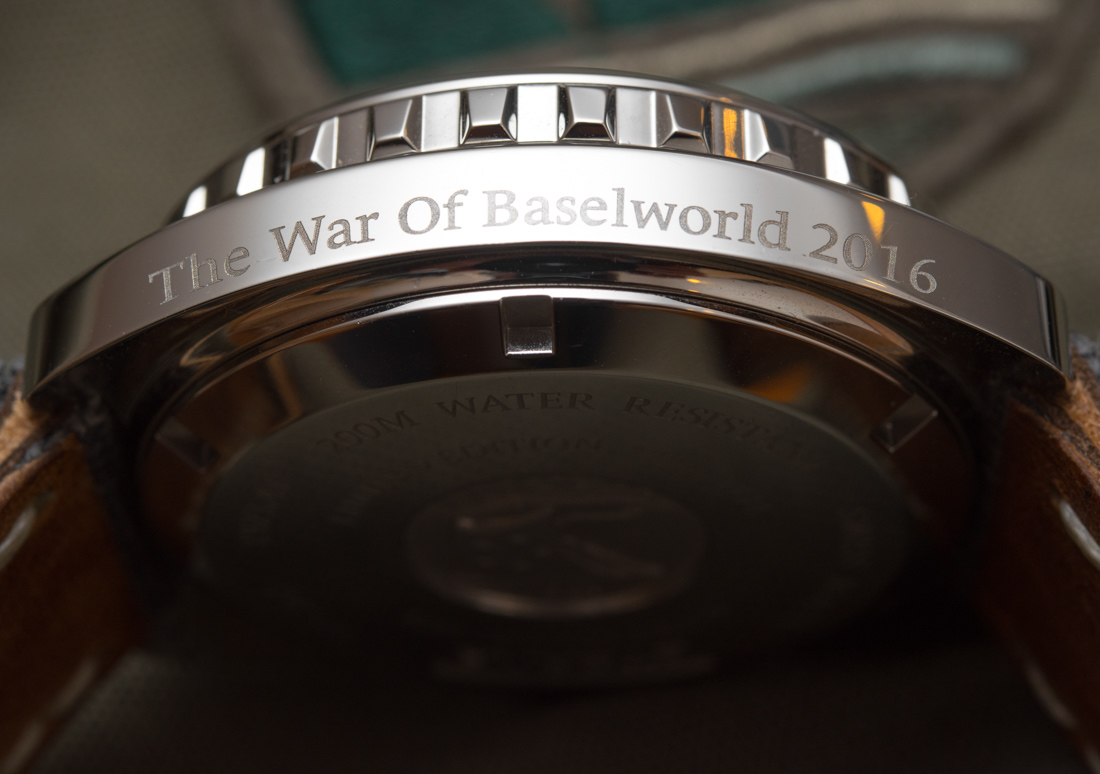 Squad aBlogtoWatch doesn’t so much attend Baselworld, as we fight through it. Thus, we like to musingly refer to each instance of the important event as “Baselwar” (we also like to say “Basel tov” when feeling cheery). The most difficult question to answer while at the event is… “what time is it?” Sound odd? What else do you expect in a place with tens of thousands of watches all set to different times… if they are running at all. 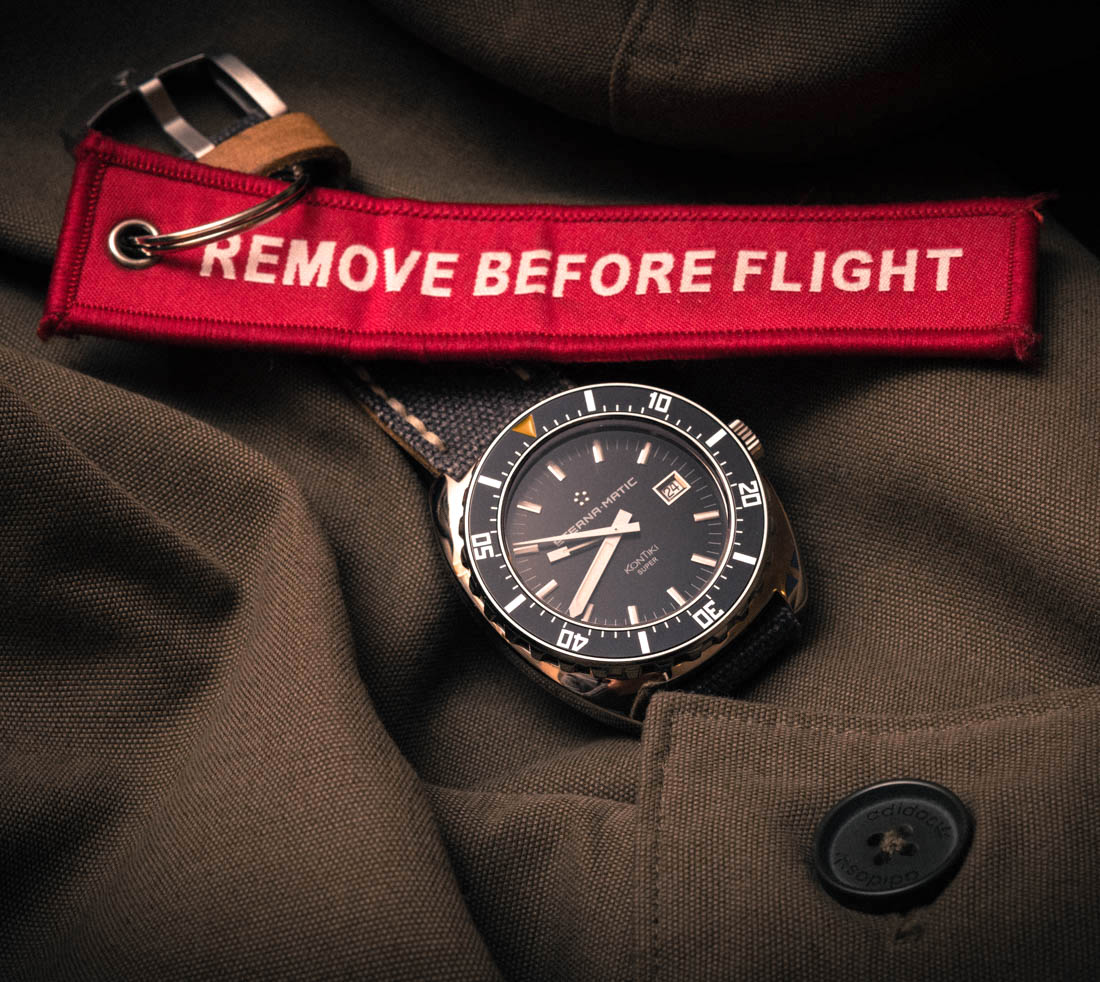 Now, I don’t mean to complain so much as I intend to illustrate some of the more active elements of being a watch blogger. I can say for sure that each Baselworld experience is, if nothing else, a glorious bonding experience for our team. Shared suffering (lack of sleep, exposure to international germs, human road blocks, booth attendants, Swiss internet, heavy packs, cosmetically unphotographable prototype watches, luxury snootiness, and 17-hour work days) will always make people who endure it together closer as companions. Thus, at the end of each Baselworld event, I try to do something nice for our team members who went through it together. For 2016, we finally got some watches made, and they are pretty badass. 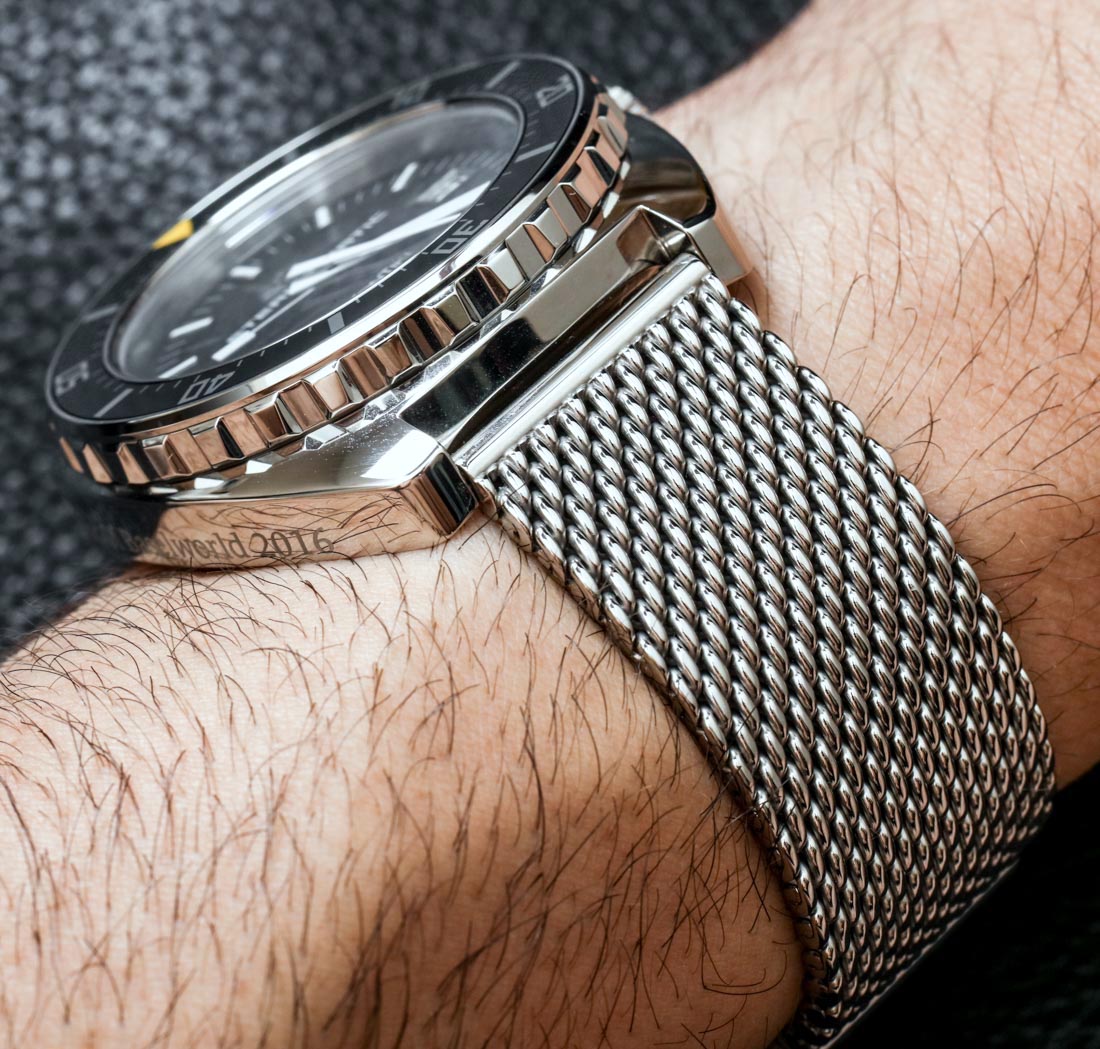 The above text is actually a long way of helping to explain the “joke” that we applied to the timepieces. Working with Swiss watch maker Eterna that we greatly admire, we made a set of unique, limited-edition Eterna Heritage Super KonTiki 1973 watches that were originally released in 2010. I had personally been wanting one of these ever since they came out. They were a re-release of a model from 1973, which had fame in being a timepiece that was officially issued to members of the IDF (Israeli Defense Force). 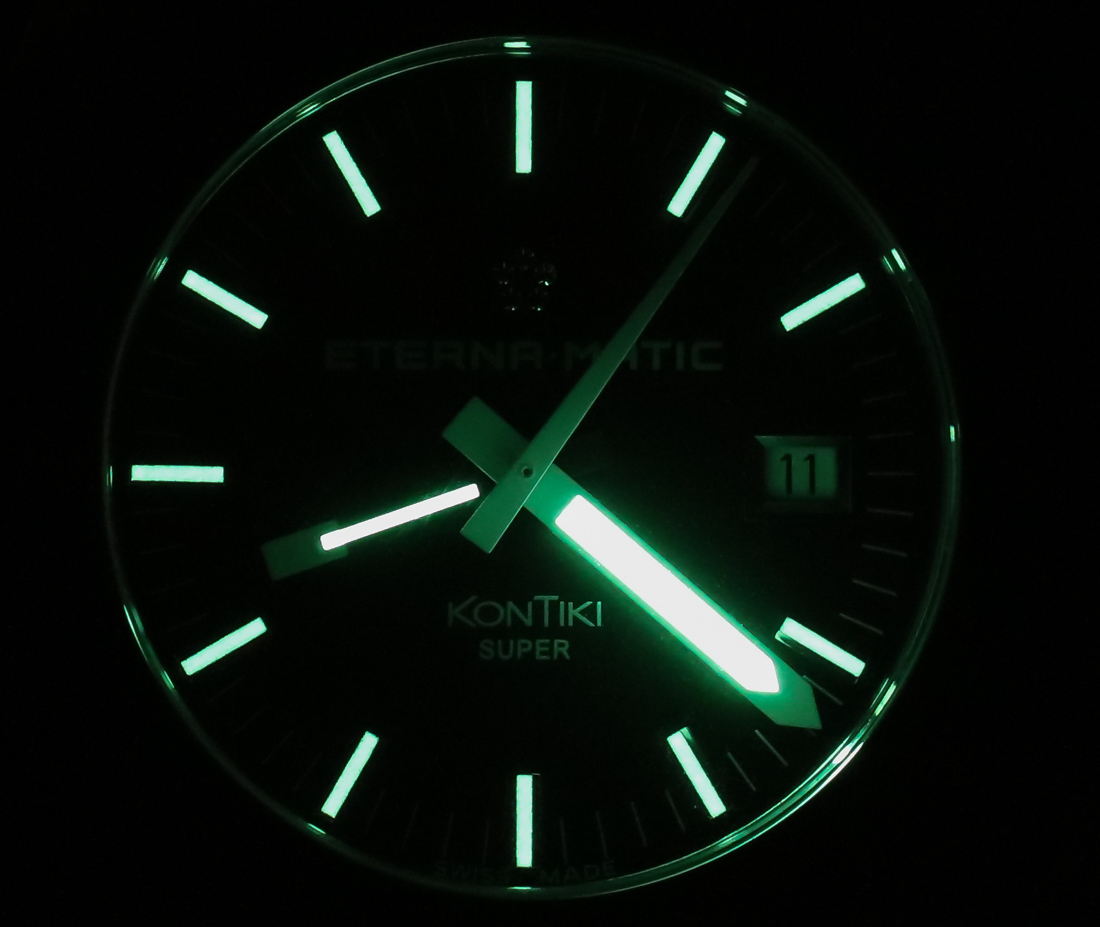 Some of these vintage models are still around, in the hands of enthusiastic collectors. I had an opportunity to buy one for around $6,000, complete with the markings on the rear in Hebrew of the elite soldier that the watch was given to. I passed it up, sadly, not having the extra cash at the time, and knowing that it would, unfortunately, just sit safe in a box. Besides, what right do I have to wear someone else’s war story when I had my own – figuratively speaking, that is, with great respect to those who put lives on the line in actual world conflicts. 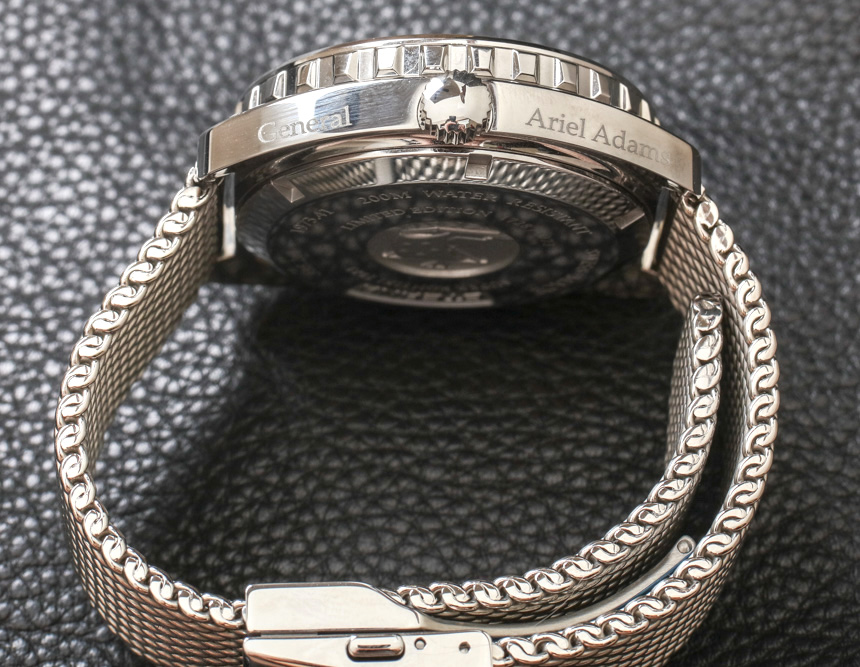 It thus brought me great joy to have some special versions of the Eterna Heritage Super KonTiki 1973 Limited Edition watch made for the battle-hardened warriors of aBlogtoWatch who fight with gusto to bring watch democracy and horological freedom to the world. What we did first is have Eterna engrave “The War Of Baselworld 2016” on one side of the case. On the other side of the case, we personalized each of the watches for the respective team member who got it, complete with their preferred choice of faux military title. Some members even chose to have their “rank” written in Hebrew, in tribute to the watch’s background. I was nominated to be “General Ariel Adams,” an honor that I could not refuse. 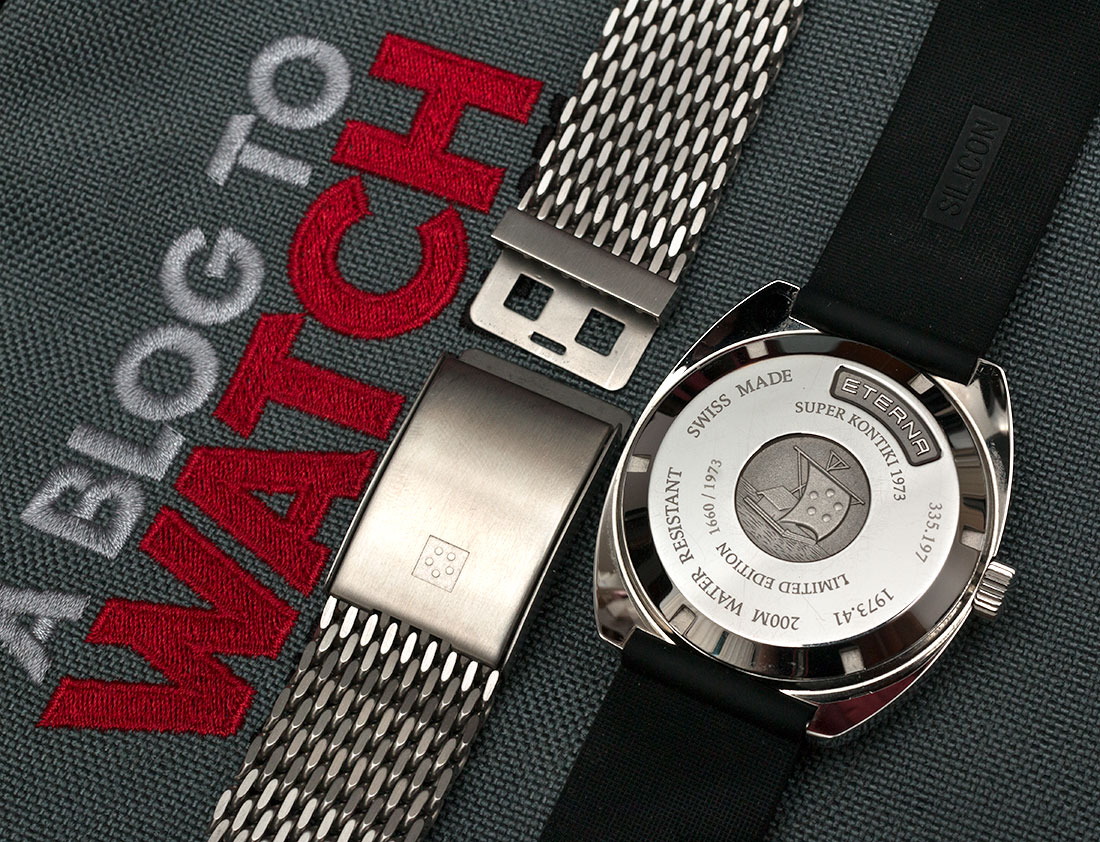 Eterna supplied the Heritage Super KonTiki 1973 with a very authentic vintage-style mesh metal bracelet which is… well, difficult to size. Each of our team members chose to wear their Eterna differently, but I actually decided to use a different mesh metal bracelet also from Eterna, but that came with a newer model. I borrowed the bracelet from the Eterna Super KonTiki Date watch (aBlogtoWatch review here). At a glance these watches are very similar. Indeed both of these Super KonTiki models come in 200m water-resistant, 44mm-wide polished steel cases and have similar color themes. 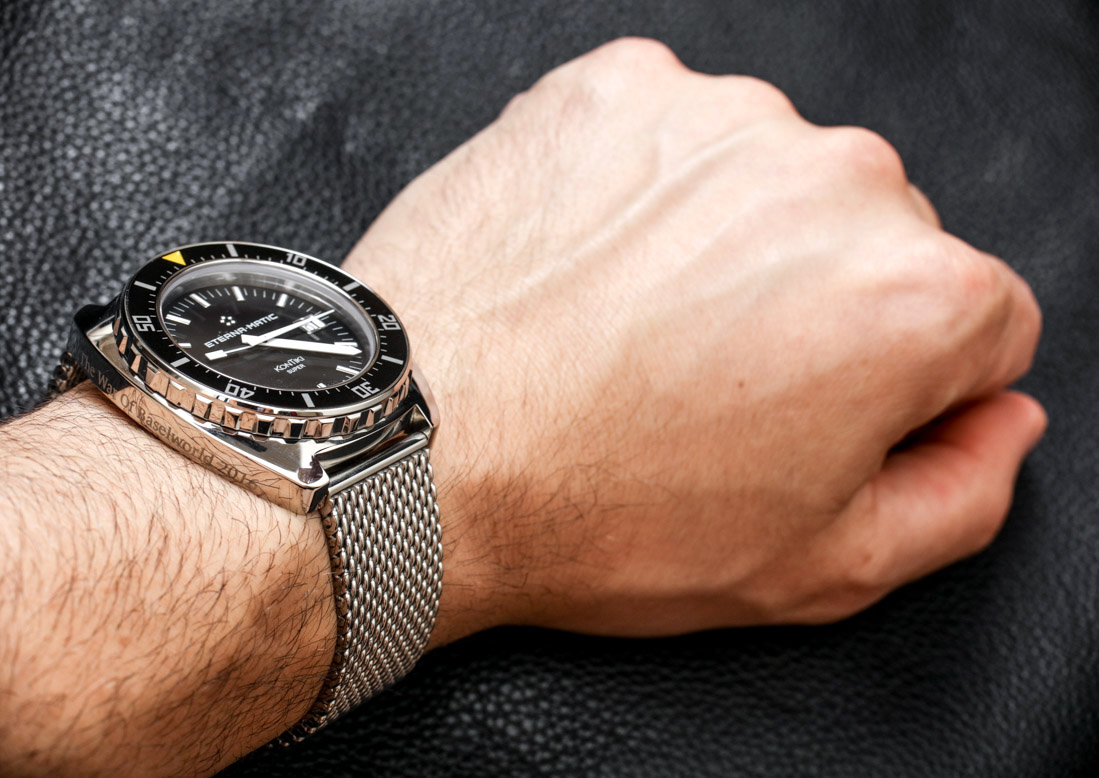 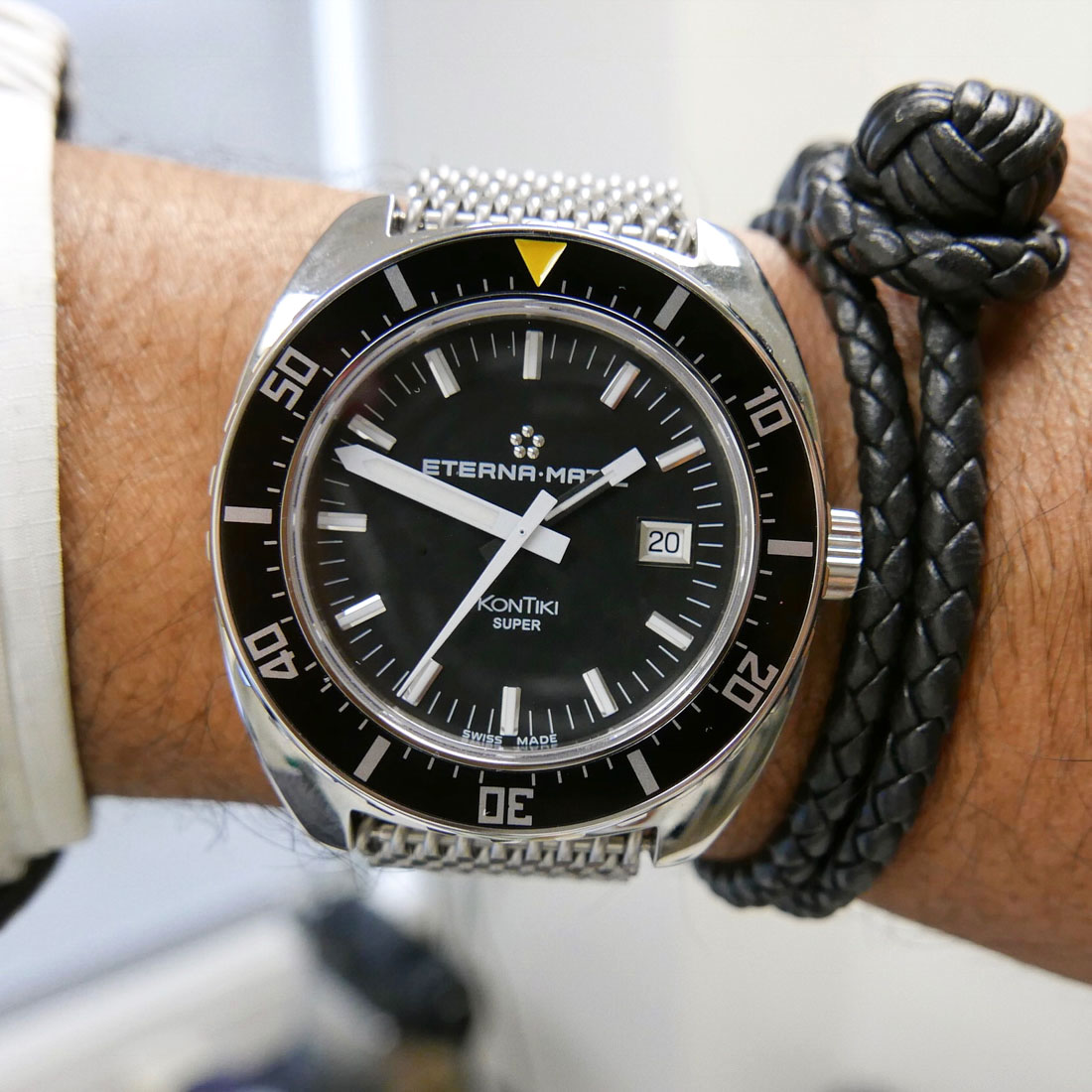 Interestingly enough, the cases are not exactly the same but actually differ in minor ways in terms of shape and dimensions. One difference, for example, is the length of the lugs. I say all this to simply point out that Eterna isn’t just using the same case and a new dial/bezel for these newer non-limited-edition versions of the Super KonTiki. 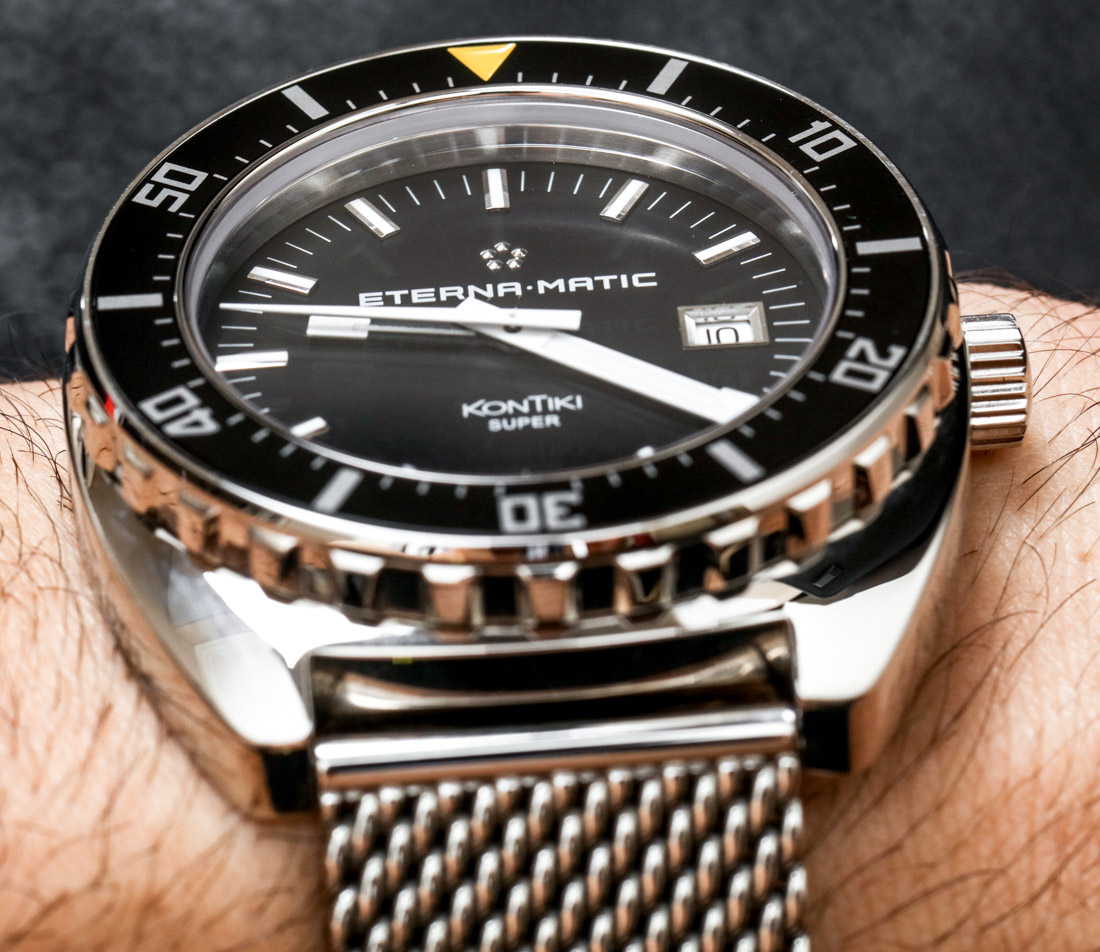 I actually prefer the retro-futuristic look of the original dial, and the bezel is, in my opinion, a bit classier on the 1973. Applied hour markers and date window frame add welcome depth to the dial, and the hands are hard not to love. Like many diving-style watches of the time, Eterna went with an ultra-prominent minute hand, and a less prominent hour hand. Legibility is great, but you also have an interesting dial design imbued with a ton of character. Functional-feeling, that makes it a good war watch for me. 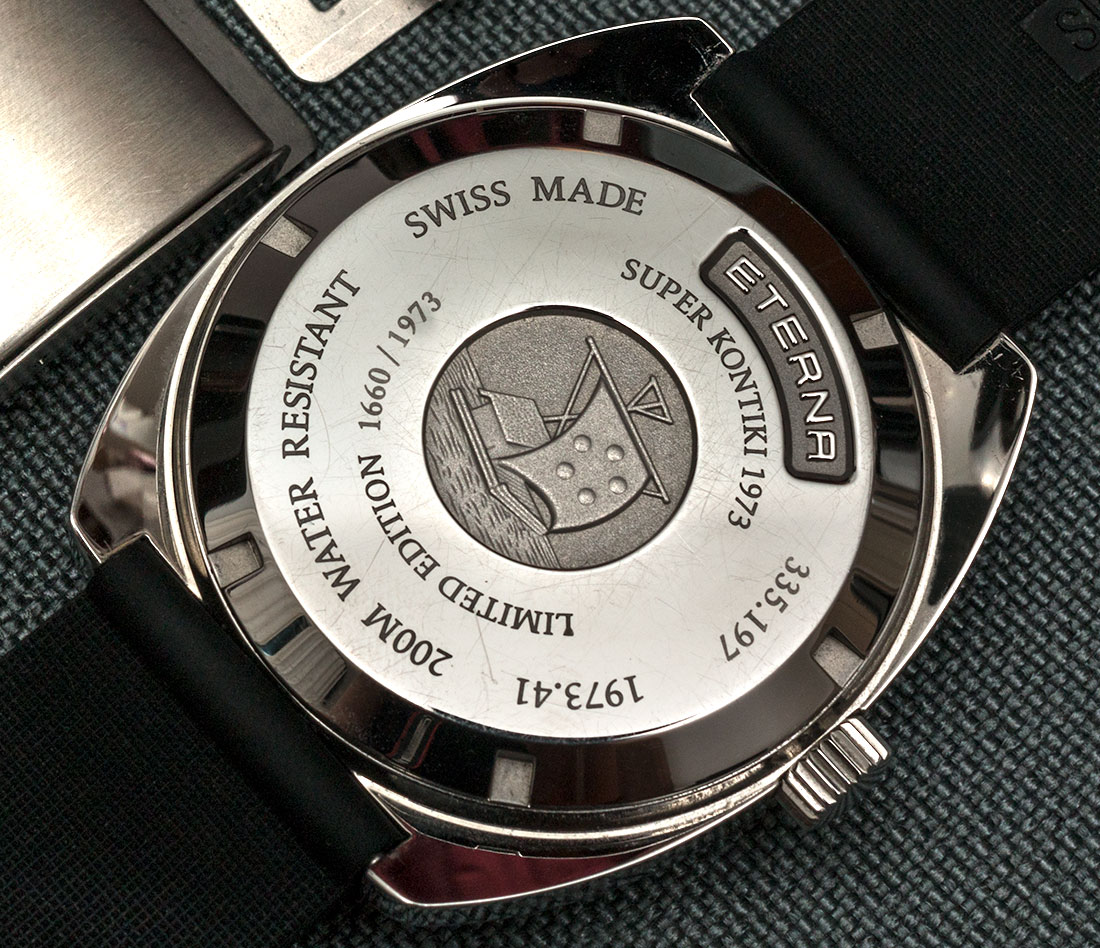 Inside the Eterna Heritage Super KonTiki 1973 limited edition is a base Swiss ETA 2824-2 automatic. This isn’t an in-house-made movement, but I do like to remind people that Eterna actually started ETA back in the day (find out all there is to know about that in David’s ETA history article here), so having an ETA movement in an Eterna actually feels quite appropriate. I should add here that around the dial of the watch is a uni-directional rotating bezel, and over the dial is an AR-coated sapphire crystal. 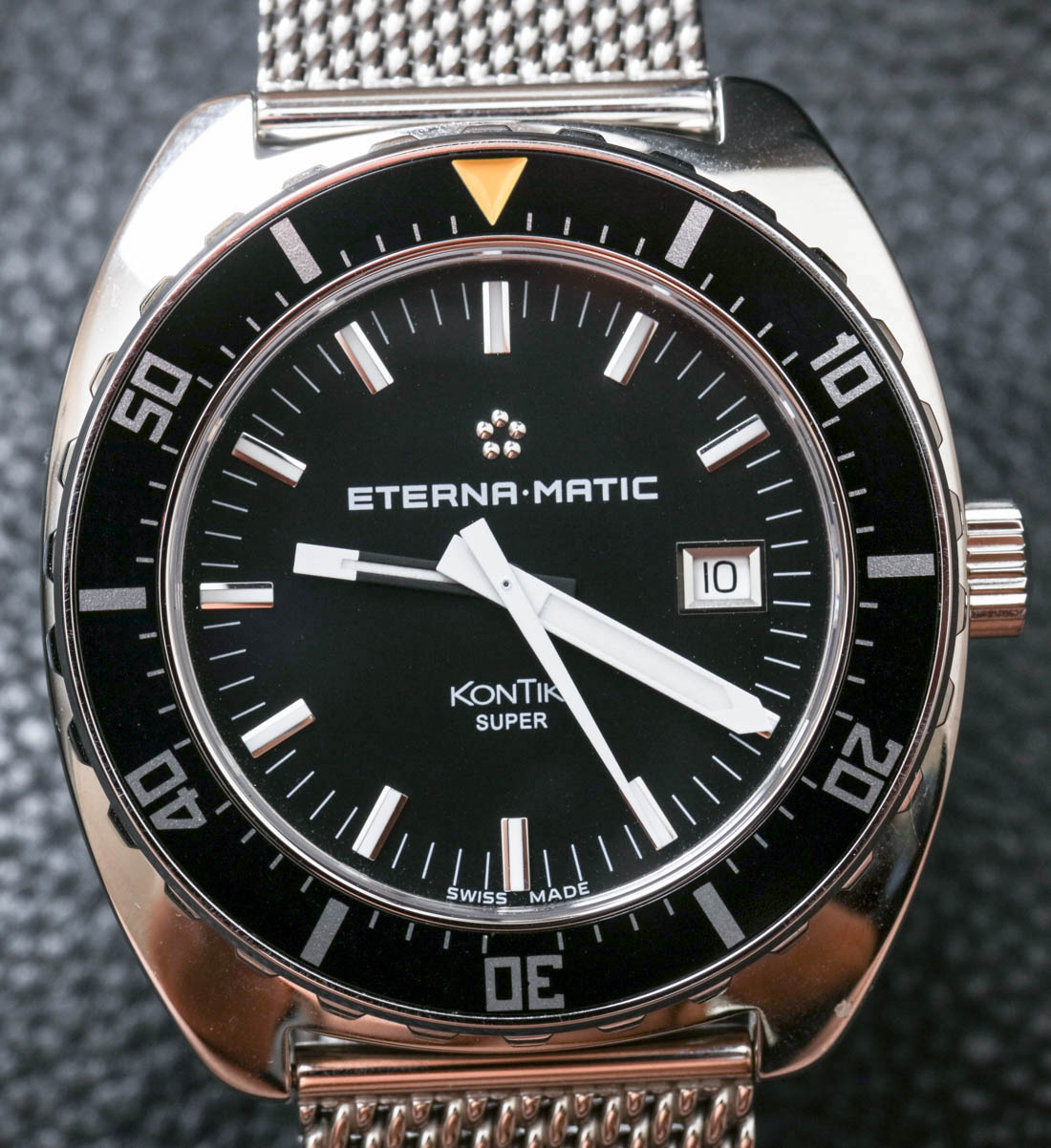 I happen to like taking this watch to the beach while swimming. The Eterna Heritage Super KonTiki 1973 also happens to look really killer while wearing it with a wetsuit. One of the reasons I like having watches like this with distinctive personalities is that they take on the mood of the situation they are in. As a casual weekend watch, the Super KonTiki works as well as it does as an outdoors, diving, flying, or driving watch.

It made me proud to offer a limited edition Eterna Heritage Super KonTiki 1973 watch for The War Of Baselworld 2016 to members of the aBlogtoWatch team. We do fun stuff like this as much as we can. Not only to make sure our team has objects of high sentimental value for the future, but to also remind us that at the end of the day, watches are toys, and we are here to have fun. Now, on the following page, we’ll let each recipient member of the team have their own take on their Super KonTiki.