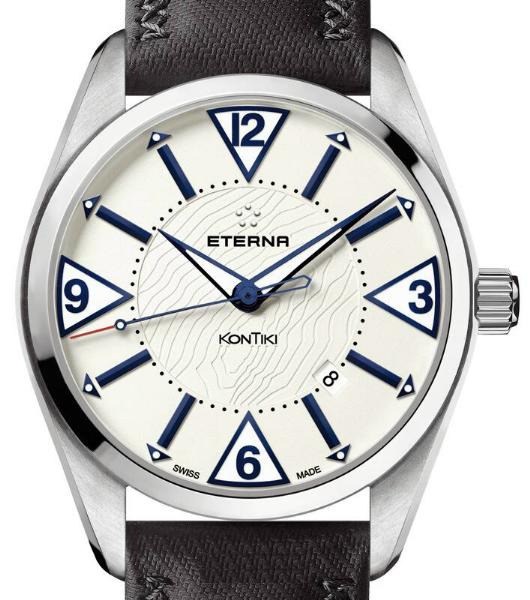 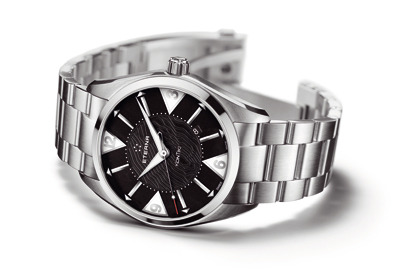 While there have been a few new releases from Eterna this year, the company has been relatively quiet. I did happen to notice this fine new release based on their re-issue of the classic KonTiki model. There have actually been a great deal of KonTiki watches over the years, but the versions with the four triangles are the purest in form. The recently re-released the KonTiki had a centralized date dial with an indicator hand, this new model has an internal date disc with a covertly placed date window between 4 and 5 o’clock. I must admit that it does improve the look of the watch — as the date window is functional, but not obtrusive. It further allows for greater appreciation of the dial and basic theme of the watch. The watch was designed as a sport watch back in the 1950s (I believe). Funny how what was informal then, almost looks formal now. Though the black and orange faced version is still quite sporty looking and certainly has the best personality of the two in my opinion. Really spectacular. 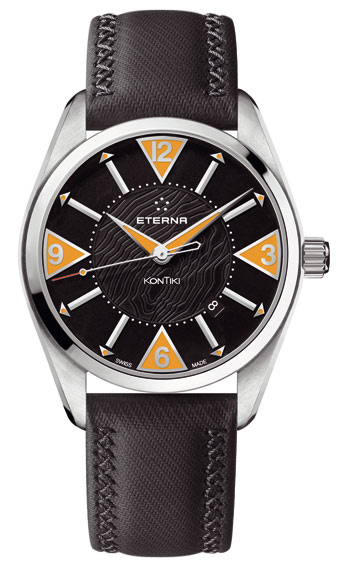 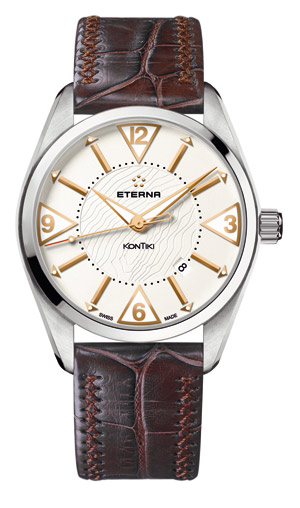 You’ll notice the new texturing in the middle of the watch display. It looks pretty nice, but I can’t tell if it is trying to emulate wood grain or a topographical map? Probably wood, but you can never be too sure with watches based on navigation! The KonTiki is a classic looking watch with a high degree of legibility. Classic enough to sit on anyone’s wrist, but it has enough character to stand out. It is really the little touches on the watch that add to the appeal. Take for instance the cross stitching on the fabric strap and the lovely blued hands and indicators. With hands the right size and finely applied hour markers, it is really a refined look. The small dash of red color of the seconds hands is a nice touch as well.

The good part is the Eterna has reserved this model as something affordable. Inside is a Sellita SW200 automatic mechanical movement. This is essentially a clone of the ETA 2824-2 movement. The solid movement is hardy, but not too expensive. I imagine this watch will run for between $2,000 – $3,000 (retail is 2,200 euros) when it is released soon. Plus, there will be over a dozen different versions given all the dial colors and strap options.