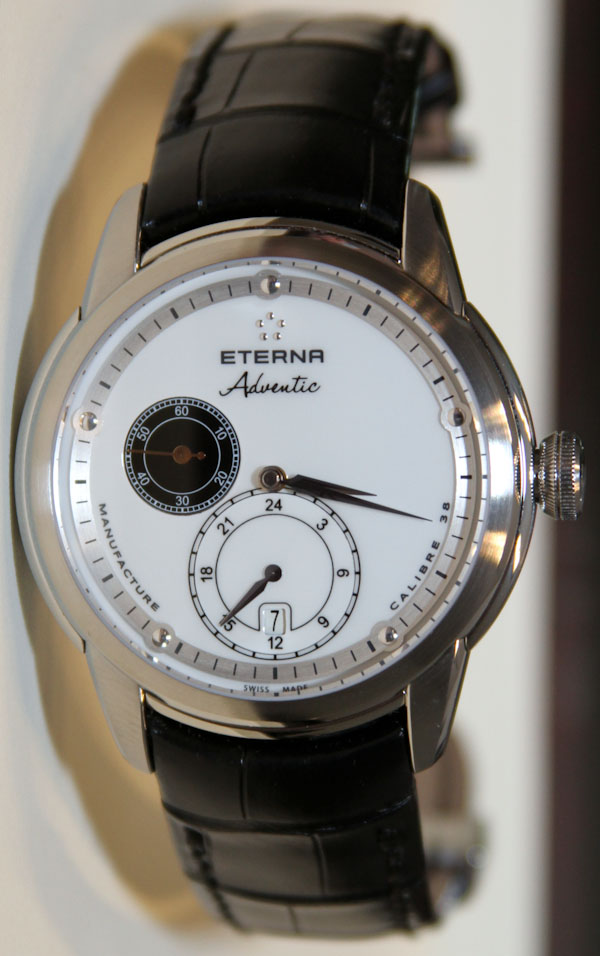 A reader recently asked me “what is going on with Eterna? I haven’t seen their stuff in stores in a while.” Well Eterna is alive and more than kicking, but I don’t know how much of their stuff you can find in North America. Watch lovers who have been in the game for a while are familiar with Eterna. Newbies might not have heard of them, but will surely know of Porsche Design. Eterna are the guys who produce all of those pieces.

I meet with Eterna each year to check out their new stuff. The brand is interesting and they really excel when it comes to mechanics, especially with their in-house made movements. They also have some cool sport watches in their KonTiki collection. Lately however, their stuff seems to be more traditional in design, and I think they aren’t exactly hitting a sweet spot. However, their movements are very cool. Buyers interested in getting a great Eterna movement these days simply have to put up with some less than inspired designs.

UPDATE: The final retail versions of the Adventic have longer hour and minute hands – images of these final watches are the marketing images included in this post. 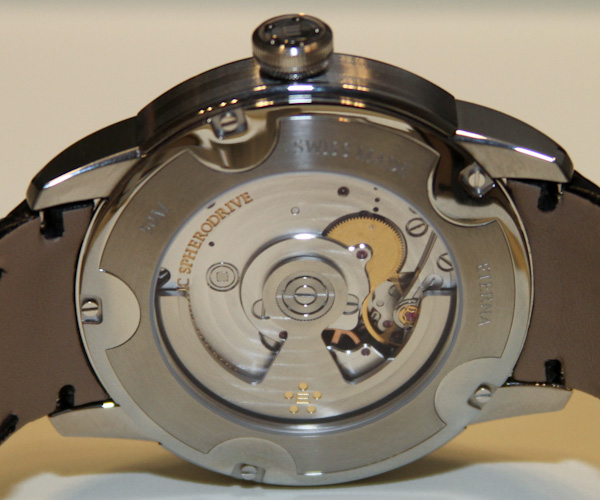 I did a hands-on review of an Eterna Madison Eight Days watch here. If you recall, I really liked the quality of the watch case and dial, and really liked the movement. However, I felt that the movement looked better than the watch. For 2012, Eterna takes their useful and neat sounding Spherodrive technology and makes an automatic movement out of it with the in-house made Calibre 3834. Don’t know what Spherodrive is? Well you can read more about it here from an earlier article on aBlogtoRead.com.

The new Calibre 3834 (38 series) makes a lot of sense for Eterna. First of all because it is an automatic – which is a key part of the brand’s heritage. You need only look at Eterna’s logo. It is actually on the Adventic watch five times, but I will get to that part in a moment. The five dotted logo represents five ball bearings. The five ball bearings that were traditionally used in the mounting point of an automatic rotor. I believe Eterna might have been the first to use ball-bearings for mounting a rotor.  Though the 3834 movement uses at least seven ball bearings for this purpose.

Inside the watch crown end, Eterna actually places five ball bearings – which makes for one of the coolest crowns around. Then you have the logo on the dial under the brand name, and again as five of the hour markers. On the rear of the watch the logo shows up again in the placement of the caseback screws, and last you have the logo with the brand name on the movement itself. Those little details show just how much effort was put into the design – whether it is a look you like or not. 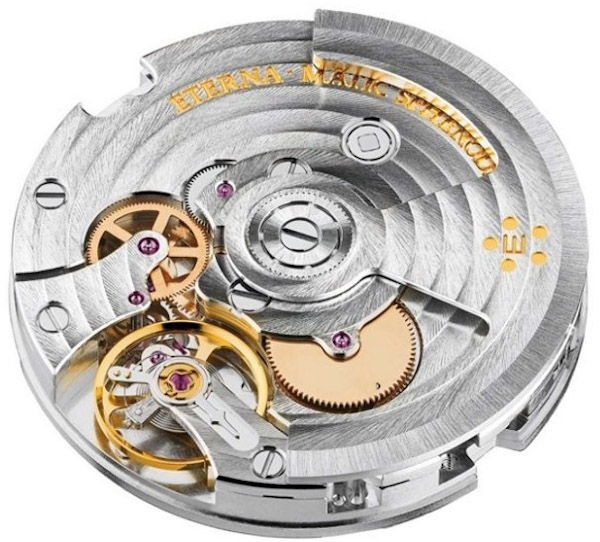 Most will agree that the Calibre 3834 is a rather capable movement. It operates at 28,800 bph with a power reserve of three days. Of course the mainspring barrel uses the Spherodrive system for long-term durability. The automatic movement includes the time, date, subsidiary seconds hand, and subsidiary GMT dial.

Once again the movement looks very nice. Well designed and thoughtfully conceived for durability. This is a caliber made by an engineer for sure. It is not a movement with excessive decoration or flair, but comes across as a high-end work-horse. However, I am not sold on the dial layout. The first thing that struck me about the Adventic was the unbalanced look of the face. The left-aligned subsidiary seconds dial leaves a gaping and plain area of white (or black) space to the right. Something as simple as moving the logo down and to the right a bit might have helped a lot. Alternatively, they could have placed a date dial here versus a date window in the GMT dial. As you can see, a few changes and tweaks could have benefited the design, but were not done for some reason. The version of the Adventic with the black dial makes a bit more sense, as there is not that huge contrast with the subsdiary seconds dial there as there is on the white dial version. 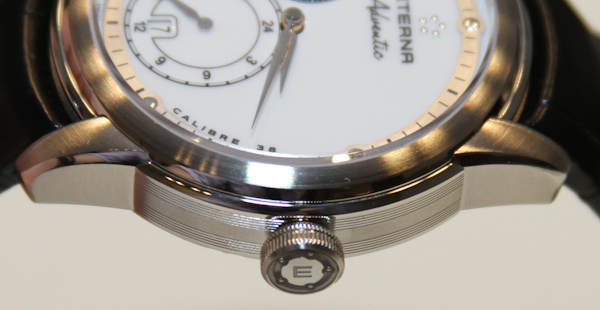 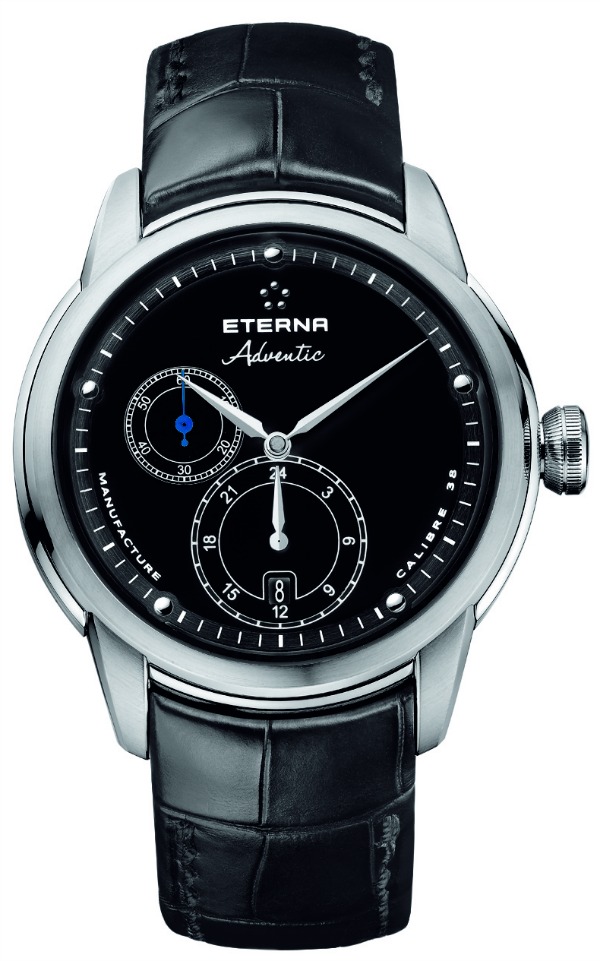 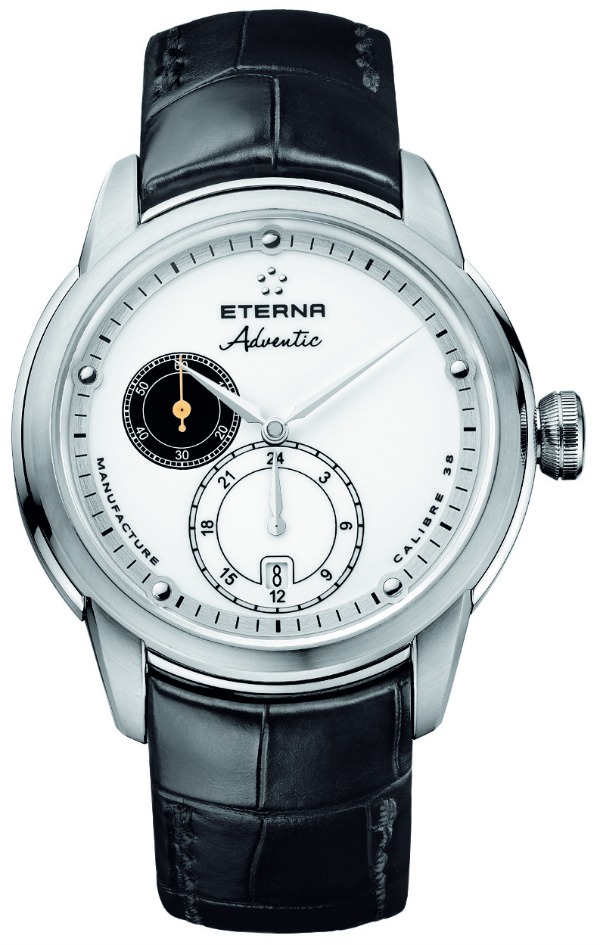 Let’s face it, the hands are too small. Eterna is usually really good about the size of hands but the Adventic model’s hour and minute hands are puny compared to what they need to be. This is especially a problem with the types of hands that they used, which look wonderful when they are the right size. As much as I loathe the term “oversize” when it comes to watches, I have no qualms about using the term “undersized.” These are some seriously undersized hands.

The Adventic case is 44mm wide in steel and available 18k rose gold. The case is water resistant to 50 meters and the detailing on the case is interesting. Eterna spared little expensive in the quality and construction of this watch. Though the person who designed it needed some people to bounce their ideas off of in order to tweak the Adventic’s look. The Calibre 38 series is genuinely exciting for me and it is hard not to appreciate Eterna’s sincere attention to detail. I mean the parts are nice, the case is cool, and the use of the five pointed logo five times is fun. They just missed the mark on the design of the Adventic overall. The good news is that with some tweaks it could be much better.

Where did the Adventic name come from you ask? It does sound cool. It mixes terms like, adventure, inventive, advanced, and mechanic. Eterna said they just made it up and liked how it sounded. Good job on that one. So let’s get a design fitting for the name. Price is on the higher-end as well. The Eterna Adventic watch in steel retails for $11,300 and $28,630 in 18k rose gold.