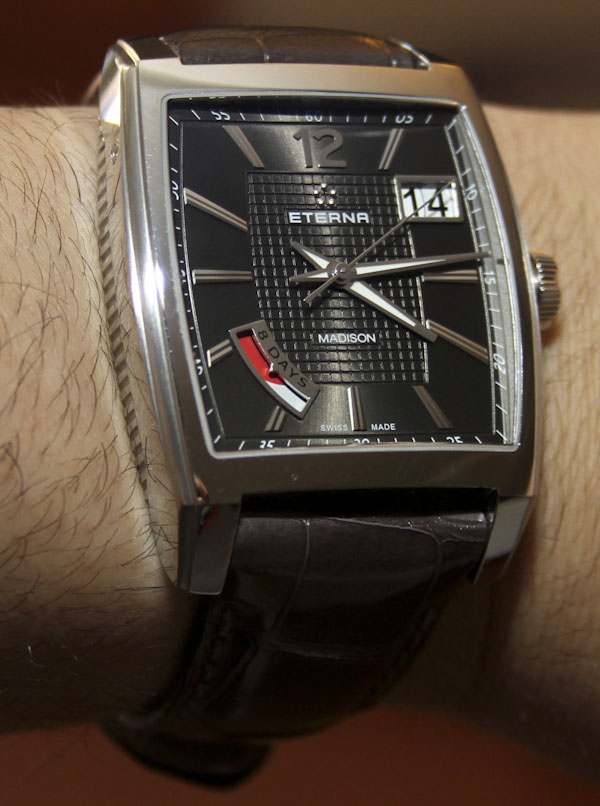 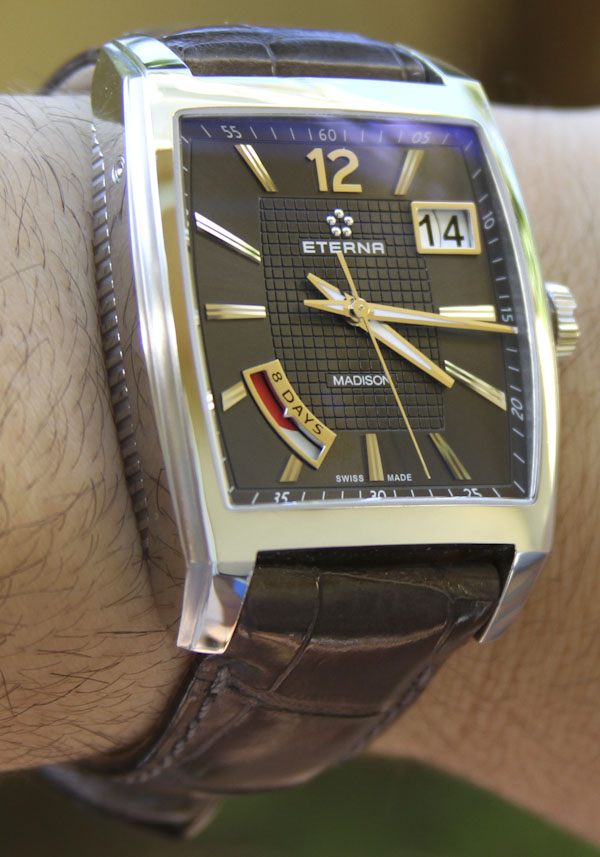 “Spherodrive” is a term that sounds really cool. I sort of want to shake the hand of the guy who penned it. Funny how the Swiss watch industry still has clever engineering-minded people who come up with this technology and these names. The industry is full of terms such as this like “co-axial escapement, silinvar, constant-force, and magic lever (that last one goes to the Japanese).” Often times these terms are much better than actual watch model names.

A few years ago Swiss Eterna debuted its new Spherodrive technology in a Madison watch. I discussed the Spherodrive Madison with the calibre 3505 movement here. In that article you can also learn a lot more about Spherodrive mechanism itself and what it is all about in comparison to more traditional mainspring barrel assemblies. In short, Spherodrive is a new way for mainspring barrels to connect to movements. It creates a more stable connection and one that is more reliable. It also uses ceramic ball bearings that require no lubrication. This all means that the watch requires less maintenance, is going to be more accurate, and less prone to being damaged over the long run. According to Eterna, before Spherodrive mainspring barrels haven’t been given a lot of attention and should be considered one of a watch movement’s weaker points. 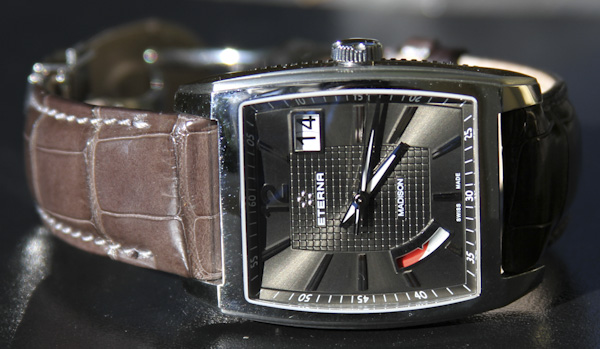 To showcase the debut of the Spherodrive technology in the manually-wound Calibre 3505 movement, Eterna put the movement in a Madison watch. Simple and elegant, people argued that the conservative looking timepiece was perhaps not the most exciting way of debuting the novel mechanism. So Eterna followed up with a new movement called the Calibre 3510. Also manually wound, this movement added a big date mechanism and an 8 power reserve (via two barrels) with a power reserve indicator. Still a Madison, the watch was updated to look more modern and technical. While still a conservative looking timepiece, this Madison Eight Days is easily a better frame to show off the Spherodrive system.

The Calibre 3510 is easily the best part of the watch, and again is entirely made and designed by Eterna (a true in-house movement). The rectangular shaped movement is a visual spectacle with its two large mainspring barrels and attractive finishing. People don’t expect it when you hand the watch to them and they turn it around to see the movement through the sapphire caseback window. The movement really makes the watch what it is. With 192 hours of power reserve it is necessary to have the power reserve indicator there to show you when to wind the movement. Winding the movement is simple enough but you need to wind for a long time. Yes, it is going to be more than just a few turns to wind enough power over a week, but I find that the Calibre 3510 seems to require even more than the expected amount of winding.

Also when winding the movement the barrels sometimes “jump.” This means that while turning they sometimes turn a bit more rapidly for a second – which is sometimes called “slipping.” This isn’t so much an issue as a question I have as to what causes this. I think it might have to do with the fact that the barrels are series coupled. Operation of the movement is otherwise pretty simple. The crown could be a little bit grippier, but winding the Madison Eight Days is a breeze. I like Eterna crowns because the five point logo is integrated into them. Ironically that five point logo is supposed to be five ball bearings. While adjusting the time is easy, the date requires pressing an inset pusher located at about 10 o’clock on the case. While it works just fine, you will need a pen or stylus to adjust the date.

Eterna offers the Madison Eight Days with either a black, gray, or silvered dial (matched to a black or brown Louisiana alligator strap – which is really nice). On the dial you can begin to see the attention to detail Eterna places on the watch case as well as the movement. While tonneau in shape, the case and dial are attractive. The dial is easy to read with large properly sized hands and applied hour markers. Both the hands and hour markers feature very crisp mirror polishing and have luminant applied to them. The “cobble” textured center dial is also a nice touch. 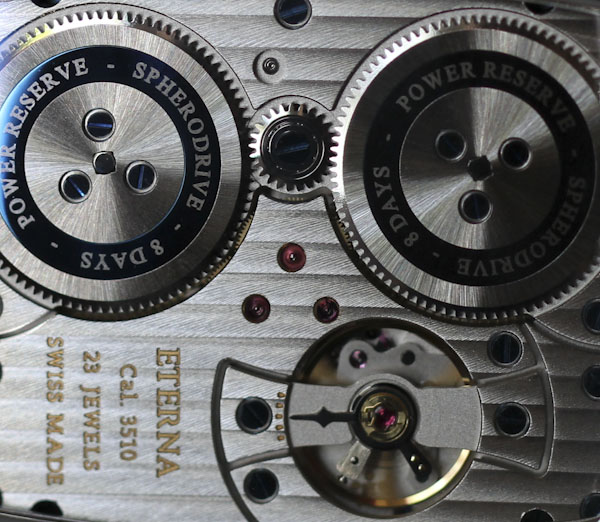 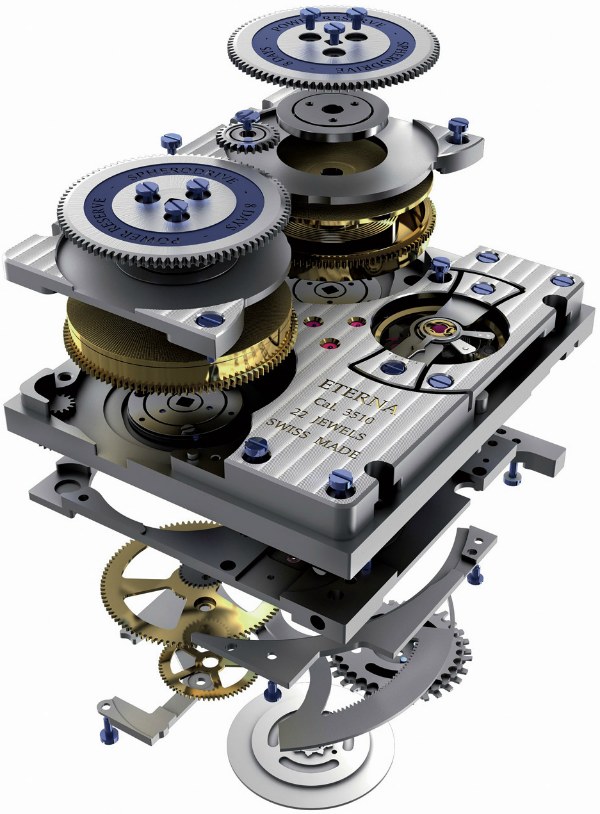 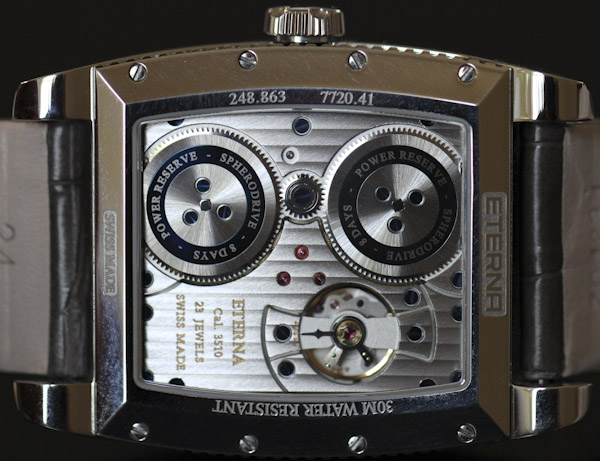 While I am not a huge fan of asymmetric dials, the Madison Eight Days does it well. The large big date window is easy to see and the power reserve indicator helps visually balance it on the dial. While the face of the Madison is not exactly modern in its approach, it is done well and offers a satisfying visual experience that won’t wear on the eyes over time. Interesting design elements do however appear on the case. The almost “architected” sides of the steel case help reduce visual mass (as this is not the thinnest of cases at 13.25mm thick).

Big in stature the Madison Eight Days case is offered in steel and is 38.5mm wide by 53.3mm tall. The slightly rounded lugs keep it looking good on medium to large sized wrists. Comfort is overall very good and – once again – the quality and finishing of the case impressed me. Over the dial is an AR coated sapphire crystal and the case is water resistant to 30 meters. 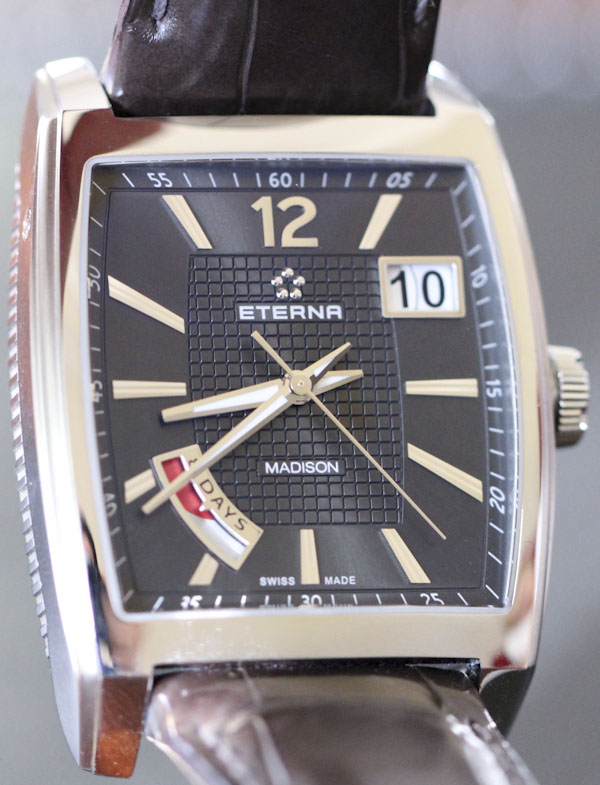 Understanding the Spherodrive technology and its benefits made me suggest back in 2009 that (and I am paraphrasing) “all mechanical movements should use this technology someday.” Unless there are mechanical drawbacks that I am not aware of, the Spherodrive system for connecting mainspring barrels to movements is a no-brainer improvement over the the standard technique. There is however the matter of price. Eterna’s Madison Eight Days watch retails for 11,950 Swiss Francs. True, quality is high and you get an in-house made movement, but it is still an expensive endeavor. Mechanical technophiles and serious enthusiasts will be attracted by the technology, though I am afraid many casual watch lovers simply won’t understand the technology enough at this point. Eterna is moving in the right direction as a technical innovator, and I want to see Spherodrive technology implemented into more contemporary watches, in new movements with automatic winding, and at prices that are in the $5,000 – $8,000 range.