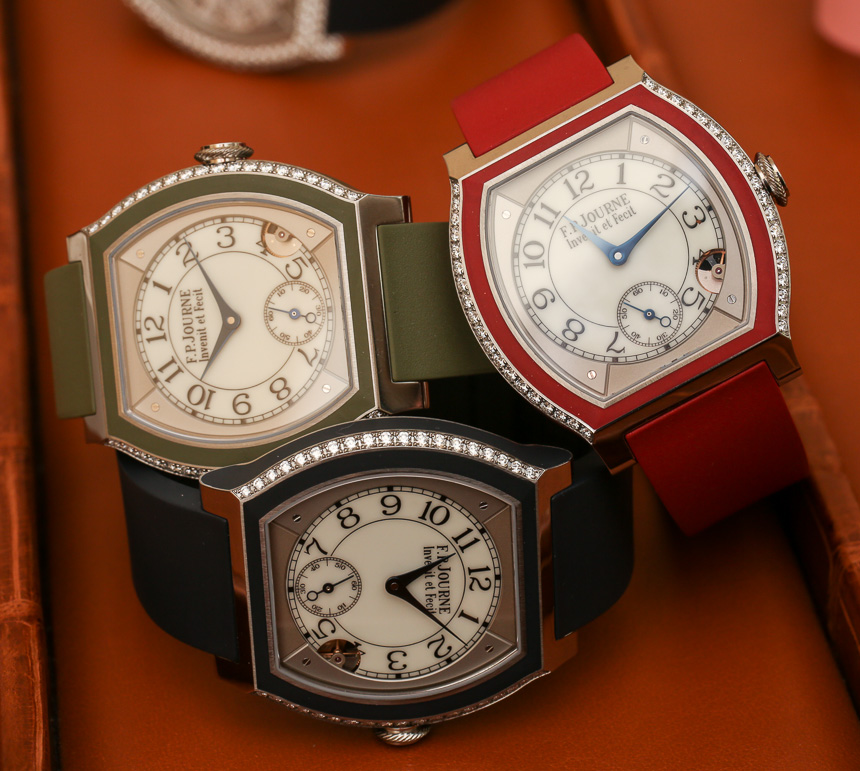 F.P. Journe Elegante Ladies Watch Is High-End Quartz Even A Man Could Covet

I never thought that one of my favorite independent watchmakers from Geneva would produce a colorful lady’s watch that I would not only enjoy, but really wished to write about. Neither did F.P. Journe for that matter. It took him years to finally produce a full collection of watches for women under his brand name, and the resulting Elegante is the first timepiece he claims to have been inspired by the wives of his most passionate clients versus himself.

Knowing Francois-Paul I wouldn’t have guessed him – as a serious watchmaker and classicist – to devote the type of time and effort he did into a timepiece collection for women. In fact the clever mechanism and design weren’t the hardest part – it was the fact that for the sake of fashion he was pressured to release so many colors. Yes, for a man whose own taste and personal desires fuels the creative engine of a company, making these decisions can be difficult. Having said all that, I think that the Elegante collection is a resounding success. So much so that I’d love to see a version of the movement in a men’s watch (though I doubt it will happen given Mr. Journe’s strict dedication to all things mechanical for his own wrist). 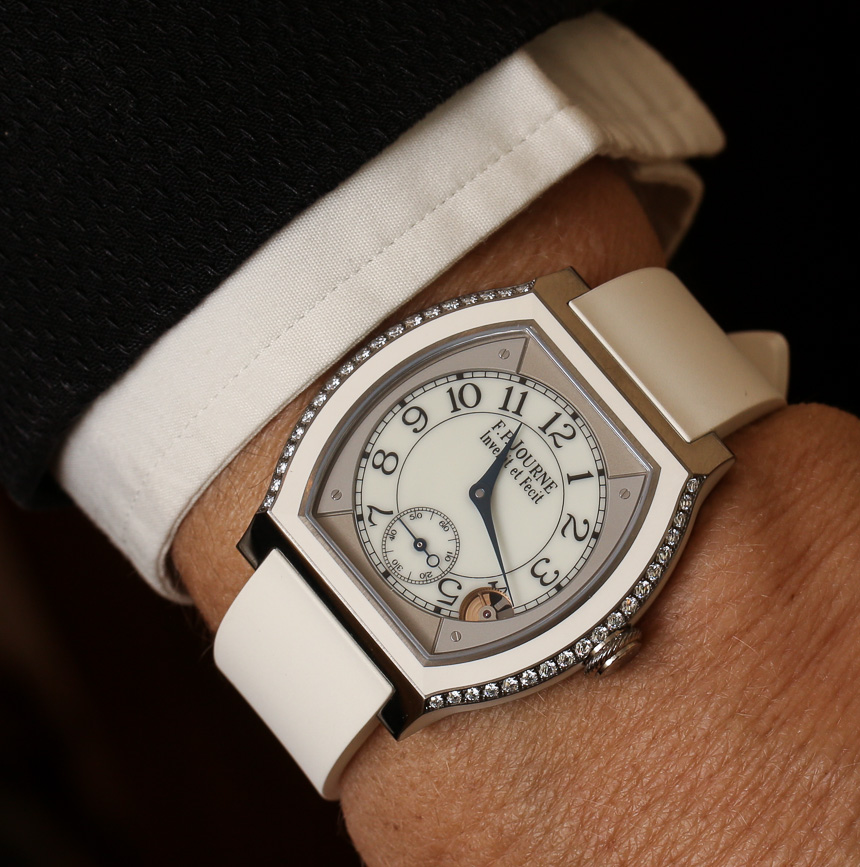 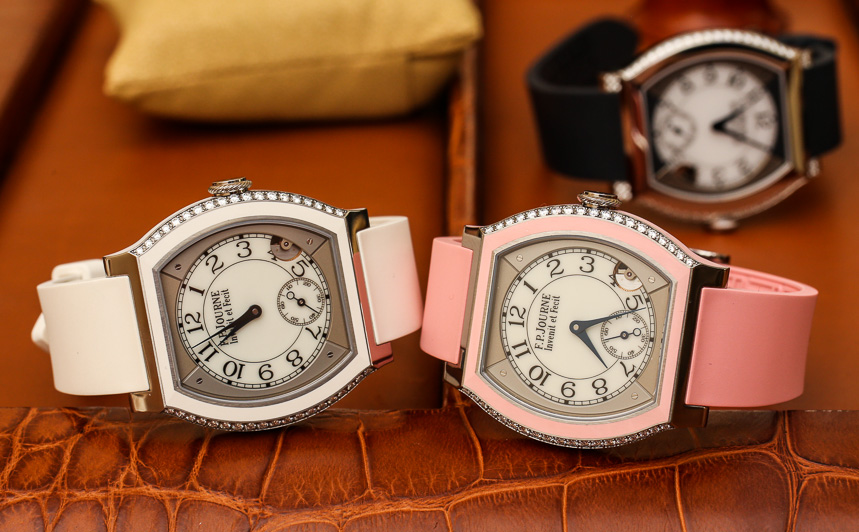 Eight years after he began to develop the Elegante, it becomes available in a healthy variety with a very attractive opening price for a Journe creation. Seven color varieties are available as well as case materials in titanium, 18k red gold, as well as platinum. Of course diamonds are a major part of the Elegante equation with models available featuring strips of diamonds on left and right bezel sides to those with full pave faces. Though the most basic Elegante case can be available without any diamonds.

All versions of the Elegante watch come with rubber straps, and all but the most diamond covered creations feature inlays of rubber. Yes, rubber is used to color sections of the case including the bezel as well as the sides of the case. It should not surprise you that F.P. Journe (who produces the cases) uses a technique derived from grand feu enameling to add the various colors of rubber to the Elegante cases. It woks incredibly well, especially give the unique angles and curves of the tortue-style case. 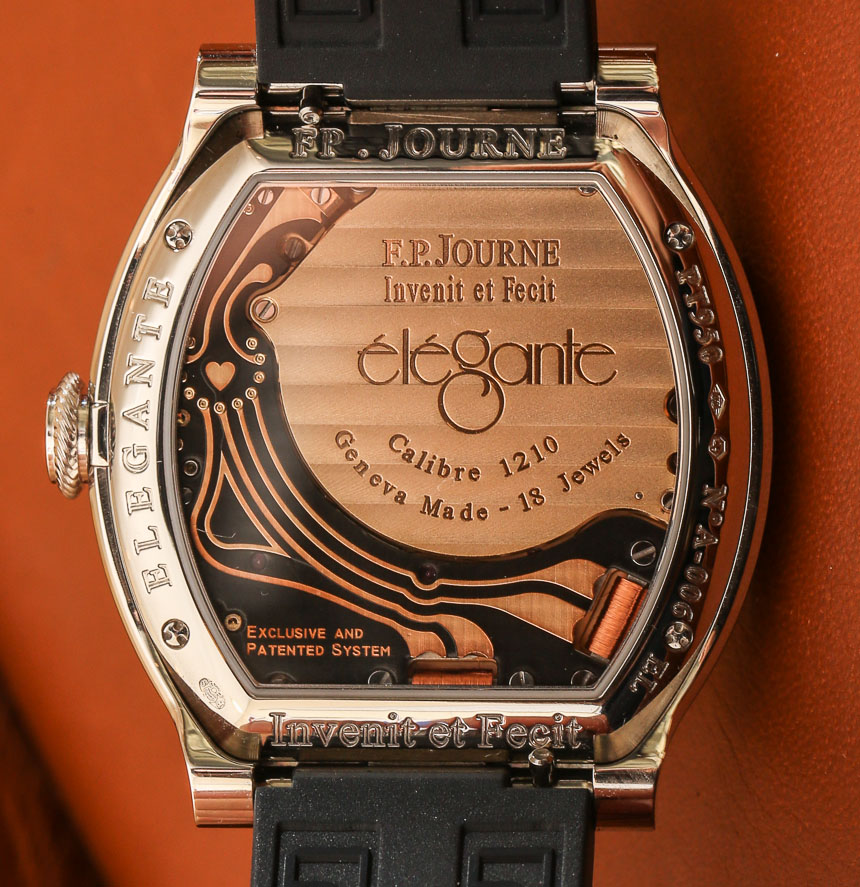 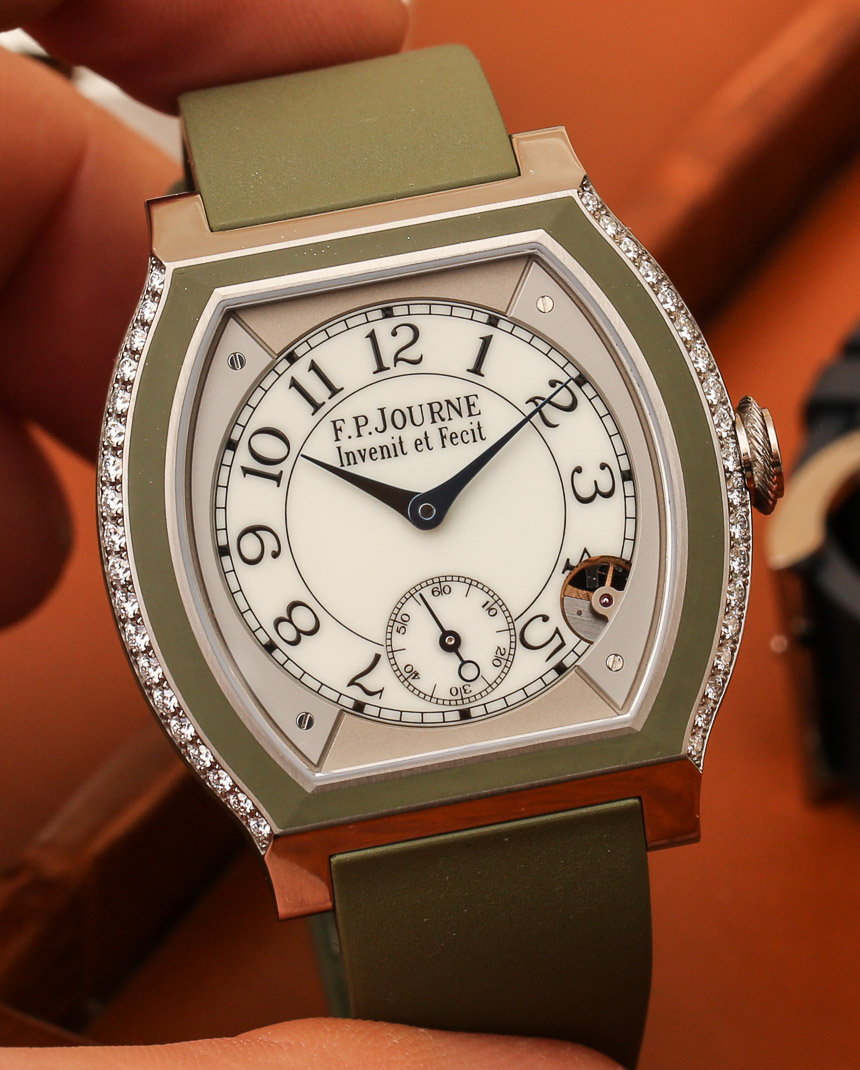 Some of you might recognize the case from an earlier F.P. Journe that is the Vagabondage II from 2009 that we went hands-on with. While the Vagabondage case was never that large, F.P Journe shrank it down for the Elegante believing it to be a very attractive and feminine shape. He was right. While I would have not thought that this timepiece might work so well on paper, in the flesh it is absolutely fantastic for women. It combines a feminine design, youthful sense of style, interesting and convenient movement, and an esteemed high-end prestige that is unequaled anywhere else.

That’s sort of interesting because many see 2014 as a year that luxury watchmakers target women in a big way. For years women have mostly purchased quartz-based jewelry watches and the industry thinks it can seduce women into becoming mechanical watch lovers once again. We have certainly been seeing a lot of focus on high-end or more mainstream luxury women’s pieces at the SIHH 2014 show in Geneva. So are the watch brands going to have success with complex, fully mechanical timepieces for women? I really don’t know, but I do know that F.P. Journe’s submission to feminine horological discrimination is extremely clever. 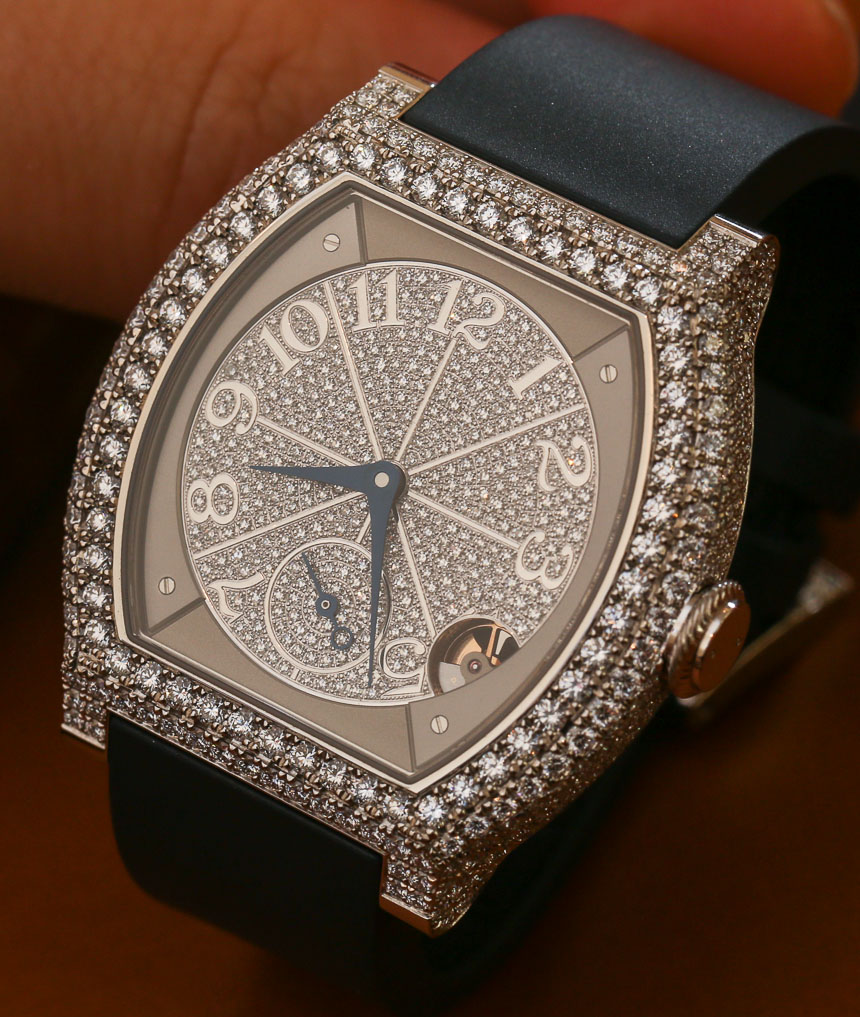 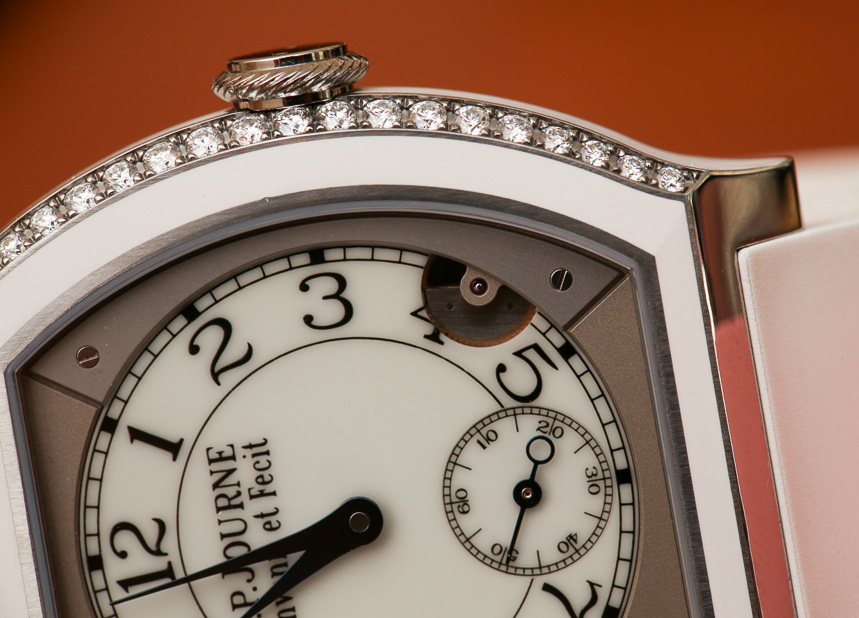 To be honest I don’t know if I like the design simply because it is pretty, or because it packages so much of what I like about F.P. Journe’s intelligence and design in a package so uniquely suited for the female demographic. While there are women who want traditional mechanical watches, Journe is betting that it isn’t as many as the industry might hope for. So for the guy who is the ultimate mechanical watch snob, he sought out to build an incredible quartz movement.

Yes, F.P. Journe has a hand-made quartz movement watch designed by him and produced in collaboration with a partner in Switzerland. It is probably the most high-end quartz movement produced today. The movement inside of the  Elegante watches is known as the caliber 1210 and is an electro-mechanical system with some clever features as well as the requisite level of F.P. Journe quality and attention.