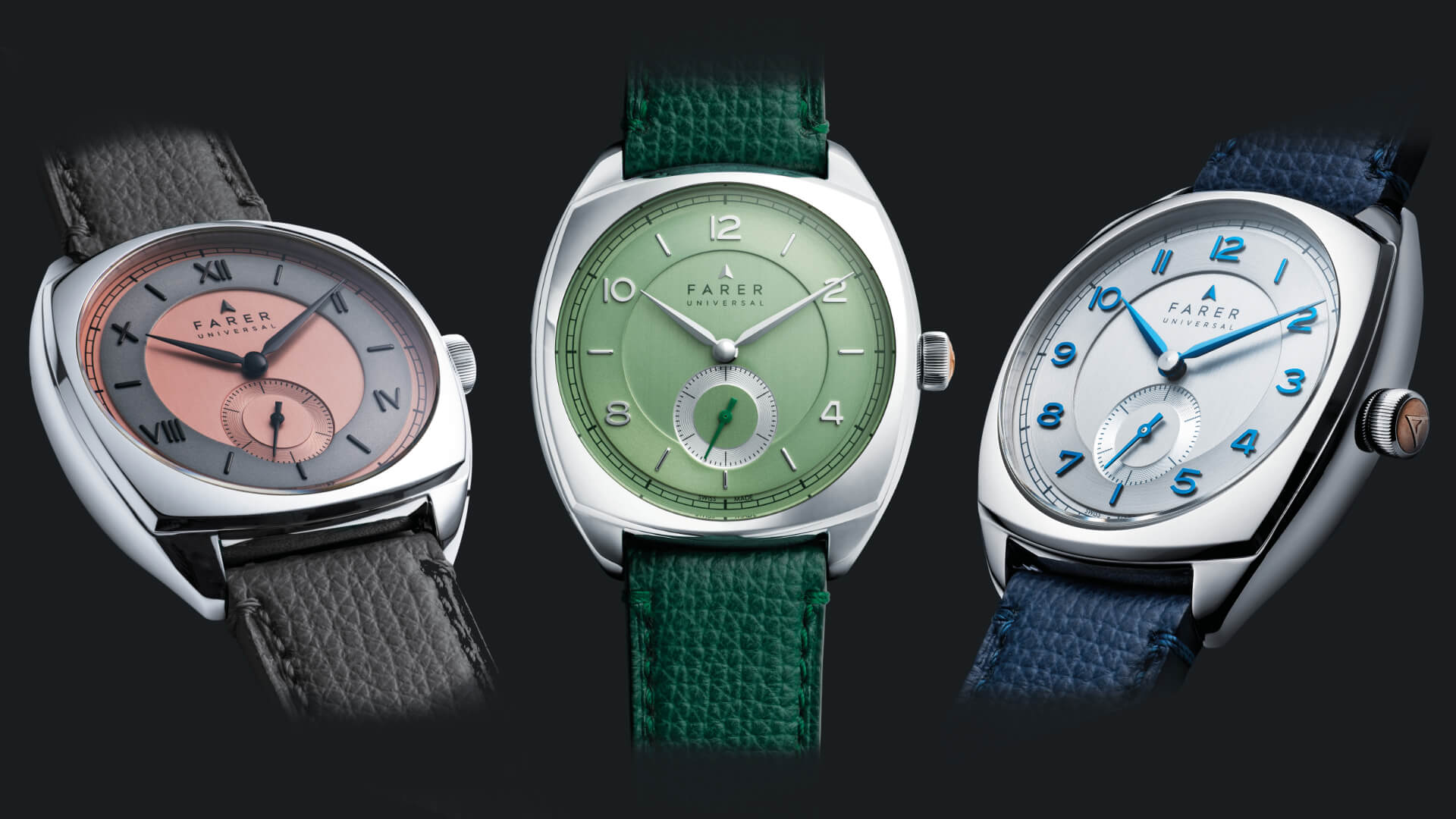 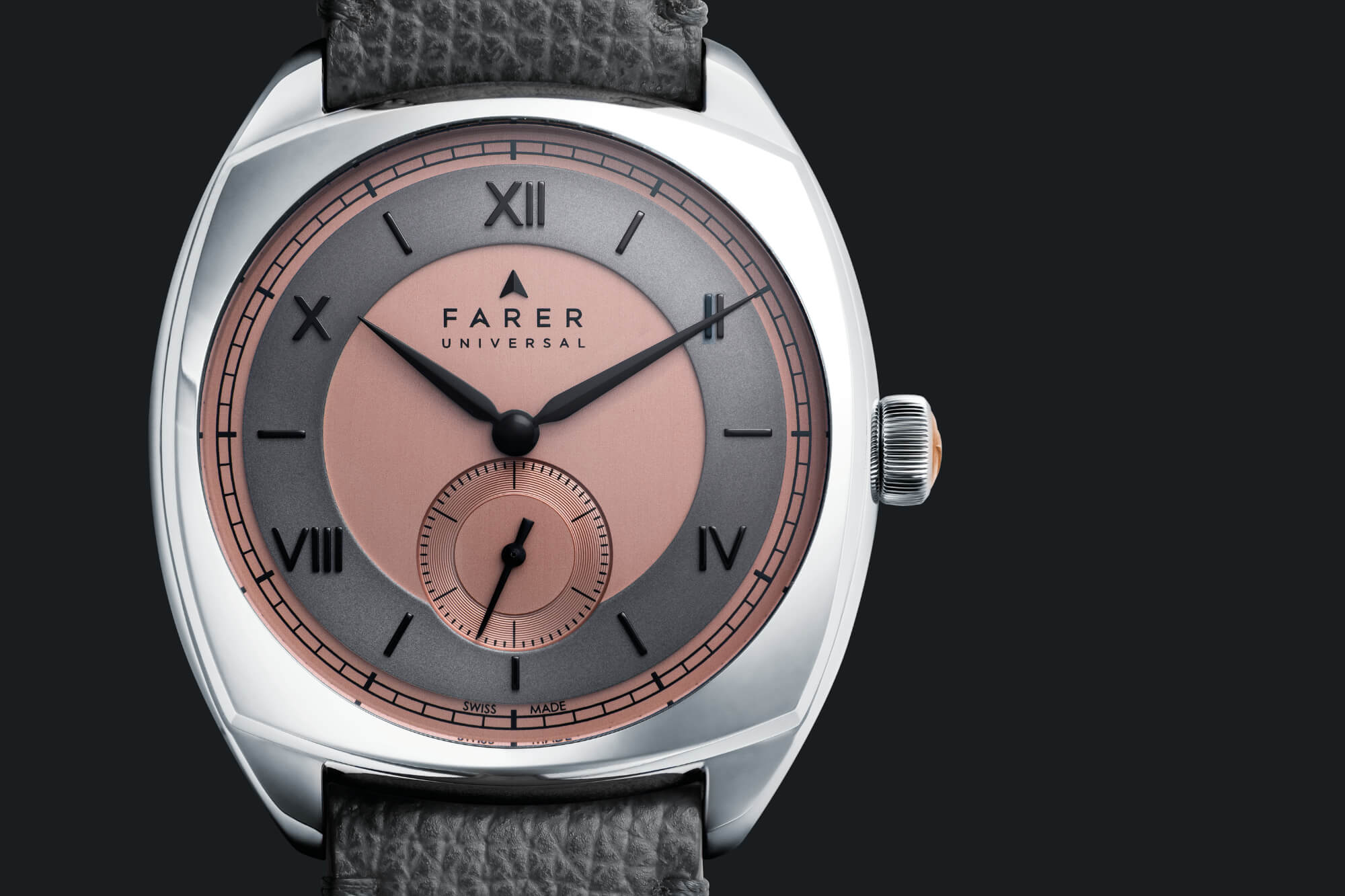 British watchmaking is exploding. While there are a few high-end brands, the bulk come in under $5,000, offering an enticing array of watches for the modern Anglophile—or anyone looking for a new watch with a bit of character. Because if there’s one thing that seems to be true of all these brands, it’s that their watches have character, whether it’s a splash of color, heritage, or a signature case. Farer is no exception, and perhaps more than any of the other extant British brands, it has a good bit of fun with its watches. Since its founding in 2015, Farer has released a dizzying smorgasbord of colorful watches (and insisted on the confusing convention of giving every new dial a new model name). Most recently, Farer has just expanded on its hand-wound cushion case Stanhope II (which itself was updated earlier this year) by releasing three new dials. 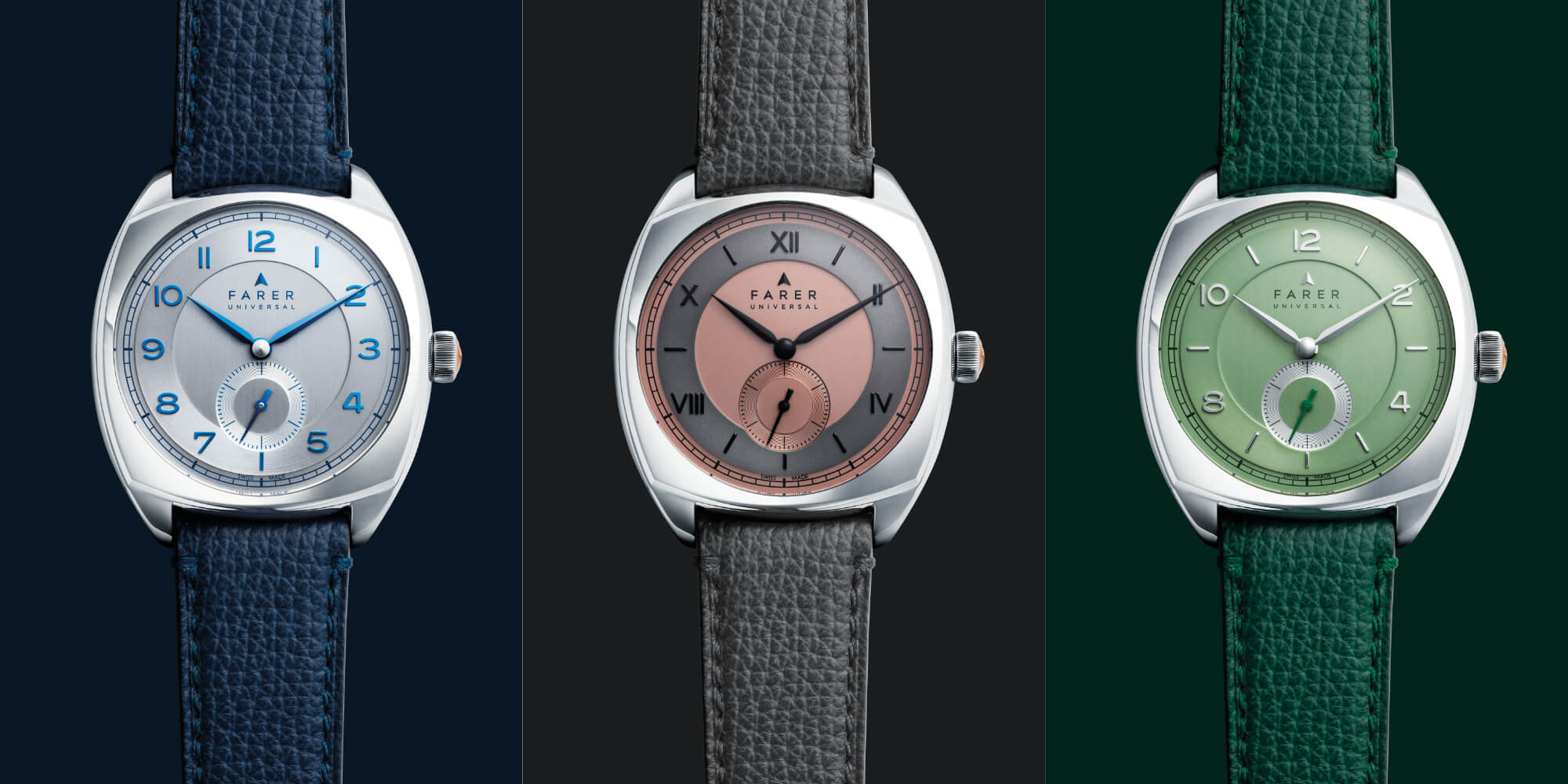 Three new dials are presented: the silver Lethbridge, the two-tone salmon Durham, and the green Mansfield. The dials all feature the same general layout: a vertically-grained base dial with a chapter ring, raised hour ring with applied numerals, and tiered subdial with running seconds and a radial ring. While the Stanhope II featured lumed syringe hands and lume pips along its sporty chapter ring, the new models do away with the lume, introduce a color-coordinated alpha handset, and swap the sporty chapter ring out for a more traditional railway design. The Lethbridge features Arabic numerals all the way around (save for the 6, which would be interrupted by the subdial), the Mansfield features Arabics alternated with baton markers, and the Durham features that same alternation but with Roman numerals. Compellingly, Farer isn’t just offering different colors, but different hour demarcations which create quite different looks. If I’m picking a favorite, it’s the delicious lime of the Mansfield. 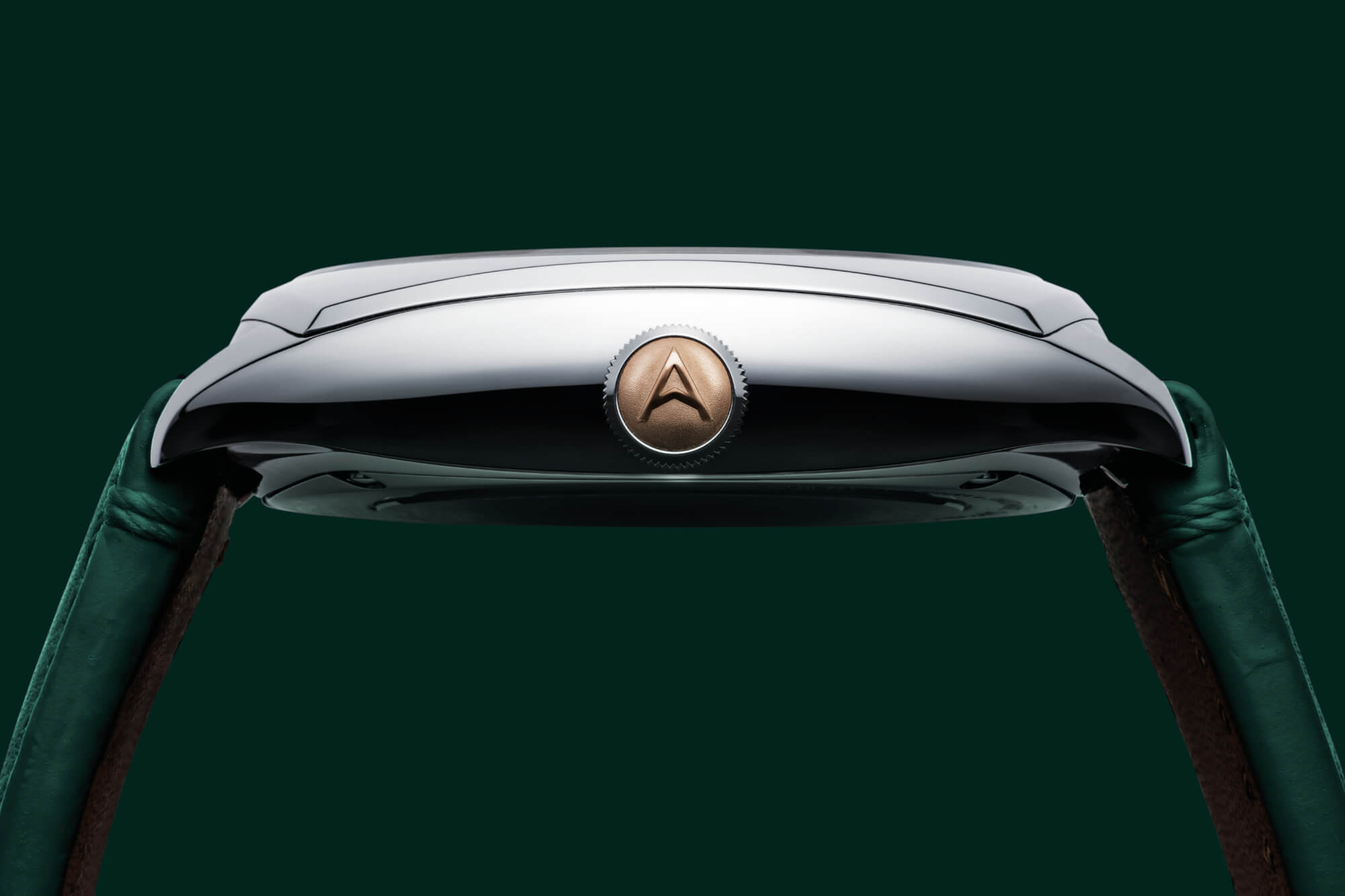 The case of the collection falls somewhere between a tonneau and a cushion case, featuring the midcase of the former and the bezel of the latter, and blending the two with soft transitions and lugs that end in almost pinched points. At 38.5mm-wide and just 10.8mm-thick, the watch is sure to wear easily. Short, curved lugs and a 43.8mm lug-to-lug measurement only further its elegance on the wrist. Because that’s what these watches are—elegant. You can’t pair clean, lumeless dials with swooping lines and subtle transitions and get anything but elegance (I suppose one could, but Farer hasn’t). The case is entirely polished, save for the pull-out crown’s embossed bronze cap, which features the Farer logo (early Farer models featured an all-bronze crown). Given the hand-wound movement and somewhat classic styling, its no surprise that water resistance is only 50m, certainly enough for most occasions where the models might be worn. Each model comes on a color-matched leather strap with quick-release pins. 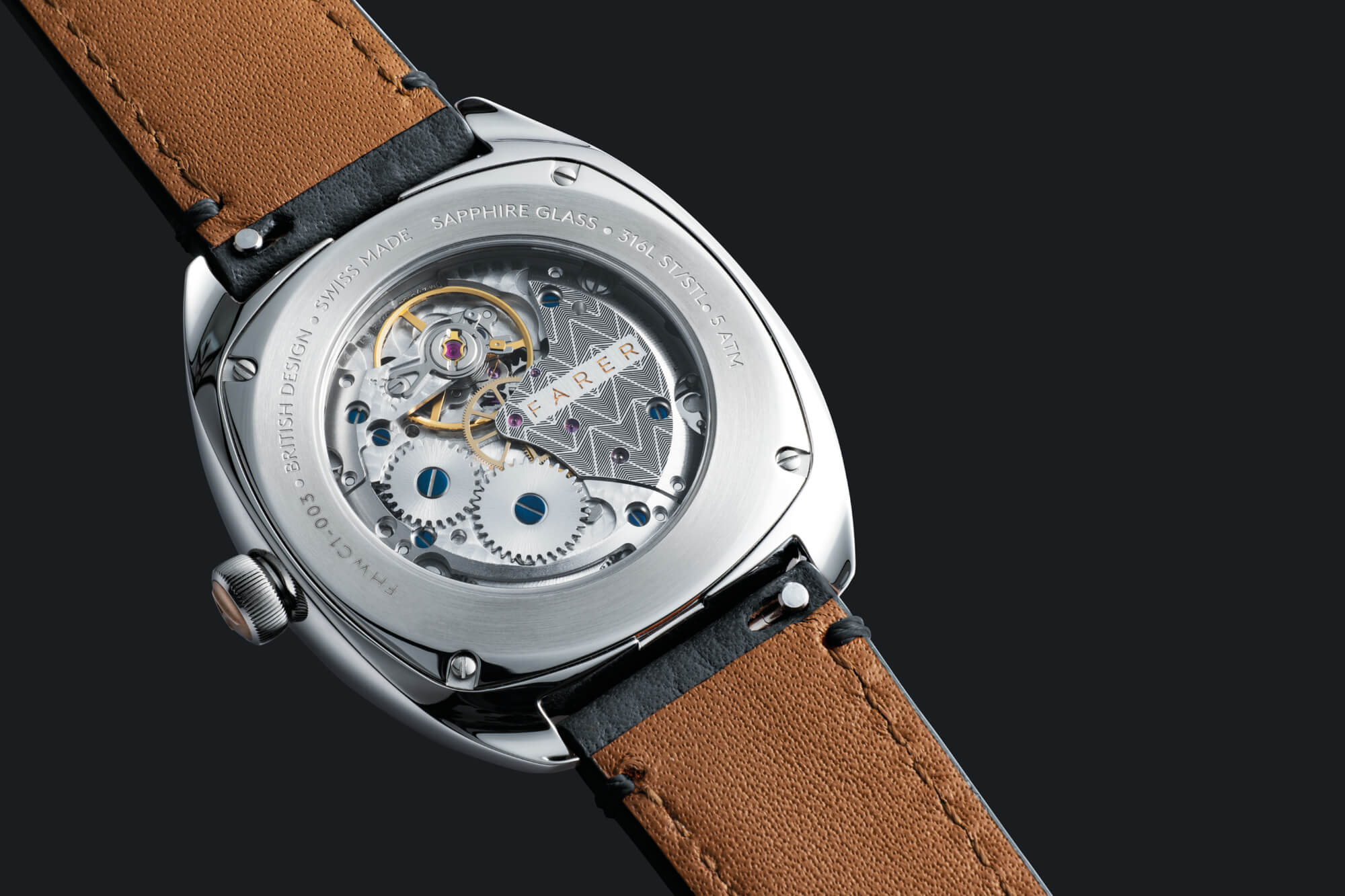 Seen through a sapphire crystal caseback is a Sellita SW216-1.  Farer originally used the ETA 7001 in the original Stanhope release, but when it updated the model earlier this year, it upgraded the movement from the 17-jewel, 21,600 vph ETA to the 24-jewel, 28,800 vph Sellita. The hand-wound movement features hacking and a 45-hour power reserve and although the SW216-1 has a date function, I’m happy to report that Farer has removed the extra crown position. The decoration includes blued screws and a custom bridge with an Escher-like design of interlocking Farer logos. Finally, all the movements are elaboré grade, with a quoted accuracy of -/+7 seconds per day, adjusted in 3 positions. 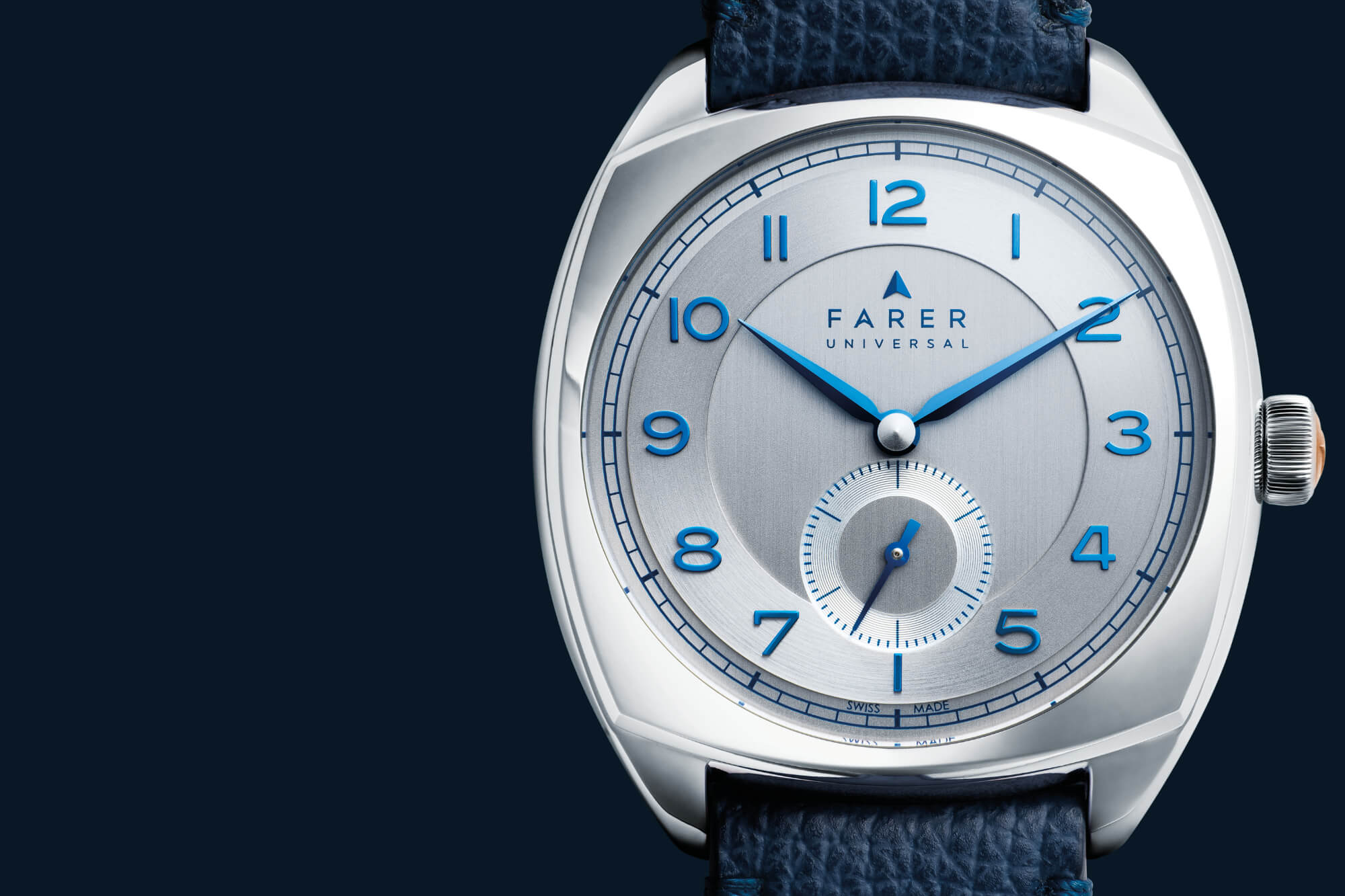 I like this direction for this model line. There was a sportiness to the Stanhope II that felt incongruous with its elegant case. These new models, on the other hand, lean into that elegance while still managing to showcase Farer’s penchant for offering variety and color within the same collection. Do I wish Farer used a typical naming convention instead of giving every new dial a new model name? Sure, but that wouldn’t stop me from enjoying one of these watches. The Farer Lethbridge, Durham, and Mansfield are all priced at $995 USD. For more information, please visit the brand’s website.