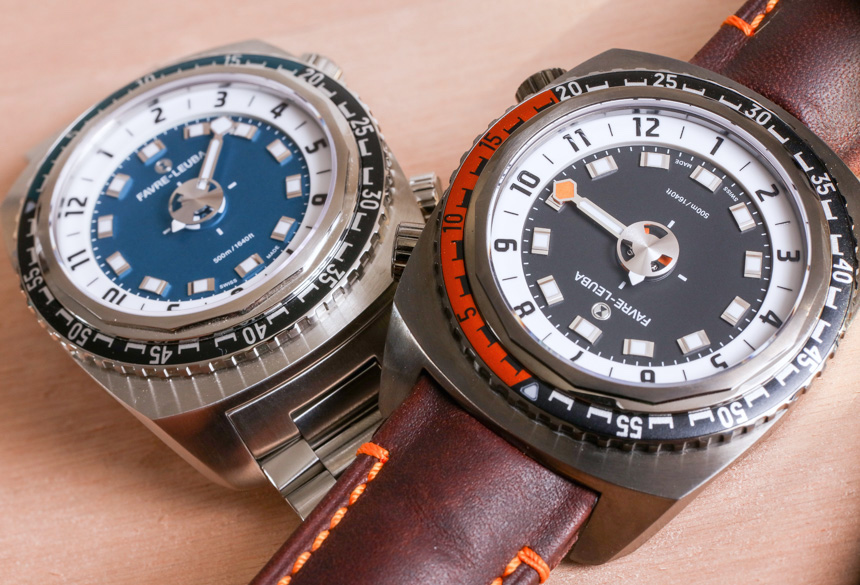 The Swiss Favre-Leuba Raider Harpoon watch (originally debuted on aBlogtoWatch here) is a distinctive combination of a few different things which helps separate it a bit from the otherwise crowded market of high-end sport watches. First, there is the classic Favre-Leuba brand, which is one of the many storied names from Switzerland’s history of watchmakers. Next is the Raider Harpoon’s design, which is a modern take on 1970s-era design irreverence that the original Favre-Leuba experimented with liberally at the time. Third, the Raider Harpoon employs a non-standard way of indicating the time, which is appealing to horology-buffs. So what does all that add up to?

Thomas Morf – who runs Favre-Leuba today – grew up in a small part of Switzerland similar to all the little villages and towns where many of our favorite timepieces are produced. Getting to know a bit about him helps me to understand the current direction of the brand, as well as the philosophy behind products like the Raider Harpoon. Morf is seemingly more comfortable wearing a t-shirt and jeans as opposed to the more traditional business guy attire his watch industry colleagues seem to prefer. This makes him more familiar to a Southern California guy like me, and it helps understand the appeal behind a product like the Raider Harpoon. 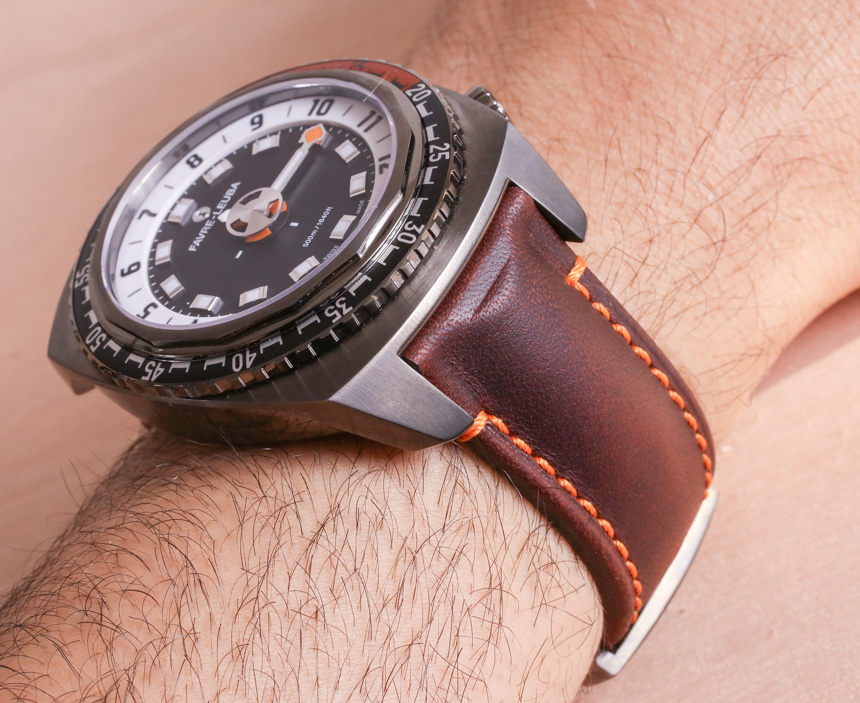 Thomas tells me that he has no personal interest in flashy things but rather, that he is the type of guy who likes to seek out well-made “cool things.” He says all this as a guy in his early 50s most certainly playing the part while wearing a white t-shirt with folded aviator sunglasses around his collar… and expressively gesticulating energetic hands. On one wrist he wears a leather bracelet and on the other is black-cased Raider Harpoon watch on a nicely aging brown leather strap. 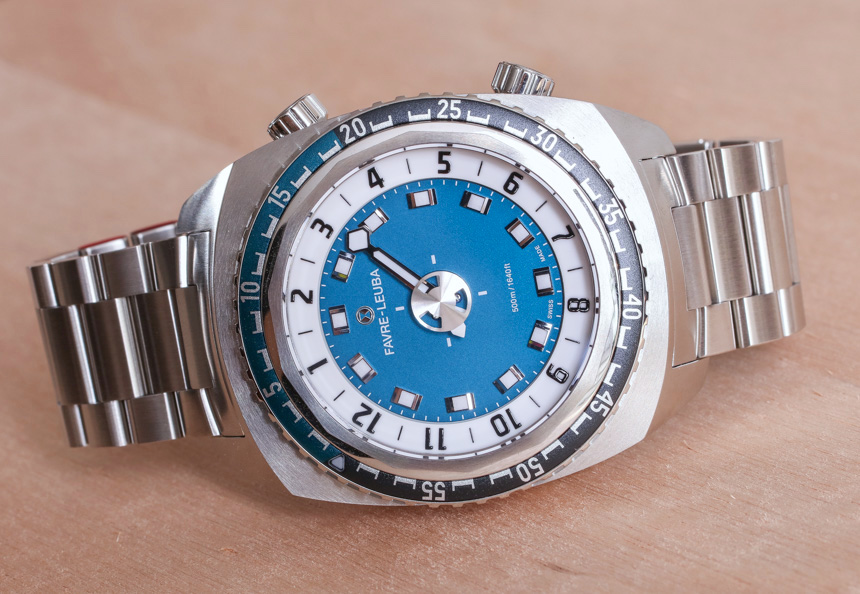 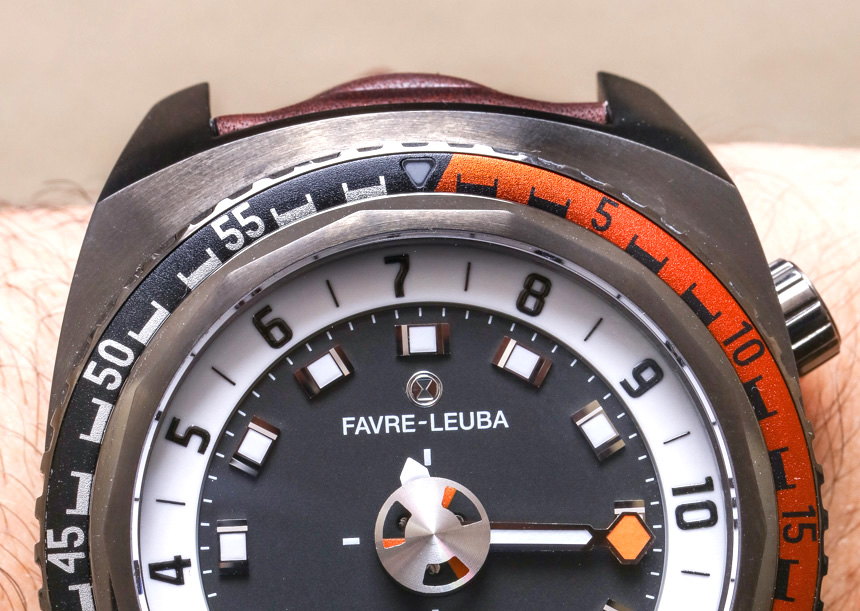 Ironically, as I am listening to this I am wearing the same watch on my wrist – but with my narrower wrists and in the position as the listener in this conversation I don’t think at that moment I’m pulling off the timepiece as well as Thomas. It looks great on him, matches his style, and sells the idea of the watch immediately. You see, I bring all this up because when it comes to more avant-garde timepieces such at the Raider Harpoon, I always like to make sure there is a demographic out there who will look good wearing them. 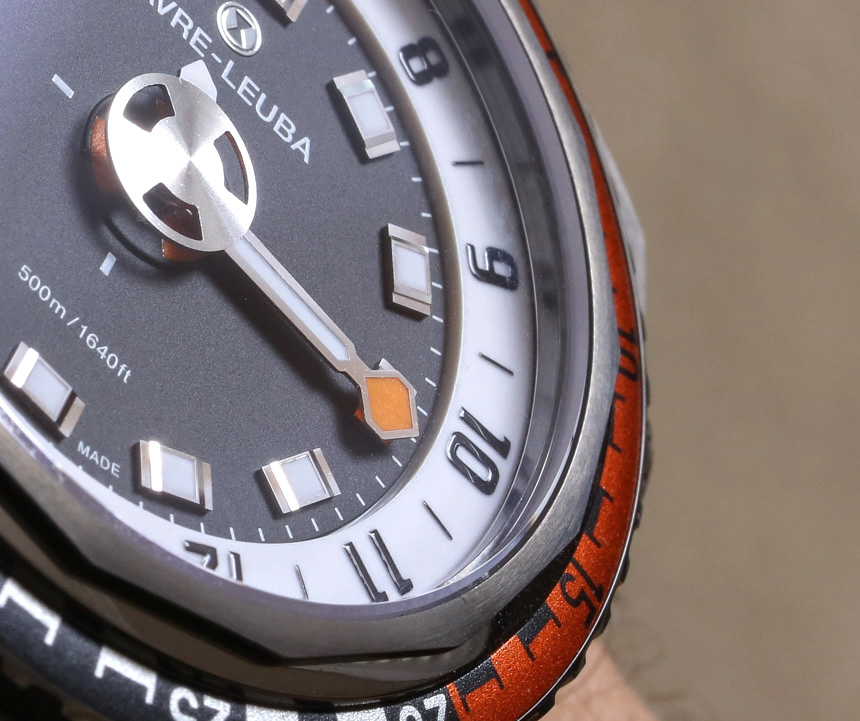 Removing for a moment the fact that Thomas is actually part of Favre-Leuba, you can nevertheless see why the watch appeals to him. First is the fact that the “heritage” name of the brand satisfies his European-instilled need for “legacy value.” A man like this is far less interested in new “unproven” names. Second is the bold, nostalgia-inspired 1970s sport dive watch design, which is not only hip from a contemporary style standpoint, but is also beefy enough to match his character. 46mm-wide watches are popular specifically because of guys like this. Finally, a loyal devotee of high-end watch culture, Thomas likes the system for telling the time, which creates an intellectual interest where there may not have been any before. 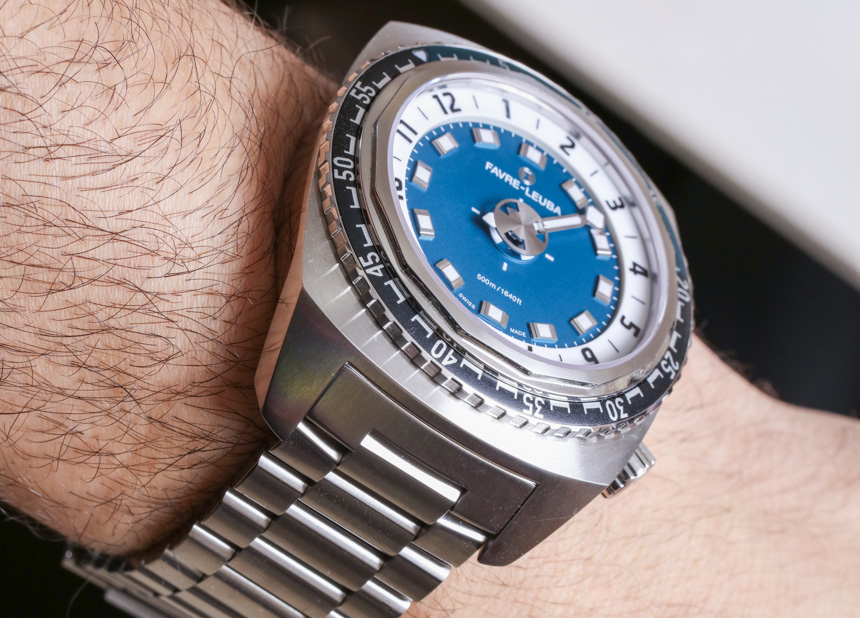 Favre-Leuba actually makes an extremely similar, albeit more simple, watch compared to the Raider Harpoon in the Deep Blue collection. The difference is that while the Raider Harpoon is 46mm wide, has a helium release valve, is water resistant to 500m, and has the unique system for telling the time… the Deep Blue case (which is almost entirely the same in shape) is 44mm wide, lacks a helium release valve (not that you’d really need it), is water resistant to 300m, and has a standard means of indicating the time via traditional hour and minute hands. 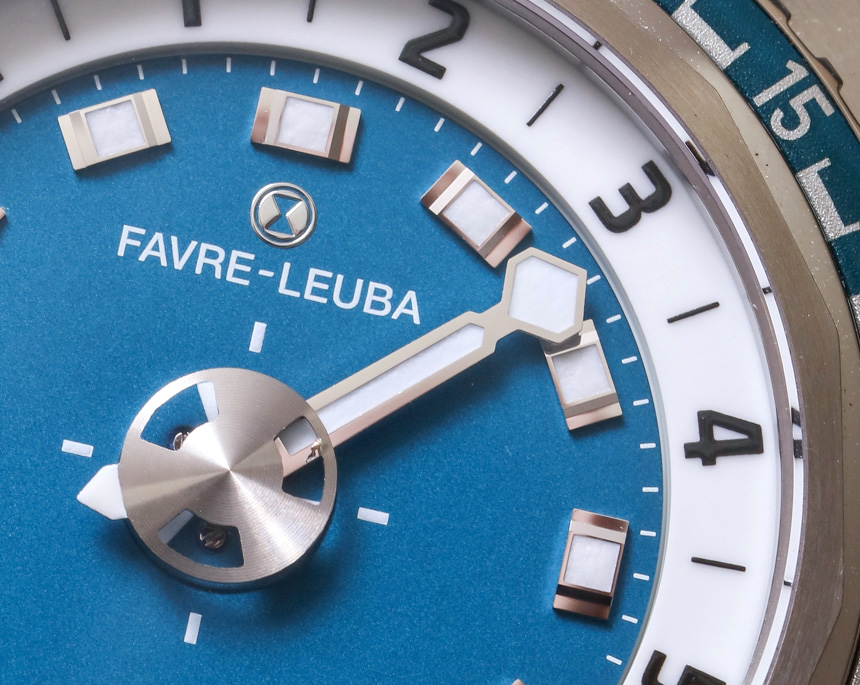 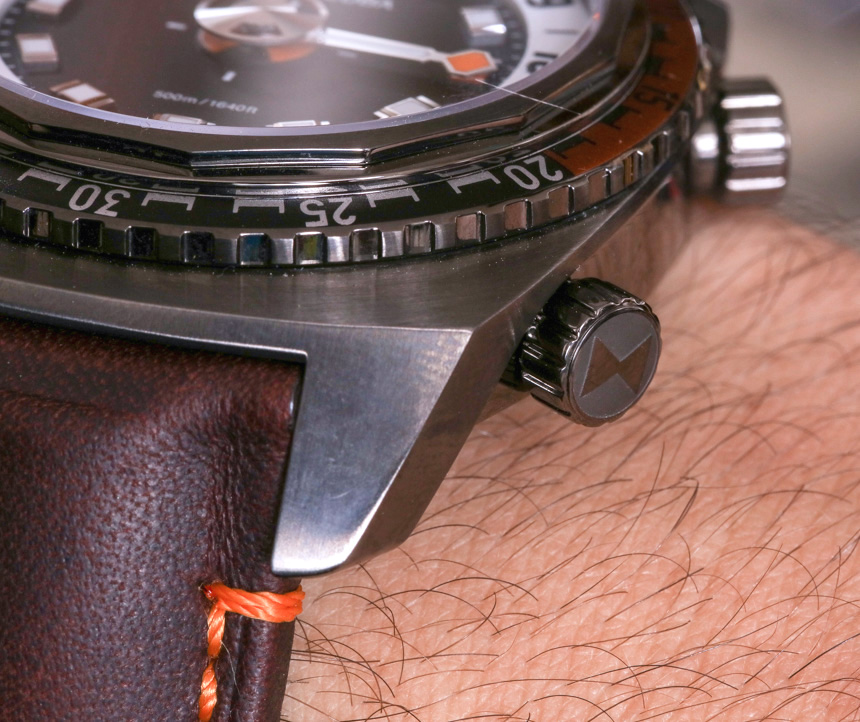 The model variants in terms of dial and case colors, as well as strap/bracelet combinations are identical. In fact, if you aren’t familiar with the fact that Favre-Leuba makes the Raider Harpoon and the differing Deep Blue models, the two are very easy to mistake for one another at a glance. They also have a bit more than $2,000 between them in price (the Deep Blue is, of course, the more accessible model). I mention this for a very specific reason which is if you like this watch overall, but feel it is too large, too expensive, or too unfamiliar when it comes to reading the time, the Deep Blue model is right for you. 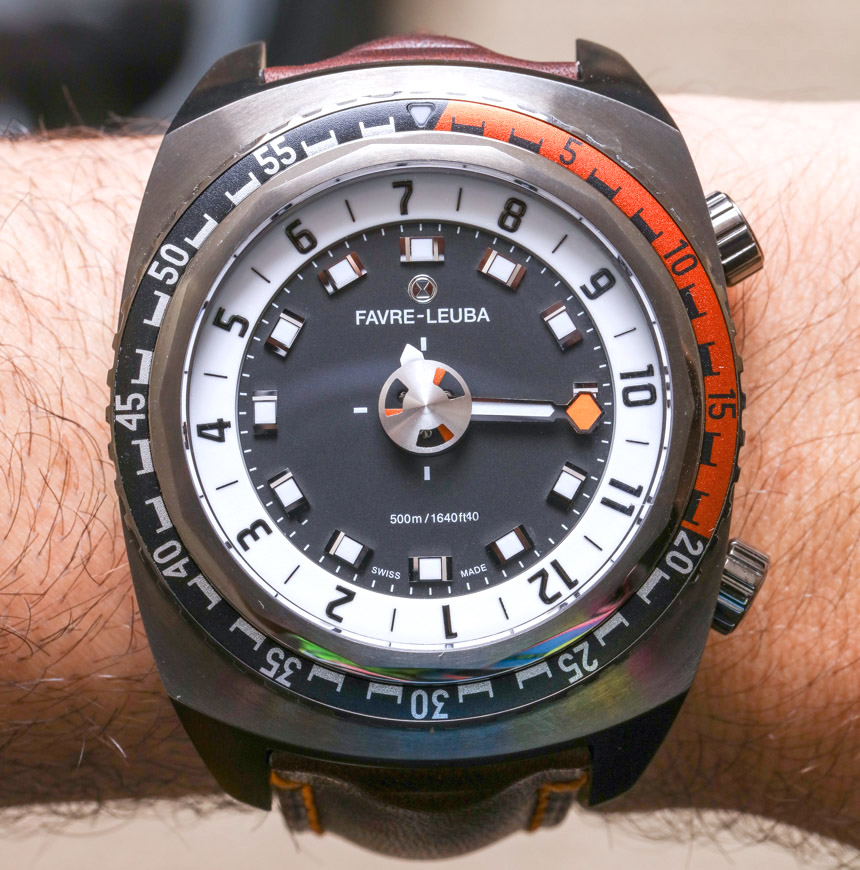 Let’s return to Raider Harpoon, since it is the model that I wore. I’ll first say that while I liked this watch, the 46mm wide case is too large for me. The issue isn’t just the width, or the roughly 18mm of case thickness, but rather the lug-to-lug distance of about 58mm. On my wrist (which is certainly on the smaller side), the lugs jutted out past my wrist like proud horns. If you have 7 inch in circumference or narrow wrists, that will likely happen to you. I am not complaining about the size – since I think it looks good on the right wrist – but rather telling those with wrists like mine that the smaller 44mm-wide model might be a better fit. 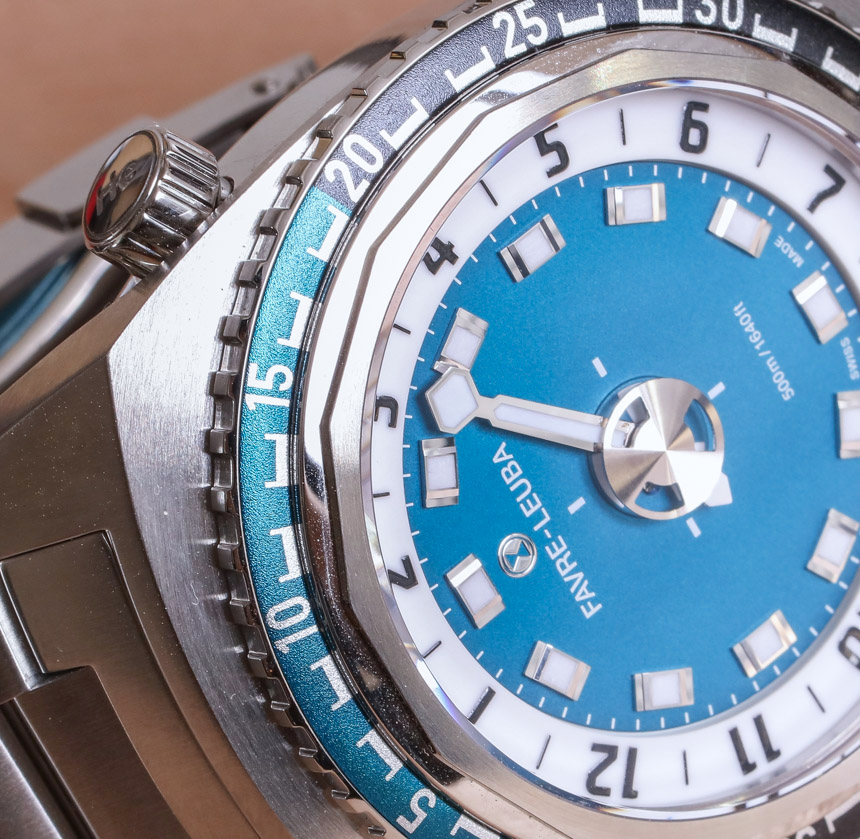 With that said, Favre-Leuba isn’t going for mainstream appeal at all. This is the first watch released by them with the fancy time-telling system, and it makes sense to be a bit more “niche” with its presentation – at least the first time around. Other than the size, the case is neat looking, with a combination of modern lines and those of a more or less (oblong) cushion-style case in steel that would not be that out of place in the 1970s. The case comes either in natural or PVD-coated “gunmetal” black steel. 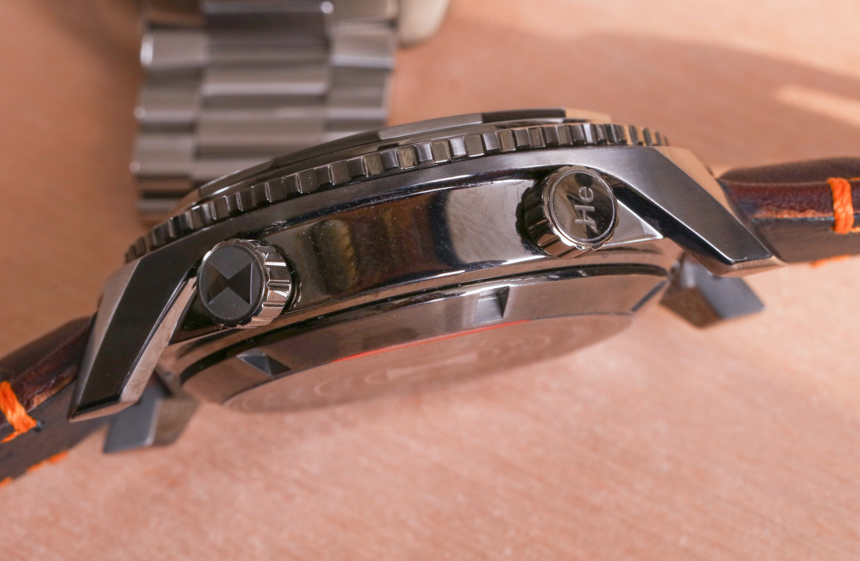 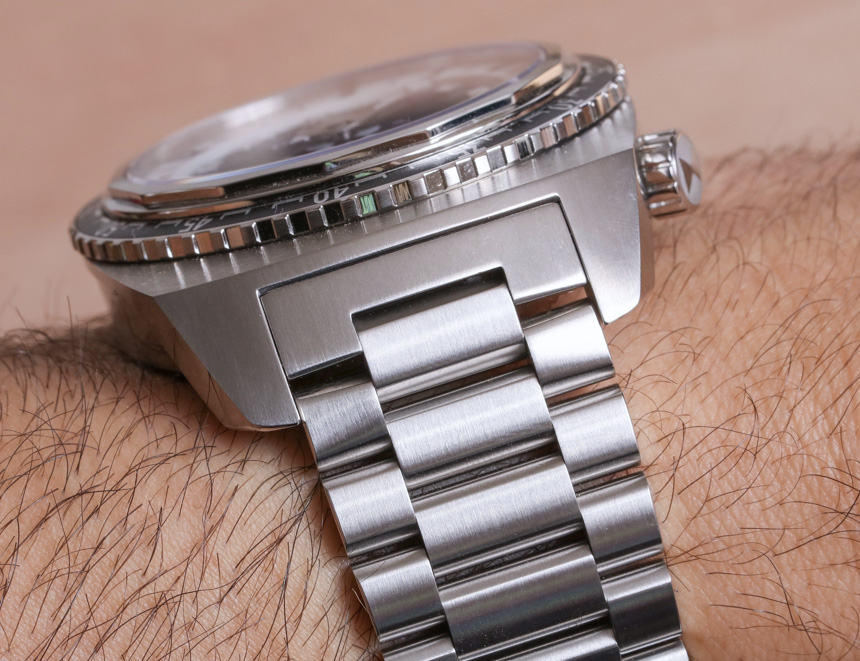 While I like the color of the gunmetal Raider Harpoon more, I prefer the finishing on the natural steel one. PVD-coatings are by definition a coating, and can change the look of a surface. Polished sections look a bit too glossy for a natural steel finish, and the more obvious brushed surface finishing elements capture your gaze in a more effective manner on the non-coated steel models. Having said that, the black and orange-accented dial look does go better with the dark case tone, while I think the blue-dialed model looks good with either case, but it best matches to the natural steel option. 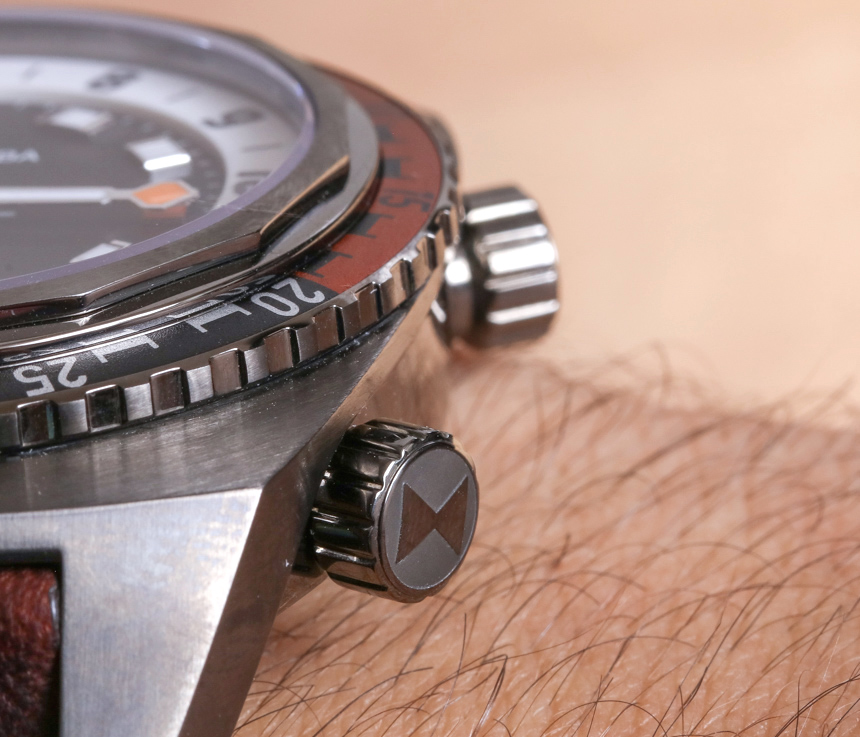 Heavy like a wrist-tank, the Raider Harpoon is a solid-feeling device. The thick sapphire crystal is properly AR-coated. Why properly coated you may ask? Because Favre-Leuba did the correct thing and coated both sides of the crystal with anti-reflective material. That is the BEST way to prevent glare. The 500m water resistant case has its visual strength emphasized by the overall design in features such as the screw-down style bezel right around the crystal. Outside of that is a relatively thin unidirectional rotating bezel – which is easily the most “retro” of all the hardware elements. The bezel works as designed, but doesn’t have the ultra-precise click position of some other high-end dive watches (admittedly a few are double the price or more of this watch). Also, the bezel insert is aluminum, which means it can scratch (but is also more akin to the look the brand is going for in the Raider Harpoon).