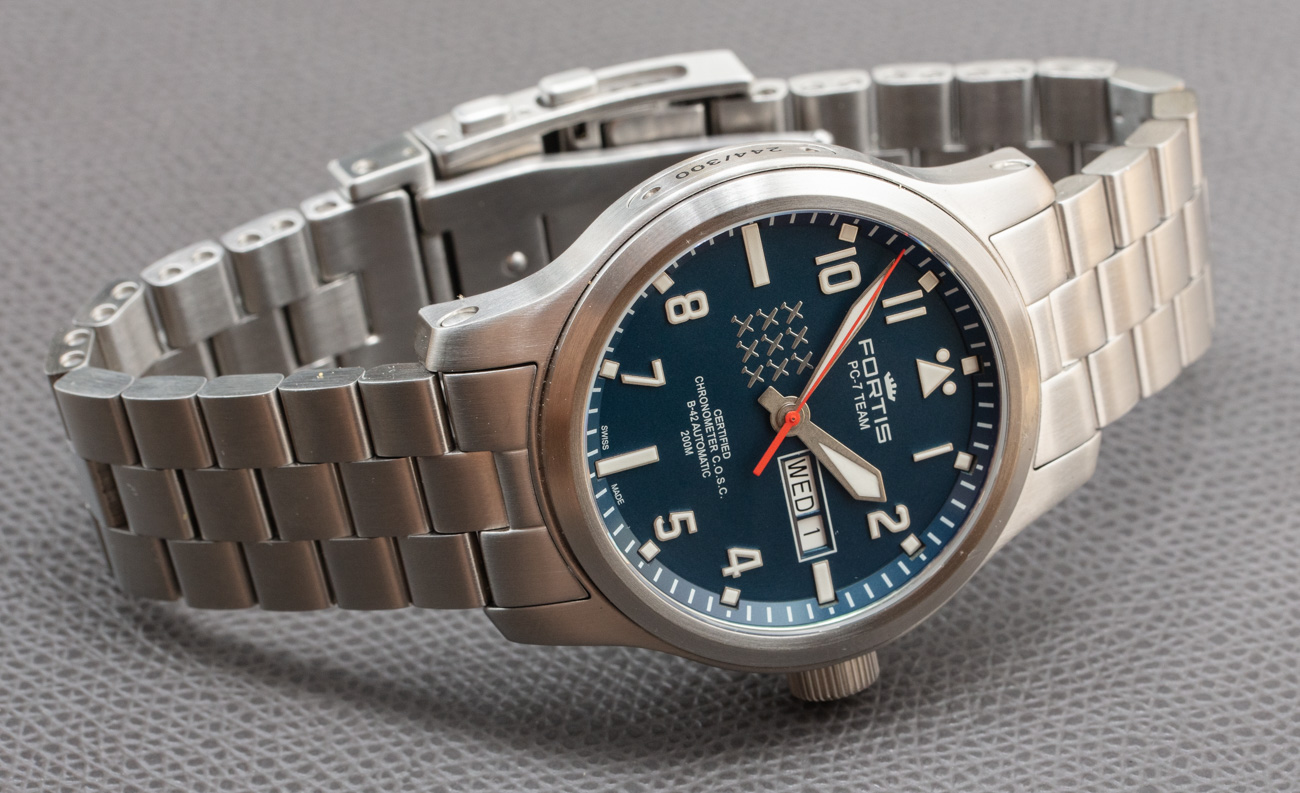 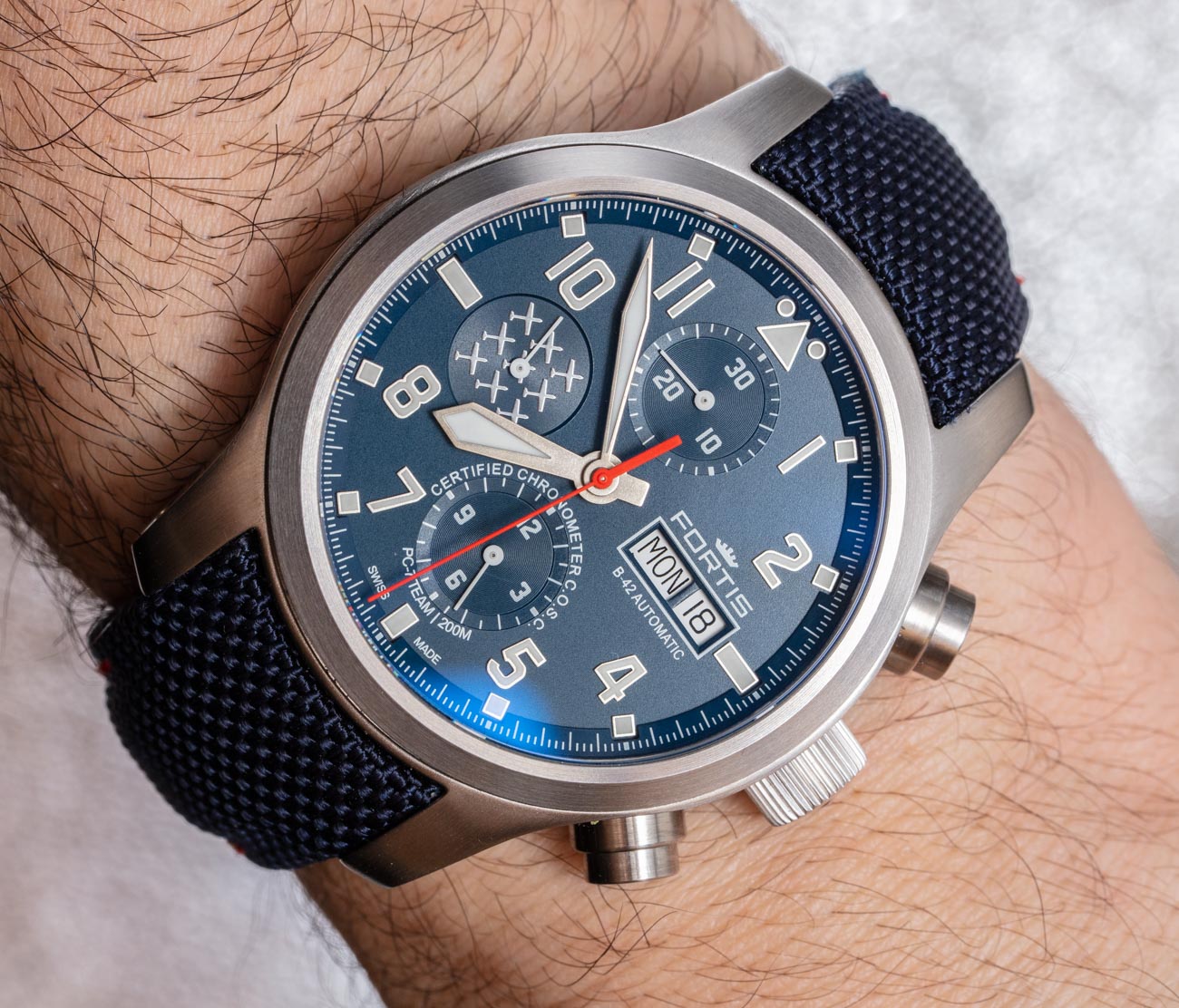 One of 2020’s newest limited-edition set of watches from Swiss Fortis is in its Aeromaster collection, which celebrates the 30th anniversary of the Swiss Air Force’s PC-7 flying team. Fortis has gone through some ownership changes over the years, and the latest people behind the storied Swiss watchmaker seem resolutely interested in upgrading the perception of the brand and the quality of the products (see our hands-on of the B-42 Official Cosmonauts Chronograph here). This limited-edition Fortis Aeromaster PC-7 Team set comes in two styles, each produced as a limited edition of 300 pieces. The price is, naturally, more than the non-limited-edition pieces, which is important for anyone who likes the underlying Aeromaster wristwatch product but, for whatever reason, isn’t emotionally connected to a Swiss military formation flying team.

I don’t know much about Switzerland’s PC-7 flying team, but I know that, in addition to it celebrating its 30th anniversary, the team is comprised of elite Swiss Air Force pilots who fly Pilatus PC-7 propeller stunt planes. Their limited-edition watches come complete with team colors (mostly blue with a hint of red), the logo which is placed both on the dial as well as the caseback, and a special box set that includes the watch, a matching metal bracelet, a snazzy leather and fabric strap, and changing tools. 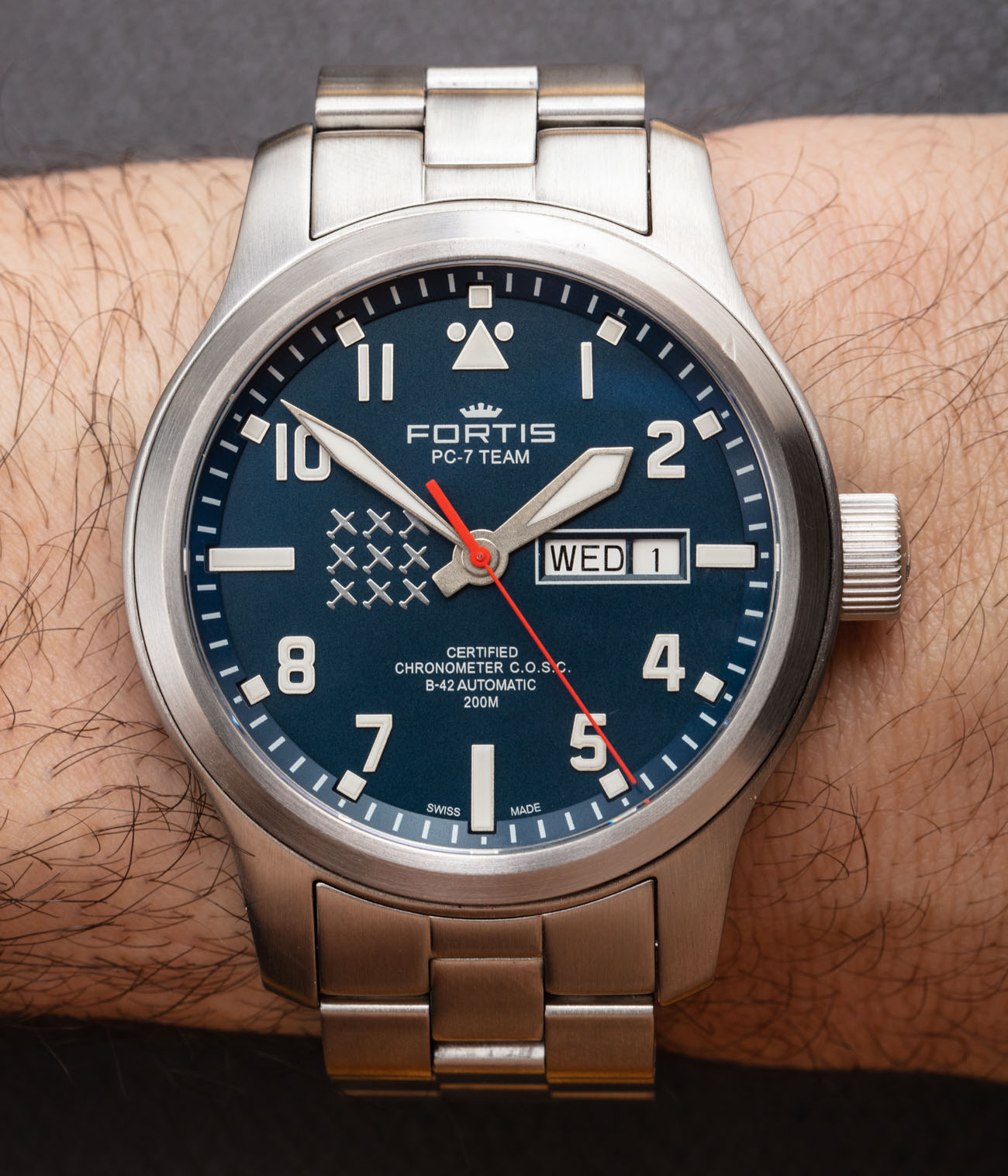 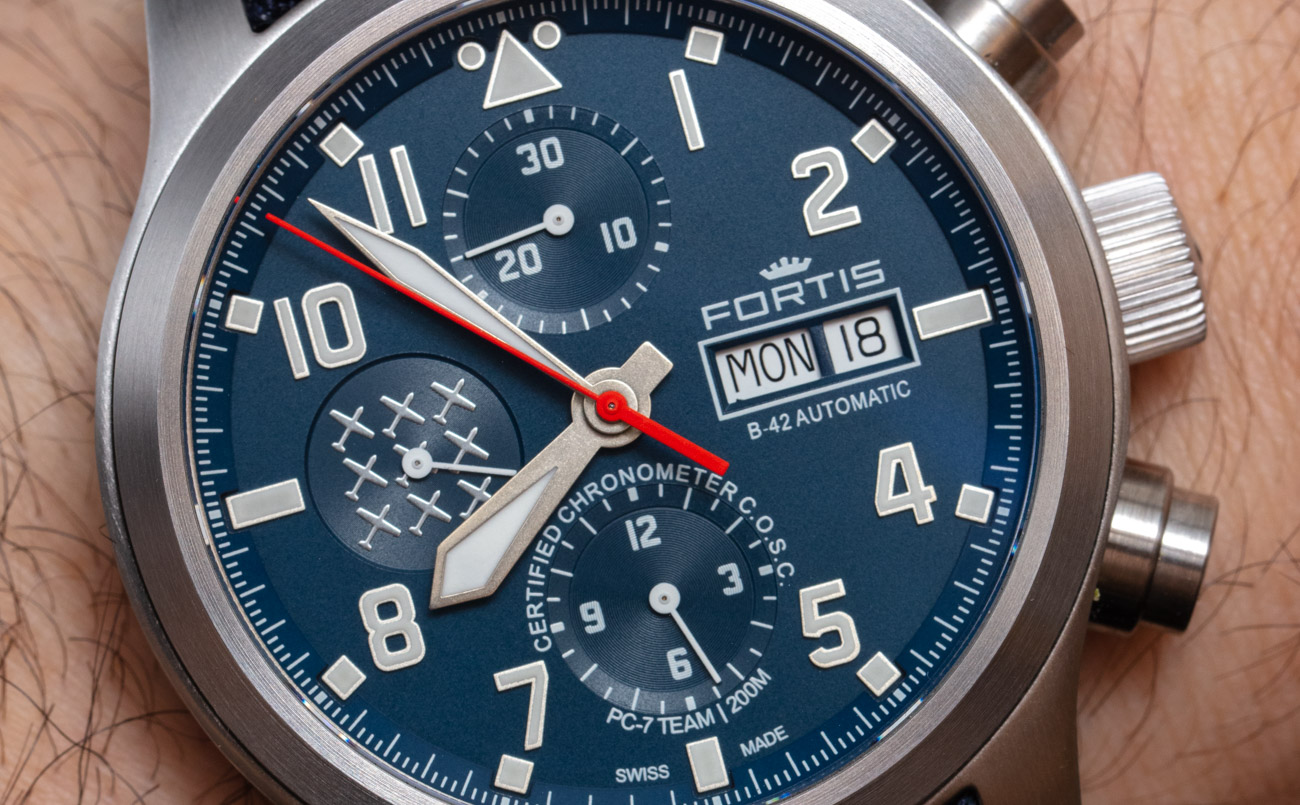 Compared to many other Fortis watches I have handled or reviewed, the Aeromaster is a product that exists in a slightly different category of quality. Here, we see Fortis not only attempting to enhance the overall level of detail and substance in its watches but also a product that clearly aims to pull in consumers who have, in the past, purchased timepieces from more expensive brands. The Aeromaster is not perfect, but it does have a lot of personality. It also happens to be a solid-feeling tool watch — something that any Fortis product should very much aspire to be.

The two watches in the PC-7 Team Edition set are the Fortis Aeromaster PC-7 Team Edition Day-Date reference 655.10.55 and the Fortis Aeromaster PC-7 Team Edition Chronograph reference 656.10.55. Each comes in a burly 42mm-wide case produced entirely from brushed steel. Fortis’ own website actually has a disclaimer that says, “Case size seems too big? It only seems that way.” I’m not entirely sure why that is on their website, but it is somewhat amusing to me. This is certainly among the larger 42mm-wide watches out there given its nearly 53mm lug-to-lug distance and nearly 17mm of thickness (despite having flat sapphire crystals). The cases are also nice and heavy with 200 meters of water resistance. This is ideal for those who like substance on their wrist, but might be a bit large for those seeking a more discreet modern-looking pilot-style timepiece. On the side of the watch opposite the crown is a small plaque that has the timepiece’s unique limited-edition number on it. 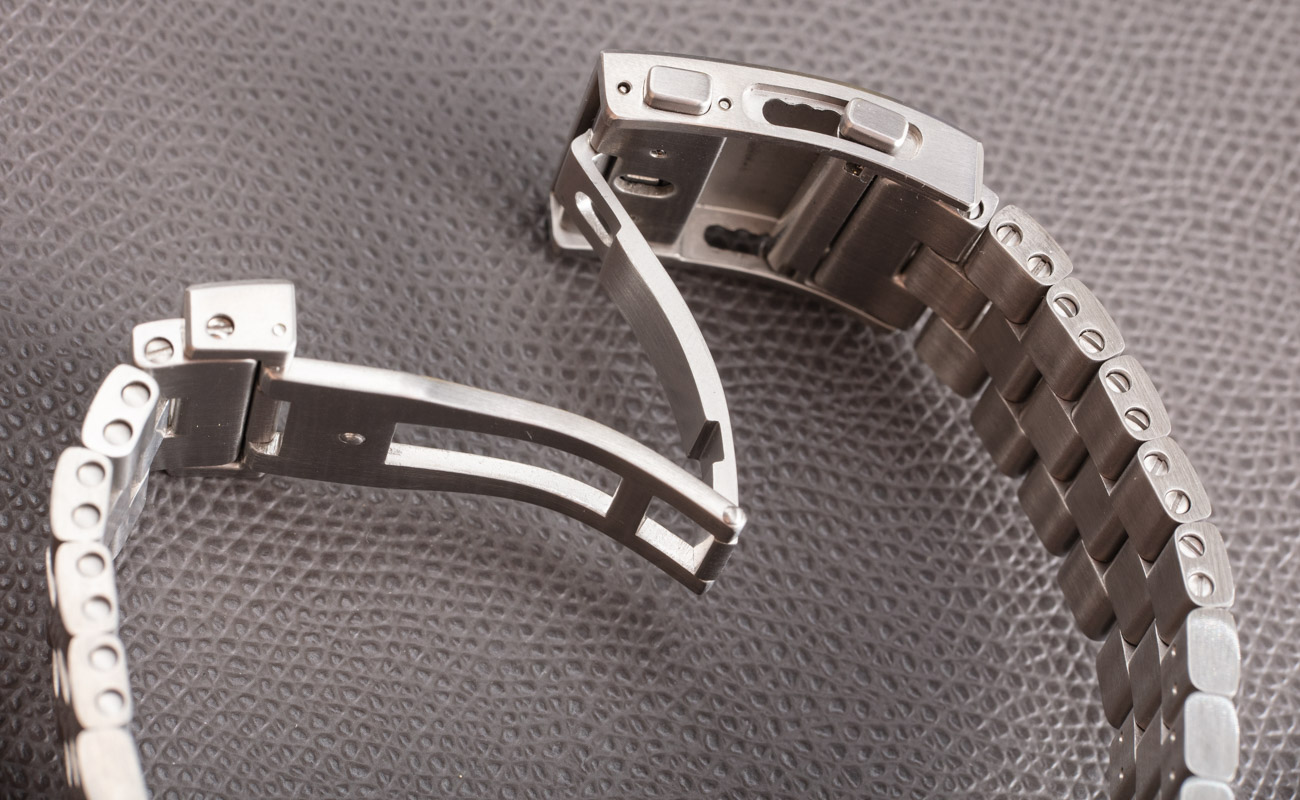 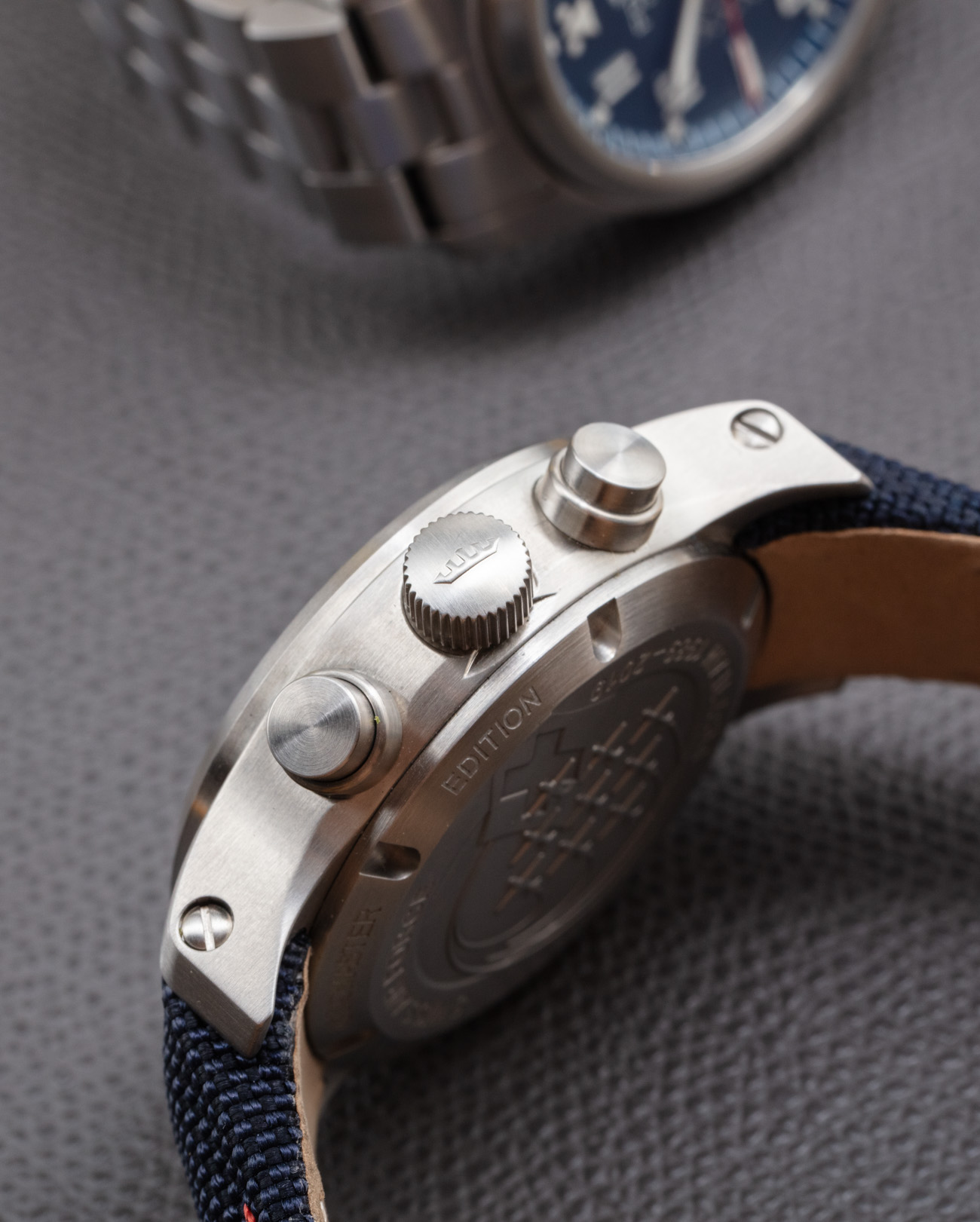 Helping to make the Aeromaster feel large are the seemingly big screws in the lugs that help attach the strap or bracelet, and also the larger-sized crown and pushers. From a utility standpoint that makes the pushers easier to operate, but overall the Aeromaster is a timepiece whose sense of size feels larger than its 42mm width might suggest. So, going back to Fortis’ statement on its website, I would somewhat disagree with the brand. That isn’t a bad thing since there are lots of people who will very much enjoy the proportions of the Aeromaster — but it would be wrong, in my opinion, to position it as something for people who worry about it being too large on the wrist.

The Aeromaster dial is very well done. That starts with a sapphire crystal that has AR-coating applied to both sides, as well as a dial that is mostly devoid of polished elements. The deep blue dial is topped with satin-finished and lume-filled hour markers, along with matching hands. Both versions of the PC-7 limited-edition watch have the “airplane tic-tac-toe” PC-7 Team logo positioned at 9 o’clock on the dial, and the hint of red is expressed as the color of the central seconds hand. The dial is one of the best elements of the PC-7 Team limited-edition watches, but that is also true of the Aeromaster collection, in general, which some of Fortis’ best-looking modern watches are part of. 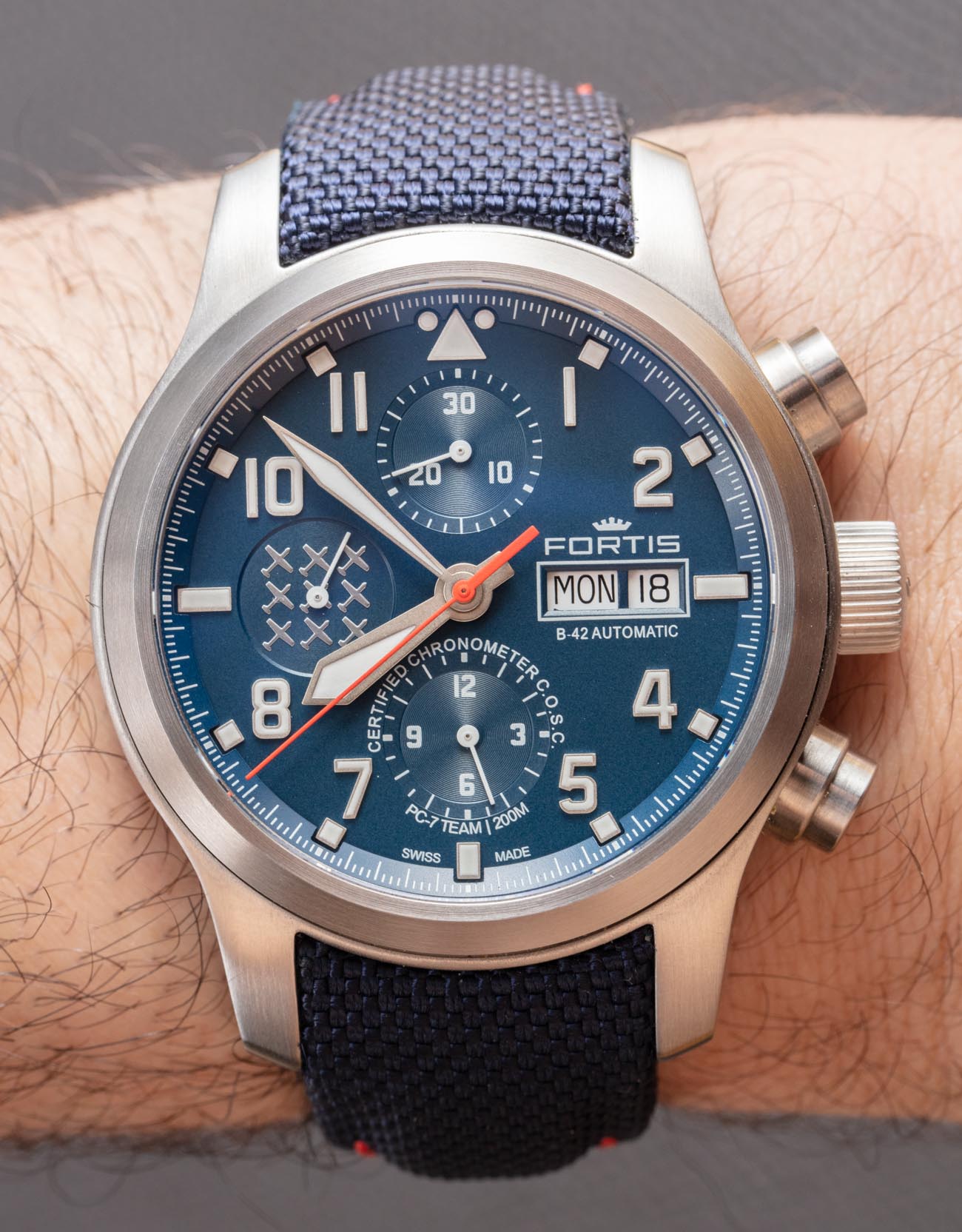 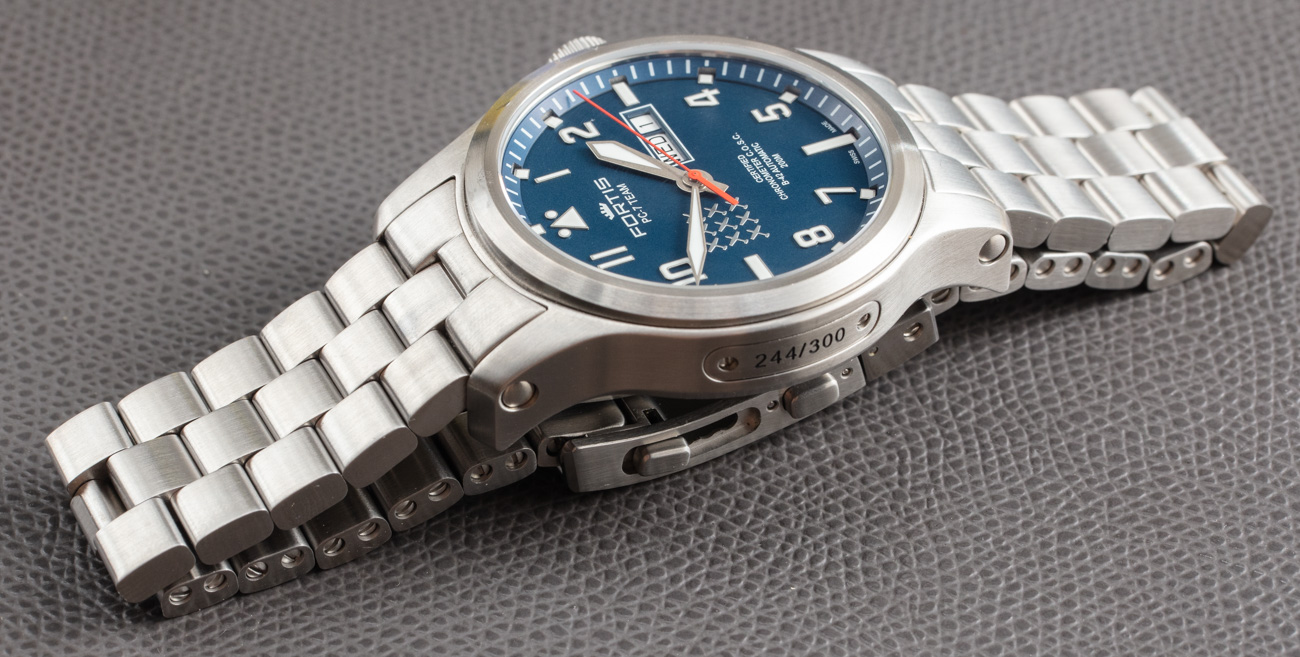 Each of the two limited-edition PC-7 Team Aeromaster watches comes with both a metal bracelet and a custom-fitted strap. While I am mostly a bracelet guy, I actually prefer the strap for this watches. That isn’t because there is anything wrong with the bracelet, but more about how it fits on the case. The bracelet juts out a bit, making the watch not wear as elegantly on smaller wrists such as my own. The different style of the strap is better suited for smaller wrists. Aside from having somewhat of a generic look to it, the bracelet is nicely made. The links are connected using larger-sized screws, and the deployant clasp further includes a micro-adjust system. I really think Fortis is on to something with the Aeromaster collection overall, but it could benefit from adding some models in slightly less chunky sizes and thinner overall proportions.

Inside each of the Fortis Aeromaster PC-7 Team limited-edition watches is a Swiss Made automatic COSC Chronometer-certified movements. The movements aren’t visible, but their Chronometer status is mentioned on the dial of the watch. Inside the Aeromaster PC-7 Team Edition Chronograph is a ETA Valjoux 7750 automatic chronograph (which Fortis calls its UW-50C movement), and inside the Aeromaster PC-7 Team Edition Day-Date watch is an ETA 2836 movement (known as the caliber UW-31C by Fortis). Both movements operate at 4Hz and, while they have slightly differing power reserves, they are both approximately two days when fully wound. 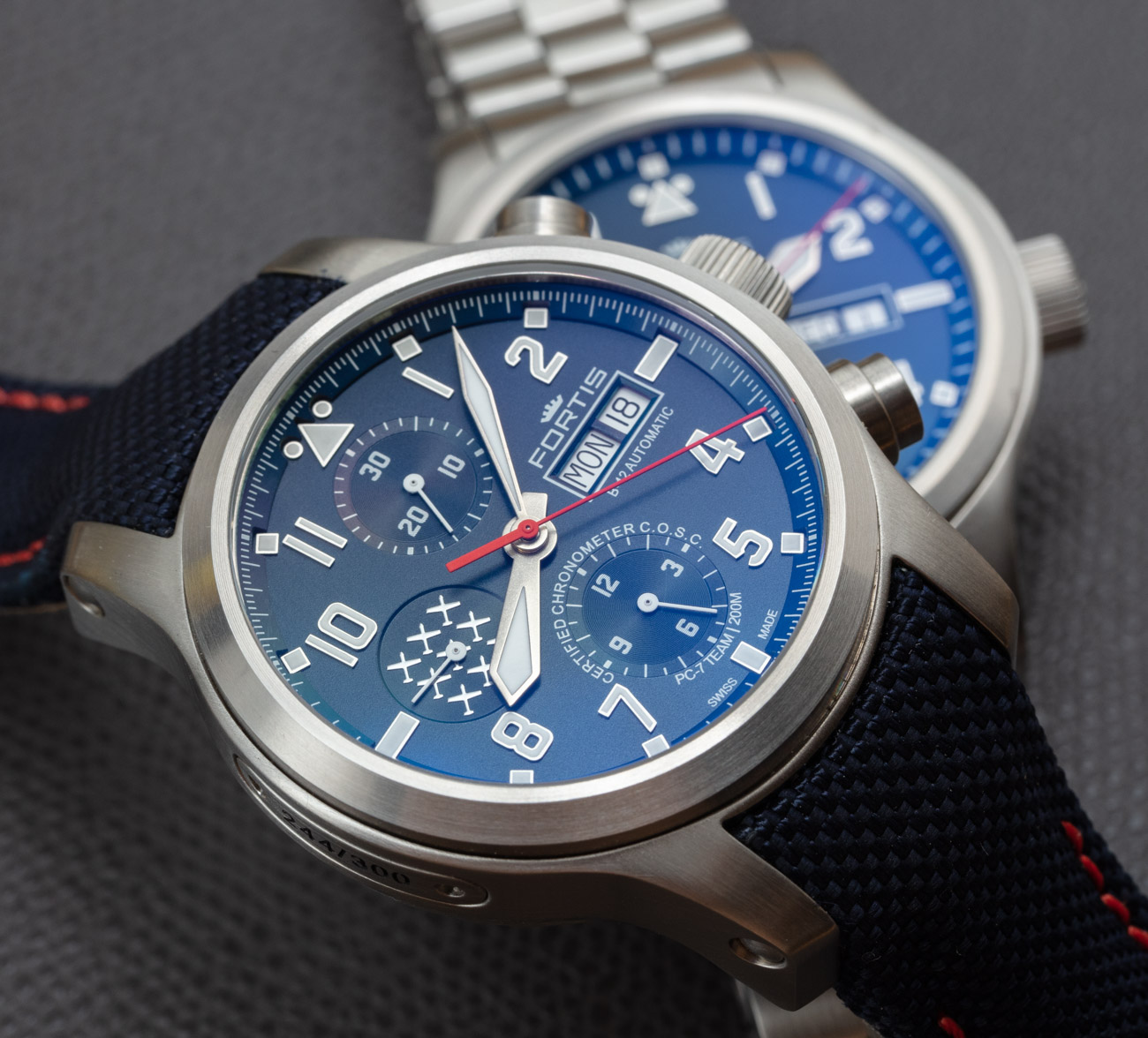