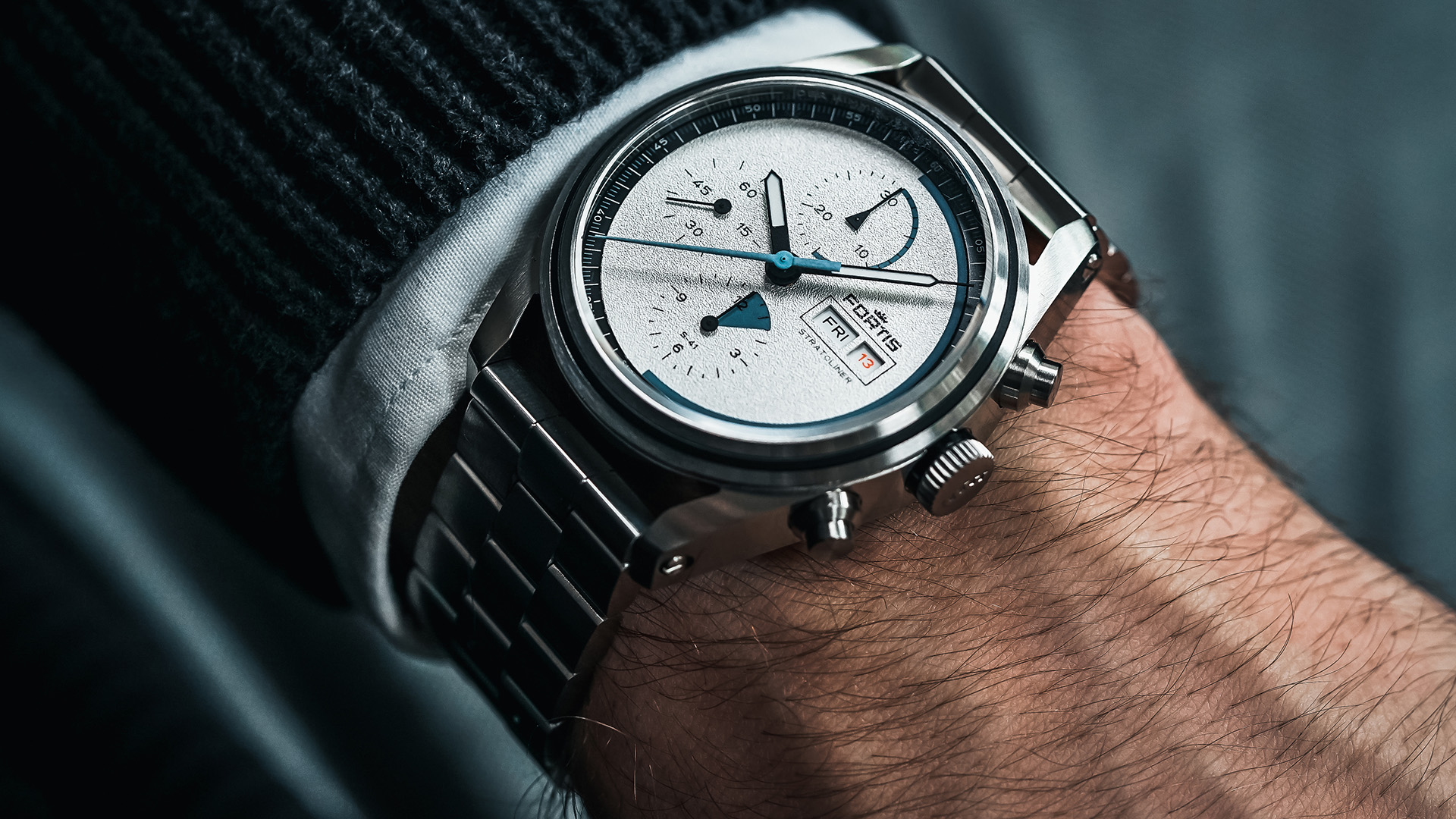 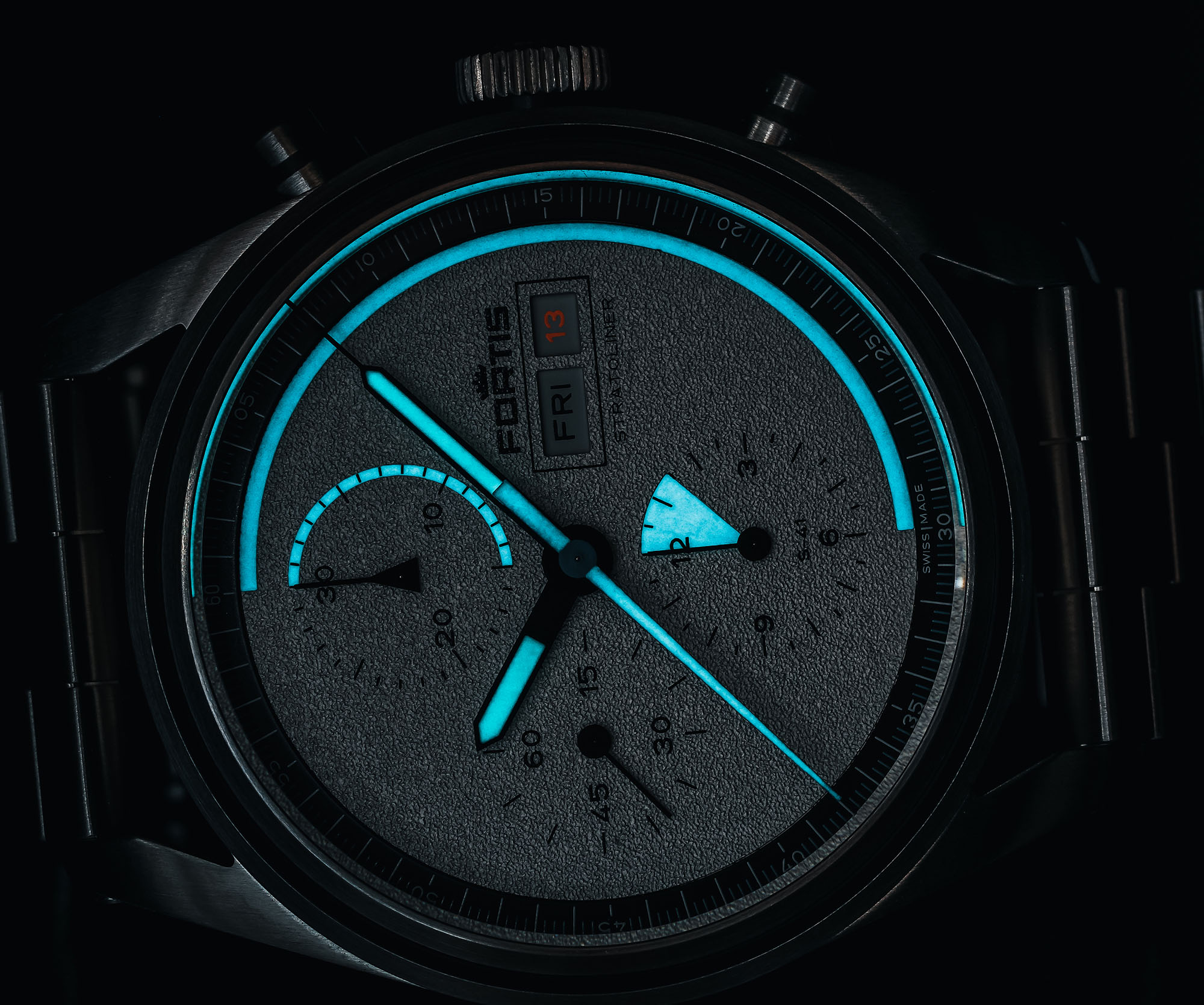 Independent Swiss brand Fortis caused quite a stir among enthusiasts when it announced its space-tested in-house WERK 17 automatic movement in April 2022, staking its claim as the first watchmaker to develop a movement specifically for the rigors of space travel. Since the announcement, however, the watch community has awaited the moment when this experimental powerplant would make its way into a regular production timepiece. Fortis delivers with its latest tool chronograph line, developed in partnership with the Swedish Space Corporation and featuring unique touches directly linked to Virgin Galactic spaceflights. The new Fortis Stratoliner series is built from the ground up with space travel in mind, but delivers an attractively clean and functional chronograph design for earthbound enthusiasts as well. 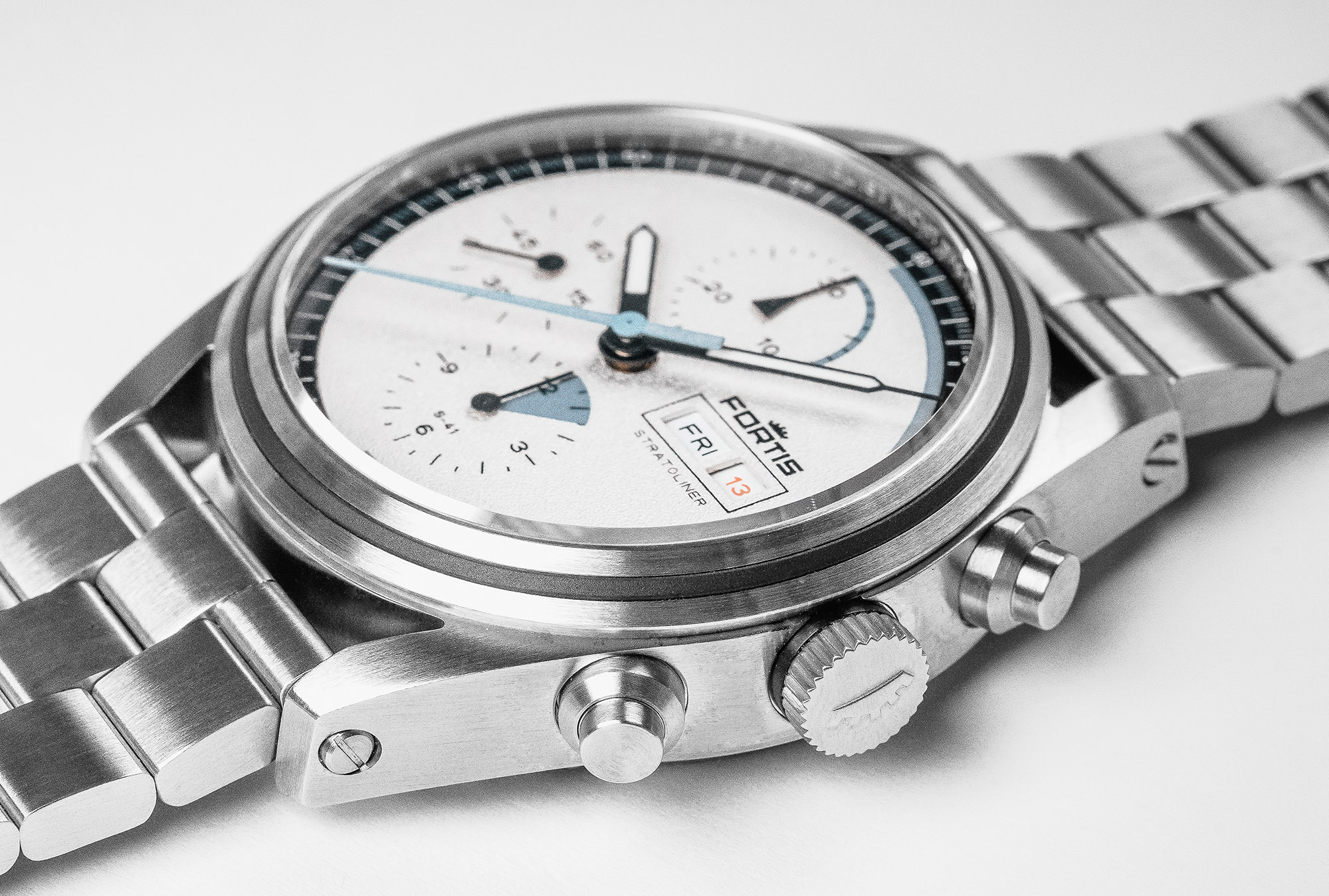 At 41mm-wide, the Fortis Stratoliner line’s fully brushed stainless steel case should provide a solidly wearable stance on the wrist. Although the case design is bluntly utilitarian and function-forward, Fortis still includes a handful of distinctive visual touches in images. The sharply angled lugs feature heavy, purposeful screws for securing straps or bracelets, reinforcing the durable and robust feel of the case design. Likewise, the broad, truncated inverted pushers impart an added dose of pleasingly chunky visual solidity, as does the prominent pillbox crown. For the smooth bezel, however, Fortis works to break up the monolithic case profile with a black rubber accent stripe that visually slims down the bezel design in images. Around back, Fortis fits the Stratoliner’s case with a sapphire display caseback, complete with moody smoked gray sapphire glass featuring a distinctive un-tinted window above the movement’s column wheel. Around the edge, Fortis emblazons this display window with the phrase “Der Himmel ist nicht das Ende der Welt” – German for “the sky is not the end of the world.” Although the Stratoliner’s aspirations are firmly pointed towards the stars, this case should be capable of underwater adventuring as well with a hefty water resistance rating of 200 meters. 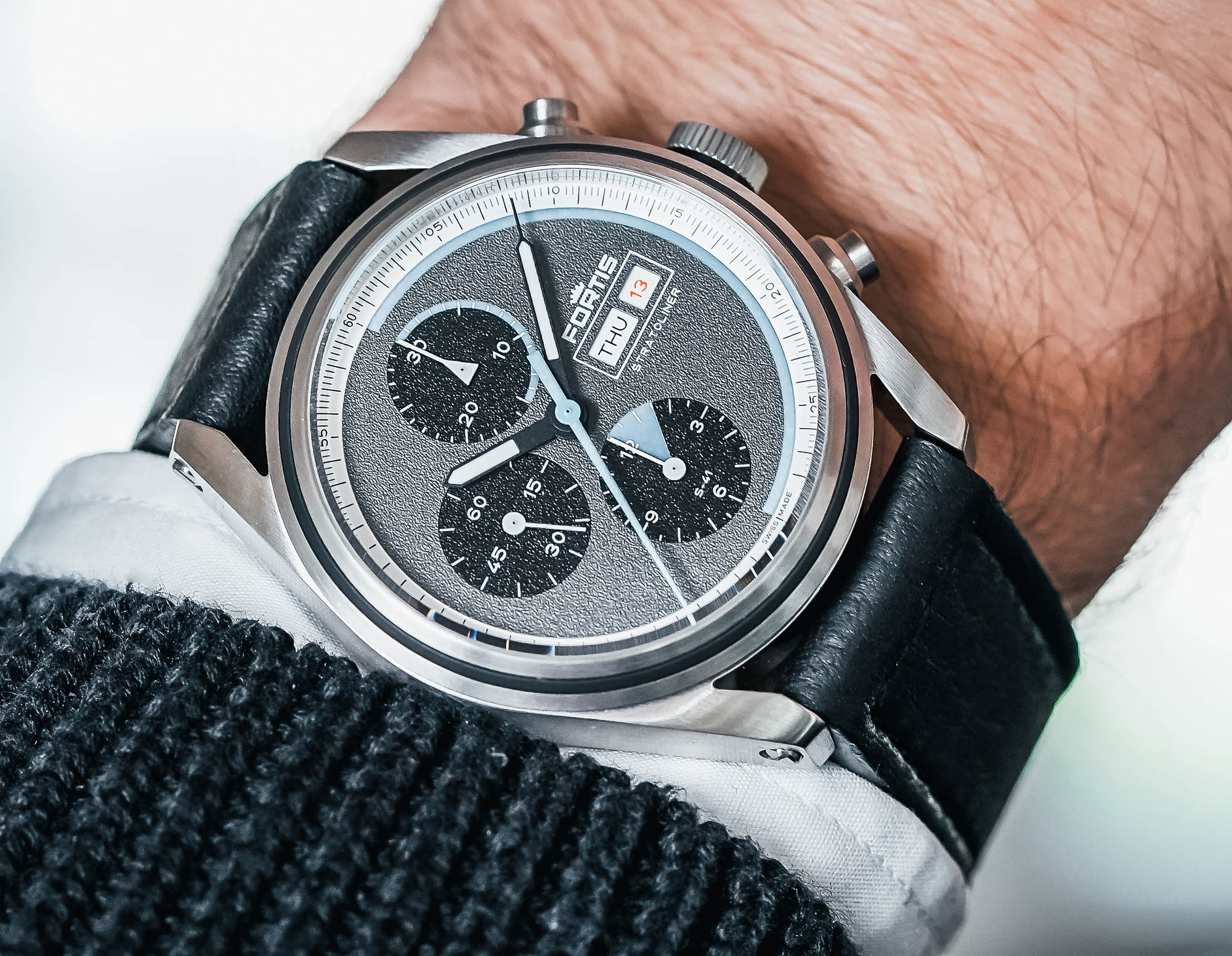 Fortis offers the Stratoliner series with a trio of dial colorways. Each of the three follows the same layout, with striking sky blue accents and a heavily grained matte dial texture the brand refers to as the “Dust Dial” finish. All three models also share the same syringe-tipped black handset, along with a day/date display at 3 o’clock featuring subtle orange print for the date window. The dial layout itself is minimal, open, and ultra-legible in images, but the use of blue accents for the chronograph subdials, central chronograph seconds hand, and outer minutes scale give this design a much-needed injection of personality. Beyond setting the design apart from its competitors, however, each of these blue segments is tied to an integral part of the planned Virgin Galactic passenger spaceflight experience. If the wearer engages the chronograph at the beginning of the flight, the blue segment of the 6 o’clock chronograph hours subdial can be used to track the mated climb portion of the experience – a 90-minute ascent where the Virgin Galactic spacecraft is carried beneath a “Mothership” airplane to its midair launch point. From there, wearers can stop, reset, and restart the chronograph to track the boost portion of the flight, where the spacecraft detaches from its mated airplane and launches toward its 110-kilometer apogee point at speeds exceeding Mach 3.5. This high-speed rocket boost lasts for 90 seconds, and the central chronograph seconds hand can be used in conjunction with the blue segment of the outer minutes track to monitor the final 30 seconds of the rocket’s burn time. Lastly, one final chronograph reset allows the 12 o’clock chronograph minutes subdial and its blue accent arc to track the Virgin Galactic craft’s 15 minutes of zero-g exposure before re-entry and landing. 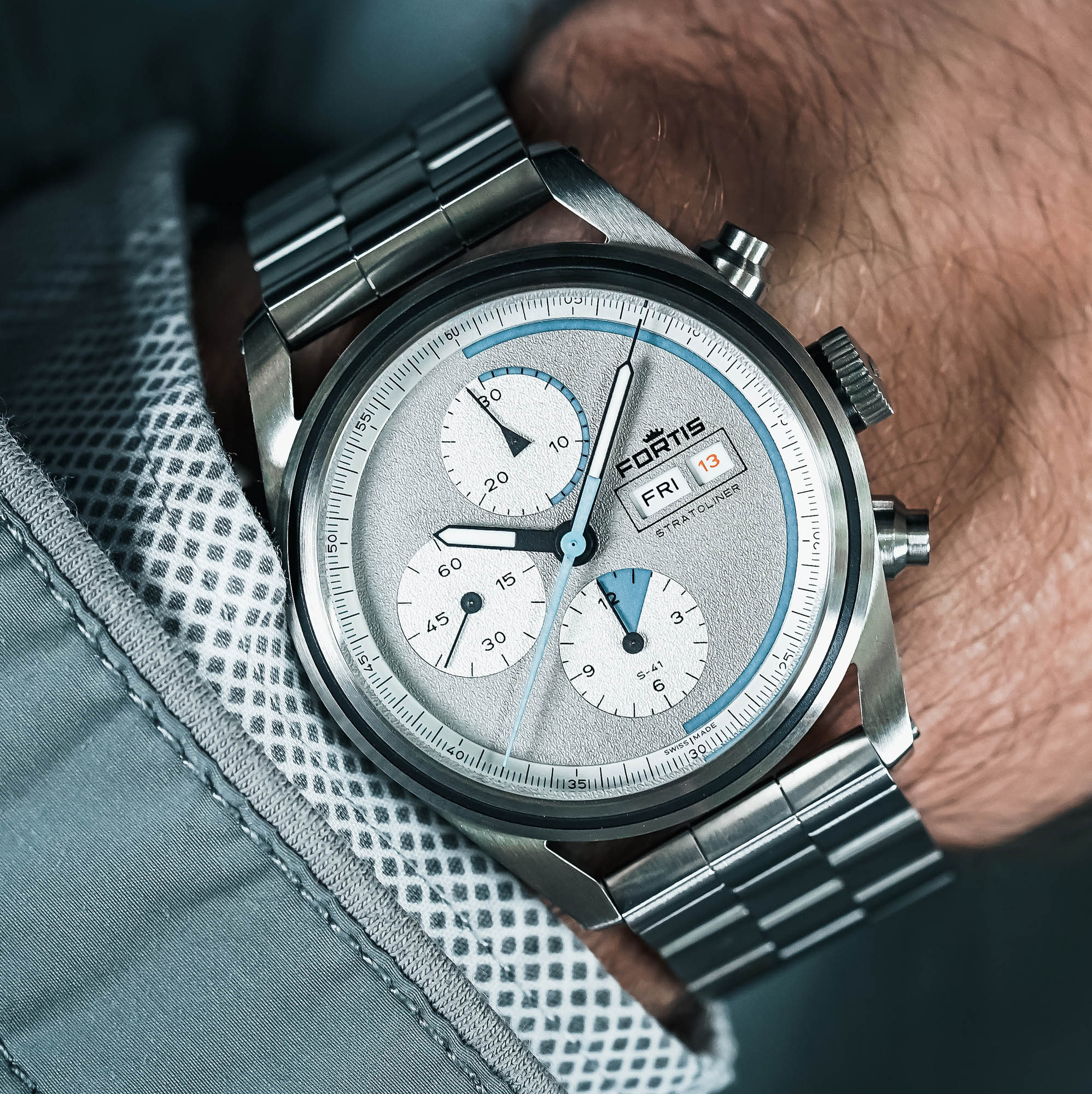 All three color options feel crisp and suitably astronaut-inspired in images, but each adds a slightly different personality to the overall design. The White Dust model offers the starkest and most simplistic look of the lot, with an eggshell white finish that reduces each of the three subdials to minimal open scales without harsh visual borders. The Cool Gray variant takes the most conventional and balanced approach to the design, with a utilitarian medium gray base dial brightened by off-white subdials and a matching outer minutes scale. For those looking for a darker, more saturated interpretation, the Cosmic Gray model’s anthracite main dial and black subdials give this version a moodier, slightly punchier feel than its stablemates in images. 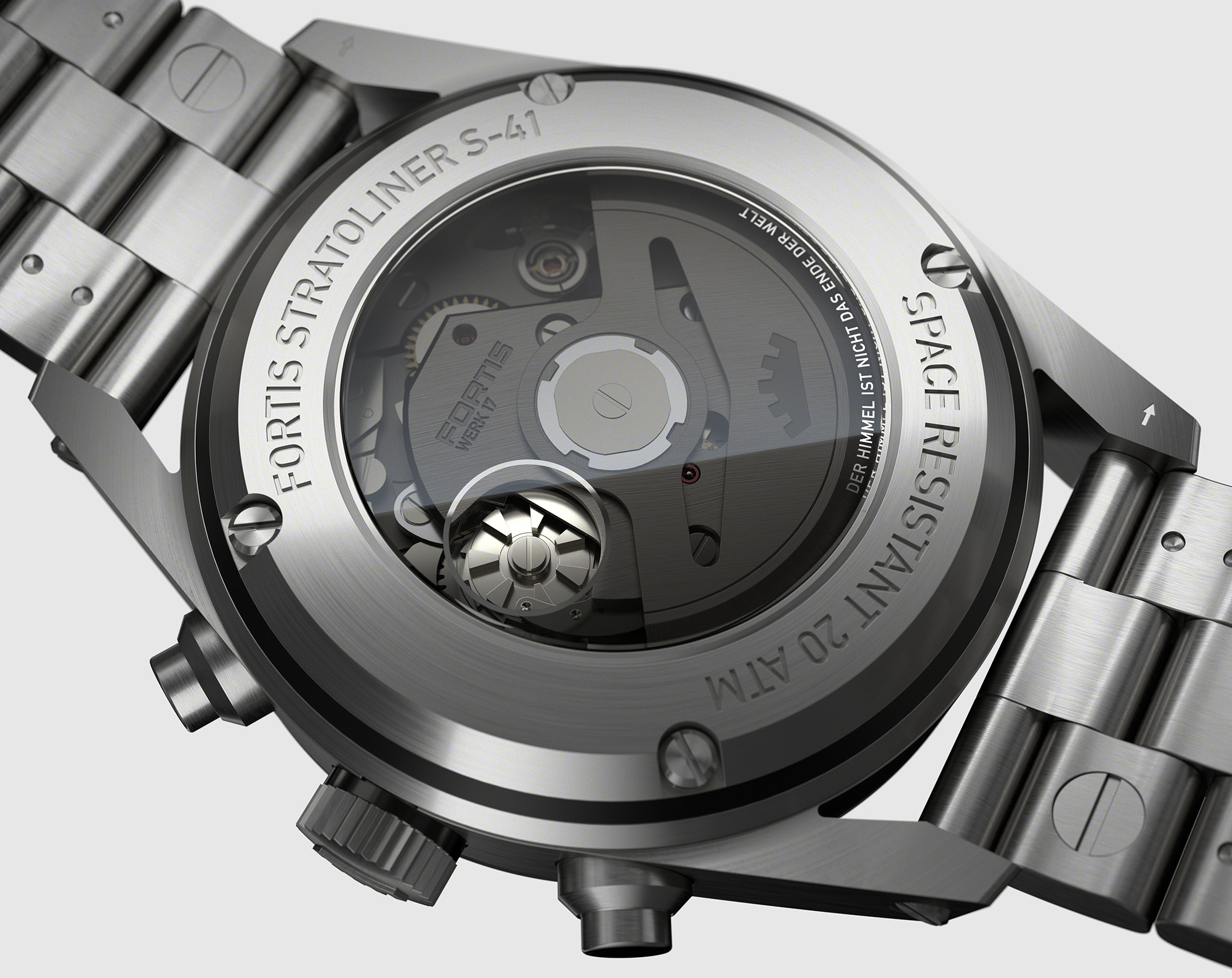 Fortis powers the Stratoliner series with its in-house WERK 17 automatic chronograph movement. Like the rest of the design, the WERK 17’s finishing is simple and function-forward in images, with basic brushing across the winding rotor and bridges. In terms of performance, the WERK 17 is solidly modern, with a 60-hour power reserve, column wheel chronograph actuation, and a robust shock-resistant traversing bridge. To complete the design, Fortis offers the Stratoliner series with a choice of either a simple black leather deployant strap or a three-link stainless steel bracelet with rarely-seen (and potentially divisive) straight end links. 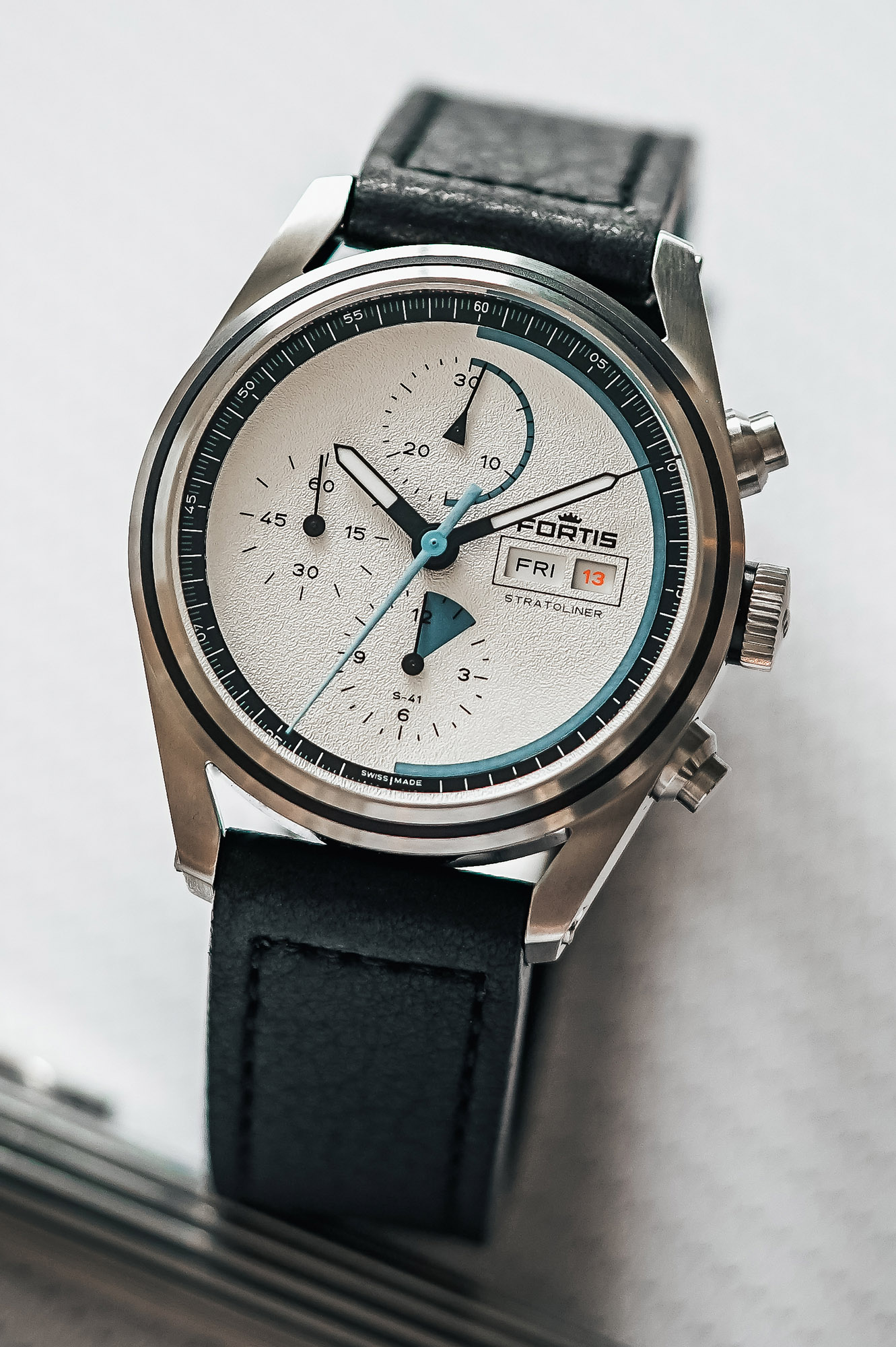