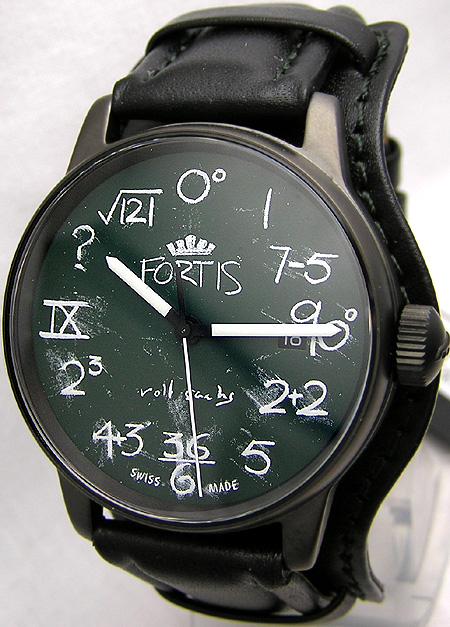 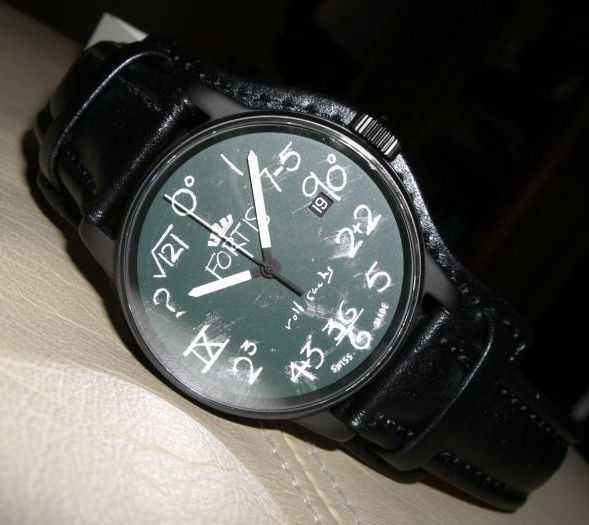 For the right mathematically inclined person, this is a charming watch with enough luxury elements to keep it from being a merely cheap novelty. Maker Fortis is like Omega, but for Cosmonauts, not Astronauts. The watch of the Russian space program. As such, Fortis has typically maintained a line of serious tool watches with function and durability in mind. Art watches are not their game for the most part. Then you have this watch, which is a decidedly different type of watch from the serious watch designer. This is the Fortis IQ, but if you aren’t taken by the watch, don’t think you lack… IQ.

Designer Rudy Sachs apparently always wanted to make this watch, and found Fortis to be an able and willing partner. Why Fortis? For good reason actually. Maybe of the brands loyalists are math fanatics or work in computation intensive areas. Programmers, engineers, pilots, etc… These people can afford the $1000 – $3000 range watches, and appreciate their handsome, no nonsense approach. Fortis figured that with a limited edition of just 999 IQ watches, it was worth testing out. And the watch is being well accepted by certain audiences. Personally, the watch is not for me, but I give it two thumbs up for character. And in some circles sales have been very impressive.

The PVD coated 40mm wide watch contains an automatic ETA 2824-2 movement for years of worry free duty. Fortis interestingly placed it on a bund strap, which makes it look over. All the black is meant to enhance the visibility of the white numbering which is actually luminant. Obviously you can take the bund backing off the strap to give it a more traditional look. Everything about this watch is strictly a Fortis in terms of quality and look, except for the face. Price is further along the lower end of Fortis’ range at about $1,050. 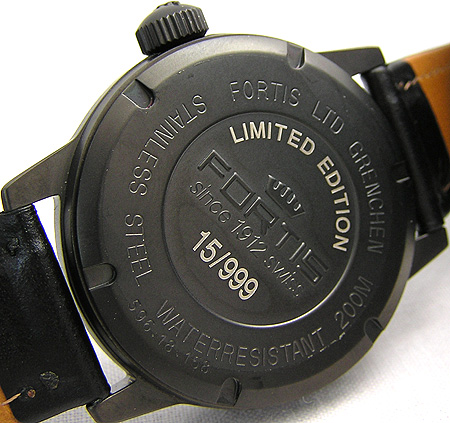 So the faux chalkboard look is interesting to say the least. The look is meant to reminisce times of equation drawing, re-drawing, and drawing again. Thus the appearance of erasures and chalk marks. Some might say it has the dial looking blurry, some might suggest it makes the dial look authentic. What I really do like is the crayon line drafting of the Fortis name and logo. Its really cartoon like and whimsical, which when well done, has a charming effect. Then of course you have Rolf’s name sketched below in barley legible frenzied mathematician on a chalk board writing.

Then there are the little equations that make up the numerals. I am so happy that I don’t need to solve an equation to figure out what time it is. That would be hell. Rolf did a decent job, and it looks pretty organic, though there aren’t equations for everything, some of the numbers are merely placed in their final value form. Oh, and the symbol for 10 is a question mark. This might be part of a word problem on the face I am missing, or he just couldn’t figure out a short version to have an equation for 10. If he just put 11, then it might look like a multiplication problem, and the answer would just be 1 again. Maybe this is some form of Germanic mathematical humor that just goes over my head. Will there be an attorney themed watch ever?