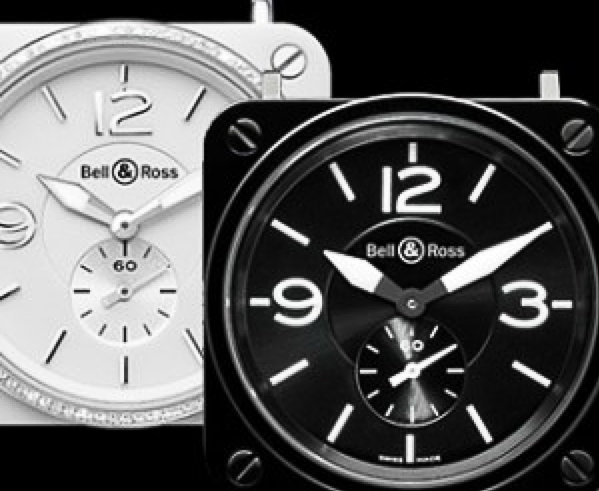 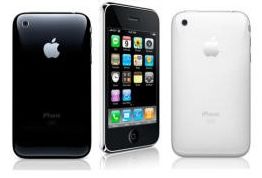 The iPhone is many things to many people. For many it is an item of high fashion, and a clear signal to phone companies that tools like mobile phones carry a fashion element along with obvious utilitarian function. Watch makers have known this for years! We know this. The new iPhone 3G comes with a black or white glossy backing, a difference over the first generation iPhone that simple had a polished metal back with a black plastic section at the bottom for the antenna (signals don’t penetrate metal very well). In addition the iPhone 3G sports additional hardware and software capabilities. The iPhone is able to receive higher speed data signals through 3G GSM networks, along with GPS location with the built in receiver. From a software perspective there are a few changes, most notable the ability to use (Apple approved) third party developed software. 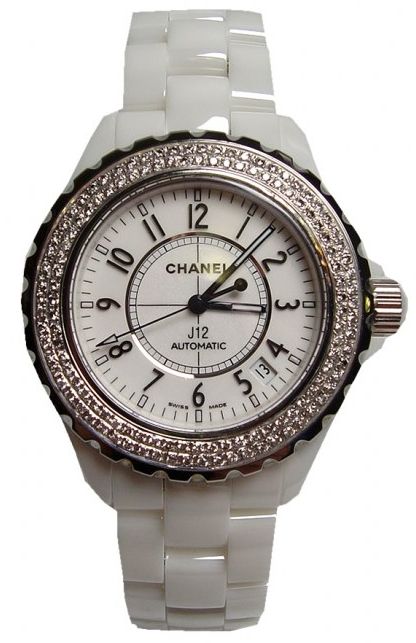 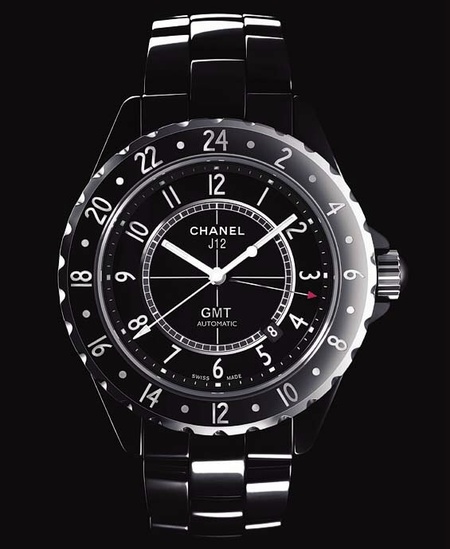 Although it has been more than a few weeks since the iPhone 3G’s release, there is still a lengthy line outside the Apple store here in San Francisco. A sign people care dearly about the looks of their phone, as there is really nothing that the iPhone 3G does that other phone’s do not. So for the fashion elite out there, here are four watches like the iPhone 3G that are fashionable and come in black or white.

First is the perennial favorite of the designer upper class. Designer by Chanel, for Chanel is the J12. One of the most popular ceramic watches around, the J12 made it OK for men to wear white watches. Coming in a variety of styles, sizes, and with or without diamonds, the J12 is a diverse watch which never succumbed to being glitzed garbage. Most versions feature well made ETA automatic movement with special editions fitted with tourbillons, and of course there is also the Audemars Piguet Chanel J12. Both the white and black versions of this ceramic gem are sized for men, although there are female versions available. Prices range from about $3,000 – $5,000 for most models with top range versions going for much higher. 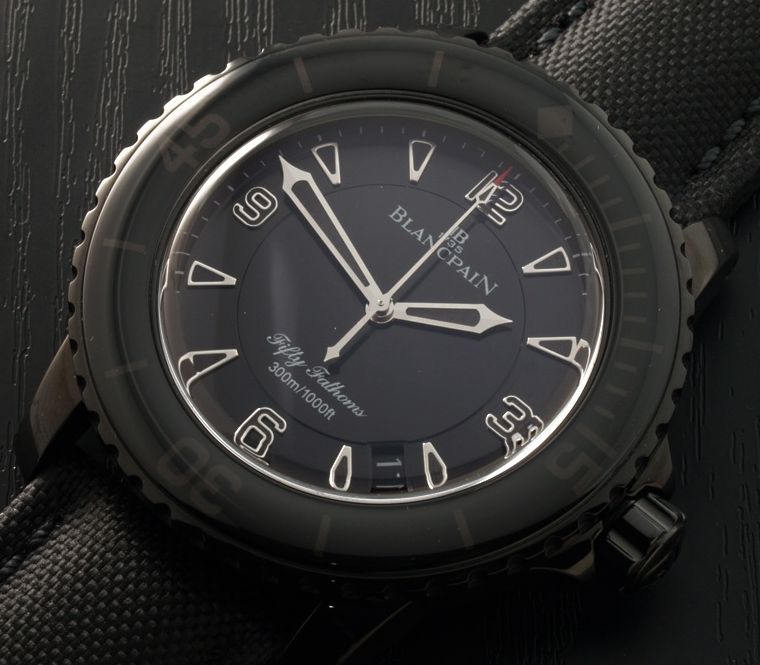 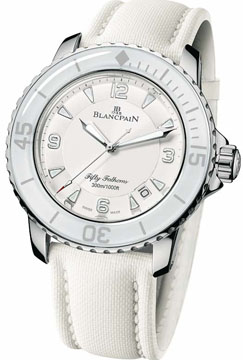 Next are new additions to Blancpain’s Fifty Fathom’s collection. A legacy watch line recently revitalized. This is one of the most capable and accurate mechanical watches on the planet with accuracy rivaling that of a quartz watch. Underneath the beautiful looks is a serious diving watch, so don’t takes its good looks as a sign of fragility. Inside is a manufacture made automatic movement, and on the outside is a special sapphire crystal covered bezel for hardness and beauty. The straps of the Blancpain watches are also unique as they are specially coated canvas, which make for durable, water resistance, and flexible straps. The black version is a stealth watch meaning that the numbers are black on a black face. One has to look straight at the watch to tell the time (at least that is sort of the idea). Despite the black numbering, the indexes still glow in the dark. This version is sometimes simply known as the Blancpain Fifty Fathom Black. One of the most interesting elements of the Black version is the case coating with is something a bit new for Swiss watches and quickly becoming popular. Using an ultra hard and scratch resistant compound known as DLC (diamond-like coating), Blancpain is able to get a rather glossy and exteremly durable finish the Fifty Fathoms Black, in a new way as opposed to the traditional used of PVD coating.

As opposed to the legacy “Fifty Fathoms” name (which is only about 90 meters deep), today’s Fifty Fathom watches are resistant of at least up to 300 meters. Size is nice and big with the case being 45mm wide. Everything about the Blancpain Fifty Fathoms is absolutely superb in terms of materials used and quality, as it should be for a watch in the $10,000 range. The new white model is named the Blancpain Fifty Fathoms Automatique. Which doesn’t make a whole lot of sense as all the watches are automatics. And what automatics they are. The in-house Blancpain movements are extremely accurate as mentioned before, and have a 5 day power reserve! Now that is impressive for such a hardy watch.  There are several black models in the mix, but the new stealth edition takes my pick as the most stylish. 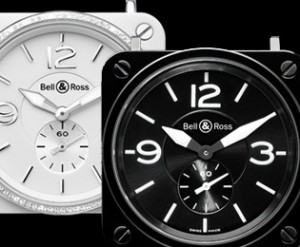 The Bell & Ross BRS line was discussed a while ago upon its initial debut. These are around the corner from being released and are a beautiful line of full ceramic watches from Bell & Ross. Styling is based on the ultra popular Bell & Ross BR-01 series, but represents a smaller (39mm versus 46mm) and thinner case. Both the white and black versions are stunning, and come with or without diamonds. The 39mm case is the perfect size to be considered “unisex,” as I can honestly see these watches being appropriate on both men and women (unlike the larger BR-01) watches. To keep the watch as thin as possible, Bell & Ross curiously chose a manually wound mechanical movement. These are certain to become “the haute” Bell & Ross in the fall when they are released. Expect retail prices to start in the $3,000 range for Bell & Ross BRS ceramic watches without diamonds.

It should also be known that there is a slightly different and larger white Bell & Ross watch in the BR-03 line which is also ceramic with a 42mm wide case. This white BR-03 Bell & Ross watch was released before the BRS line, and cleared the path for the notably more chic and sophisticated BRS ceramic watches. 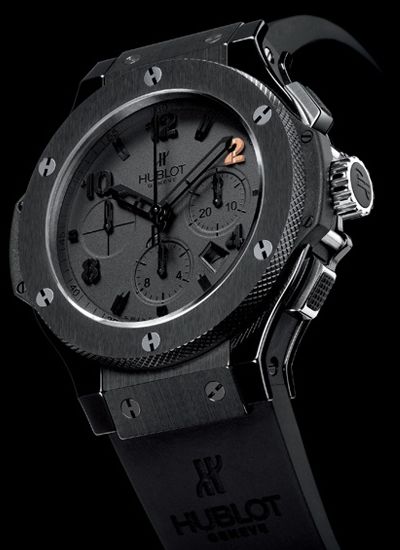 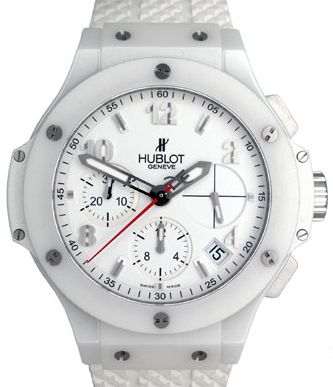 Realizing the market success of its Big Bang series, Hublot could not pass up a chance to release several all black or all white versions of the popular watches. Two notable Big Bang watches for our purposes is the white Hublot Big Bang Aspen, and the aptly named Hublot Big Bang All Black. Funny enough, Hublot places a gold number “2” on the face of the watch that while quirky, seems to fit in nicely. While the Aspen is not the only white Big Bang, and the All Black is not the only black Big Bang, these are probably the most recognizable and well done of the black or white models in my opinion.

If somehow the Hublot Big Bang watch is new to you, it was the watch that not only saved Hublot, but also made the once small watch maker in serious market force that was snatched up by LVHM to join their growing watch group (which also includes Tag Heuer and Zenith). Most Big Bang watches features exteremly well functioning automatic chronograph movements and uniquely legibile faces. Hublot prides itself on the variety of materials used in these watches which range for various types of exotic metals, kevlar, carbon fibre, rubber, ceramic compounds, and sapphire crystal. Price for a Big Bang watch can be be a really big bang to the wallet. Prices typically start over $10,000 and go way up for special editions. Hublot designers have a good time playing with the rich palette that is the Big Bang watch, and we can expect to see many more interations in the years to come. However, in my humble opinion, the All Black model is one of their best, and nothing stands out too much more than the Big Bang Aspen.

So there you have a rich (literally) assortment of watches that will look excellent on that iPhone holding wrist, whether you are using the phone for data or talking. You’ll need to be well appointed if you want to separate yourself from the countless others who will eventually be sporting an iPhone as well, and with one of these watches you most certainly can.