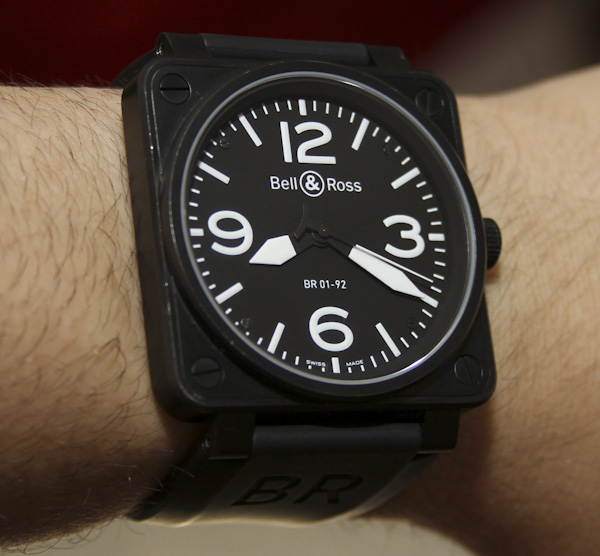 The BR 01 (BR01) watch collection is probably the most iconic timepiece of the Bell & Ross brand, and one of the most influential timepieces of last decade. Exactly where did it come from and why is it so popular? Bell & Ross as a brand is highly inspired by the German brand Sinn. In fact, one of the founders of Bell & Ross worked at Sinn, and early Bell & Ross watches were actually Sinn watches that were dual branded.

Sinn is sort of the anti-Swiss watch in theme. The brand offers high-quality tool and professional-use watches that are reasonably priced and have zero lifestyle marketing behind them. I believe at the time, the new Bell & Ross brand saw an opportunity to market the Sinn concept to a more lifestyle and fashion oriented demographic, while retaining the core look and functionality that made Sinn what they were. 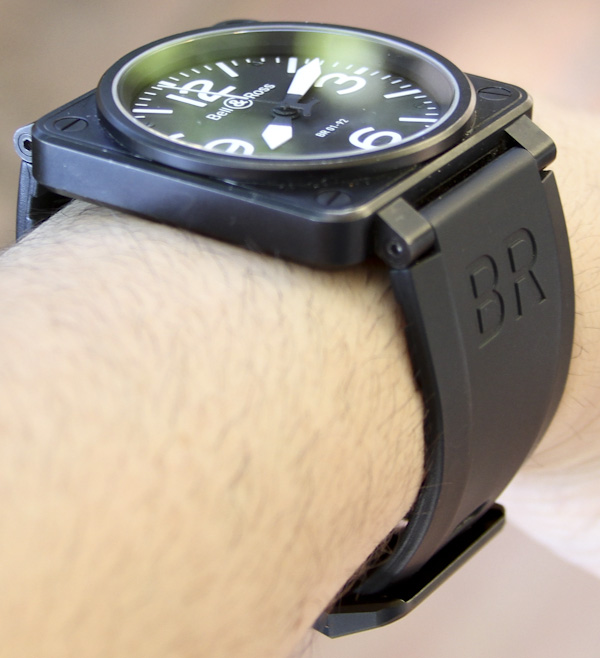 Soon after having success with offering Sinn watches in a new way Bell & Ross quickly started to develop its own personality and was among the first high-end watch brands that I recall ever noticing and lusting for. Born from historic military watches and functional instruments, the brand then (about 10 years ago), and now is still easy to love. A major part of that reason is that the majority of Bell & Ross watches feature very refined designs and dials that are often extremely easy to read. The mission of the brand was to offer a good-looking watch that said the people wearing them had good, but conservative taste, and weren’t afraid to get their hands dirty when necessary.

Using Swiss movements, Bell & Ross is a contemporary French company. Even their “vintage” models have a fresh feel, while the brand’s entire collection is modern through and through. How did Bell & Ross manage to retain this look while featuring a collection that is mostly aimed at the past for inspiration? I think it has to do with restraint. Design restraint. Most Bell & Ross watch designs are simple at first glance. There are a few key design features that make each piece what it is – without going overboard. I can only guess that this type of design process is difficult because rather than adding features designers often need to strip them away. 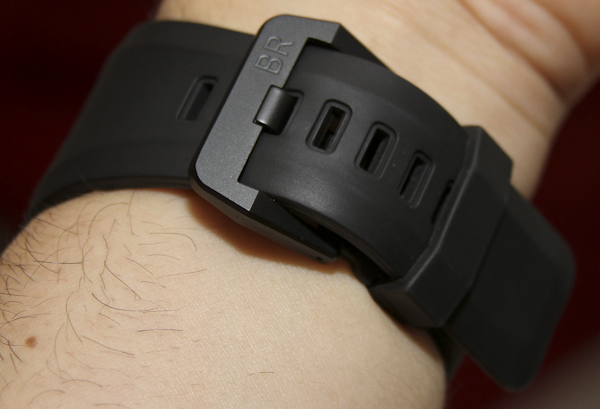 I mention all this because in my opinion it is particularly salient to the BR 01 models. The BR 01 is a watch based on the look of an airplane cockpit dashboard clock. Im fact, you could probably use it as one. The square case is modeled after the modular design of cockpit instruments complete with retention screws. Go in any number of airplane cockpits and you’ll see where the design came from. The design includes large hands, easy to see hour numerals, and perfect contrast.

The purest BR 01 design when it comes to honoring these plane clocks is the BR 01-92 Carbon. Black coated metal is preferred in cockpits because it does not reflect light that may hinder visibility. Also a black and white dial offers the best contrast for legibility. This model also removes the date window which was offered on other BR 01-92 models. Just the time with seconds – a pure dashboard instrument. 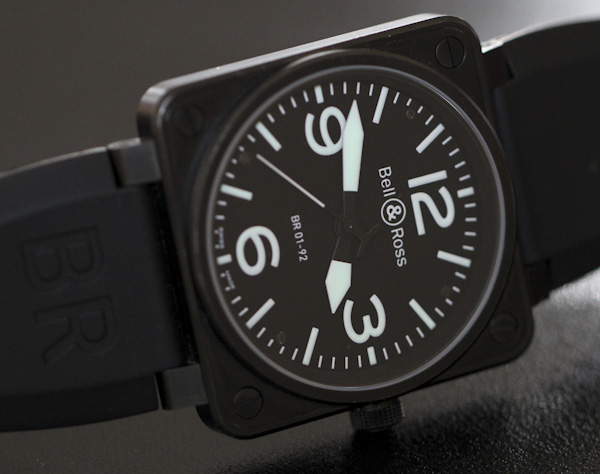 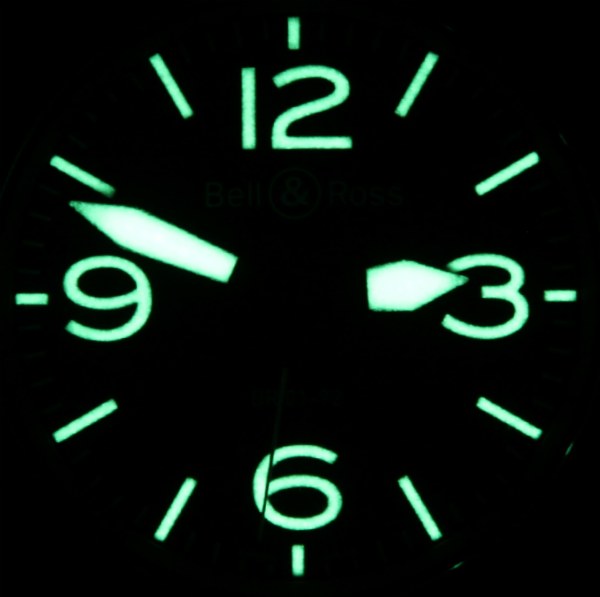 Bell & Ross has always in my opinion expertly shrunken down the plane clock for use on the wrist. Some of the little details are the best, such as the well-rendered hands and four dial mounted screws that match the four bezel mounted screws. The dial is clean and crisp with indicators that are slightly raised due to the healthy amount of SuperLumiNova used for lume.

“Shrunken down” is of course a relative term as the BR 01 is still a 46mm by 46mm wide square cased watch. When it first came out there was a lot of skepticism as to who might wear such a watch. The “big watch” craze wasn’t quite mainstream yet, and it look a lot of wrist time for people to be convinced that Bell & Ross was on to something. Nevertheless, Bell & Ross still released the slightly smaller BR 03 model a few years later to satisfy more wrist size preferences. Interestingly enough, as wide as the watch is, it feels very thin at 10.5mm thick. This low wrist profile is a major benefit of the design. 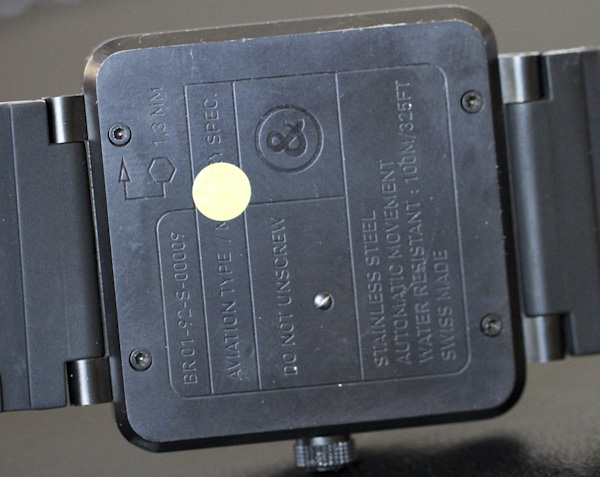 Personally I love the size and would choose the BR 01 over a BR 03 any day of the week. Other equally educated people might say just the opposite. The steel case is PVD coated black and water resistant to 100 meters. The sapphire crystal is AR coated for viewing ease. More little touches like the grating texture on the screw-down crown with engraved Bell & Ross logo are welcome bits. The large flat watch sits very comfortably on the wrist, which also means that while it is large, it won’t slide around.

One of the most clever design elements of the watch is how the straps integrate the lugs for a single, seamless look. The straps gently taper and are faceted (on the rubber versions) to help visually reduce the size of the watch. It is a quite refined and visually elegant strap design, while also being very simple. Also offered in leather, nylon Velcro, and other straps, the best strap for the BR 01 is still probably the rubber strap. Beautiful in it design, the strap is matched to a sexy buckle and is effortlessly easy to wear and comfortable. 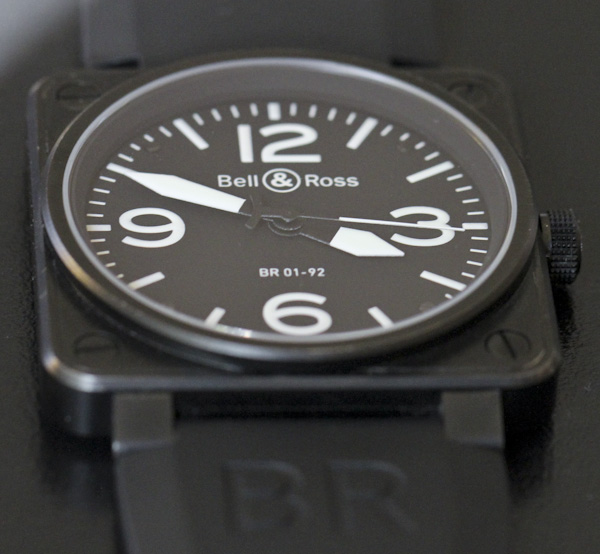 Inside the BR 01-92 is a Swiss ETA 2892-2 automatic movement. Most BR 01 watches make it very clear which movement is inside of them. The BR 01-94 for example has a 2894 automatic chronograph movement while the BR 01-97 has a 2897 automatic with power reserve movement, and so forth. A number of brands out there use basic ETA movements and try to disguise the caliber names with their own lexicon. Bell & Ross seems to have little interest in this practice and I applaud them for focusing on what counts. They are not a watch movement maker but a watch maker. They use reliable industry tested movements inside watches of their own design, and don’t mean to confuse anyone in the process.

I’ve said a lot of good things about the BR 01-92 Carbon watch and overall BR 01 collection because I have followed the evolution of this collection since its debut several years ago and have continued to really like it. When it comes to watches the true test of merit is time. That might sound painfully cliche, but only time separates good designs from trendy designs. Bell & Ross has proved to me that with the BR 01 Instrument it is hip to be square. Quality and execution are very good, and if you think like me you already know that you like the look of it. Price for this BR 01-92 carbon ref. BR 01-92-S-00009 is $4,200 retail.