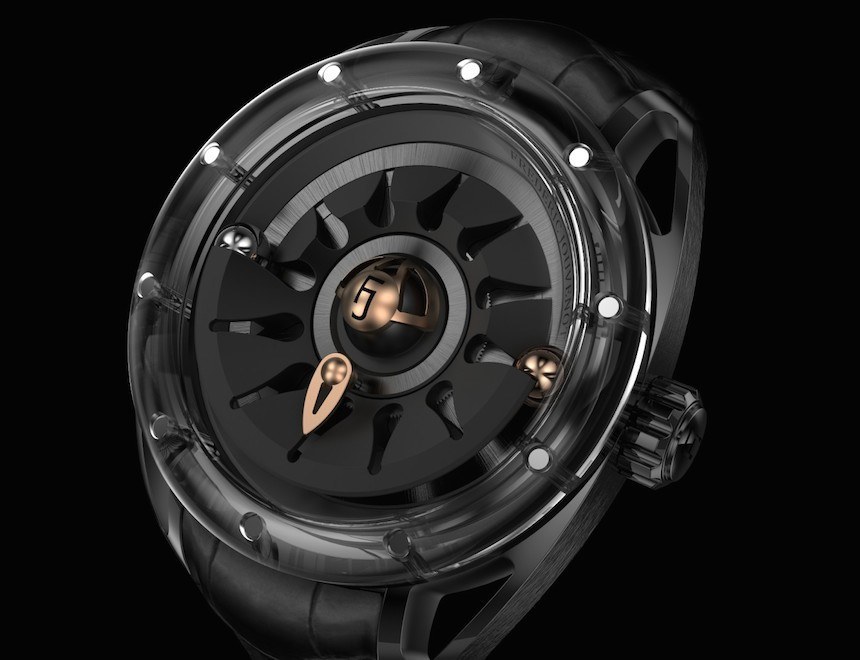 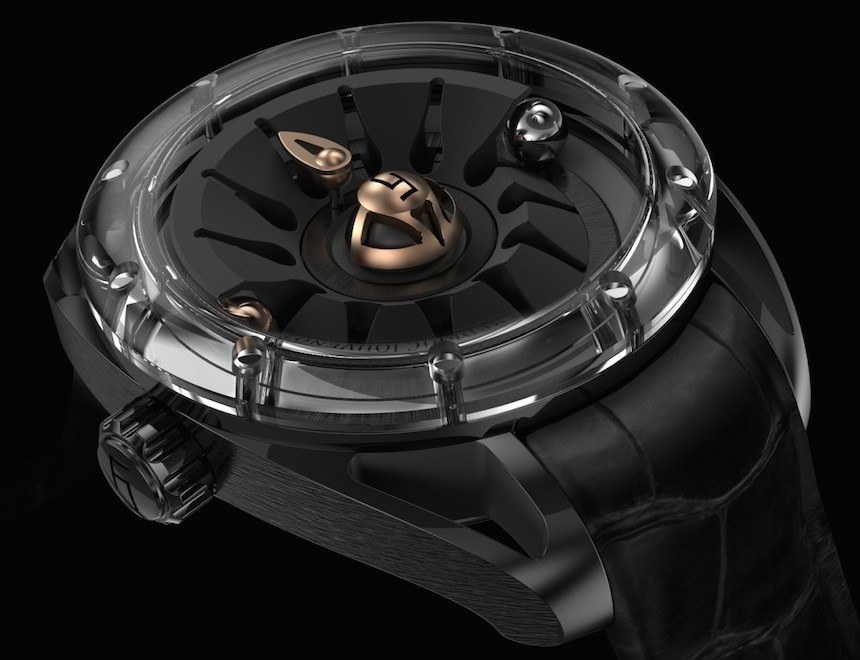 The Frédéric Jouvenot Sîn watch enters that extremely limited group of independent timepieces that try and find new ways to animate and display astronomical indications. To do that, it takes inspiration from none less than Sîn, the Mesopotamian god of the moon. Let’s take a look at some of the key details of this unusual piece, which will debut at Baselworld 2015.

The centerpiece of the Sîn, without a doubt, has to be its highly unusual sun-moon display. What we’re looking at here is effectively a 3D day/night indicator – to get a better idea on how it works,  check out the video above and see it in action. The passing time is recorded by centrally-mounted hands (the hour hand is referred to as “eccentric” as it appears to float above a silver colored ring surrounding the minute hand). The center has a small minute display while the hours are indicated at a somewhat larger scale with a dew drop shaped hand.

The dial also offers the day-night indication, meaning that the transit of the sun and moon are displayed by the three-dimensional models of the heavenly bodies as they “chase” each other around the top half of the dial. As day turns into night and vice versa, the sun or moon sets at the three o’clock position, disappearing into a cleverly constructed tunnel for twelve hours, before emerging on the other side at the nine o’clock position. It is bizarrely simple and yet quite beautiful. To make the most of this dynamic display, Frédéric Jouvenot has created a custom sapphire crystal that also replaces the bezel by being attached to the case by a series of pins. 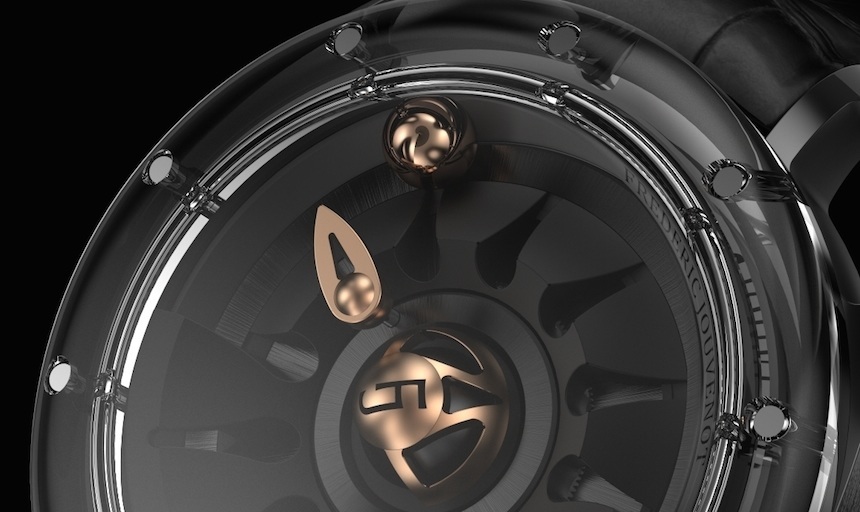 This watch will probably stick in the minds of those who rate the aesthetic above mechanical complexity. The movement, claimed to have been developed by Frédéric Jouvenot, is hand-finished and should be displayed behind a glass case back – although, as is sometimes the case with these early news, no case-back shots are available at the moment. The movement, which packs a rather average 50 hours of power reserve should be a relatively simple piece of engineering that performs its duty without fuss and the odd flourish in terms of layout (a central pawl spring makes for a nice image).

One of the many interesting consequences of the incredibly strong growth experienced in the watch industry over last couple of years is the sheer number of new-comer brands who have entered the market recently. These new brands – most of them, at least – have to present something bold and new to be recognized by the watch community. When it comes to differentiating features, for me, the first point of call should always be the case silhouette. After all, if you look at all the iconic watches released over the past century, those with the most staying power could be instantly identified from their outline. Having success in this field could determine the long-term success of the brand. In that respect, how does the brand new Frédéric Jouvenot Sîn fare?

Well, more established brands are sometimes cocksure of their ability to roll with the punches. They are able to lean on their heritage or argue that their latest effort is justified by some obscure reference to their brand’s ideologies. Small, independent firms founded in the last decade do not have that kind of luxury. Reputation is earned by the excellent execution of achievable goals, and everything counts. 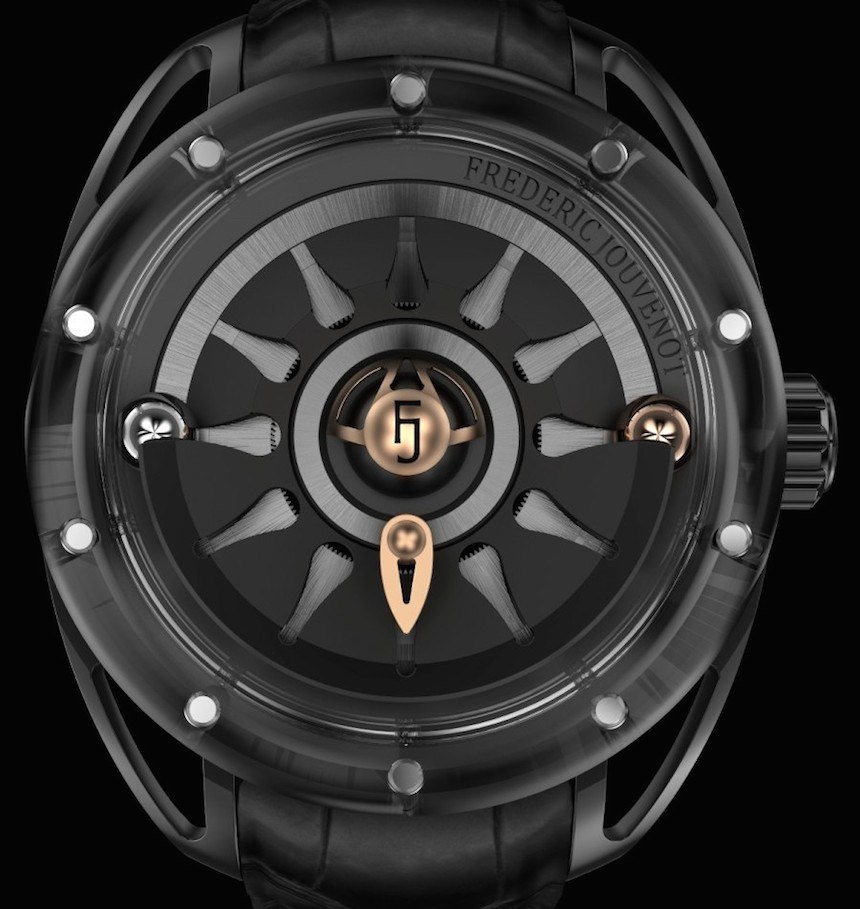 Frédéric Jouvenot has, as I see it, in many ways succeeded with his new watch. The Frédéric Jouvenot Sîn watch pays homage to the Mesopotamian god of the Moon, and draws its inspiration from the celestial dance performed by the sun and moon on a daily basis. It doesn’t do anything particularly revolutionary, but it does do it in a rather beautiful way.

I applaud the Frédéric Jouvenot Sîn for the way its design mixes this scarcely encountered day-night indication with a modern, technical looking case. The case is ergonomically designed, DLC-coated and water resistant to 50m. But there is one point that sits a little uncomfortably with me, and that is its silhouette.

Let me be clear: I love it. But I love it because it reminds me of one of my grail watches, the De Bethune DB28 Skybridge (hands-on here), which also features a similar, tonneau shaped case with sloping, skeletonized lugs. But is it acceptable for two brands to peddle such similar designs? In fairness, the hands of watch designers are tied to a great extent (the case and lugs have to fit within certain boundaries in order to retain functionality), and it is worth remembering that although these brands look very similar from directly above, one need only turn them to one side to see the marked differences. The De Bethune watches appear to be more elegantly built, with the articulated lugs performing a separate and rare function; Frédéric Jouvenot, who has utilized the same case before, sticks with a far more robust build. On a most personal note, in my quest to design what I would consider to be the perfect watch, I conceived a case that was borderline identical to the Frédéric Jouvenot Sîn, before discarding it on the grounds it was too similar to De Bethune. Now, I believe I made a mistake. The Frédéric Jouvenot Sîn is sufficiently different and engaging without the comparison to De Bethune. They probably appear more similar in press photos than they do in person, not to mention on the wrist.