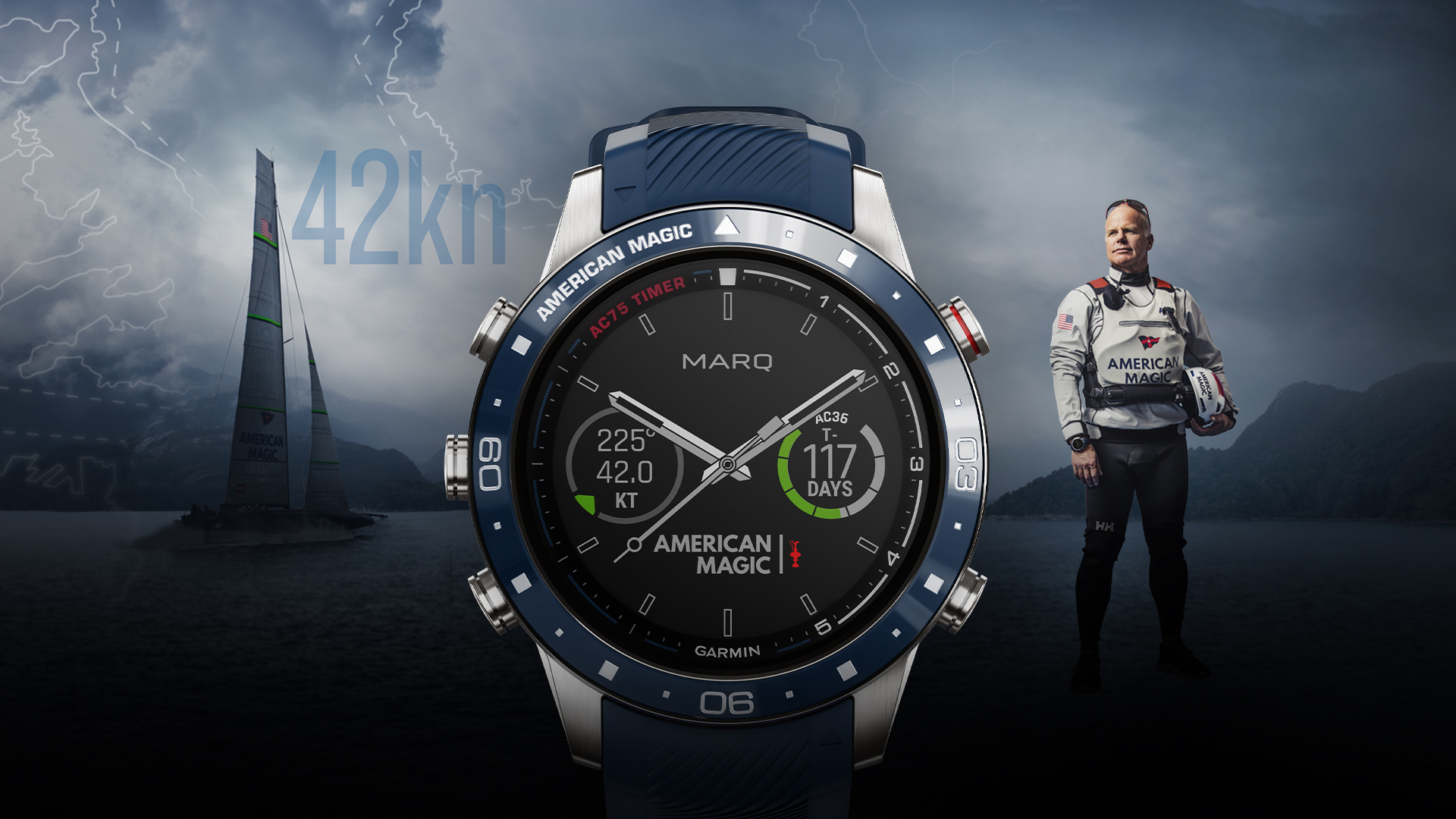 The Garmin MARQ series, first introduced in 2019, has become a flagship line of smartwatches for the brand, combining the pinnacle of its smartwatch technology with more traditional watchmaking materials and a serious enthusiast focus. The MARQ series has ranged from pilot-focused models to racing watches, but one of the most technically impressive of the series is the MARQ Captain sailing smartwatch. For 2020, Garmin has partnered with the American Magic yacht racing team, which will compete for the 36th America’s Cup sailing title this year. To commemorate this partnership, the brand has announced the Garmin MARQ Captain: American Magic Edition, adding a host of yachting design cues and exclusive functionality to the hyper-capable MARQ Captain platform. 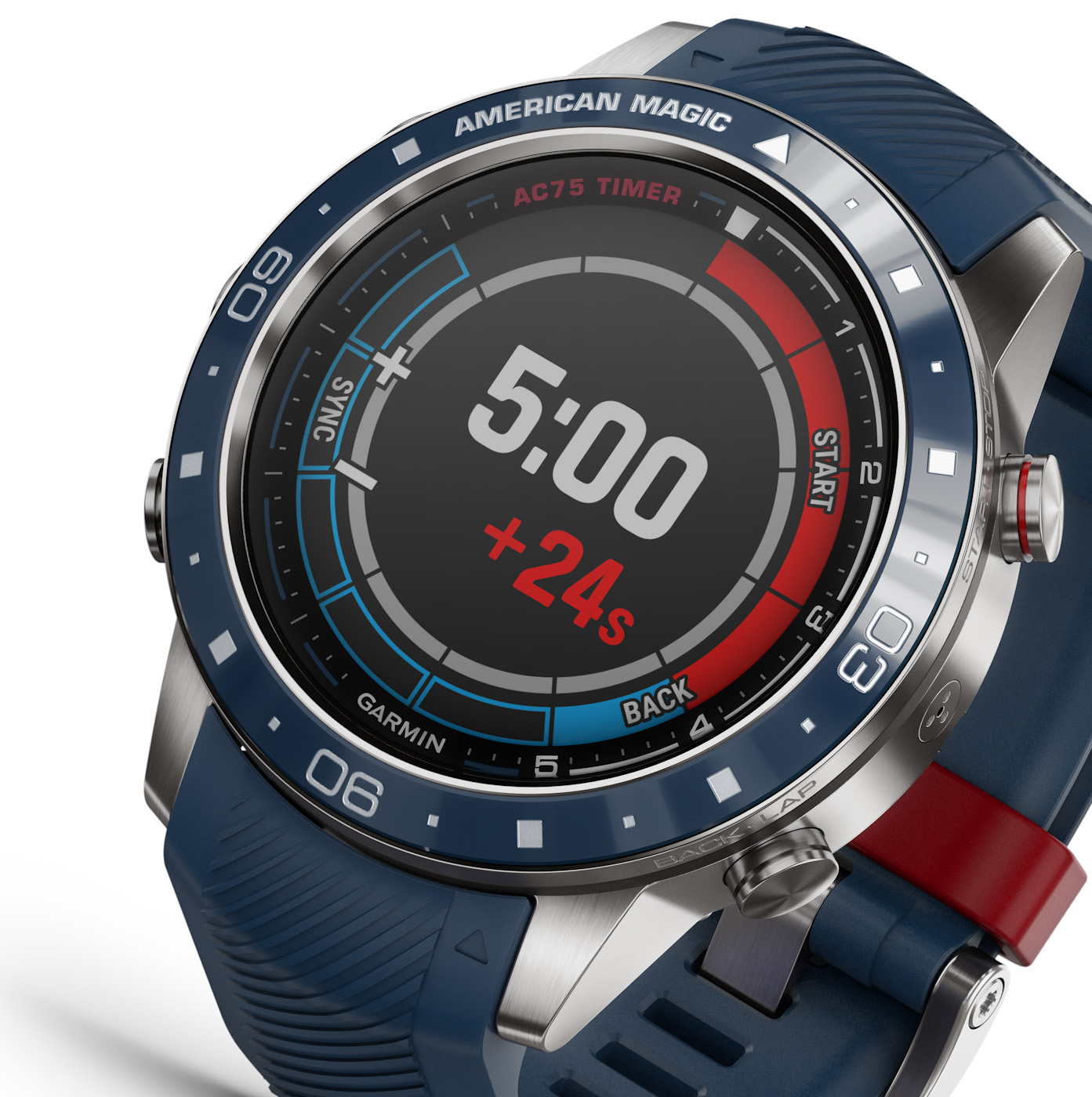 The case of the Garmin MARQ Captain: American Magic Edition makes a few key changes to the base model MARQ Captain. The overall 46mm brushed stainless steel shape remains, with its classic sports watch lines, but the rest of the design takes a sizable departure. All five pushers have been reshaped and are now wider, featuring a character line near the top. While the original MARQ Captain featured a navy blue ceramic bezel insert, the American Magic Edition updates this with a slightly lighter shade, along with a completely new mix of indices and Arabic hours numerals accented with “American Magic” text between 10 o’clock and 12 o’clock. The claimed 100-meter water resistance rating should be sufficient for this watch to survive any yachting excursion, provided the wearer doesn’t fall overboard. 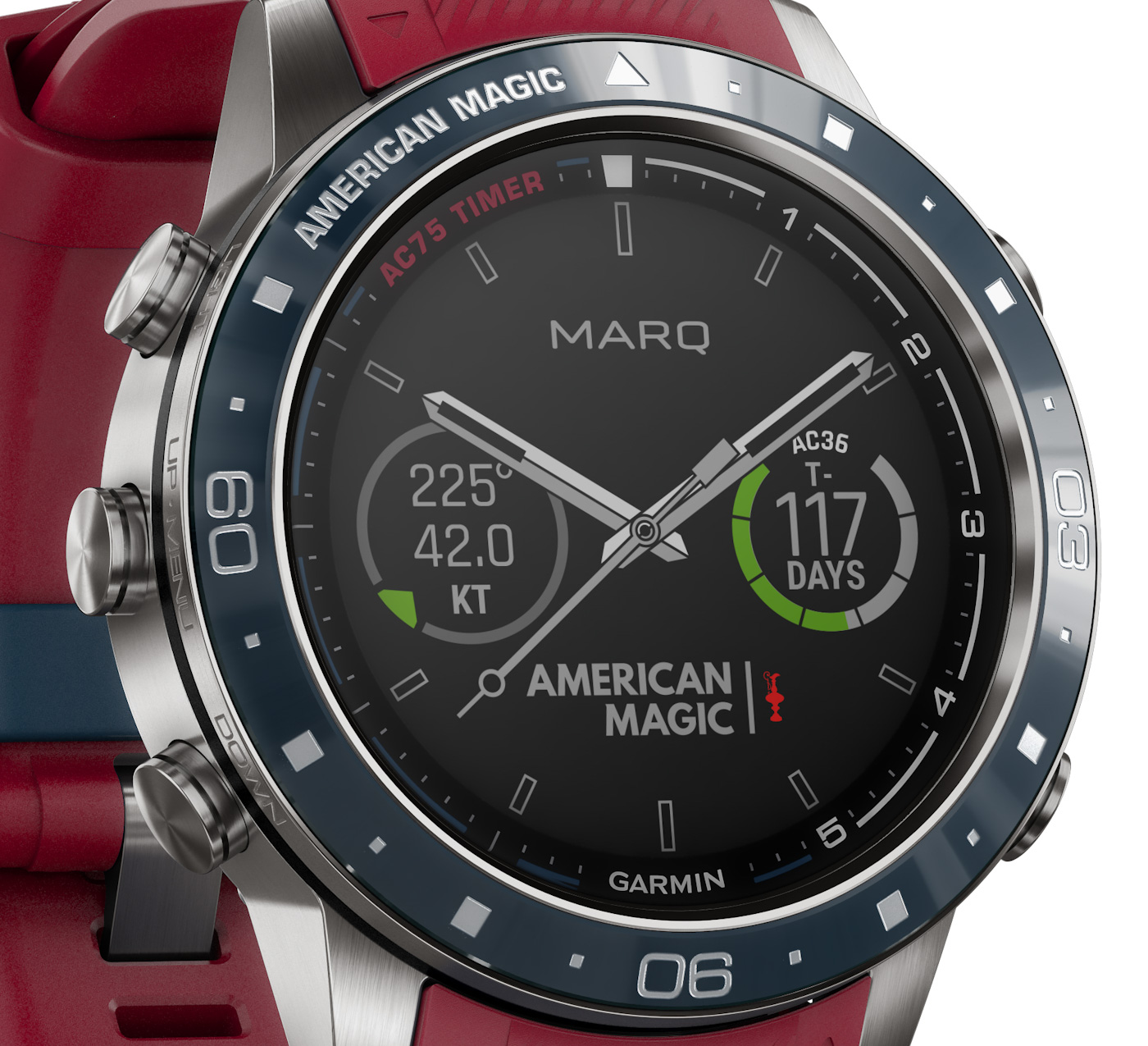 Like the case, the dial display of the MARQ Captain: American Magic Edition makes some substantial changes to the base model. Two unique sailing-focused watch faces are included here. The first analog-style face offers a pair of subdials, with a compass at 9 o’clock and a countdown timer to the America’s Cup race in Auckland at 3 o’clock, along with an oversized American Magic emblem at 6 o’clock. The second face is digital and includes a silhouette of the American Magic team’s new yacht DEFIANT as a backdrop (images of this particular dial display were not made available at press time.) All other standard faces for the MARQ Captain are also included here. 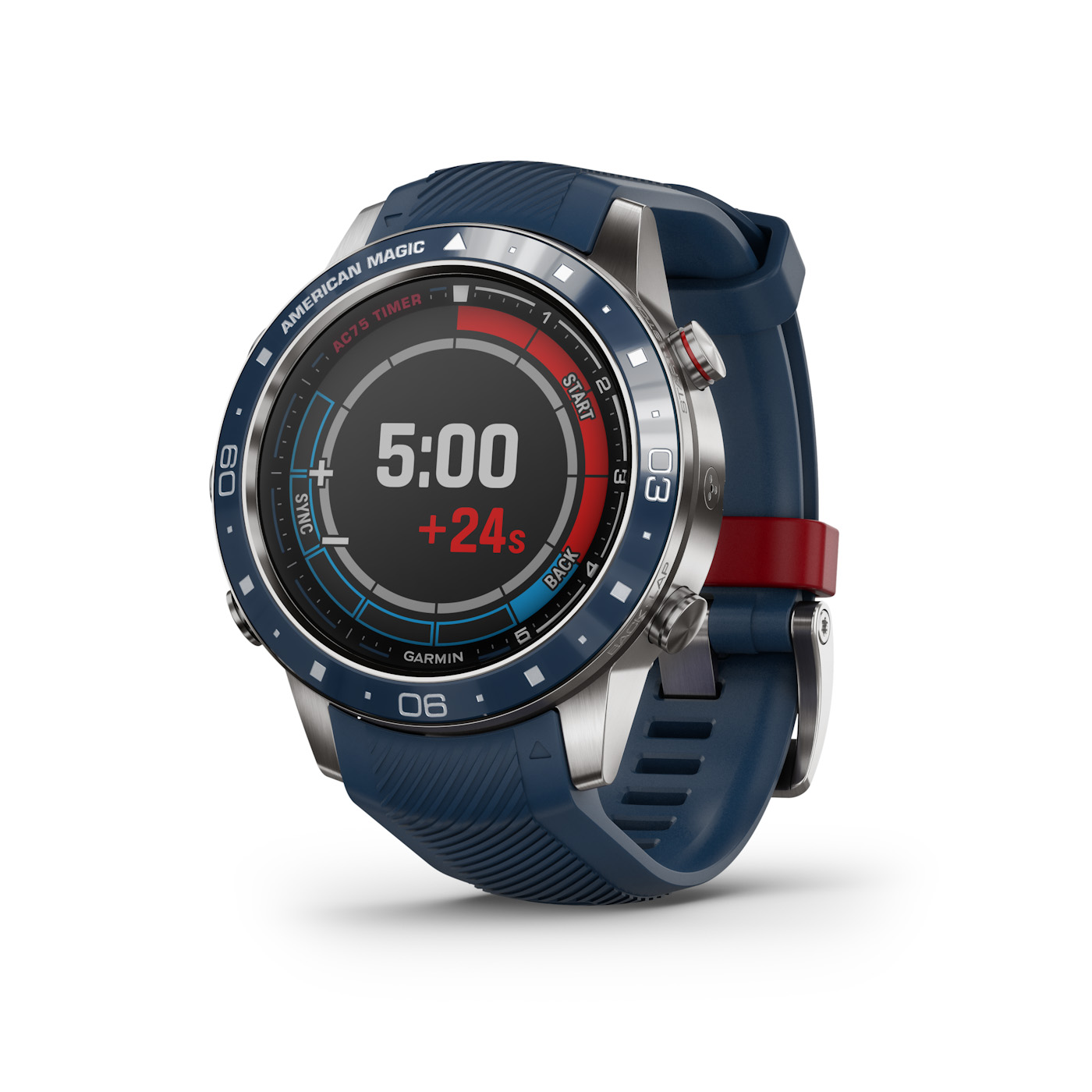 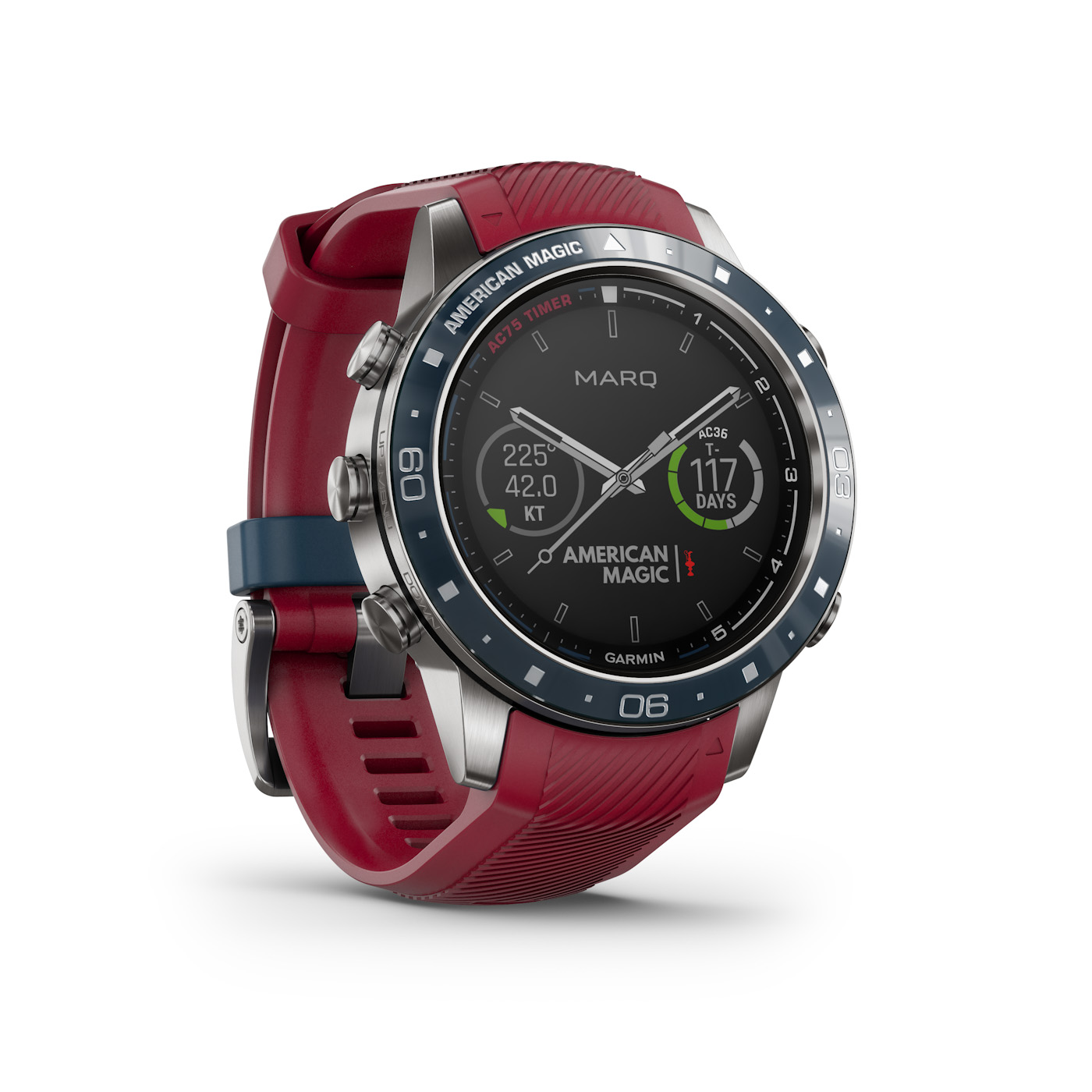 Garmin mounts the MARQ Captain: American Magic Edition on a choice of two engraved silicone straps with a diagonal striped pattern. The first is a deep navy blue with a contrasting dark red keeper, while the second is a reverse, featuring a navy keeper on a dark red strap. This hard-wearing, comfortable, and modernist strap design suits the overall ethos well, feeling both futuristic and traditional.

With the MARQ Captain: American Magic Edition, Garmin gives its MARQ series a hefty dose of credibility through the association of one of America’s top sailing teams. The Garmin MARQ Captain: American Magic Edition will be available in May 2020 through authorized dealers at an MSRP of $1,750. For more information, please visit the brand’s website.