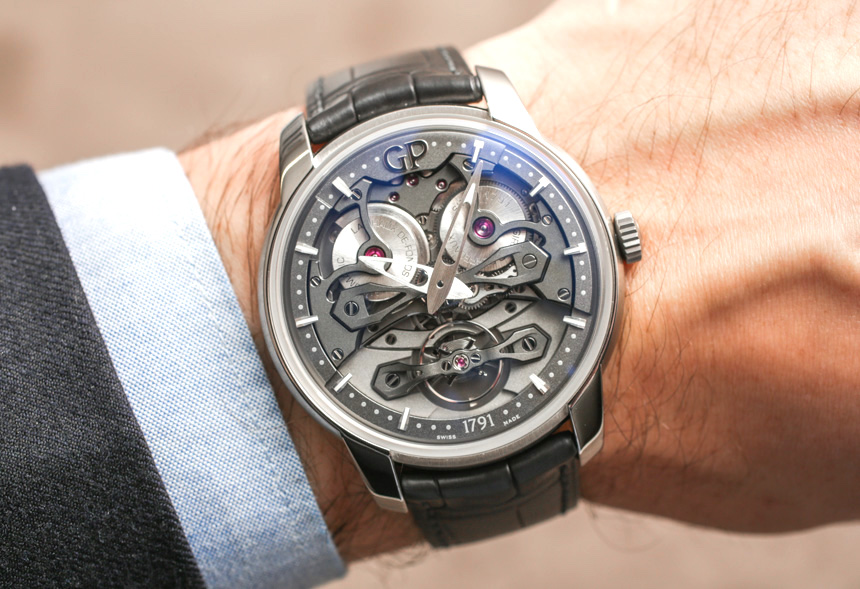 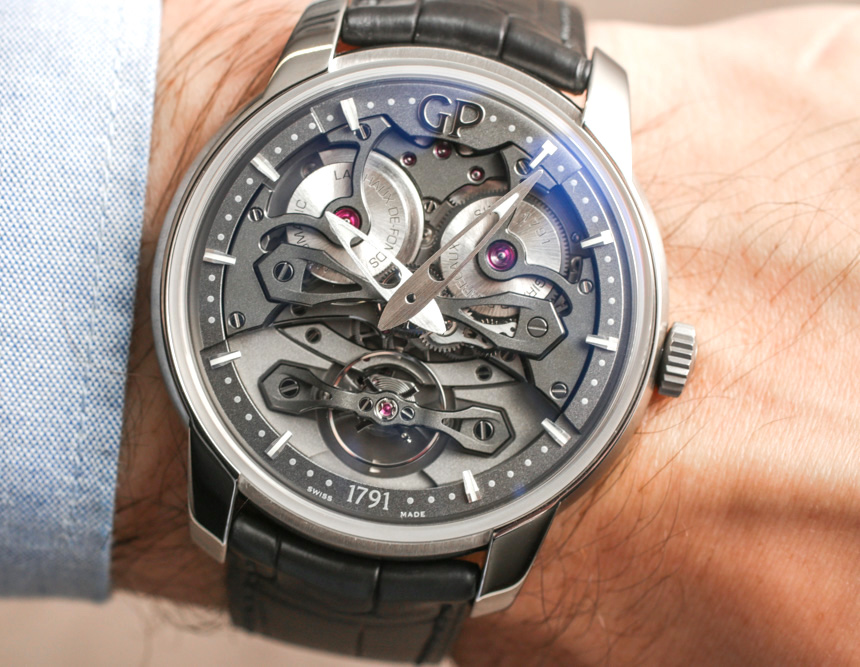 At SIHH 2017, I enjoyed seeing the interesting new Girard-Perregaux Neo Bridges Automatic Titanium watch – that takes an aesthetic concept the brand began a few years ago and makes it just that much more accessibly priced (but still pretty high-end). Luxury watch brands have been pushing to release more models with appealing and distinctive “high-tech” designs that don’t cost over $50,000 (or $100,000). Again, that doesn’t make them what you might consider affordable, but compare the $150,000-plus Girard-Perregaux Neo Tourbillon from 2014 (hands-on here) with this 2017 Neo Bridges that comes in just under $25,000. Two peas from arguably the same pod, but one is just a lot more practical. 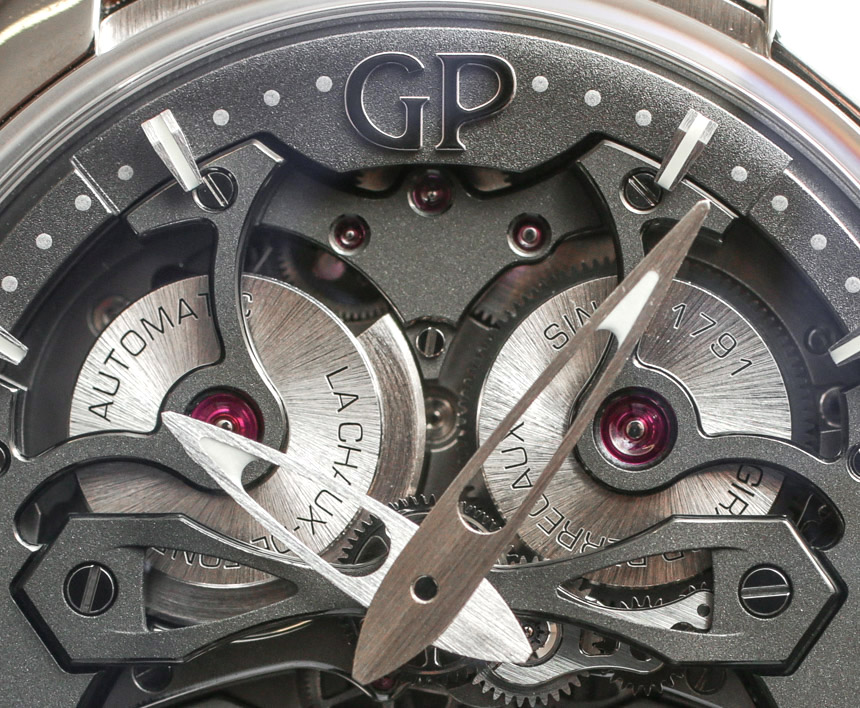 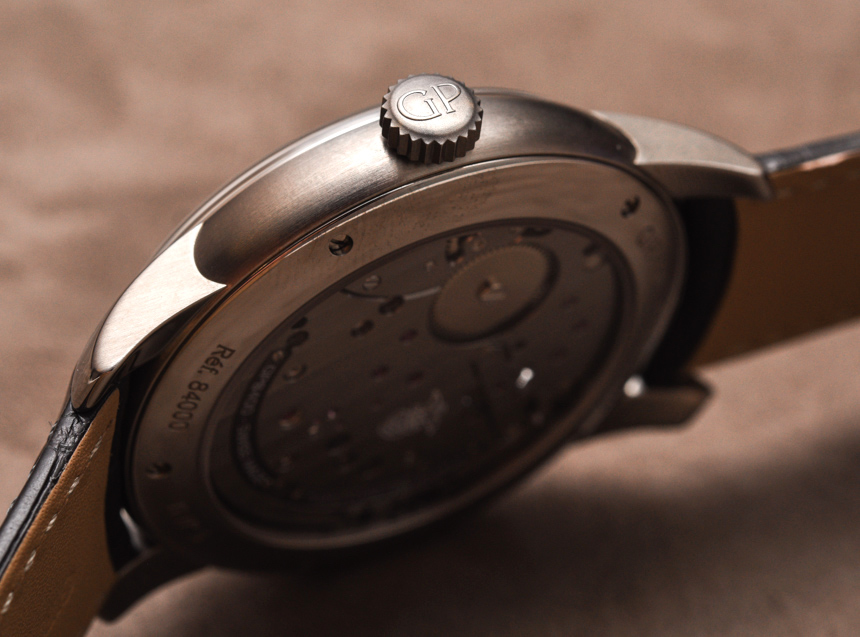 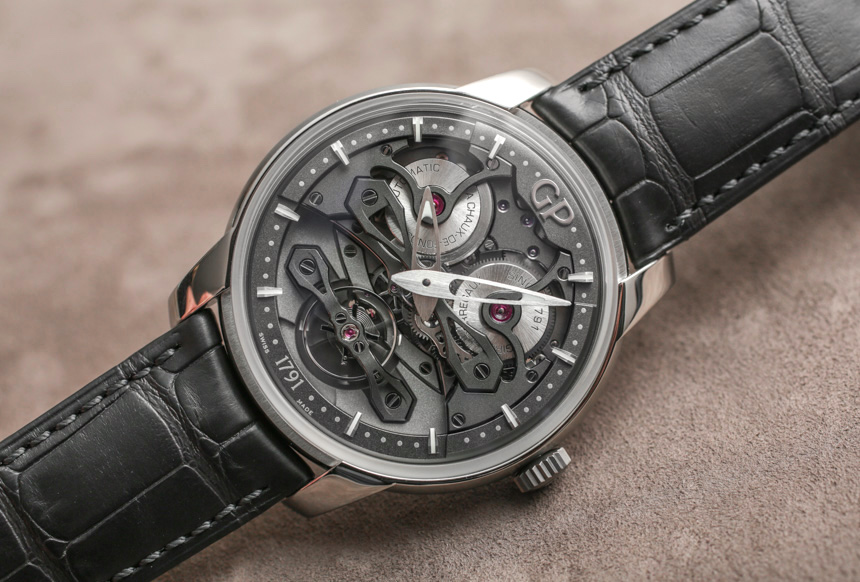 When Girard-Perregaux released the Neo Tourbillon, the idea was to create a more contemporary take on the brand’s iconic Three Bridges Tourbillon which has been a mainstay of its modern upper-high-end collection. The impetus was a lovely pocket watch the brand debuted at a fair in Paris in the late 19th century. 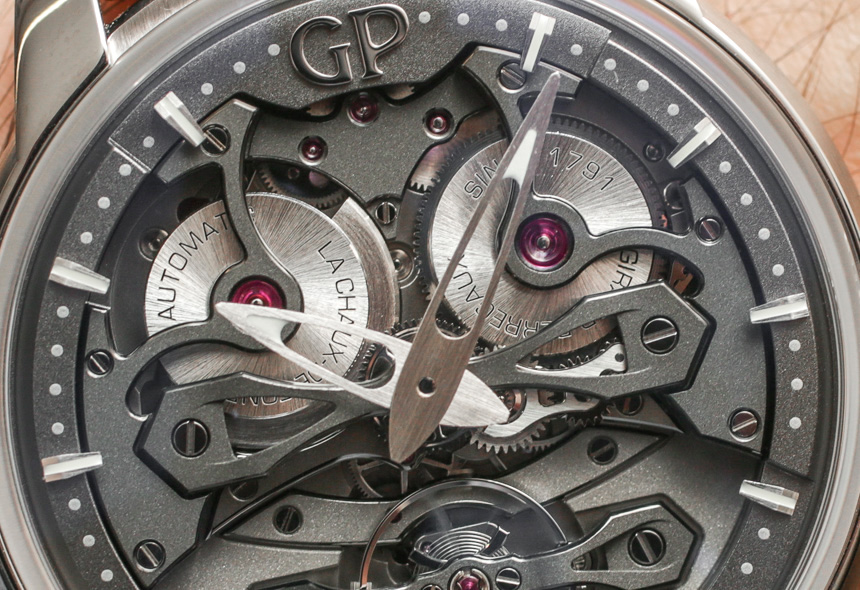 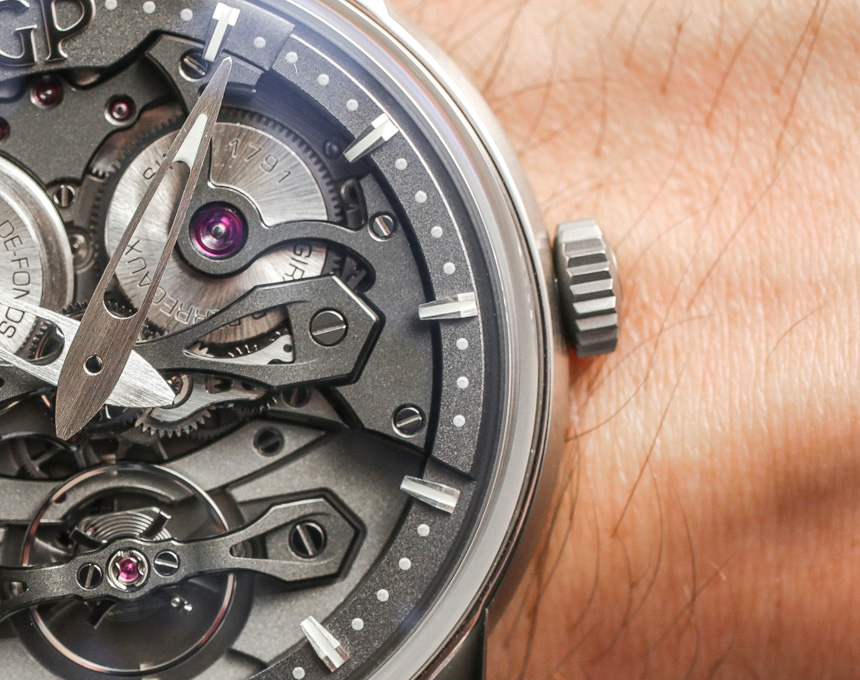 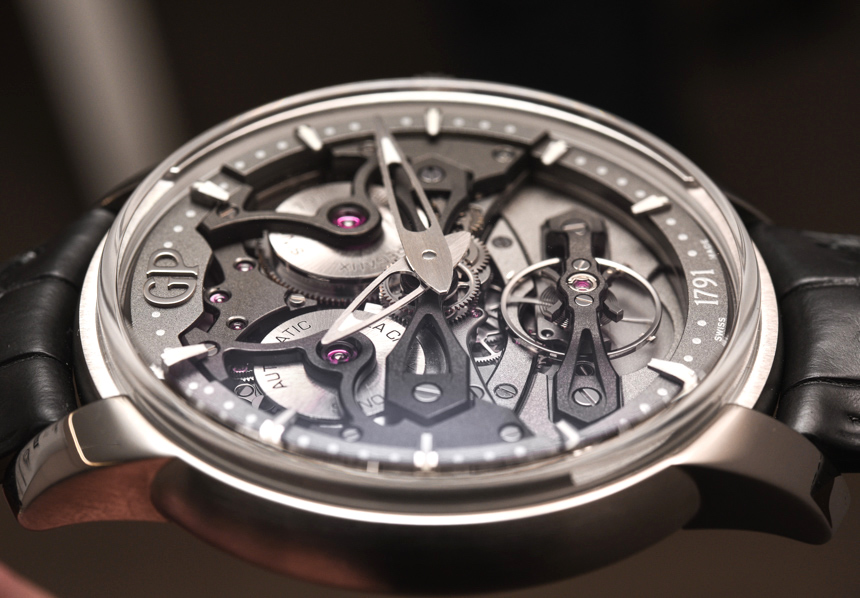 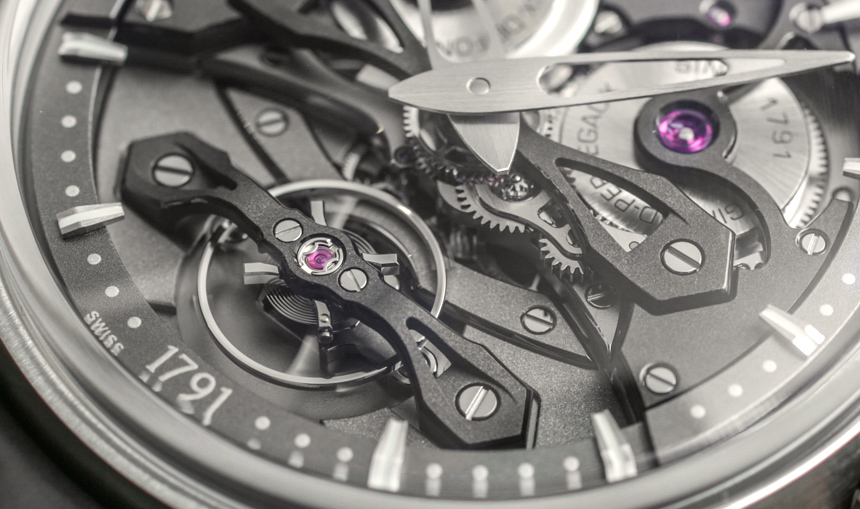 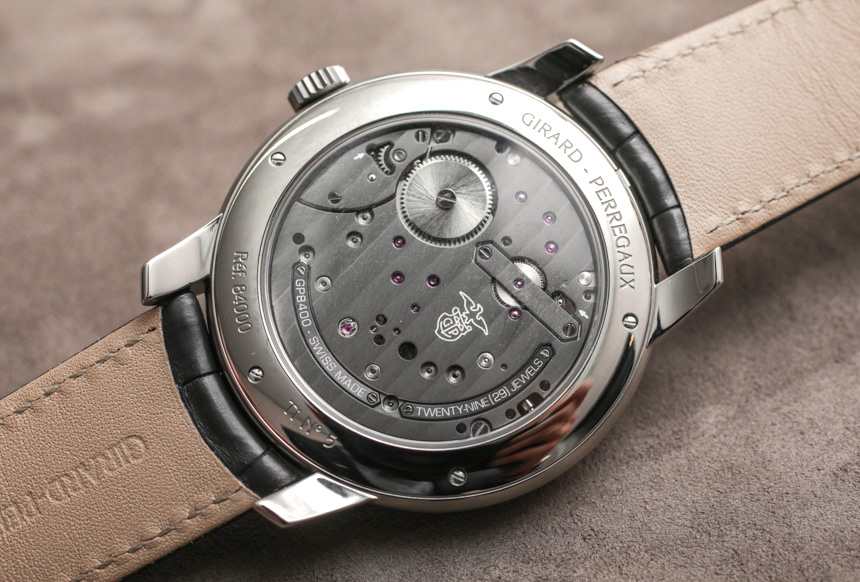 What’s new for 2017 is the removal of the tourbillon – making the overall watch a lot more affordable. What you get now is a more practical movement, but one that in many ways retains the visual pop that collectors came to enjoy in the Three Bridges and now the Girard-Perregaux Neo Bridges collection. In truth, this is very much a “lifestyle watch.” It attempts to capture the lifestyle of loving mechanical watches, with being firmly committed to enjoying contemporary design, and also liking to show both of those things off. There is no particular technical feature or material that Girard-Perregaux is trying to show off here. This is just a “cool” watch that looks “neat” and represents a nice alternative from the norm. If anything, Girard-Perregaux is seeking those who want to wear something “different” yet high-end, and have the means to afford it. 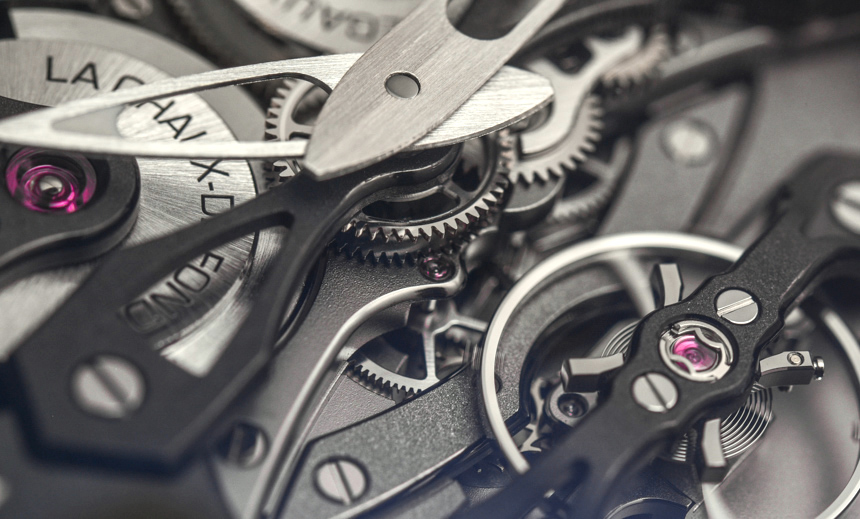 If the 2017 reference 84000-21-001-BB6A Girard-Perregaux Neo Bridges Automatic Titanium watch is successful, then you can be sure Girard-Perregaux will release more styles. With the debut model, they go a bit trendy with an all-dark and gray model in a brushed titanium case with a mostly matte and brushed surface dial. Gray certainly goes with everything, and here Girard-Perregaux is sticking with more subtle finishing in the hopes that onlookers will give the dial close attention. 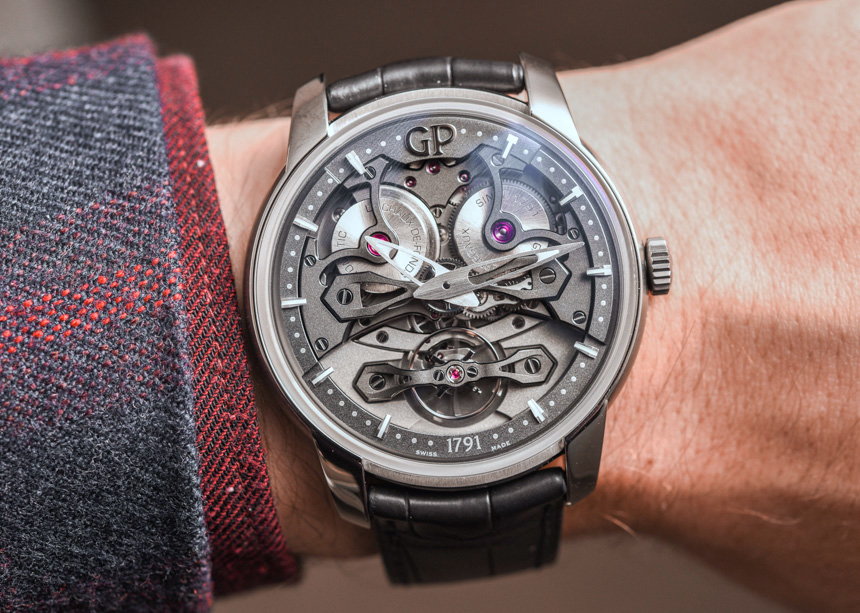 There are times that people complain that they see a face on a watch dial. I reject this as an objection because the most recognizable things on the planet are faces, and it’s just how our minds work (the word for the psychological phenomenon being Pareidolia). If you want to give a mechanical watch more character then it can make a lot of sense to put eyes and a mouth on the dial. Girard-Perregaux seemingly intentionally designed the Girard-Perregaux Neo Bridges with a mainspring barrel and automatic rotor that look like eyes, bridges that look like cheeks, a regulation system that looks like a mouth, and even a sort of mustache. The dial is really quite expressive if you imagine it as being the visage of some sort of mechanical man (which it kind of is). The hands aren’t the paragon of legibility, but they are prominent enough and not too difficult to spot when looking to read the time – and the dial (thankfully) has hour and minute markers to improve its function as an actual timepiece. 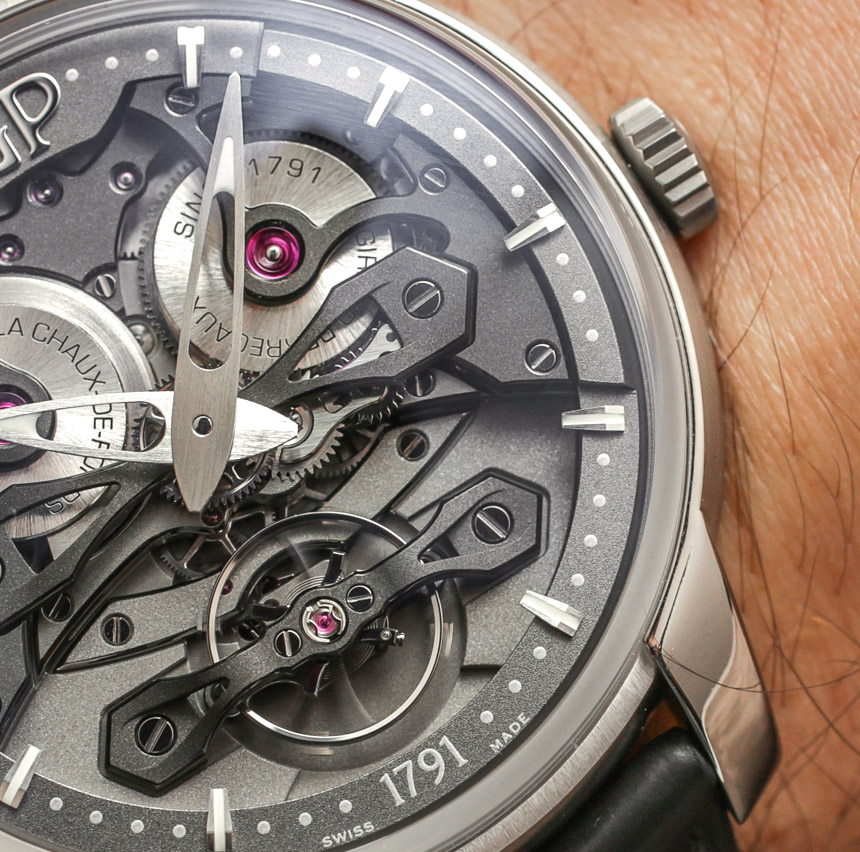 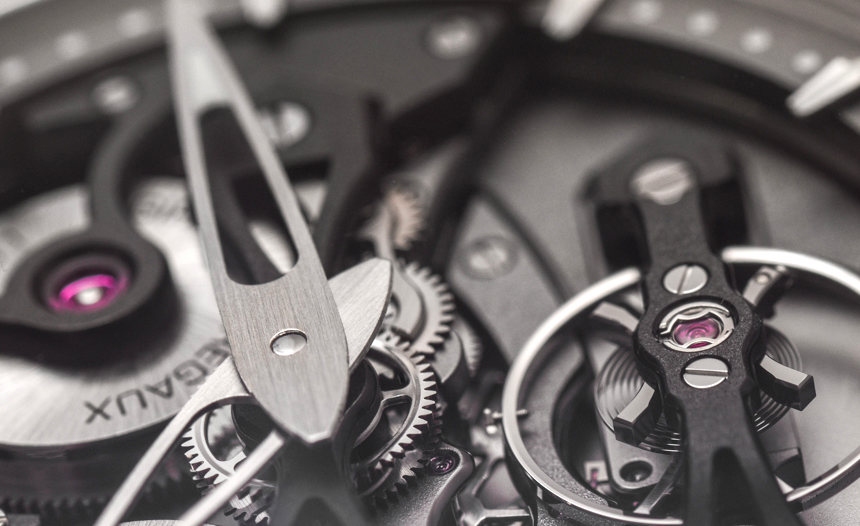 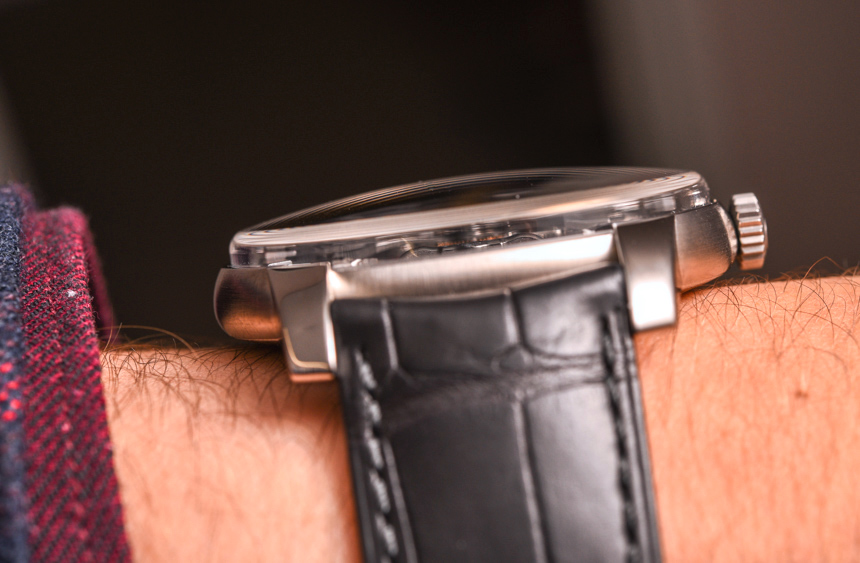 Given that this is a watch meant to be shown off, the case is 45mm wide but not too thick at 12.18mm. The industrial finishing on the case helps make it look a bit more modern, and the rounded shape is where the more classic part comes in. It’s comfy on the wrist and doesn’t necessarily wear all that large given the design of the lugs. Over the dial is a typically well-done AR-coated sapphire crystal and the case is water-resistant to 30 meters. Attached to the case is a matte-finished dark gray alligator strap with a matching titanium buckle. 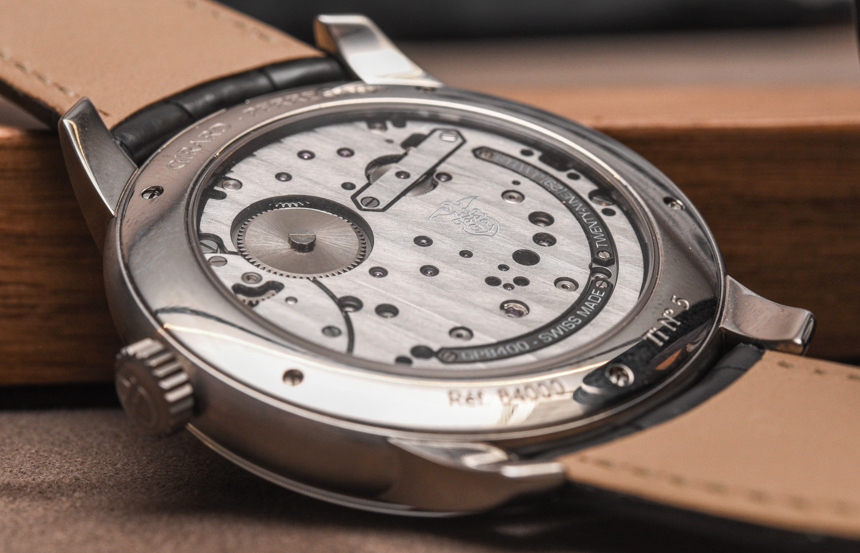 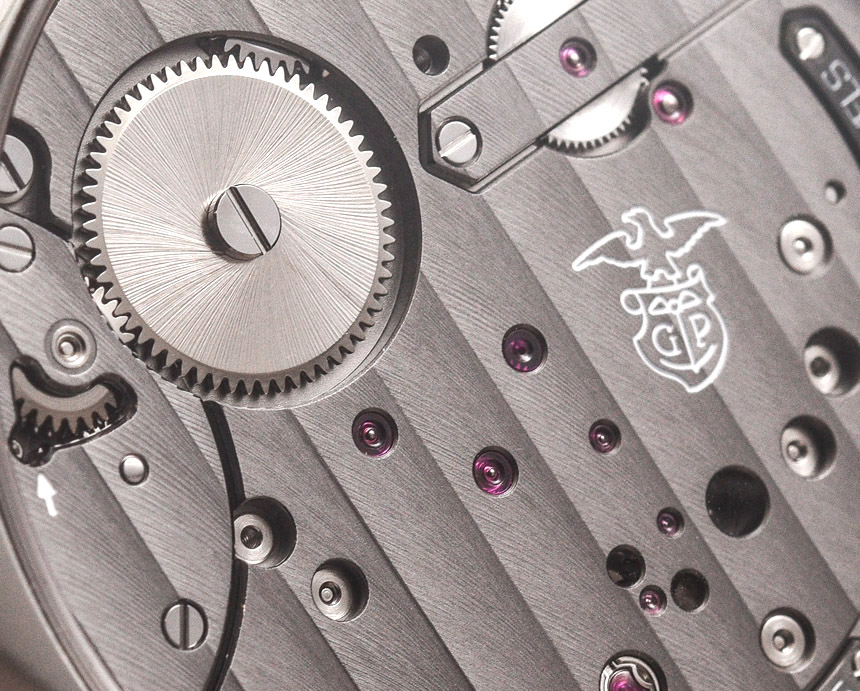 Inside the Girard-Perregaux Neo Bridges watch is the Girard-Perregaux in-house-made caliber GP08400 (GP08400-0001) automatic movement. It’s meant to be shown off, though it doesn’t have any particular standout technical feature. The movement uses a micro-rotor, the position of which is perhaps the most interesting technical part of the movement. The movement appears to have two mainspring barrels (overall power reserve is 50 hours) but it actually has one mainspring barrel with the micro-rotor adjacent to it on the dial side. Looking at the rear of the watch, you could easily mistake it as being manually wound and not an automatic. The visible balance wheel operates with a frequency of 3Hz (21,600bph) – which makes it nicer to watch. Since 4Hz movements have a higher frequency it is not as easy to watch them move. 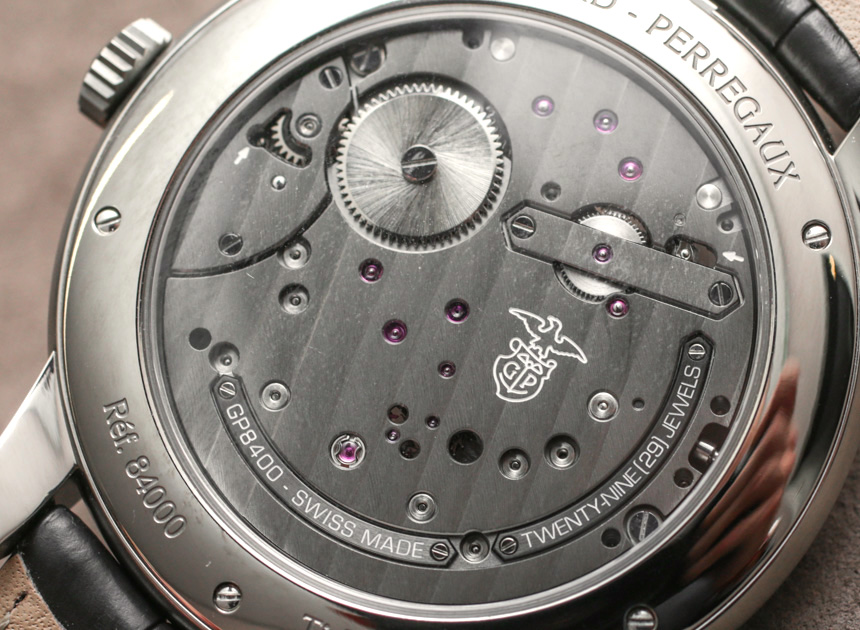 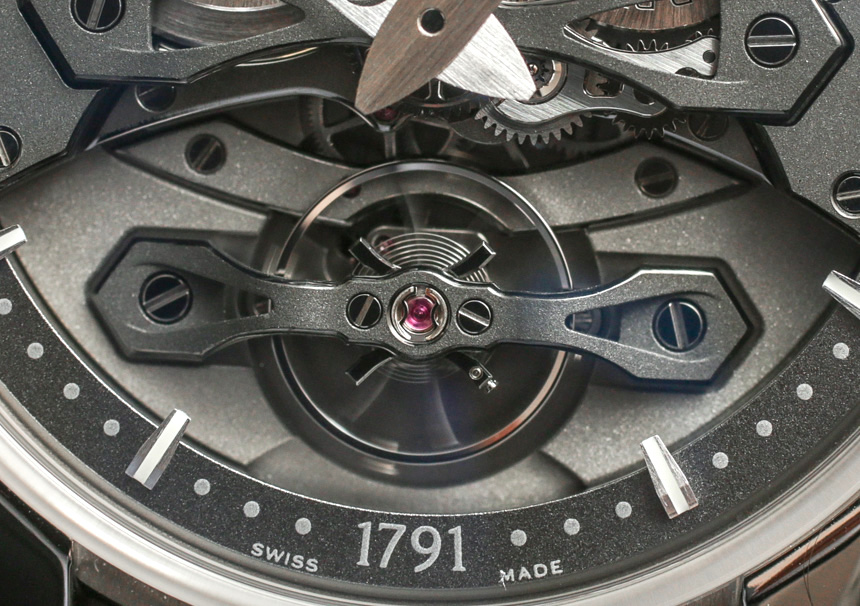 The 208-piece movement is attractive with its carefully architected look. PVD and NAC coatings make for the various color finishings, and overall it’s a neat movement to look at under the hour and minute hands. The balance wheel is held with a signature Girard-Perregaux “arrow bridge” done in black. The balance wheel is relatively large (for visibility purposes) being a bit over 10mm wide. Turning the watch over, at 6 o’clock on the dial is printed “1791” which Girard-Perregaux says is the year the brand got started… though I don’t think they were making anything like this back then. 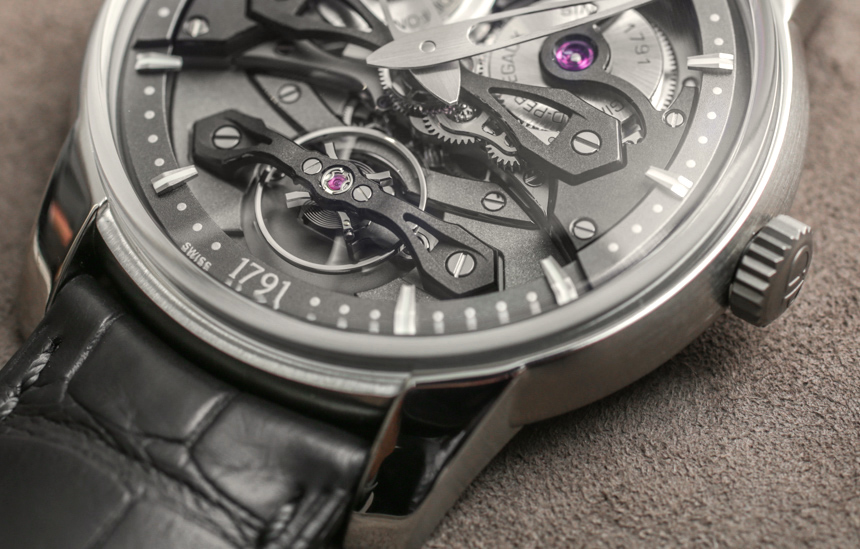 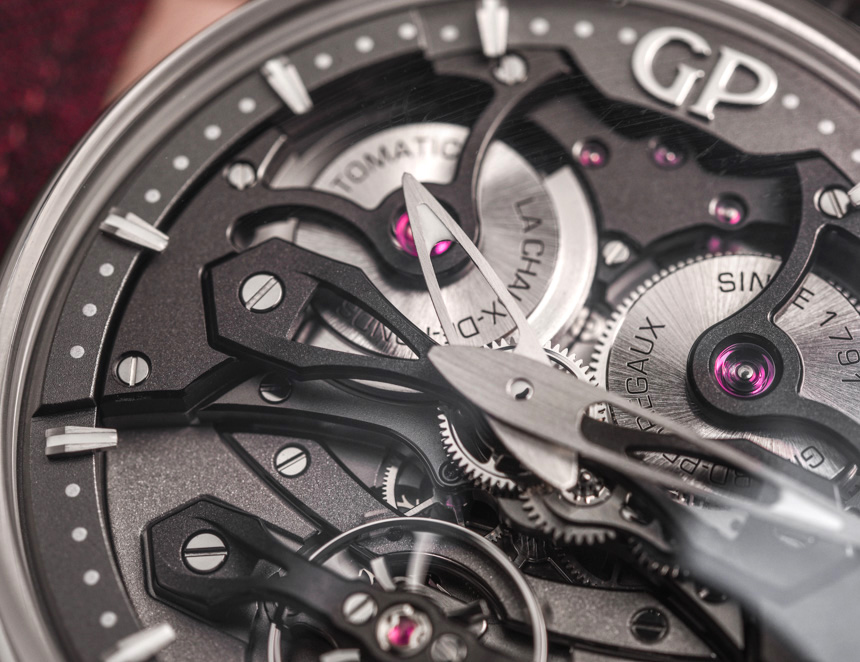 Fun to look at and ideally fun to wear, the Girard-Perregaux Neo Bridges Automatic Titanium reference 84000-21-001-BB6A is a decently cool watch with a lot of personality produced with high-quality typical of the Swiss Girard-Perregaux brand. Their job will be to imbue the watch with enough personality and marketing that the right people will find out about it – and not just us hardcore watch nerd media members who make it to tradeshows like SIHH and traditional watch stores. Price for the Girard-Perregaux Neo Bridges is $24,000. girard-perregaux.com