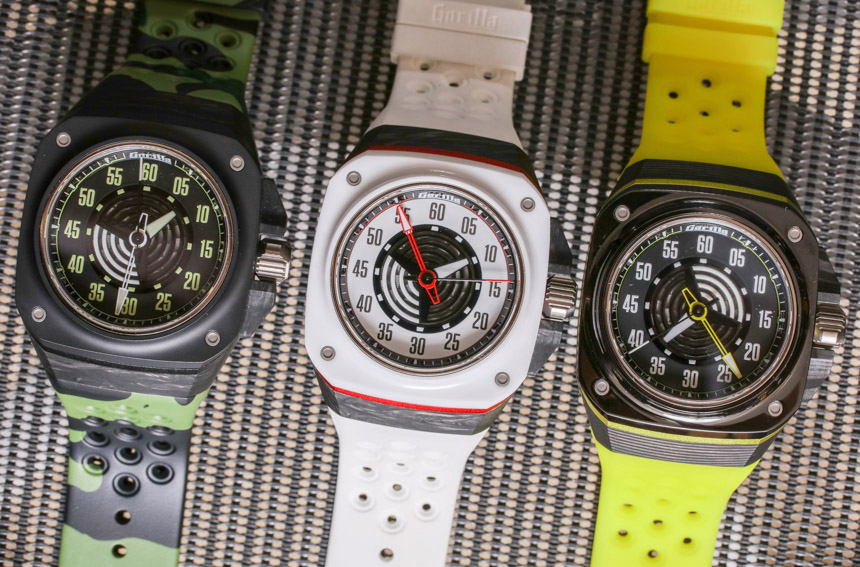 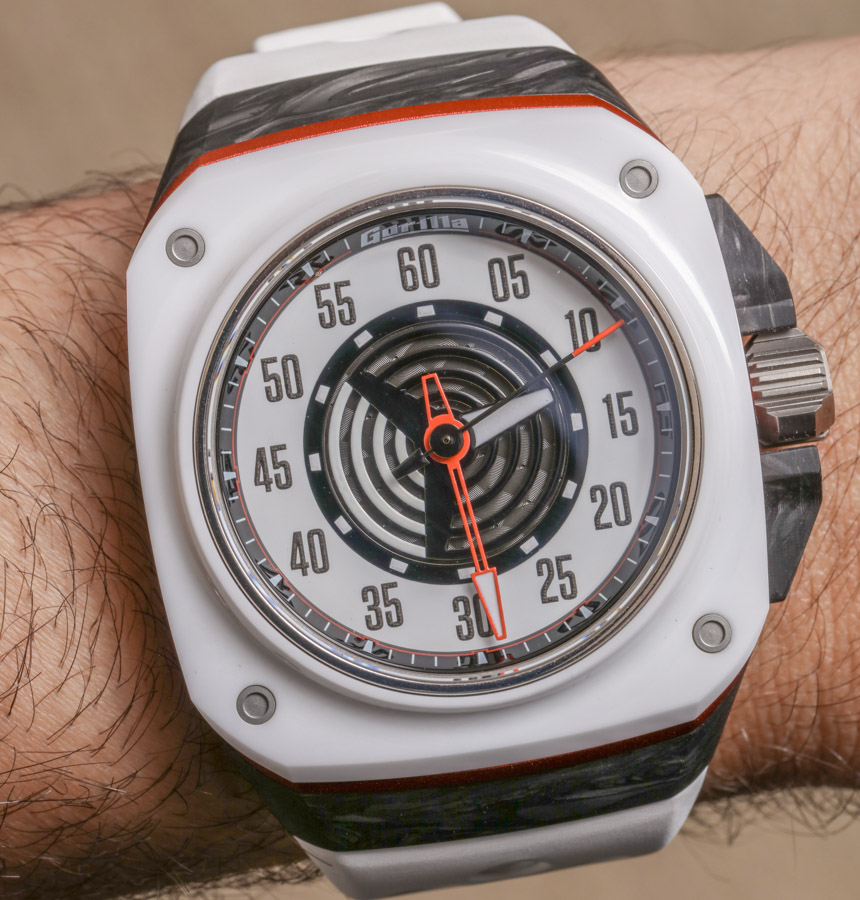 Newer Swiss watch brand Gorilla – from the design mind of Octavio Garcia – has released three new colorways of its Gorilla Fastback watch today. Originally debuted last year on aBlogtoWatch here, the Gorilla Fastback is the first watch released by Mr. Garcia since he left his decade plus position leading design at Audemars Piguet. 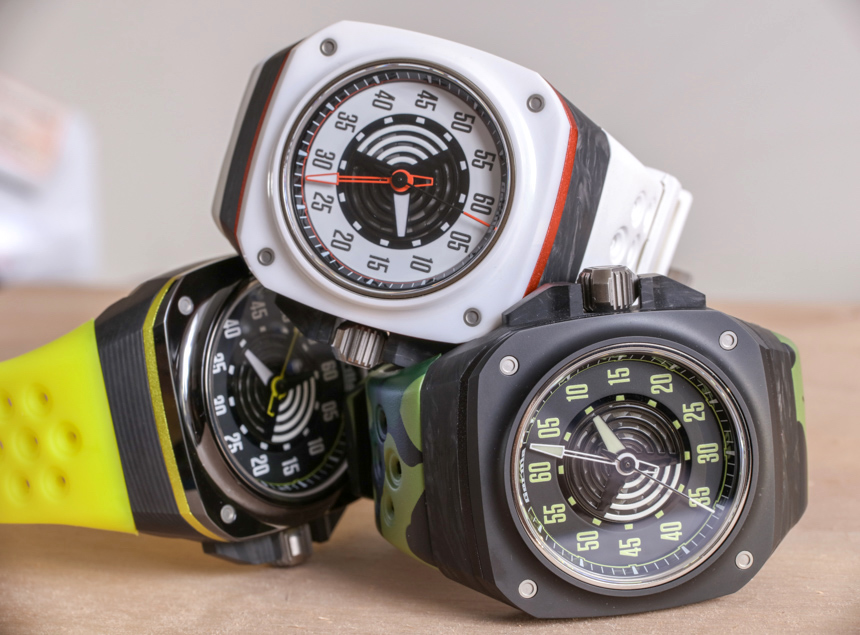 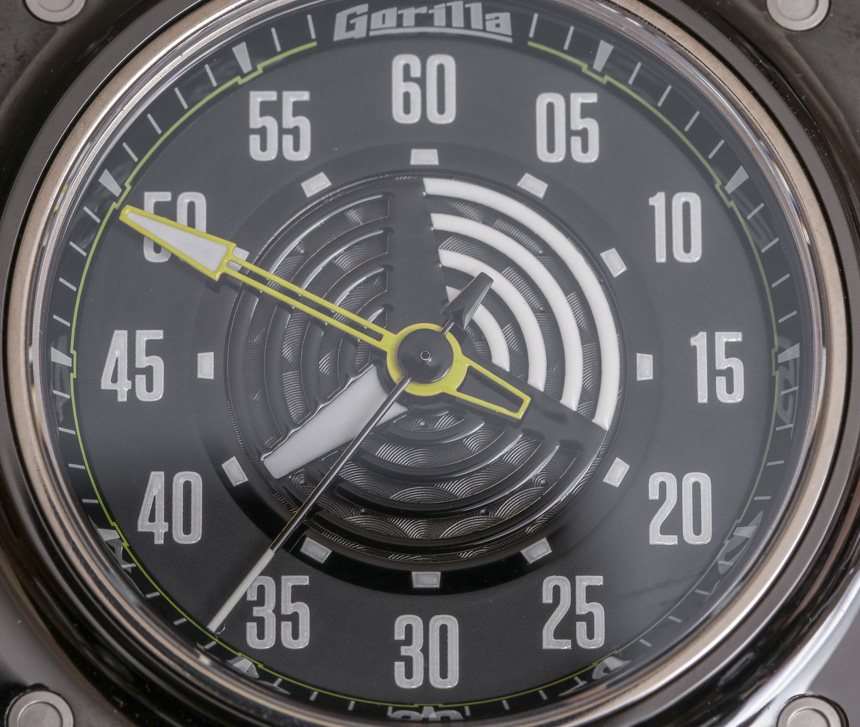 The Gorilla Fastback is no Royal Oak, but in its own way it serves the same emotional purpose that a Royal Oak Offshore does. Gorilla just does that for someone younger or merely on a “real person’s budget.” Macho in style and large in size, the Gorilla Fastback is inspired by American muscle cars from the 1970s and probably fits in with the theme of many of the modern American muscle cars that are a direct revival of those classic vehicles. 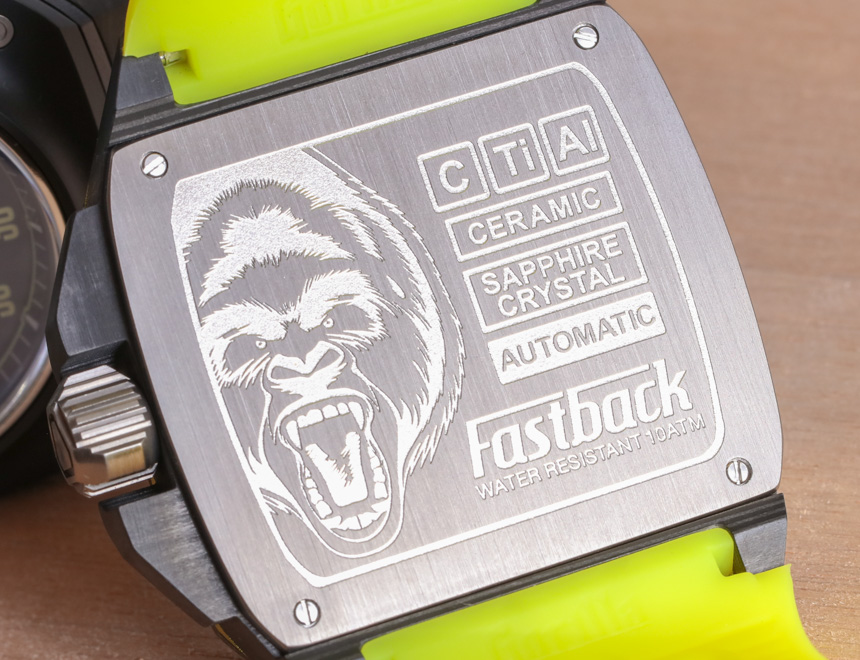 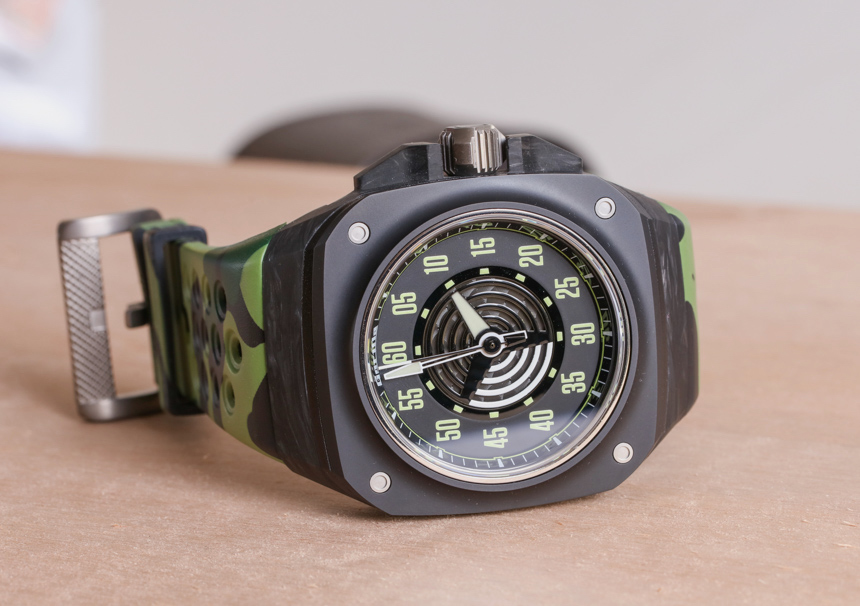 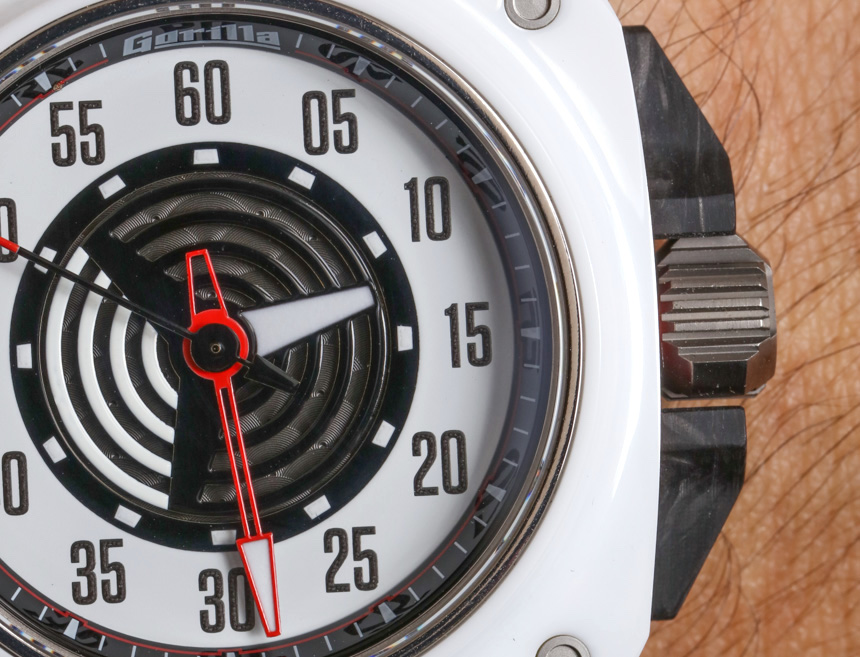 Garcia doesn’t claim that the Fastback is the sports lifestyle watch for everyone, and seems less than perturbed at the polarizing reaction that one can expect from any design that is actually original. Garcia did however deliver where it counts, and that is in regard to the price. At $880 USD, the Fastback isn’t priced for the mainstream, but rather authentic watch lovers who can save up for something nice, but aren’t going to afford or justify spending thousands of dollars on a luxury item. Pricing the Fastback at around the cost of a decent new smartphone was a good idea, and does something many larger watch makers regularly talk about doing but haven’t seem to have gotten around to just yet… appealing to millennials. 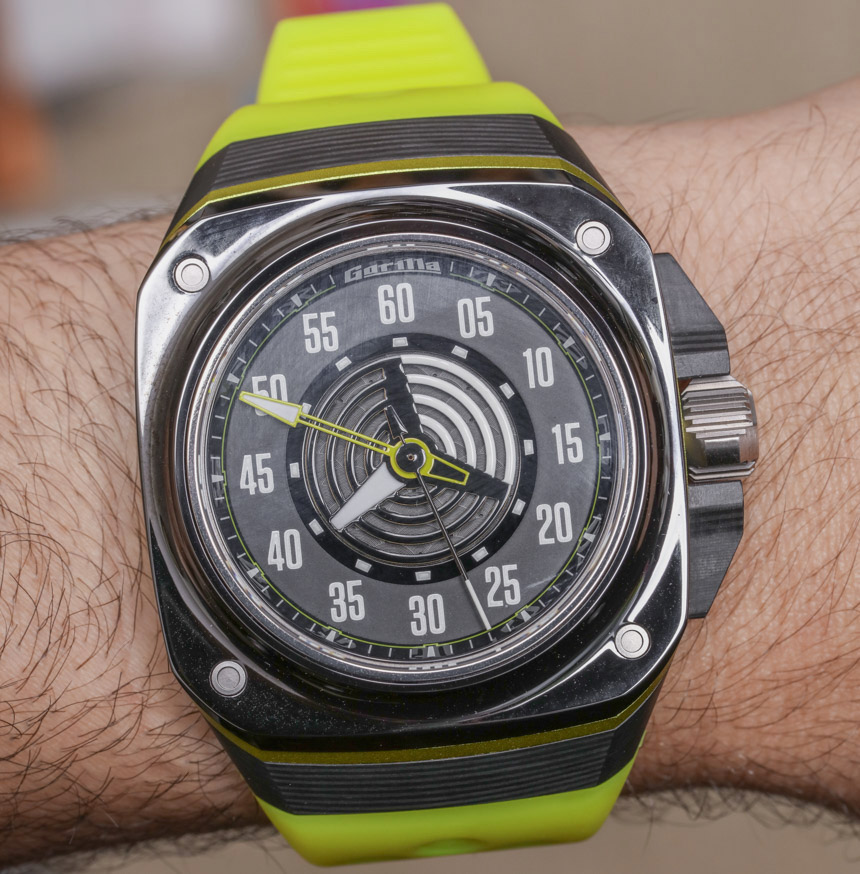 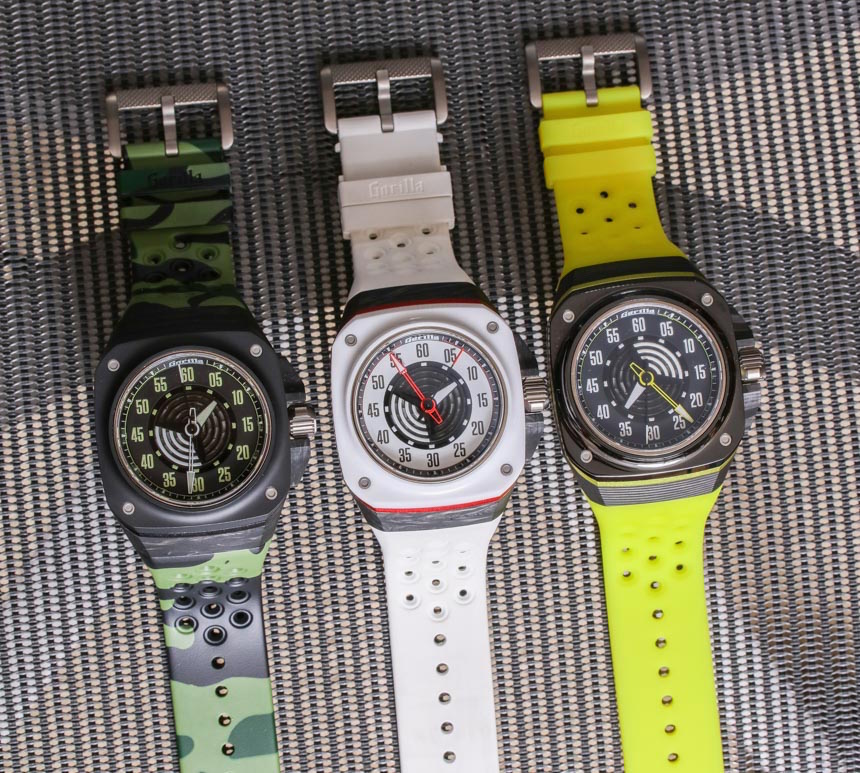 If the design of the Gorilla Fastback isn’t for you, give it a bit of time to grow on you. If it still isn’t for you, then move on and wait for something else to come out that is more to your taste. For those who find the original black and red, or one of these new colors for the Fastback appealing, here is why you might want to take the timepiece collection seriously. 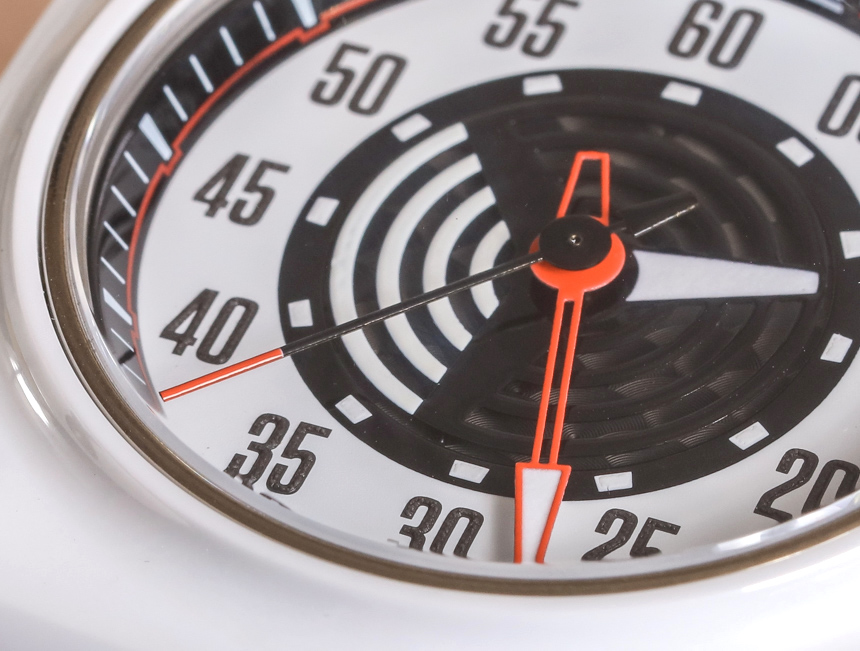 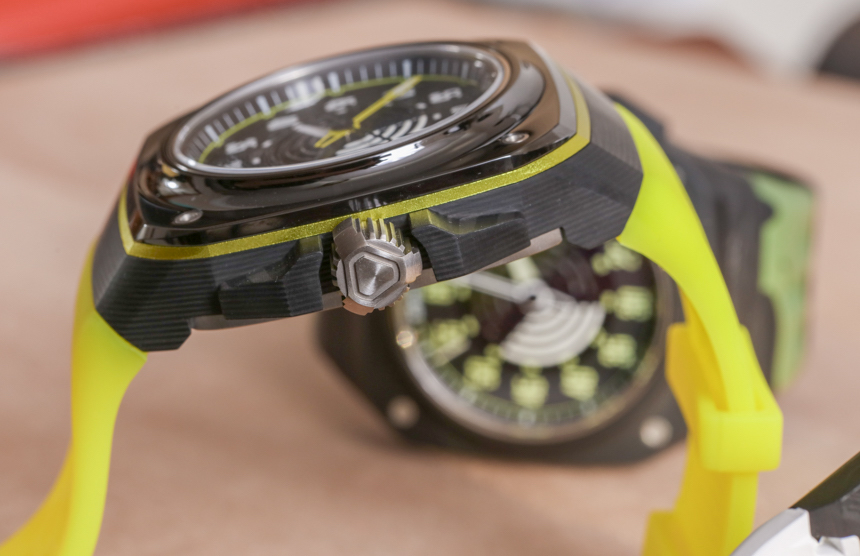 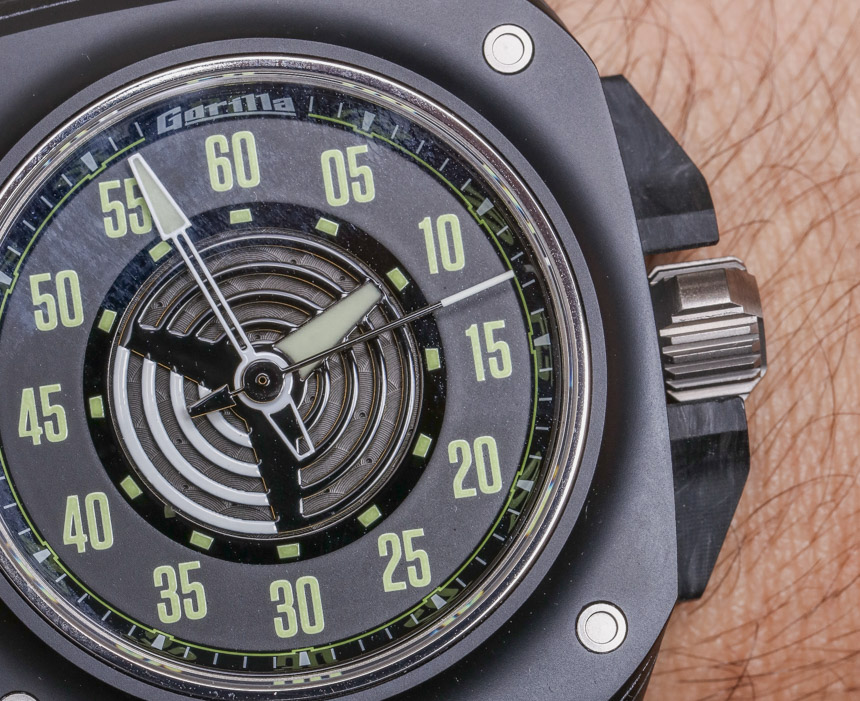 There is more to be impressed about the with Fastback than its pedigree as coming from a guy who helped usher in a generation of new Audemars Piguet Royal Oaks (yes, despite many looking the same, there have been at least some changes in the 45 years since the collection has been around). The overall case and dial construction is more complicated than cheaper watches, and about as complex as something from SevenFriday or Dietrich. With that said, the various parts and materials fit together nicely like a neat sandwich. 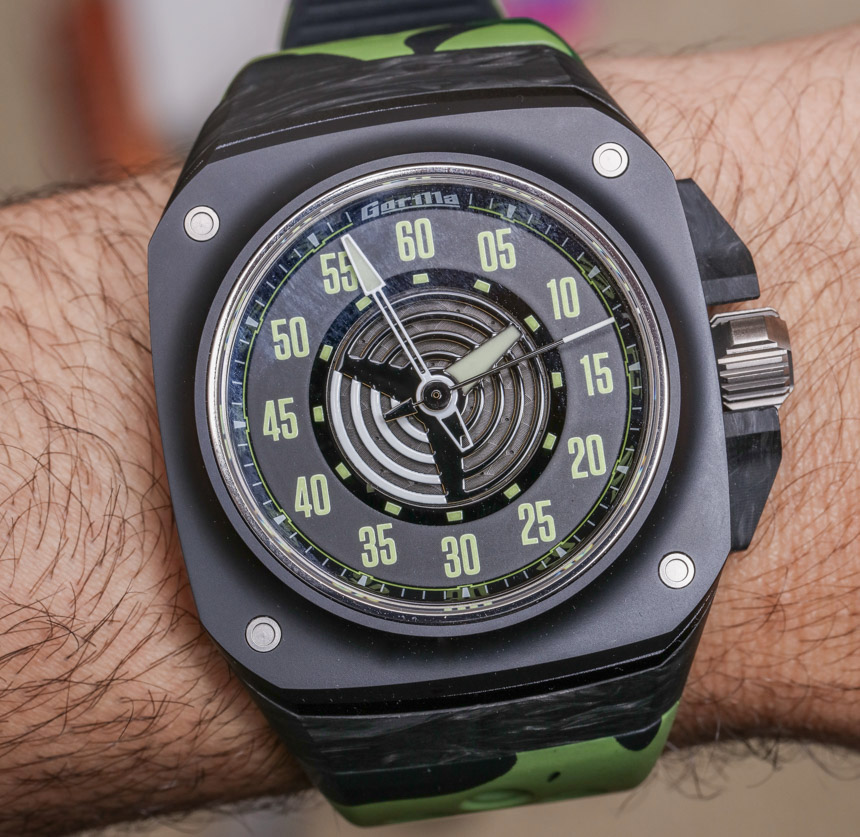 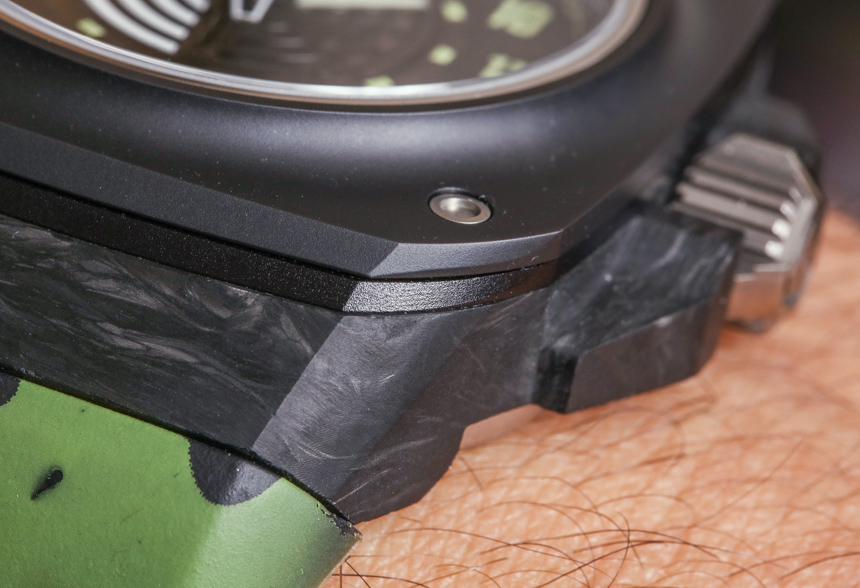 The 44mm wide (48.5mm with the crown) case (water resistant to 100m with a screw-down crown) is a layer cake of forged carbon (yes, I am going to point out that when Audemars Piguet first introduced forged carbon – while Octavio Garcia was there – it was in a watch that I am pretty sure cost over $30,000). The case then has a thinner piece of colored anodized aluminum. It isn’t that aluminum is particularly desirable, but it is a part that isn’t going to be touched much and aluminum is pretty much the only metal (that I know of) that can be painted in this manner. Above that is a ceramic bezel and sapphire crystal. Added to the polished ceramic bezel is now a matte sandblasted black ceramic bezel as well as a white ceramic bezel. 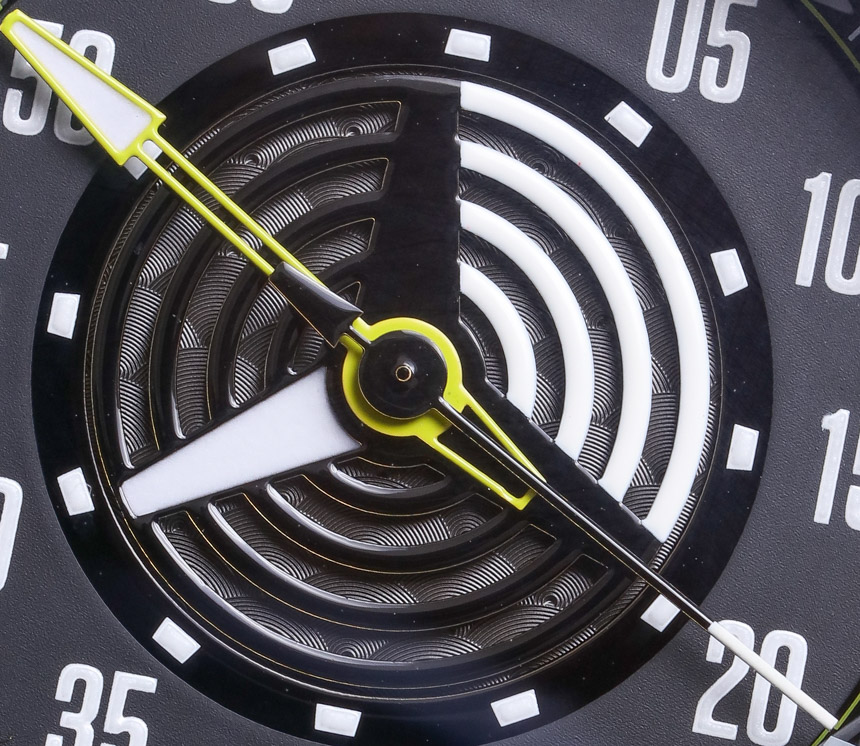 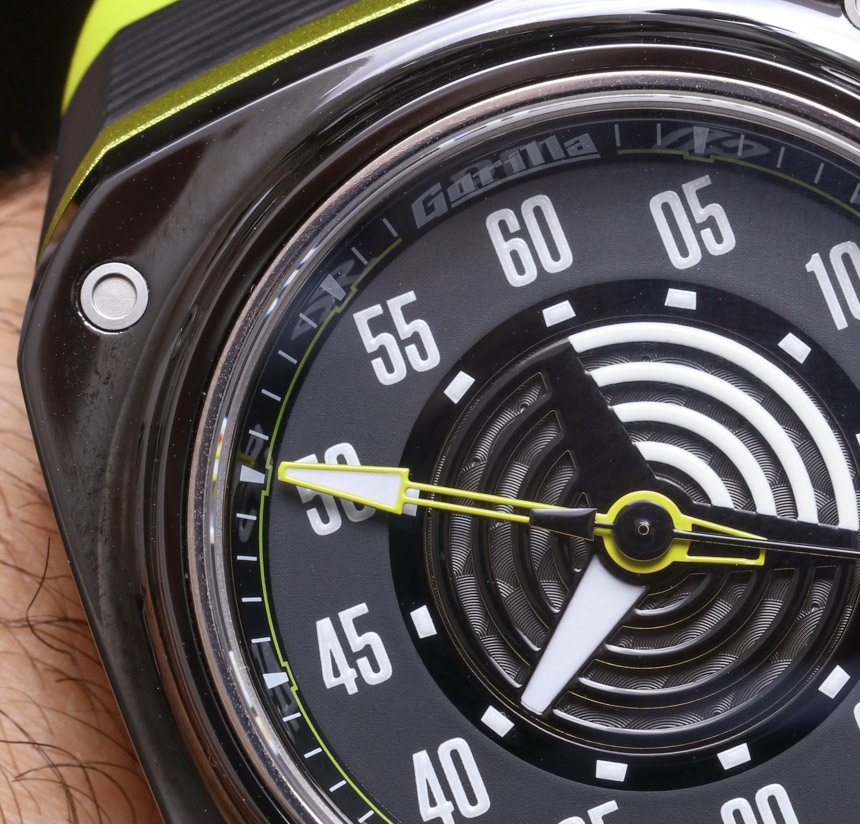 Reading the time is easier than the otherwise complex “instrument gauge-inspired” dial would otherwise lead you to believe at a glance. It is nevertheless easier to read than most SevenFriday and Dietrich models. The dial is time-only with a centrally mounted seconds and minutes hand, along with a disc for the hour hand. The dial is a good mixture of visual interest, legibility, familiarity, but also some new things to look at. The semi-skeletonized hour disc is a nice touch. 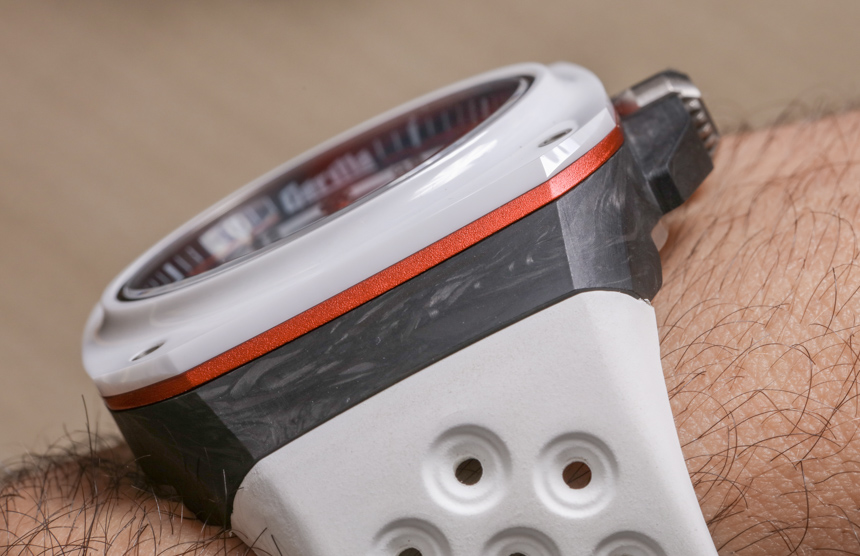 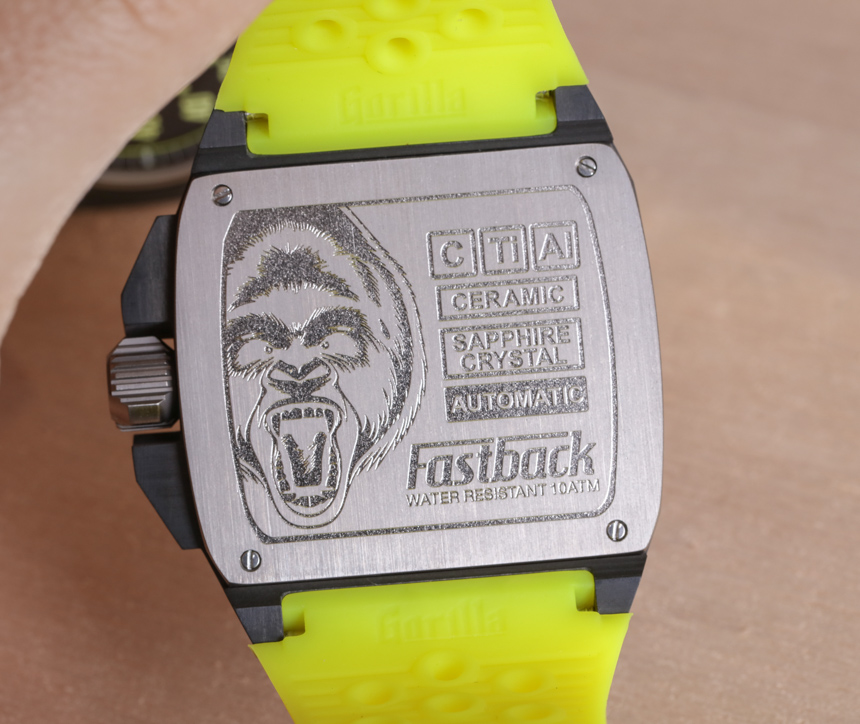 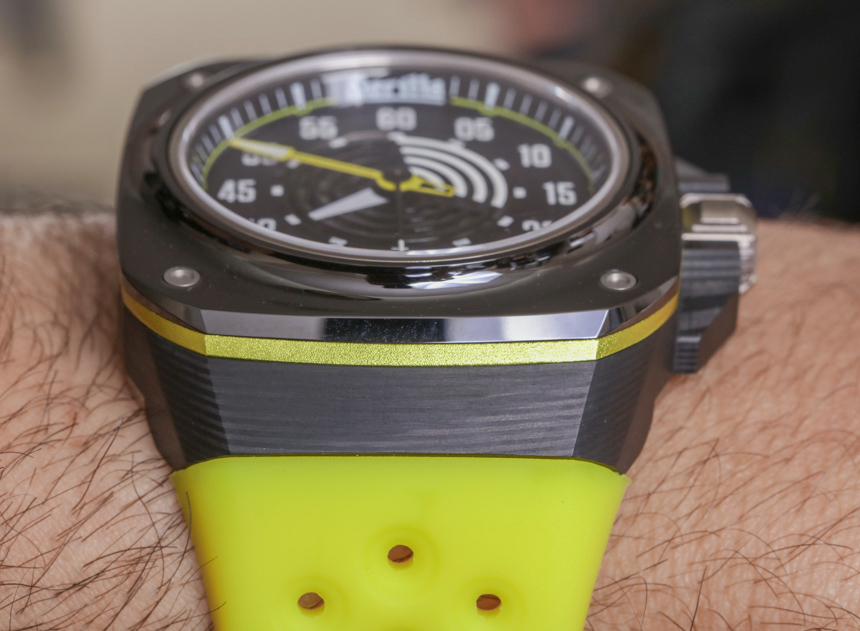 I personally think the watch case is more a winner than the dial, but the dial grows on you and is actually the easier thing for Gorilla to modify in the future (cases are just a much bigger commitment). Clearly, Garcia and team put the effort where it counted, and even though this isn’t a “Swiss Made” watch, it is otherwise formed and conceived in Switzerland. 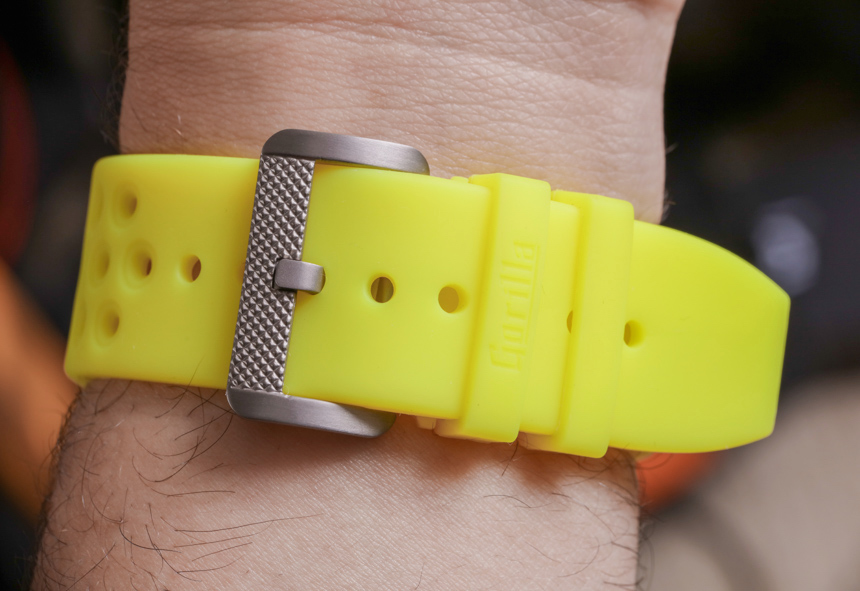 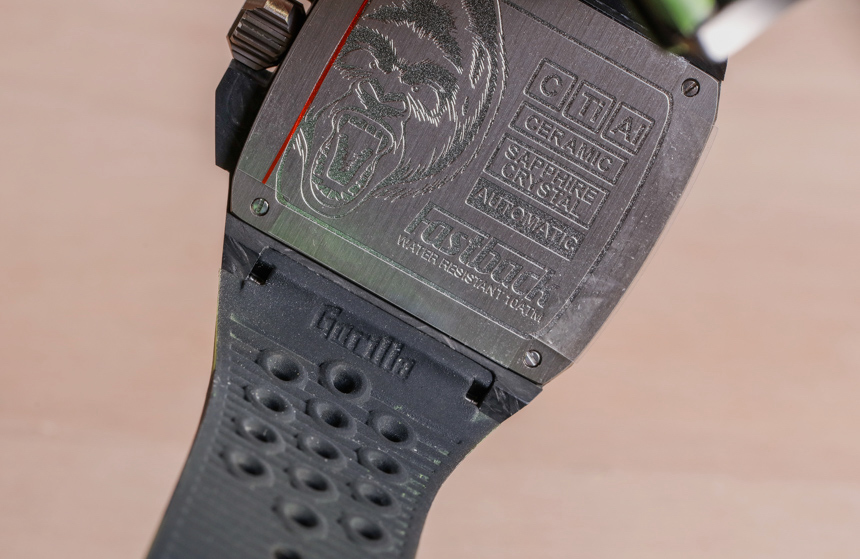 You don’t get Swiss Made outside of a Swatch product very often for these prices. The movement inside of the Gorilla Fastback is a Japanese Miyota 8215 automatic. I would have preferred Gorilla using a more modern and better performing Miyota 9015. I am sure there is a decent reason why they didn’t but again those movements don’t cost all that much more. I suppose it would have added that much more cost and it was important for Gorilla to come out of the gate with a product at this price point. It just really makes it that much more impactful to the collector market that Gorilla needs to appeal to first prior to getting any street cred with the fashion or lifestyle audience. 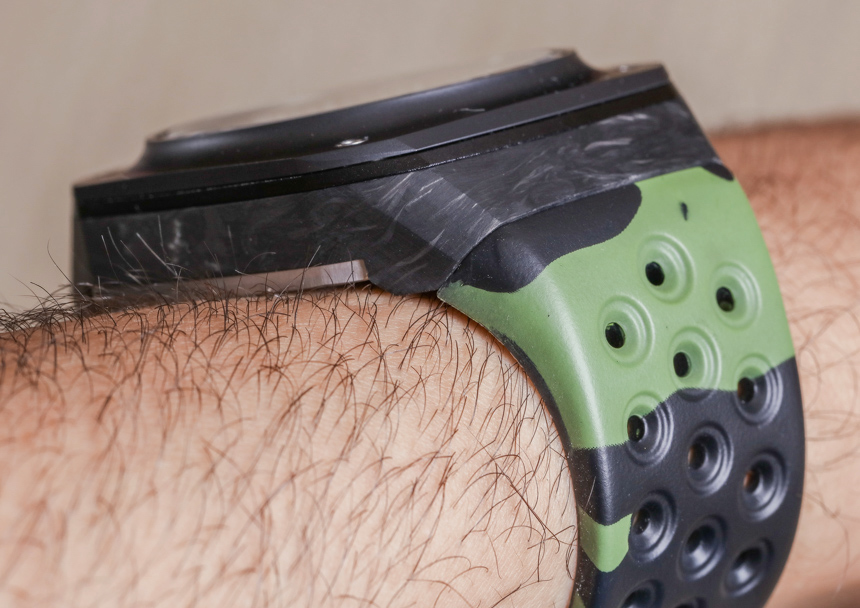 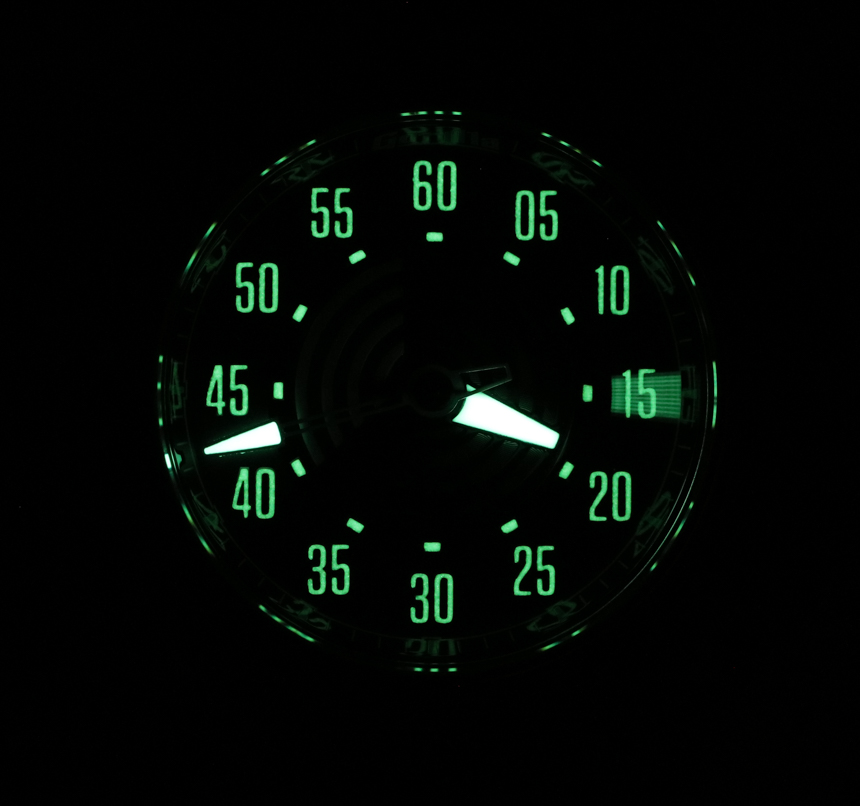 If Gorilla hits it big with those larger consumer demographic audiences, then they could be in line to make some serious money. In a sense, that is the gamble any company like Gorilla with more “real world pricing” strategy is betting on since they need volume to remain profitable. The traditional Swiss luxury watch industry often prices its products so high so that they don’t need to sell very many. What happened over the last 15 years is that they forgot with exclusivity pricing, you can’t at the same time mass produce products. 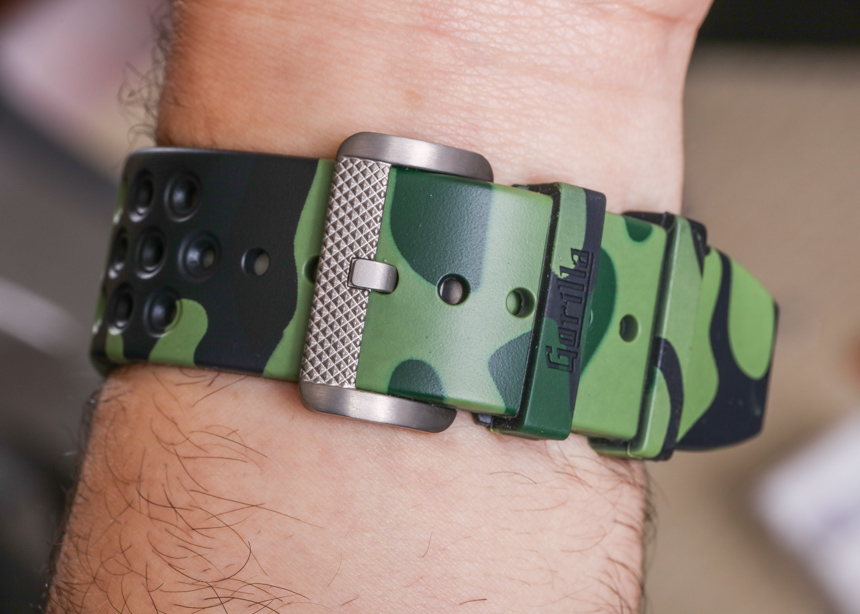 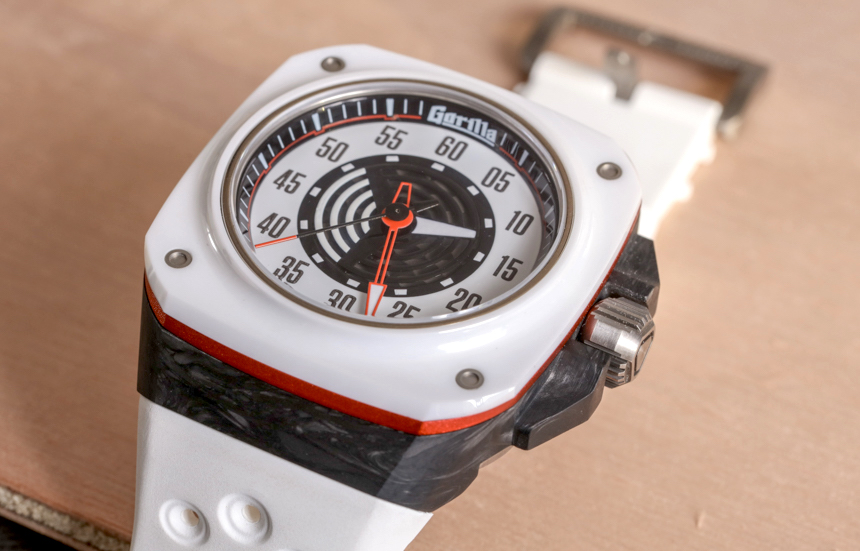 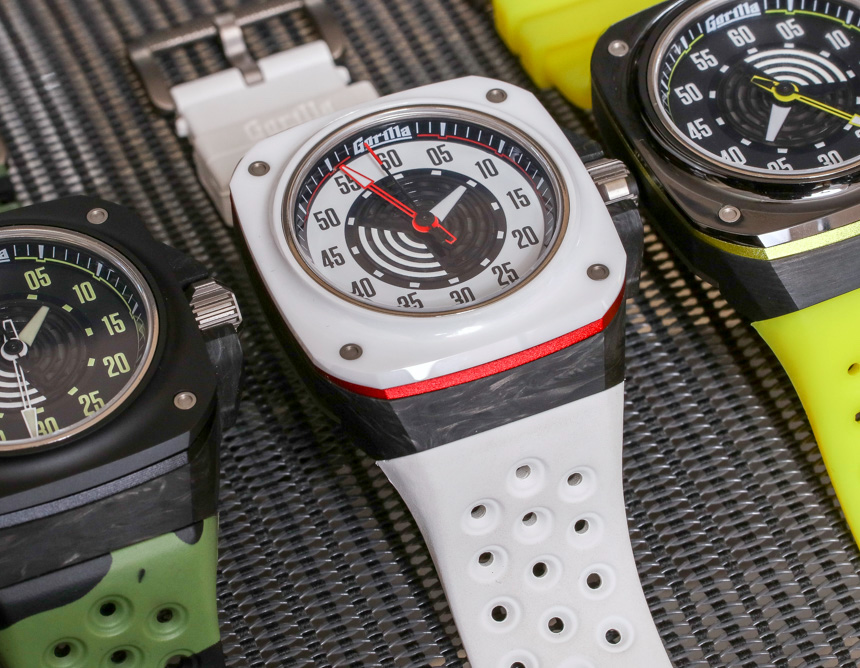 Gorilla isn’t the first of its kind, but it is still a rare bird (mammal) in Le Brassus and around “watch country” where Octavio still resides (he isn’t a Swiss native) where the companies in the area sell much more expensive items for the most part. Garcia can’t be loved by all his neighbors for going from the great AP to producing watches with Asian movements that are sold directly to customers on the internet. Even though this more modern business model is hardly news to most people who participate in the watch community online – I can imagine the feathers that Garcia ruffled on his way to getting up Gorilla watches. 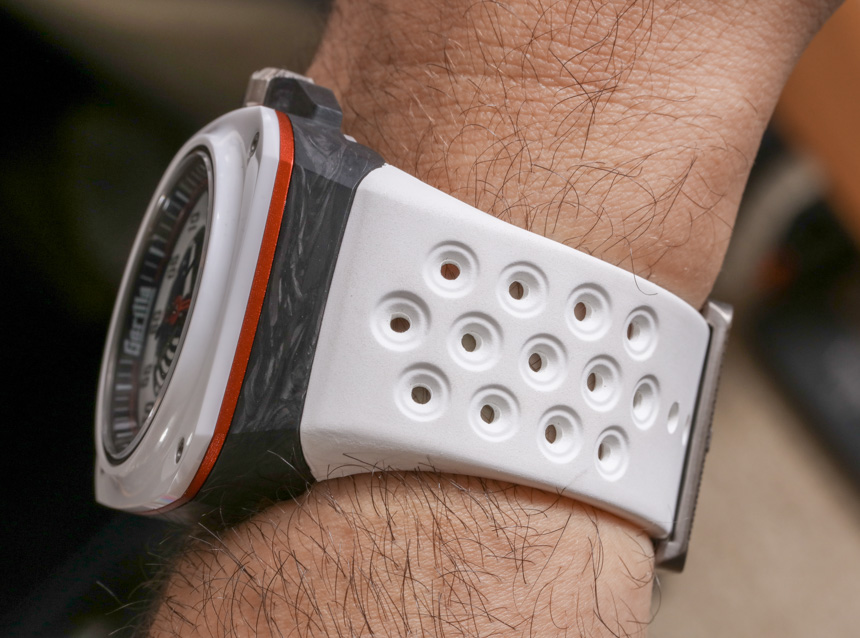 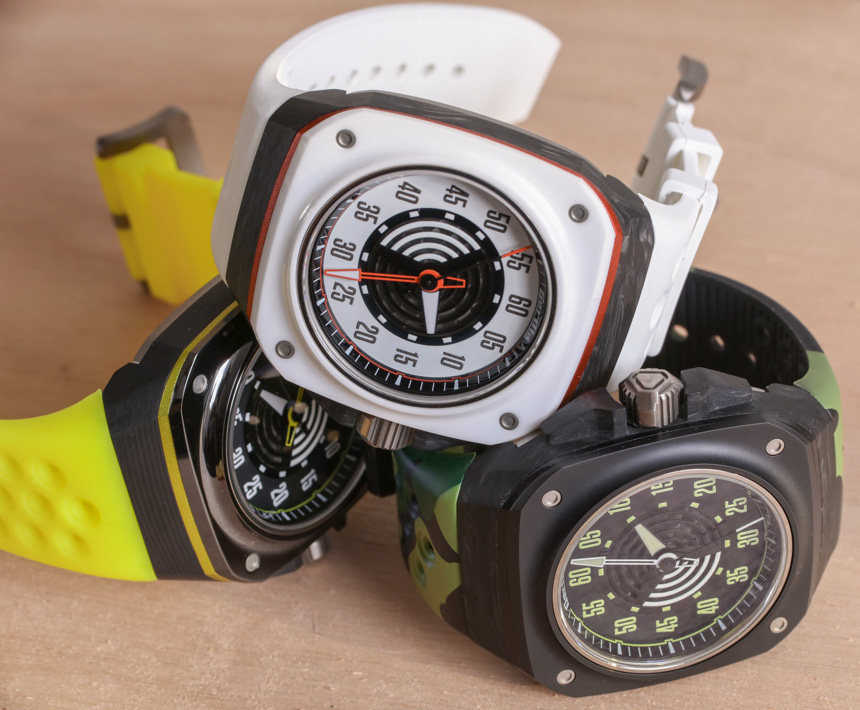 Can you guess which one is my favorite? The black forged carbon case with the white ceramic bezel of course. The three new Fastback models come with colorful rubber straps (with titanium buckles) as the Gorilla Fastback Rally White, Fastback Acid Green, and Fastback Phantom Black (with the camouflage-style strap). That makes for a total of four versions of the Gorilla Fastback, each with the price of $880 USD. gorillawatches.ch