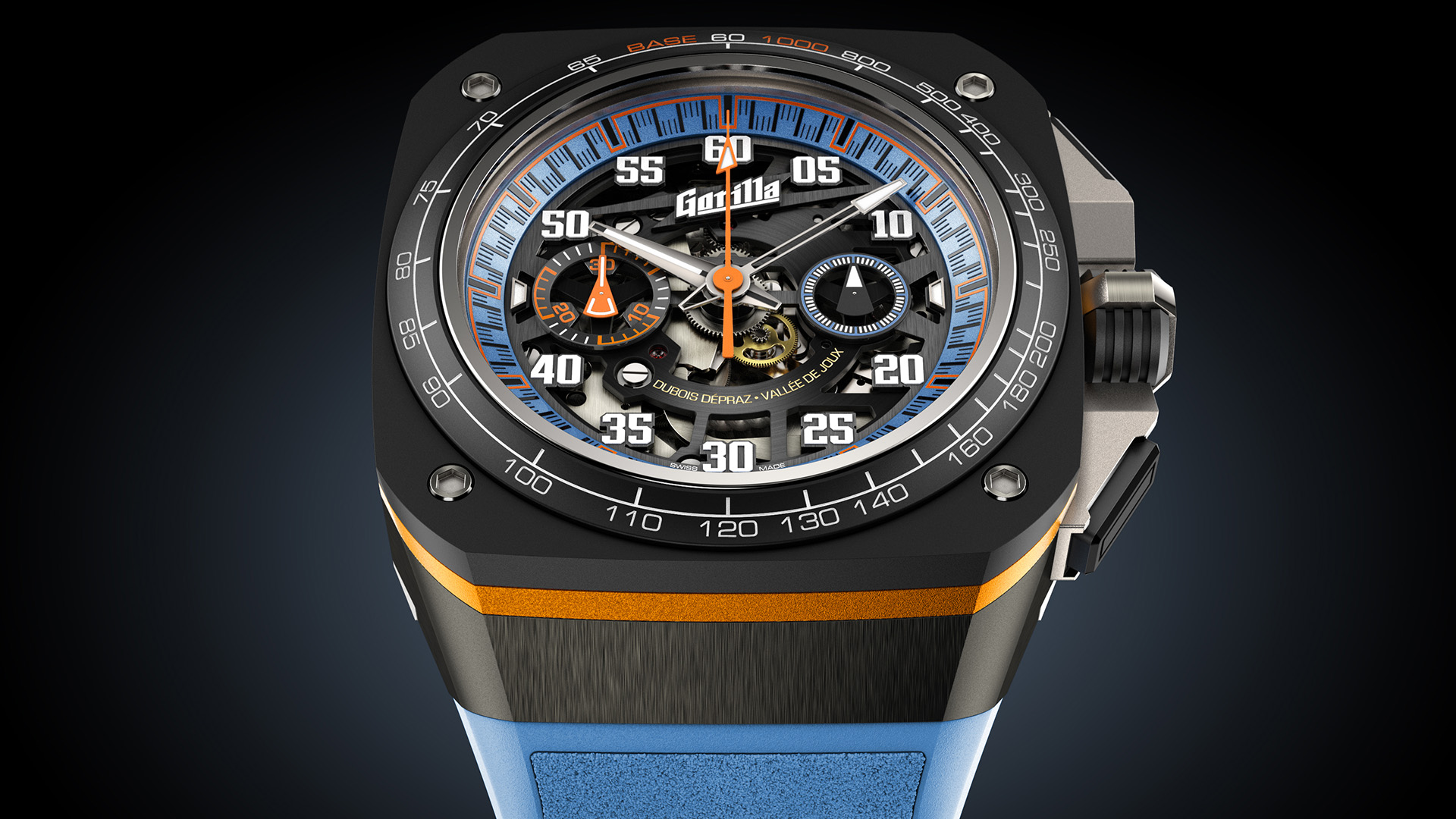 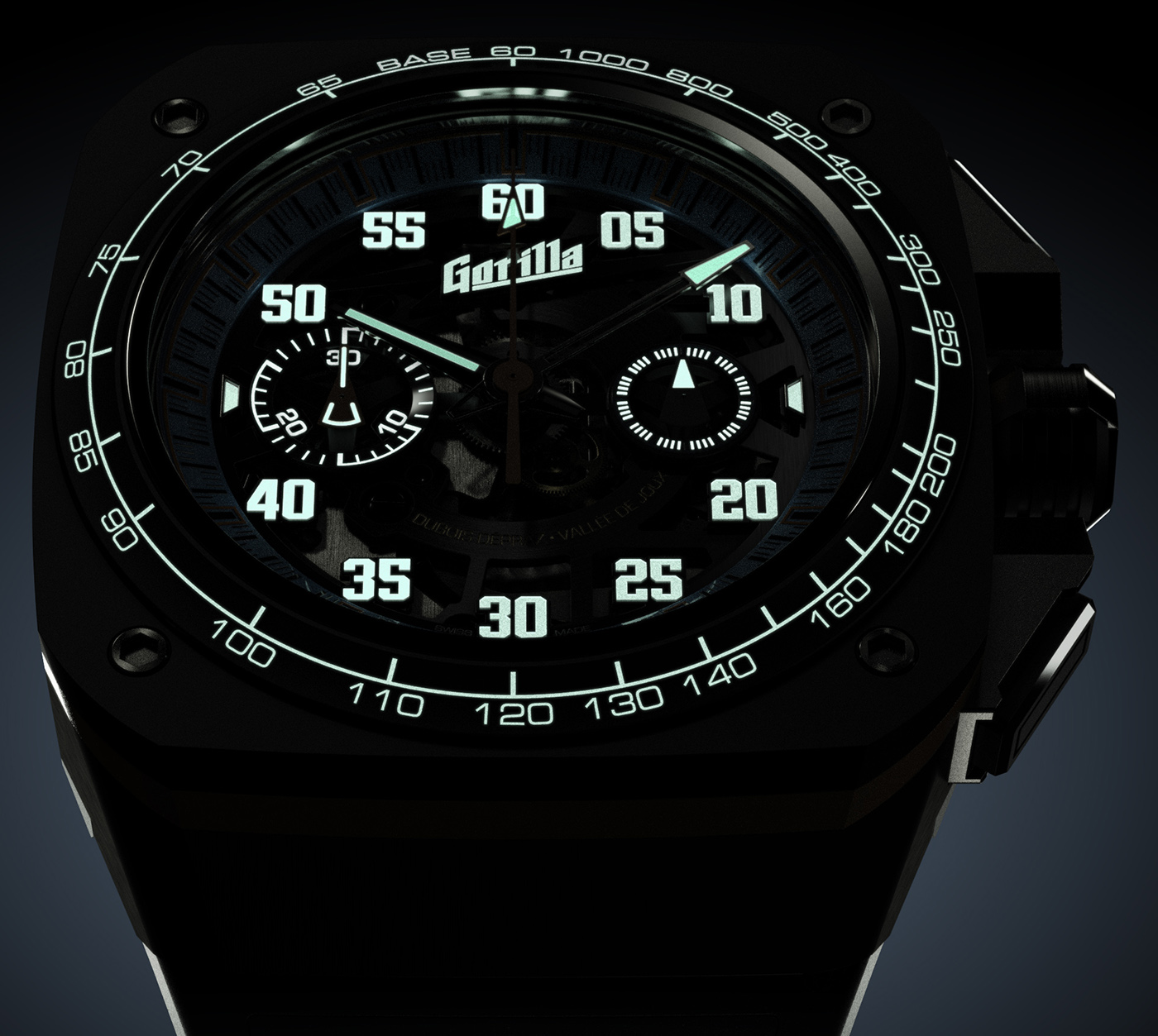 Since its birth several years ago under the guidance of former Audemars Piguet Chief Artistic Officer Octavio Garcia, Swiss independent brand Gorilla has built an aggressive visual style dedicated to reinterpreting the classic American muscle car aesthetic of the ‘60s and ‘70s. Despite the automotive bent, the brand has focused its releases on three-handers and a unique riff on the wandering hours complication, and has never developed a chronograph – until now. Gorilla’s first-ever chronograph release is a suitably wild introduction from the brand, combining its beefy Pro Touring-inspired design language with an impressively intricate custom skeleton chronograph module by Dubois-Depraz. The limited-edition Gorilla Fastback Thunderbolt is an unapologetically bold, dramatic riff on the brand’s core themes that adds both a well-executed complication and a tangible sense of fun to the brand’s lineup. 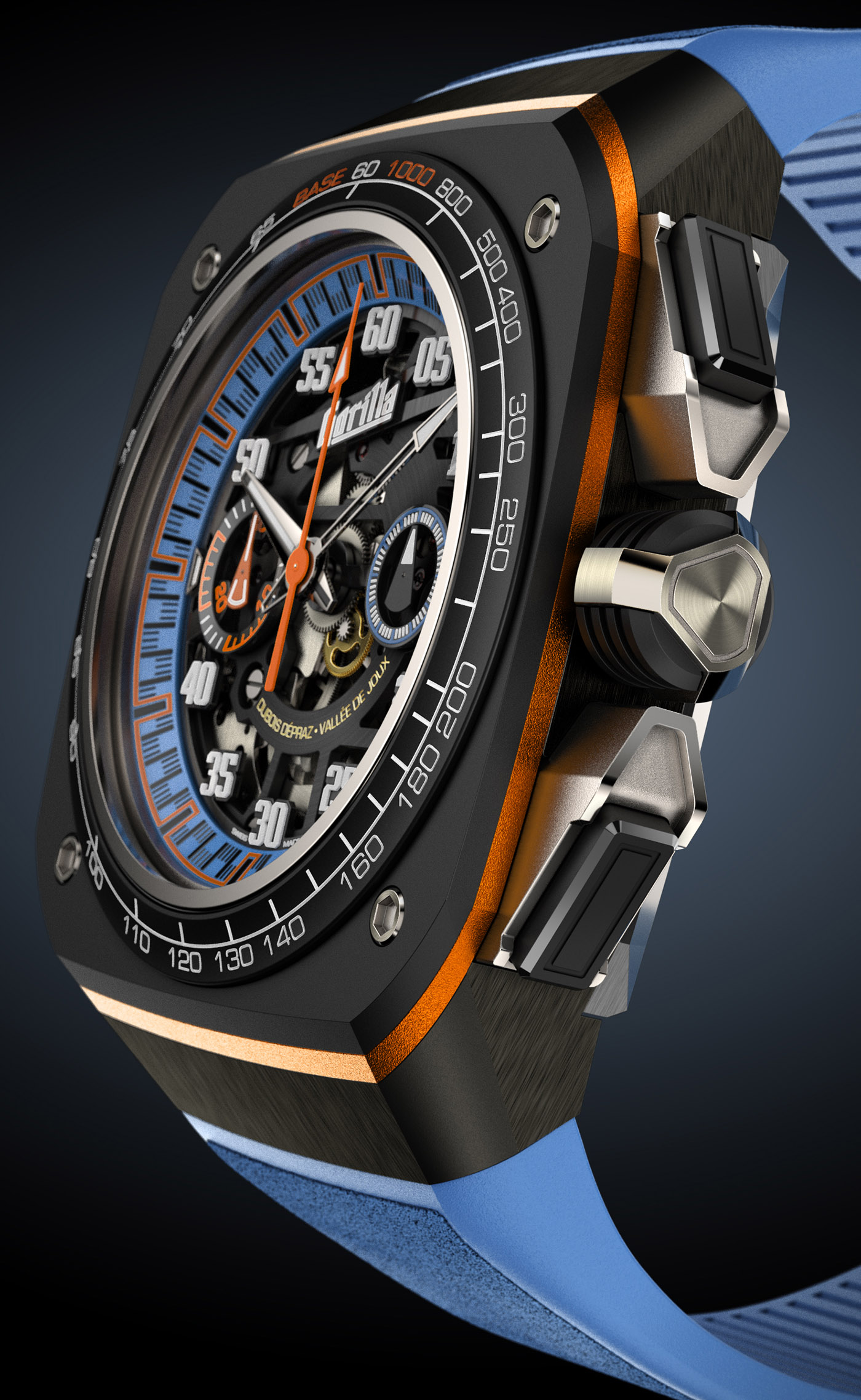 With a diameter of 44mm (48.5mm including crown guards) and a lug to lug length of 57mm, there’s no denying the black DLC titanium case of the Gorilla Fastback Thunderbolt has silverback-sized proportions. The angular, squared-off case design likely leads this one to wear larger than the numbers suggest, as well, although the overall thickness is a decidedly reasonable 13.8mm. Once one moves past the sheer scale, however, the case of the Gorilla Fastback Thunderbolt offers an impressive amount of visual detail in images. Beyond the brushed facets of the black DLC titanium main case, the Fastback Thunderbolt adds variety and breaks up its visual profile with the use of multiple layers. The brand’s signature “pinstripe” case ring is executed here in orange anodized aluminum, giving the case a vivid and flashy highlight while separating two layers of matte black. Gorilla crafts the two-piece bezel in matte black ceramic, complementing the smoothly flowing edges of the outer bezel with a low-profile spooling inner tachymeter bezel. The use of a full tachymeter scale in white lume with bright Gulf orange highlights notably brightens an otherwise mostly dark design in images, while helping to establish the brand’s racing-inspired feel. Of course, with the addition of a chronograph complication comes the addition of pushers, and Gorilla introduces these new elements with an imposing angular multi-part look. A set of truncated matte Grade 5 titanium wedges form combination pusher guards and crown guards, immediately drawing visual attention to the new element while smoothly integrating with Gorilla’s blocky monolithic design language. The matte black ceramic pushers are nested inside these housings, with an engraved and chamfered rectangular form that calls to mind old-school throttle pedals. The 3 o’clock crown is also extensively reworked here, with a multi-part titanium and ceramic look that adds a variety of finishes and forms to the case side. Despite the multi-layer construction and sapphire display caseback, the Gorilla Fastback Thunderbolt is rated at a solid 100 meters of water resistance. 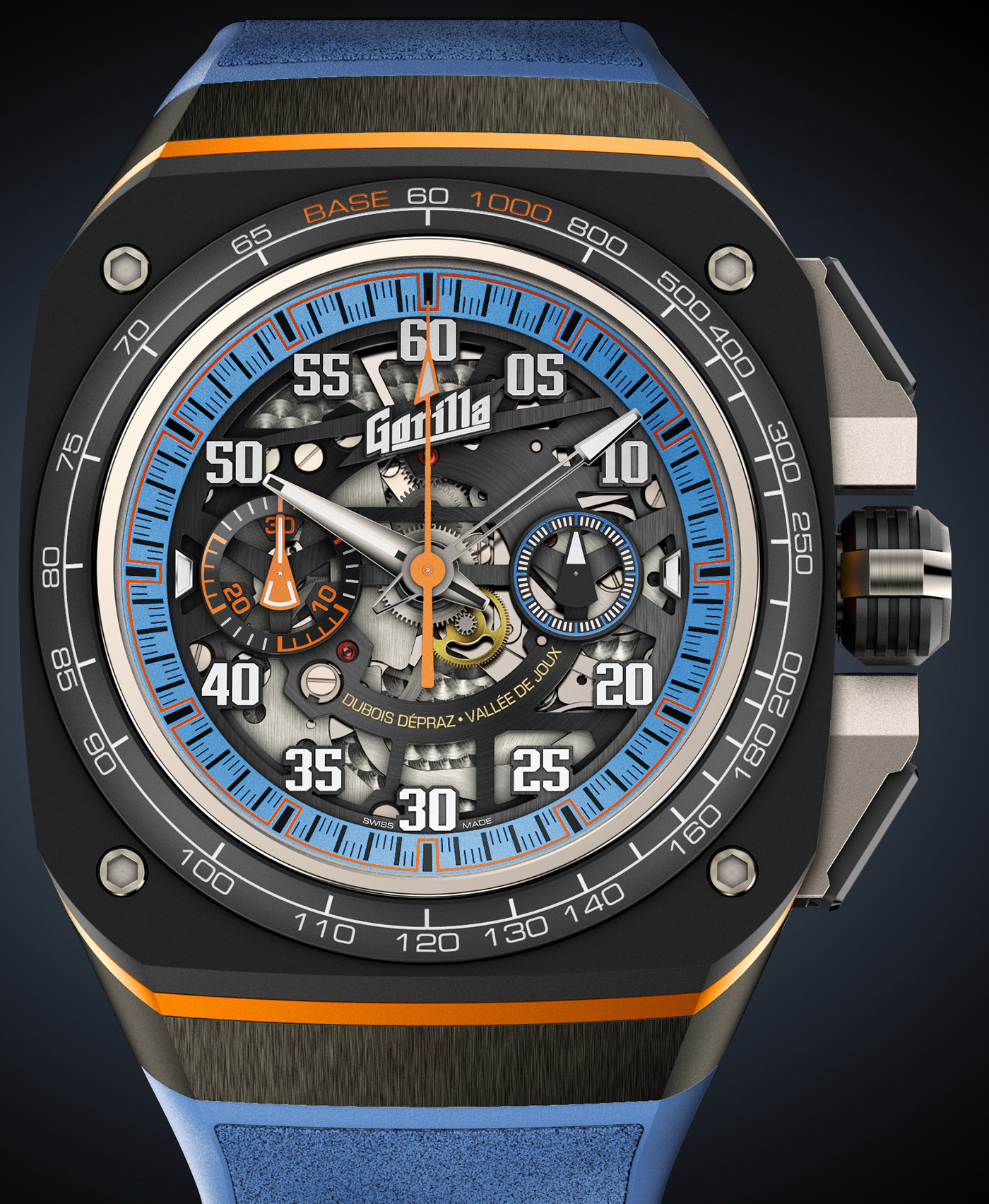 While the case of the Gorilla Fastback Thunderbolt is smooth, squared-off, and monolithic, the skeleton dial instead takes a far more intricate and detailed approach. The view beneath the sapphire crystal is dominated by the web-like tangle of brushed black bridges that form the custom Dubois-Depraz DD268 chronograph module. Far from being a random assortment, however, the forms of these bridges work to emphasize and frame key elements of the gear train in images, while special three-armed bridge segments form the basis of the two skeleton subdials at 3 o’clock and 9 o’clock. Perhaps the most clever element of these skeleton elements stretches between 10 o’clock and 2 o’clock, however. Rather than clutter an already intricate dial design with “Thunderbolt” branding, the brand instead takes a more expressive and figurative approach. The italicized applied Gorilla emblem sits atop a brushed black segment with a stylized zigzag thunderbolt shape, injecting the design with added playful personality. Although pared back to reveal as much of the movement as possible, the dial design still carries on Gorilla’s signature look. The chapter ring features the brand’s standby Gulf Racing-inspired powder blue and orange colorway, laid out across a bold checkered flag-style seconds scale. The skeleton minute hand is likewise a Gorilla staple, augmented here with a bright orange central chronograph seconds hand featuring a slanting stylized arrow tip. Gorilla’s signature Arabic minute numerals receive a substantial rework here, however, abandoning the light and elongated look of ‘60s American dashboard gauges in favor of a more modern, angular design that feels spiritually closer to the numbers on sporting uniforms in initial images. The skeleton subdials also add a wealth of personality and vibrant color here, particularly through the orange partial scales and wide counterweighted chronograph minutes hand at 9 o’clock. With so much visual detail and layering at play, Gorilla wisely opts to omit a date window for the Fastback Thunderbolt. 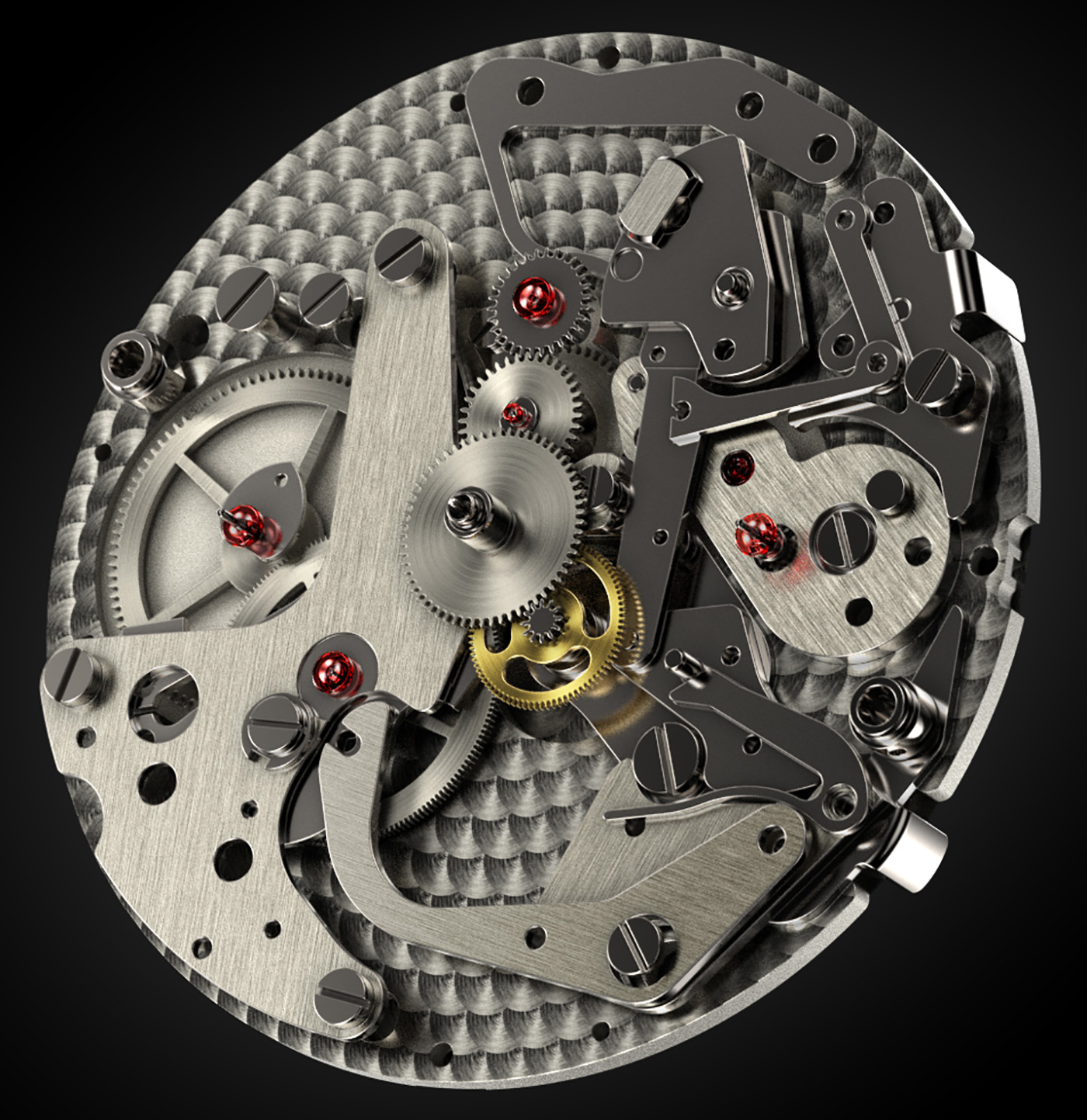 Gorilla powers the Fastback Thunderbolt with an elaboré grade ETA 2892-A2 automatic movement topped with a custom Dubois-Depraz DD268 chronograph module. While not as beloved among purists as an integrated chronograph movement, this modular approach has its benefits, most notably easy parts availability and servicing for the base movement. However, the lack of an integrated movement at this price point may prove controversial to enthusiasts. The 2892-A2 is a common sight across much of the watch industry, but here Gorilla adds a layer of new decoration including tight perlage across the baseplate. Performance, however, is carried over from the standard 2892-A2 with a relatively low 42-hour power reserve at a 28,800 bph beat rate. The Gorilla Fastback Thunderbolt is paired with an integrated FKM rubber strap in Gulf powder blue with a textured Alcantara insert. 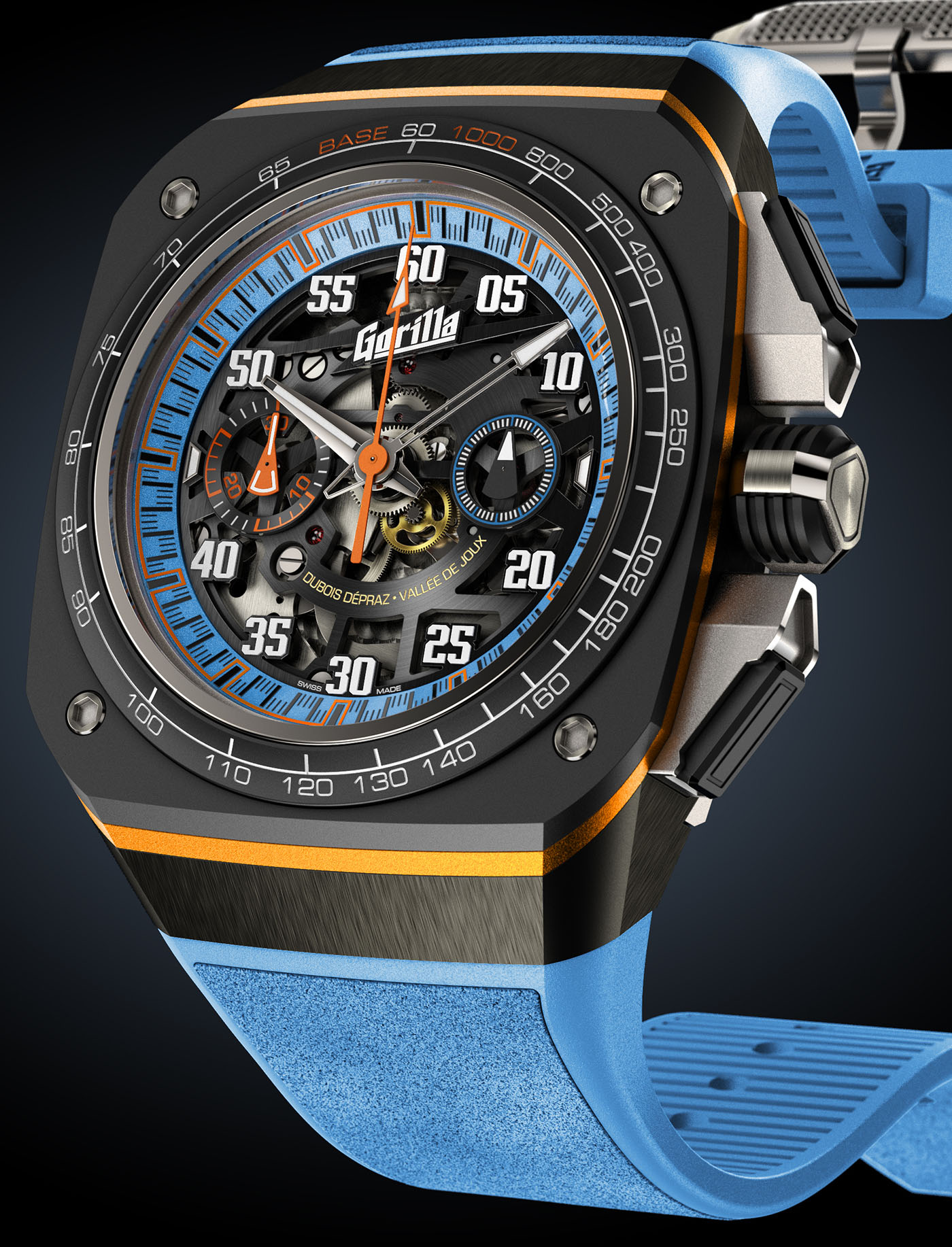