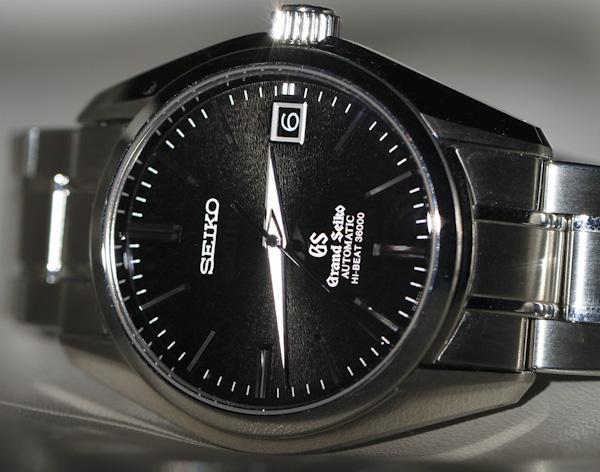 The word “Grand Seiko” either means a lot to you or nothing at all. Seiko’s high-end brand built entirely in Japan by their most skilled watch makers is a meme unto itself. More so, to the Japanese it means one thing, while it means something totally different to the rest of the world.

Grand Seiko as a line started in the mid 20th century (specifically in 1960), available only in Japan. For decades Grand Seiko was available exclusively in its homeland, as well as some select zones outside of Japan. If you heard about Grand Seiko and wanted one you had to contact a dealer in Japan that was willing to ship it overseas to you. As of last year, Seiko has started to ship Grand Seiko watches (not all of them) to the world. Watch lovers couldn’t be happier.

In Japan Grand Seiko is source of national pride. Watch making is a valued art form, and Japan’s ability to make good watches is a reflection on national engineering and artistic ability. A Japanese person who wears a Grand Seiko watch is a person who takes pride in what Japan produces. Outside of Japan the Grand Seiko collection is popular for a different reason – and it has to do with the reputation Japan has for quality and reliability. I recall growing up wanting everything I bought to be made in Japan. For the most part this included electronics and toys, but they made the best electronics and toys I could find. If it was made in Japan, I felt as though a better mind than mine own imagined it, designed it, and manufactured it. Japan was synonymous with quality. For my parent’s this was a strange thing as just a generation earlier Japan was synonymous with crap – just as much of what comes out of China is known for today. Therefore, if Grand Seiko sat as one of the most meticulously designed and made high-end items in Japan, I wanted it. I didn’t even need to understand or see the product… I just trusted what I knew about Japanese products such as this, and wanted it. Then years later I finally started to get my hands on them. 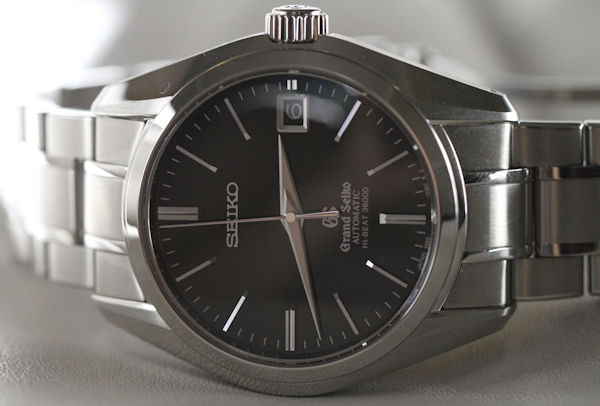 Switzerland for the most part hates or merely tolerates Seiko. Why? Because in many ways Seiko plays the game much better than they do. Don’t get me wrong, the Swiss and Germans do a lot of things Seiko doesn’t do, but that doesn’t mean Seiko couldn’t do it if they really wanted to (which seems to be the predominant agreement in the industry – not everyone wants to be good at all the games). Seiko exists as a foreign invader… opting to copy, optimize, or innovate Swiss things where they see fit. Seiko also has released an incredible number of innovations compared to European watch making that has remained more or less the same for generations (aside from some materials and manufacturing changes). In addition, Seiko is mostly responsible for the quartz crisis (revolution) that wounded the Swiss ego and economy in a big way in the 1980s. Last, Seiko offers a large amount of products that meet the “in-house made” criteria for prices at fractions of what the Swiss charge. This damages the value proposition of luxury watches across the board. Seiko is a true innovator, disruptor, and force to be reckoned with. They are also super traditionalists and engineers at heart. Something the Grand Seiko collection is all about. 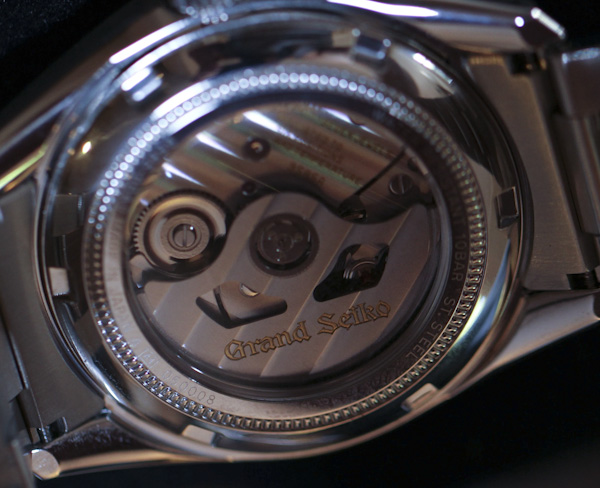 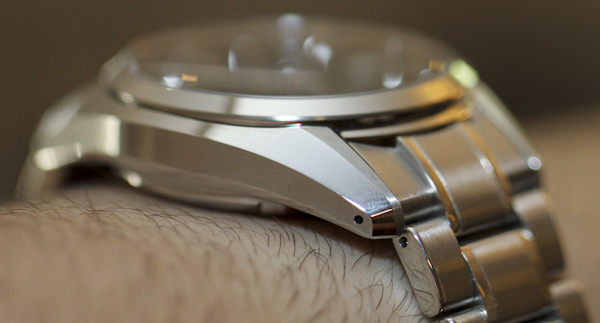 In the late 1960s, Seiko started to experiment with so called “high beat” (also referred to as “Hi-Beat”) movement. The first Hi-Beat movement was released in 1968 with the caliber 61GS. These ran at 36,000 beats per hour (bph) just like the Zenith El Primero. The key element here was accuracy. A fast operating movement could be more precise and accurate at the same time. If you know anything about Seiko history you know that they are obsessed with accurate watches (hi-beat, quartz, atomic clock control, Spring Drive).

What made hi beat movements difficult to master was reliability. The fast moving escapements and anchors needed to be specially engineered to prevent excessive wear. This is one of the main reasons that you don’t see more high frequency mechanical movements on the market. We will see how Tag Heuer industrializes some of their ultra high frequency mechanical movements. Seiko mastered the hi beat movement like 50 years ago, and today keeps the tradition alive in this caliber 9S85 automatic movement. Seiko performs in-house movement tests that are actually more stringent than Swiss COSC Chronometer certification. Grand Seiko watches come with movement test certificates (in English and Japanese) that show you the performance of the specific movement. What I also love is a little guide called “Mechanical Watch Movements Handbook” that Seiko also includes. Done in English and Japanese, this charming little book describes with text and images (also cartoons) how your movement works, how to care for it, as well as how to live with it properly. The guide is interesting, thorough, and quite useful. I love Seiko for this stuff. 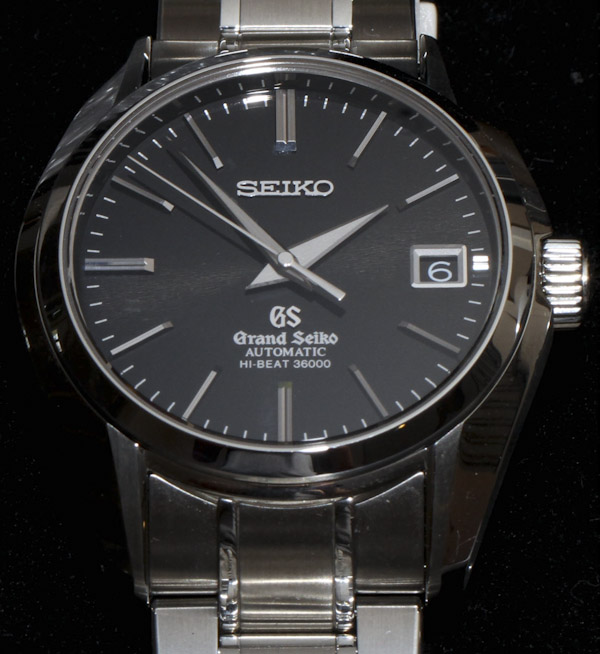 Having said all that the 37 jewel Seiko caliber 9S85 automatic movement is accurate to +5 / – 3 seconds a day. I found it to be very accurate. Power reserve is 55 hours – impressive given that it takes up more energy than slower movements. The movement is visible through a sapphire caseback and is decorated in a Japanese style by Seiko. On the dial the movement displays the time with central seconds and the date. As the movement beats quickly, the seconds hand sweeps very smoothly, almost like the glide hand on a Seiko Spring Drive watch.

The design of this Grand Seiko Hi-Beat Automatic Ref SBGH005 watch overall is classy and tasteful. It is the archetype nice steel watch on metal bracelet. The design of the case is somewhat classic Rolex inspired if you know what you are looking at. It is 40mm wide and 13mm thick (water resistant to 100 meters). Detailing and polish are immaculate – part of what you pay for with Grand Seiko. You’ll appreciate the skilled polishing and the crisp attention to detail all around.

At 40mm wide this traditional design and size is a bit small for me, but I still wear it happily. Many people prefer this size, so I would say it is just right for what Seiko is going for. The larger lugs and middle section allow for the piece to feel a bit larger than you’d think on the wrist. The watch is effortlessly comfortable and demure on your arm. Little details like the inset crown (when it is screwed in), and the integration of the bracelet are very welcome. 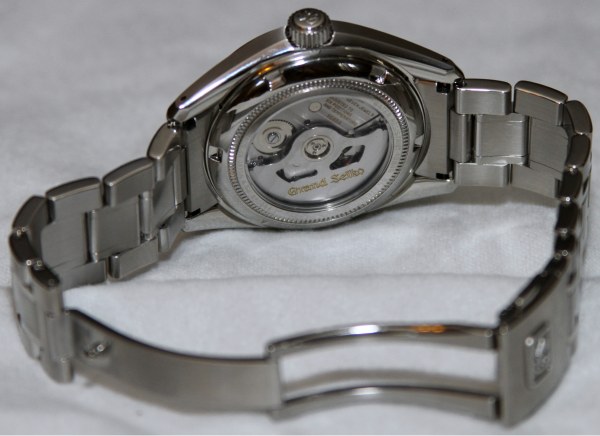 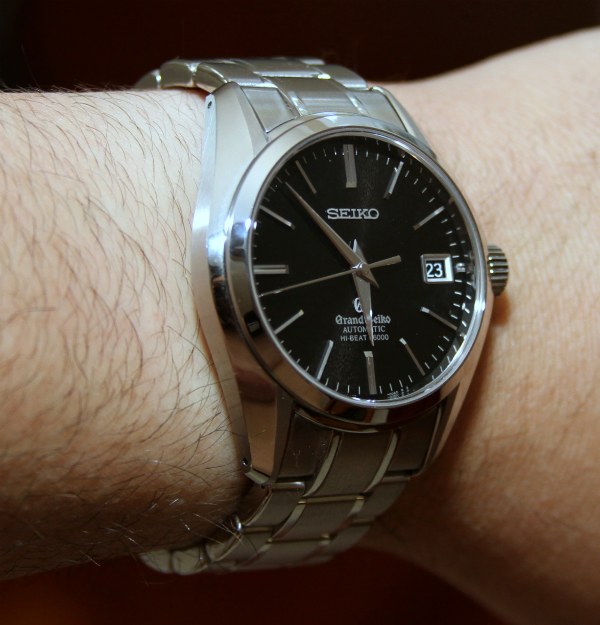 The dial is a testament to Seiko’s heritage. This is a design that Seiko has been using and perfecting for maybe 50-60 years. The applied hands and hour indicators are diamond polished, and proportions are perfect. The sword-like dauphine hands are gorgeous. I like the large-seeming date window with the black disc (amazingly clear but it does not stick out like a sore thumb on the dial), and dual “GS” (Grand Seiko) and Seiko branding on the dial. For the face Seiko uses a black plate that when seen in the right light reveals a stunning sunray texture (the watch also comes in a white dialed version with the Ref. SBGH001). The only drawback of the dial is the lack of lume for darkness viewing. Again, this dial is “classic” 20th century formal quasi-minimalist watch dial… incarnate.

You don’t wear a watch like this in the US to get noticed. Only a select assortment of watch nerds get it. As I mentioned, those that do love these pieces. Grand Seiko has a very loyal following from some of the most discriminating watch nerds around. These watches don’t embody the showy sexiness of many European designers, but are rather an exercise is purpose and poise. Function mingling with reserved form with timelessness in mind. 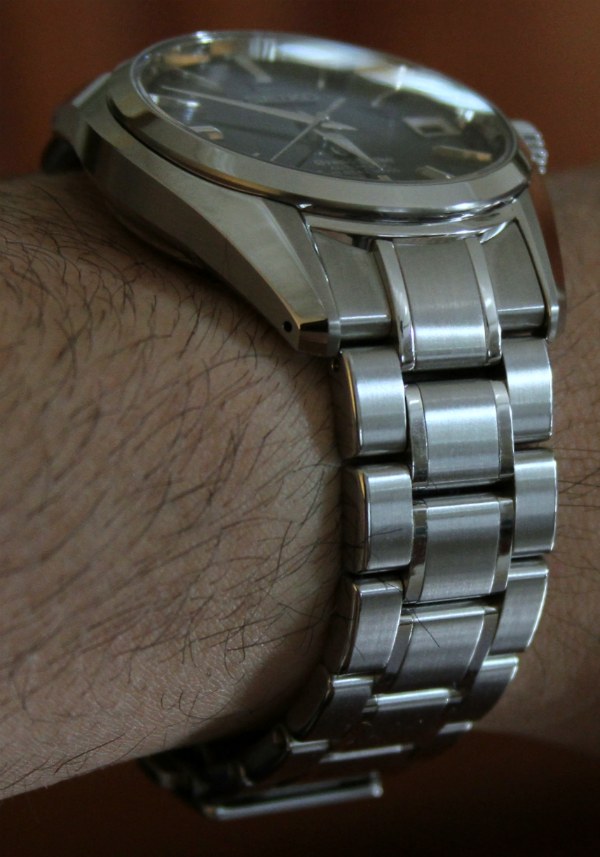 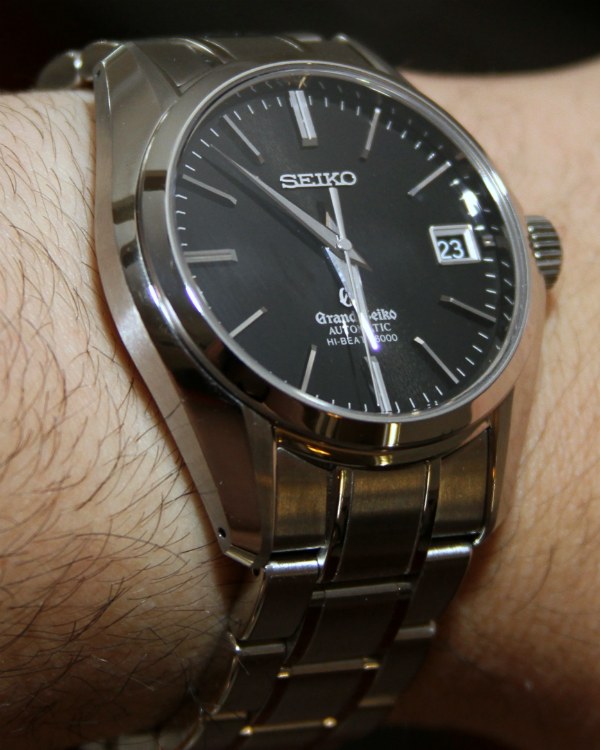 Aside from Spring Drive movements, these Hi-Beats are at the apex of Seiko’s mechanical watch making from a mass produced perspective. There are more complex movements reserved for some high-end Seiko Credor pieces, but those watches have different personalities (and prices). Retailing for $7,200 this ref. SBGH005 is not a cheap watch. In contrast, a similar Grand Seiko watch with a more traditional automatic movement (not Hi Beat) retails for just $4,400. That model (I was referencing the ref. SBGR051 with the caliber 9S65) is smaller at 37mm wide… but you get the idea. Is the Hi-Beat worth the premium? I think it is.

For me, there are two reasons to get a Grand Seiko watch, the Hi-Beat movement which is a specialty of Seiko, as well as the Spring Drive movement. The special movement, case, and heritage complete the Japanese package for me. Emotionally it just wouldn’t be the same with the more typical (though still in-house made) automatic movement or the quartz model. Yes, you get a lot of movement options in Grand Seiko range, but those are my choice picks. Grand Seiko will always have special meaning to me, one that I keep realizing each time I get more excited about a watch like this than I do a new $200,000 Swiss tourbillon based timepiece. Look for these where Grand Seiko watches are sold.