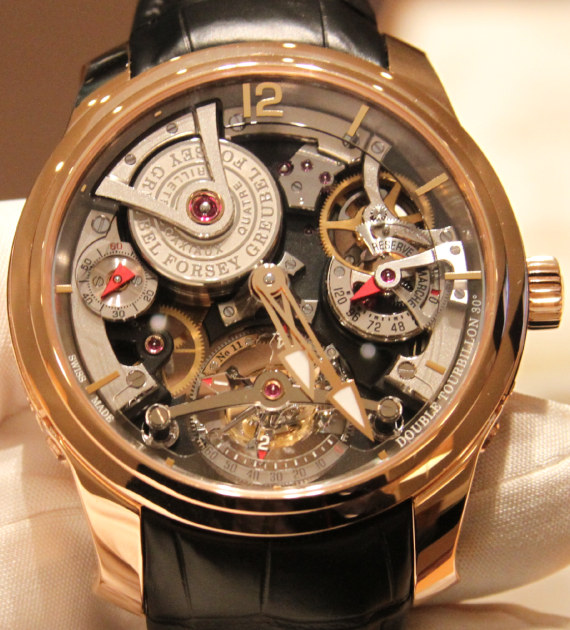 Here is some hands-on treatment of my favorite Greubel Forsey watch. I was happy to spend some wrist time with the Double Tourbillon Technique timepiece last month. About half a million dollars was on my wrist (retail is about $470,000), and it felt pretty darn good. I wrote about this watch on Luxist a while ago when it was originally announced and then again on Haute Living here. And now I will write about it for a third time. I pretty much can’t get enough of it I suppose. For more technical details about the watch you can refer to those articles. I want to share with you what it is like to spend time with the watch, not just “crunch the numbers,” so to say.

At 47.5mm wide in either red or white gold, and even platinum – this is a statement about wealth. I don’t care how little you know about watches, if you see this one someone’s wrist you are going to assume it is expensive. If you wear this watch around people who don’t appreciate it, you either hang out with the wrong crowd, or really wore the wrong watch that day. The watch is, in a nutshell, mechanical art (but maybe a bit secretly so). The Double Tourbillon Technique and watches from brands such at MB&F share a similar theme – a certain celebration of the machine and finely made mechanics. It isn’t so much about what the item does, but more about watching it work, and understanding the enormous about of time and attention required to make it. This is about as opposite of modern industrialization as you can get. Hundreds of hand-loved pieces go into the watch and the movement. Almost not a single of them can be mass produced or industrialized in any way. 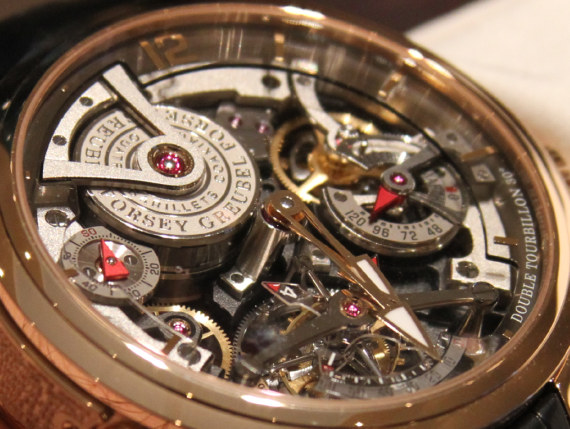 The reason I like the watch so much is because of the movement design. It was styled to be visually appreciated. Most wonderful looking things that a watch can do are impossible to see. Brands give us these fancy computer generated movies that look like spaceship journeys into a movement – with techno music. These little videos are fun and get us excited, but we know that all the cool internal views of a movement are things we will never see with. At the same time, you have movements such as the in-house made Greubel Forsey GF 02s manually wound movement seen here in this watch, that is made to be looked at and appreciate in many angles with the naked eye. The genius is in the layout and open spaces – not merely the functions. Sandwiched by sapphire crystals, Greubel Forsey watches you intently examining the watch on a regular basis seeing the gears turning and the dials moving. It is like a little miniature sculpture gallery on your wrist.

Functions in the watch aren’t extensive, but clearly useful. Although the watch really has no dial to speak of, it is actually really easy to read! Seriously. Around most of the dial is a chapter ring made from sapphire crystal, that has gold hour markers applied to it. Then you have the large hands with lume tipped arrows that are quite conspicuous, even given all that is going on in the dial. Sure it is not going to be a pinnacle of “at a glance reading,” but you don’t need to sacrifice too much function for the form. 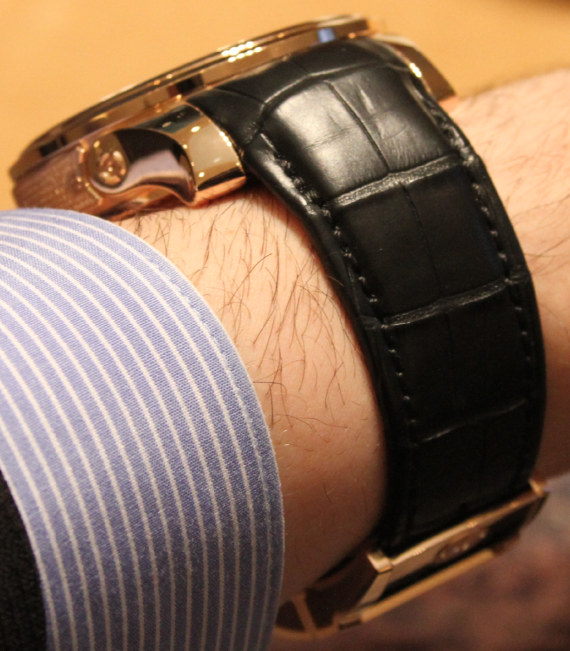 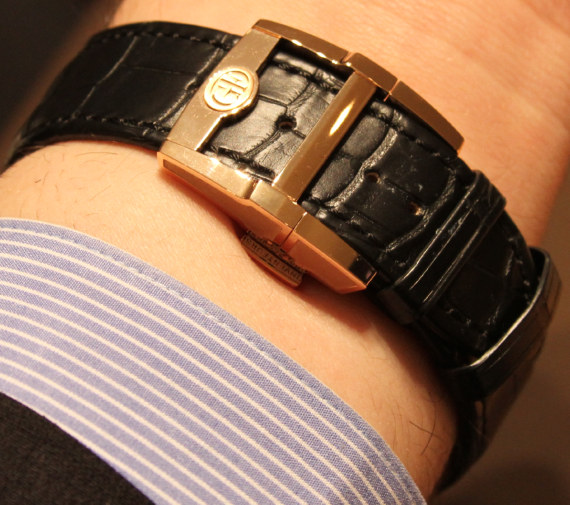 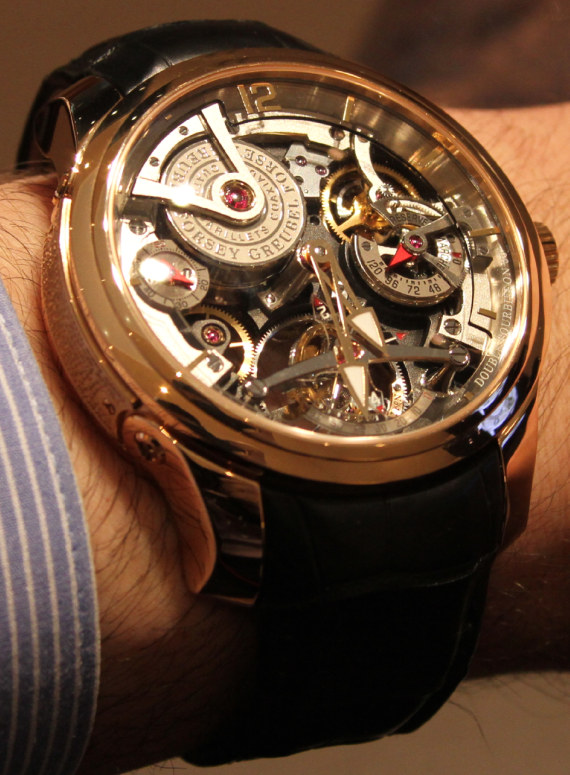 As the name of the watch makes clear, this timepiece has a double tourbillon. What does that mean? Well it is not exactly two tourbillons (like you see in some other watches such as Roger Dubuis sometimes does), but rather one tourbillon located inside of another tourbillon. I believe that this is much more complicated to do – clearly. So what you have is a diagonally mounted one-minute tourbillon (makes a complete revolution each minute) inside of a four minute tourbillon. this does not take up as much area as you would think. The outer tourbillon has sapphire hands that stick out of it that go along a scale as the bottom of the watch. They are used for tracking the four minute rotation time of the tourbillon. So that you don’t need to look at the little inner tourbillon, the watch has a separate seconds subsidiary dial located close to 9 o’clock.

Located at three o’clock is a power reserve indicator. The manually would movement hold up to 120 hours of power. That is a lot, and it is spread out through 4 mainspring barrels that are all stacked on top of one another. It looks like a large cylinder on the dial and can’t be missed at between 10 and 11 o’clock on the dial. The whole thing spins when you wind the watch. There is constant movement going on the dial at all times. That mixed with the very high-grade finishing and polishing of the movement pieces makes it all very nice to constantly look at. You can also be sure that unlike some larger watches, the Double Tourbillon is very comfy to wear. Very ergonomic in design, with a well fitting padded black alligator strap. The deployment clasp is pretty neat as well. I like it when smaller indy watch makers take into consideration these elements of a watch as well.

If you have the money for a watch like this, there are very few other timepieces that will regale you as often, seeming to suggest “the price was totally worth it.” You can probably notice in the images the nice polish on the bridge edges, the different colors and finishes on the metals, and of course the thoughtful use of red color for all the information parts of the movement (aside from the main hands of course). Even the blackened back plate of the movement helps to significantly bring all the details out. It is masterful piece of mechanical art, and it happens to also tell the time. Plus, it is done in such a manner than you might never even notice that it is art at all, being so draped in a blanket of technicality. I really do appreciate this watch and will continue to meet with Greubel Forsey just to wear their watches as I won’t ever be able to afford them.