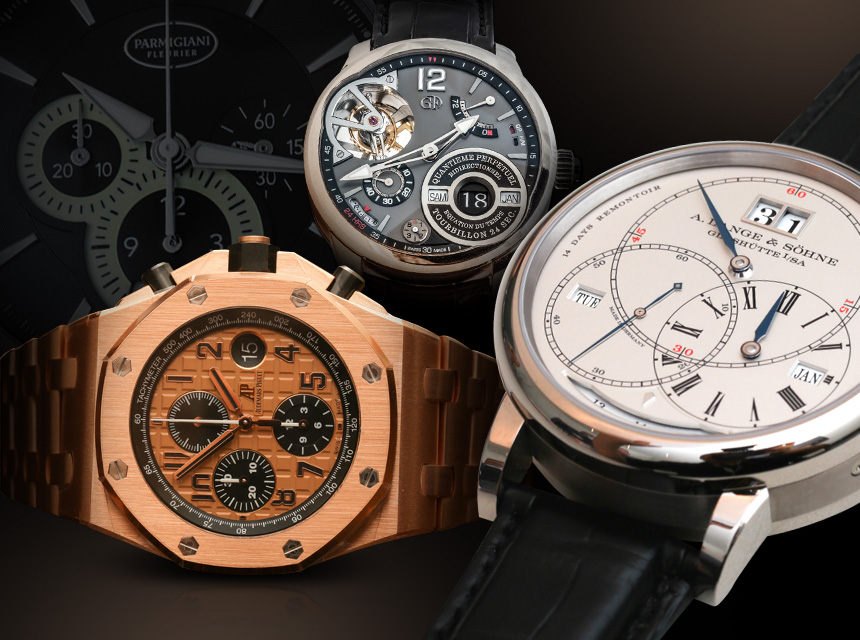 The aBlogtoWatch team has just returned from the 2014 edition of the Salon International de la Haute Horlogerie watch trade show in Geneva – otherwise known as the SIHH. If you aren’t already aware of what this show is about; it is one of a few major watch trade events each year where new products are debuted. SIHH is operated by the Richemont Group and a few other participating brands. There are about 16 brands that show there. The other major Swiss watch trade show is Baselworld that happens later in the year around March – and a lot more brands present there. SIHH is an important event and helps us understand what some of the major luxury brands are doing, and what their focus will be for this year and beyond.

While we saw and photographed many new and amazing watches, there are a few that stood out as the top timepieces. These are watches that left the biggest impression on us, or that we feel are going to be successful sellers this year and beyond. A list of all the best watches would easily take up more than 10 spaces, but here are some that you should certainly know about.

It is also important to discuss overall themes and trends at the show. My colleagues in the fashion world especially are keen to know this information so I will try to break it down. From a business standpoint the brands are very much focusing on replicating what is already working. Aside from a few noteworthy brands such as Jaeger-LeCoultre, Richard Mille, Greubel Forsey, and A. Lange & Sohne, there is very little in the range of outrageous timepieces this year meant to act as “media bait.” What does that mean? Well, I used the term “media bait” to refer to wildly designed or priced timepieces meant to attract media and consumer attention. They are highly engineered and low production, often focusing on interesting movements and bold presentations. It used to be that most all brands had a few of these almost “concept style” watches each year that offered a lot of talking points and helped show what the brand was all about. This was likely a tactic taken from the automotive world, which also has ceased as much focus on concept vehicles.

Instead, brands continue to consolidate their collections and gradually release models as line extensions or updates to existing pieces. These timepieces focus on maximum “retail-ability” but aren’t always the most exciting for brand voyeurs. Nevertheless, there is plenty to discuss based on what we saw at SIHH 2014, and over the next few months aBlogtoWatch will gradually present you with a number of hands-on looks at the most interesting and beautiful watches of the show.

Before discussing our top 10 most interesting watches from SIHH 2014, I’d like to note that the existence of the new Hong Kong-based show called “Watches & Wonders” is forcing brands to split their new releases between two shows. Watches & Wonders debuted in 2013 and is another Richemont-produced trade show meant to focus on the Asian markets. Brands have indicated that they are going to share new releases between SIHH and Watch & Wonders (that will happen again 2014 in September) – so that is important to know.

Myself, and aBlogtoWatch Editor, James Lamdin, who also attended SIHH 2014, will each share five of our top timepieces from the show. These are our top watches of the show in no particular order. You can see the article we wrote about a watch by clicking on the titles: 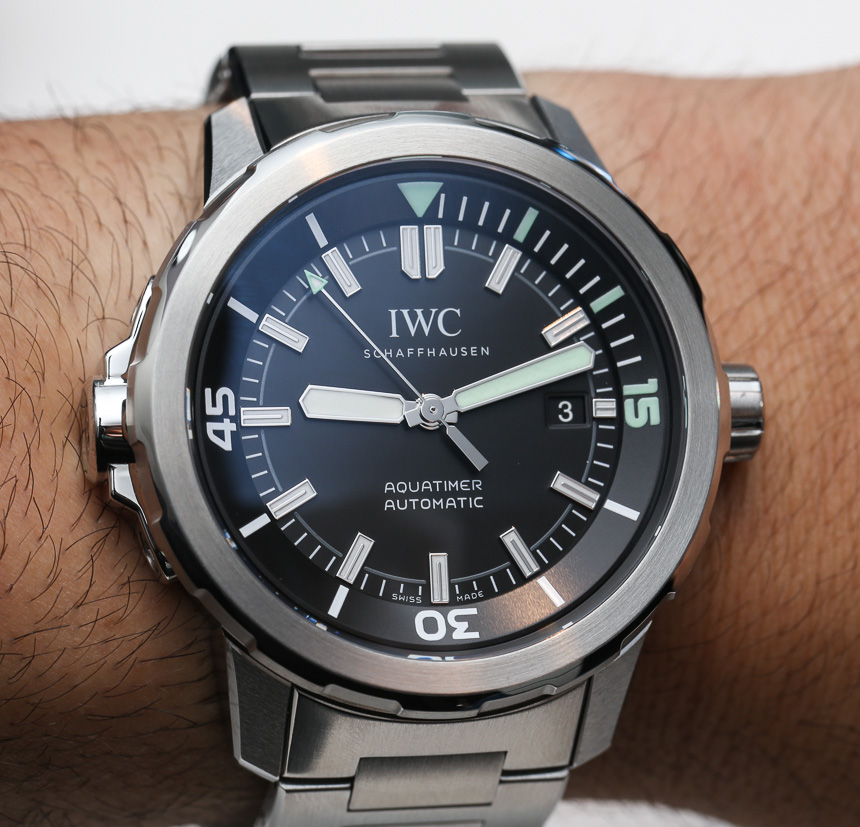 For 2014, IWC revamped and re-launched an entire new collection of their historically significant Aquatimer diving watch line. A perennial favorite amongst IWC collectors and dive watch enthusiasts in general, no one would argue that the current collection is getting a little long in the tooth (available since 2009), and was primed and ready for a major overhaul. The new collection spans the range from the “base” 42mm Aquatimer Automatic Diver to the Deep Three and Perpetual Calendar Digital Date Month highest-end models. The Aquatimer for 2014 also includes a new collection of chronographs, as well as the requisite Galapagos and Cousteau Limited Editions.

The whole lot is spectacular, but the “base” model automatic version gets the nod for the best in show. With a nod to historical models, the sensibly sized diver gets treated to a new steel bezel with an internally rotating dive calculation ring, which is also now operable by rotating the bezel in both directions – IWC calls it “Safe Dive.” Also improved over the previous generation is the strap system, which now has a quick release system that is much more appropriately suited for changing straps. My biggest complaint on the last generation was how poorly it wore on dry land. With the revised lugs and strap removal system, this is no longer an issue.

There is little doubt that this new generation of Aquatimers will be tremendously successful for IWC, and for good reason. And this, the most simple and straightforward of the collection, is a hands-down winner. Priced from $5,750~James Lamdin 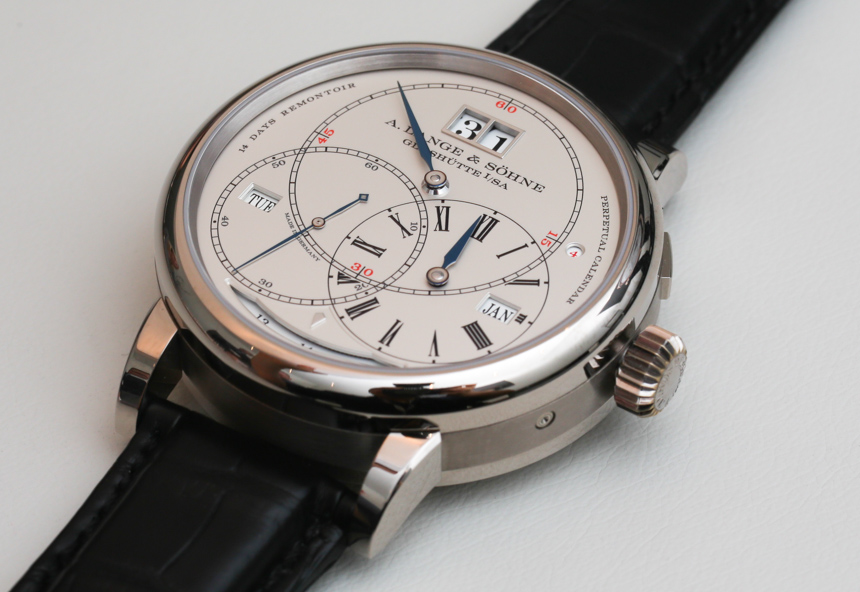 A. Lange & Söhne continues to blow minds and break hearts with each passing year, and their big reveal for SIHH 2014 was no exception – the Richard Lange Perpetual Calendar Terraluna, their latest highly complicated timepiece, which may very well have been the most talked about watch of the show.

Housed in a relatively austere 45.5mm case, and available in white or pink gold, the Terraluna features a perpetual calendar complication with day, date, and month displays, regulator-style time display with three separate hands registering hours, minutes, and seconds, leap year display, power reserve readout, and to top it all off? An orbital moonphase display is part of the movement, and is visible through the case back. The movement itself features a constant force escapement, and has a 14-day power reserve. In short, another masterpiece from Lange… let’s hope they never stop coming.

Although not technically a limited edition, the Terraluna will see very limited production, and is priced around $230,000. ~James Lamdin 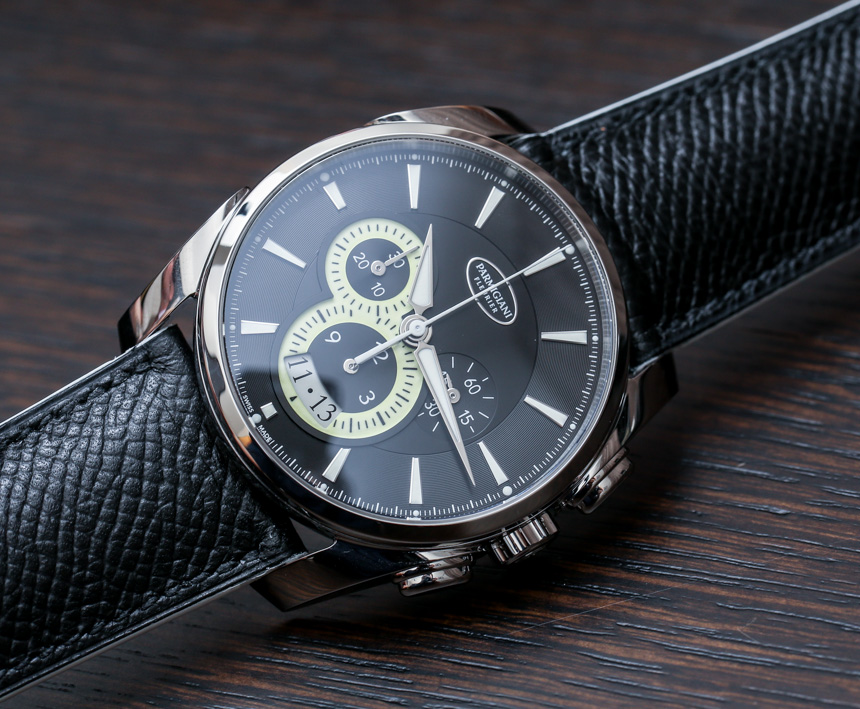 Something new from Parmigiani for 2014 was their “Metro” collection of timepieces. Parmigiani’s language about the collection may be a bit lofty, but under the branding is what we feel is the most desirable basic Parmigiani chronograph we’ve seen to-date. What you need to know about Parmigiani is that they make so much of their watches in-house – including the cases, dials, and of course, the movement. The Metrographe is a perfect example of how one can combine all the strengths of the brand in a reasonably priced package.

What is more important, is that this is the first men’s watch (not intensely priced) from the brand that we’ve been really excited about. Let’s face it, Parmigiani makes a lovely looking timepiece but they often have a bit of a feminine twist. More recently, we’ve seen new models that still faithfully incorporate brand DNA in a package that we want to wear more casually. The Tonda Metrographe comes in a 40mm wide steel case that wears large due to the lugs, and has a few available dial colors. In black, the chronograph sub dials are framed entirely in SuperLumiNova (because they really want you to time things in the dark).

Inside the watch, is an in-house made caliber PF315 automatic chronograph movement – and we like how the pushers integrate with the large lug structures. A combination of legibility, utility, and sheer refinement from a prestigious brand makes the Metrographe collection rather desirable this year. ~Ariel Adams 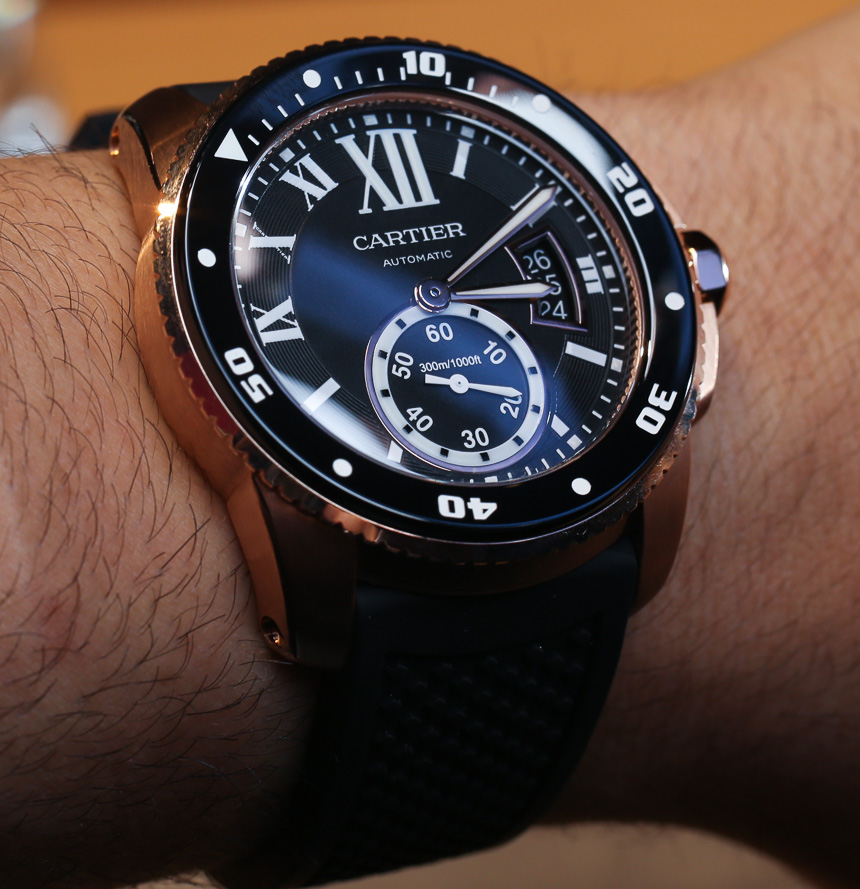 When we wrote our hands-on post about the Cartier Calibre Diver, we mentioned the clear irony of a Cartier watch meant for diving. When we think about Cartier we tend to think about timeless watches on stately ladies, classic men’s dress watches, and certainly not tools for underwater sport. Nevertheless, Cartier took their newer Calibre collection timepiece and turned it into a legit ISO certified 300 meter diving watch. While it sounds odd on paper, we love the resulting product.

At 42mm wide the Calibre Diver is available in a steel, two-tone, or full 18k rose gold case. Thankfully, no diamond-decorated models are available (yet). The case has a rotating diver’s bezel that uses a durable DLC black coating which gives it just a little bit of “Cartier shine.” Cartier didn’t do much to the dial of the Diver over the normal Calibre – but the lines are a bit bolder.

Is there room in your collection for a refined dive watch that whispers in your ear with a Cousteau-like French accent? Maybe. If you find yourself split between wanting to show a little status but also wanting to stay causal with a sport watch, the Calibre Diver is a particularly satisfying addition to a range of high-end dive watches with in-house made movements such as the Rolex Submariner and Blancpain 50 Fathoms. Priced starting from $8,200. ~Ariel Adams