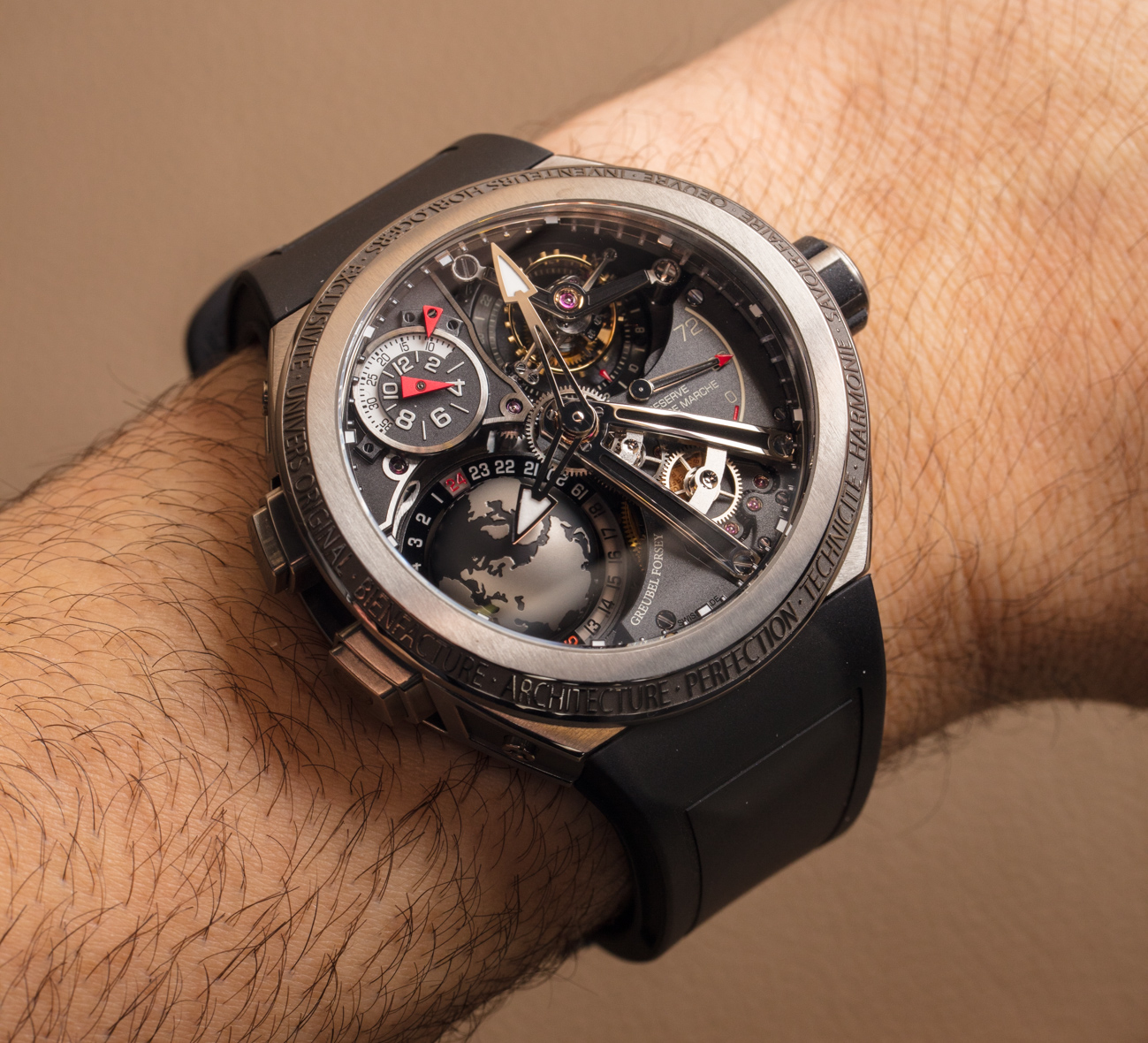 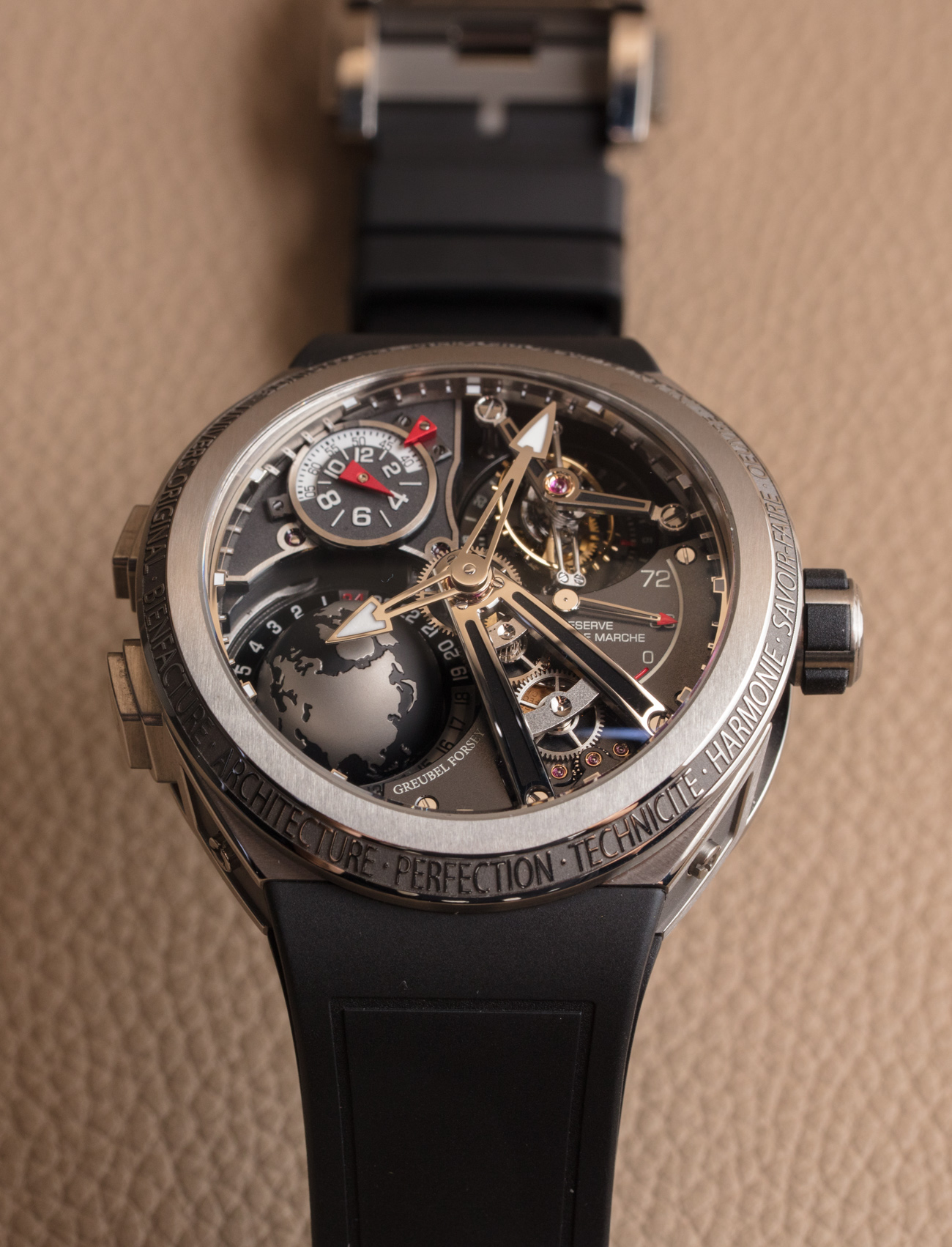 “It’s not really a sport watch,” says Greubel Forsey co-founder Stephen Forsey as he shared a sneak preview of the lovely new Greubel Forsey GMT Sport timepiece with me. “It does have ‘Sport’ in the name,” I commented… Indeed, the half-million-dollar super-luxury watch is not intended for vigorous sport activities but, apparently, if you are very wealthy on land you also need to be very wealthy underwater. High-end watches are addictive, so it makes sense that the wearer of a fine timepiece also wants to be able to go swimming with it. Whether or not this logic applies to you, it is the stated reason  Greubel Forsey decided to make yet another watch for short sleeves, and one that you can take into the pool.

Water resistant to 100 meters, and with a brand new style of titanium case, the Greubel Forsey GMT Sport is the answer to an even more comfortable daily wear. One can’t help but feel that, while the GMT Sport isn’t visually similar to a Richard Mille watch, it is certainly a response to consumers who want to wear one of the most finely finished timepieces in a more casual setting. Let’s take a look at what else makes the GMT Sport an interesting new piece of horology. 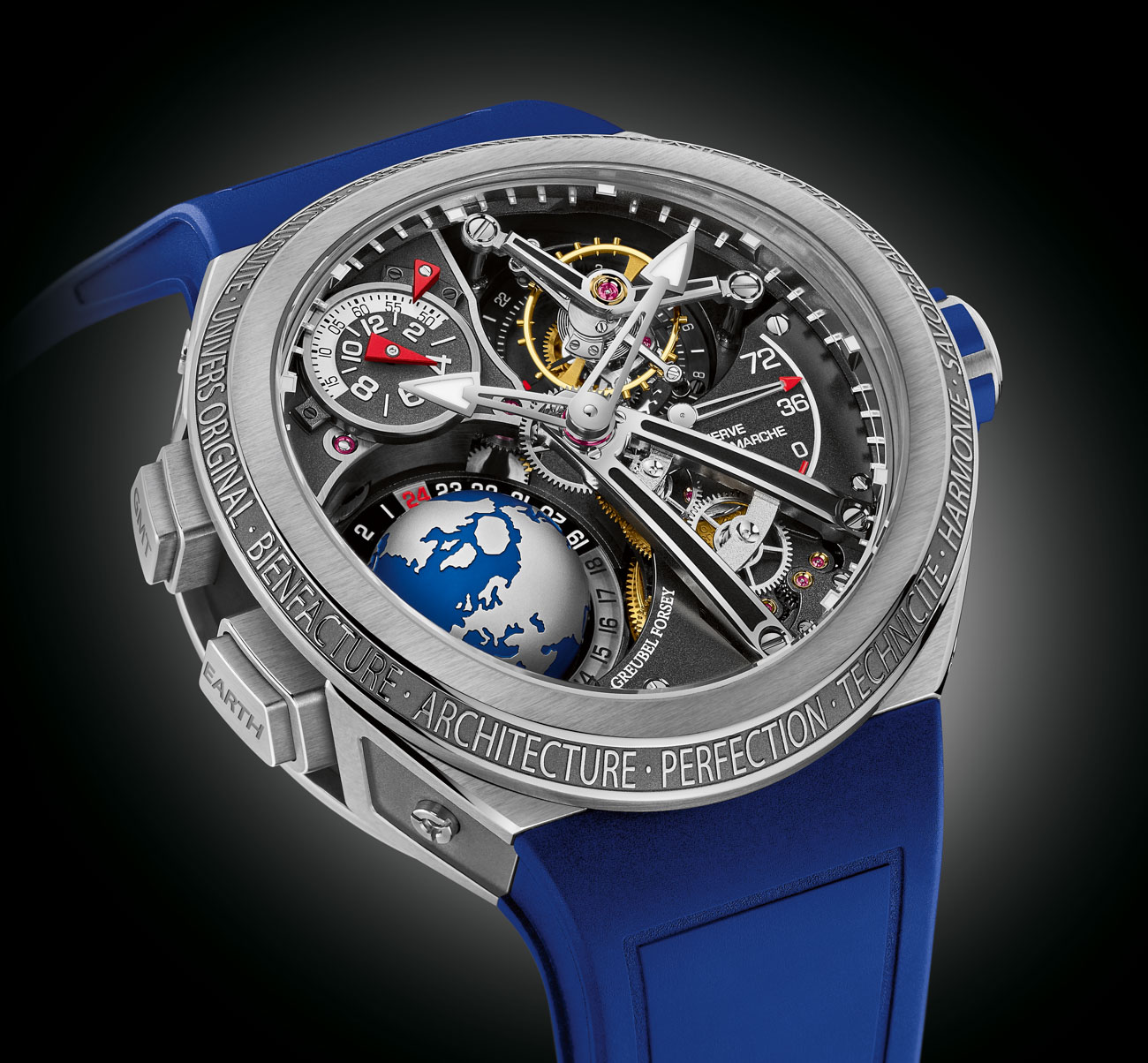 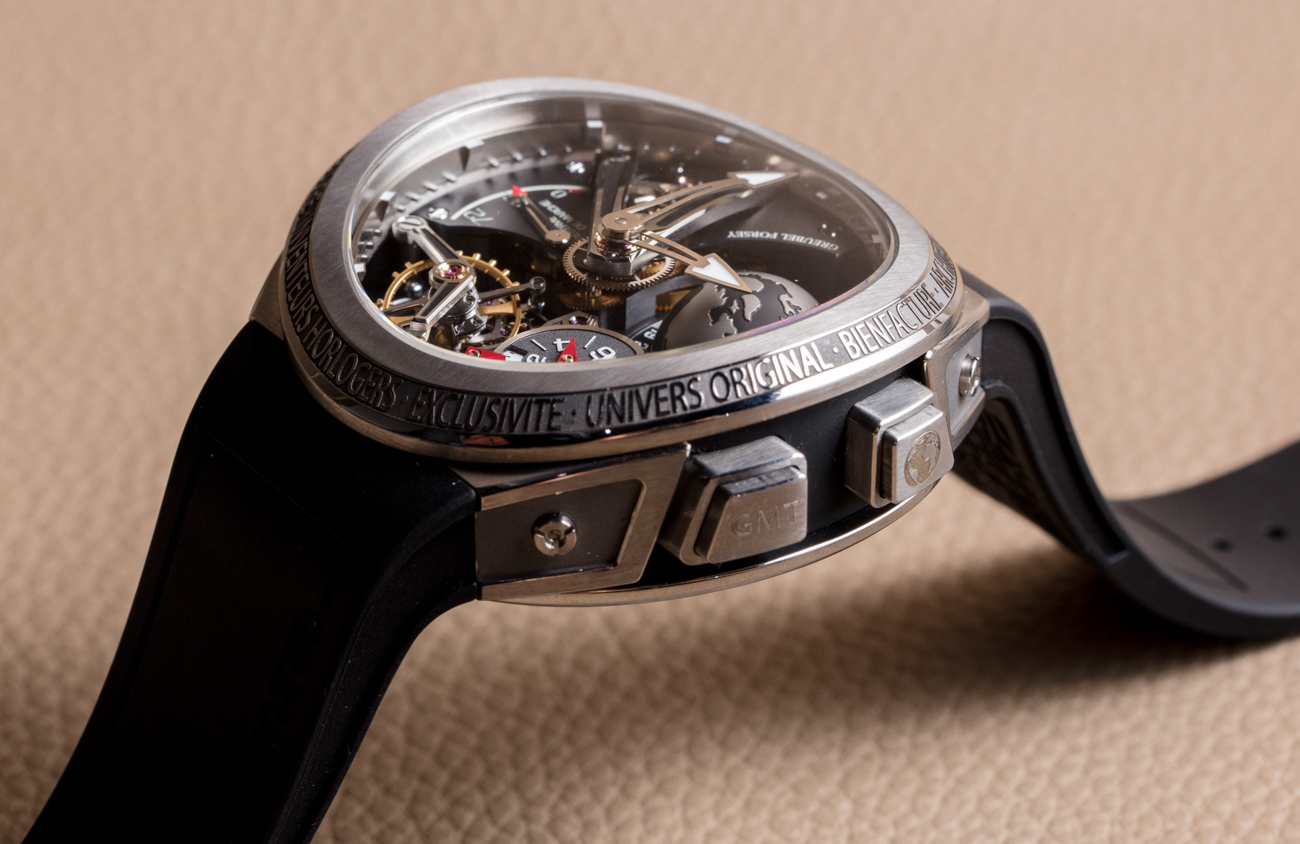 What I personally find most interesting about the GMT Sport is the way the bezel and sapphire crystal were designed. Look at the timepiece heads-on from above, and it appears more or less like a round case. When you start to view the GMT Sport from the side, you notice how the bezel and crystal are shaped a bit like a warped potato chip. Greubel Forsey does a great job with anti-reflective coating, which ensures that glare doesn’t obstruct the view of the movement/dial when looking at the watch from most angles.

I also predict that the watch enthusiast community will have plenty of fun jesting at the text around the bezel. Lines of “special message” text on watch cases or movements aren’t new to the brand, but this is a novel execution of the concept with the lettering on the bezel — though, in reality, the text is actually more decorative than it is informative. The case itself is lightweight and very wearable at 45mm-wide and 15.7mm-thick. As I said above, it has a water resistance rating of 100 meters. 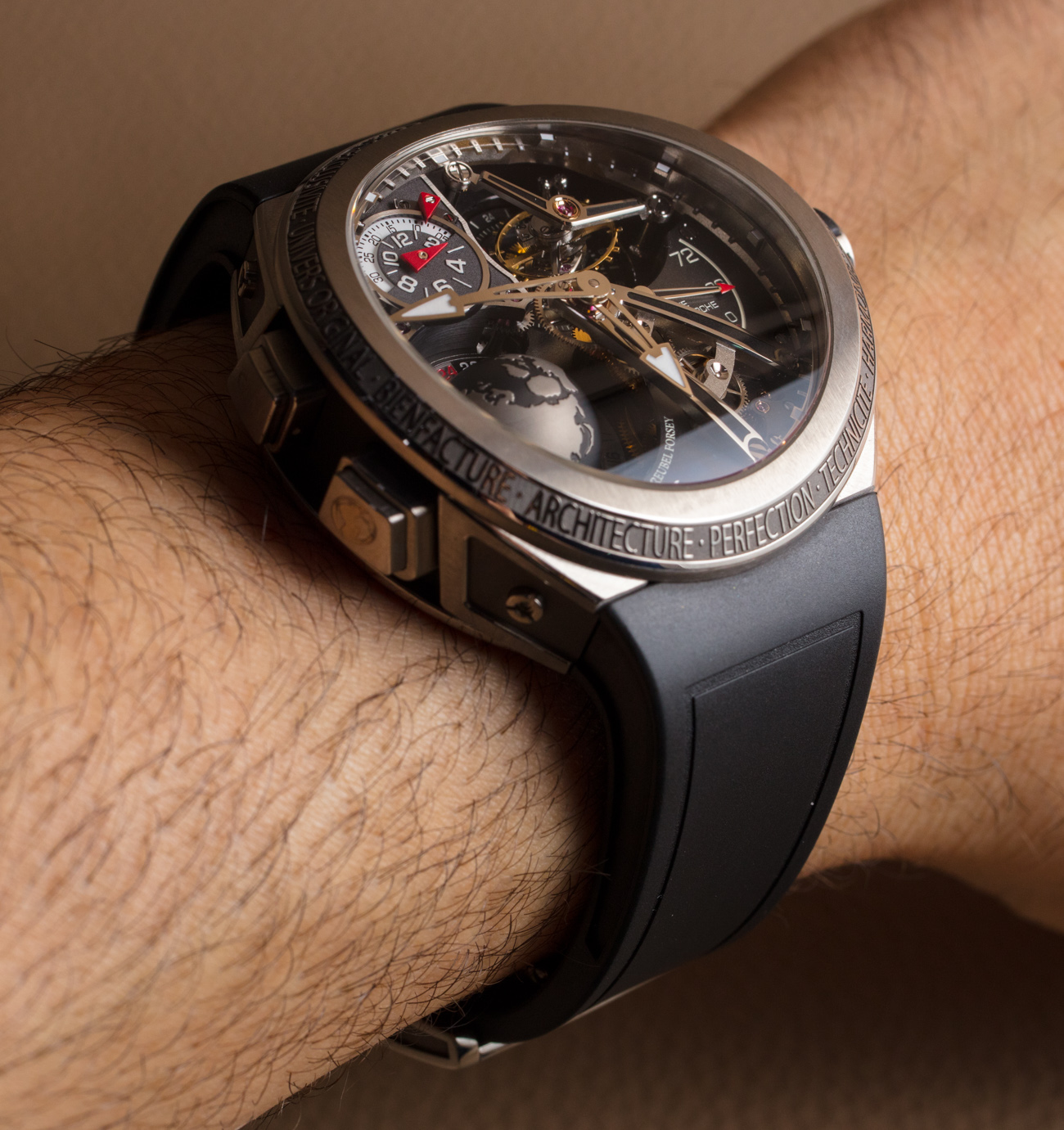 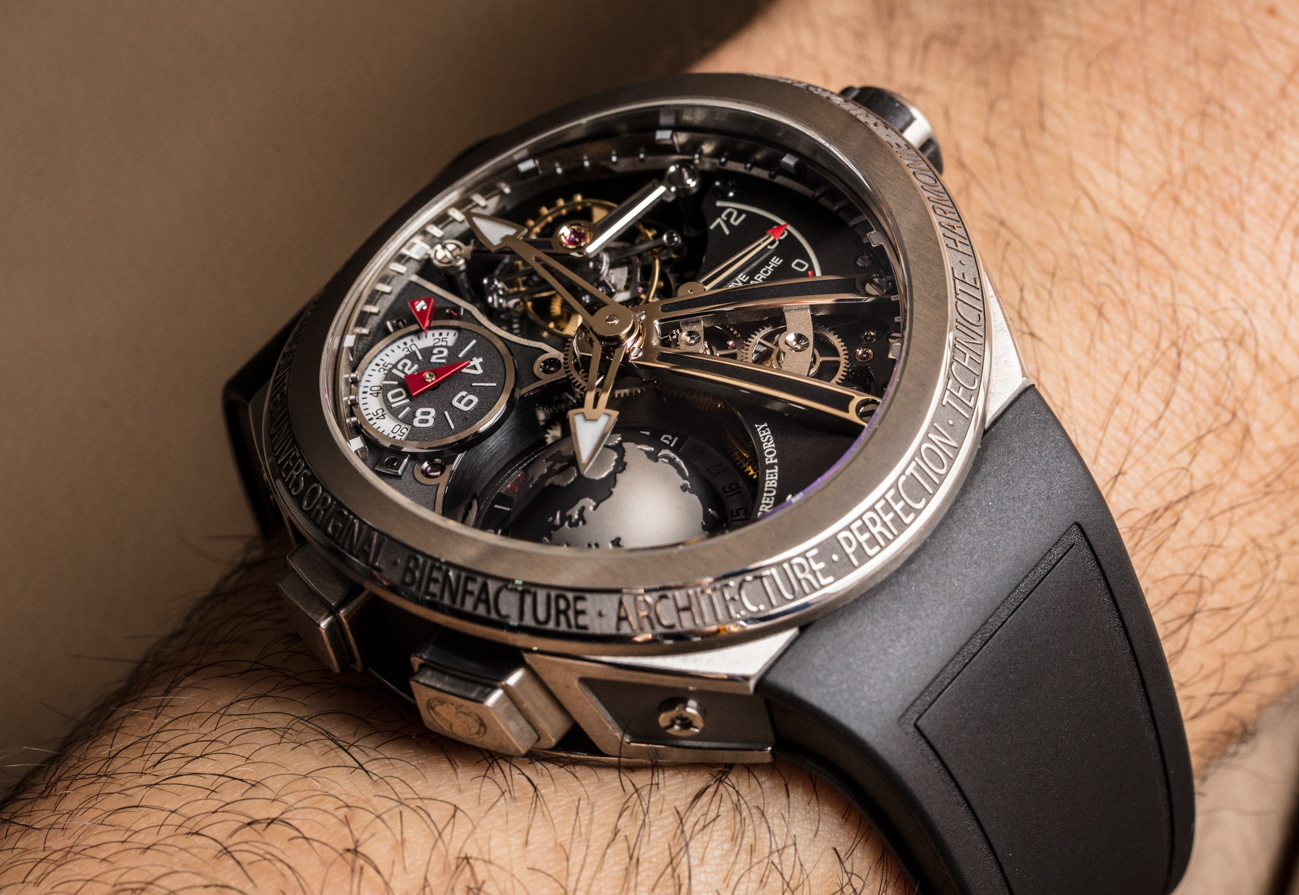 Inside the GMT Sport is a new version of an existing movement: the Greubel Forsey GMT tourbillon. The movement includes a tourbillon mounted at a 25-degree inclined angle (that rotates once each 24 seconds), along with the time, power-reserve indicator, day/night (AM/PM) indicator, and a GMT indicator. That latter function uses a half-globe on the dial, which elegantly turns over the course of the day, as well as a 12-hour indicator and a moving disc on the rear of the case. As you can see, the debut version of the GMT Sport will have a “black globe,” while subsequent first models of the GMT Sport will have a more traditional blue globe. The black globe models will be produced as a very limited set (something like five or 10 pieces, if I recall correctly).

The GMT Sport movement is ornately assembled with Greubel Forsey’s traditional focus on detailing and perfection. The movement merges with the dial, as there is no real distinction between the two. High praise for the GMT Sport’s legibility, as it uses traditional centrally mounted hour and minute hands. The movement is comprised of 435 parts with the regulation system inside of the tourbillon operating at a frequency of 3Hz. The movement has a total of 72 hours of power reserve, as well as handy pushers to adjust the various functions of GMT/second time zone system. 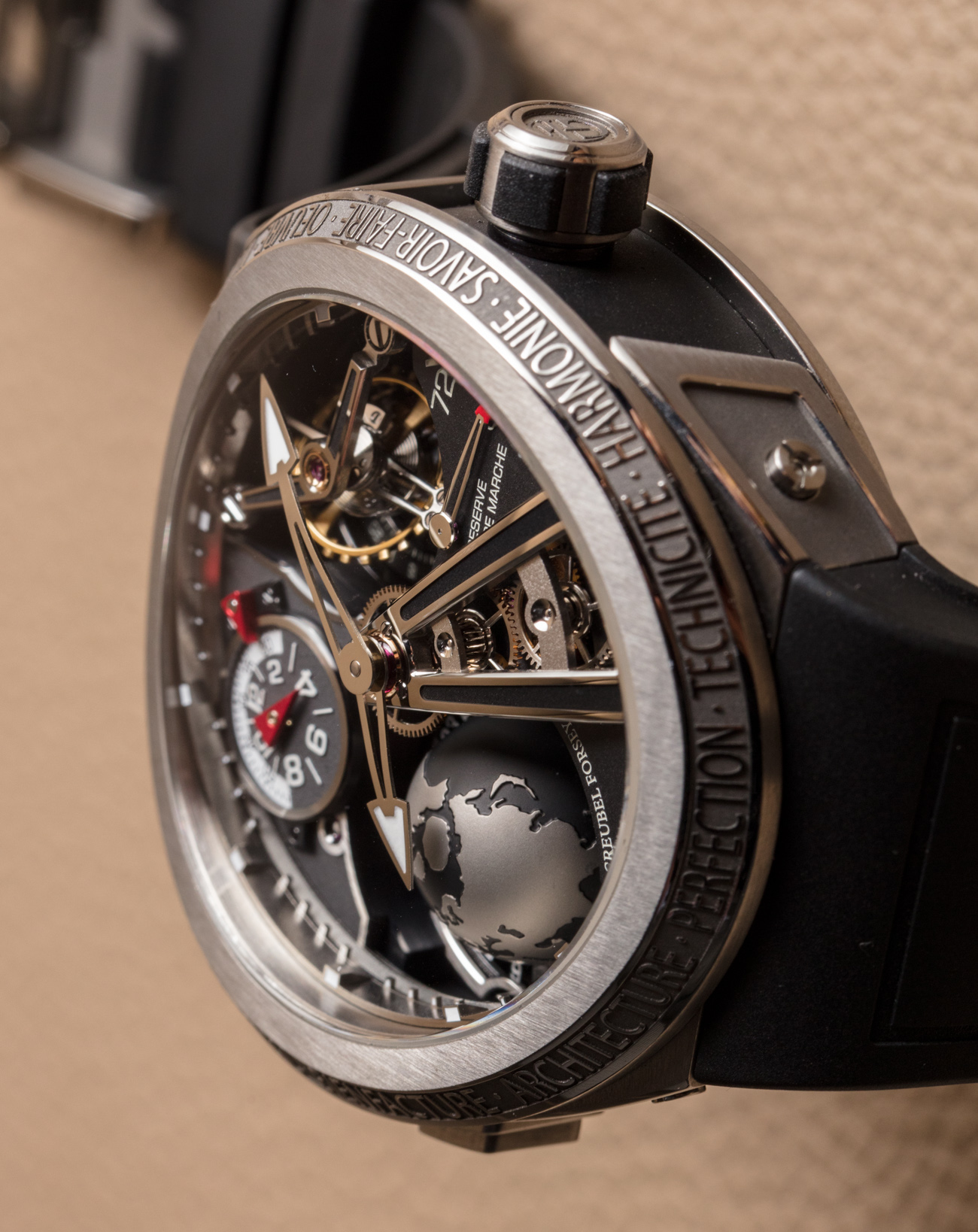 That means in addition to this being a watch for swimming, the GMT Sport is an ideal travel watches – or at the least for those people who are interested in knowing the time in various time zones at once. Referencing the rear of the case helps calculate the time around the world, and the unique system of having both a 12 hour and 24 hour indicator for secondary time zones makes the dial display uniquely flexible for a variety of use case scenarios. The sapphire crystal disc for the time zones on the rear of the watch “seal the deal” making this timepiece truly about calculating multiple time zones (Greubel Forsey style that is).

On the wrist, the Greubel Forsey GMT Sport is remarkably comfortable — and this is not a surprise from the brand that routinely makes comfortable watches (despite many of their watches having highly original case shapes). On the custom rubber strap (which was designed to look as though it is integrated into the case), that GMT Sport has a wrist presence unlike other Greubel Forsey watches. Though it is tall on the wrist, I do think that, for the right type of person, this timepiece could be a daily wear. 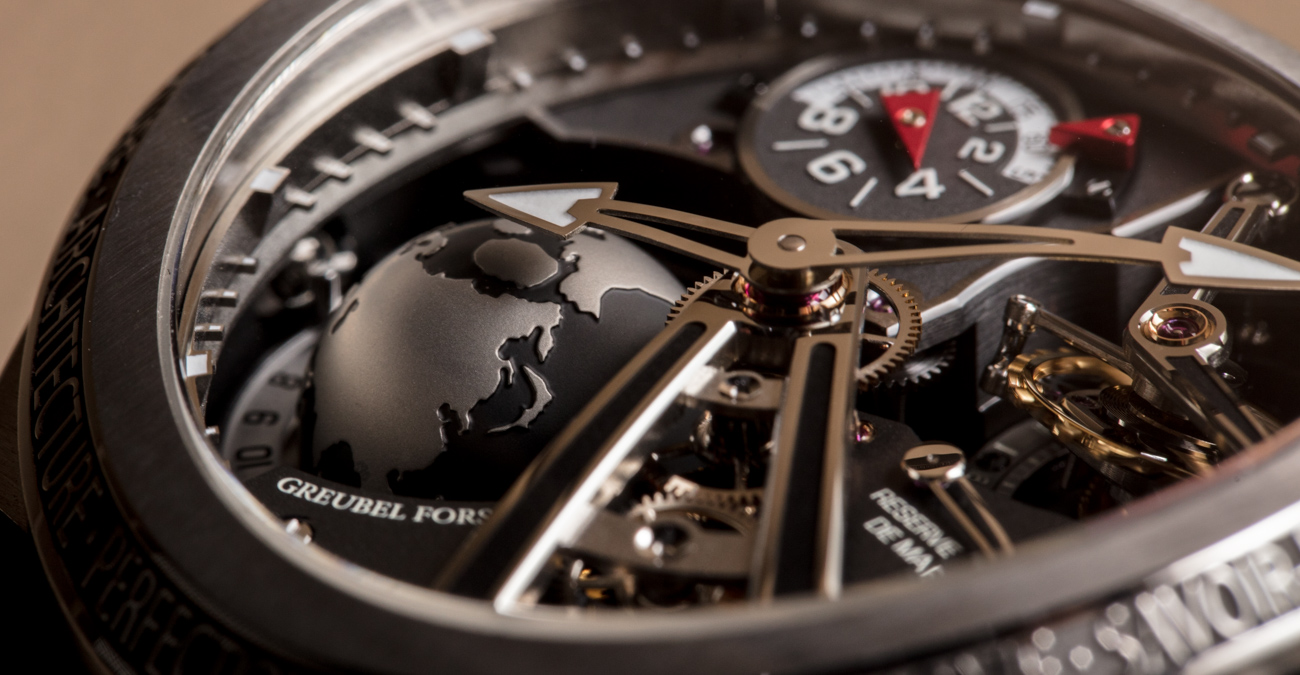 Future versions of the GMT Sport might be able to make the piece even more comfortable as a daily wear wristwatch. Of specific concern to me is the titanium material, as it is known to scratch, and people who love the details of a Greubel Forsey no doubt hate things like nicks and scratches.Certainly, fans of the brand will ask for an all-black version of the GMT Sport — which Greubel Forsey can coat with a scratch-resistant material such as DLC.

Elegantly sporty, and eminently luxurious, the Greubel Forsey GMT Sport might not be the most innovative watch produced by the Swiss brand, but it is a definite crowd-pleaser. In addition to the highly limited black globe model, the blue globe version of the GMT Sport in titanium will be limited to just 11 pieces. Price for each is 480,000 Swiss Francs. Learn more at the Greubel Forsey website here.