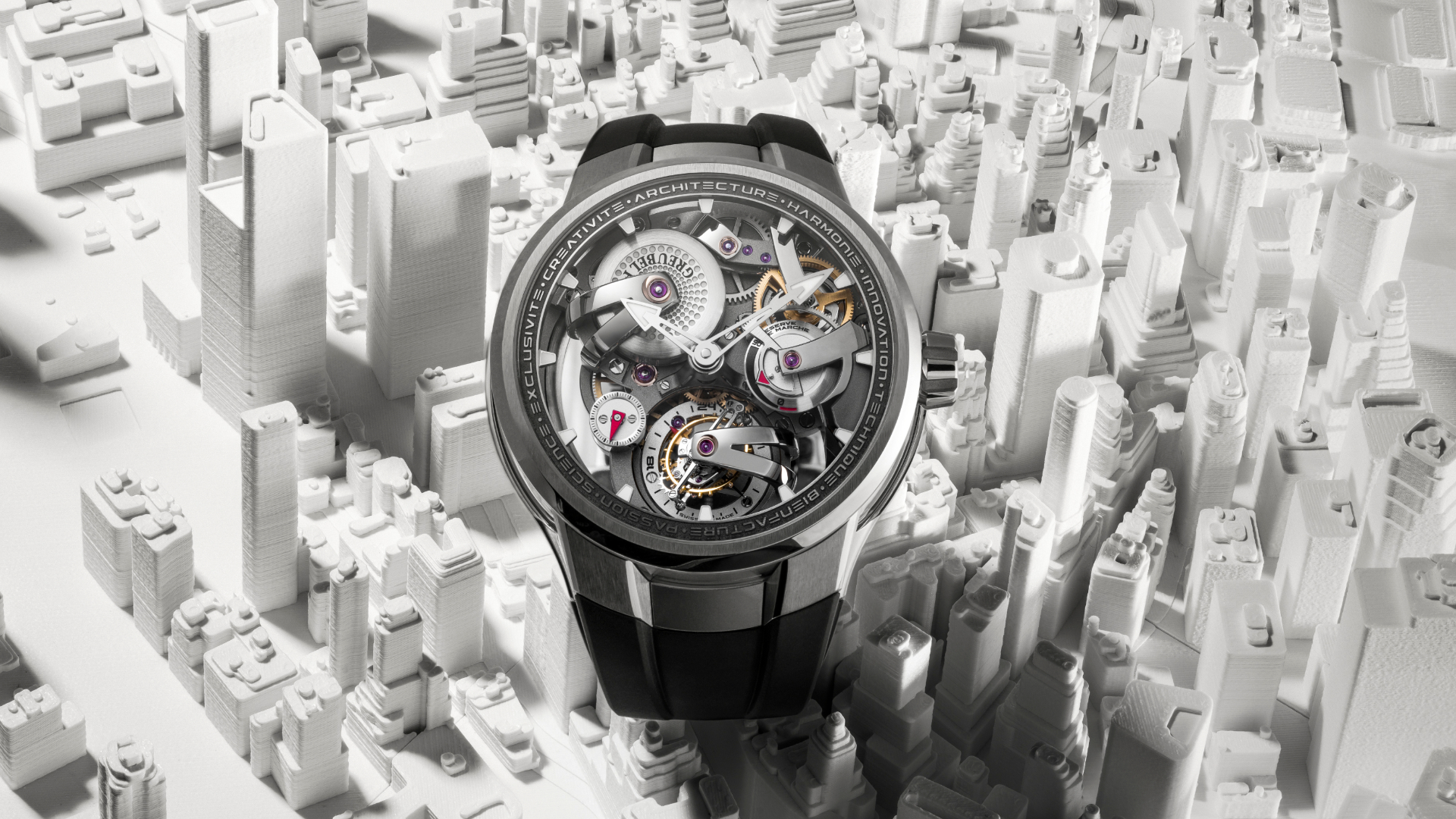 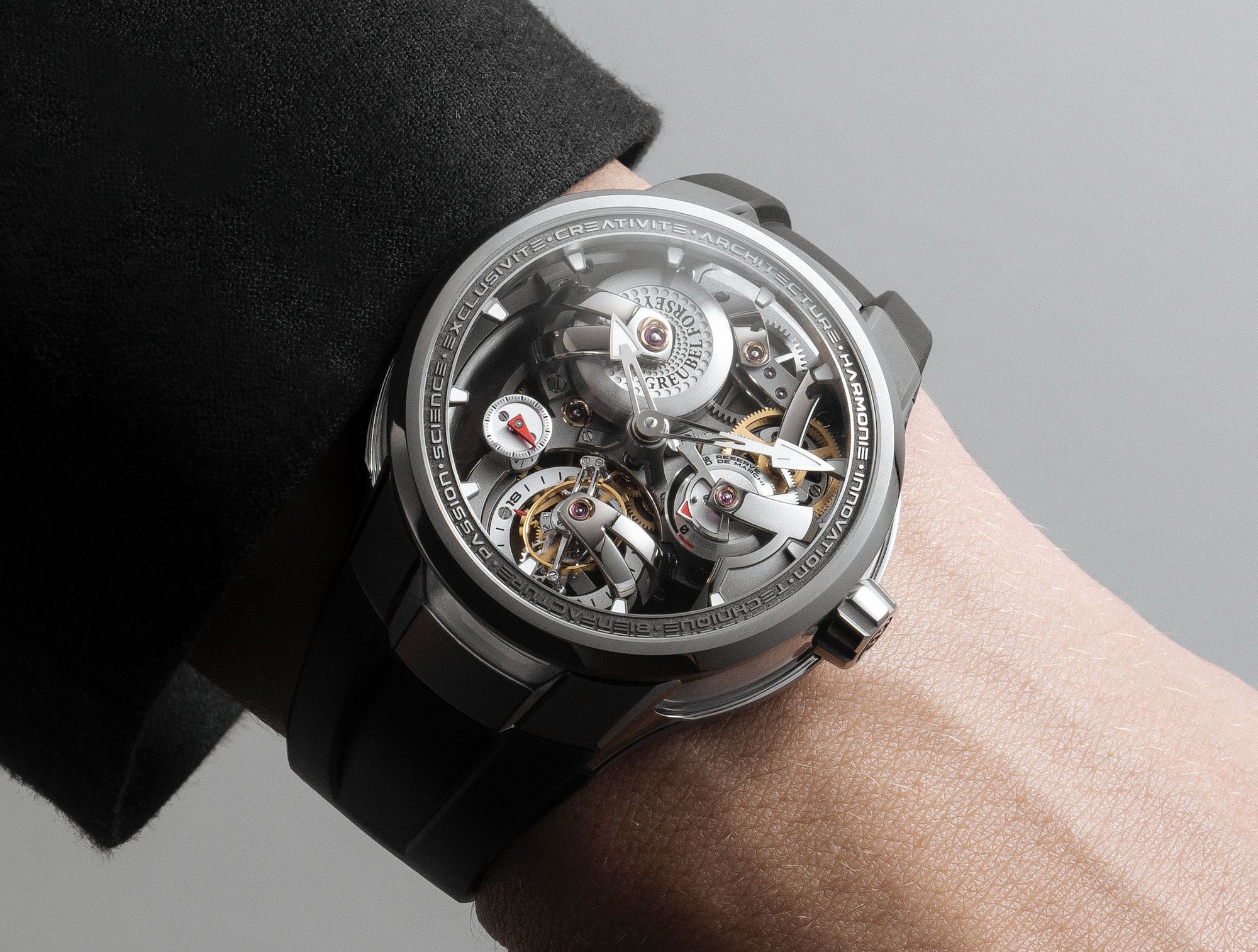 Simply put, Greubel Forsey does not make traditional watches. Everything about the timepieces it produces, from cases to movements, is unlike anything you will see from any other manufacturer. There is a certain three-dimensional quality that exists within nearly all of Greubel Forsey’s works that integrates components of the movement into the core designs of their respective models, rather than treating the caliber as a separate entity and placing it inside a case and hidden away behind a dial. With that in mind, Greubel Forsey’s latest creation is known as the Tourbillon 24 Secondes Architecture, and it takes the brand’s signature three-dimensional design philosophy to an entirely new level. 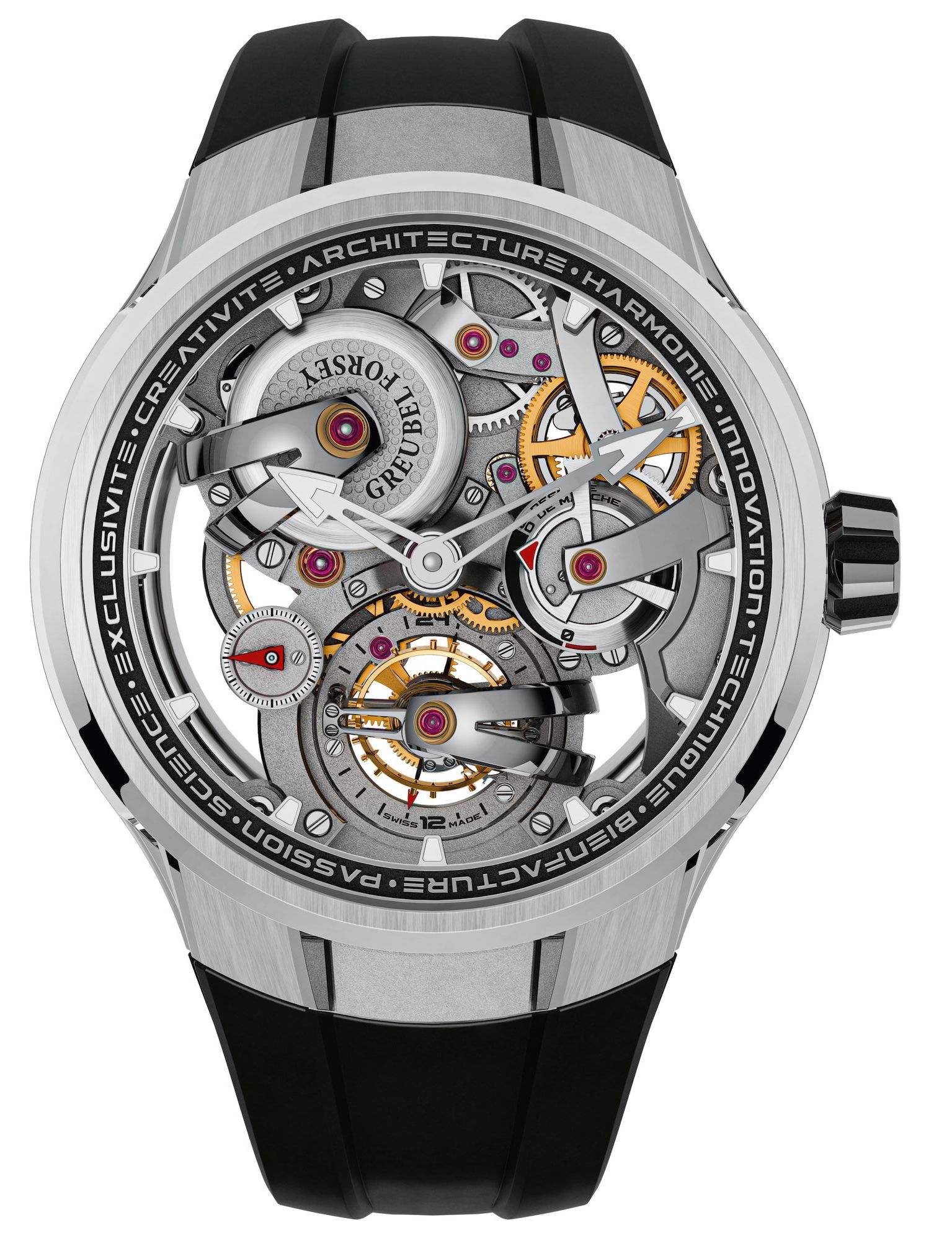 Crafted from titanium, the case of the Greubel Forsey Tourbillon 24 Secondes Architecture follows what the brand calls a “convex conical frustum case shape” that has a smaller diameter at the bezel than at its base. While the caseback has a diameter of 47.05mm, the conical shape of the case tapers to 45.5mm at the bezel, while measuring a total of 16.8mm-thick. In addition to sapphire crystals covering the dial and the caseback of the watch, the Greubel Forsey Tourbillon 24 Secondes Architecture also features a curved sapphire crystal that stretches around the entire periphery of the caseband for a completely unobstructed view of the movement. In addition to showcasing the three-dimensional structure of the movement in the most complete way possible, the large sapphire apertures also allow light to enter the case from every angle in order to highlight the movement’s architecture with a dynamic display of shadows and reflections, while still offering users a respectable 50 meters of water resistance. 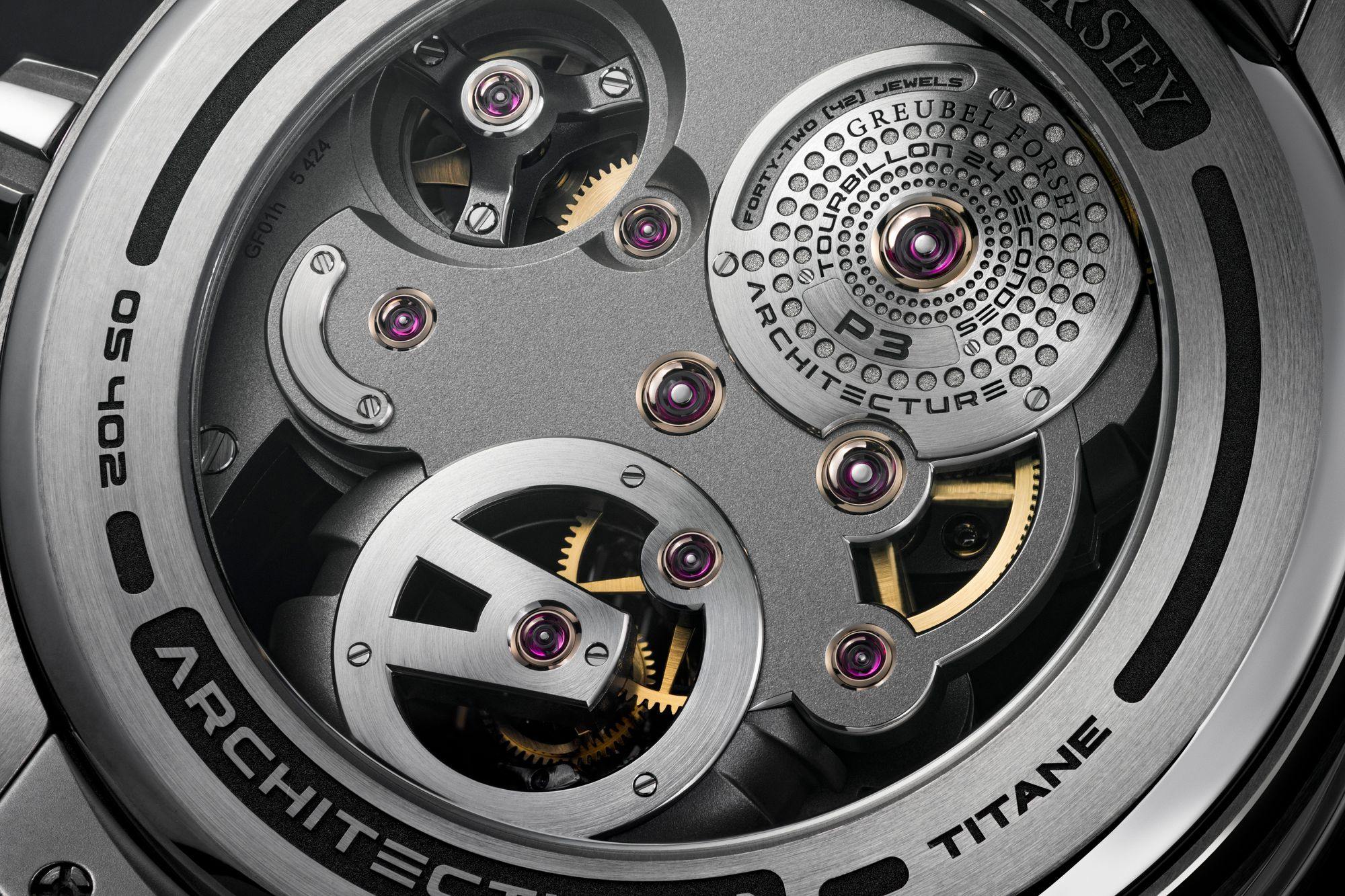 Like other Greubel Forsey watches, the “dial” of the Tourbillon 24 Secondes Architecture is not so much a dial, in the traditional sense of the word, as it is a showcase of the watch’s expertly finished components, with a pair of hands mounted amidst them to indicate the time. Surrounding the opening on the dial side is a rehaut that is relief-engraved with the Greubel Forsey set of values that inspired this creation: Architecture, Harmonie, Innovation, Technique, Bienfacture, Passion, Science, Exclusivité, Créativité. Meanwhile, a large spherical and open-worked bridge holding the 25° inclined tourbillon sits at the 6 o’clock location. The barrel bridge resides at 10 o’clock, sculpted with polished spherical surfaces, and holds the engraved, lacquered, and circular-grained barrel cover. The power reserve is indicated by a red triangle that moves over a conical disk located at 3 o’clock, while the time itself is displayed by two centrally mounted open-worked steel hands for the hours and minutes, along with a cylindrical small seconds display that sits at the 8 o’clock location. 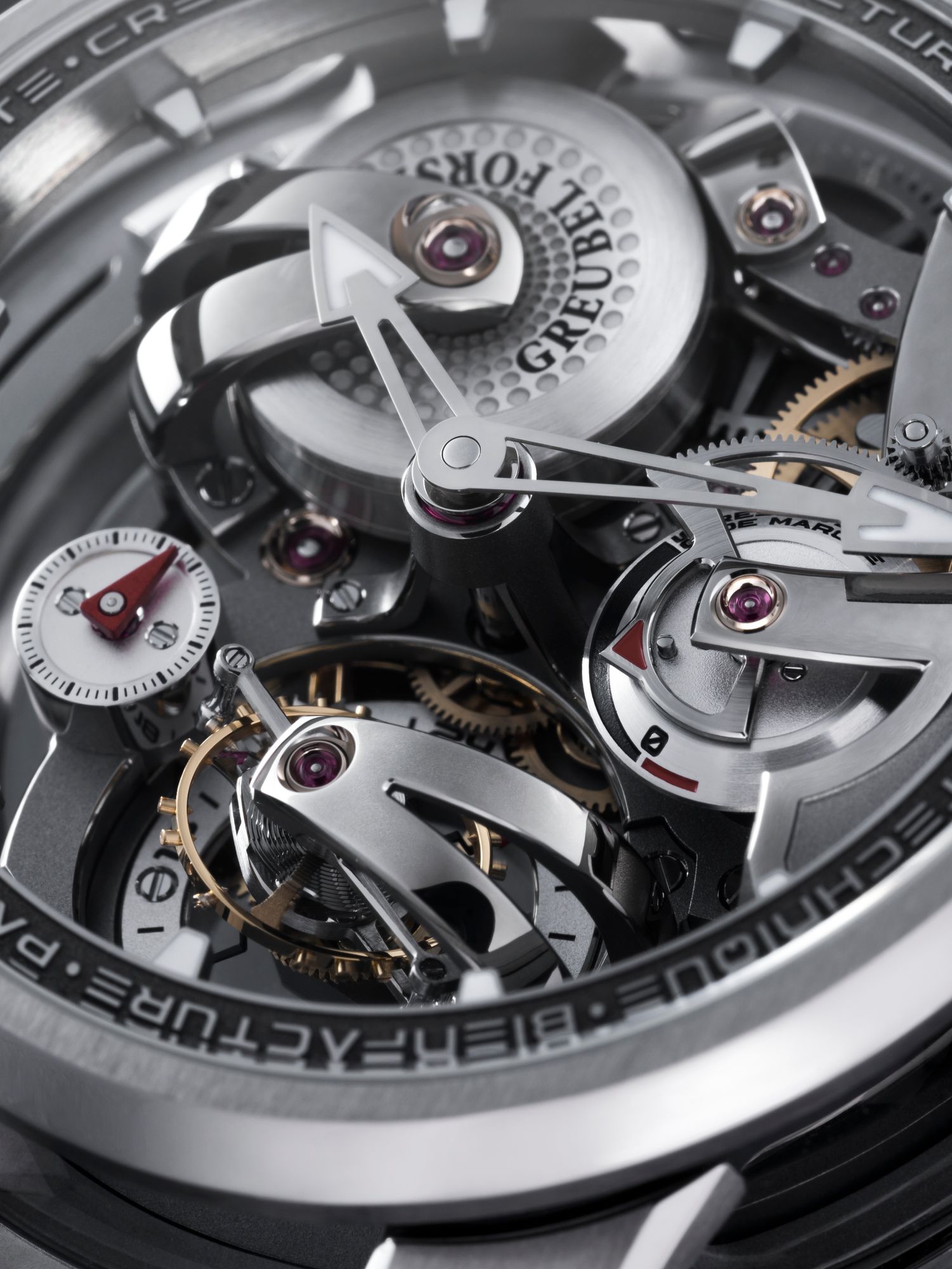 Like nearly all of Greubel Forsey’s creations, the immaculately finished movement is treated as an integral part of the watch itself, both in terms of its aesthetics and actual design. While the intricate case of the Greubel Forsey Tourbillon 24 Secondes Architecture is incredibly impressive in its own right, the sole purpose of its unique construction is to showcase the watch’s incredible 354-component movement, which serves as the true party piece of Greubel Forsey’s latest release. The polished titanium bridges stand out from the frosted finish on the mainplate, and they have been arranged in an organic manner that is intended to emulate the asymmetric but harmonious growth that occurs within the natural world. The hand-wound movement features three coaxial series-coupled barrels, one of which is equipped with a slipping spring to avoid excess tension, and these work together to provide the Greubel Forsey Tourbillon 24 Secondes Architecture with an ample 90-hour power reserve. Finally, completing the watch is an integrated black rubber strap that is fitted with a titanium fold-over clasp adorned with an engraved Greubel Forsey logo. 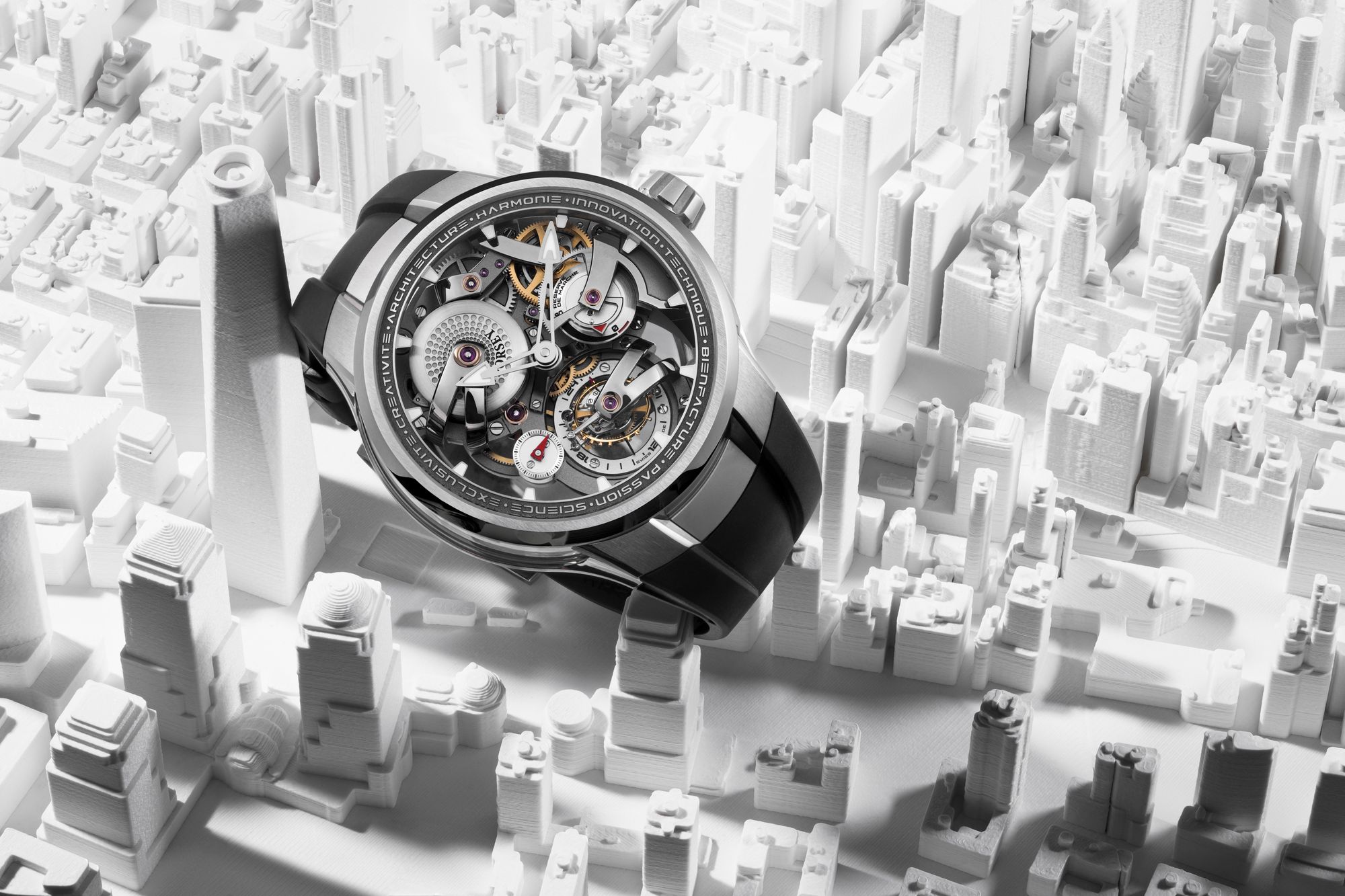 As a company that places its movements front and center within its watches, even the most simple and traditional of Greubel Forsey’s works can be considered highly architectural in their overall design and composition. The new Greubel Forsey Tourbillon 24 Secondes Architecture takes this aesthetic approach to an entirely new level to create an incredibly dynamic timepiece with an appearance that recalls the interrelated shapes, surfaces, and reflections of light that can be found within a dense metropolis. With an official retail price of $500,000 USD, production of the Greubel Forsey Tourbillon 24 Secondes Architecture will be limited to a total of 65 pieces, with 11 watches produced in 2022 and 18 examples produced each year thereafter between 2023 and 2025. For more information, please visit the brand’s website.