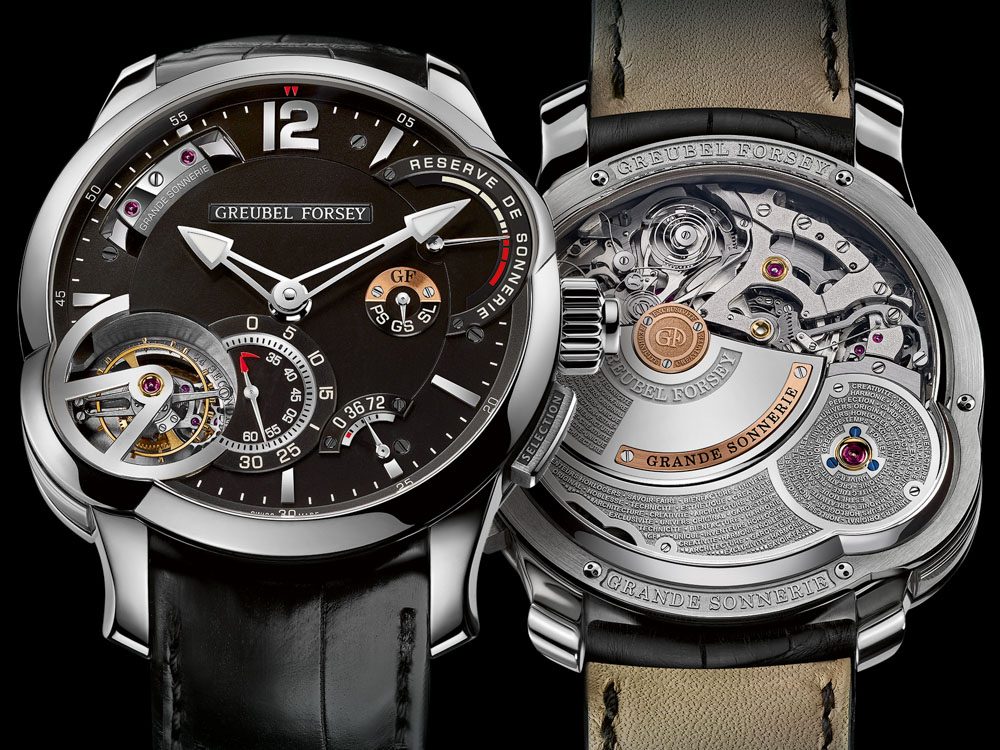 At SIHH 2017, ultra-high-end Swiss watchmaker Greubel Forsey will debut a timepiece that they reportedly spent 11 years “researching and developing.” It isn’t just a musical chiming watch, but also an automatic. Fans of the brand and other makers of high-end complications are sure to agree that the Greubel Forsey Grande Sonnerie watch is going to be epic.

Greubel Forsey has been taking it nice and easy when it comes to their developing and debuting of watches fitted with new complications. It was only three years ago that we saw them release their first watch with a perpetual calendar (hands-on here) and it is now, in 2017, that they debut their first ever chiming watch with the simply called Greubel Forsey Grande Sonnerie. 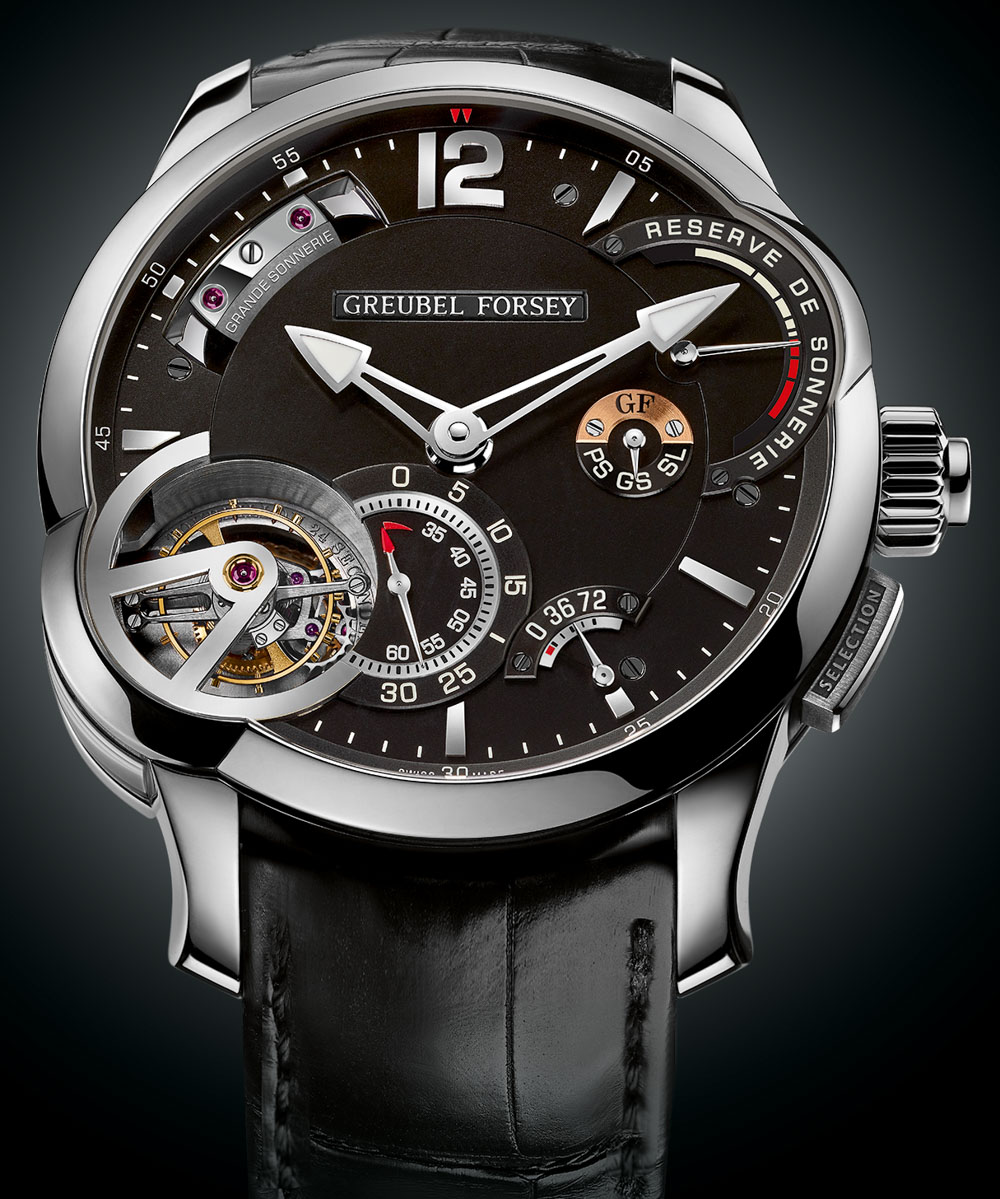 Ask any noteworthy watchmaker and they’ll tell you, movements with chiming complications are the most difficult to develop from scratch – closely followed by complex split-second chronographs. The grand sonnerie is, as its grandiose name implies, the most challenging of them all as it can chime in three different modes. In grande sonnerie mode the movement will chime every quarter and hour in passing (that means automatically), in petite sonnerie mode it will strike the hours in passing automatically and, last but not least, it also serves as a minute repeater like any other, meaning it can chime the hours, quarters and nearest minute on demand at any moment. It really is no wonder, then, that it took over a decade and 935 parts for Robert Greubel and Stephen Forsey to get to the point of finishing up their first sonnerie piece.

Still, we have seen a number of renowned brands have their go at creating a sonnerie watch (check out our hands-on articles on this Ulysse Nardin, the properly insane Magsonic by Bulgari, or the Audemars Piguet Supersonnerie for more drool-inducing sonneries), so how is this one by Greubel Forsey different? 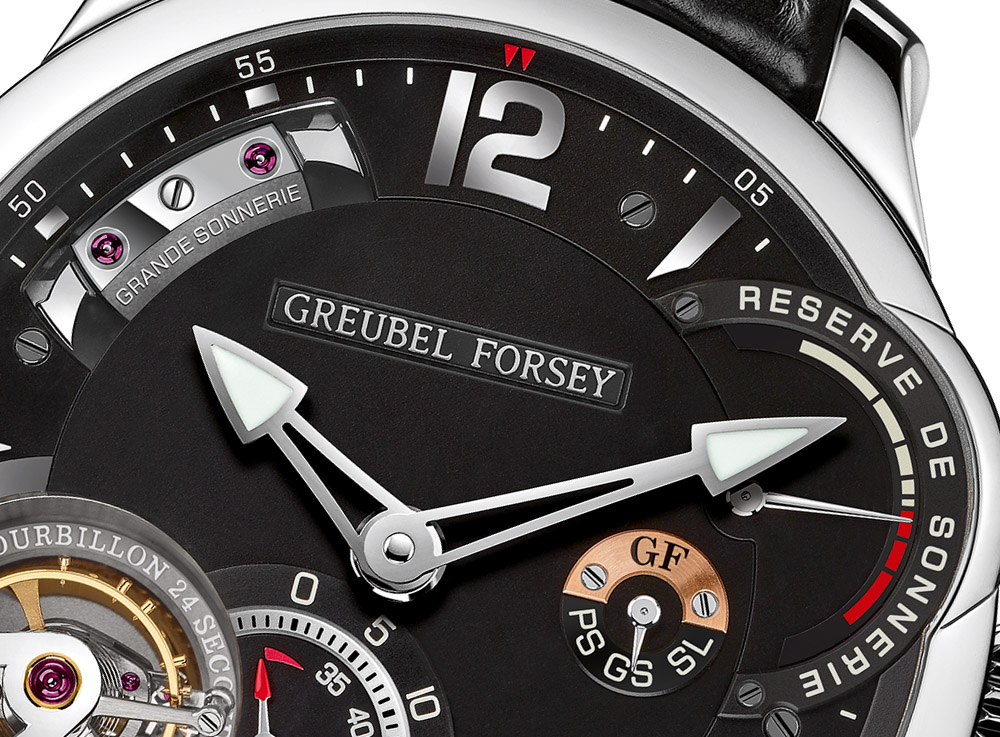 First of all, and this is a real shocker, it is a grand sonnerie that was designed to be worn – because yes, there are a few people out there (more than likely to be repeat-customers of Greubel Forsey) who might have encouraged the brand about the idea of a daily-wearer, seven-figure-priced grand sonnerie. Wrapped not in soft 18k gold or super-heavy platinum but in light-weight titanium, the Greubel Forsey Grande Sonnerie packs all those 935 components into a case that is 43.5mm wide and 16.13mm thick. Yes, that thickness is considerable, but it isn’t considerably (or at all) more than other sonnerie watches – plus, thanks to the lightness of the titanium, it won’t flop around like crazy at the slightest movement of the wrist. 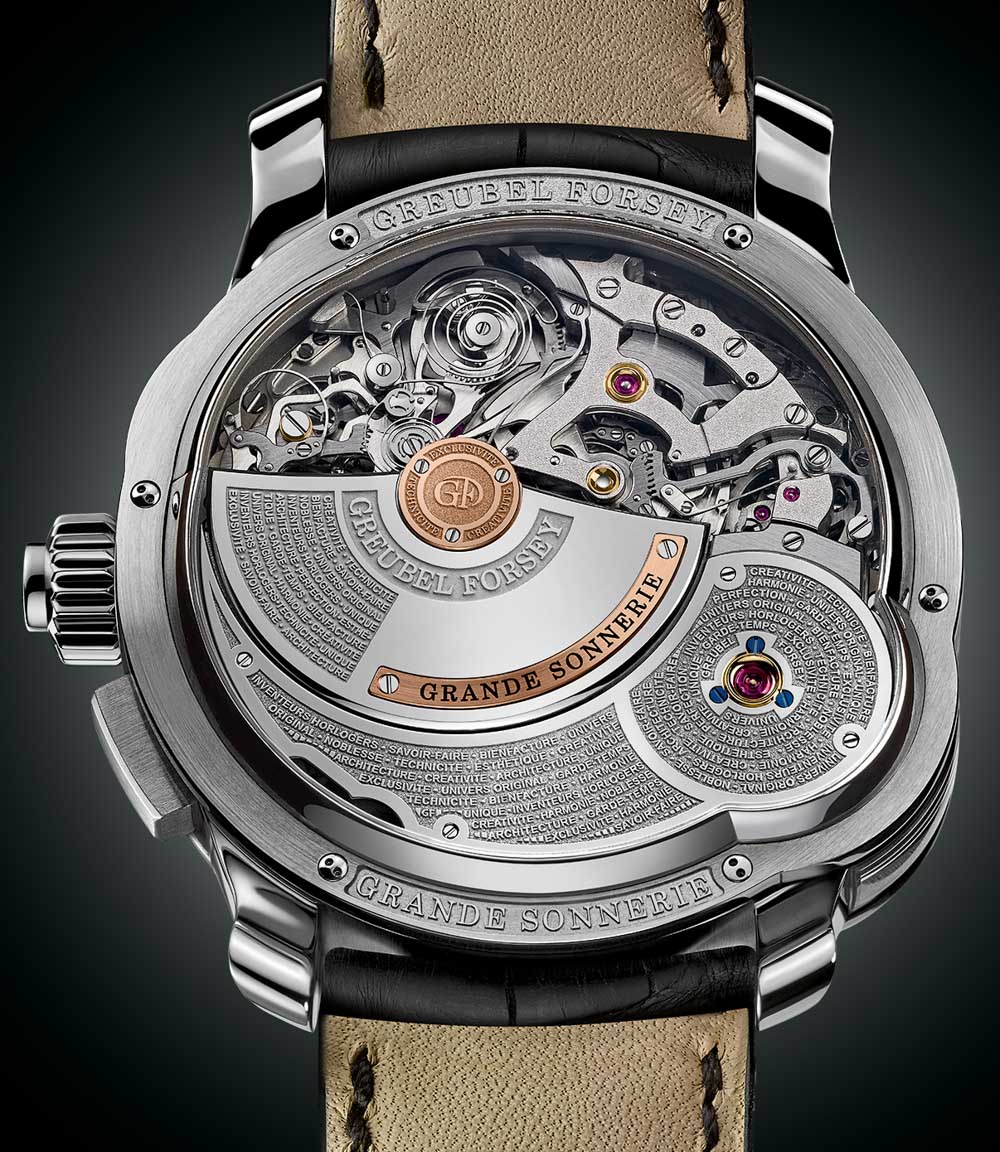 “Wearing 935 parts wrapped around your wrist has never been this comfortable!” – this could be the sales slogan for the Grande Sonnerie… but it isn’t. That said, Greubel Forsey didn’t stop at cramming all those parts into a case that is as small as it could possibly be but went on to address another notorious issue linked to chiming watches: poor power reserve. 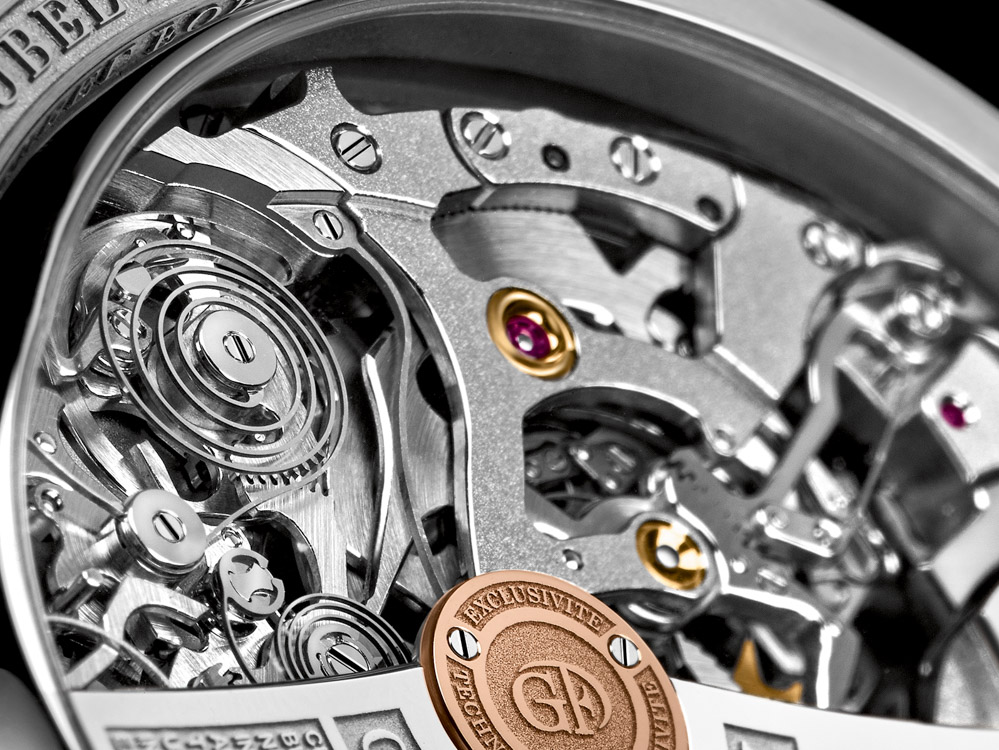 As such, this is one of only a handful chiming watches ever made to feature automatic winding – a rare combination partly because sonnerie/minute repeater movements already require a lot of space and the automatic mechanism simply can’t fit into most, and partly because the frantic movements of the decidedly heavy winding rotor can cause vibrations that don’t do much good to extremely fine and complicated mechanisms packed millimeters away. 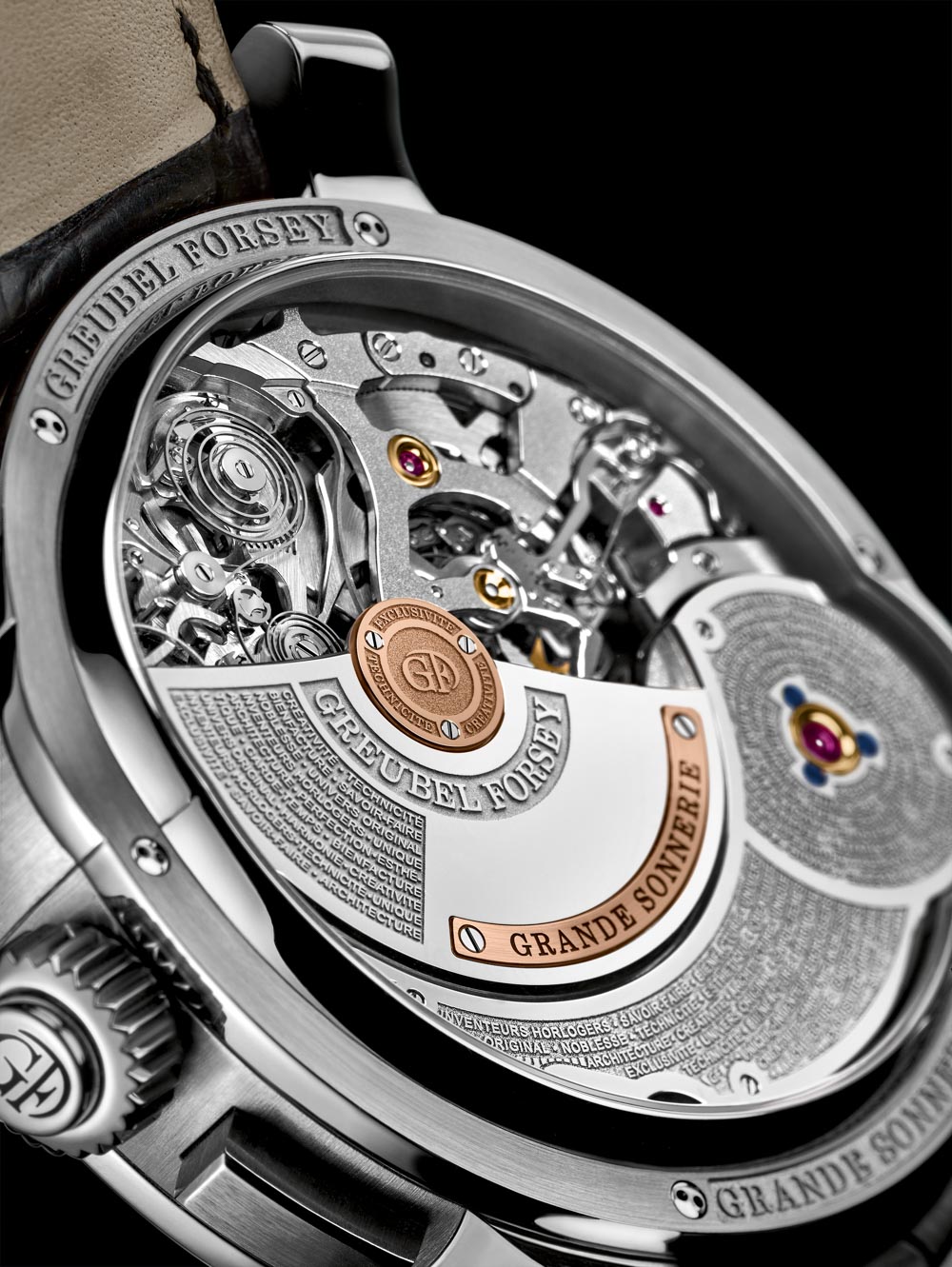 There is a twist to the automatic winding, though: the movement itself remains hand-wound and offers 72 hours of power reserve (indicated on the dial at 5) thanks to two, coaxial, series-coupled, fast-rotating barrels (horological-nerdyness levels reaching hitherto unknown levels!) and hence the automatic winding is reserved solely to recharge the separate power source of the chiming mechanism.

You see, the problem is that for the grand sonnerie to consistently chime every 15 minutes for the passing quarters, it requires a lot of energy. That energy in most all chiming watch movements cannot come from the same barrels that power the timekeeping mechanism because setting the heavy hammers into motion to create the chime would take so much energy from the main barrels that it would considerably affect timekeeping accuracy. Just image your watch had a big power outage every 15 minutes… not ideal.

Thanks to the platinum oscillating weight (that in itself sports some pretty darn intricate decorations), the dedicated striking barrel’s 20-hour power reserve (that’s in grand sonnerie mode, it lasts longer in petite sonnerie that only chimes once every hour automatically) is replenished quickly. It’s here where we should mention that you can turn off the sonnerie altogether by selecting SL (silent mode), as indicated on the sub-dial at 3. 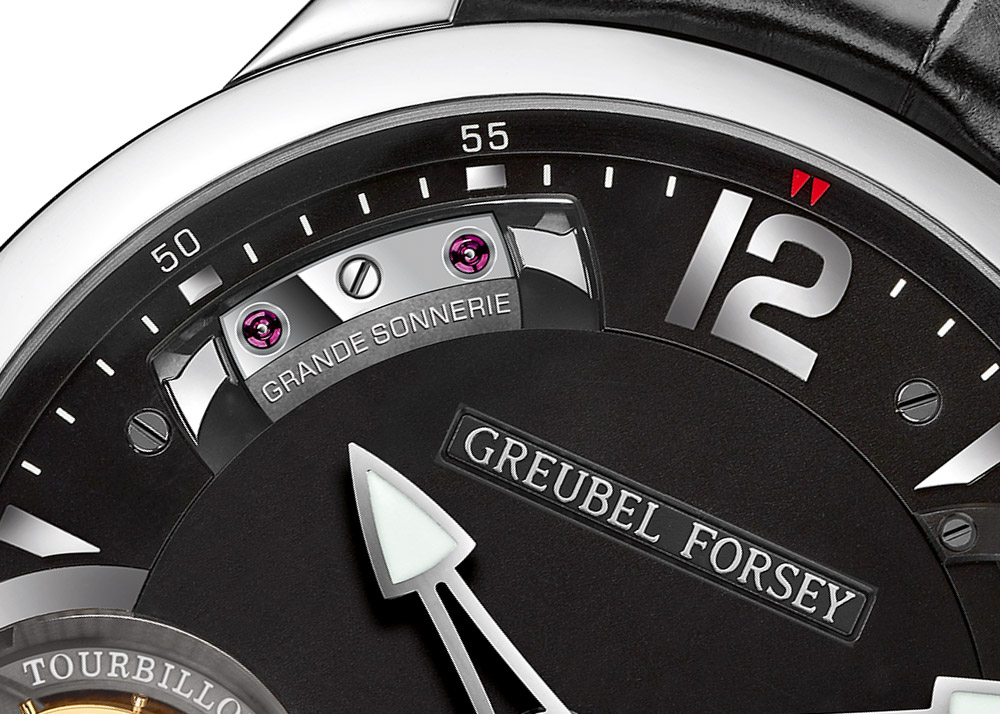 If all this weren’t enough, Greubel Forsey say they’ve added as many as eleven “securities” – these are additional mechanisms that are engineered into the movement to help protect the extremely complex and fragile chiming complication. A mechanical disaster happens (and a mind-alteringly expensive repair bill follows), for example, when you try to set the time while the chime is in progress or if some major discrepancy happens to the power source when it would be needed to supply the mechanism.

Acoustics enjoyed a priority as well, but the watch’s performance in that department we’ll discuss once we have had the watch in our hands – that should be soon enough, as we are eager to listen to this piece in person during SIHH next week. Be sure to follow @ablogtowatch on Instagram because that’s where we’ll be uploading all the craziest hands-on videos and images (live!) during SIHH (we will of course embed them into our hands-on articles on the site also)! 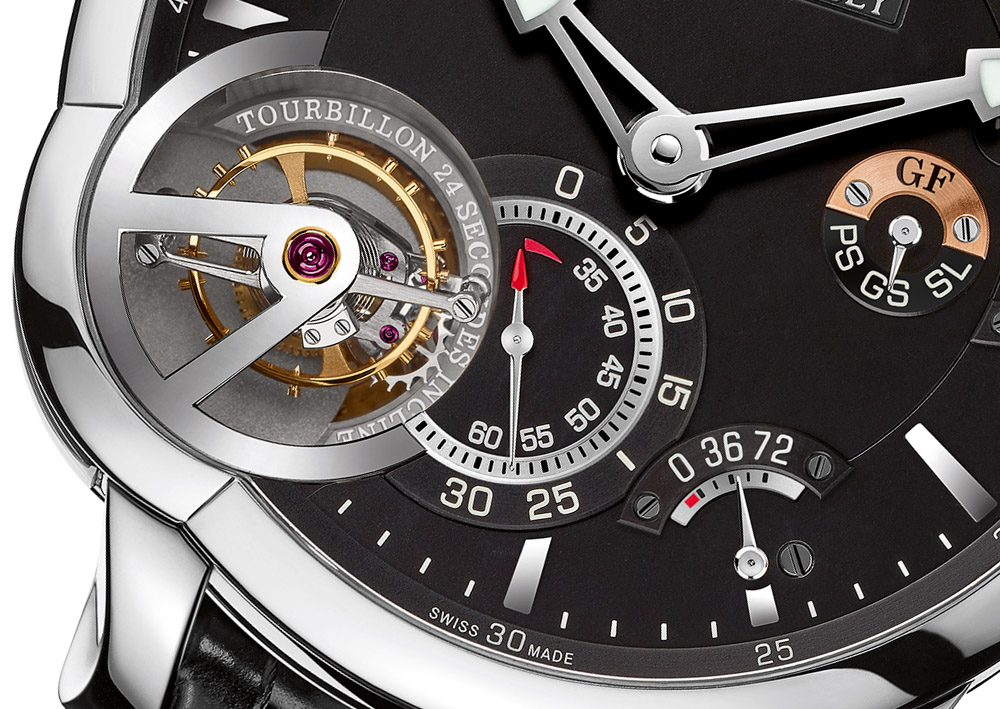 Did we mention that there’s a 24-second, 25°-inclined tourbillon in there as well? No? Well, now we have. The tourbillon assembly takes up 86 of those 935 parts, and yet the whole thing just weighs 0.37 grams – that’s an average weight 0.0043 grams per nicely finished component! 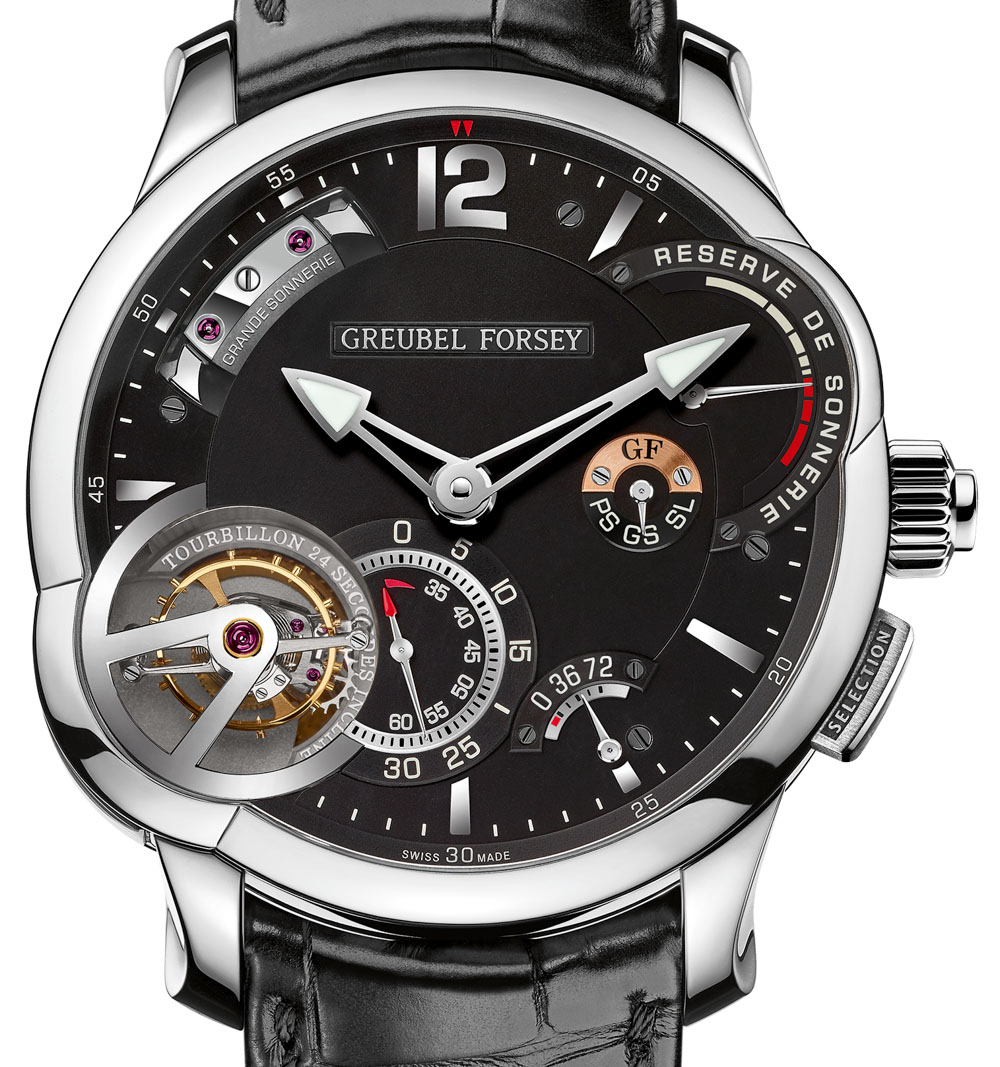