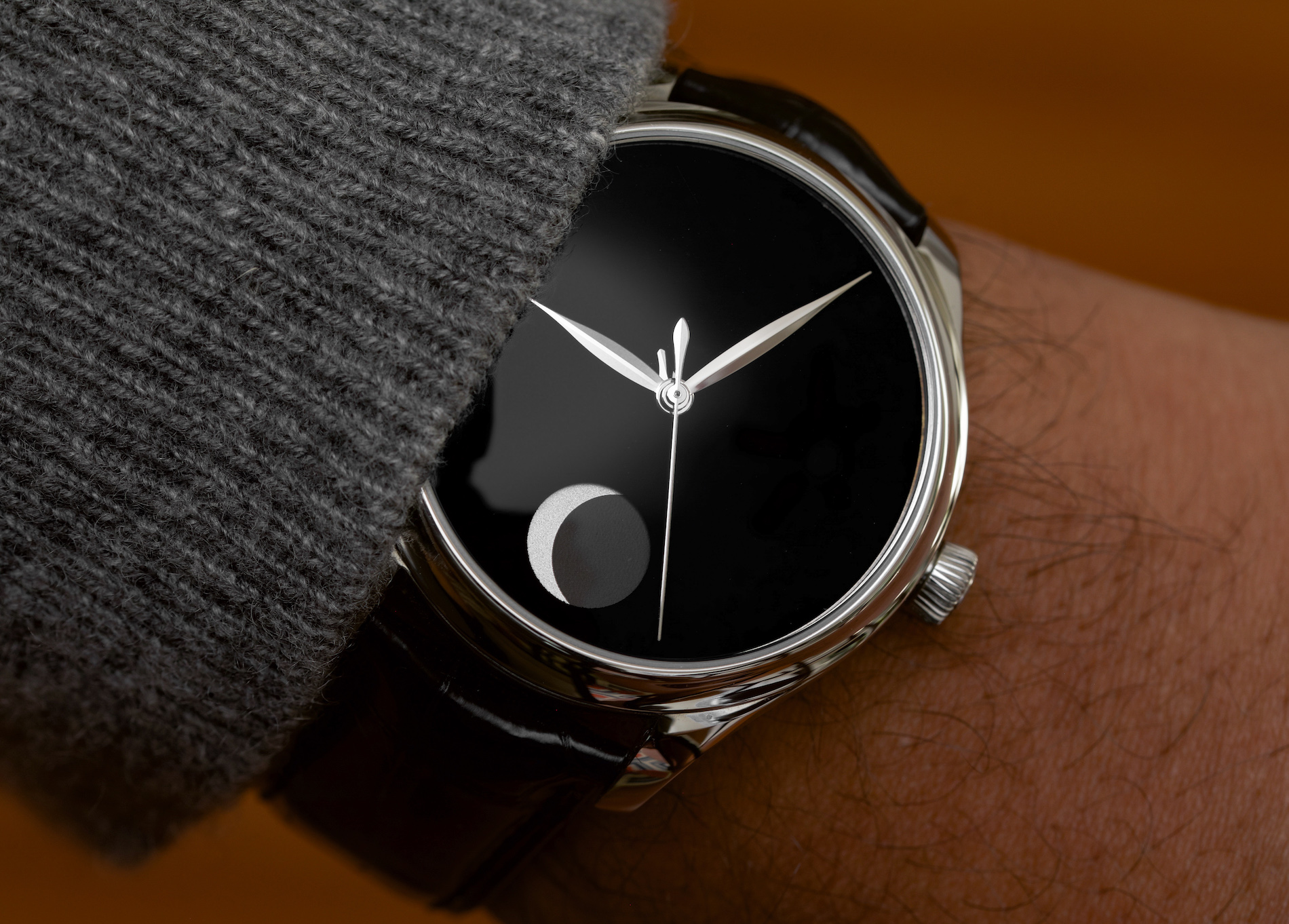 Released a few weeks ago, the H. Moser & Cie Endeavour Perpetual Moon Concept is the watch that captured my imagination more than nearly any other this year, which came as a bit of a shock to me. Why? Well, this being H. Moser & Cie, I was predisposed to write off the use of Vantablack as a gimmick. That’s because I unfairly and immediately classify their watches into two categories. The first being exquisite and underrated masterpieces and the second category is “statement pieces” which are more like marketing campaigns that I’ve found in the past to be a little obnoxious (this excludes their sadly retracted Swiss Icons concept).

What I thought was a watch that would fall into the second category actually ended up being one of my favorite watches that I’ve seen this year. If “bleak flair” was a design style, the H. Moser & Cie. Endeavour Perpetual Moon Concept watch would be the highest-end timepiece encapsulating the philosophy.

The watch, released earlier this fall came in a steel and red gold cased model, but it is the former version that got a lot of attention. That’s because it features a “Vantablack” dial which, as most of you know by now, is the “darkest man-made substance” in the world. Honestly, I was a lot more taken aback by it’s “blackness” when I saw the piece in person. That being said, I walked away as impressed by other aspects of the watch as I did the black hole-mimicking dial.

Limited to 50 pieces in steel and 50 pieces in red gold, I took note of the fact that both are priced exactly the same. No premium for the precious metal, though that one has a blue fume dial, meaning no Vantablack. 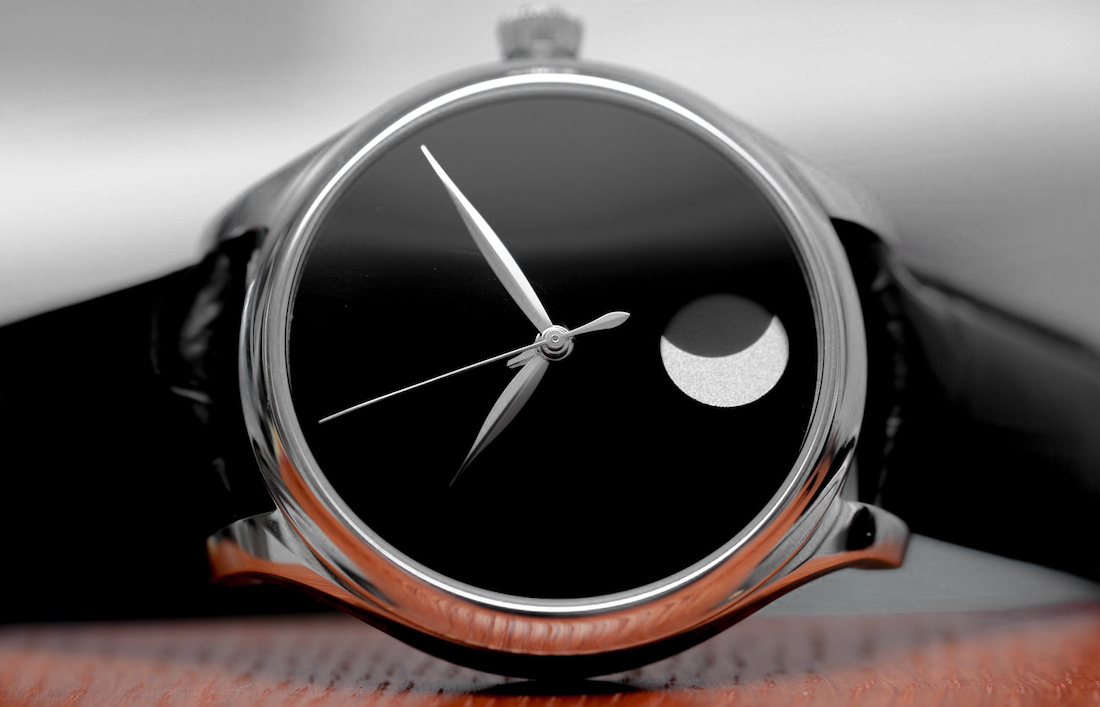 I am pretty sure that H. Moser & Cie are among the first handful of brands to use Vantablack on the dial. (Editor’s Note: I mistakenly wrote that Panerai used Vantablack in one of their watches, which was incorrect. MCT has previously used Vantablack and H. Moser & Cie. are now the second brand to do so.) Vantablack can’t be printed on, but the Perpetual Moon Concept didn’t really have to solve that issue since the sparse dial has nothing other than the hands and moon phase aperture. 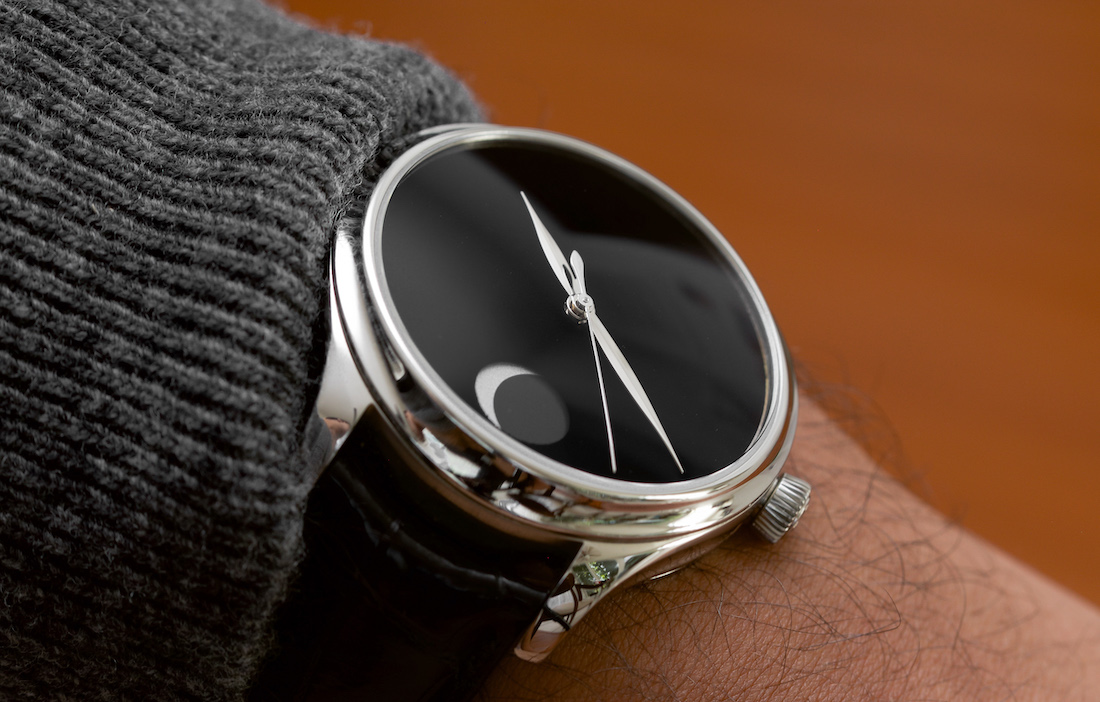 I don’t know if I’d ever get tired of looking at the hands and moon phase, both appearing to float over deep black nothingness. It’s a black so deep that it basically absorbs 100% of light. It’s all very cool in theory as well as execution. I can’t find any other way to say it without making me feel like I’m undermining the entire purpose of a “hands-on” article but…you have to see the Vantablack dial to appreciate it. Photos unfortunately just can’t capture the deep, deep blackness of the dial. This is also a good time to note that the dial crystal, as well as that on the caseback, has an AR coating, which is really important in a piece like this.

However, while the use of the material on the dial is interesting and really so captivating, so much of the personality of the watch also relies on the minimalist moon phase aperture that refuses to let go of one’s attention after being seen in action. 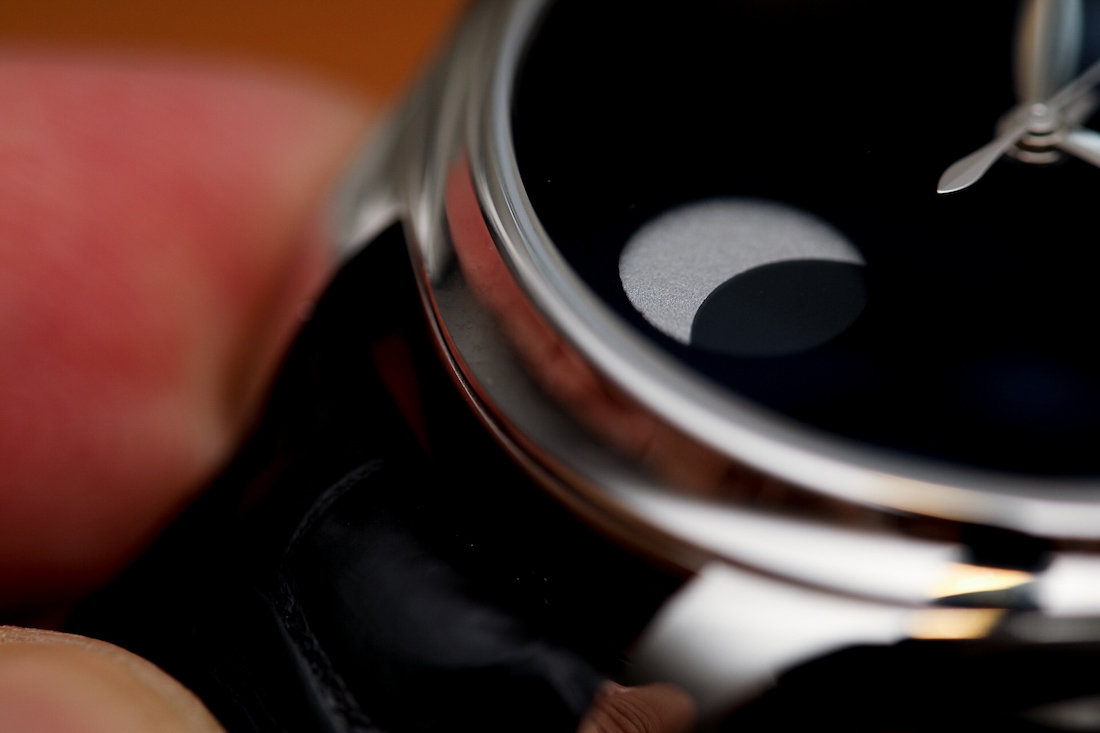 First off, the moon phase indicator here is very precise, allowing for one day’s deviation every 1,027 years. Though the time I spent with the watch was slightly shorter than that timeframe, I am going to take the brand’s word when it comes to that claim. Admittedly, the majority of the time I spent with the watch involved slack-jawed gazing at the dial, moon phase, and movement through the caseback. I’ll stay on topic, but man, I am really smitten with this watch. 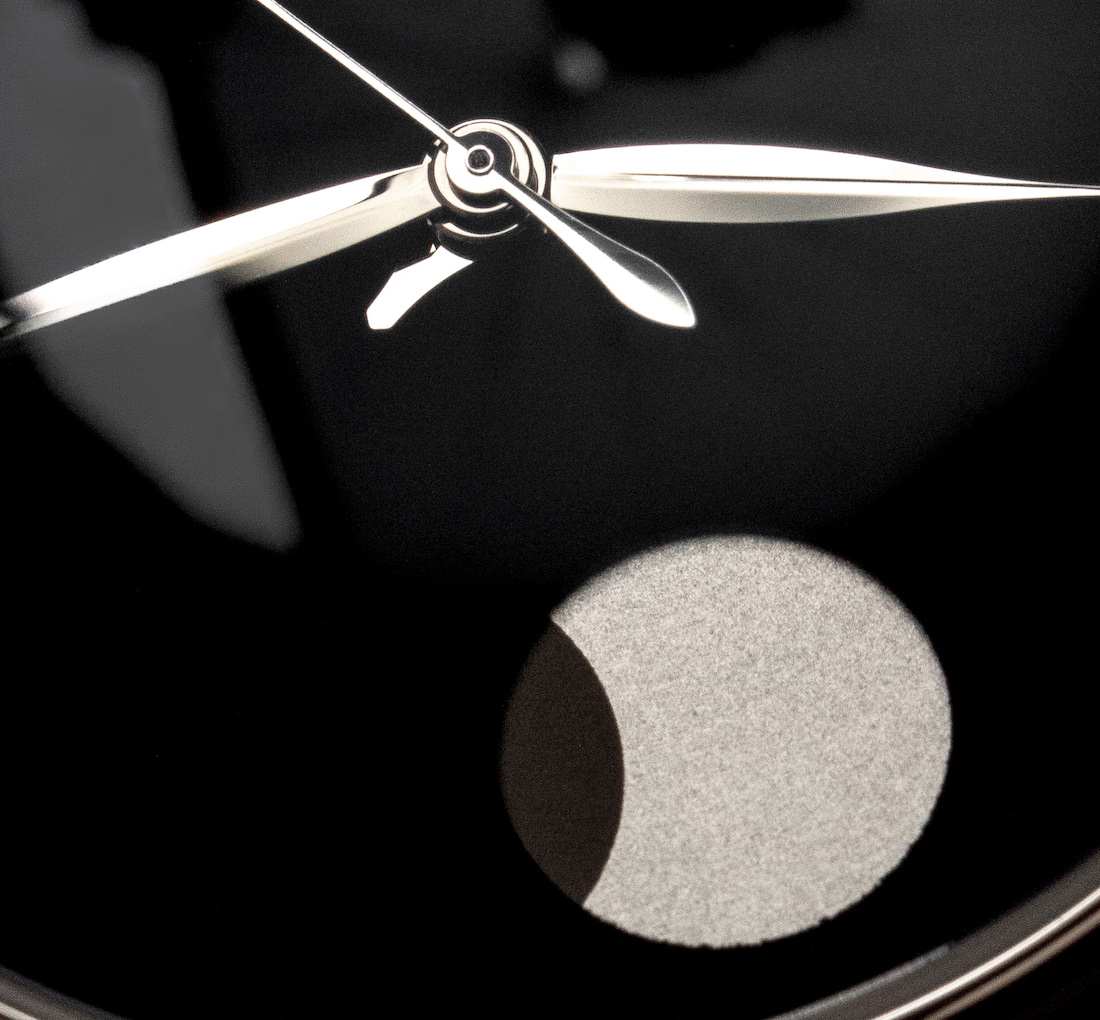 The moon phase indicator is achieved by using a central moon disk which has four moons on it, rather than most others that have two. The moon phase can also be set backward if you need to do so for any reason.

The moon phase can be set by using the pusher on the side of the case, and the small AM/PM hand that you find among the standard handset ensures accuracy. I… did set the moon phase only to begin playing with the watch and throwing accuracy to the wind in order to see how the watch looks when the moon phase aperture is mostly black as opposed to when it’s mostly a shimmering silver, and everything in between. 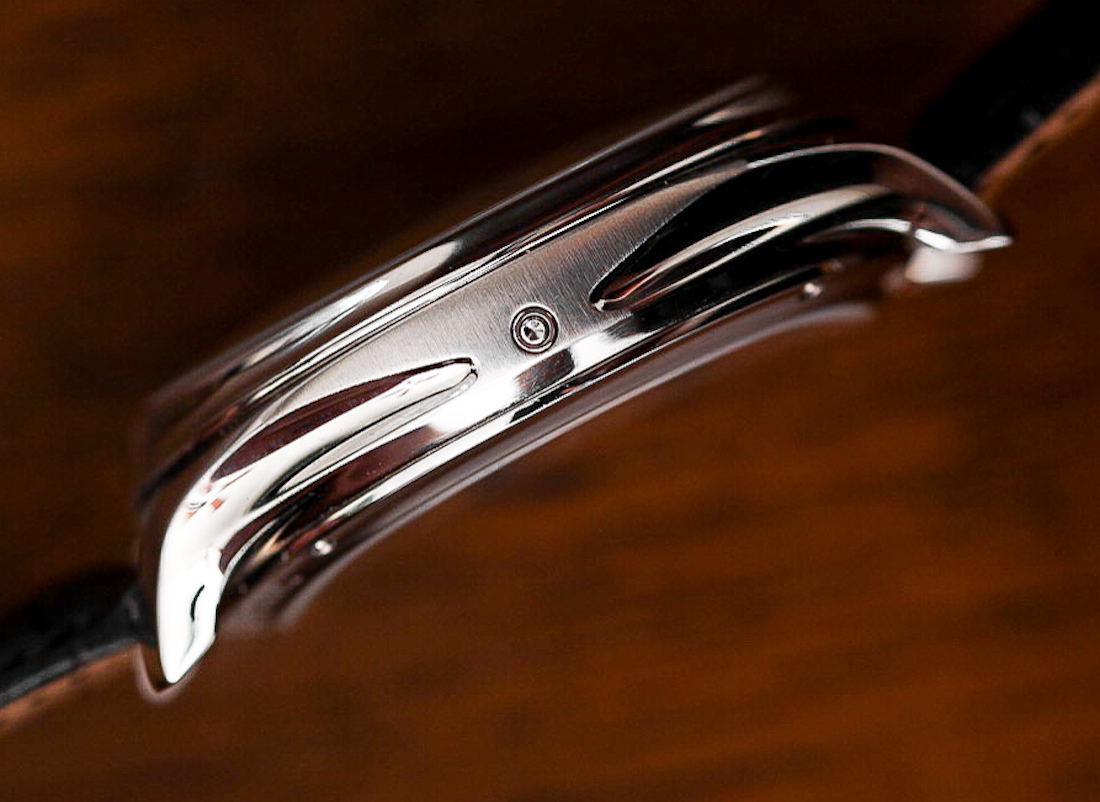 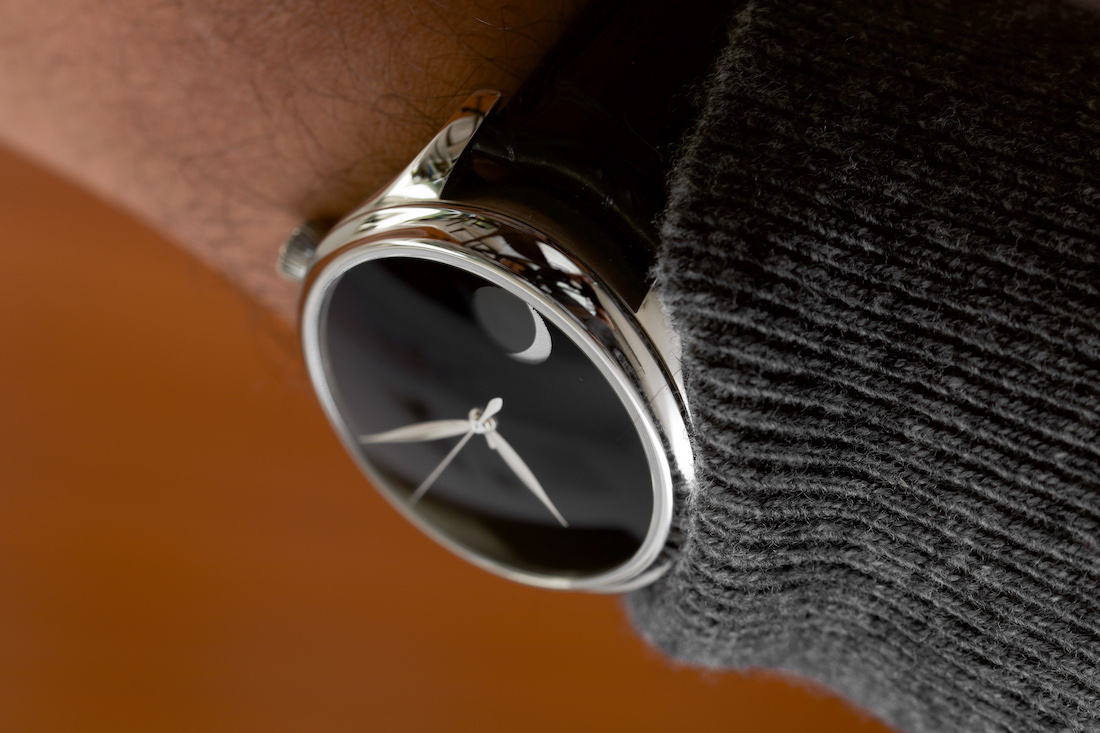 In theory, if you keep the movement wound once per week, you will be able to accurately track the phases of the moon for that over-1,000 year period of time. Not to oversell it, there are plenty of moon phases out there that are technically more impressive and more precise but I don’t think any of them do it with the “bleak flair” of this watch.

The caseback side of the Endeavour Perpetual Moon Concept shows off the absolutely beautiful in-house HMC 801 movement. This manual wind caliber features Moser’s interchangeable escapement and Straumann Hairspring, in addition to the features I’ve already mentioned like the AM/PM indicator and moon phase. The HMC 801 operates at 18,000 vph and has a 7-day power reserve, which is shown through a power reserve indicator on the movement. 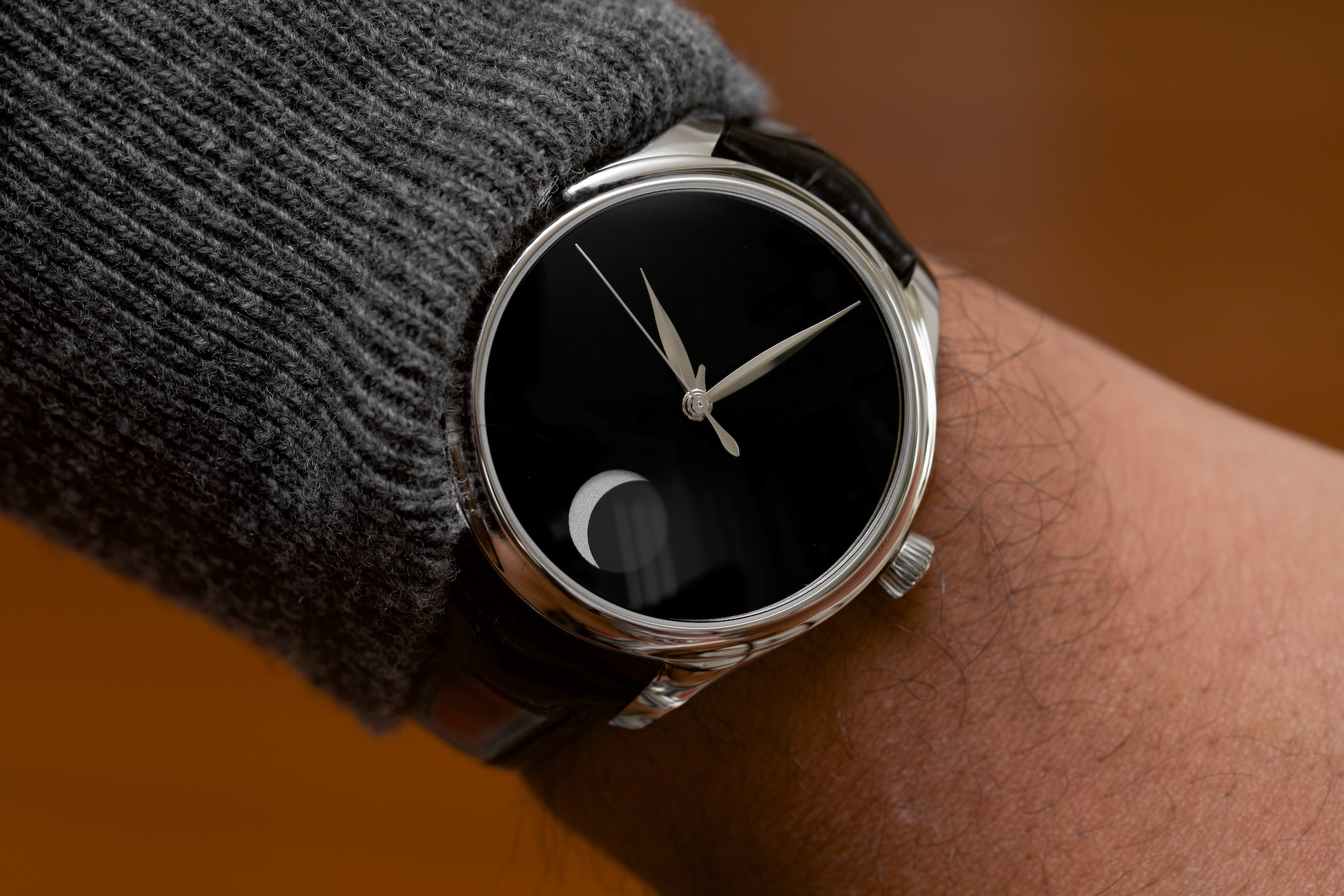 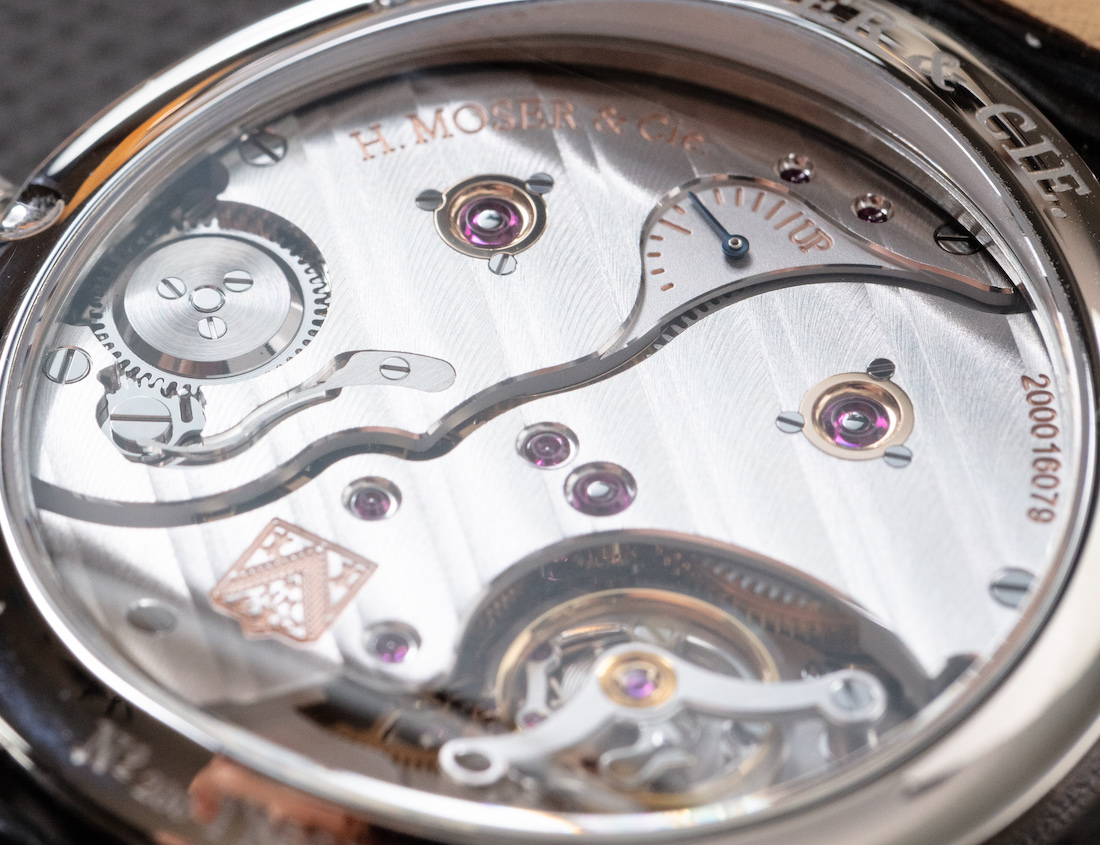 Note the curved sapphire crystal on the caseback

As important as the functionality of the movement in a watch priced more than an entry-level Mercedes-Benz sedan is the finishing and aesthetic appeal. I love the gently curved line that runs down the movement, like a curved fissure or schism splitting the piece in two. 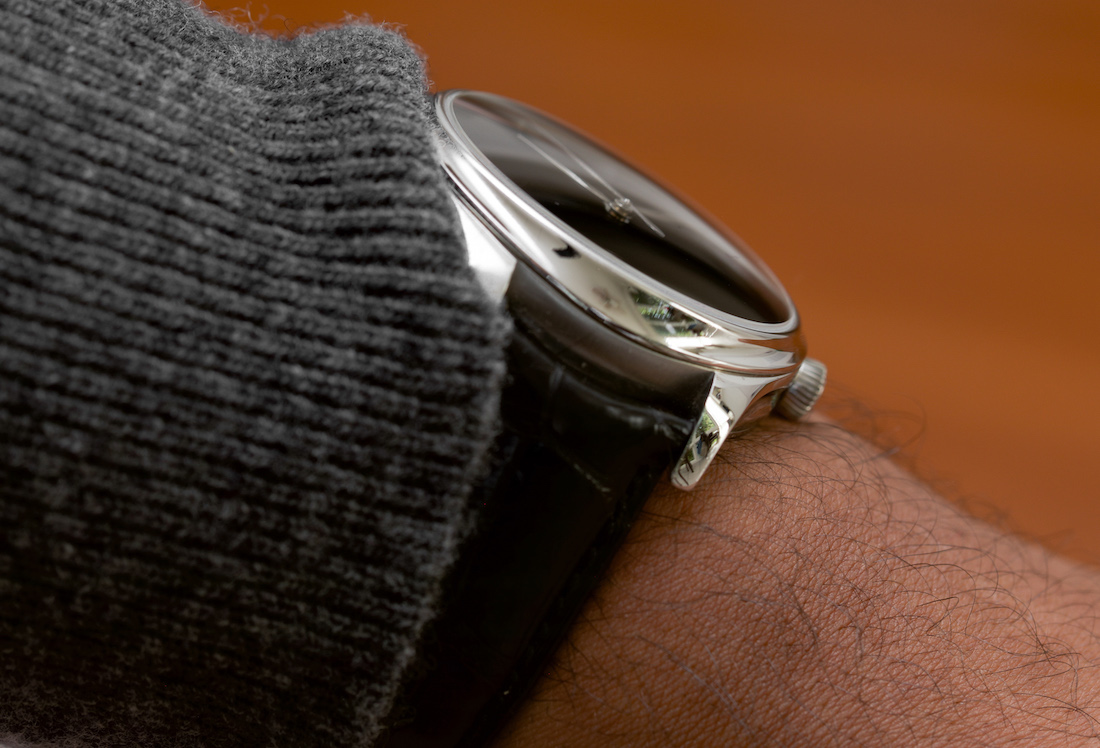 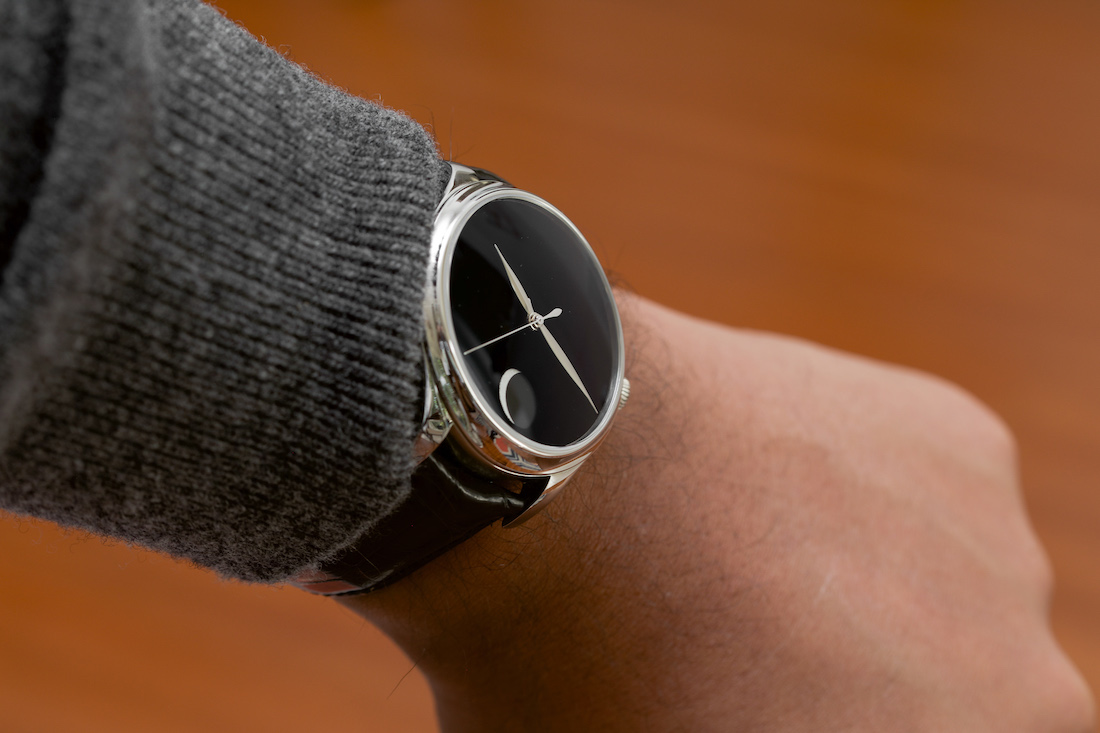 The H. Moser & Cie Endeavour Perpetual Moon Concept case has perfect proportions for a watch like this. At 42mm wide and 12.9mm thick (with some very short lugs), it wore perfectly on my wrist. The brushing and polishing along with the curves and contours on the case allow for an unobtrusive case that also isn’t bland or without any character. 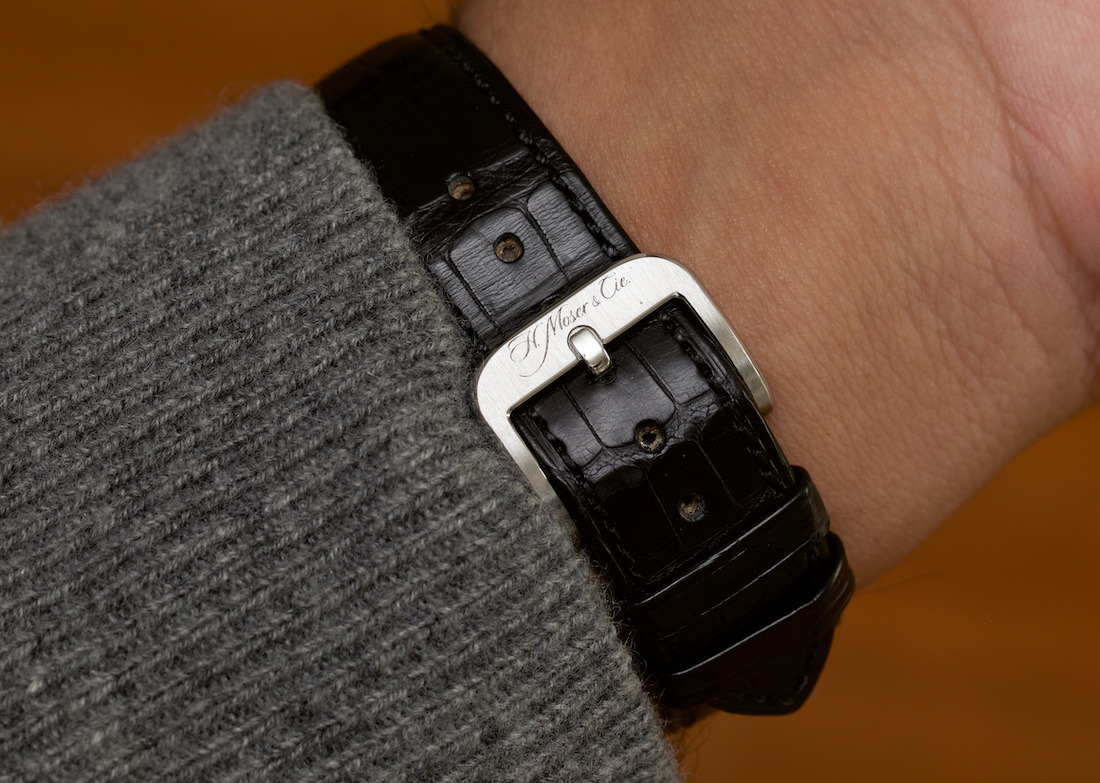 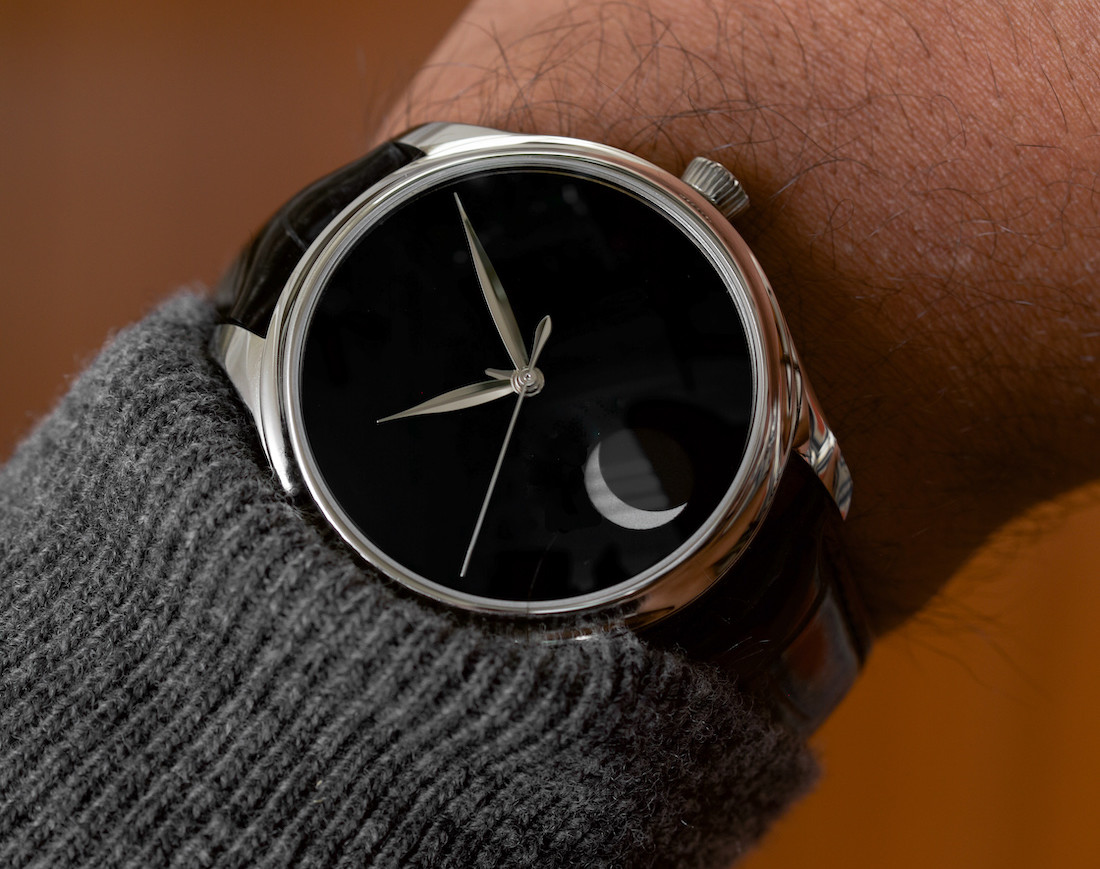 It’s not easy to actually be creative and take risks without being gimmicky when it comes to high-end watchmaking. H. Moser & Cie achieved this with their Endeavour Perpetual Moon Concept watch with a Vantablack dial. Only 50 of these watches have been made and I have a feeling they’re spoken for and the owners won’t be parting with them anytime soon. This makes the price of $35,000 something of a moot point. What I can comment on is whether or not I think that’s a reasonable price for the product and the answer is a resounding yes. I want this watch in my own collection and can’t type out the things I’d do to own one. To learn more check out their website at h-moser.com.