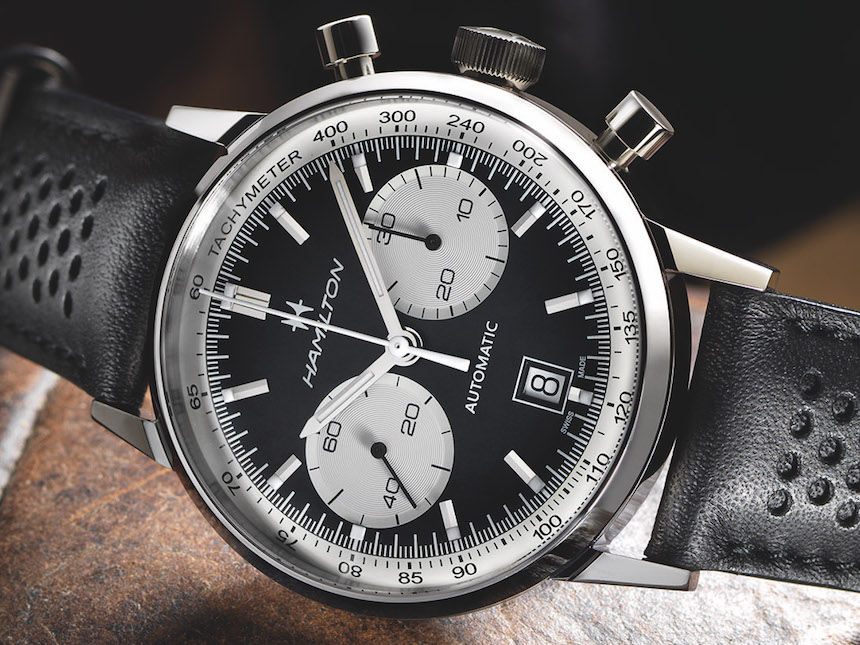 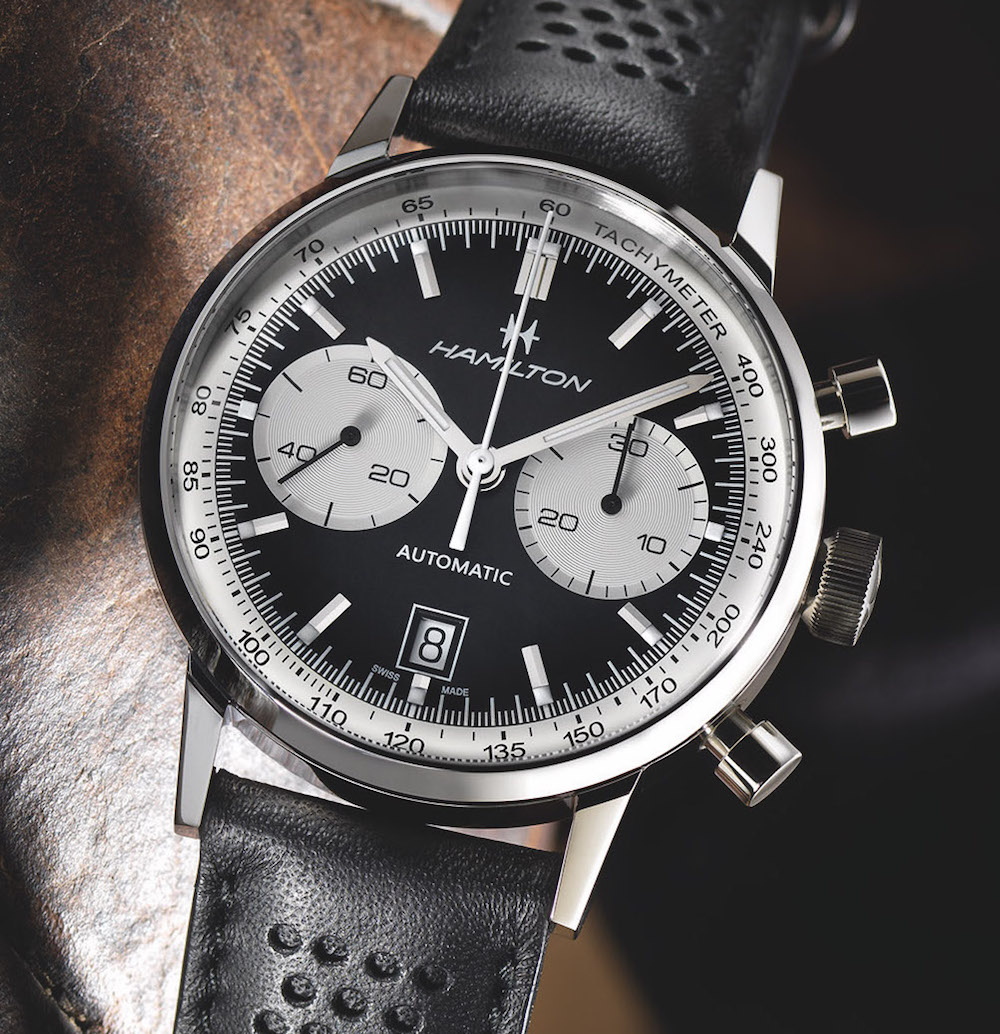 In the past couple of years, many brands have dug into their archives to release reissues or vintage-inspired pieces. Some have been hits, while some other have been misses. Personally, I find that the convenience of buying a new watch that looks like an old one trumps the homework – and some of the thrill, admittedly – that is required to suss out a vintage piece in good condition. With that noted, here’s what should be one of the more popular vintage re-releases this year: the new Hamilton Intra-Matic 68 chronograph. 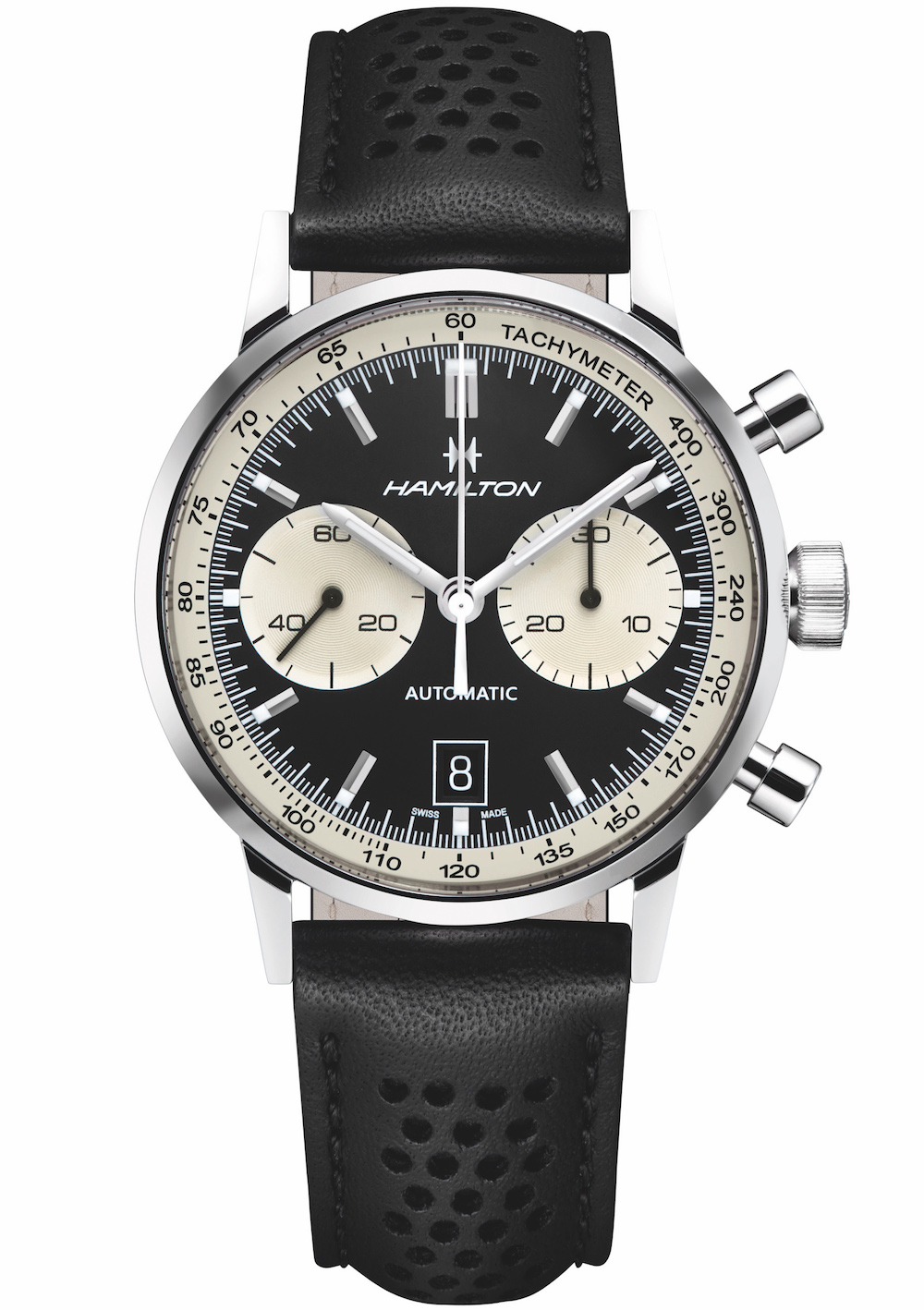 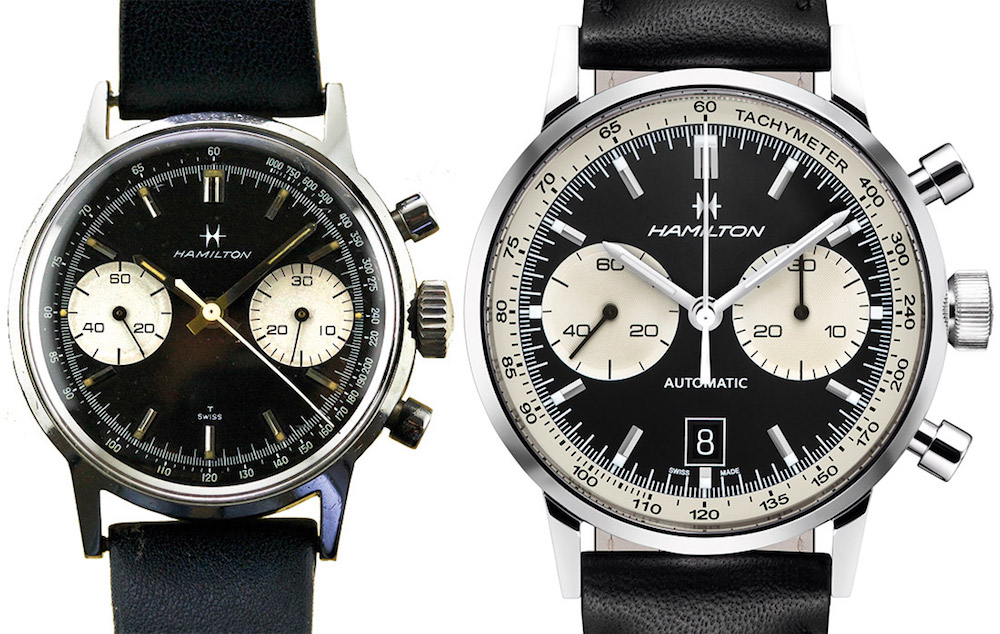 Yes, that’s pretty close to how a 36mm vintage compares to a modern 42mm – looks rather small in comparison. Lefthand image via mentawatches.com

In more recent Hamilton history, a certain two-hand dress watch called just the Intra-Matic (reviewed here) was introduced in 2012. It was as purely and overtly retro as this Hamilton Intra-Matic 68 chronograph – though in a much more Mad Men, Don Draper kind of way – and it seems that Hamilton found there was a nostalgic market for the classic looks from that era.

The Hamilton Intra-Matic 68 comes in a 42mm stainless steel case with a thin polished bezel and features prominent pump pushers to control the chronograph at the usual 2 and 4 o’clock positions. The crown also looks fairly large to maintain the original’s proportions in this department – and it should also help with time- and date-setting. 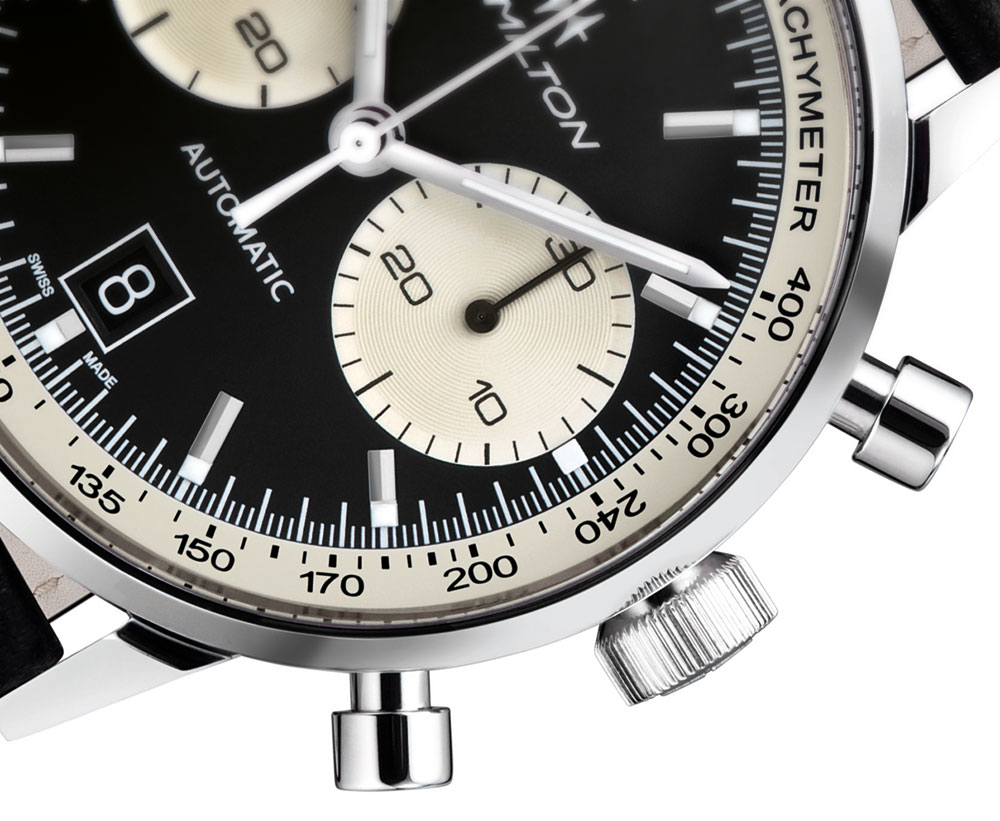 All too often, watches in this style have very paltry water resistance, but I’m pleased to say that the Hamilton Intra-Matic 68 has a rated water resistance of 100 meters. This is a refreshing change from the usual 30 or 50 meters that we often get from a dressier watch, and chronographs are also notoriously harder to get water-resistant. The watch also comes with a vintage-looking perforated black calf leather strap. 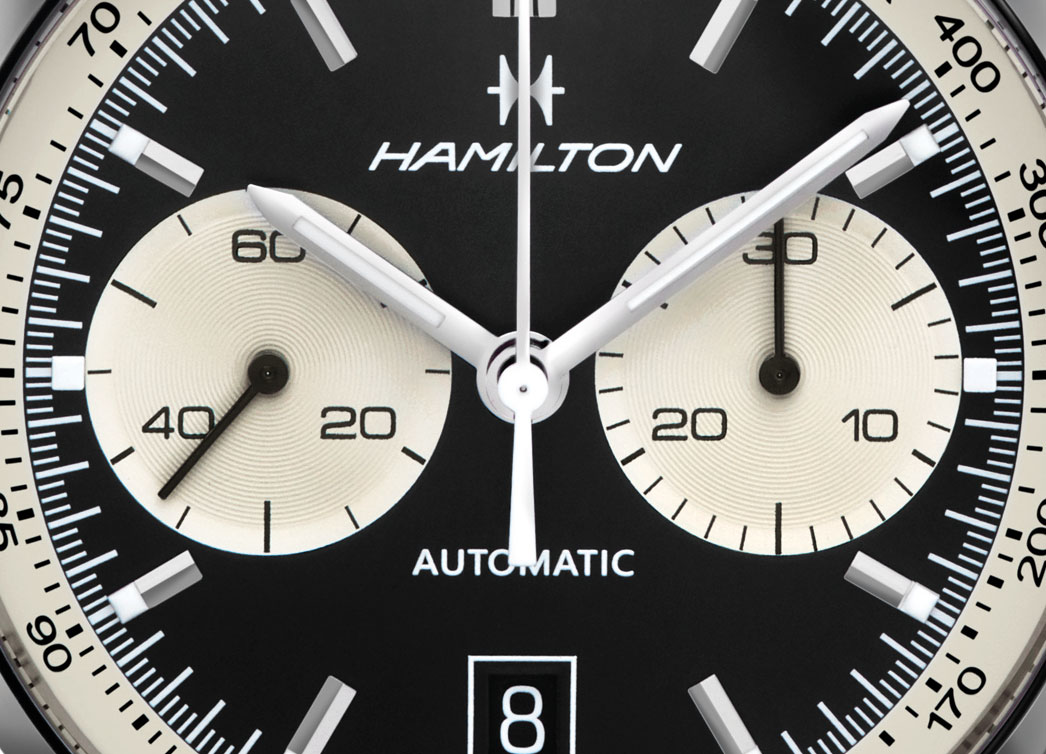 At 42mm, the Hamilton Intra-Matic 68 is very much larger than the Chrono-Matic and Chronograph B watches that it was based on. And because the bezel looks so thin, I suspect the watch would look even larger on the wrist. I would certainly have preferred a smaller case size. I think 39mm or 40mm would be the sweet spot, but since there’s a preference for larger watches these days, I’m not entirely surprised at Hamilton went with 42mm in the end. 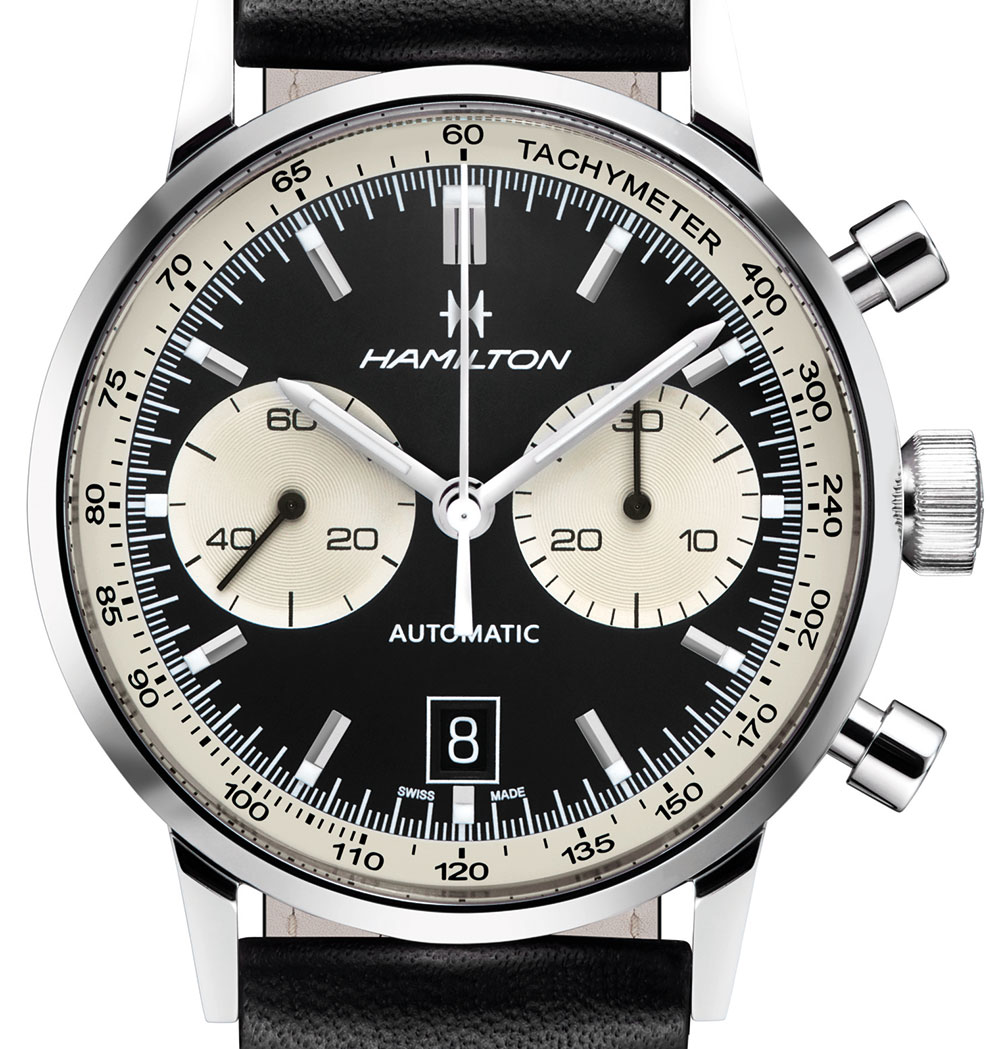 The Hamilton Intra-Matic 68 features what is commonly known as a “reverse panda dial,” meaning a black dial with white sub-dials. A white, or rather off-white, tachymeter scale runs along the circumference of the dial and there are two sub-dials. At 9 o’clock you have the running seconds, and at 3 o’clock the 30-minute counter. The sub-dials feature simple straight hands in black that contrast sharply against the white background, making it easy to read the running seconds and elapsed minutes. The central chronograph seconds hand is white and stands out sharply against the black dial. The pencil-shaped hands feature Super-LumiNova as do the ends of the hour indices. 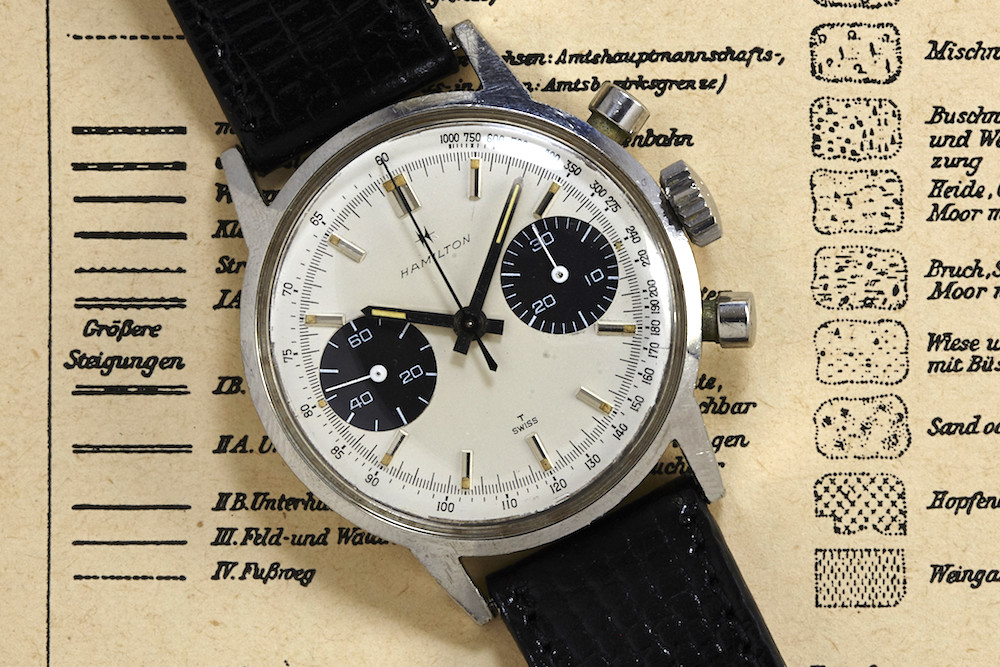 Inside, the Hamilton Intra-Matic 68 is powered by Hamilton’s H-31 automatic chronograph movement, which is a modified version of the ever-reliable Valjoux 7753 and features a longer power reserve of 60 hours. The H-31 is also used in other Hamilton chronograph watches like the Pan Europ watch. As a thick movement, and since Hamilton has not provided the full case measurements beyond diameter, we are guessing that the Hamilton Intra-Matic 68 might be on the thick side, though we’ll be sure to bring you hands-on pictures and impressions from Baselworld about that. And using this movement, 42mm wide was as small as Hamilton could have made it to keep the width-to-thickness proportions manageable. 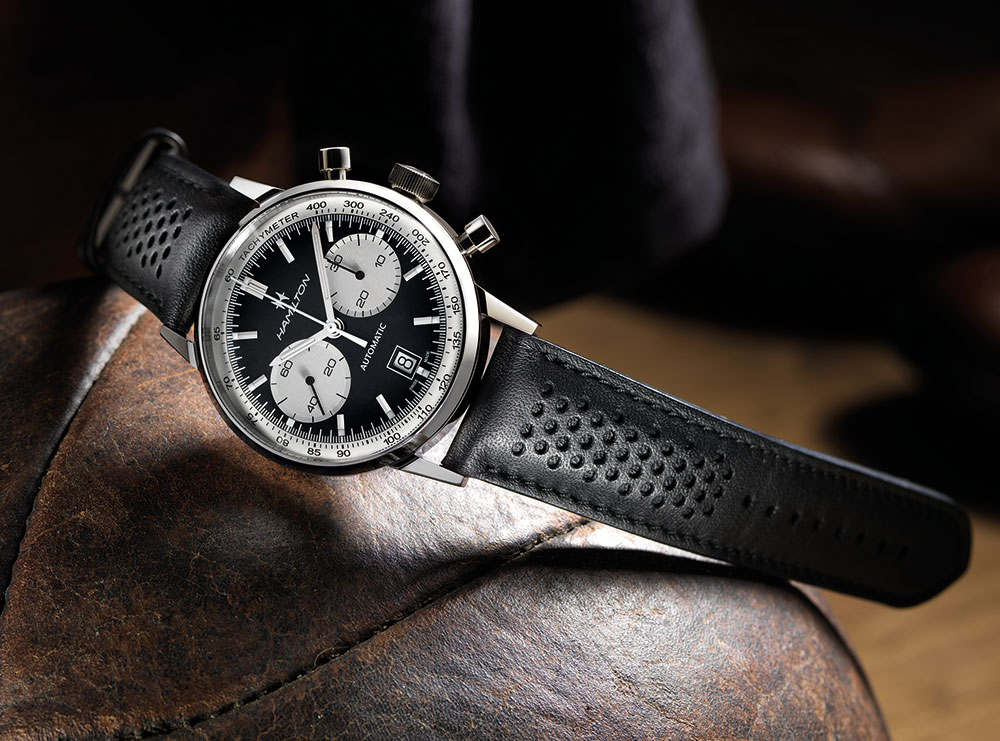