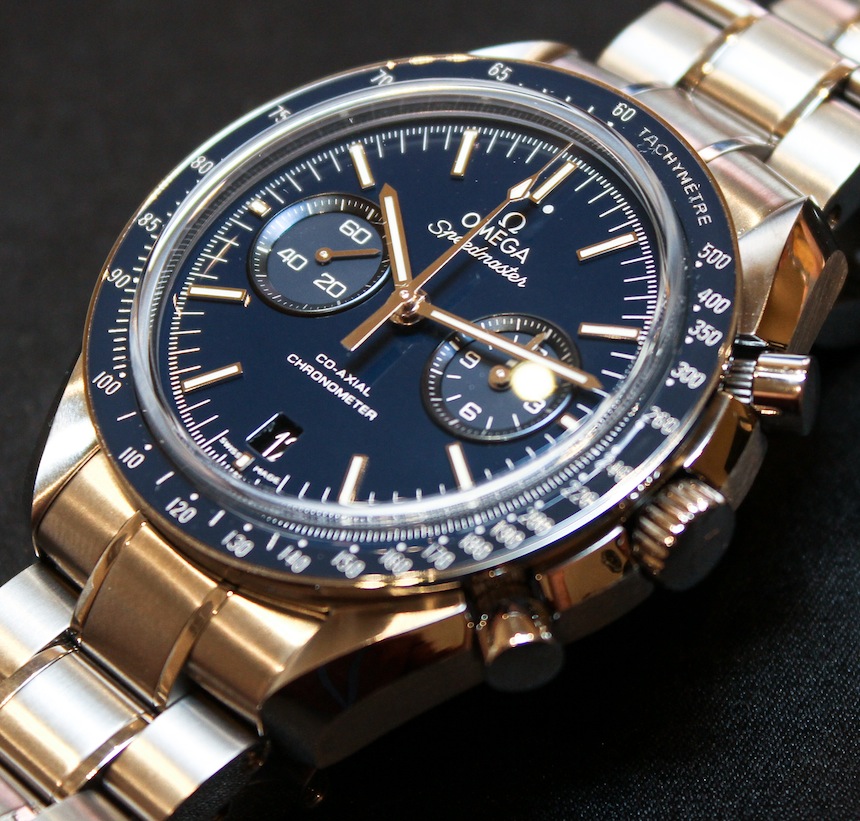 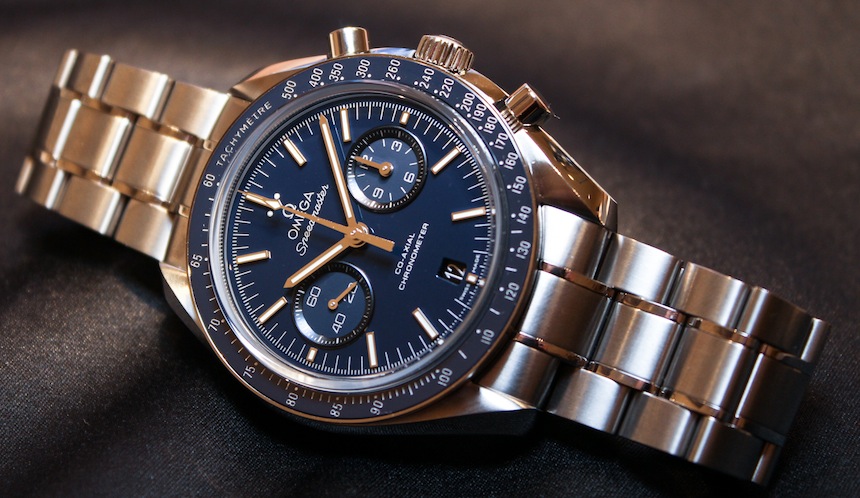 Here we have one of my favorite chronographs from Baselworld this year. While it is certainly tough to beat Omega’s stunning Speedmaster Dark Side of the Moon, if you’re looking for something a bit more under the radar while still offering the charm of a Moonwatch, it’s going to be hard to deny the appeal of a titanium Omega Speedmaster Co-Axial Chronograph Moonwatch with a beautiful blue dial and Omega’s excellent 9300 automatic co-axial chronograph movement.

Don’t get me wrong, I love a standard black-on-steel Moonwatch as much as the next guy, it’s a classic that deserves to be both protected and continued by Omega. As a watch, the Speedmaster Moonwatch represents a truly appealing and well-rounded offering in the sport watch market, whether you look at any of the past legacy models or the still-fresh Co-axial 9300 versions (hands-on review), like the all-titanium model shown here.

The Speedmaster Moonwatch Co-Axial Titanium Blue (ref: 311.90.44.51.03.001 on the titanium bracelet) is an absolute stunner. The warm tone of the titanium case and bracelet is perfectly matched by the rich iridescent blue of the tachymeter bezel and dial. The finishing on the blue dial is remarkable, smooth and glassy with a subtle metallic look that is quite similar to the quality seen on the lovely black dial of the Speedmaster Dark Side of the Moon. Aside from the lightweight metal and the blue coloring, this latest titanium Speedmaster is carrying the same look and layout as the current bi-compax Speedmaster Co-Axial. 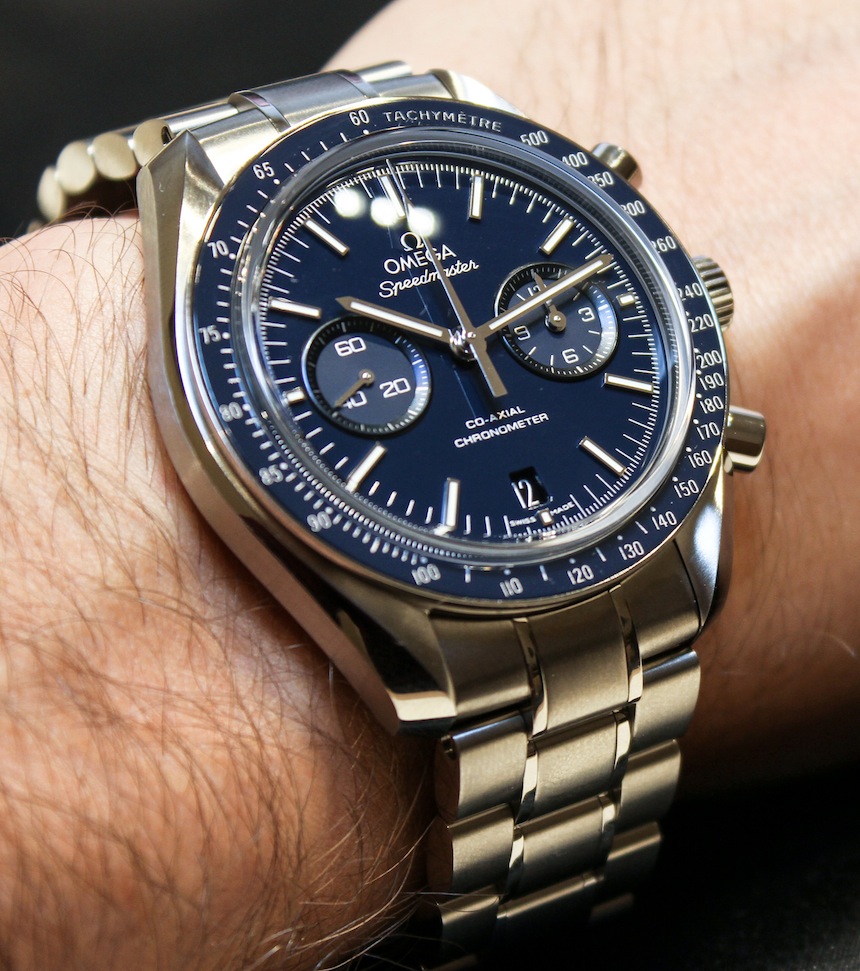 The titanium case measures 44.25mm wide and is fitted with an anti-reflective sapphire crystal and one of Omega’s signature ultra-wide display case backs. The display case back offers a full view of the Omega calibre 9300 Co-Axial chronograph movement, boasting not only a column wheel but also a silicon balance spring on a free sprung balance. Sixty hours of power reserve are provided via dual barrels and the movement is rhodium plated and finished with Geneva stripes. The 9300 offers a bi-compax layout with the running seconds at nine and the twin chronograph measure at three. The twin sub dial has two hands, showing hours (max of 12) and minutes on one sub dial. 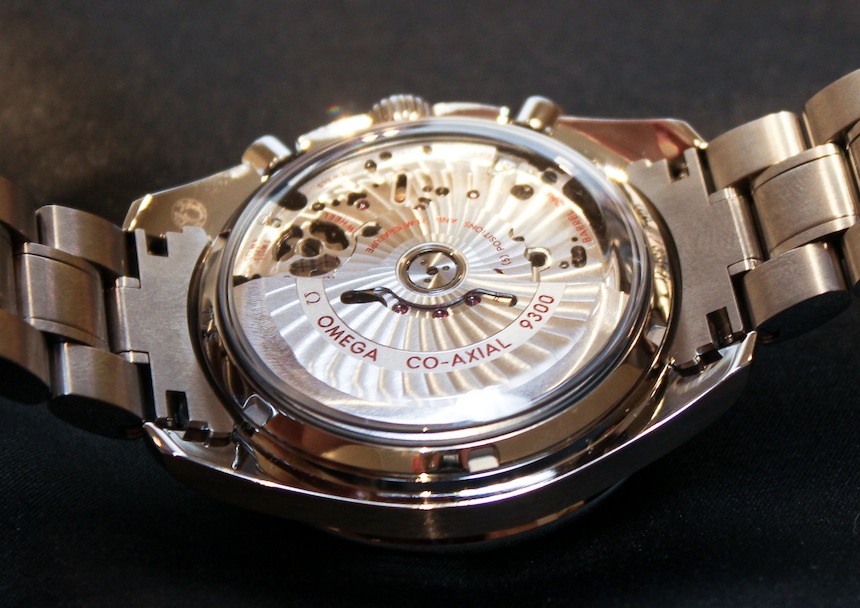 Just as I think the iconic Speedmaster Moonwatch design and legacy should be protected and continually offered by Omega, I also believe that the more versions the better. Omega makes a lot of Speedmaster variations and they generally expand from the original design and offer varying levels of sportiness (a la the Speedmaster Racing) or specialty designs (like the Speedmaster Alaska Project). The reason I like this titanium blue model is that it offers that all-star Moonwatch aesthetic with a lighter wrist presence and that distinctive blue dial. Just enough of a change to offer something new to buyers without messing with their winning formula. It’s what Omega does best. 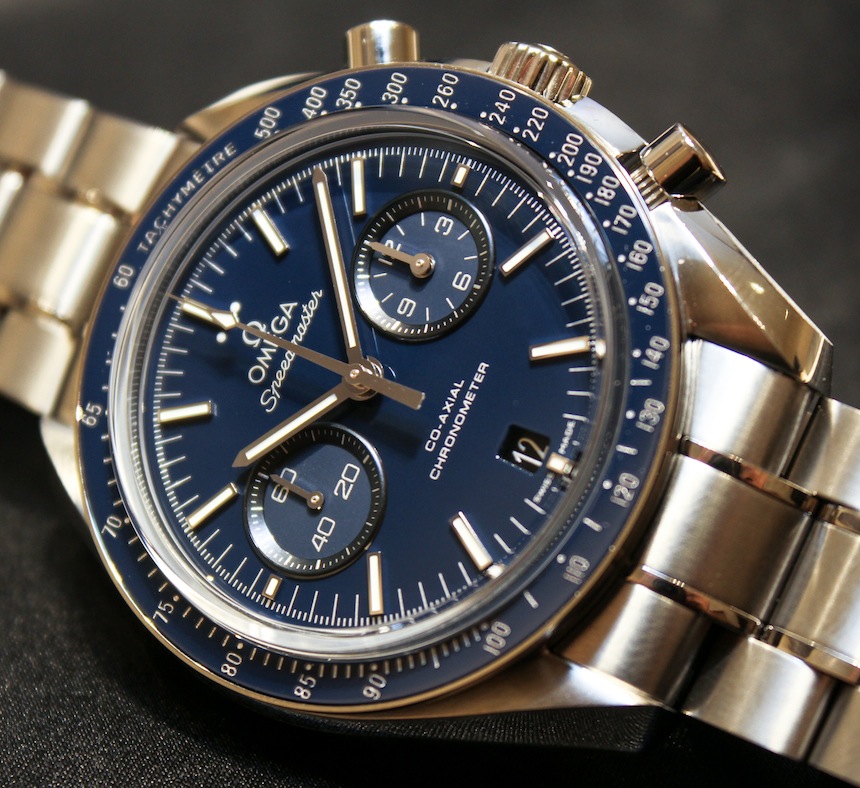 Now as much a luxury item as a tool watch, this titanium and blue Speedmaster will set you back $11,400 USD at retail. With a high tech movement and the looks to work in almost any situation, as long as you like your Speedmaster’s on the large size, this one should do nicely and stands out among the many other Speedmaster variations as one that successfully departs from the iconic Moonwatch just enough to stand on its own. omegawatches.com