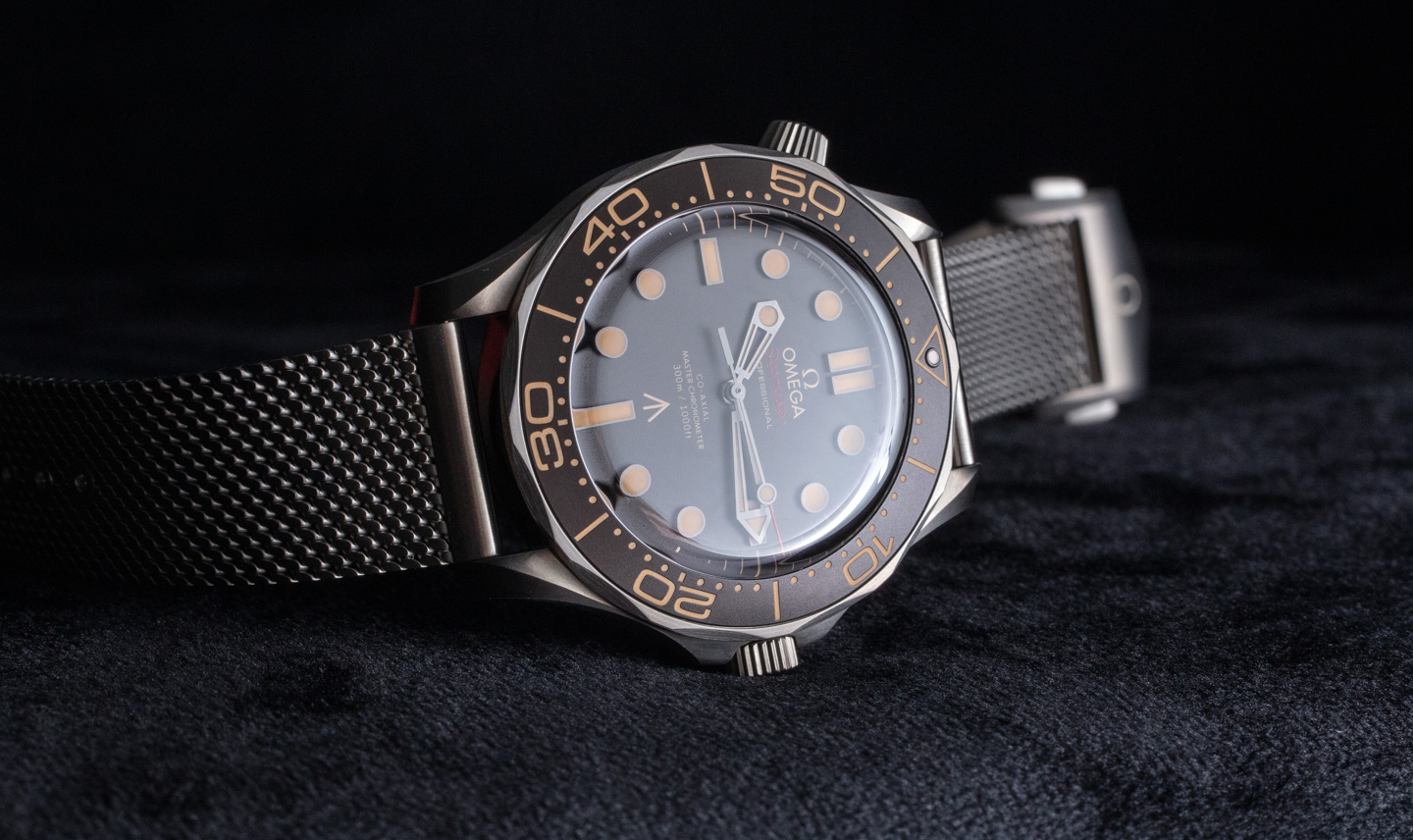 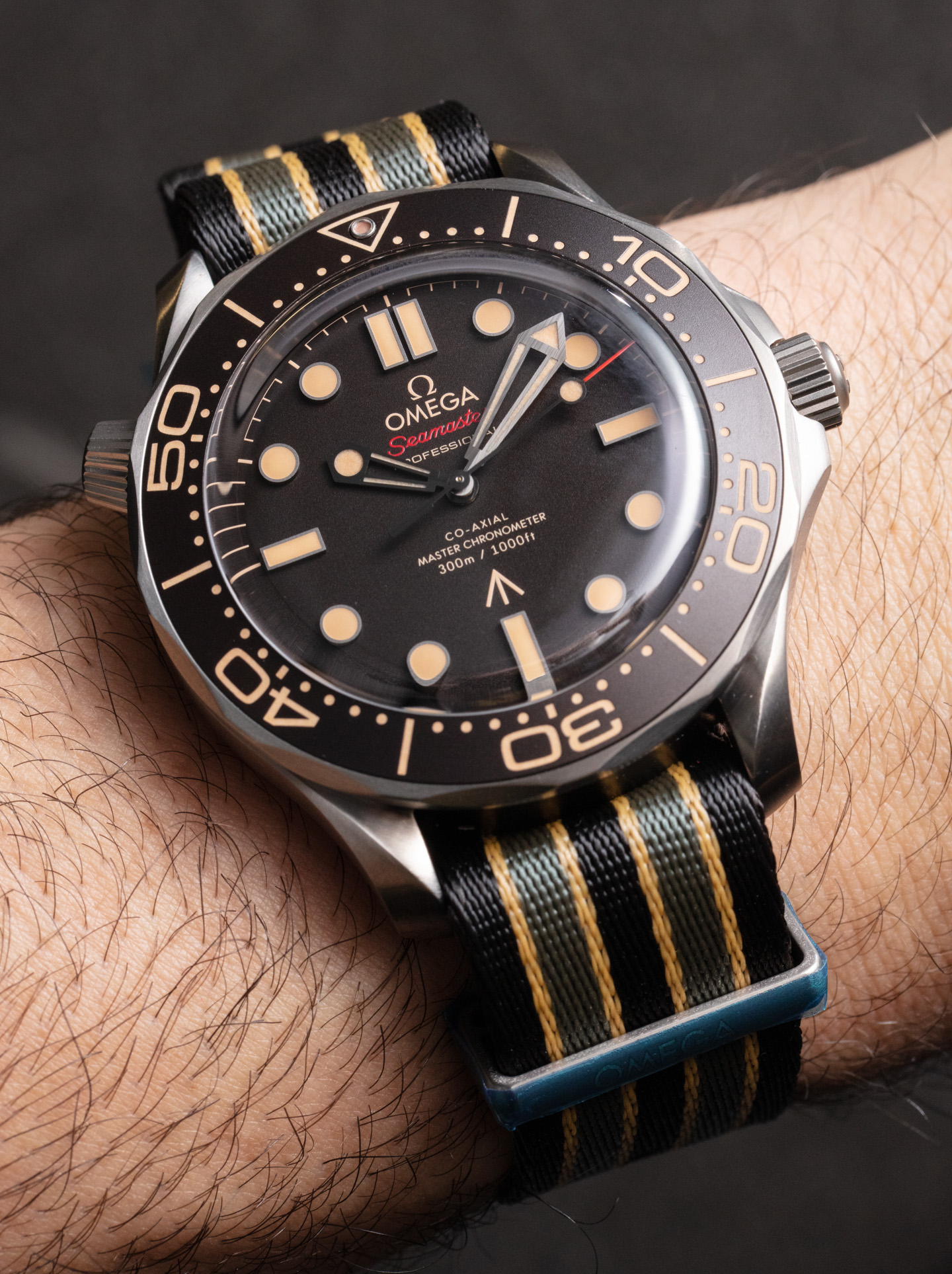 Along with many things in life, the latest James Bond 007 movie was delayed due to the pandemic after it was originally meant to be released in 2019. That is why our original aBlogtoWatch debut article about the Omega Seamaster 300M 007 Edition “No Time To Die” watch was back in 2019. Now, in the fall of 2021, the latest James Bond story, No Time To Die, has been finally released, and it is another remarkable film in the longstanding series. After some time with the watch, as well as seeing the film, I now offer my perspective on this particularly desirable variant of the latest-generation Omega Seamaster 300M.

Omega watches have been an official part of the James Bond 007 franchise since the early 1990s — through nine 007 films. No Time To Die was particularly emotional for everyone involved because it is the last 007 movie to feature actor Daniel Craig as the 007 James Bond. If you haven’t seen the movie, I just want to warn you now that I will discuss some spoilers, since it is really hard to discuss this reference 210.90.42.20.01.001 Seamaster 300M 007 watch without mentioning key plot elements of the movie. That’s the first thing you need to know about this timepiece. It isn’t just another limited-edition 007 Omega watch, but rather the exact product worn by Daniel Craig in the film while playing James Bond. This isn’t the first time  Omega has produced a commercial watch worn by Mr. Craig in the film (that was in 2015 with the Omega Seamaster 300 Spectre — aBlogtoWatch hands-on here), but this is apparently the first one that Daniel Craig himself really hand a hand in creative-directing. So, in addition to being the latest James Bond 007 watch, it is one that was designed with very specific feedback and guidance from Craig. For this reason, I personally refer to the Seamaster 300M No Time To Die product as the “Daniel Craig edition.” 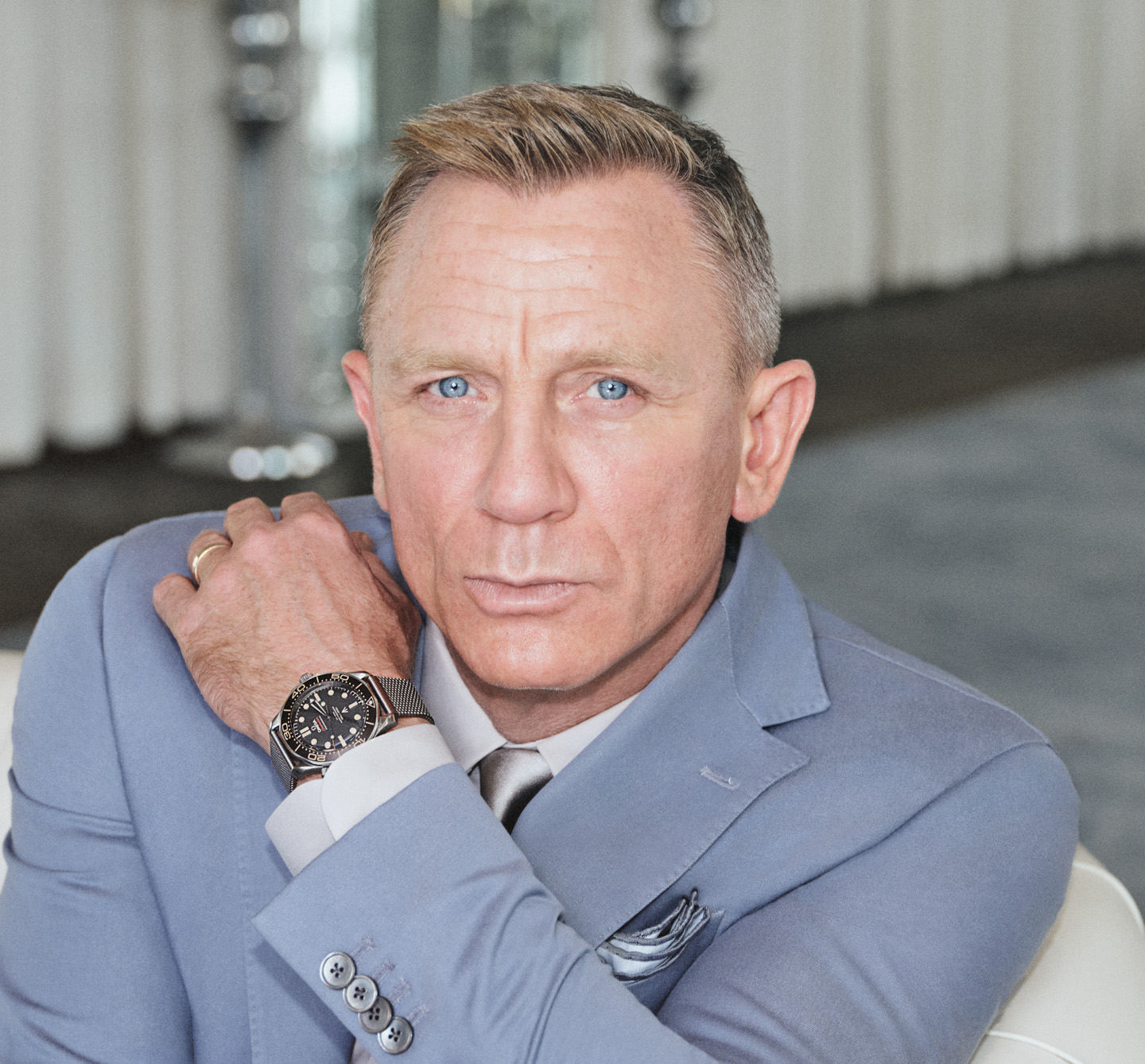 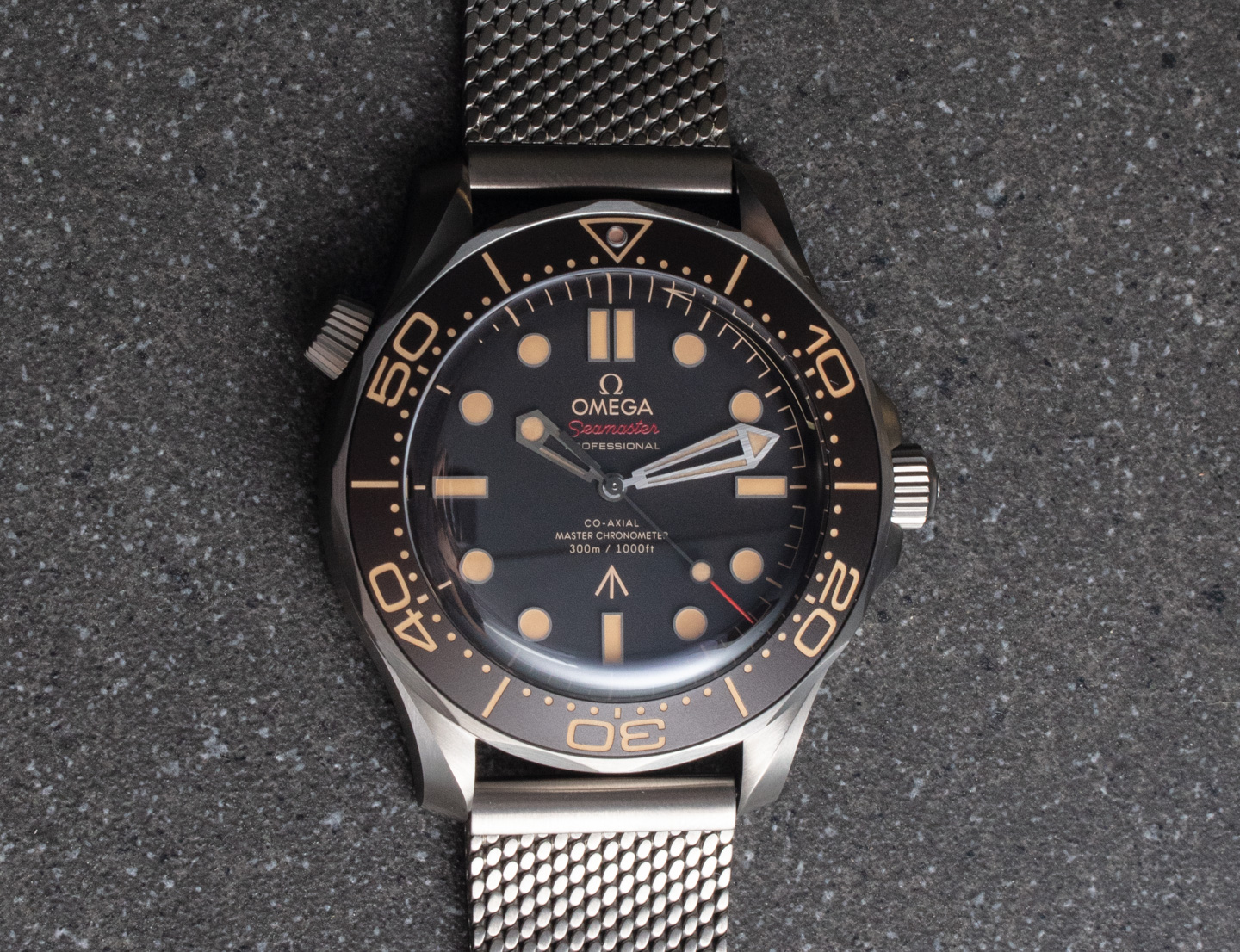 Omega invited us to watch No Time To Die with them here in Los Angeles, and, as a special treat, Daniel Craig showed up, along with Omega’s CEO Raynald Aeschlimann. It was explained that when it came time to design a new watch for the next 007 film — which back then was known to be the last featuring Daniel Craig — Omega apparently wanted to make a James Bond watch as Daniel Craig felt it should be. Craig became a watch lover as part of his relationship with 007, and he wanted a timepiece that evoked a classic military watch feel, akin to what Ian Fleming (the creator of James Bond) would have imagined for James Bond. Fleming was in the Royal British Navy, so the direction of the product focused on a modern timepiece that appeared as though it was a vintage British military watch. Ironically, Craig recently became an honorary member of the British Navy on account of his performance as James Bond. The  Omega Seamaster 300M No Time To Die watch was meant as something worn by someone who was in the British Navy (i.e., James Bond), and then the actor who plays the character who wears the watch becomes “part” of the British Navy. So, that turned out quite nicely for all parties involved. 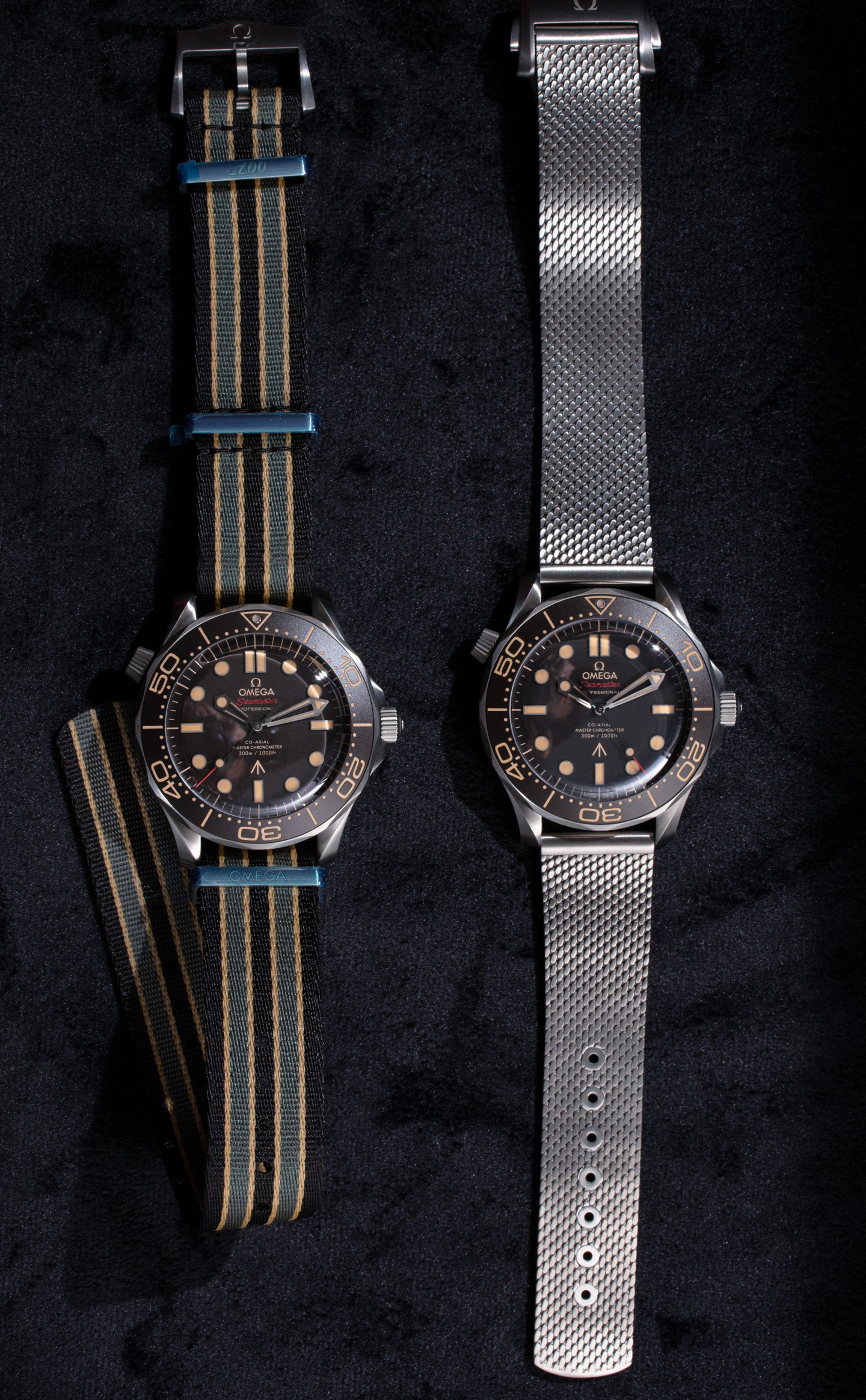 At the same time as wanting the No Time To Die watch to look slick, Craig was very interested in increasing the wearability of the watch. He was correct to argue that James Bond needed something lightweight and highly secure given all the action scenes. Omega managed to really get the weight down by rendering the watch in grade 2 titanium (first fully titanium pieces for this generation Seamaster 300M) and also managed to make the watch appear thinner by changing the bezel and sapphire crystal to a more vintage-style domed effect akin to acrylic crystal watches (but in sapphire crystal, of course — this isn’t a Speedmaster). Note that the “standard” Seamaster 300M models have more flat sapphire crystals. The Curved crystal does increase glare and thus makes the watches harder to photograph, but the real-life effect is to help make the watch look like a more vintage product.

While not everyone loves “fauxtina” lume (coloring the lume to appear as though it has aged), I happen to adore the look of a more brown/tan colored lume as opposed to white or green. The mixture of natural gray titanium, tan-colored luminant, and a slightly browned matte black color for the dial and bezel makes for a very retro style that is nevertheless extremely fashionable. The colors pop out, as well. The 42mm-wide case wears broadly, and the tones of the watch are so apparent on Daniel Craig’s wrist in the latest 007 movie, even when the watch isn’t perfectly in focus. While you don’t need to watch the movie to enjoy this product, seeing the movie really adds a new dimension of fun to the wearing or ownership experience. 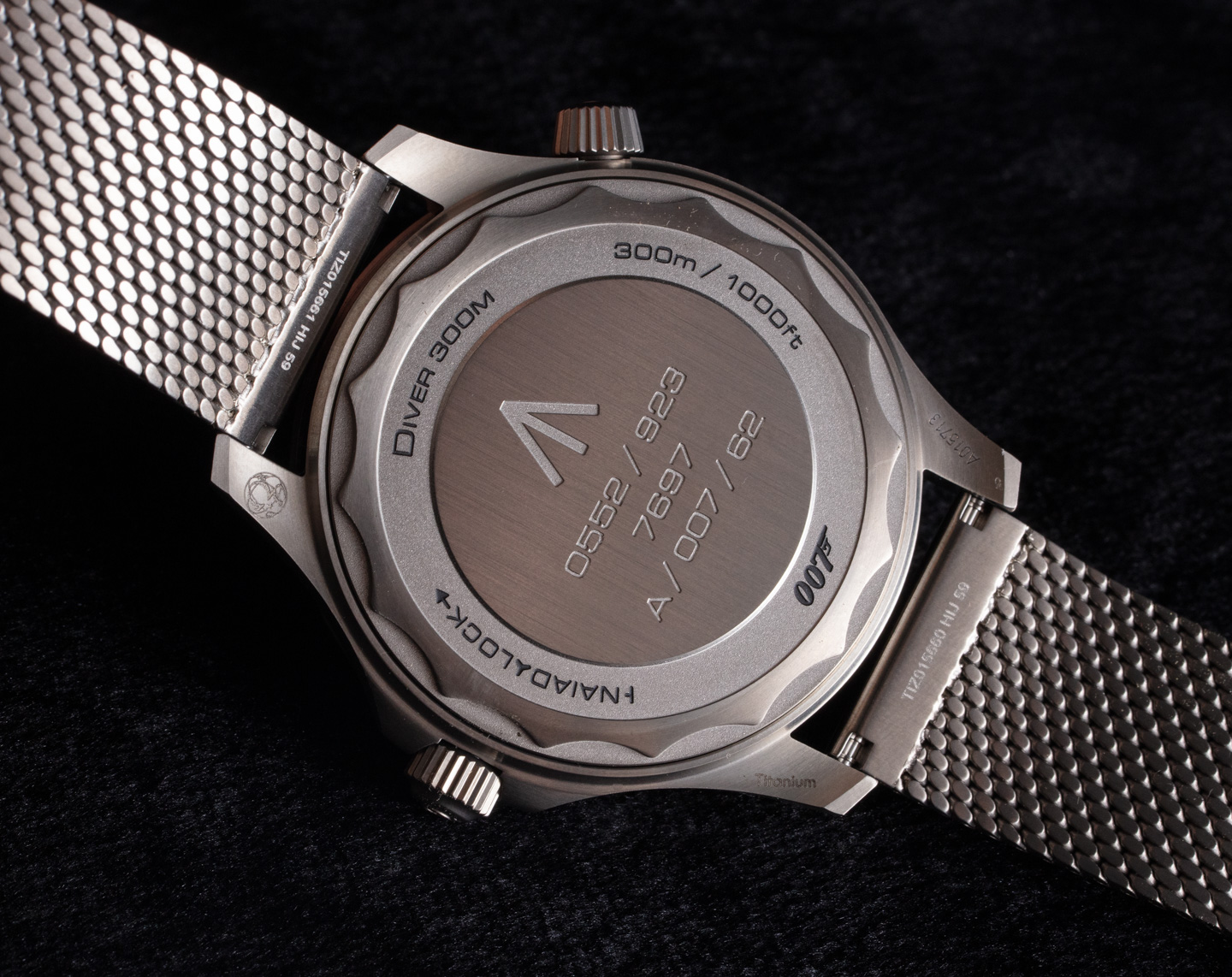 The Seamaster 300M is a diver’s-style sports watch at heart, with 300 meters of water resistance and the distinctive manual helium release valve at the 10 o’clock position on the case. For this model, Omega removes the ceramic bezel insert and actually replaces it with a more old-school aluminum bezel insert. That said, Omega didn’t just want to go backward in time with technology. What Omega explained is that they use a special crystalline coating process as part of or after the anodization process that colors the aluminum. Effectively, this doesn’t make the aluminum bezel as scratch-resistant as ceramic or sapphire but is meant to be a marked improvement over the base scratch-resistance of anodized aluminum. 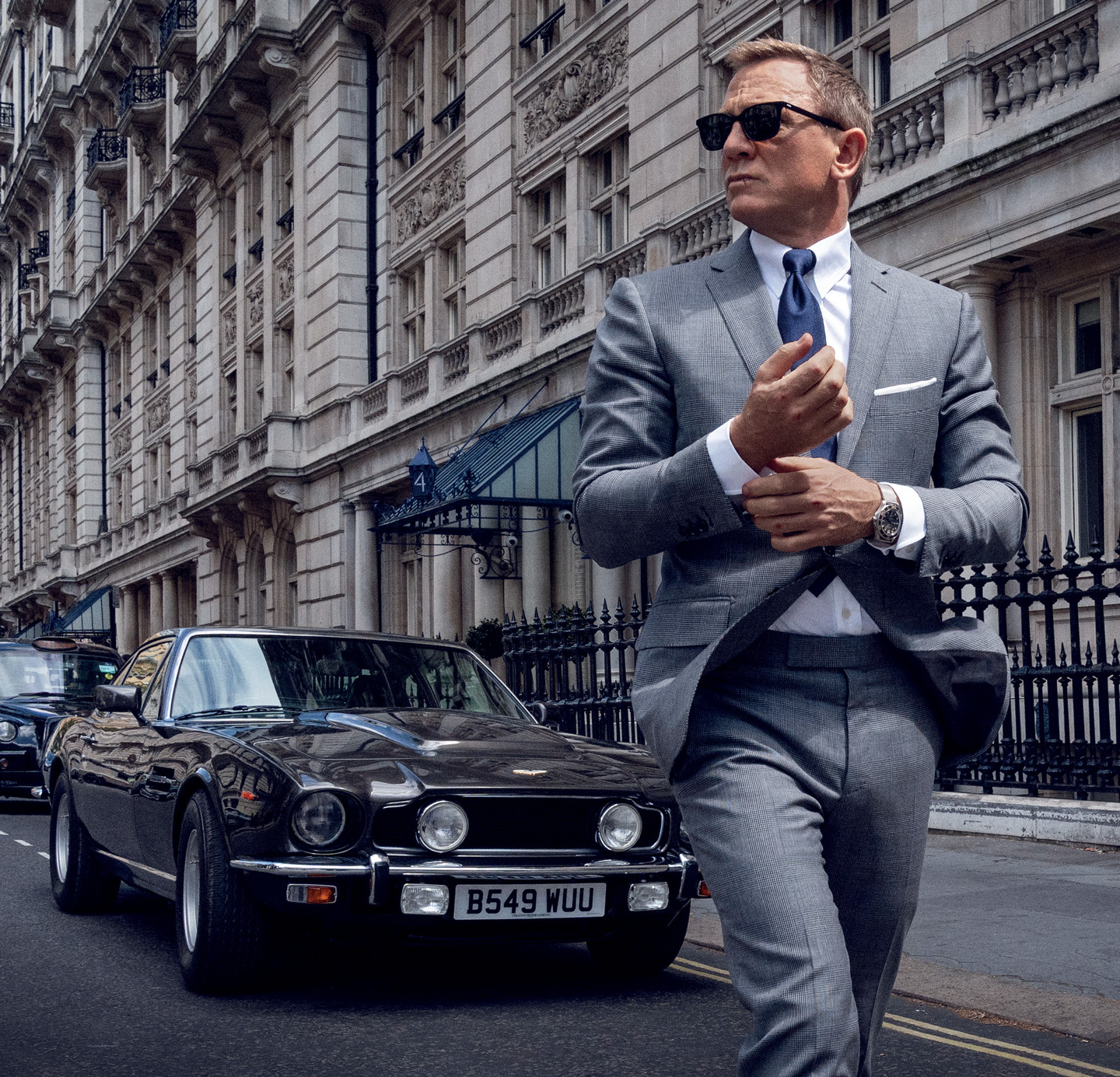 For the movement, Omega goes with its in-house-made caliber 8806 automatic Co-Axial Master Chronometer mechanism that operates at 4Hz with 55 hours of power reserve and includes a silicon balance spring. The movement is also METAS certified, which among other things means that it is highly resistant to magnetic fields. Unlike most modern Seamaster 300M watches with an open caseback, the No Time To Die Edition has a closed caseback with text meant to look like that on an actual military-issued wristwatch or piece of gear. Going back to the dial of the watch, we have a clean, symmetrical face with no date and highly contrasting features. What I really like about the dial (in addition to the eye-pleasing colors) is how it mixes the appeal of a vintage watch with the relatively modern dial elements of the Seamaster 300M that date back to the early 1990s. 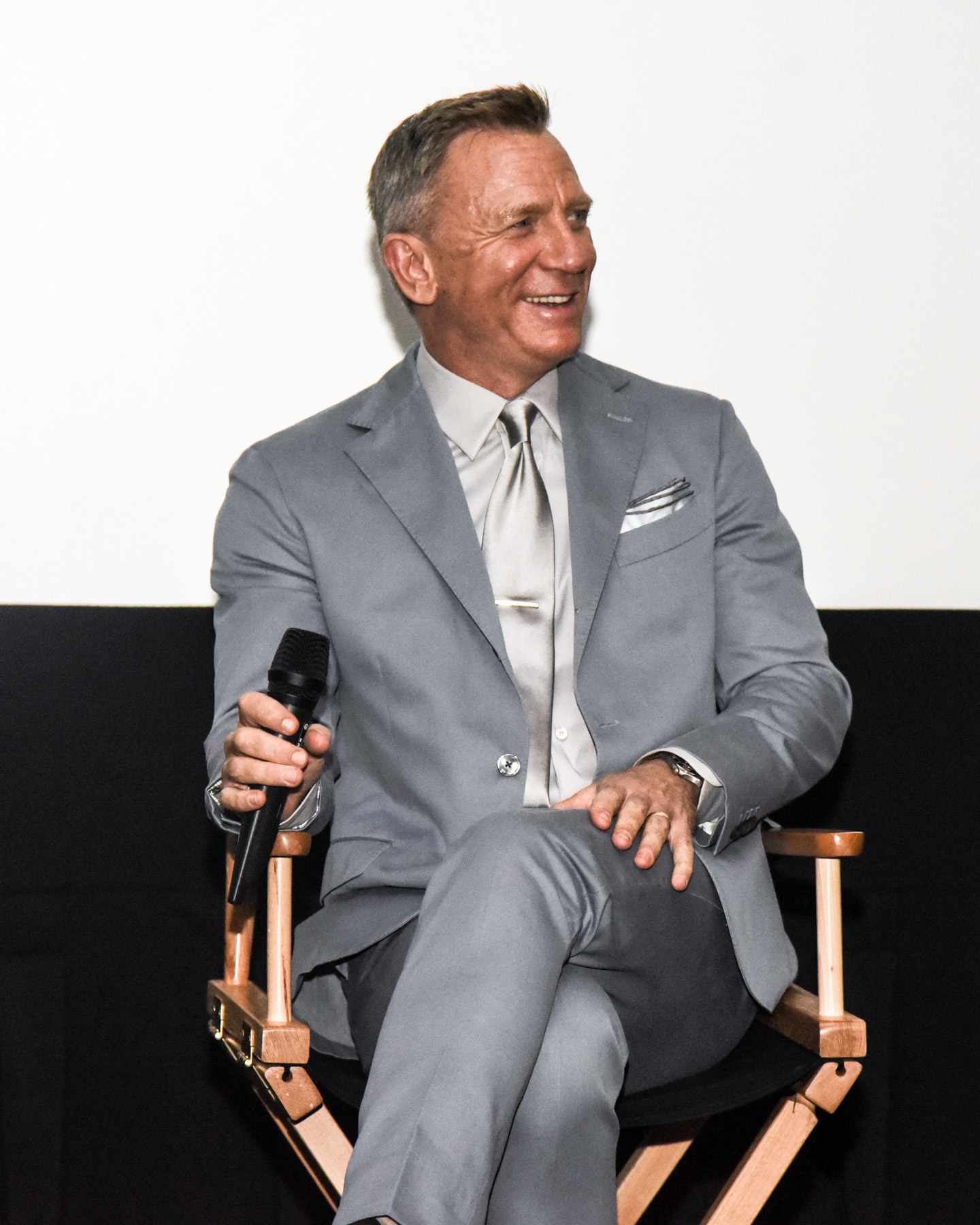 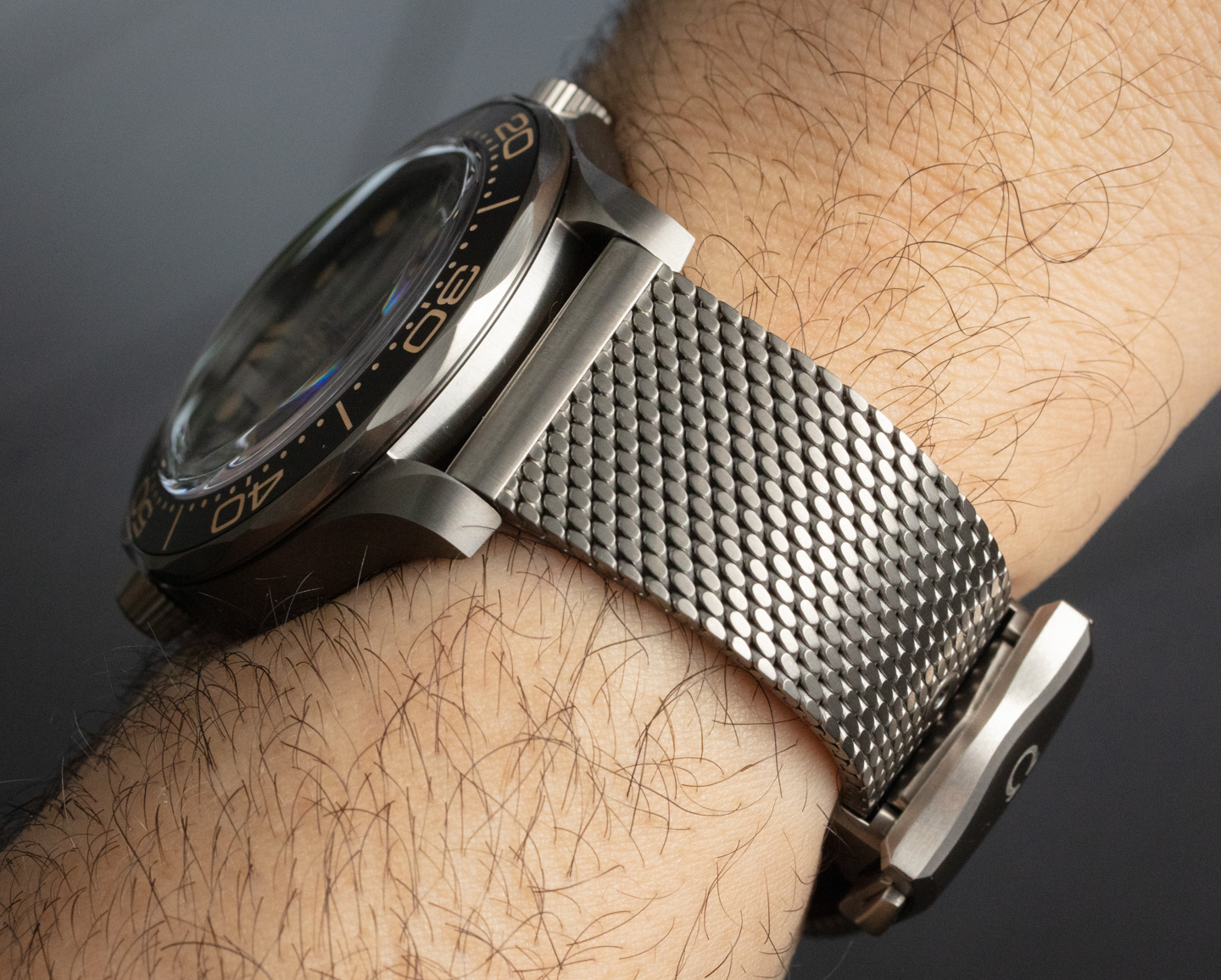 In the movie, Daniel Craig doesn’t just look good in his Seamaster 300M No Time To Die, but it, of course, has a role like his other gadgets. One can further make the argument that the 007 No Time To Die movie, overall, is like one long wristwatch and Omega advertisement. The combination of all the watch shots in the movie, along with plenty of key dialog lines, make for an entertaining cinema experience that very much validates the practices of having a passion for and wearing timepieces as emotional objects.

The most amusing play on mechanical watches in the movie is how Q fits James Bond’s watch with a small EMP (electro-magnetic pulse) device. The idea is that it emits a magnetic shock wave that is so powerful it can disable electronics within a particular range. This is amusing because watchmakers love the idea of older mechanical wristwatch technology beating quartz watches or someone making themselves especially relevant. You can thus imagine the delight of a watchmaker to see James Bond wearing a mechanical watch whose power is to disable modern technology. Just try to ignore some of the plot holes that this particular gadget-use of 007’s wristwatch introduces into the story. 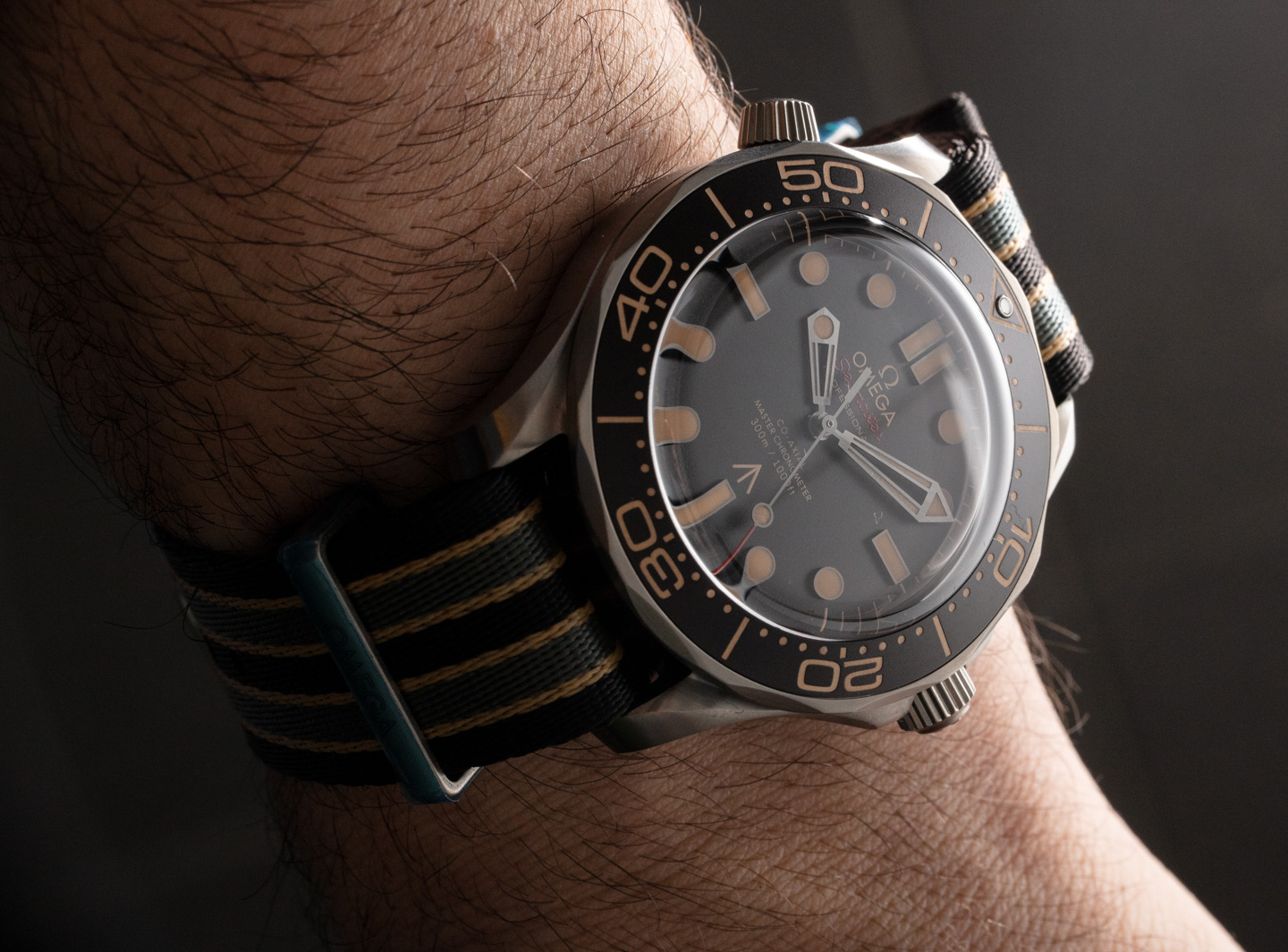 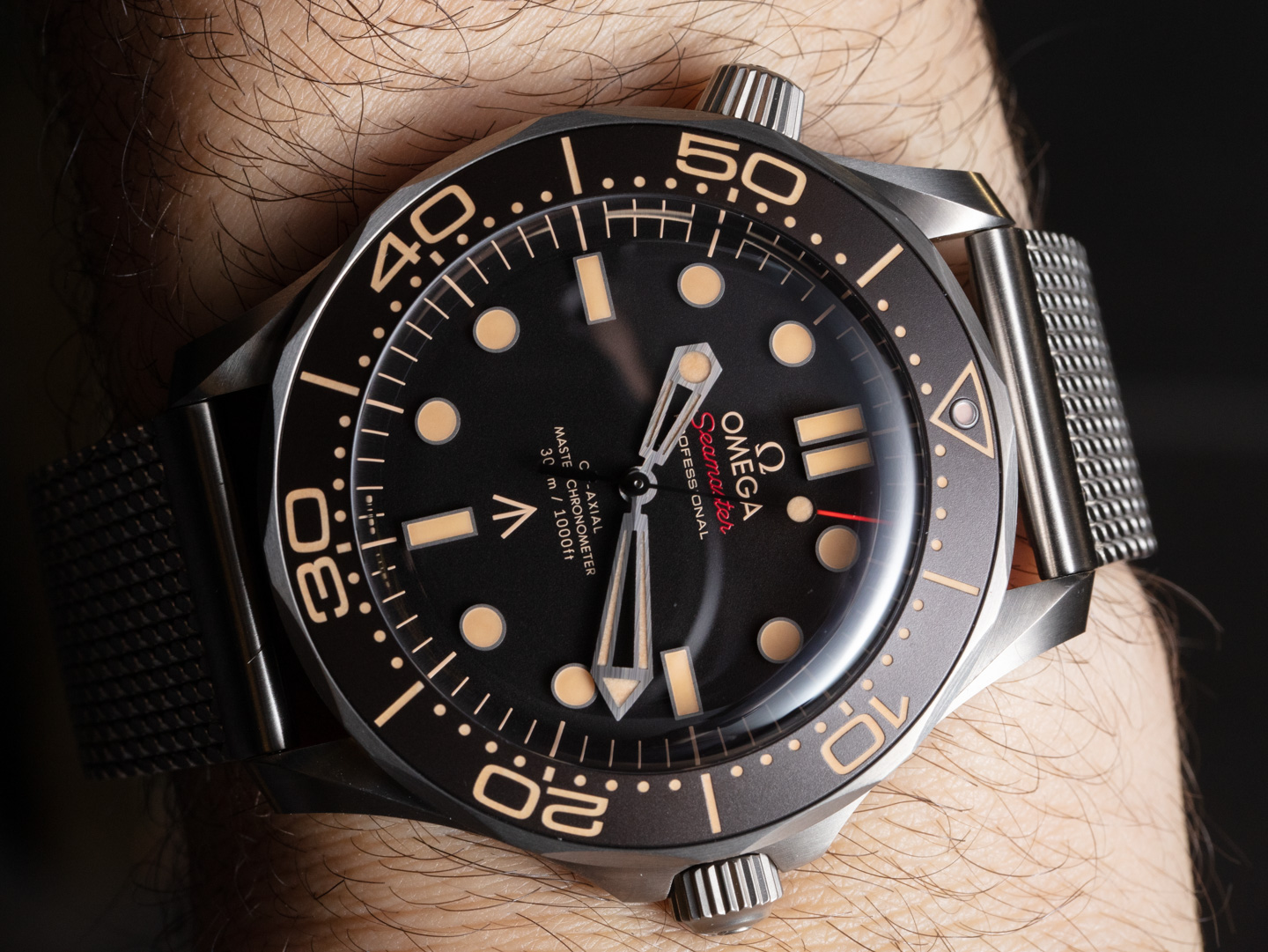 A watch imagined by 007 actor Daniel Craig as his final testament to the James Bond character he played for a number of years, which is prominently displayed in his last film as James Bond, is a great story unto itself. What makes it better is that the final product is very well-done. This would not have been nearly as interesting as a stock Seamaster 300M with different colors. Omega changed the case and dial and added a lot of meaningful details from the case markings to the packaging, which are meant to connect this product with both the No Time To Die movie, as well as for the version of James Bond that was manifested by Daniel Craig. 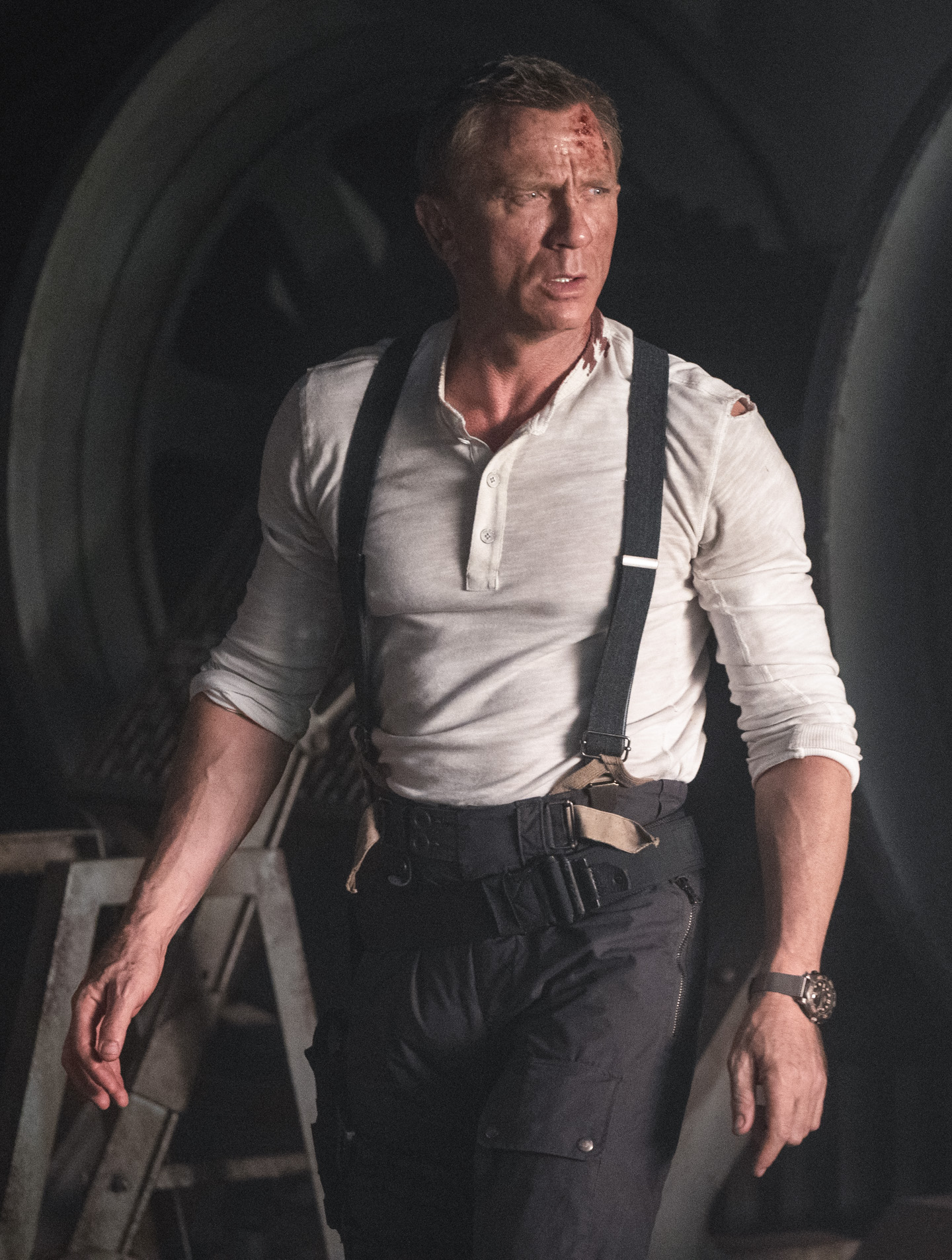 It is hard not to really like this particular 007 James Bond watch, and undeniable how popular these are for Omega as a brand given the business that the Bond connection offers. Omega accordingly takes these products very seriously and has been doing an excellent job of making a product that an enthusiast can love as much as a layperson (with the budget) who really admires the universe of James Bond. Omega offers two versions of the Seamaster 300M No Time To Die Edition, which merely differ in terms of whether they come with a NATO-style strap (inspired by those worn by Sean Connery’s James Bond) or the matching (and highly recommended) titanium Milanese (mesh metal) bracelet. Though to be honest, I really don’t understand why they just sell it with the titanium bracelet and just include the strap as an extra. In any event, they both have the same product reference number of 210.90.42.20.01.001 and are priced at $8,100 USD on the strap and $9,200 USD on the titanium Milanese bracelet. Learn more at the Omega watches website here.