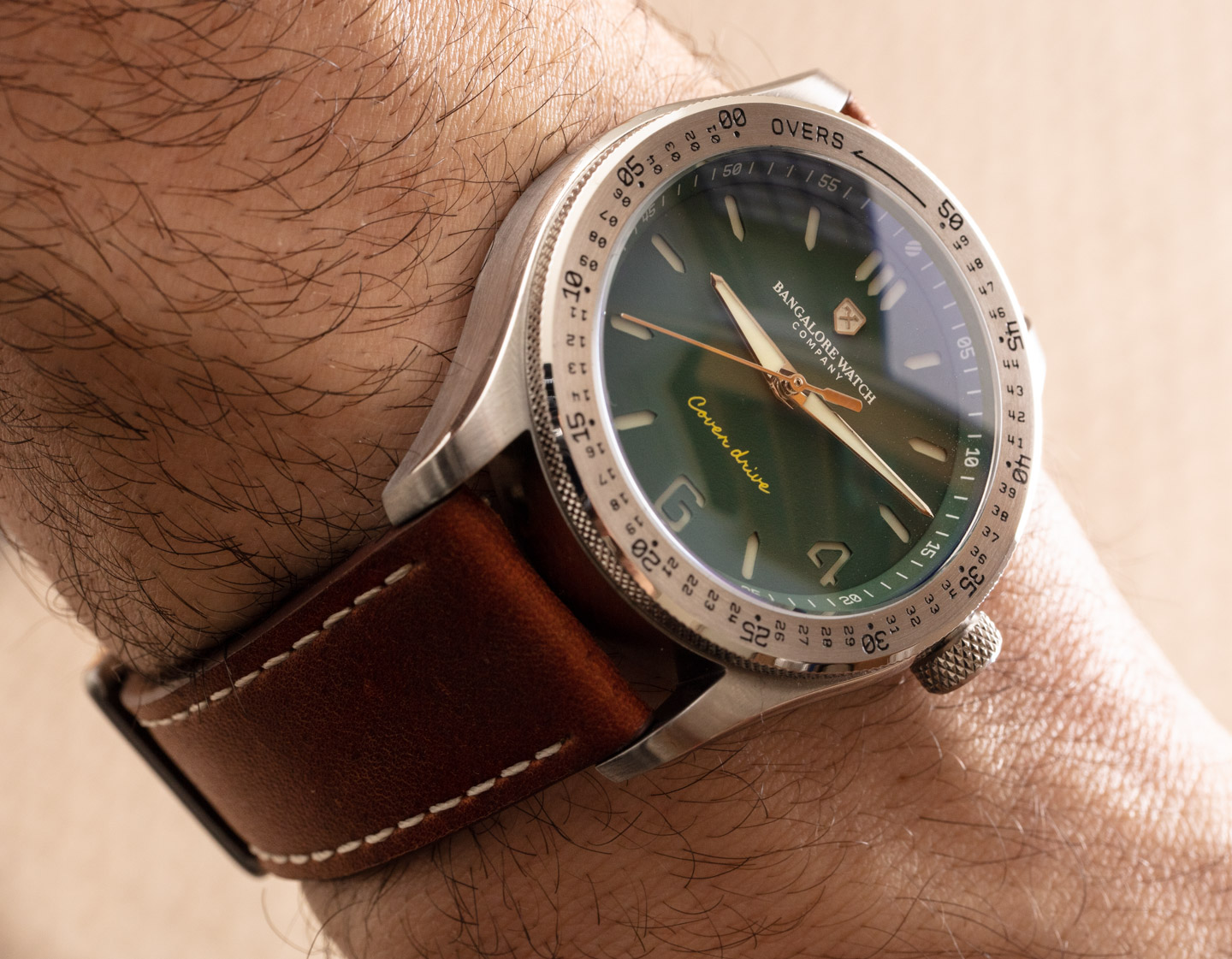 Cricket is a sport uncommon in the United States, and one of the only things I knew about it growing up was that each match was known for taking a very long time to complete and that it looked like a cousin of American baseball. I also knew that it was generally considered a British sport, but that due to colonialism, the sport proved popular in India, where it took on a life of its own. Today, as I understand it, cricket is among the most passionate pastimes in the Indian sub-continent. I had a chance to check out the India-based Bangalore Watch Company Cover Drive timepieces (originally debuted on aBlogtoWatch here).

In addition to being a fan of cricket, I’ve also learned (time and time again) that there is a deep and profound appreciation for timepieces in much of the Indian culture. In the context of today’s enthusiast-run independent watch brands, I’ve been keen to track the impressive development of the Bangalore Watch Company, which tries to combine an interest in timepieces with emotional facets of Indian culture — like Cricket for the Cover Drive watch collection. 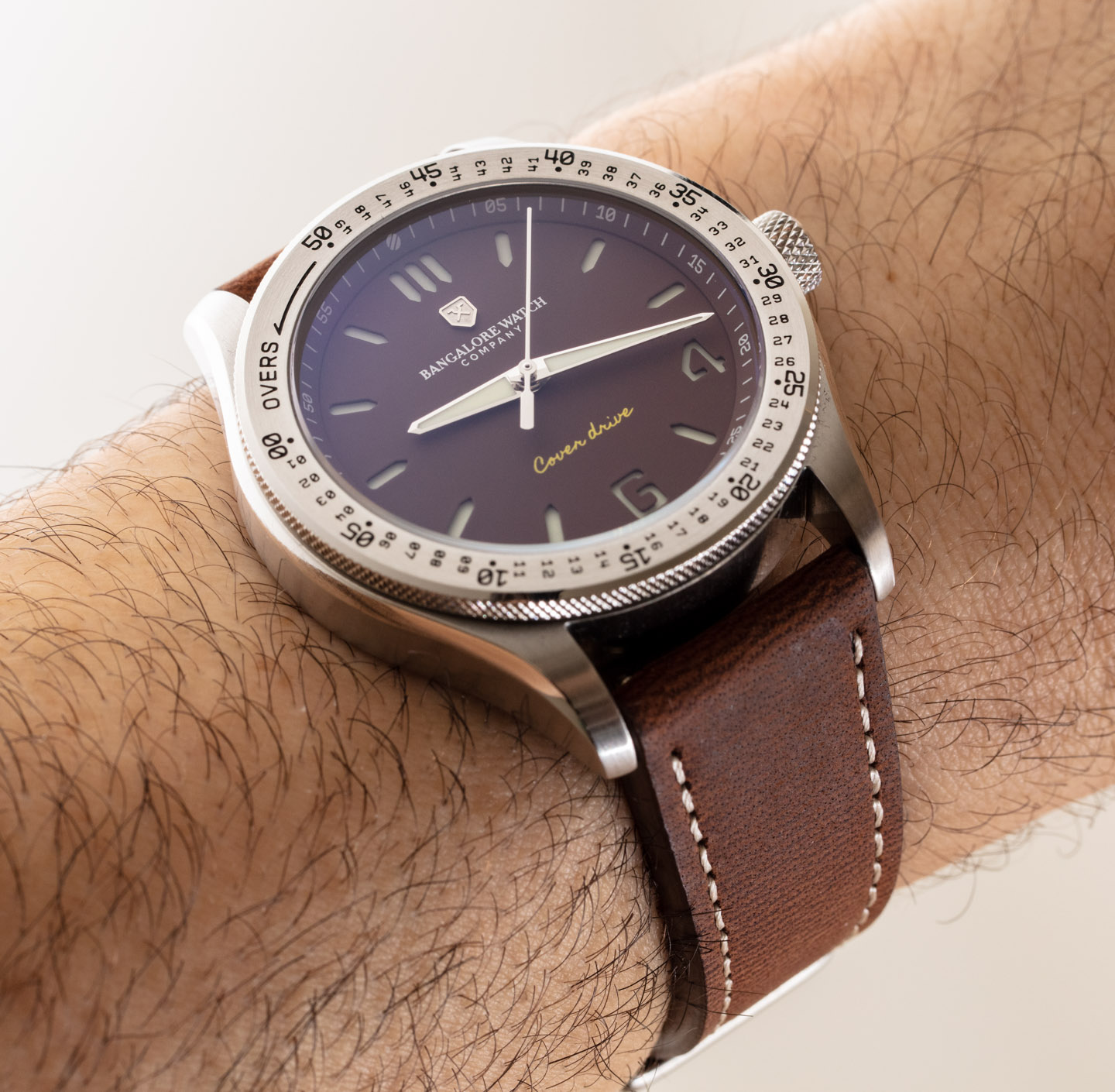 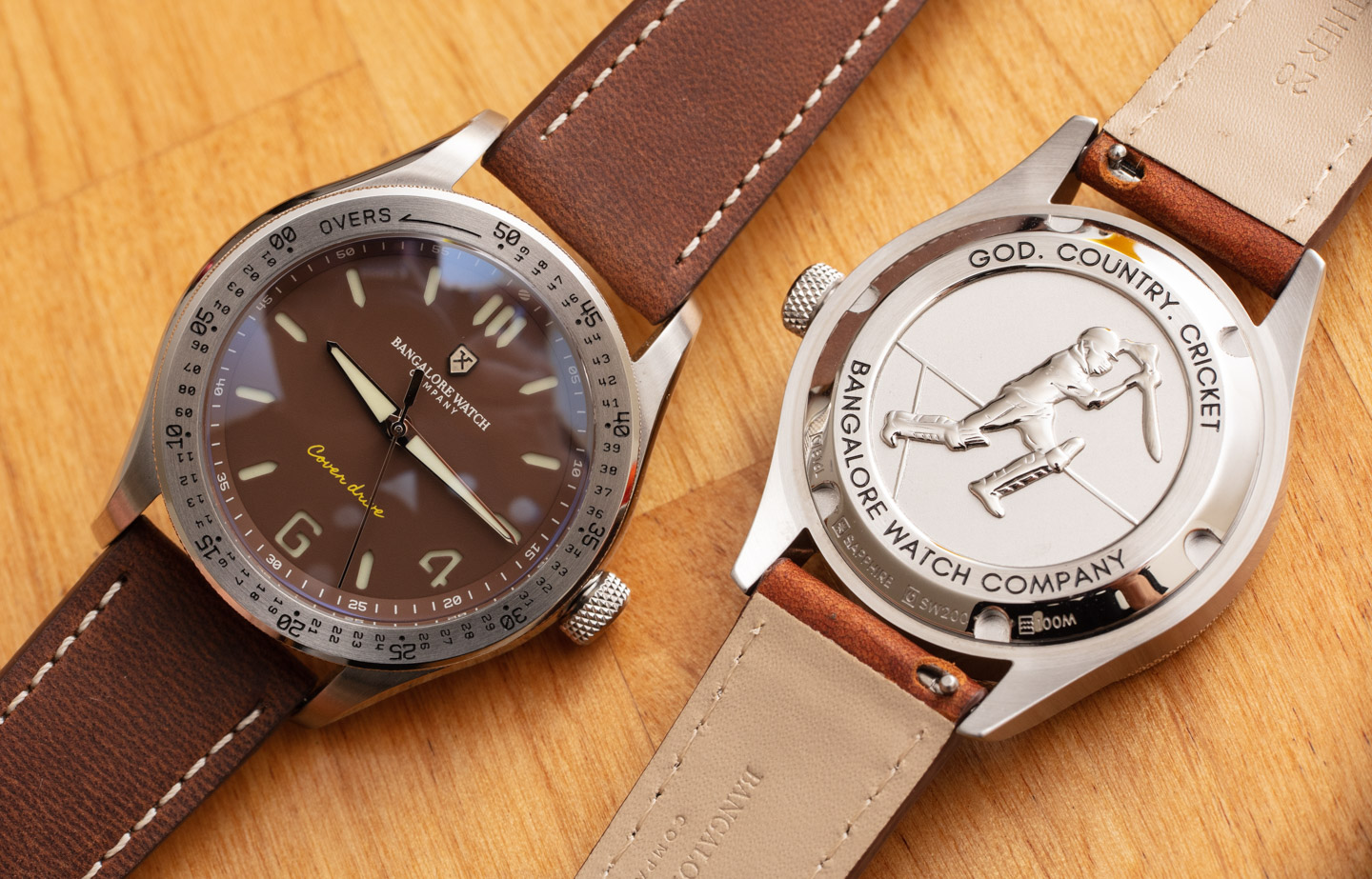 I was fortunate enough to encounter a British national while having a Cover Drive watch on hand, and only then was I able to appreciate the joy that such a timepiece can bring to fans. He happened to be a Cricket fan and was able to better explain some of the small nods to the sport that Bangalore Watch Company included in the design. What is impressive is how many little Cricket details there are in the watch, while the watch itself remains relatively conservative in nature. That is hard to do because most timepieces that “celebrate” a particular facet of society end up feeling like mere souvenirs, as opposed to classy items you’d want to wear daily. Bangalore Watch Company didn’t set out to design a hokey Cricket-themed timepiece that fans could wear while attending games. Rather, they wanted a sensible men’s watch that alludes to an emotional pastime. In that, I think they rather succeeded.

At launch, there are three Bangalore Watch Company Cover Drive watches with sub-names such as The Outfield (green dial), The Pitch (brown dial), and The Pavilion (black dial). The former two are featured in this hands-on article you are reading today. At a glance, nothing about the watch case or dial design screams “cricket” for anyone who isn’t already thinking about the sport. Once you see the “6” and “4” numerals on the dial, the fact that the 23 o’clock hour marker looks like the wicket, and that the counterweight on the seconds hand looks like a cricket bat — then you realize that the designer was seriously trying to send little messages for fellow fans of the popular sport. 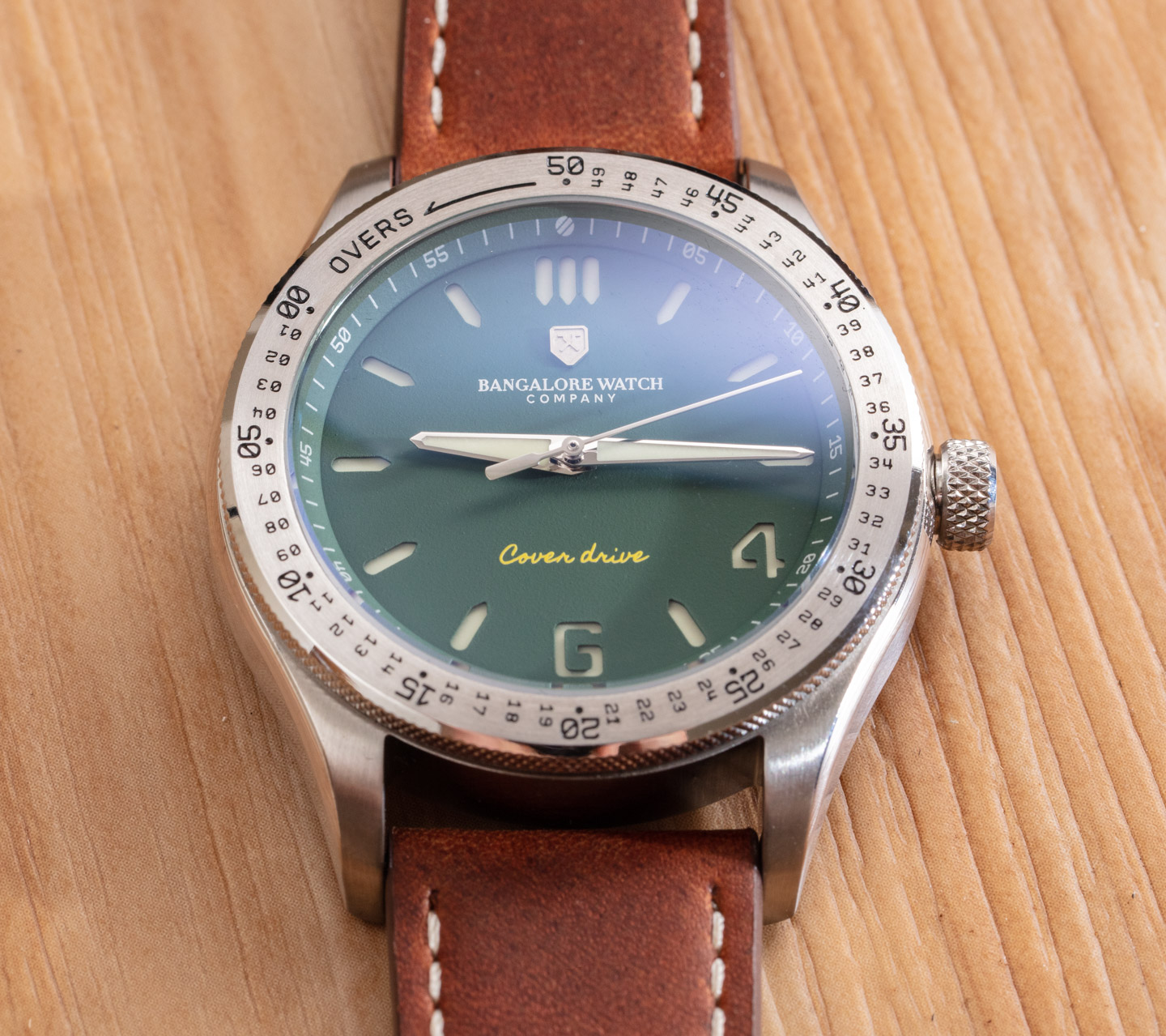 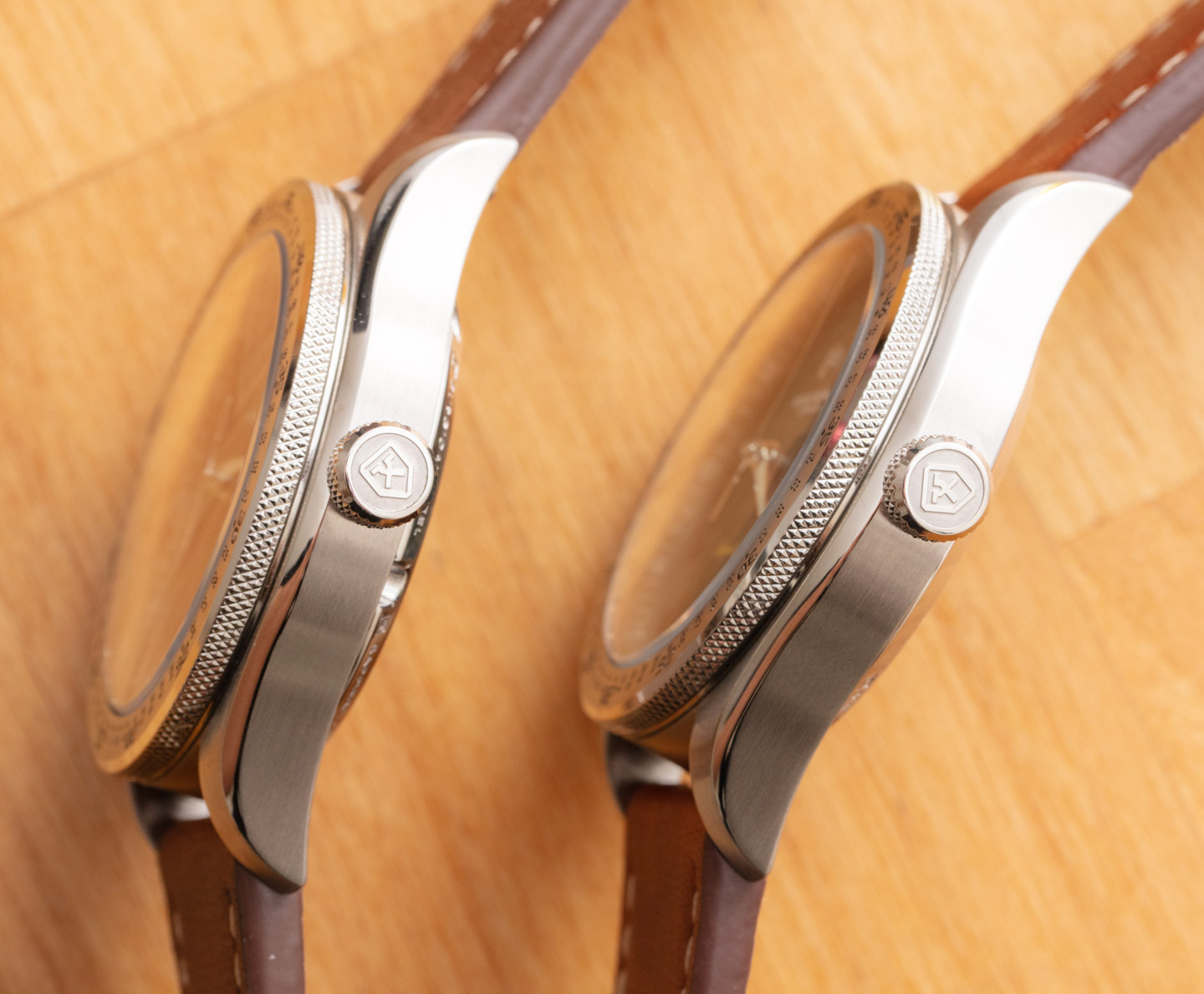 Even the uni-directional rotating bezel relates to the game, with a scale that allows you to track the elapsed time of a “50-overs” game. Of course, the back of the watch has been decorated with an embossed motif of a cricket player playing a shot. “Cover Drive” itself is a term used to describe a particularly desirable play. It would be like calling a baseball watch the “Home Run.” What really defines the Bangalore Cover Drive watches isn’t their cricket, but rather how they take the emotion and elegance of the sport and infuse them into a semi-dress men’s watch. Inside the watches are Swiss Made automatic mechanical Sellita SW200 movements that operate at 4Hz with about two days of power reserve.

The timepieces themselves are legible and comfortable. The Cover Drive watch is 40mm-wide (12.3mm-thick) in brushed and polished steel, with a slightly domed (hence the reflectivity) AR-coated sapphire crystal over the dial, and water resistance of 100 meters. Even though there is a casual/dressy vibe to the Cover Drive watches, they are clearly sporty both in legibility, poise, and durability. Dial luminant volume is impressive as the face construction is “sandwich style,” meaning that an upper face is affixed over a lower layer entirely painted in luminant. Cutouts are made for the hour markers so that the strong luminant shines from below. 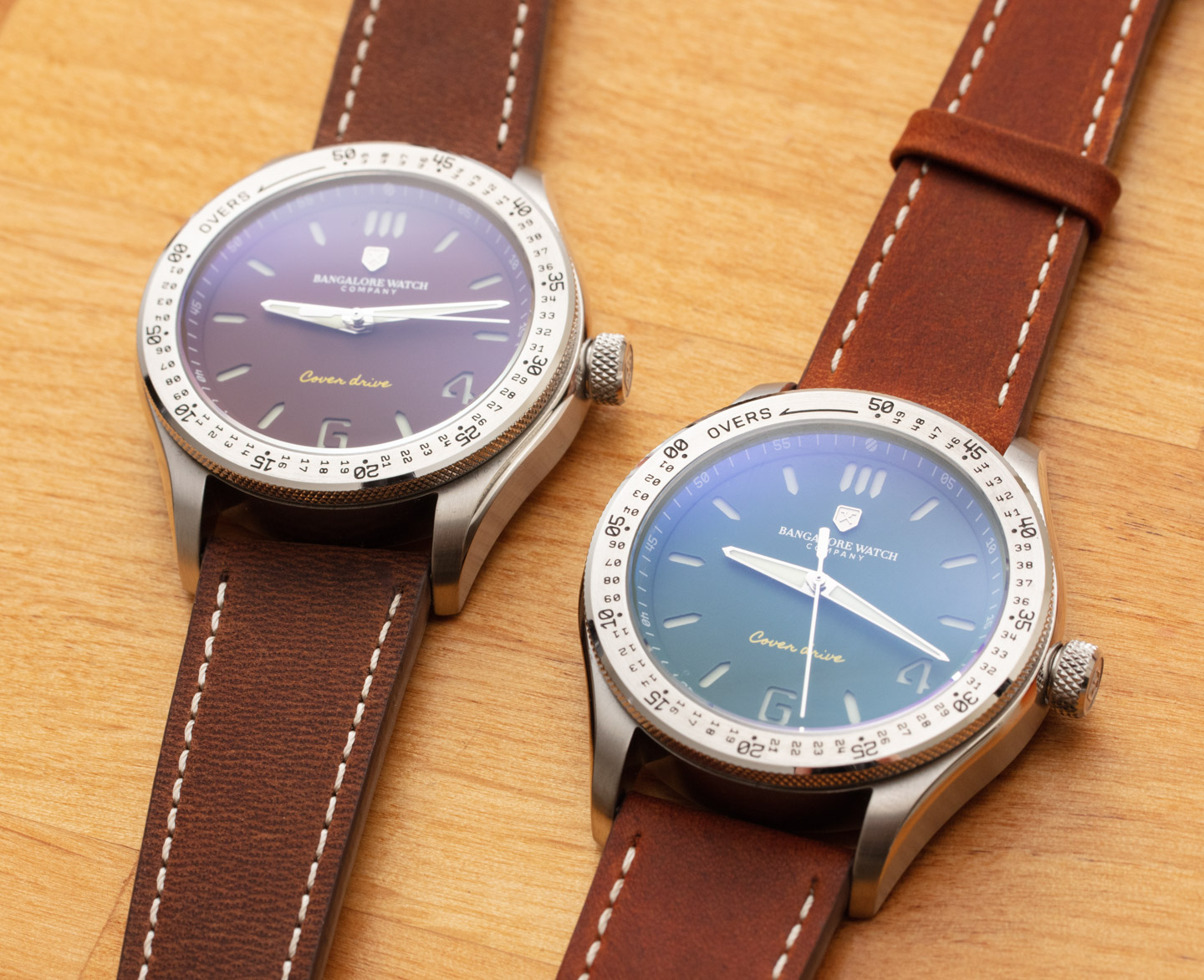 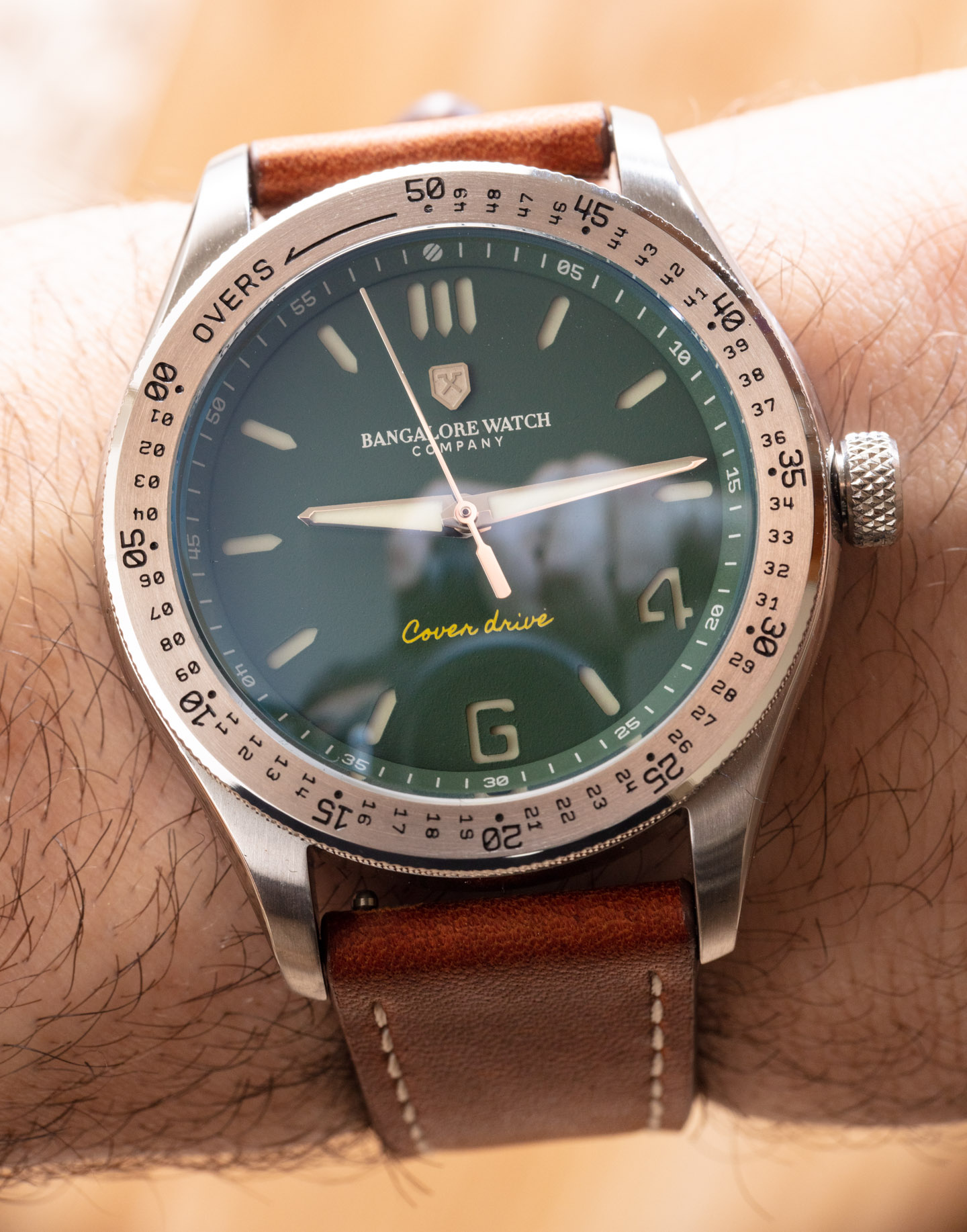